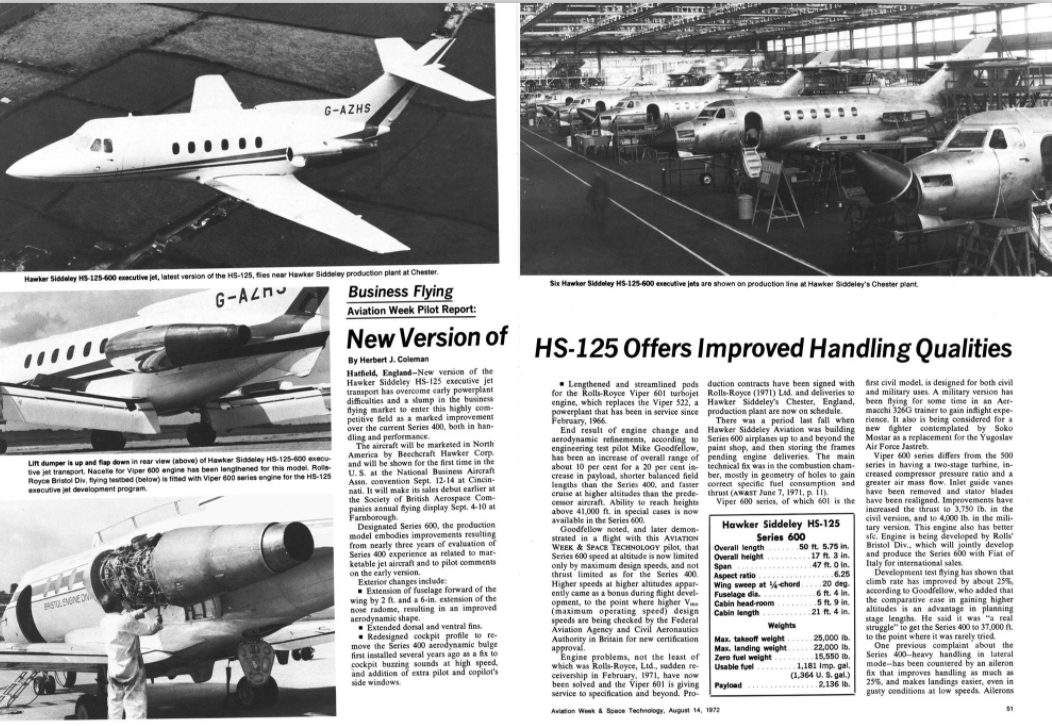 Fifty years ago the Hawker Siddeley Series 600 of the HS-125 was brand new, and was being prepared to be showcased at the National Business Aircraft Assn. the next month after this pilot report was published.

The Series 600, the new version of the Hawker Siddeley HS-125 executive jet had overcome difficulties at the power plant and a slump in the business flying market our pilot and author, Herbert J. Coleman, said as he introduces his pilot report. He gave a complimentary account of his experience as test pilot and was so impressed he said that it was "a marked improvement on the Series 400 both in handling and performance".

During production the aircraft had suffered engine problems due to Rolls-Royce receivership, but Rolls-Royce Viper 601 was working well "to specification and beyond", Coleman wrote. It's fitted with "a thrust limiting device to guard against too much thrust at 11C".

The Series 600 Dunlop brakes had been improved to give less fade at high kinetic energies, and the anti-skid device had been modified. Coleman described the exterior of the aircraft as having an "improved aerodynamic shape", the cockpit has been redesigned, the larger cabin allows more leg room and seats have a recline facility.

Read more about Coleman's experiences flying the aircraft, including how, and why, he attempted a second landing.

If you're a subscriber you can read the full pilot report from the issue of Aviation Week & Space Technology from Aug. 14, 1972 on page 50.

Every issue, every page, every article we have ever published. Your subscription includes full access to the archives, plus current Aviation Week & Space Technology articles (both digital and print packages available).