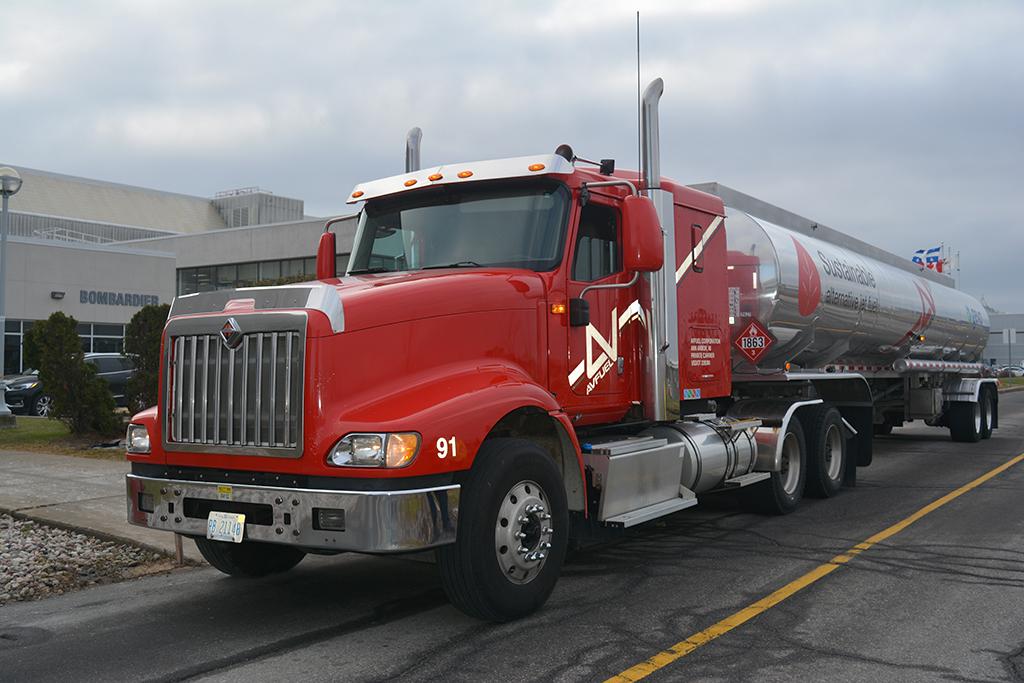 SAF Is on the FBO Ramps

NBAA and half a dozen sister organizations have established the Business Aviation Coalition for Sustainable Aviation Fuel. NBAA has set up a sustainable flight accreditation program “to further advance a sustainability culture in business aviation.”

Global fuel suppliers like BP, Neste and World Energy have mounted SAF–sustainable aviation fuel–initiatives. SkyNRG in the Netherlands wants to change the aviation fuel landscape for the greener. On-the-tarmac providers like Avfuel and Signature are on the move.Costs remain high and supplies limited–but FBOs are pumping SAF into business aircraft, today.Photo shows an Avfuel SAF truck for Bombardier in Montreal. “Bombardier flies all of its demo aircraft to events and airshows on SAF,” the manufacturer says. 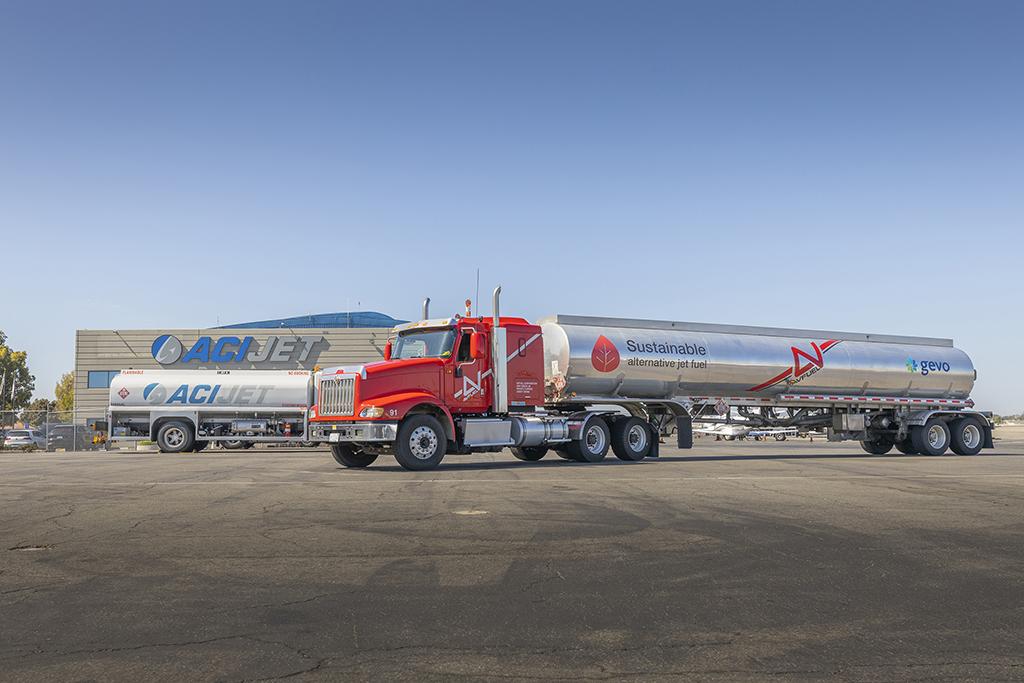 Avfuel late last summer reported delivery of 7,300 gallons of sustainable aviation fuel to ACI Jet at Orange County/John Wayne–and plans for a similar amount of SAF to be split between ACI Jet facilities at San Luis Obispo and Paso Robles, also in California.

The fuel was to be placed in ACI Jet’s general fuel storage tanks, Avfuel said, to be uplifted into any aircraft requesting jet fuel.Avfuel cited “a top priority on moving sustainability initiatives forward for the wellness of our world.” “Sustainability is the new frontier for innovators,” said Andrew Robillard, FBOs and facilities VP at ACI Jet. 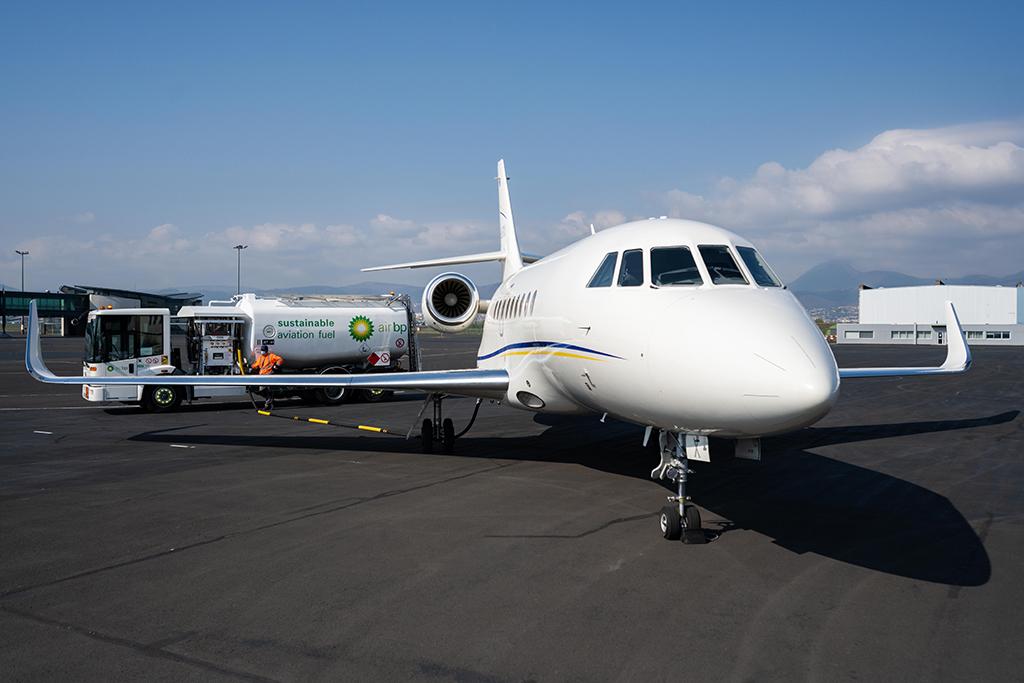 Air BP has chalked up its first sale of SAF at Munich Airport as a business aviation operator began to purchase SAF from the refiner in June. It’s the second location in Germany where Air BP has supplied SAF, the first being in December 2019 at Hamburg Finkenwerder.

The “BP Biojet” SAF supplied by Air BP “is made from waste-based sustainable feedstocks such as used cooking oil,” the refiner says, blended with traditional jet fuel. Air BP’s SAF blend is approximately 35% SAF and 65% traditional jet fuel.Air BP says it was the first ever to provide SAF to an airline–in 2008–and has since supplied SAF to more than 20 airports.The firm’s latest news is an agreement to supply SAF at al of its outlets in Spain. “Air BP’s key business aviation customer, NetJets Europe, became the first to purchase the fuel starting from the beginning of July.”The announcements for Munich and Spain follow Air BP deals to supply SAF at Biggin Hill, Hawarden and Bristol Centreline in the UK, and at Clermont Ferrand in France (shown). Air BP says it’s “in continual conversations with customers” to supply SAF in the U.S. 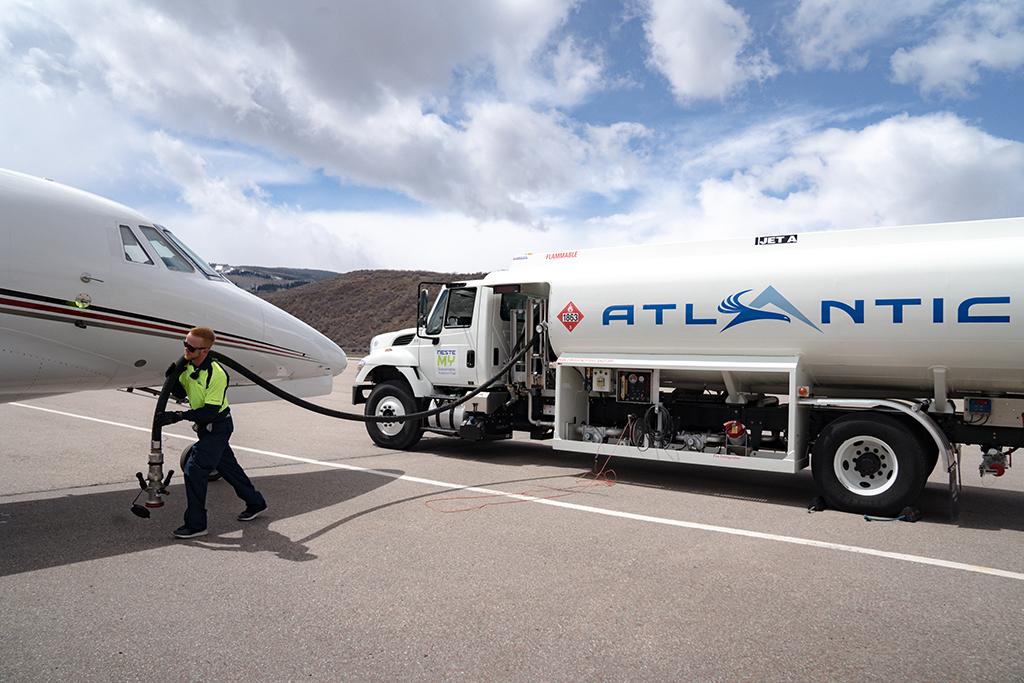 Atlantic Aviation began offering sustainable aviation fuel at Los Angeles International this past March, and followed up with an announcement on SAF at its FBO at Colorado’s Aspen-Pitkin County Airport on Earth Day.

Atlantic Aviation’s SAF is supplied by World Fuel Services at LAX. The fuel “represents the next step in our commitment to renewable energy and the reduction of carbon emissions by the aviation industry,’’ said Atlantic Aviation COO Tim Bannon. “The integration of SAF into our operations is expected to reduce carbon emissions by 10.8 million pounds annually, or the equivalent of the emissions from 1,035 automobiles over the same period,” he said.At Aspen (shown), Atlantic is pumping Neste MY. There, according to Atlantic senior VP Jay Hamby, the company expects to reduce carbon emissions by 800,000 pounds per year. 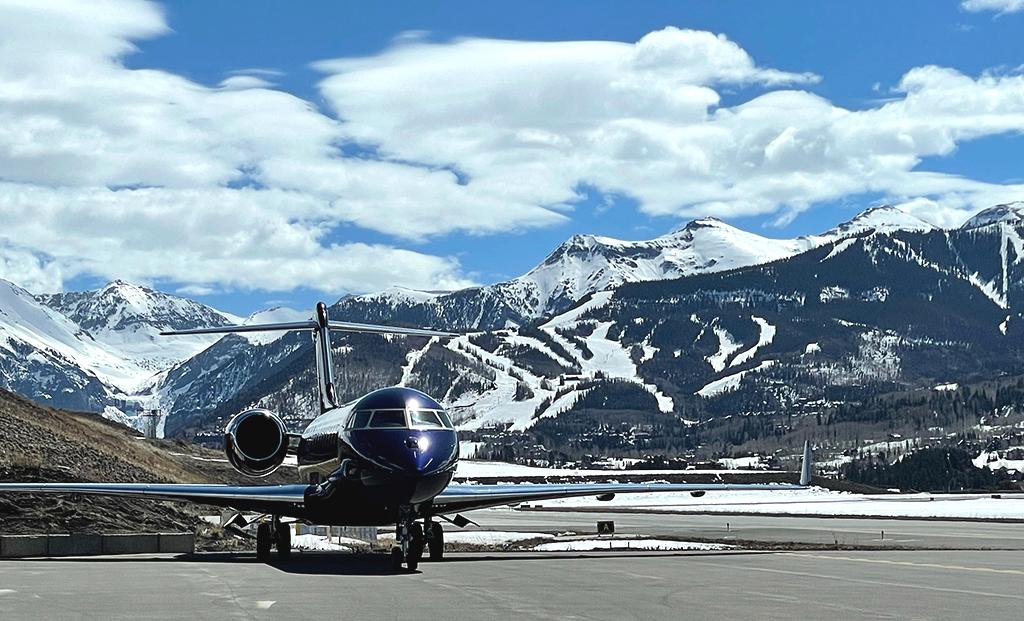 Avfuel SAF in California and Colorado…

SAF-busy Avfuel’s latest development is a partnership to provide a consistent supply of the clean fuel at Truckee Tahoe Airport, noting that the facility received its first shipment of Neste MY in late April. Airport GM Kevin Smith termed SAF “the most effective way to directly reduce emissions.” Truckee Tahoe is an FAA-designated public general aviation airport located some seven miles of Lake Tahoe, straddling the Nevada-California Border. Elsewhere in the West, Avfuel supplies Neste SAF at California’s Monterey Jet Center and at Telluride Regional (shown)–the first FBO in Colorado to it. Avfuel also supplied SAF to aircraft participating in the static display at NBAA-BACE in Las Vegas in 2019.

… and Branches East with SAF for Koury

Avfuel is talking up North Carolina’s Koury Aviation as the first FBO in the eastern U.S. to offer its SAF to general aviation operators. Avfuel’s first delivery (two truckloads) of Neste MY to Koury at Piedmont Triad International took place in early March. “It’s an exciting milestone for Koury Aviation, Avfuel and the industry at large,” said Keith Sawyer, Avfuel’s manager of alternative fuels.

“When we found out there was an opportunity to receive Neste MY SAF from Avfuel, we knew we had to jump on the opportunity,” said Brad Koury, Koury Aviation’s president. 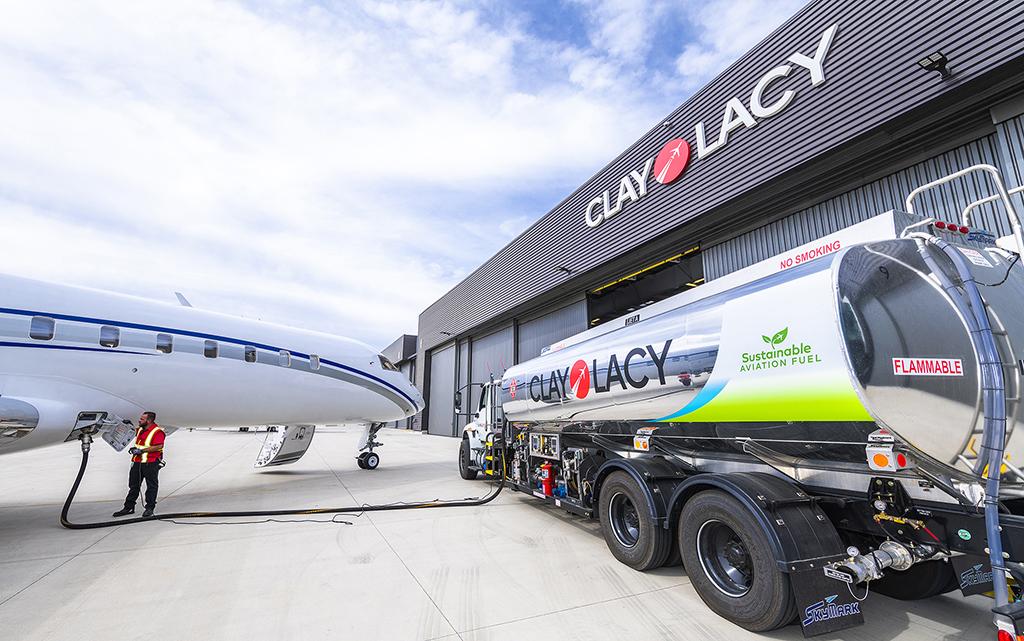 Clay Lacy Aviation announced availability of SAF at its FBOs at Van Nuys (shown) and the John Wayne airport in Orange County in California this past March, and according to operations VP Scott Cutshall will “absolutely” offer SAF at its planned new FBO at Waterbury-Oxford in Connecticut.

Clay Lacy’s SAF is supplied by World Fuel Services, which makes it from inedible agricultural wastes. The FBO services provider is taking monthly deliveries, “with 2021 deliveries to total a minimum of 100,000 gallons.“World Fuel Services has been a wonderful partner in helping us provide SAF to our customers,” Cutshall says.World also supplies RD/renewable diesel fuel to power Clay Lacy’s fuel trucks, GPUs, tugs and other ground support vehicles. 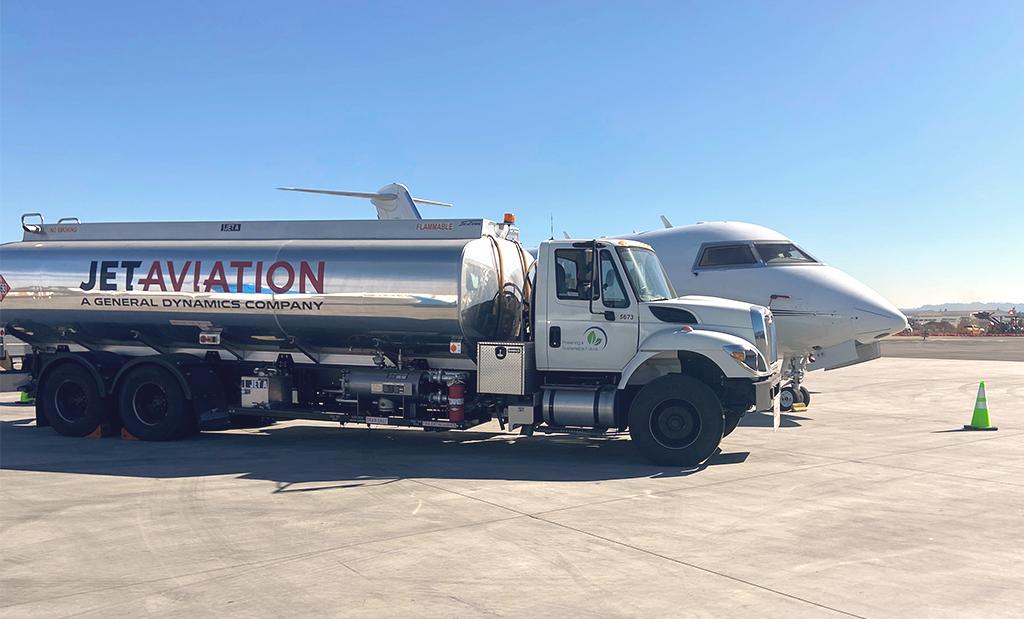 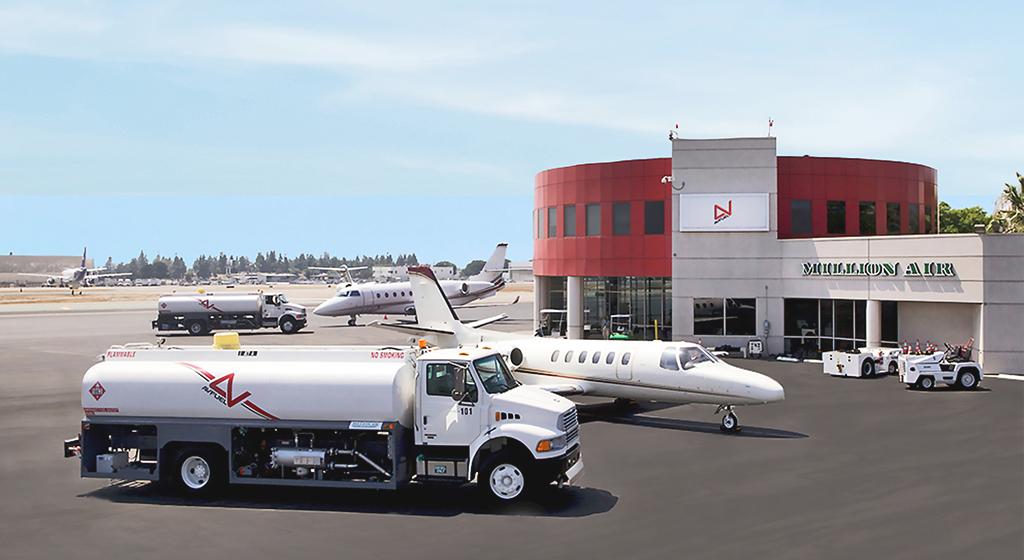 Avfuel is spreading the word this week that it’s extended its offering of Neste MY brand SAF to the Million Air FBO at Burbank, just outside Los Angeles.

“Most of us in the aviation industry have been looking for ways to play a part in the battle against climate change,” said Million Air Burbank GM Priscilla Howden. “When we were given the opportunity to provide SAF to our customers, we jumped on it.”The first truckload arrived on June 24, says Avfuel. “It is so new we don’t have the decals on our trucks yet,” says Million Air marketing director Allison Woolsey.

“Together with the company’s ongoing Singapore refinery expansion, Neste will have the capacity to produce 1.5 million tons of sustainable aviation fuel annually by the end of 2023,” the company says. “Aviation is at a turning point towards a more sustainable future,” said Neste executive VP for renewable aviation Thorsten Lange.“This extension of our SAF production capacity,” he said “will support the aviation industry’s efforts to reduce its greenhouse gas emissions and the climate impact in the coming years.”

Phillips 66 said last year that it will eliminate crude oil feeds at its Rodeo refinery near San Francisco, and instead make products including jet fuel from cooking oil, fats, greases and soybean oils. In April the company disclosed an MoU with Southwest Airlines setting “a framework to explore a future supply agreement” for “Rodeo Renewed” in California. 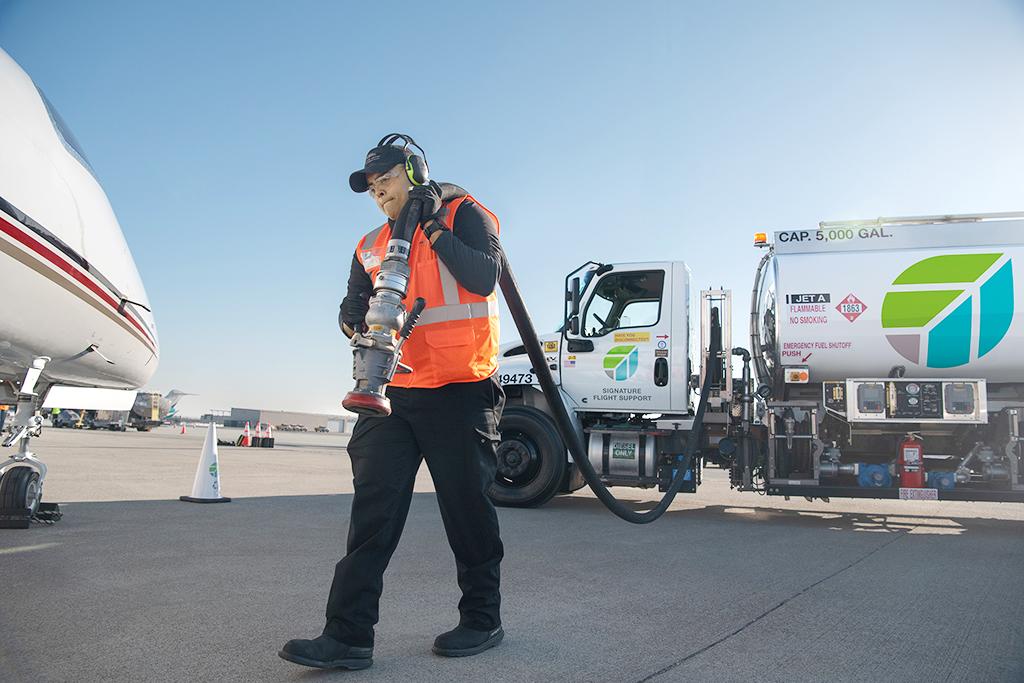 Signature SAF from LAX to Luton

“In addition to being the first Fixed Base Operator to offer commercially available SAF at any airport in the state of Texas, Signature Flight Support is leading the business aviation industry’s drive towards sustainability as the largest network provider for permanent SAF - which now totals nine airports around the world,” the company said in announcing SAF for Austin-Bergstrom.Also with Neste as its SAF supplier, Signature late last year trumpeted SAF availability at San Francisco International and London-Luton in the UK. Signature also supplies SAF to FBOs at Oakland, CA and at Boeing Field/King County International serving Seattle.“Our overarching sustainability program is called Signature Renew,” says a spokesman, “part of our company’s journey towards net-zero emissions by 2030.”“We continue to exhibit SAF growth that can be quantified in the millions of gallons,” said Marty Kretchman, senior VP for operations planning. “To date Signature Renew has prevented thousands of tonnes – not pounds – of carbon dioxide from entering the environment.” 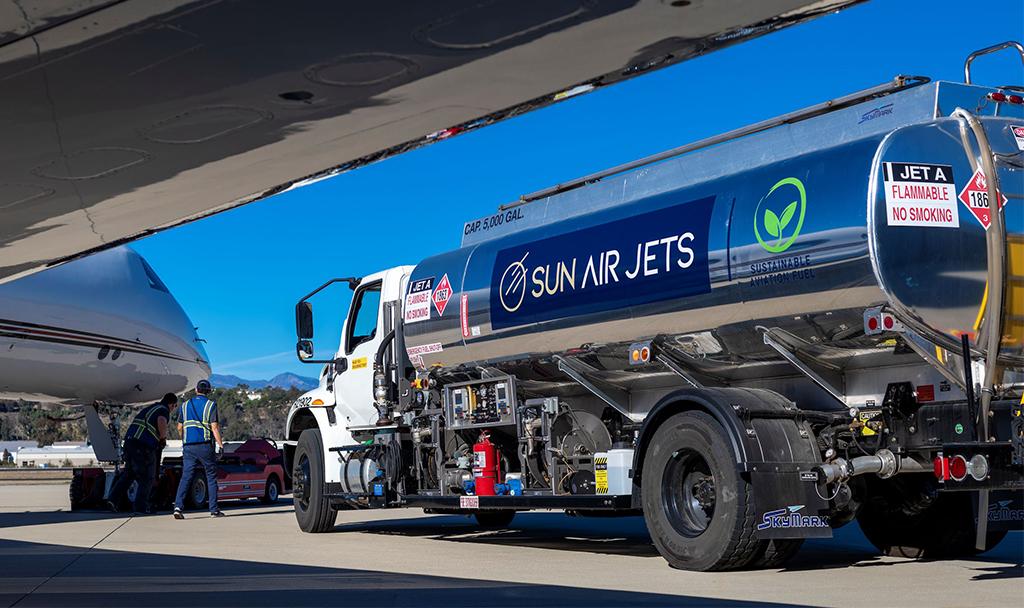 California’s Sun Air Jets, a Signature Select member, said earlier this year that it “will be blazing new trails,” offering sustainable aviation fuel at its FBO at Camarillo in Ventura County–with no price premium.

“Due to a generous donation by an anonymous benefactor, the company will offer SAF at the same rate as conventional jet fuel while supplies last,” the company said.SAF deliveries commenced in March, and the firm says expects to be able to deliver the green fuel at conventional jet fuel prices until March 2022.Sun Air’s SAF is supplied by Signature affiliate Epic Fuels.“Now, more than ever, it is important for everyone to do their part,” said Brian Counsil, Sun Air president and CEO. 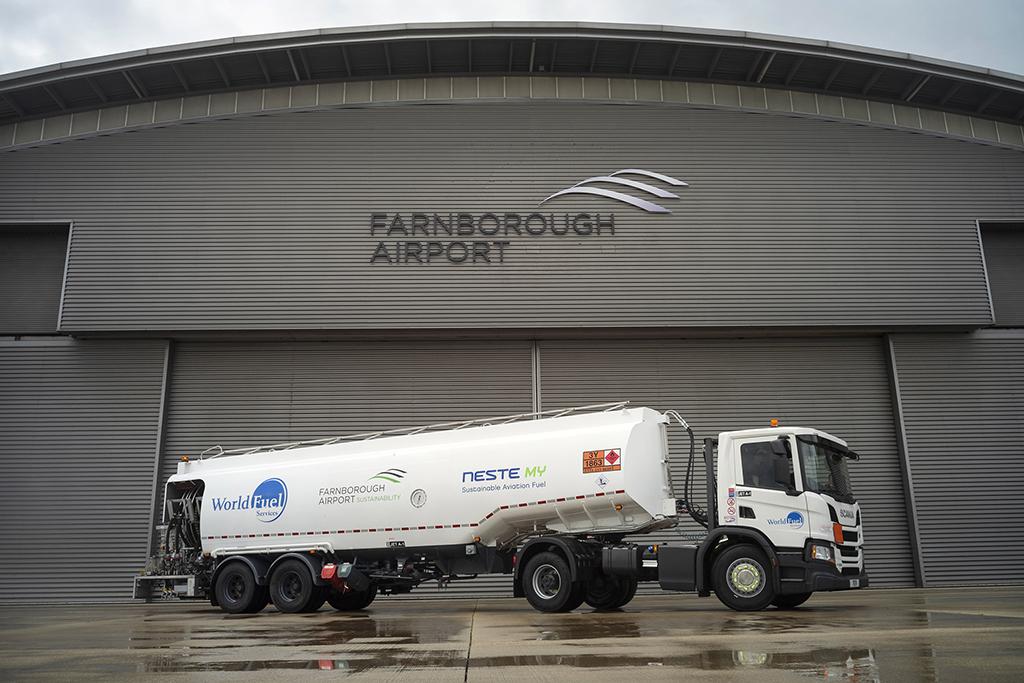 World Fuel Services, which has supplied sustainable aviation fuel at Farnborough for aircraft bound to events like EBACE, is commencing regular supply there starting this month, marking its first transaction with refiner Neste for SAF in Europe.

“The introduction of SAF at Farnborough Airport is a major milestone,” said airport CEO Simon Geere. “We are fully committed to a sustainable future and are delighted to offer our customers the opportunity to make a greener choice.”SAF is “the future of aviation,” says World Fuels parent World Energy, “a drop-in fuel solution that requires zero changes in aircraft or engine fuel systems, distribution infrastructure or storage facilities.” The SAF facility at World’s Paramount refinery in Los Angeles is said to be the world’s first such commercial plant.Immediately pre-pandemic, World orchestrated a scheme with whereby operators departing from Jet Aviation FBOs at Teterboro, Boston/Bedford or Dulles for the January 2020 World Economic Forum in Switzerland could get credit for using SAF physically uplifted by Jet Aviation at Van Nuys, CA–for each gallon of conventional fuel purchased at to East Coast FBOs, an equivalent amount of conventional fuel was replaced with SAF for Van Nuys departures.“In the future, this type of program would enable low-carbon SAF purchases regardless of geography,” said Darren Fuller, World Fuel Services business development VP.In addition to Atlantic Aviation at LAX and to Clay Lacy FBOs at Van Nuys and Orange County, World supplies SAF to AvPorts at Moffett Field near San Jose and to Gulfstream at Van Nuys in California, and to Gulfstream at Savannah/Hilton Head International in Georgia. 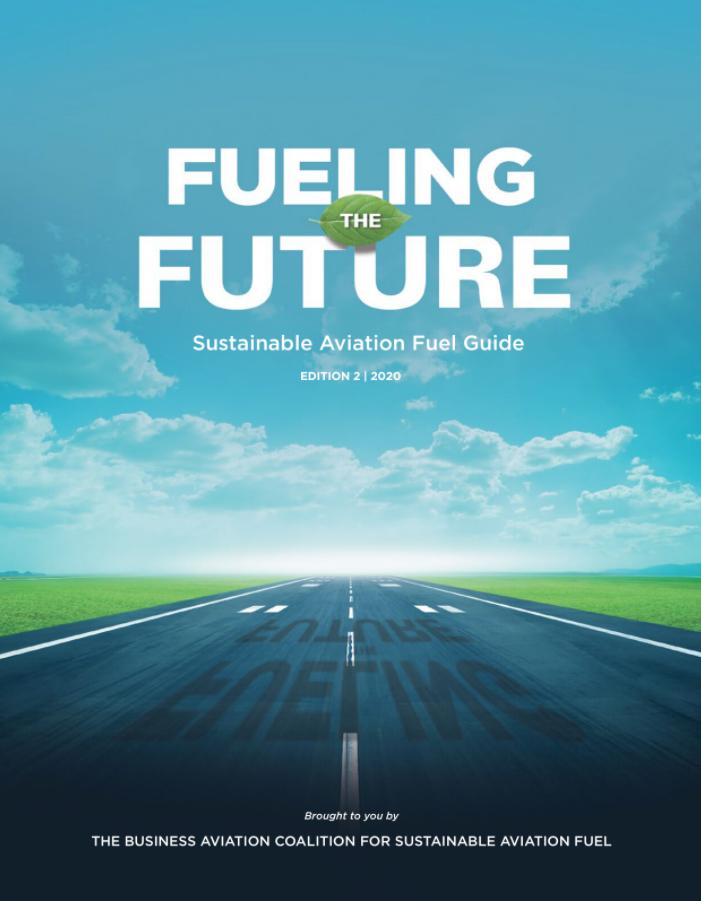 No one will argue that, even for the sake of its image, aviation needs to reduce its environmental footprint. NBAA and half a dozen sister organizations have established the Business Aviation Coalition for Sustainable Aviation Fuel.

Explore the gallery to see how global fuel suppliers like BP, Neste and World Energy have mounted SAF–sustainable aviation fuel–initiatives.