Day 1: The One Week Wonder Tent as seen from the outside, with a finished Sonex Waiex on display. If all goes according to plan, this is what the completed aircraft should look like in one week’s time.

Day 1: The One Week Wonder Tent as seen from the inside. 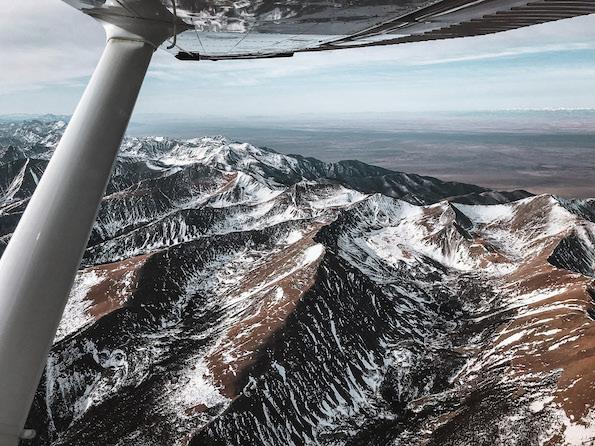 Answer the call of the wild. Learn more at https://cessna.txtav.com/en/piston/cessna-skyhawk

Day 1: Time is ticking. The 7-day clock started at 8am sharp on Monday, July, 25, and hangs over the tent above the volunteers. Due to technical difficulties with the microphone during the kickoff ceremony, Jack Pelton, CEO of EAA and former CEO of Cessna Aircraft, joked the volunteers were already 7 minutes behind schedule!

By the end of Day 1, the resemblance of an airframe is not yet visible, but many parts are out of their cardboard boxes. 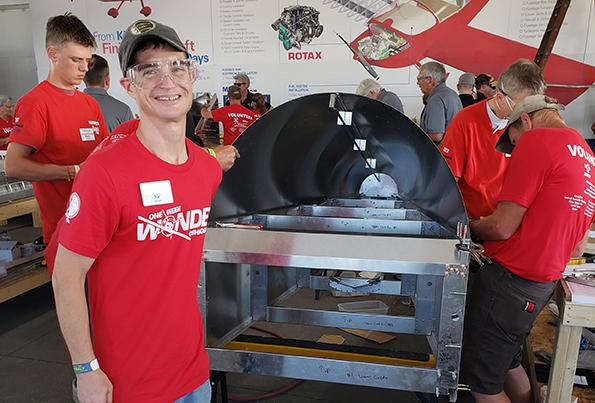 Michael Lavitt/BCADay 2: The fuselage is taking shape with skin panels riveted together. 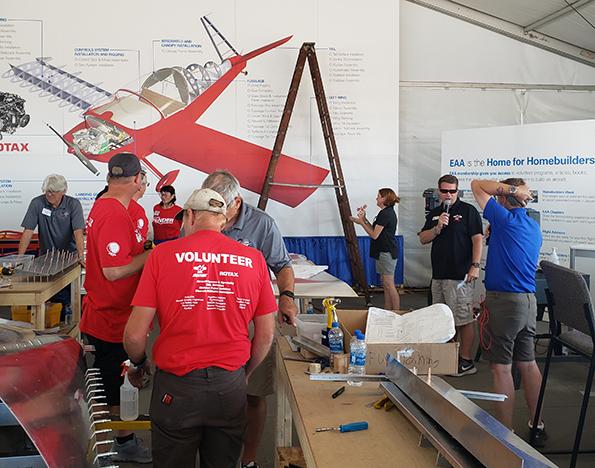 Day 2: The crew that is building the Sonex Waiex tracks progress on the large drawing posted on the wall, sticking colored dots to indicate completed items. At the end of Day 2, crew leader Doug MacDonald says they are ahead of schedule. 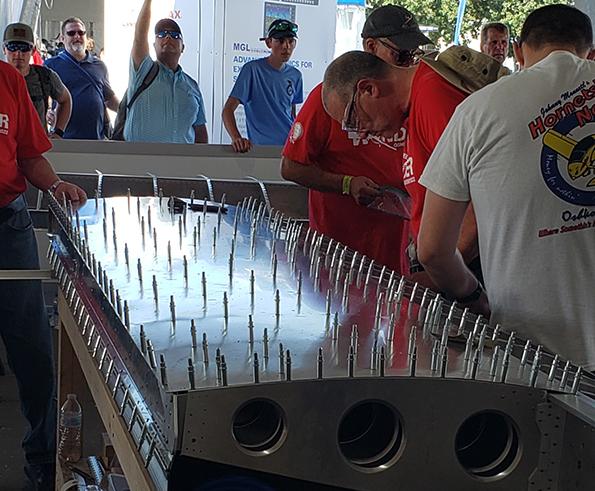 Michael Lavitt/BCADay 2: Cleco temporary rivets are placed in the top of the wing, awaiting final fastening to hold skin panels together. 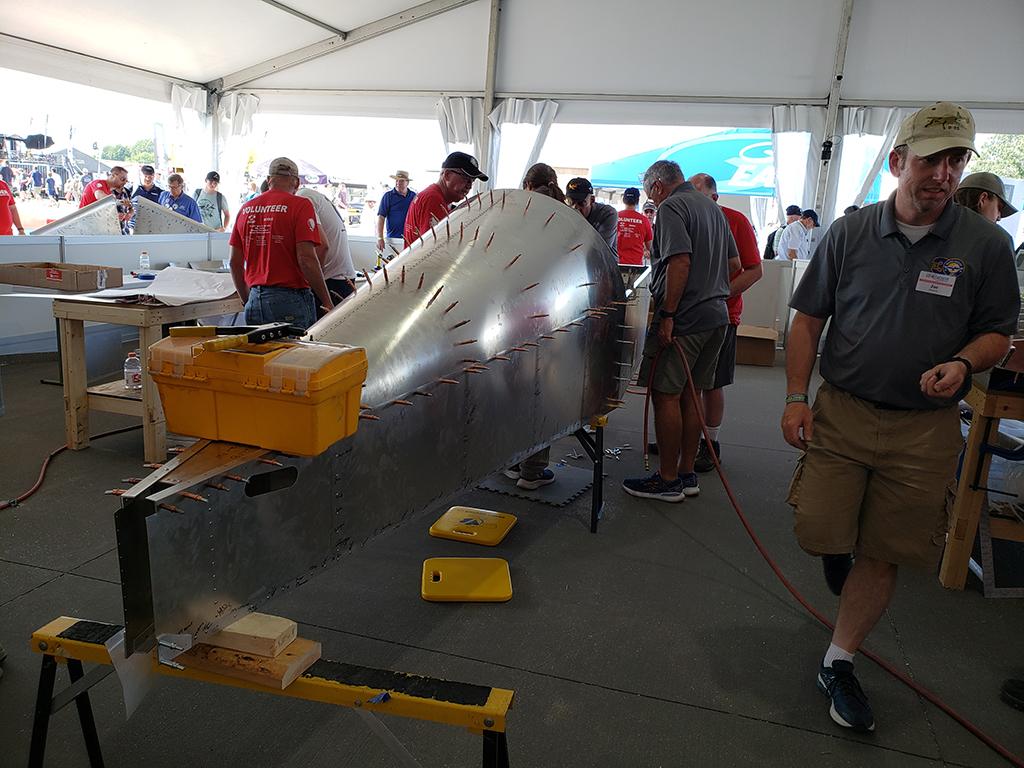 Day 3: Upper and lower fuselage sections of the Sonex Waiex have been joined, making it clear that an aircraft is being built. 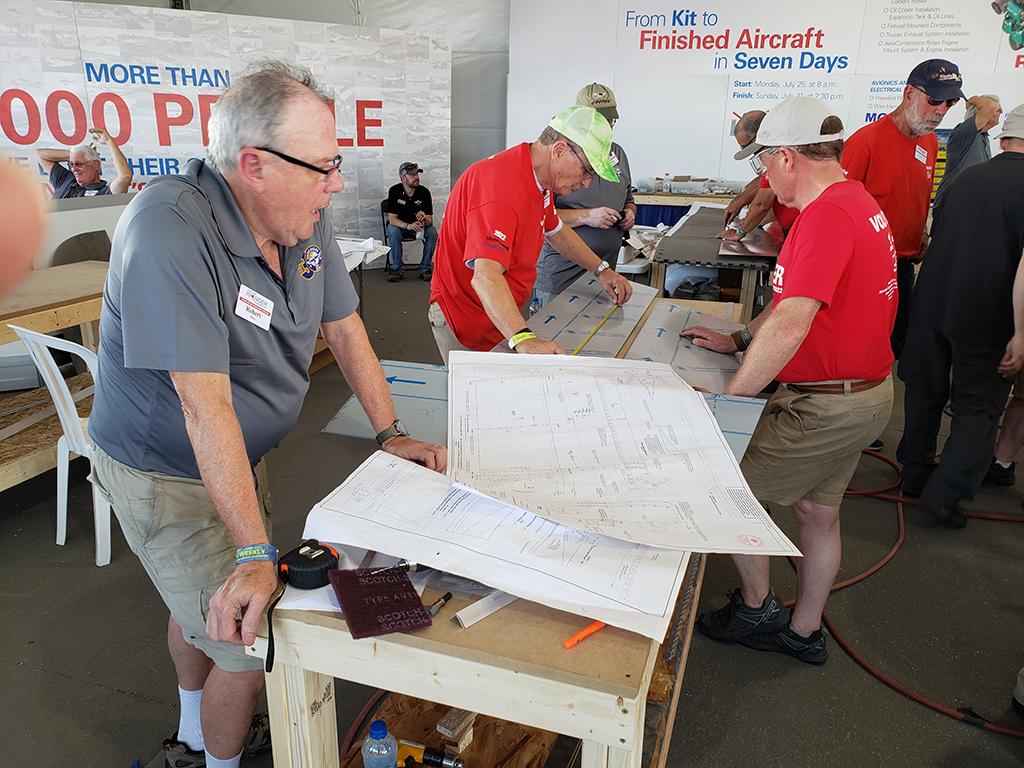 Day 3: Nothing goes perfectly when doing something as complex as building an aircraft, especially when you try to do it in a week. Volunteers in red shirts are redrilling holes in a replacement aileron panel after the first were found to not line up properly. The volunteer in the foreground is studying plans. 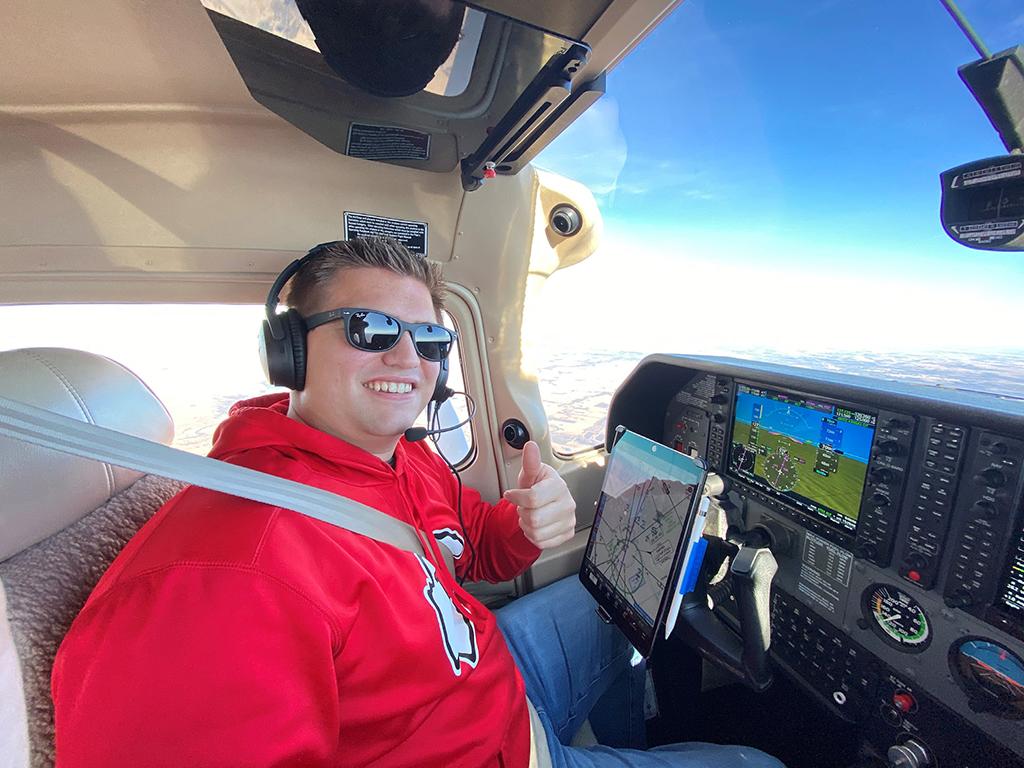 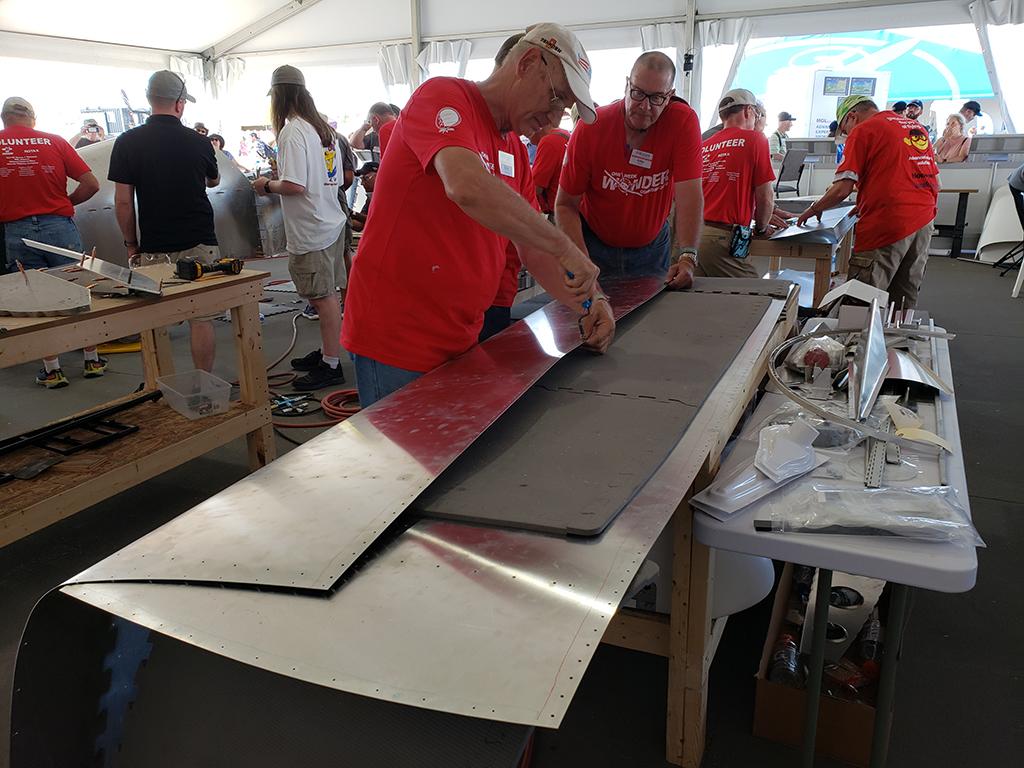 Day 3: Volunteers debur the leading edge, a laborious but critical stop in the assembly process. The two sheets must be perfectly smooth so that rivets will remain tight. Tiny gaps would open between the pieces of sheet metal as burrs were not removed before riveting. 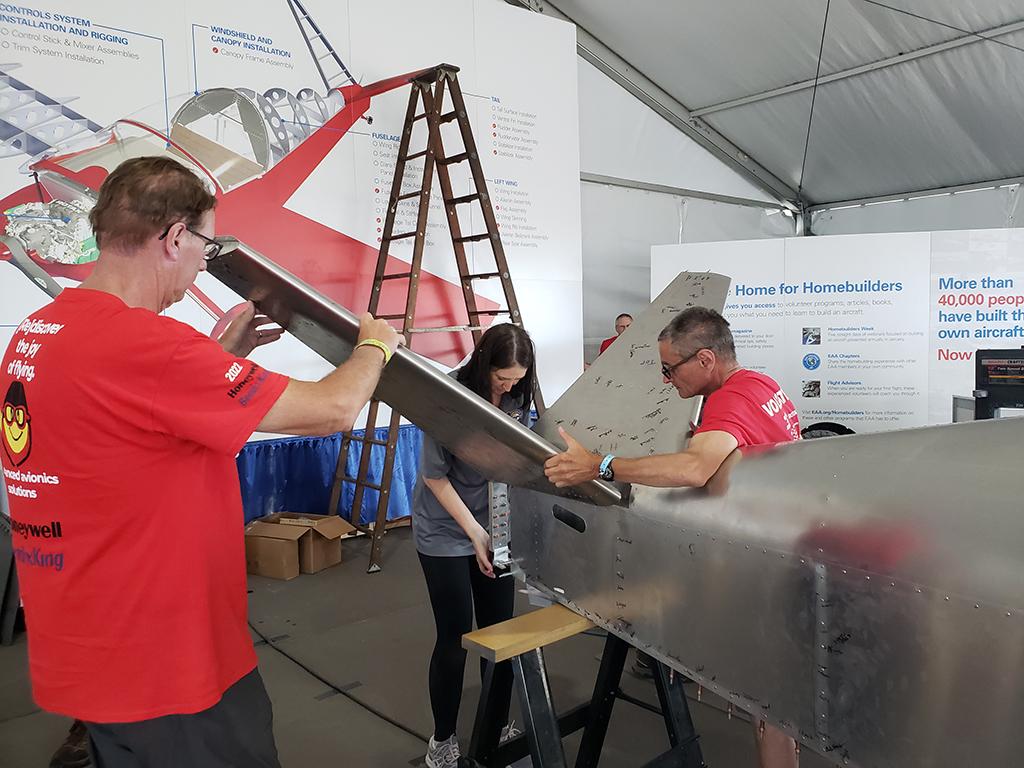 Day 4: Volunteers attach the stabilator to the rear fuselage. 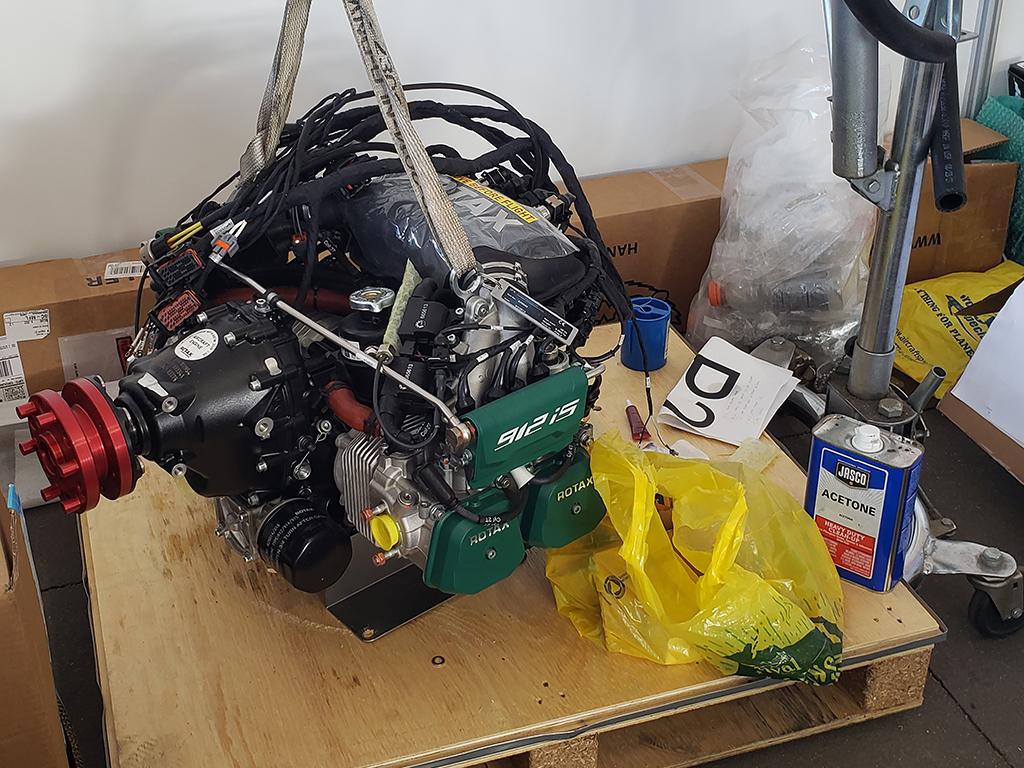 The One Week Wonder's Rotax engine awaits installation in the airframe. That will probably happen on Day 5, July 29. 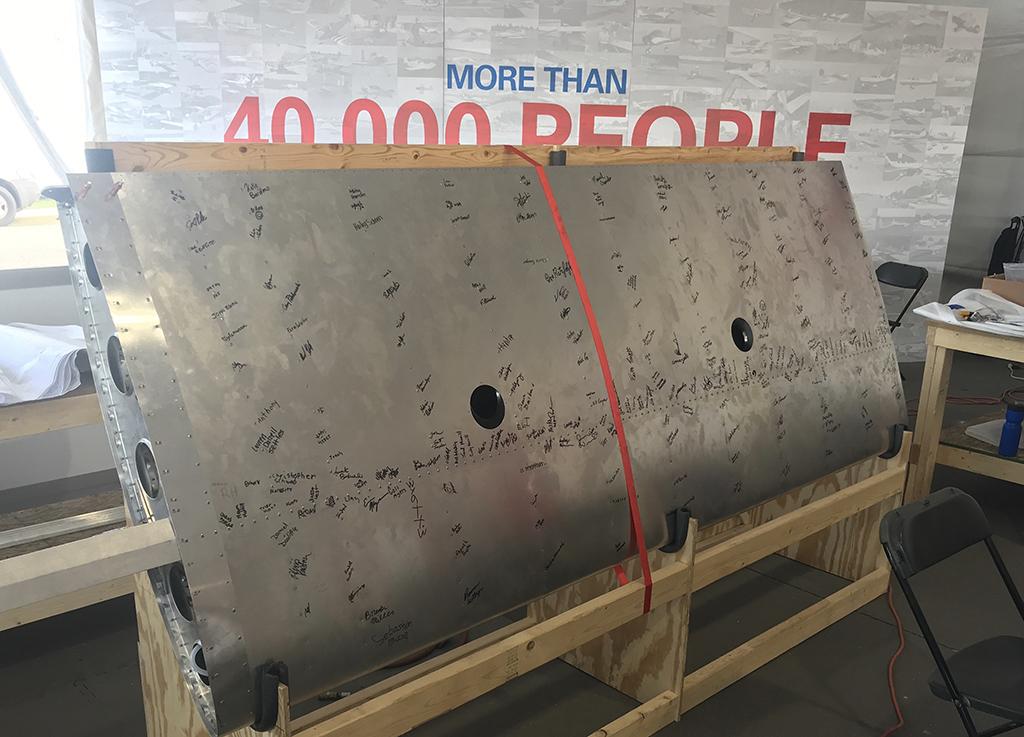 DOUG MACDONALDThe assembled wing awaits installation on the aircraft. Signatures are written all over the wing from visitors who pulled the adjacent rivets. 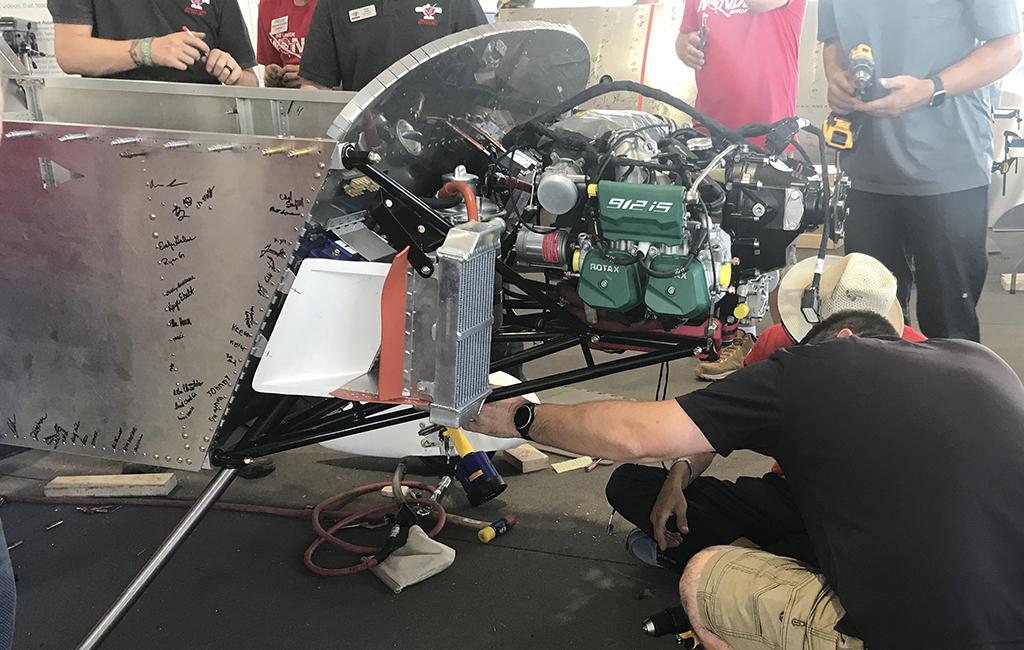 Credit: DOUG MACDONALD A volunteer works on the forward firewall installation. The Rotax engine is in its place. 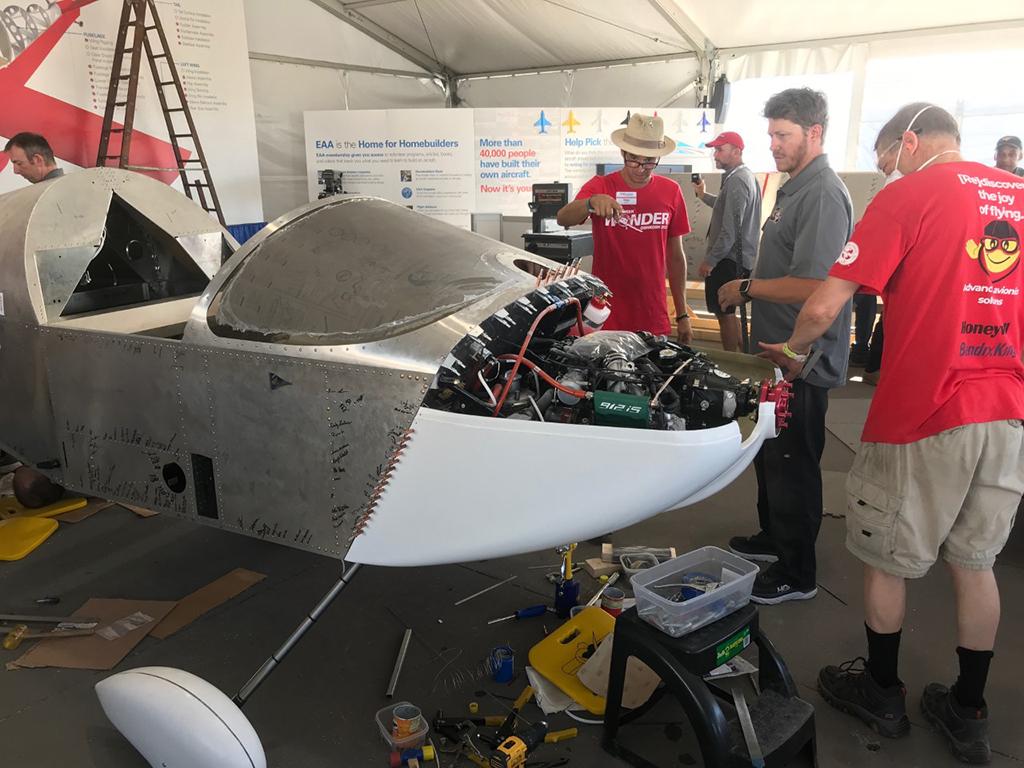 Day 6: With the engine in place, volunteers attach the lower cowl. Note the signatures of AirVenture visitors who drove rivets that hold skin panels together. Anyone attending this year's event could learn how to drive rivets on a practice panel and then install one on the Sonex Waiex kit-build aircraft. 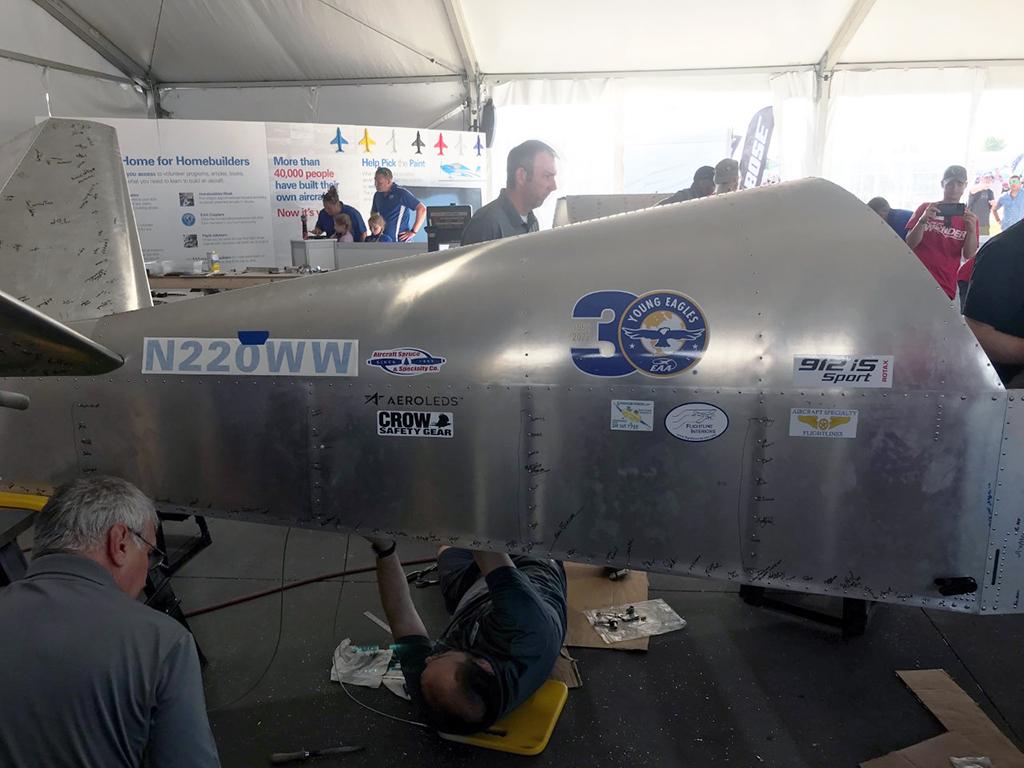 Day 6: The Waiex's registration number is taped to the tail. Project sponsor logos are also in place but will be removed when the aircraft is painted. Work must be completed by about 2 p.m. CDT on July 31 as AirVenture 2022 nears the finish line. 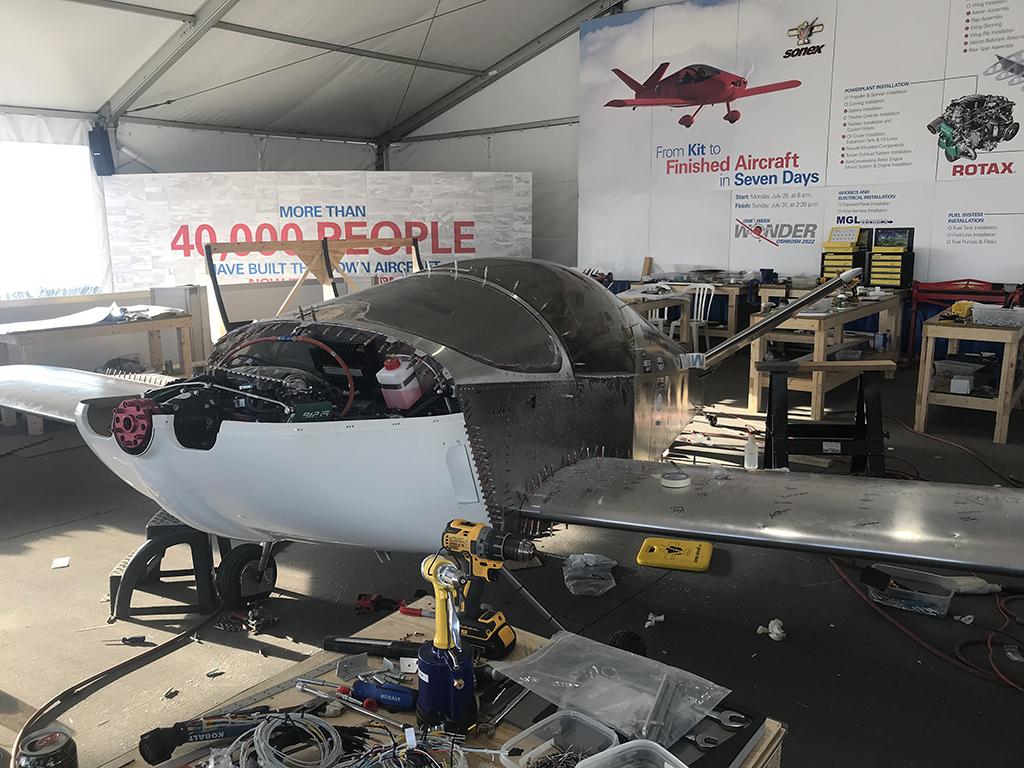 Day 7: The upper cowl and propeller need to be installed as work is nearly complete on the "One Week Wonder" on the final day.

Day 7: The Sonex Waiex is completed on time and rolled out on the final day of AirVenture 2022. The aircraft cannot be flown at Oshkosh until the show ends, according to FAA rules. And the livery will be determined based on a vote of people who attended the show or voted online.

The Experimental Aircraft Association’s AirVenture Oshkosh is the largest aviation gathering in the world in terms of attendance. With exhibitors that include Boeing, Airbus and the U.S. Air Force, it may be easy to forget that EAA is rooted in hobbyists assembling home-built airplanes that can be purchased for relatively small amounts of money. For this reason, EAA has made “One Week Wonder” a spotlight at this year’s AirVenture.

One Week Wonder is a challenge spanning the show’s one-week duration. A group of volunteers comes together to build a kit airplane from scratch to fly-ready completion by the end of the festival. This year, volunteers will be building a Sonex Waiex from Sonex Aircraft.

Building a kit airplane can take many years to complete on one’s own, but EAA wants to inspire others and let the world know building an airplane can be done, it’s not crazy and people can take advantage of some of the greatest aerospace technologies available.

On Day 1 everything is out of the cardboard boxes. EAA CEO Jack Pelton joked that because the event started seven minutes late due to a faulty microphone, the team was already running seven minutes behind schedule.

On Day 2 work was slightly ahead of schedule, said Doug MacDonald, who is leading logistics on the project.

On Day 3 Chris Nash, a product engineer at Sonex who is the assembly leader, said work was basically on time. The upper and lower fuselages were joined, and the wing assembly was progressing.

On Day 4 assembly of the Waiex is still on schedule or maybe a little ahead, but leaders don't want to talk about being ahead. Losing the sense of urgency could result in losing ground. But doing everything right is more important than schedule when building an airplane. MacDonald says the goal on Day 4, July 28, is to get the aircraft standing on its landing gear. This update was written at midday.

On Day 5 the Waiex is really taking shape. The engine is now in place in the engine bay. The wing is ready to be attached to the aircraft, following riveting by AirVenture attendees who sign it near to the rivets they pulled. Their signatures will be printed in one of the completed aircraft's fuselage stripes.

On Day 6 work is nearing completion. The lower cowl is installed below the engine, and volunteers attach the fuel tank in the fuselage.  Its registration number is taped to the rear fuselage. The windshield is also installed.

On Day 7 volunteers finish work on the Sonex Waiex and roll out the low-wing, V-tail aircraft. All that remains is a trip to the paint hanger and signoff by the FAA.

This gallery is sponsored by: