Improved flight characteristics of the all-metal Mark 21 is an unexpected boon for Mooney Aircraft Co. and adds justification to its switch from the wood-and-metal construction of the Mark 20.

Mooney engineers believed that conversion from the wooden wing and empennage of the Mark 20 to the all-metal construction of the Mark 21 would have no influence on the performance of the new aircraft inasmuch as the physical and aerodynamic dimensions were identical. With the conversion implemented only to eliminate production bottlenecks, the improved slow-flying and stall characteristics as well as the smoother taxiing performance of the Mark 21 are attributed by Mooney engineers to the stiffness of the all-metal structure. 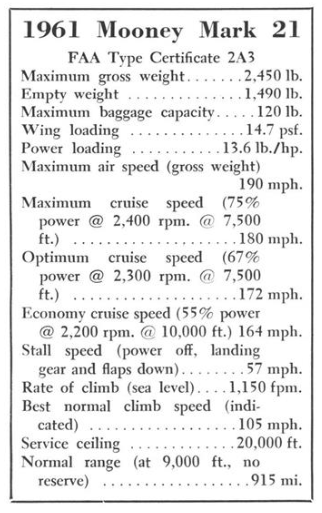 With a small dorsal fin marking the only difference in appearance from the Mark 20, the all-metal Mooney fuselage consists of welded chrome-molybdenum steel tube frame with aluminium skin flush riveted thereon. The fuselage tail cone section has been redesigned of monocoque construction for added strength, with a spring-steel tail skid for protection against a tail-low landing, and a tiedown ring attached to the lower section of the tail cone rear bulkhead.

Explore every issue. Every article. Every ad.