Business Aircraft Adept for ‘Spy In The Sky’ Missions 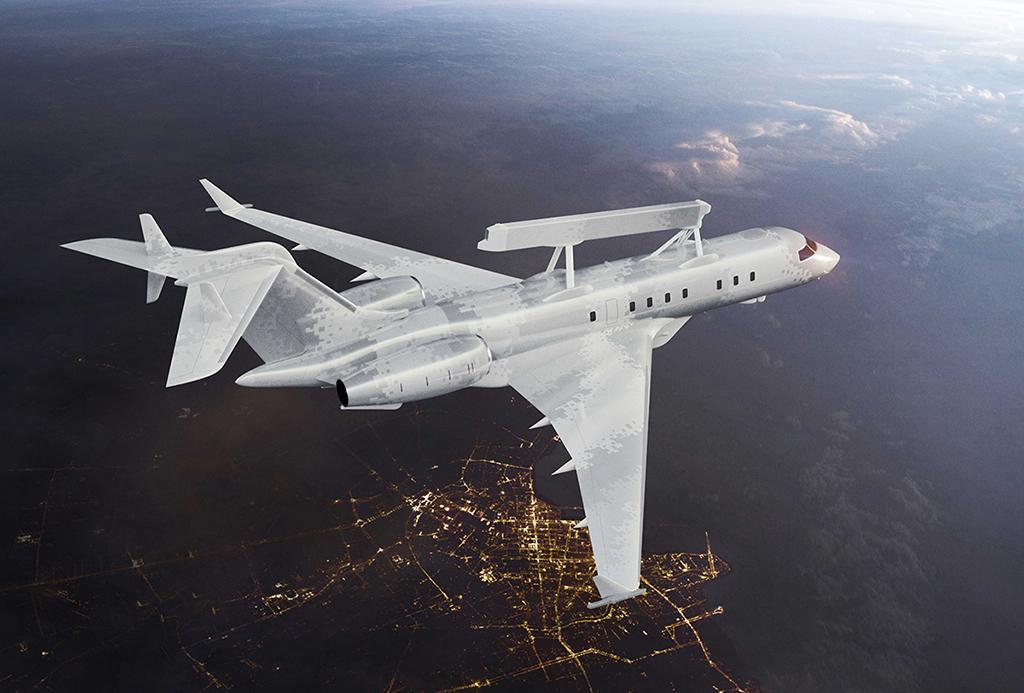 Among the advantages to militaries considering using a proven bizjet platform for a high-end surveillance mission is the compression of the usual sort of timescale. The United Arab Emirates’ GlobalEye provides a case in point: The $1.27 billion contract to develop the system was signed with integrator Saab during the Dubai Airshow in 2015, and the third (of three) aircraft was on display at the same show last November. Atop the Bombardier Global 6000 fuselage sits a Saab Erieye ER S-band airborne early-warning radar, while the platform also features a Leonardo Seaspray 7500E active, electronically scanned array surface-search radar and an electro-optical sensor. Earlier this year, Saab demonstrated the capability to the Finnish Air Force, which is considering the GlobalEye as part of its HX fighter-procurement package. 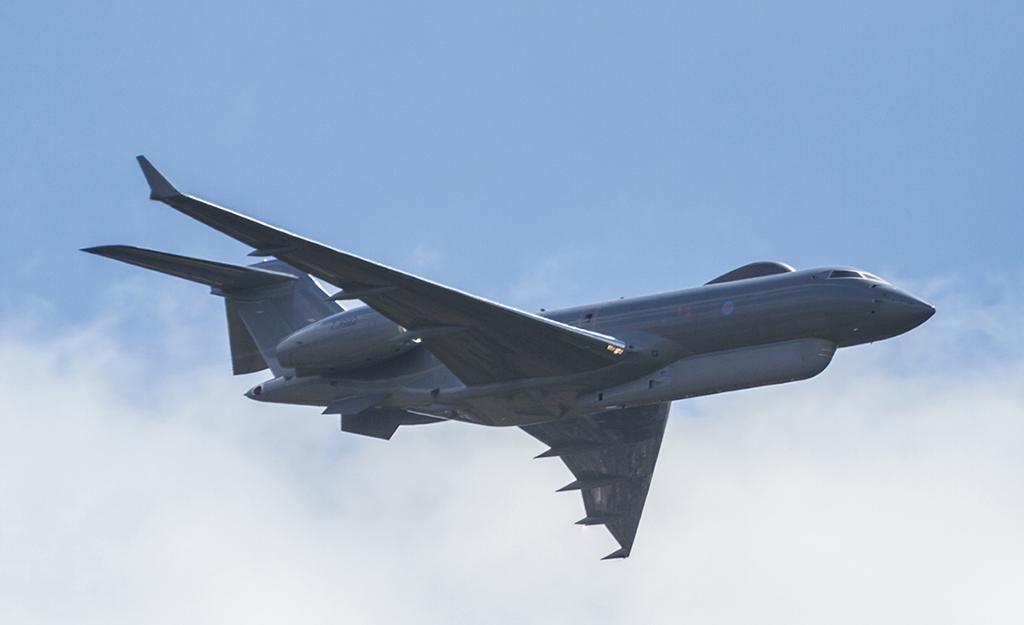 RAF’s Raytheon Sentinel To Be Stood Down

Arguably the aircraft that kick-started the vogue for using business aircraft in military reconnaissance roles, the Raytheon Sentinel R-1, is to be retired from service with the UK’s Royal Air Force in March. Five aircraft—Bombardier Global Express platforms with a SAR/GMTI (synthetic-aperture-radar/ground-moving-target indicator) sensor in a large fairing under the centerline—were ordered to conduct Cold War surveillance but played vital roles in conflicts in Afghanistan, Iraq, Libya and Syria, and during UK flood relief. In May, footage was published online showing a Sentinel apparently being intercepted by Russian Sukhoi Su-30SM fighters over the Black Sea. 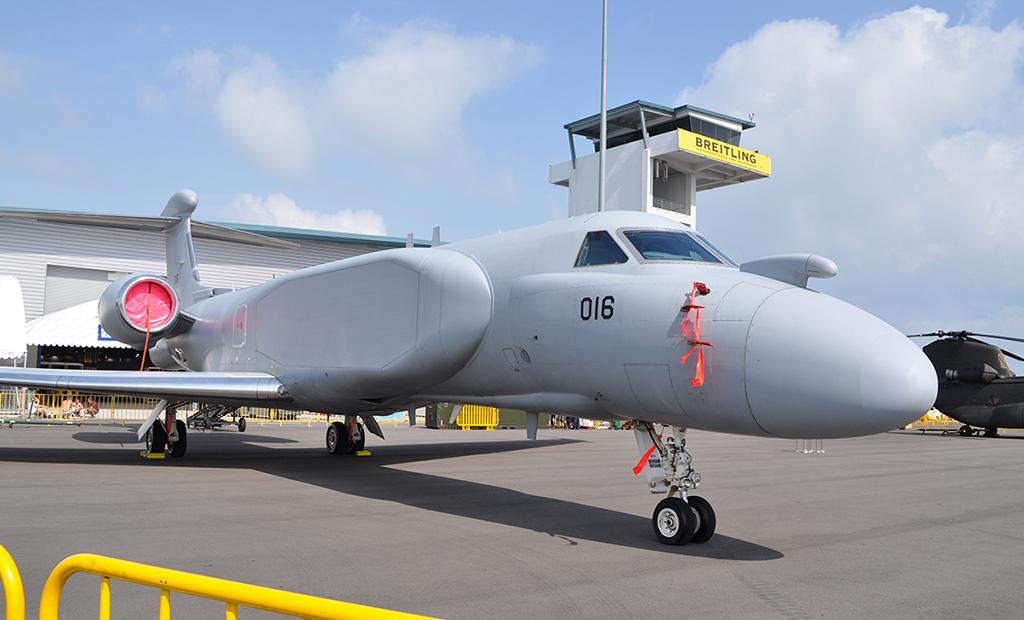 In a carefully worded statement released in June, Israel Aerospace Industries announced it had signed a $350 million contract to supply special-mission aircraft to a major European nation. However, the company did not identify the purchasing nation, the number of aircraft or their specific roles, nor what platform the systems would utlize. The company delivered two Gulfstream G550-based airborne-early-warning-and-control aircraft to Italy in 2016 and 2017; the same type is operated by Israel and Singapore. The company also supplies special-mission aircraft configured for ground-surveillance, maritime-patrol and signals-intelligence roles. 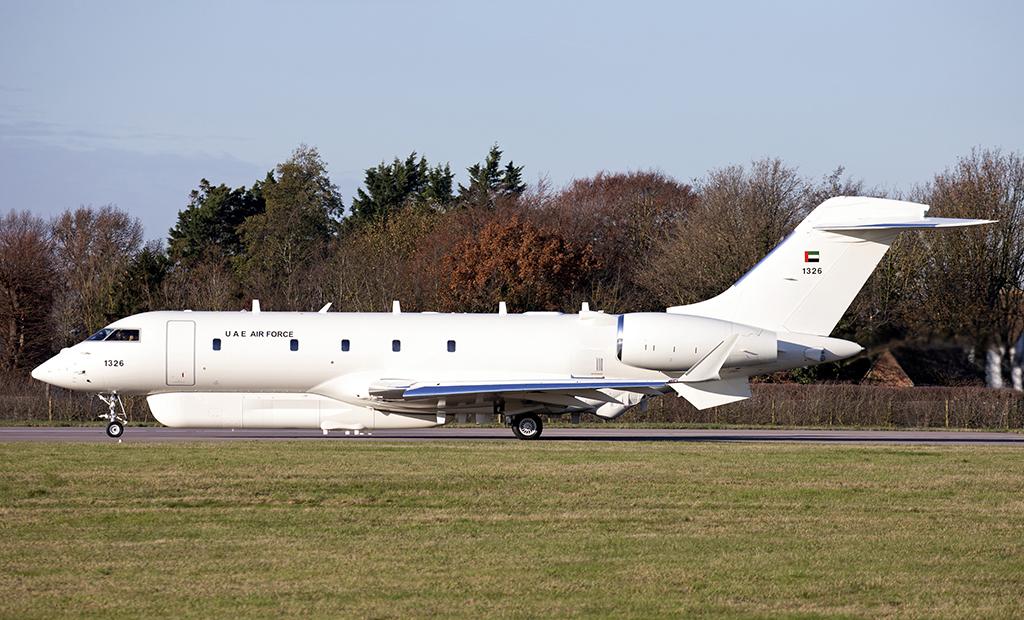 Mystery still shrouds the United Arab Emirates’ other intriguing Bombardier Global 6000-based airborne surveillance system. Two aircraft were delivered to Marshall Aerospace and Defense’s home base at Cambridge Airport, England, in 2012. Photographs taken by airplane spotters and published online in 2017 showed one of the two aircraft fitted with a large fairing under the centerline and with various other “lumps and bumps” indicating a suite of complementary sensing capabilities. Neither Marshall nor the UAE military has publicly discussed Project Dolphin. But ahead of the Dubai Airshow last November, Aquila Aerospace, a company owned ultimately by the UAE government, announced it was converting two Bombardier Challenger 650s for similar missions, implying that delays to the Dolphin aircraft lay behind the decision to stand up an additional program. 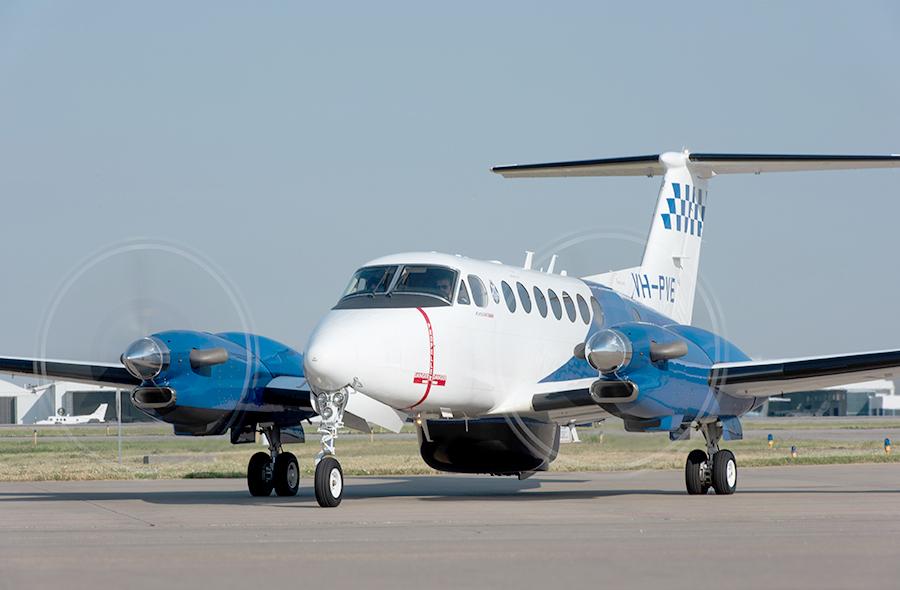 The police force of the Australian state of Victoria has become the latest member of the Beechcraft King Air special-missions family—albeit through a third party. In August, the Wichita-based airframer announced a King Air 350ER had entered service for the Victoria police, though it is being operated and maintained by the independent company Skytraders. The aircraft has a custom-mission system and sensor suite developed specially for an expected set of roles that will include training, overland and overwater search-and-rescue. Meanwhile, Beechcraft parent company Textron has confirmed deliveries of its next-generation King Air the 360/360ER will begin before year-end. 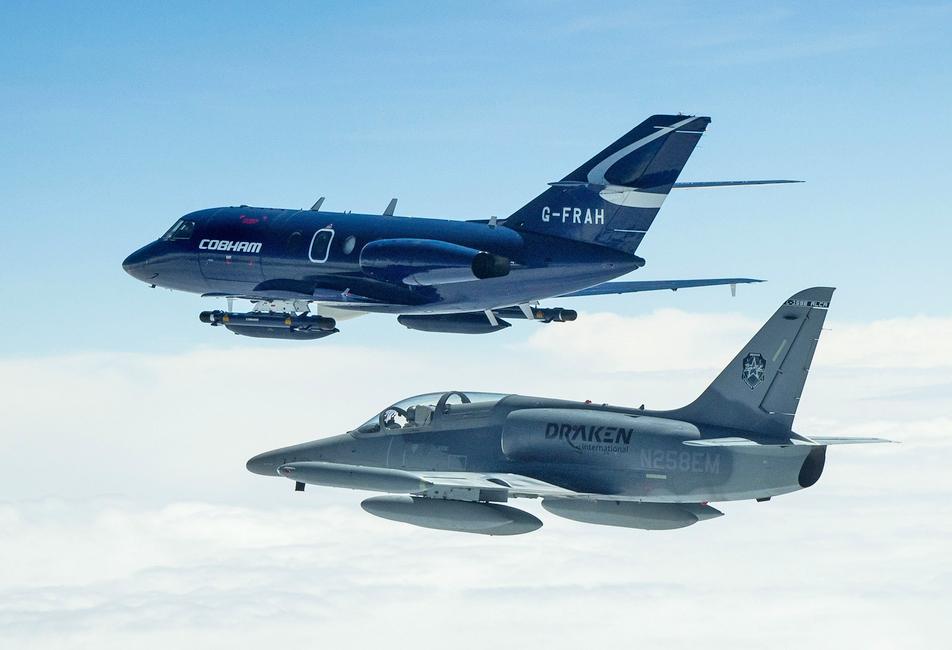 It has been an interesting couple of years for the UK-based fleet of Dassault Falcon 20s flown by Cobham Aviation Services. In 2017, the company teamed with Draken International to bid for the UK’s Air Support to Defense Operational Training contract, only for it to be canceled in 2019. No sooner had the company confirmed an extension to its contract to fly the Falcons from Teeside International Airport in support of Ministry of Defense training flights than the entire Aviation Services division was sold—to Draken. The Falcons have been used in the role since 1985 and can simulate a range of aggressor aircraft via a series of pods that include electronic-attack and radar-signal simulators.

Since buying Grob Aircraft at the end of the 2000s, Germany’s H3 Aerospace Group has developed a series of International Traffic in Arms Regulations-free special-mission platforms and has seen success with projects such as its Icarus-X, a Cessna 208 Caravan modified for ISR (intelligence, surveillance and reconnaissance) missions. Three were sold earlier this year to Kenya and will be armed. The company’s most recent product is the Eagle King, a Beechcraft King Air 350 adapted for ISR missions over both land and water. No sales have yet been announced. 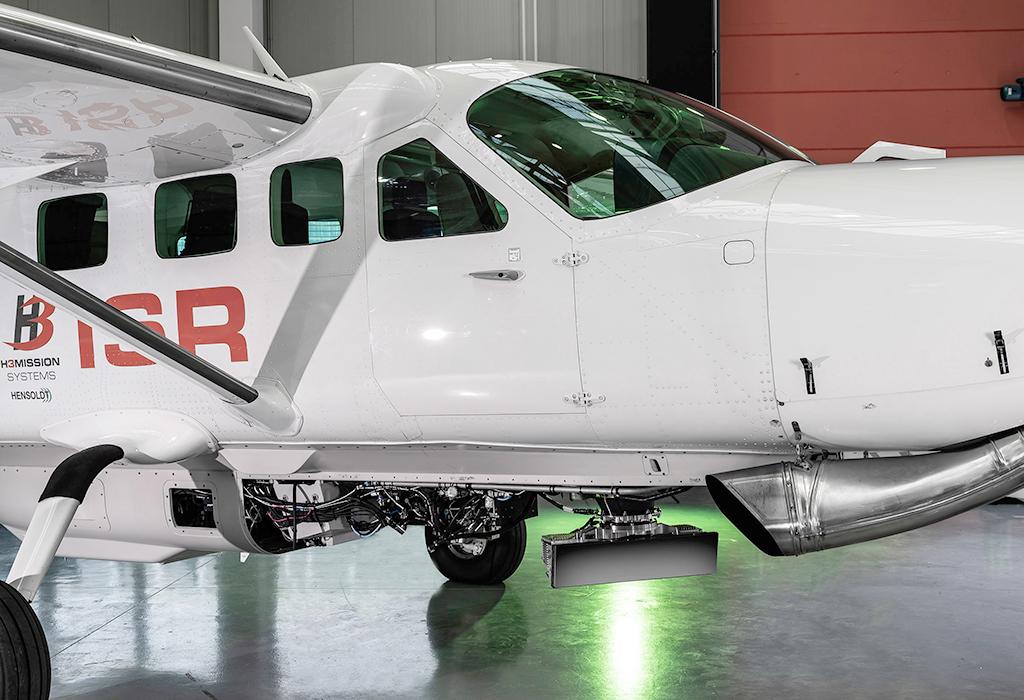 Hensoldt’s PrecISR 1000 radar completed its first flight in Germany in June, aboard a Cessna Caravan testbed operated by H3. The sensor took two months to integrate onto the aircraft for the test campaign, which lasted a week. The radar, which has overland and overwater applicability and features software-defined modes and electronic-beam steering, is due to be flown on a Pilatus PC-12 for an operational customer later this year. The company says it has been “awarded an order by a provider of airborne special-missions operations to deliver a PrecISR 1000 until year-end for installation underneath a PC-12 special-operations aircraft.” 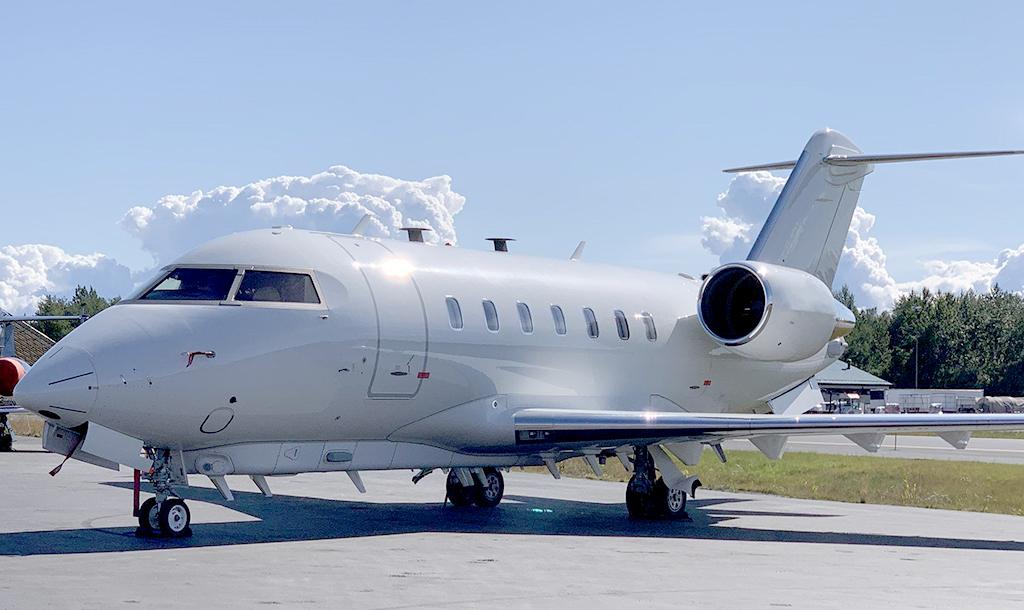 This July, the U.S. Army’s Intelligence, Electronic Warfare and Systems (IEW&S) program office announced the deployment of a Bombardier Challenger 650 to the Pacific region. The jet, operated under a contractor-owned, contractor-operated business model by integrator Leidos, is part of a program called Artemis (Airborne Reconnaissance Target Exploitation Multirole Intelligence System), and is the Army’s first jet-powered reconnaissance aircraft. Although Artemis is providing operational data in the region, the platform’s primary purpose is to help the Army’s requirements developers gain experience with the capabilities of high-altitude jets, as the service mulls its own replacement for the canceled U.S. Air Force Joint Stars recapitalization program. 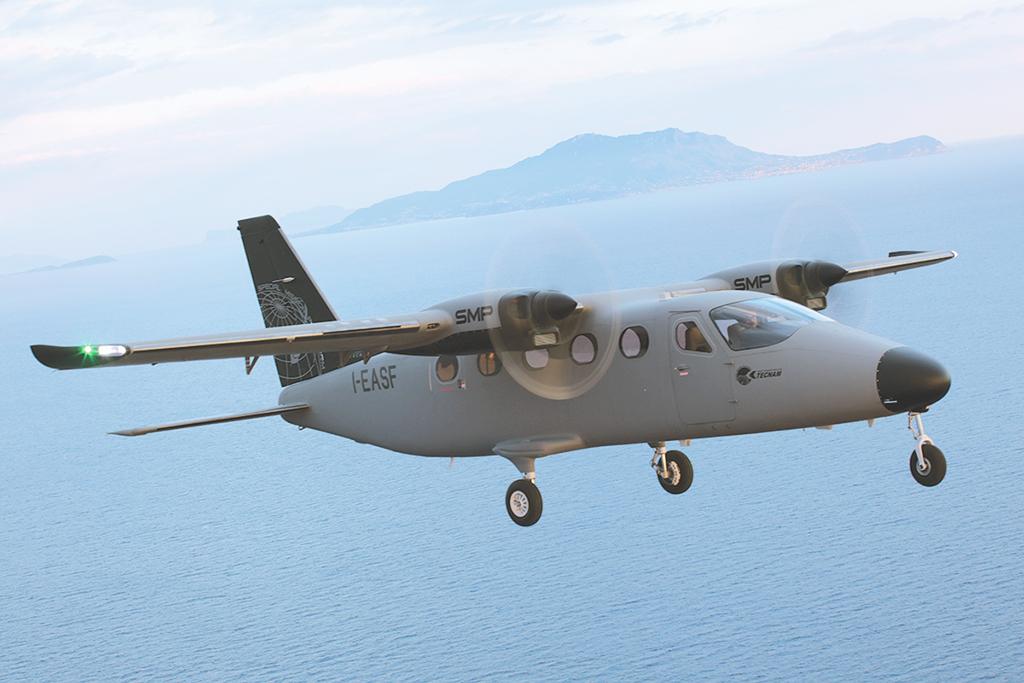 Italian airframer Tecnam has launched a special-missions variant of its P2012 Traveller 11-seat commercial aircraft. The new aircraft—dubbed P2012 SMP Sentinel (Special Missions Platform)—was rolled out in September. A kit, available as an option, can convert the aircraft into a standard P2012 passenger configuration. Uses include aerial surveying and mapping as well as military or law-enforcement surveillance. “Our effort has been focused on the development of a system with higher-class capabilities at a fraction of their acquisition price, making such vital services accessible to those countries and operators that simply couldn’t afford them before,” said Giovanni Pascale Langer, the company’s managing director.

Business aircraft show their versatility and adaptability beyond their traditional corporate and VIP transport roles. The platforms are being utilized in considerable quantities as flying testbeds to conduct high-end surveillance and electronic warfare. We look at a few of the special missions that business aircraft are operating.