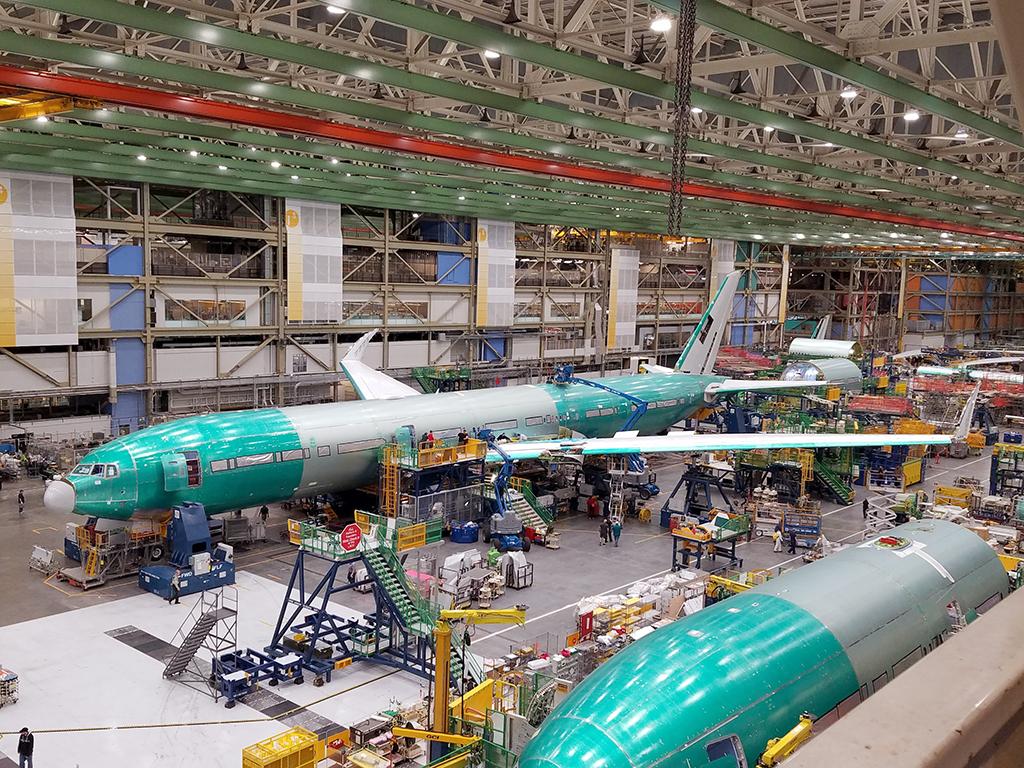 Looking like a complete aircraft for the first time without the “saddle” fixture used during final body join, flight-test aircraft No. 1, also known as WH001, is pictured in Building 40-24 on the low-rate initial-production line—a specially established area set up to build the first group of 777-9s without disrupting the existing 777-300ER/-200F line in the adjacent 40-25 bay. Including WH001, five 777-9 airframes, four for flight testing and one for fatigue tests, are in various stages of assembly and completion. 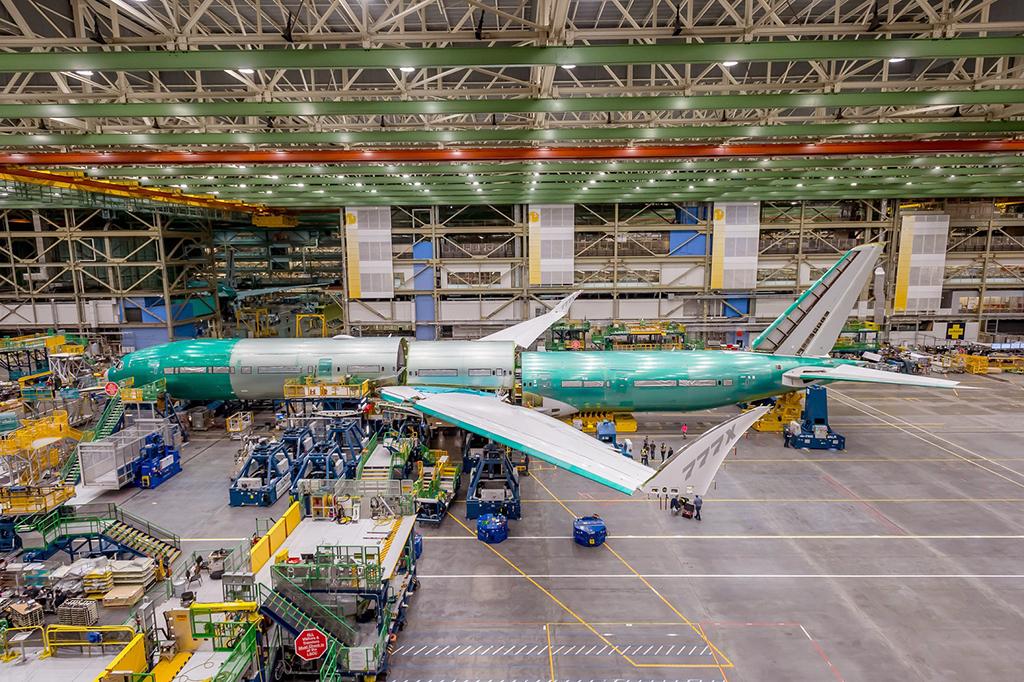 Pictured before the final body join took place, sections of WH001 are marshaled together on a streamlined production line empty of the traditional fixed tooling monuments previously used at this stage of the assembly process. Boeing completed construction of the static-test aircraft—the first 777X airframe to be built—in just 16 days in September, versus the 20 for which it was budgeted. The first flight-test airframe was built in 20% less time than the static airframe, says Boeing. 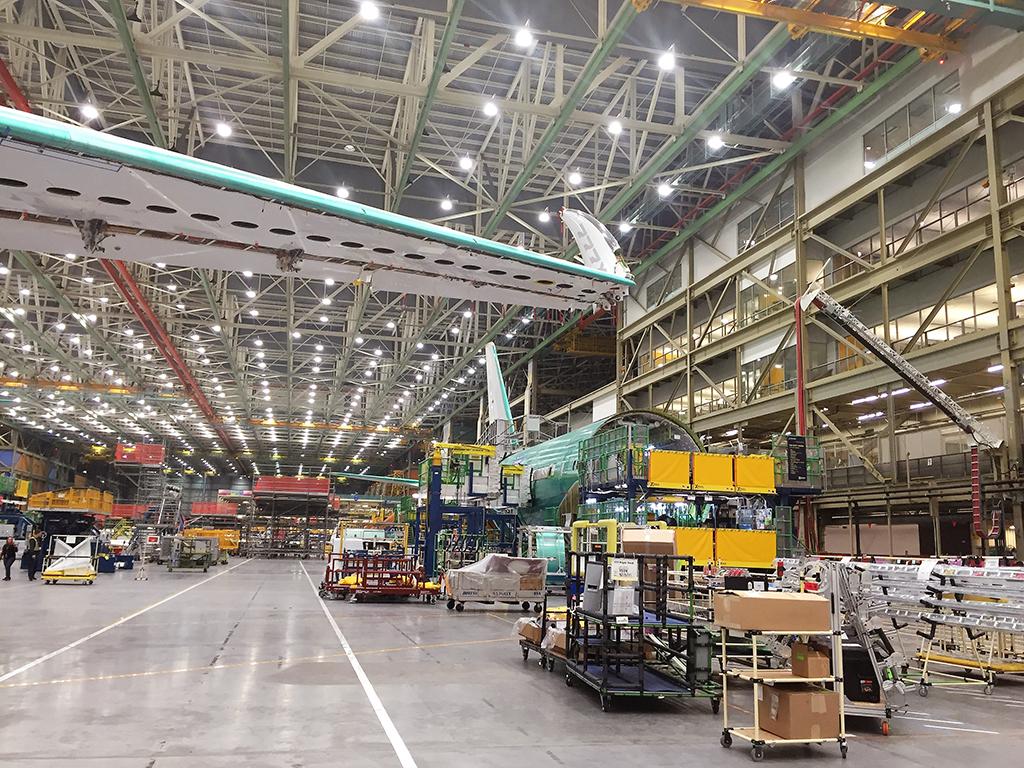 The wing, complete with its folding wingtip section, is already fitted with systems and movable surfaces prior to final join. All leading and trailing edges, with the exception of the inboard flap section, are pre-installed at the “service-ready” wing position before attachment to the fuselage. The large inboard flaps are attached later to provide additional space for mechanics to carefully “index” the wing roots to the fuselage. 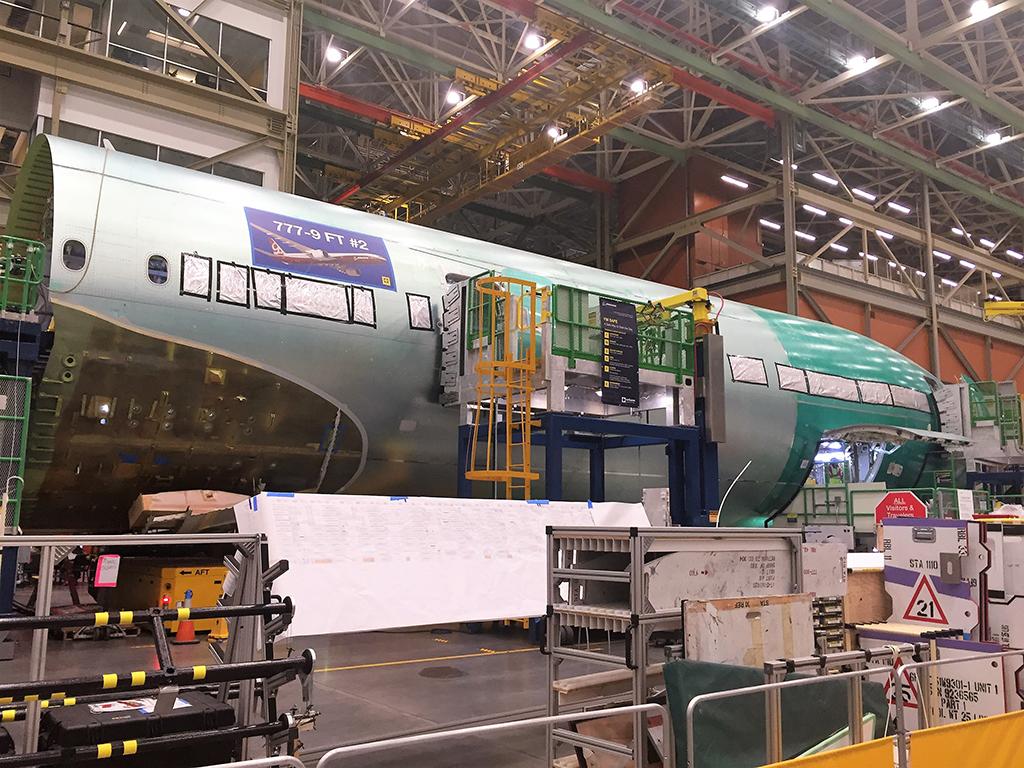 Completed using the robotic fuselage assembly upright build process now standard on the current 777 line, the forward fuselage of WH002, the second flight-test aircraft, undergoes preparatory work prior to the start of final assembly. Note the larger windows positioned slightly lower on the fuselage side. 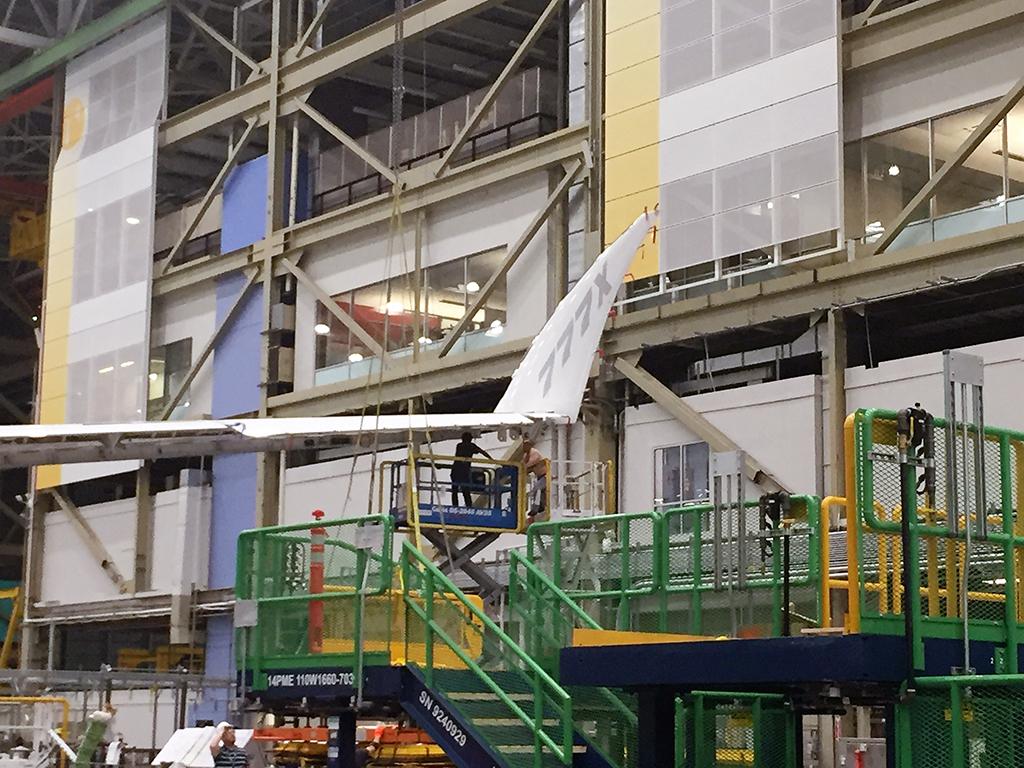 Although resembling winglets when viewed proportionately against the overall size of the 777-9, the folding wingtip sections are each just under 12 ft. in length and—when stowed in their upright position as pictured—reduce the overall wingspan to 212 ft. 8 in. from 235 ft. 5 in. The operation of the wingfold mechanism is currently tested after final assembly using ship’s power, but from aircraft No. 7 onward, it is expected to be tested at the service-ready wing station prior to mating with the fuselage. 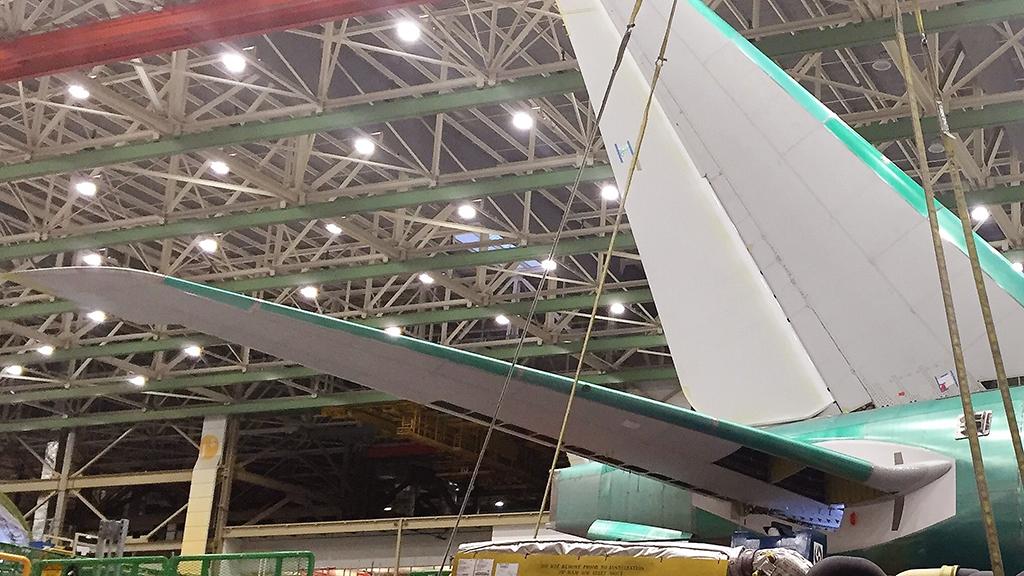 The vertical tail of the 777-9 towers 64 ft. 1 in. above the ground, taller than the 61-ft. 10-in. maximum height of the 777-300ER fin. The one-piece rudder does not have the distinctive large tab of the current 777 family and is distinguished by an inward curving trailing edge at the base that provides space for the opening of the auxiliary power unit inlet, relocated to the upper aft surface of the tail cone in the 777X. 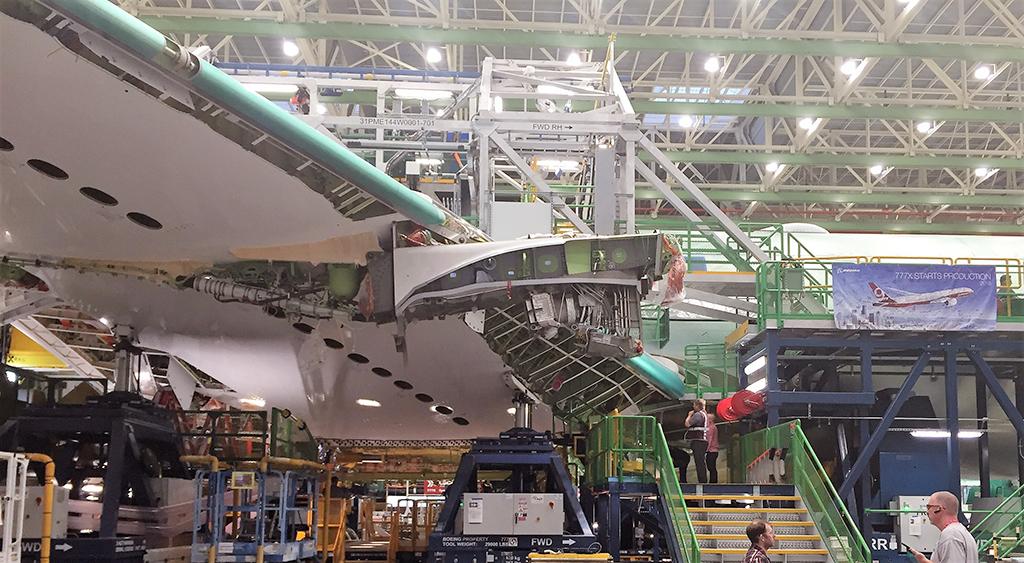 The pronounced gulling of the 777-9 inboard lower wing surface reveals the 787-like design features, composite skin and substructure. The composite wing is attached via a titanium side-of-body rib that is built into the fuselage rather than on the wing root, which is the practice for the all-metallic 777-300ER. Note the very large engine strut designed to hold the General Electric GE9X turbofan. The strut is cantilevered up to provide ground clearance for the engine’s 134-in.-dia. fan. Just visible between the aft of the strut and the drag brace attaching to the aft spar is the green-painted, newly positioned hydraulic reservoir. 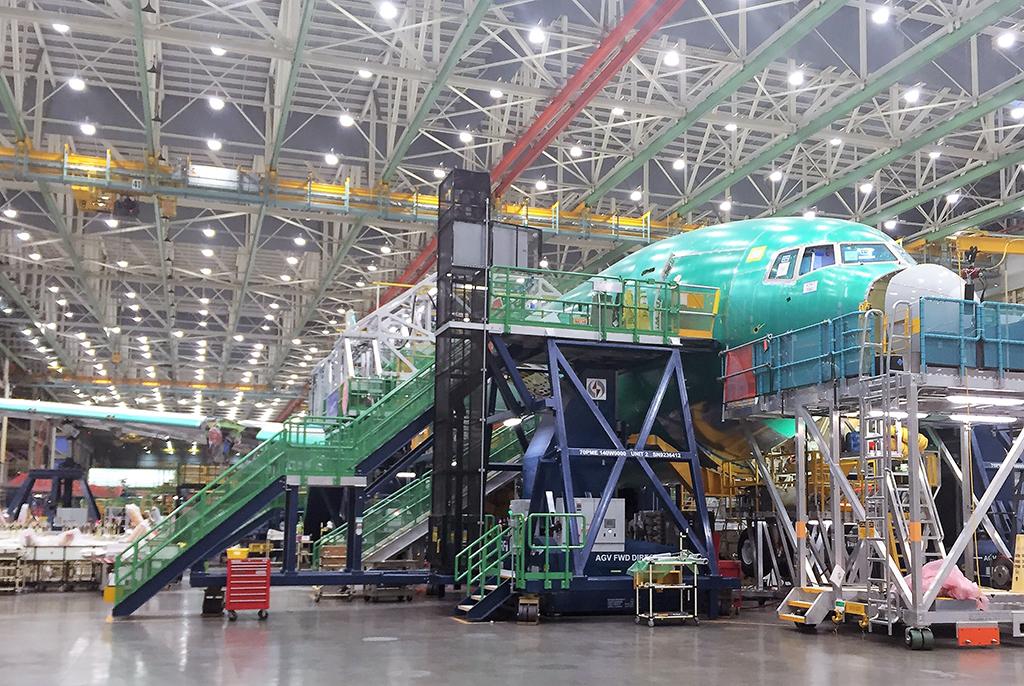 With flight deck and interior systems already being connected after final body join, WH001 is pictured just days before being lowered onto its own landing gear for the first time on Nov 28. The “weight-on-wheels” milestone was the prelude to the beginning of a gradual “power-on” process to energize the aircraft’s electrical systems for the first time.

The first Boeing 777-9, WH001, has now been rolled on its own landing gear to the final assembly position in Building 40-24 inside the company’s Everett, Washington, facility. The move follows the joining of fuselage sections and wings earlier in November. Aviation Week was granted exclusive access to view the first aircraft shortly after final body join, as well as other wings and fuselage sections under assembly for follow-on test aircraft.