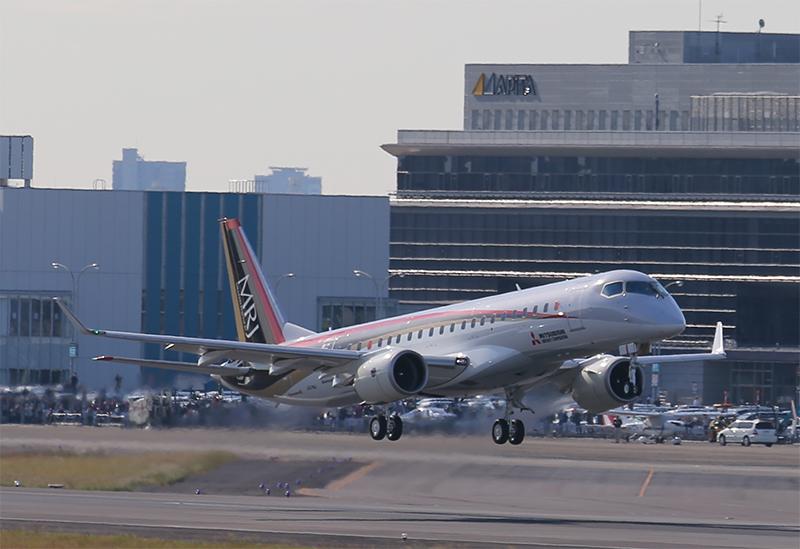 The first Mitsubishi Aircraft MRJ takes off for its first flight, departing Nagoya Airport on the morning of Nov. 11 under the power of its two Pratt & Whitney PW1000G engines. 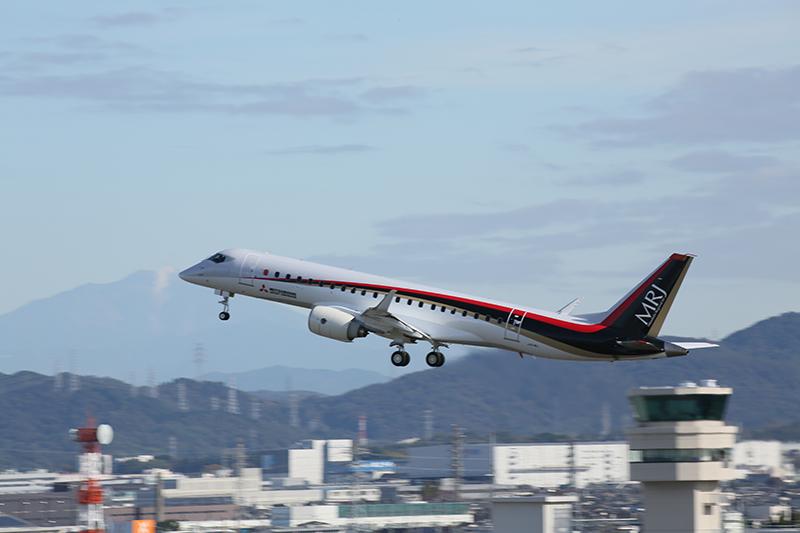 “Operational performance of the MRJ was far better than expected,” says the pilot who served as captain on the first flight. 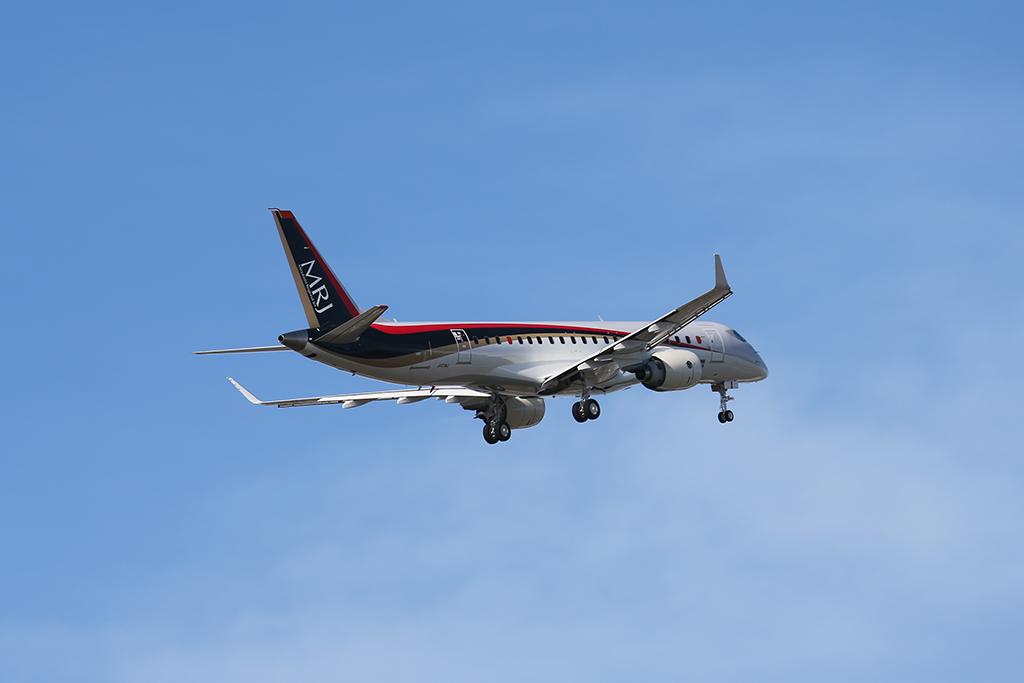 Mitsubishi Aircraft and MHI have restated the target to make the first delivery of an MRJ in the second quarter of 2017. Notably, since that target was set it has survived a six-month slippage in the date of the first flight, which until April was due to occur in the second quarter of this year. Flight testing will therefore be compressed. To achieve that, Mitsubishi Aircraft will assign a fourth aircraft to the flight-test base in Moses Lake, Washington, where good weather and uncontested skies will allow more intense flying than is possible at Nagoya. 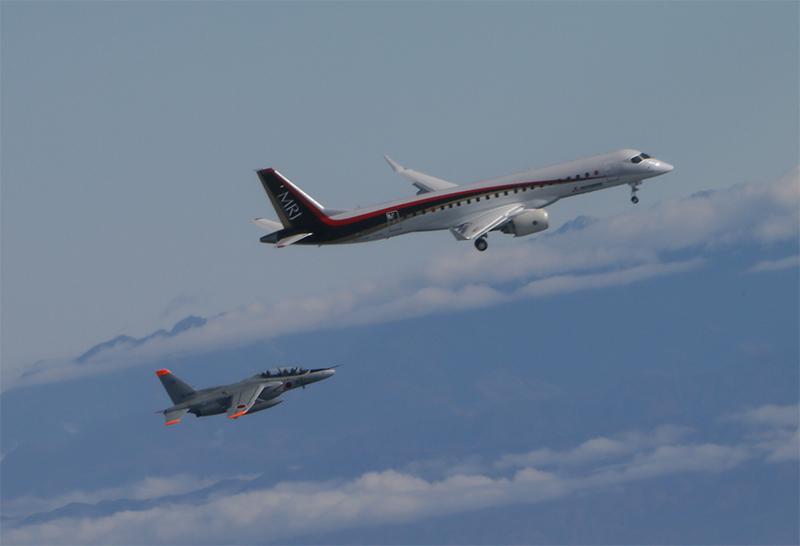 The MRJ’s first flight lasted 1.5 hours, during which basic characteristics were confirmed in airspace off the Pacific coast of Japan. Kawasaki Heavy Industries T-4 trainers escorted it. 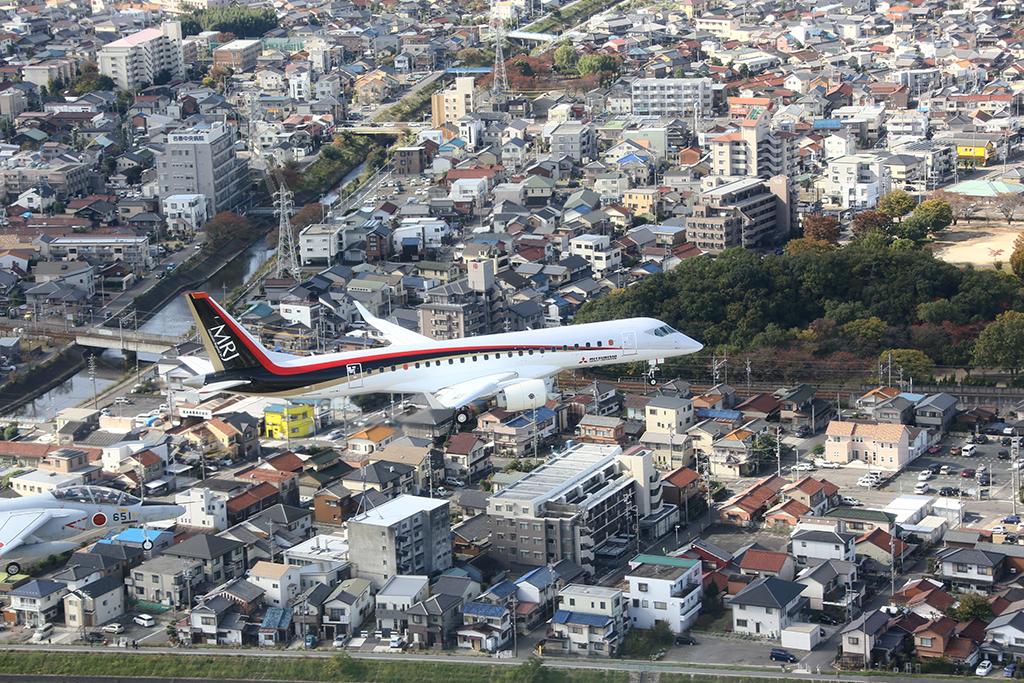 The MRJ is Japan’s first jet commercial transport and only its second airliner since World War II, following the YS-11 turboprop, which a consortium of companies, including Mitsubishi Heavy Industries, built from 1962 to 1974.

The first MRJ returning to Nagoya Airport, the location of the Mitsubishi Heavy Industries plant where it was assembled. First delivery of the MRJ is due in the second quarter of 2017, 3.5 years behind the target set when the program was launched in 2008. 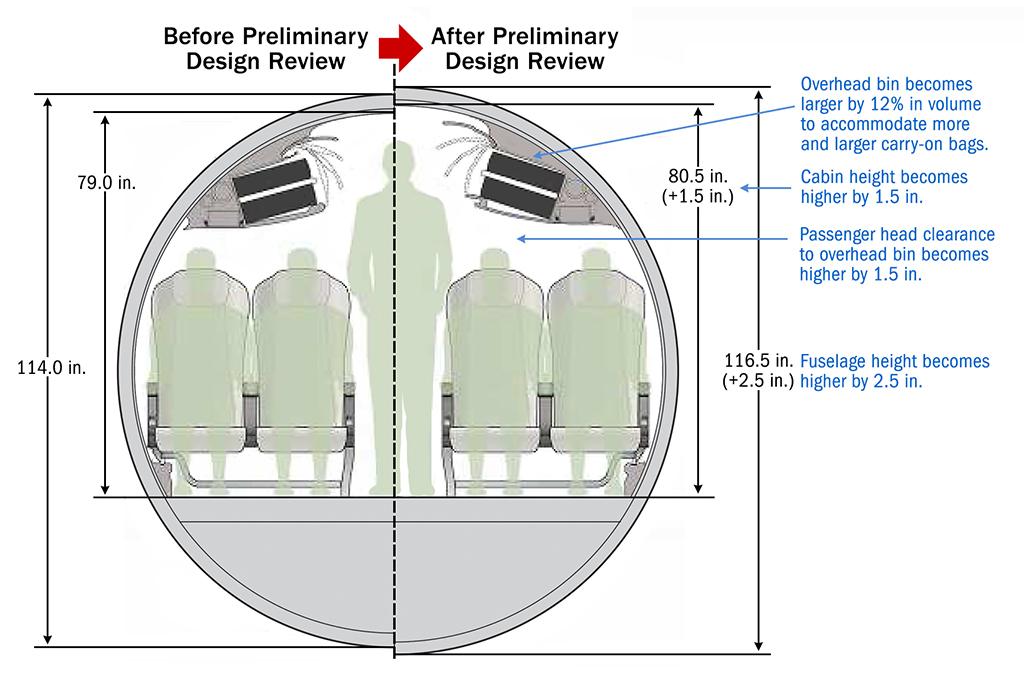 At the preliminary design review in 2009, Mitsubishi Aircraft made crucial changes to the MRJ design. The company dropped plans for a composite wing, cutting cost and, for the MRJ70, weight. It consolidated baggage space in the aft fuselage. And it enlarged the fuselage cross section, adding weight and drag but creating more space for taller and wider passengers and their luggage. 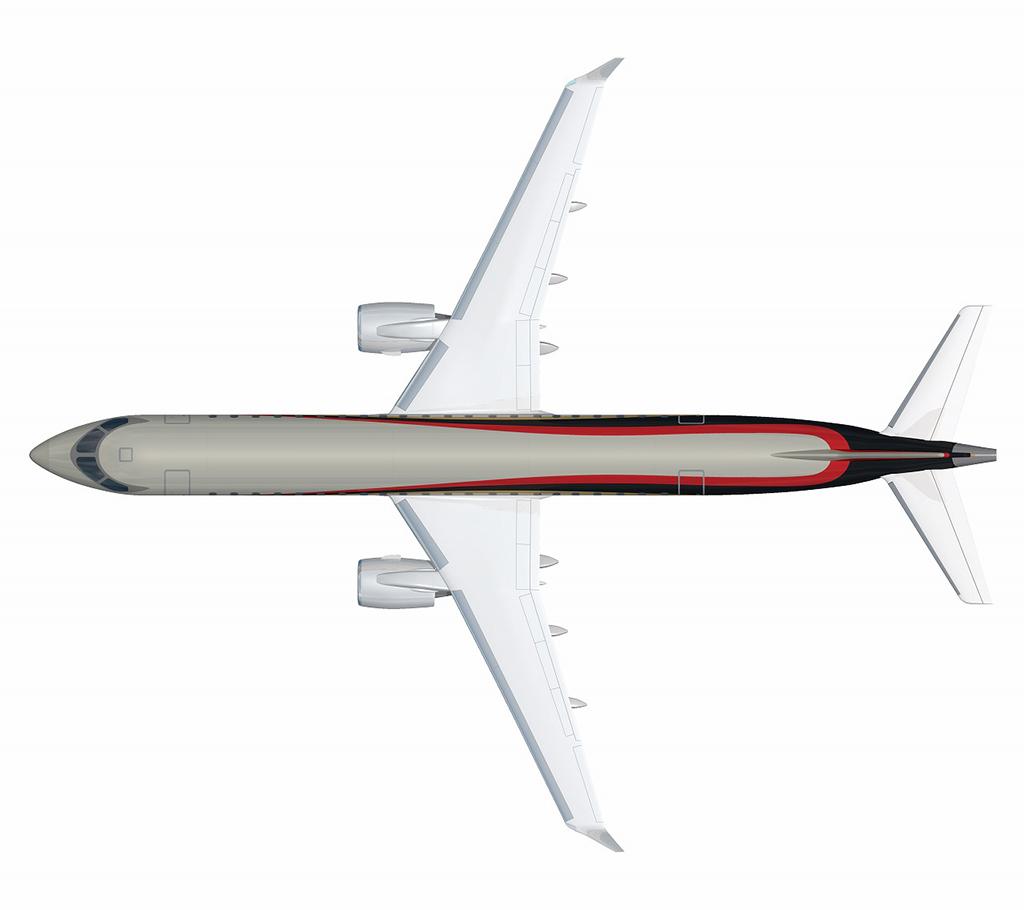 The MRJ’s wing is unusually slender, with an aspect ratio of 9:5. A slender wing should be heavy, but the designers mitigated that problem by reducing sweep, which they could do thanks to what they regarded as an advanced aerofoil design and because they accepted a moderate cruise speed, Mach 0.74. 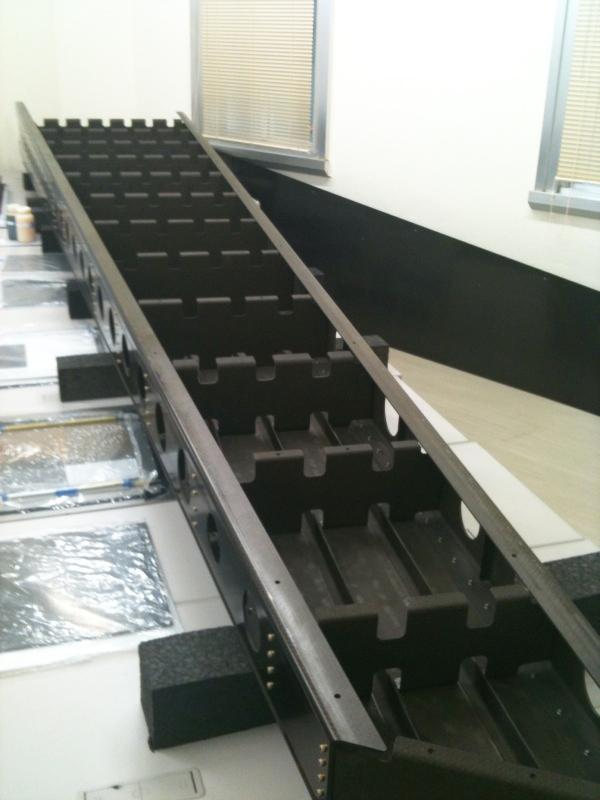 While Mitsubishi Aircraft backed away from a composite wing, the MRJ retains a tail made of a carbon-fiber structure formed with A-Vartm, a vacuum-assisted resin transfer process that uses an oven rather than an autoclave for curing. This is an engineering test sample. 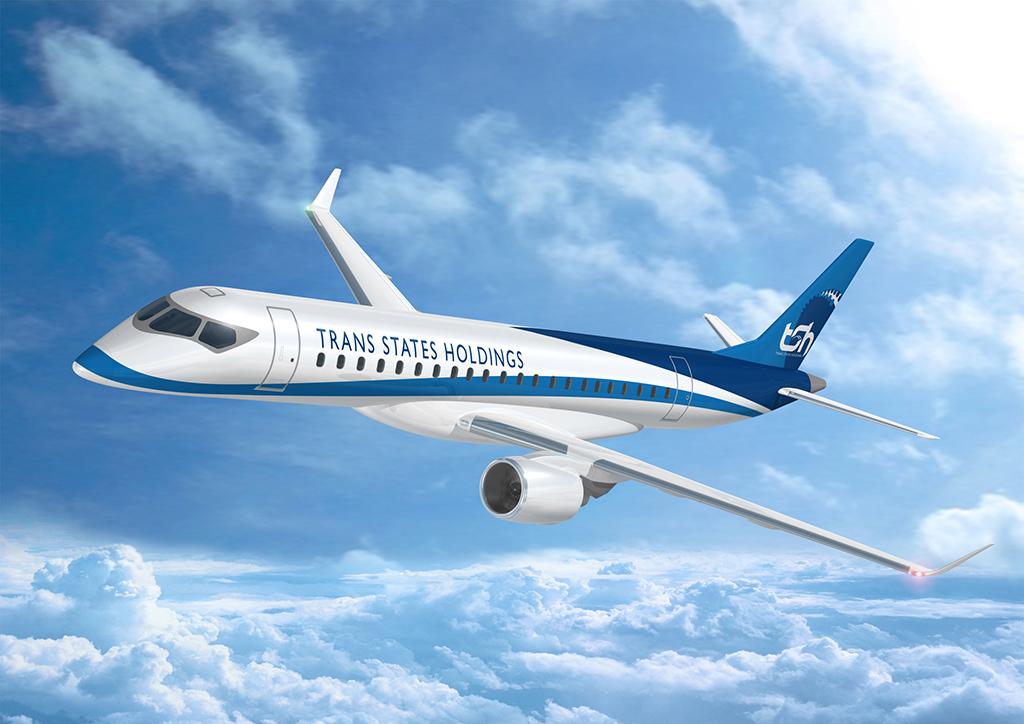 An order for 50 MRJs from Trans States Holdings of the U.S. in 2010 was a breakthrough for the program. Since then, development delays have presented Mitsubishi Aircraft and airframe contractor Mitsubishi Heavy Industries with the challenge of making the aircraft quickly enough to satisfy customers. 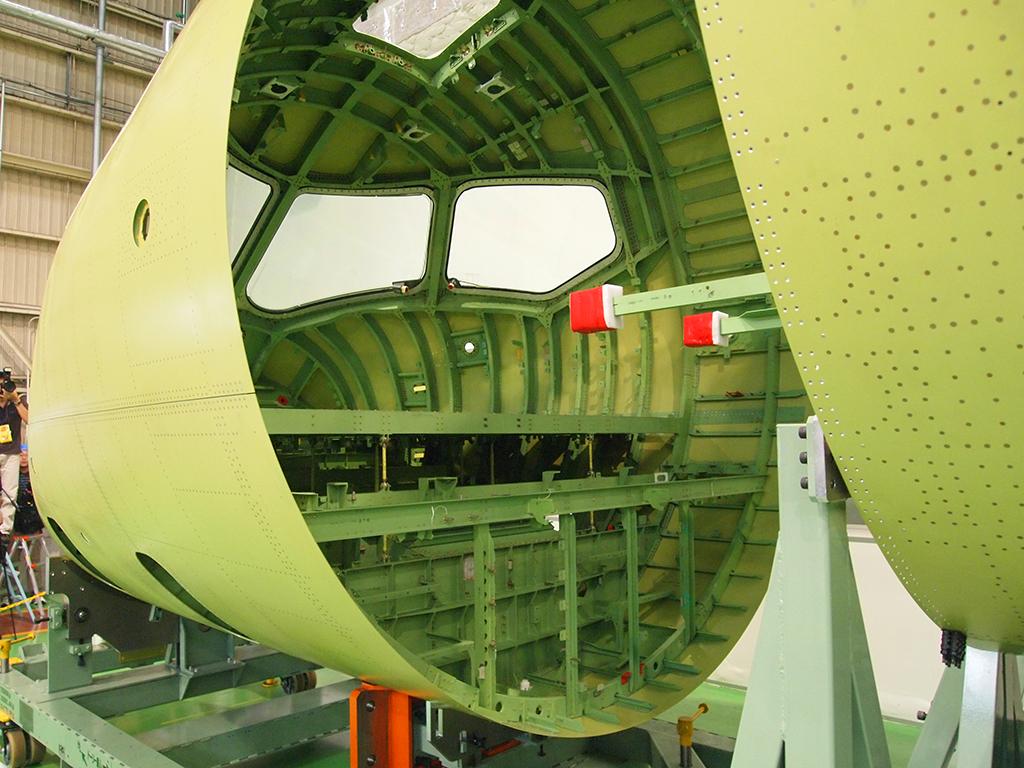 Early aircraft in a production run, especially the flight-test aircraft, are not always put together very well. The manufacturer uses them to learn how to fabricate, so the result can look a bit rough. But when Aviation Week inspected major modules of the first MRJ in 2013, no imperfection could be found. Panels were tightly aligned, fasteners were evenly placed and properly upright, and nothing seemed to have been reworked. 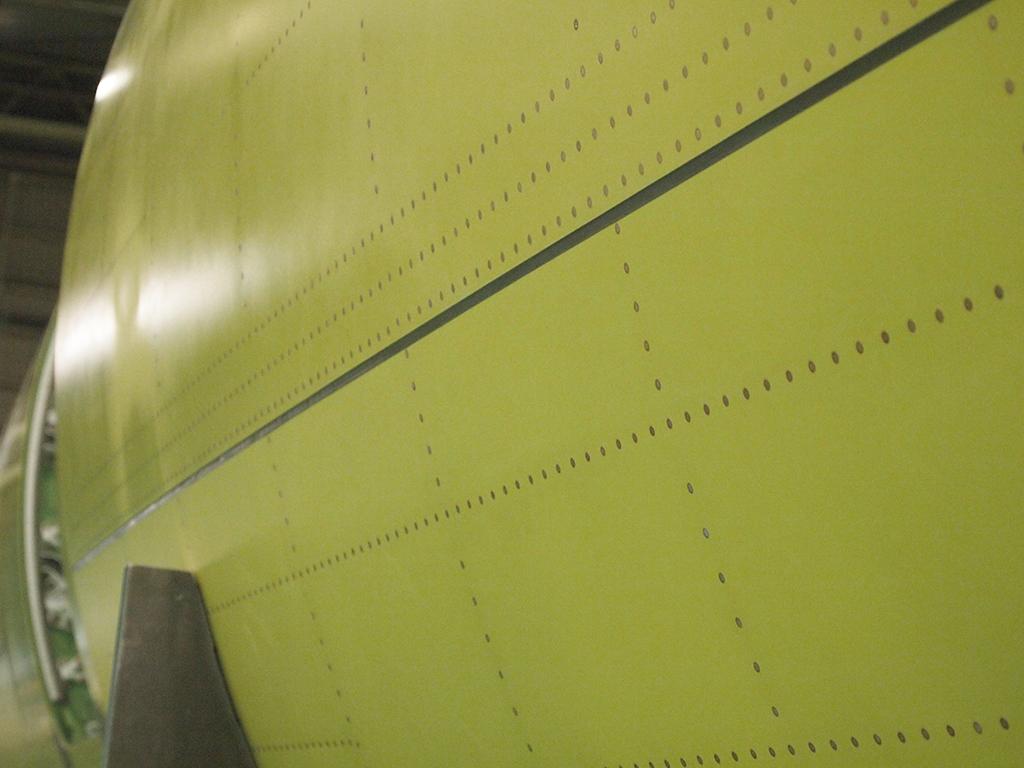 Mitsubishi Aircraft says precise fabrication, simplifying assembly, is part of its plan for low production costs. That required additional investment in detail design. Seen here is part of the fuselage of the first flight-test aircraft. 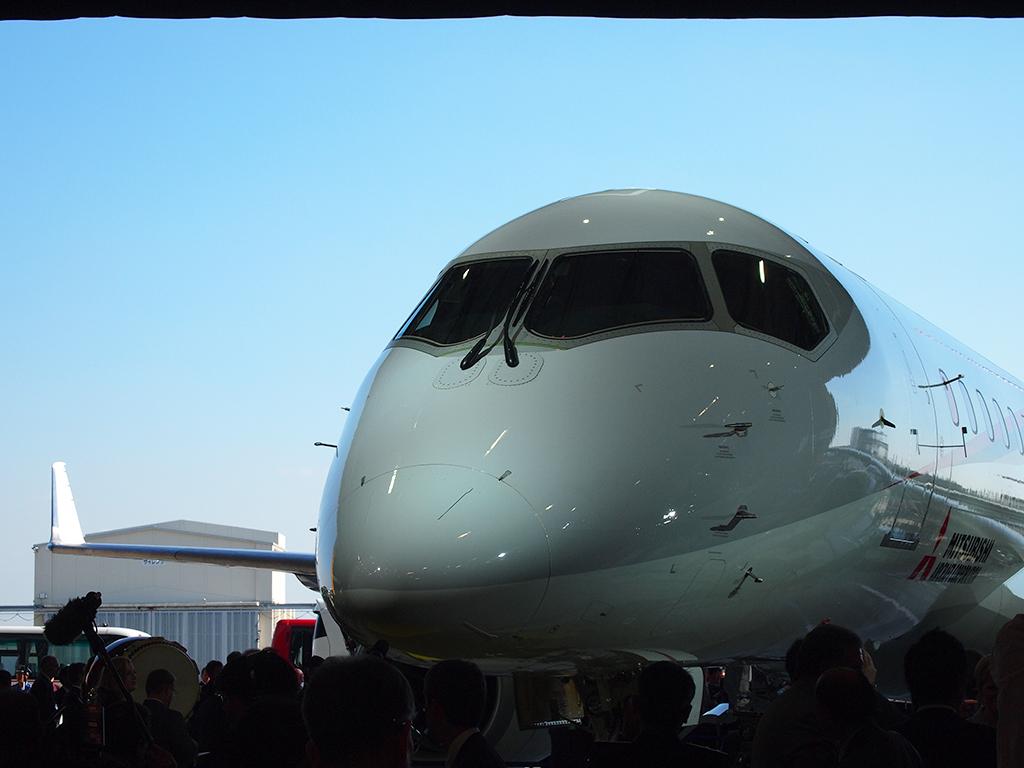 The first MRJ was publicly revealed in October 2014 at Mitsubishi Heavy Industries’ Komaki South Plant, Nagoya, where it had been built. By then the program was running 3.5 years late. 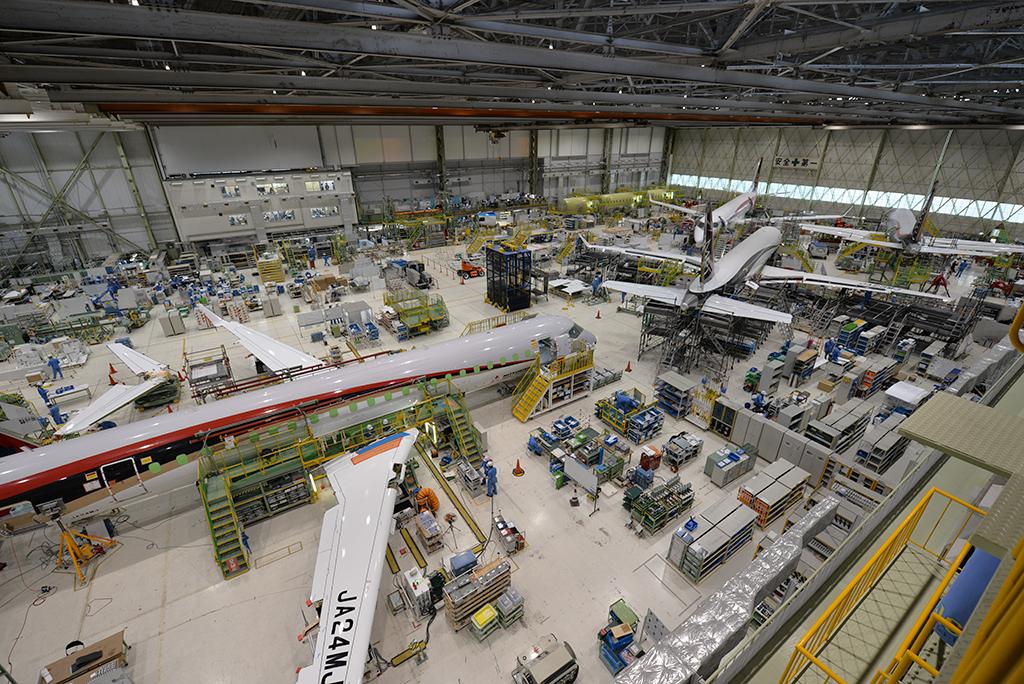 Here are the five flight-test aircraft for the initial MRJ certification program under assembly or modification at Komaki South in 2015. The fifth is the set of unconnected fuselage modules in green primer in the distance. All the aircraft are MRJ90s. Certification of the shorter version, the MRJ70, will follow. 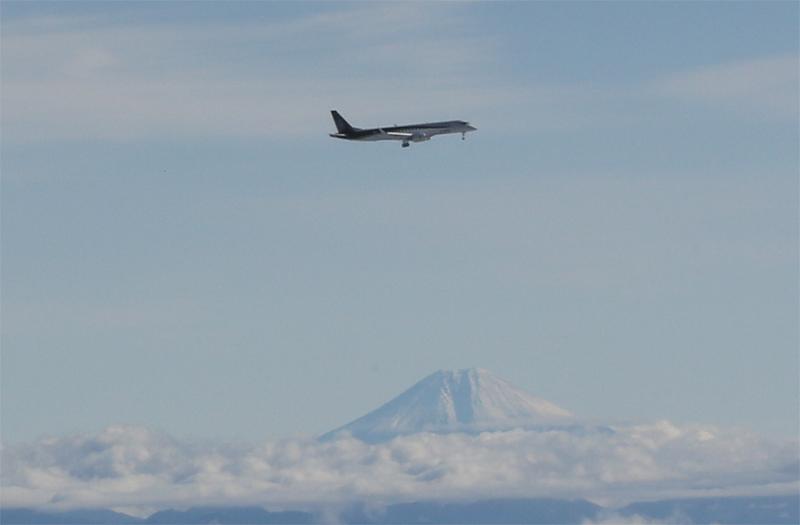 The first MRJ on its first flight, with Mount Fuji in the distance.

The Mitsubishi Aircraft MRJ, which will put Japan back into manufacturing of a complete commercial aircraft after 41 years, took to the sky on Nov. 11. First delivery is due in the second quarter of 2017, nine years after the program was launched and 3.5 years later than first scheduled. The Pratt & Whitney PW1200G engine powers the aircraft, which in its initial version, the MRJ90, has standard all-economy seating for 92 passengers. Read more about the first flight and the program's progress: Test Period Compressed As MRJ Makes First Flight​