How Swiss Repaired A Boeing 777-300ER In Arctic Conditions 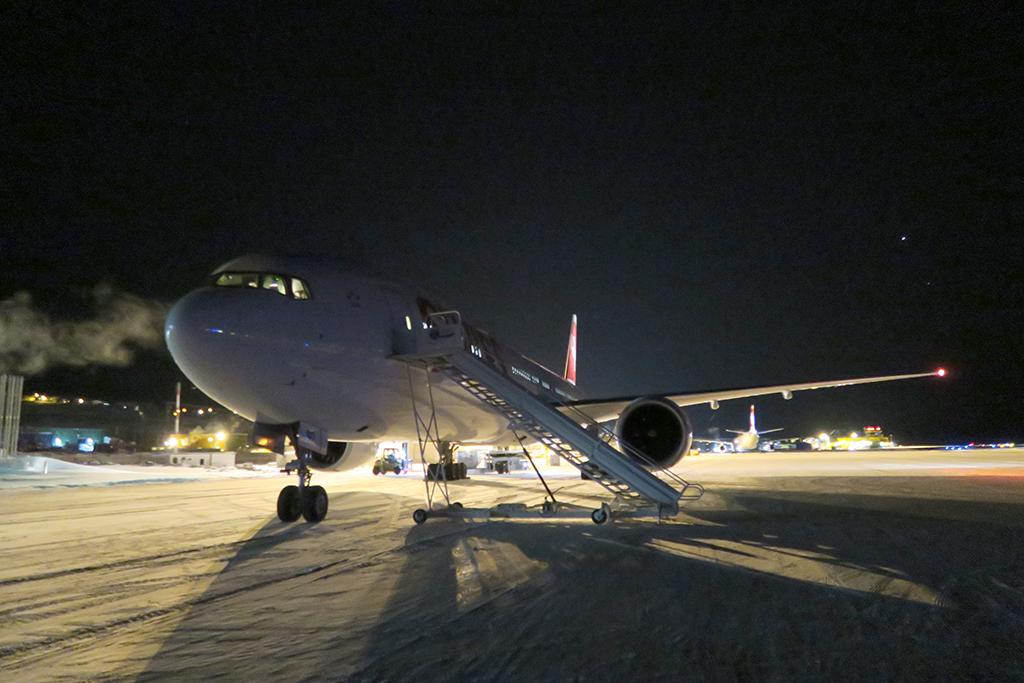 Grounded in Iqaluit, Canada, after the failure of the No. 1 engine, a General Electric GE90-115, a Swiss Boeing 777-300ER diverted to the alternate airport on Feb. 1 en route from Zurich to Los Angeles. Passengers and crew were picked up by a Swiss Airbus A330-300 (background). 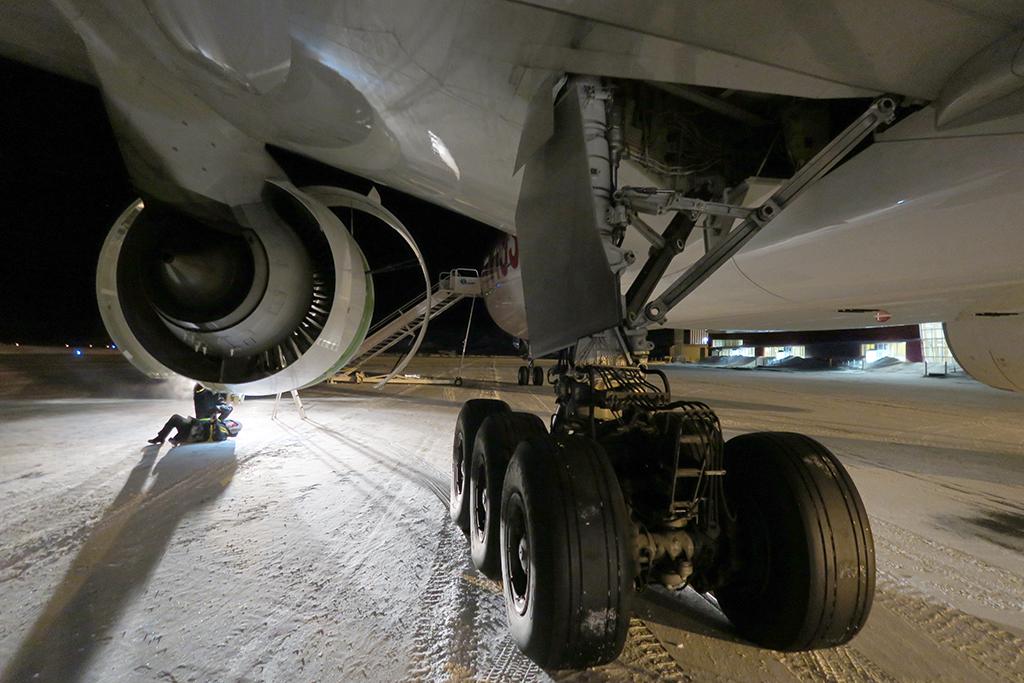 First inspections: Early checks revealed that it would not be possible to repair the engine on-site. Making the logistics work under extreme meteorological conditions required expert teams of GE and Swiss technicians. 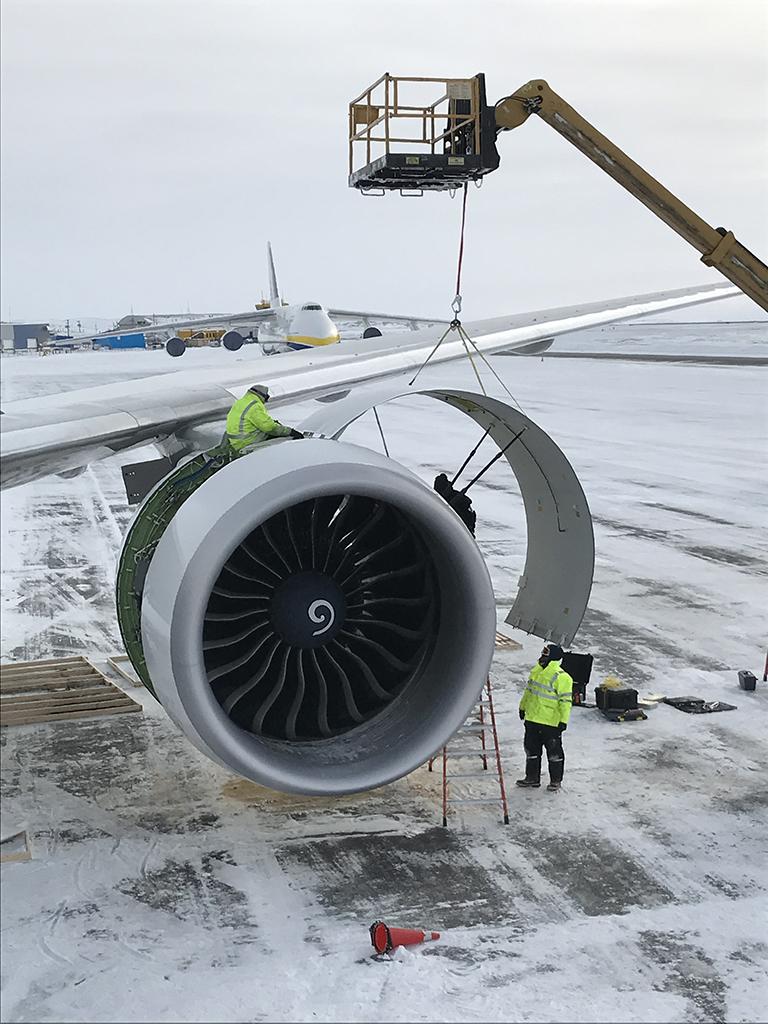 A replacement engine was flown in by an Antonov An-124 from Zurich. The Antonov stayed in Iqaluit in case it was needed to ferry in any potential additional equipment at short notice. 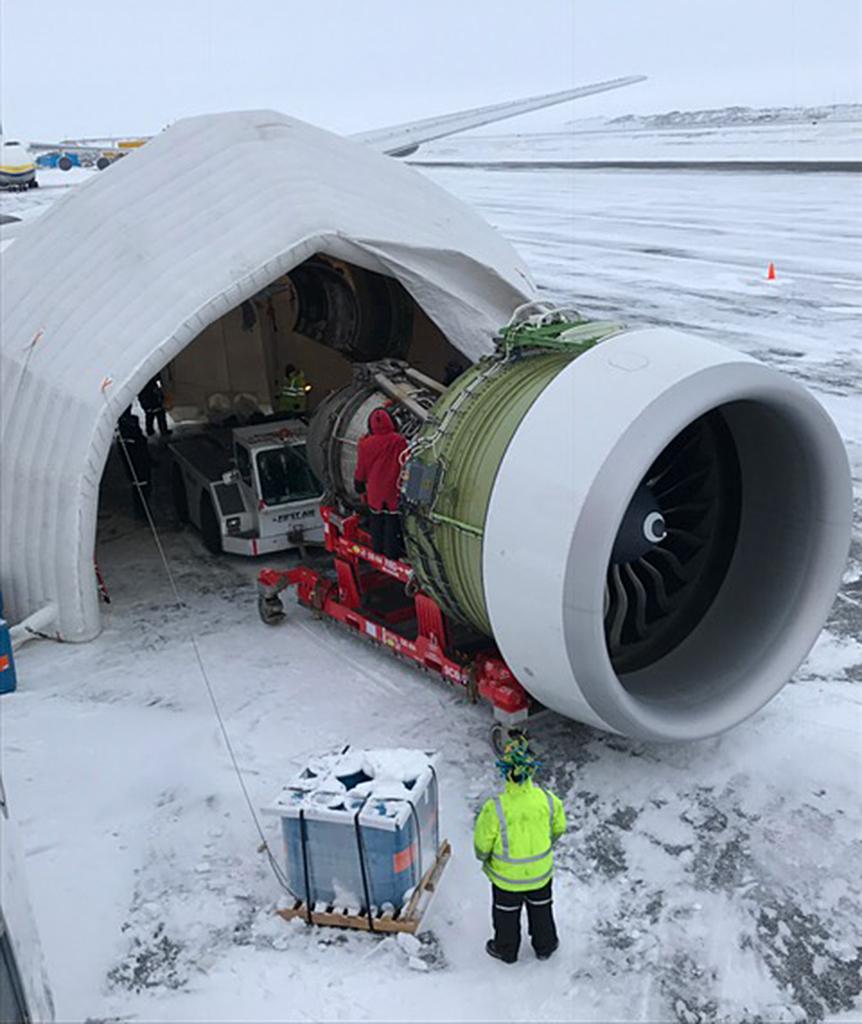 GE technicians placed a heated tent over the engine to enable them to work on it in outside temperatures sometimes lower than -30C (-22F). 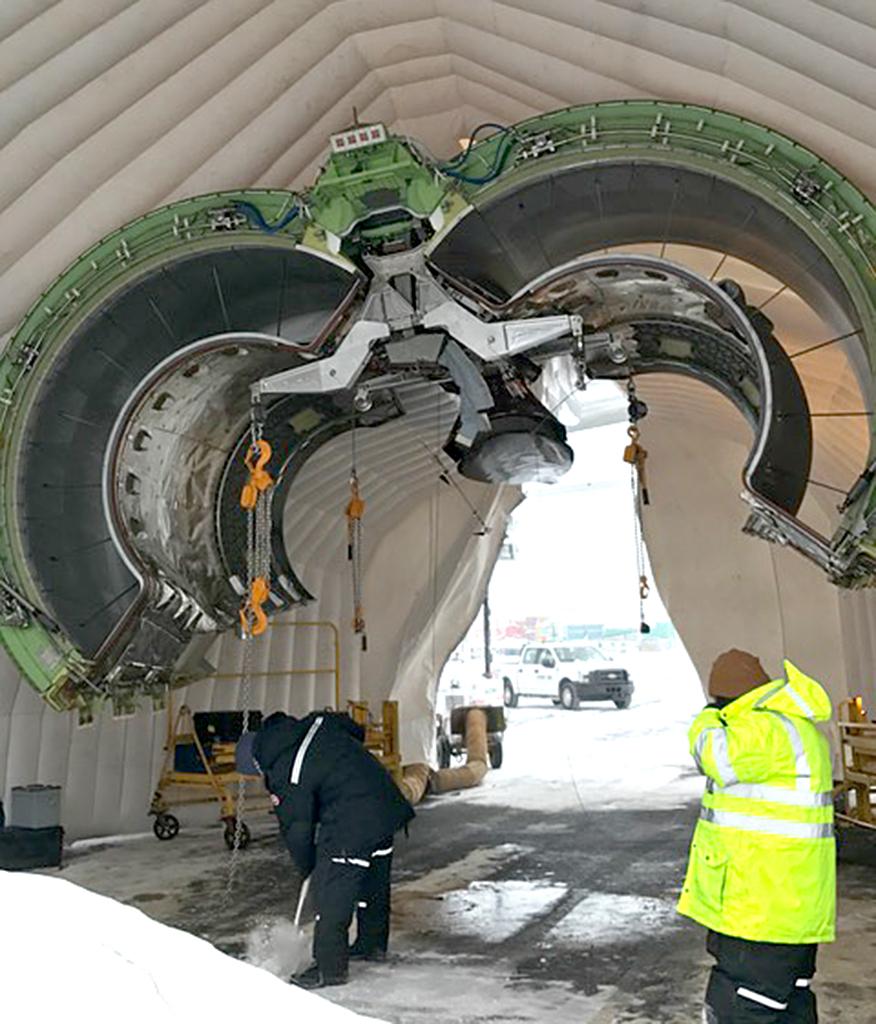 The removal turned out to be particularly tricky because the aircraft’s auxiliary power unit needed to run continuously to keep the aircraft from freezing. 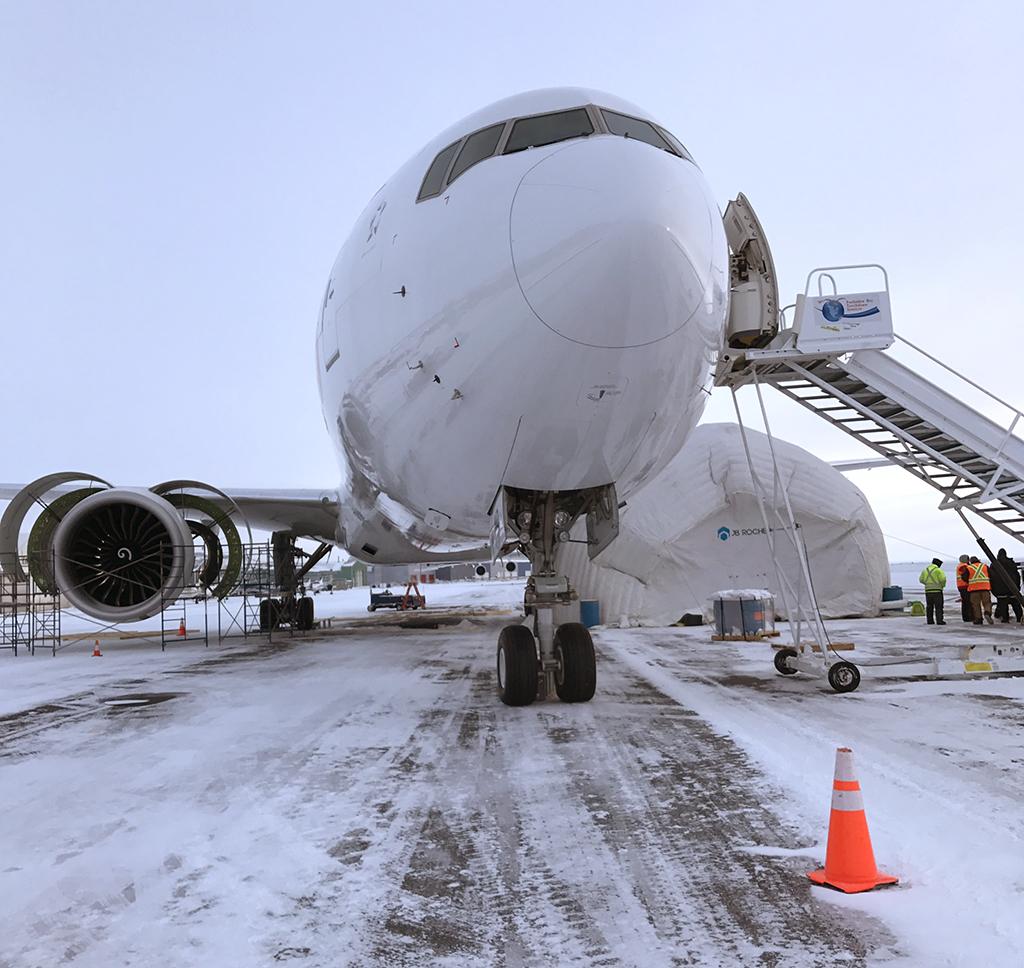 As the No. 1 engine was replaced, checks were made on the other powerplant. The replaced engine was put into a hangar so that Swiss could use it for spare parts, if needed. 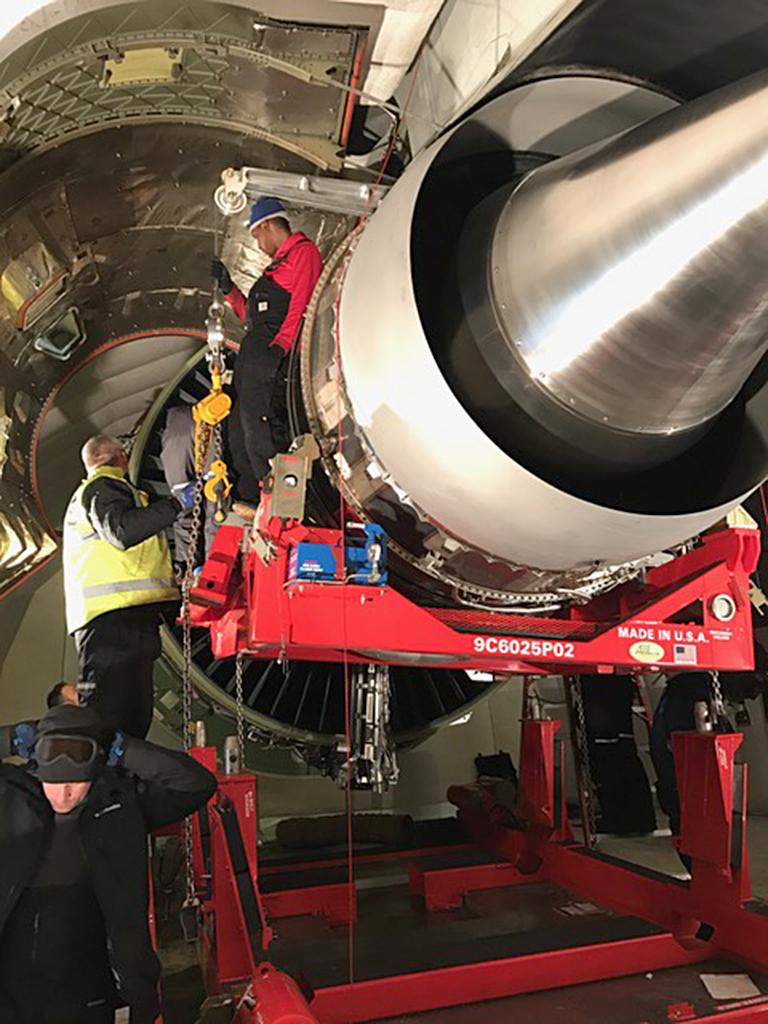 It took the teams more than four days to install the new engine. The aircraft remained on the ground in Iqaluit for one week. 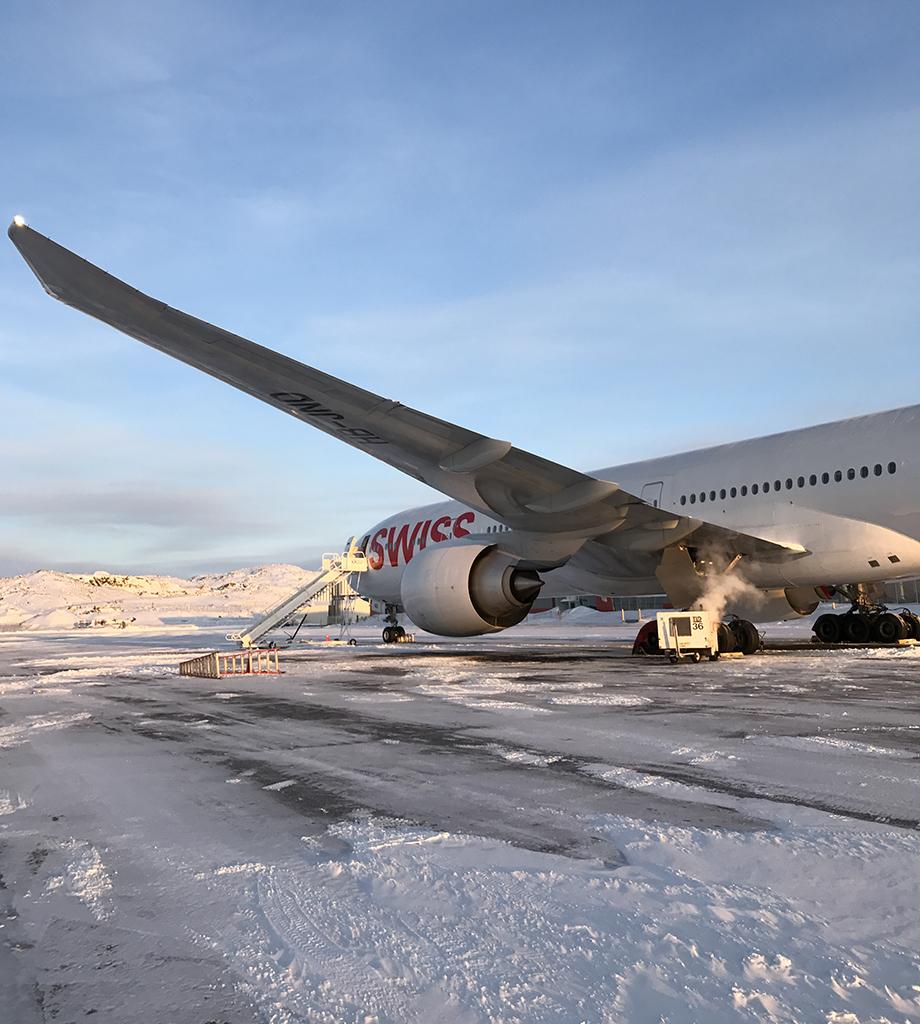 HB-JND is the fourth of eight Boeing 777-300ERs delivered to Swiss. The aircraft arrived at the end of May 2016. At the time of the Iqaluit incident, it had been in operation for only nine months.

Swiss International Air Lines built up a fleet of eight Boeing 777-300ERs in 2016 to operate its densest long-haul routes. While the introduction has generally been smooth, Flight LX40 on Feb. 1, 2017, turned out to be a true test for crisis management. The aircraft was en route from Zurich to Los Angeles when one of the engines automatically shut down. Not knowing the root cause, the crew decided to divert to the nearest airport—in Iqaluit on Baffin Island in Nunavut, Canada—triggering an immense logistical effort to fly out passengers and crew in a replacement aircraft and repair the 777 on-site in harsh conditions.

Read more about this operation disruption: Swiss 777 Repair In Iqaluit Shows Plans Are Important, But So Is Luck

​And how other airlines are handling operational disruptions:

​Airlines Use Apps, Social Media To Better Deal With Disruption