Narrowbodies, Past And Present: Significant Single-Aisles 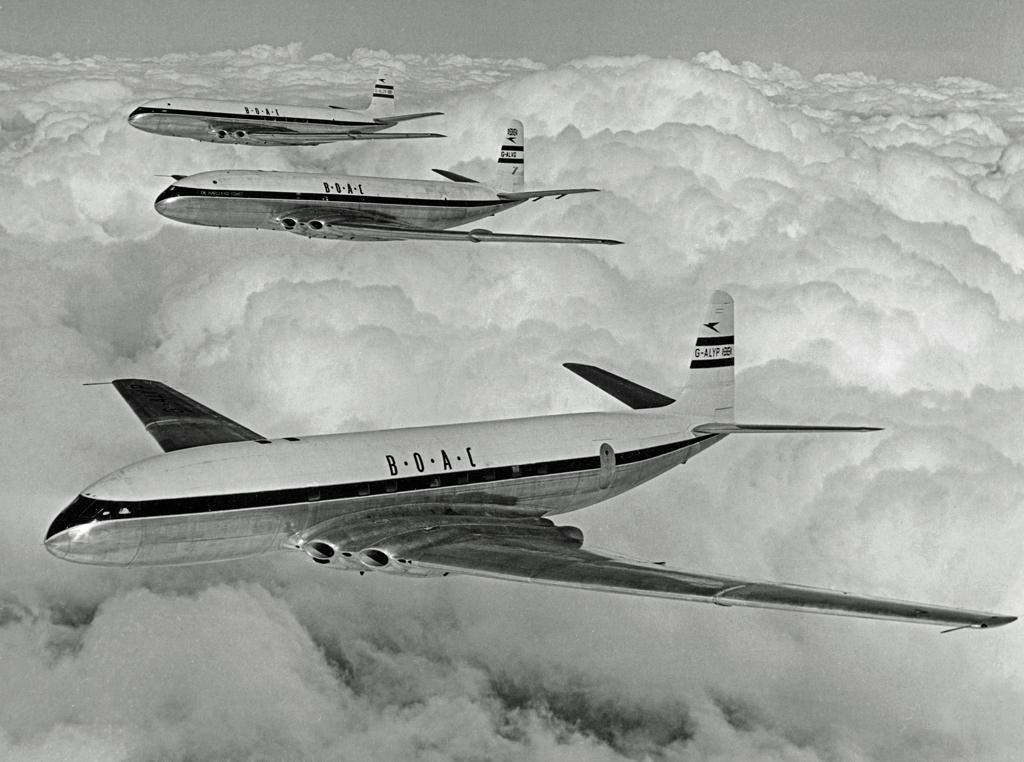 First flying in 1949 the UK-built de Havilland Comet was the world’s first commercial jet airliner. Entering service in 1952, the pioneering aircraft introduced the passenger benefits of jet-borne high-speed travel and smoother, high-altitude flight. However, several early Comet accidents uncovered structural design issues with the then poorly understood phenomenon of metal fatigue. Lessons were shared with other manufacturers but, despite the later development of several improved derivatives, the Comet lost ground and was not a commercial success. Photo credit: FAA 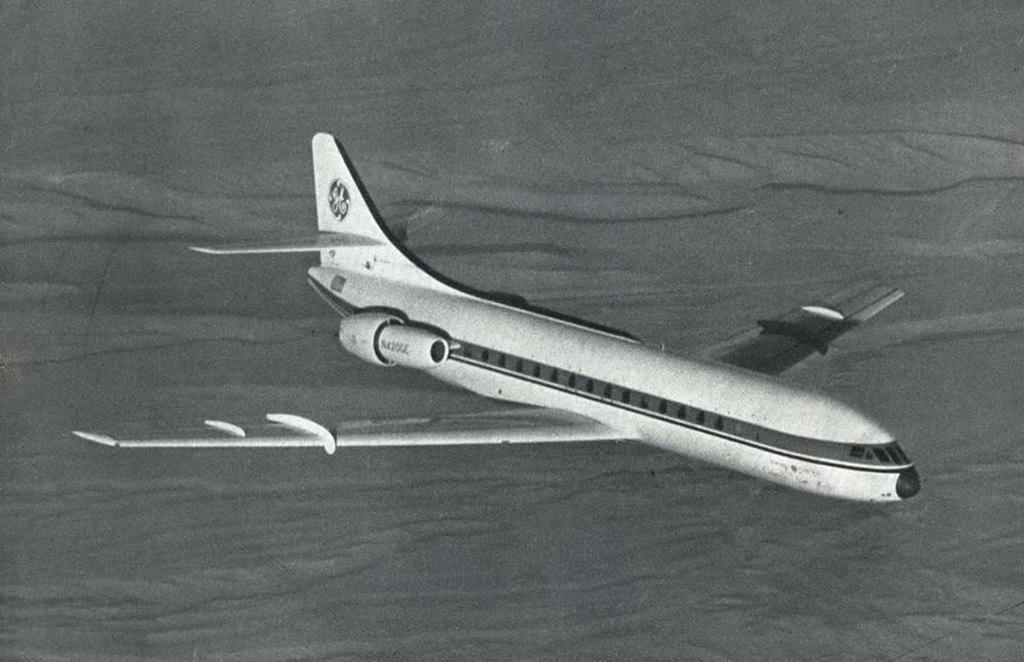 Developed specifically for the short-haul market, the French-built SE 210 Caravelle established the aft-mounted engine and clean-wing configuration that would become commonplace in follow-on jet airliner generations. Making its first flight in 1955, shortly before the similarly sized Tupolev Tu-104, the Caravelle entered service in 1959. The last of more than 280 aircraft produced was retired in 2005. Photo credit: AW&ST Archive 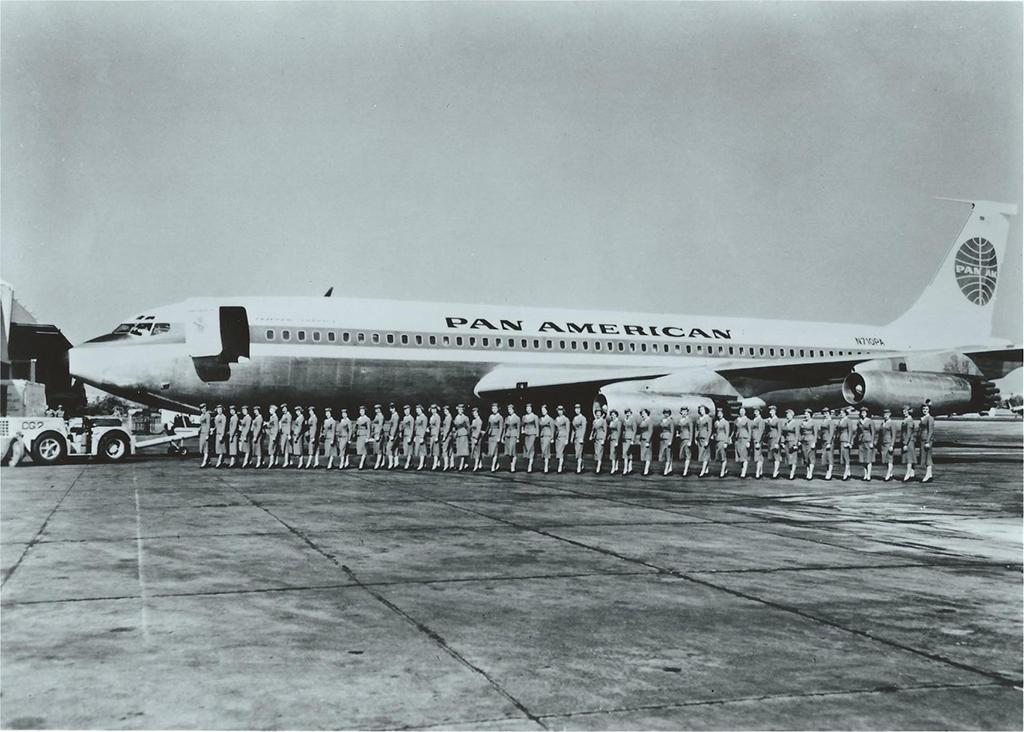 Developed from the Boeing 367-80 tanker/transport prototype, the 707 first flew in 1957 and entered commercial service with Pan American World Airways in 1958. Combining swept wings and podded, wing-mounted engines, the 707 set the configuration standard for follow-on generations of single- and twin-aisle airliners. The 707 also established Boeing’s early lead in the commercial market, with production of all variants—including the shorter-body 720—exceeding the combined sales of its western-built rivals: the Convair CV-880/990, Douglas DC-8 and Vickers VC10. Photo credit: AW&ST Archive 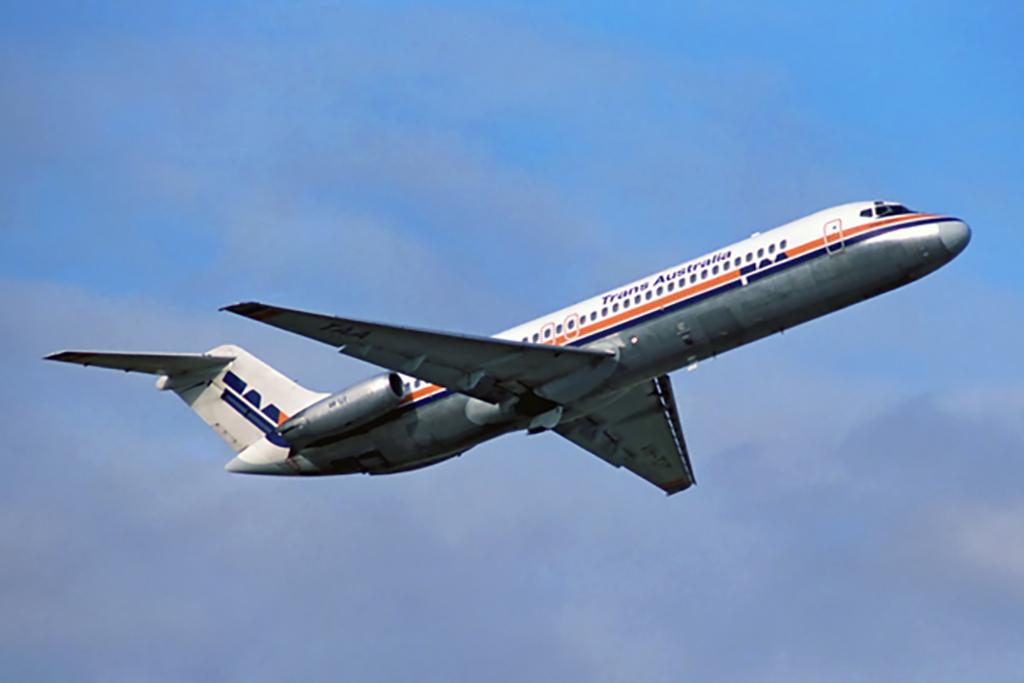 The most successful of the first generation of T-tail, short haul airliners, the DC-9 established an early sales lead over competition from the similarly sized BAC One Eleven and Fokker F.28. The DC-9 made its first flight in February 1965 and the type entered service with Delta Air Lines in December the same year. Although production of the DC-9 ended in 1982, the model laid the foundation for a series of follow-on stretched and re-engined derivatives, including the McDonnell Douglas MD-80, MD-90 and MD-95/Boeing 717—the latter of which marked the end of line when production ceased in 2006. Photo credit: AW&ST Archive 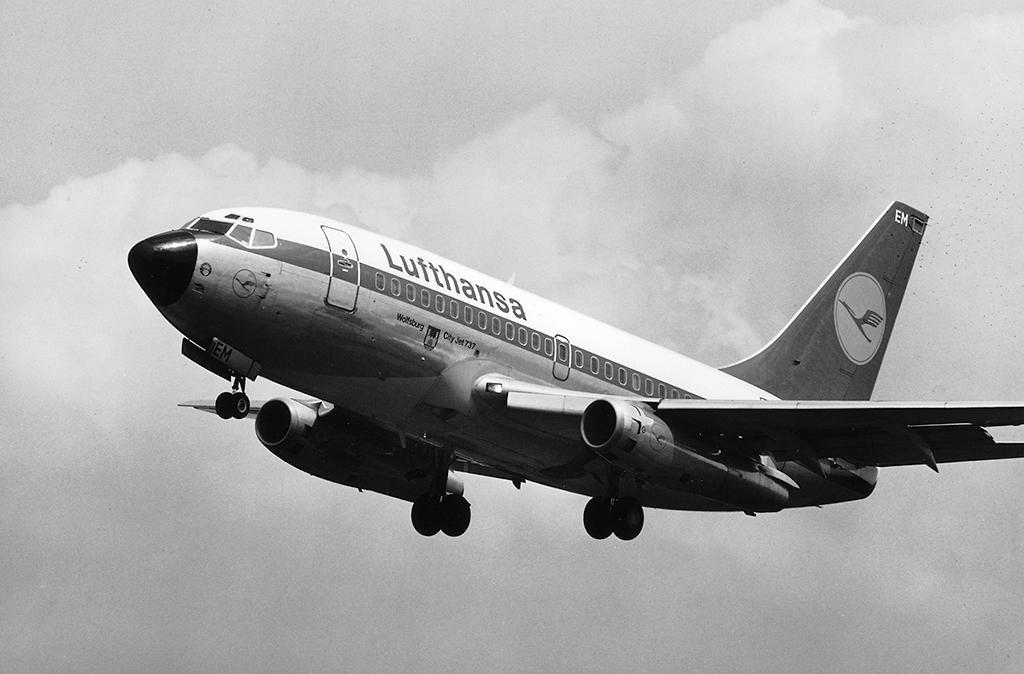 Originally developed to compete with the DC-9 and supplement the 727 on shorter routes, Boeing’s “baby” 737 was the company’s smallest airliner when introduced into service in 1968. Slow-selling at first, orders picked up in the 1970s with the development of the improved 737-200 Advanced. However, it was re-engining with the higher bypass ratio General Electric-Snecma (now Safran) joint venture CFM56 in the 1980s that transformed the fortunes of the model, which was stretched into three new versions: the 737-300, 400 and -500. Boeing built on this foundation with the launch of the CFM56-7-powered Next Generation 737-600, -700, -800 and -900 in the 1990s, and the CFM Leap-powered 737 MAX family in 2011. More than 10,500 737s of all types had been delivered by late 2019, when production was temporarily halted in the wake of the grounding of the MAX earlier last year. Photo credit: Lufthansa 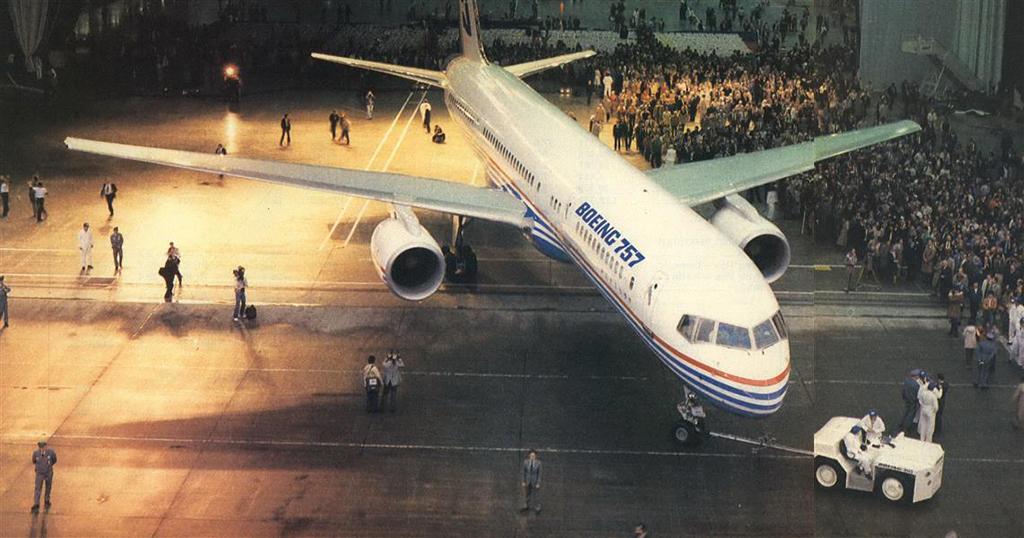 The first single-aisle developed from the outset to utilize higher efficiency larger bypass turbofans, the 757 originated as a replacement for Boeing’s successful 727 trijet but quickly evolved into a more capable, flexible model. Designed in tandem with the 767, with which it shared a common flight deck featuring the company’s first “glass-cockpit” CRT-based displays, the aircraft made its first flight in 1982 and entered service the following year. The 757 also became the first large twin-engine single-aisle aircraft to be cleared for extended range (ETOPS) over-water flights in 1986. Despite development of freighter versions and the stretched -300 variant, sales slowed as airlines moved toward more affordable 737 and A320 family alternatives. Production ceased in 2004 after the assembly of 1,050 aircraft. Photo credit: British Airways 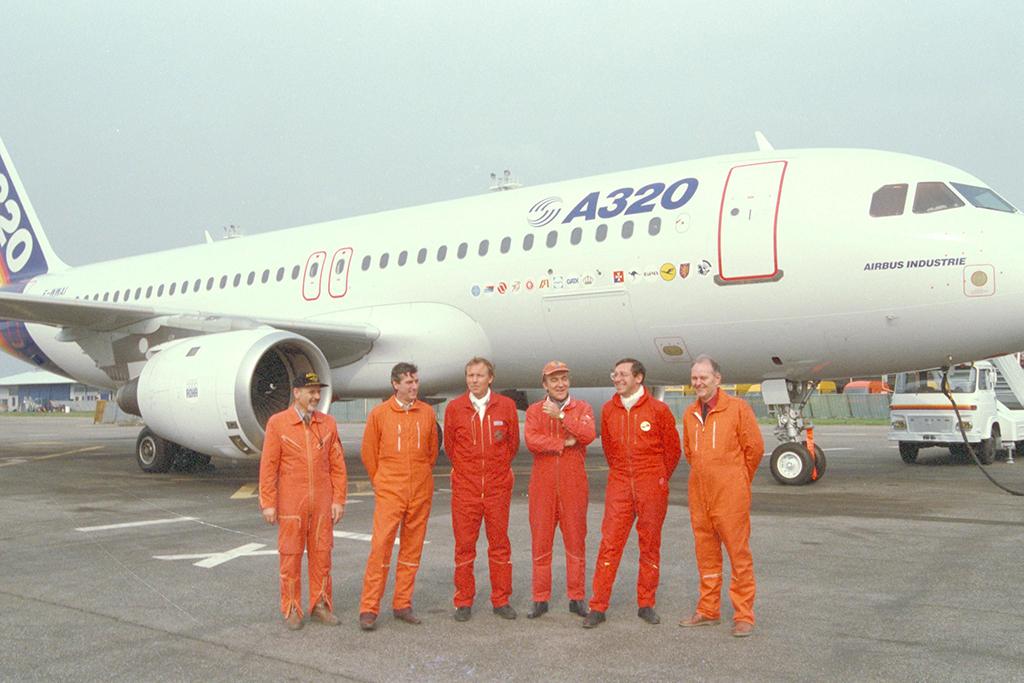 Facing entrenched competition from the Boeing 737 and McDonnell Douglas MD-80, Airbus incorporated an unprecedented set of new technologies into the A320 to help it break into the single-aisle market in the 1980s. Flown for the first time in February 1987, the A320 marked the debut of digital fly-by-wire flight controls, side sticks and active ailerons on a commercial airliner. The A320 provided a platform for shorter A318 and A319 versions as well as the A321 stretch. The emergence of two new engines—Pratt & Whitney’s PW1100G geared turbofan and later CFM’s LEAP-1—cleared the way for Airbus to launch the A320neo (new engine option) in 2010. Entering service in 2016, the popularity of the neo led to the Airbus family overtaking the 737 as the highest-selling airliner in late 2019 with around 15,200 orders. By early 2020 more than 9,300 of all versions had been delivered. Airbus also leveraged the A321 to launch the long range XLR model as a 757 replacement in 2019. Photo credit: Airbus 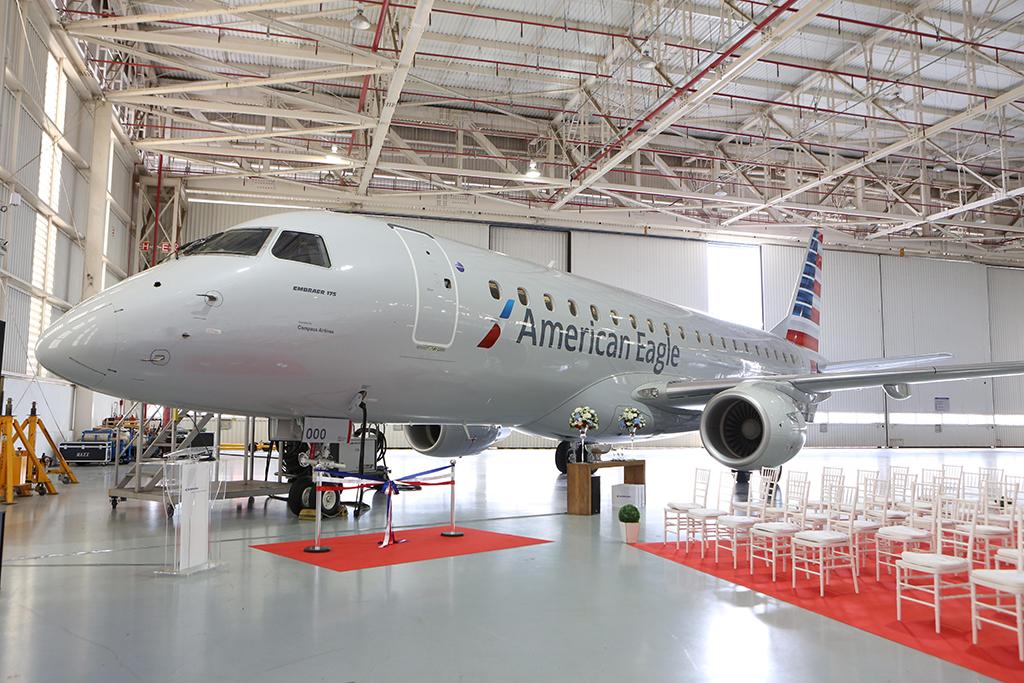 The 1990s saw the emergence of a new generation of regional jets with less than 100 seats specifically designed to cater to short-haul routes and feed the hubs of larger network airlines, particularly in North America. The most successful of the breed were Bombardier’s CRJ (Canadair Regional Jet) family, based on the Canadair Challenger business jet, and the all-new Embraer ERJ135/140/145 series. Both product lines later evolved to offer successively larger regional and small airliner versions, most notably the CRJ900/1000 and Embraer’s E-Jet family, the latter of which is being offered as the re-engined second-generation E-Jet E2. Photo credit: Embraer 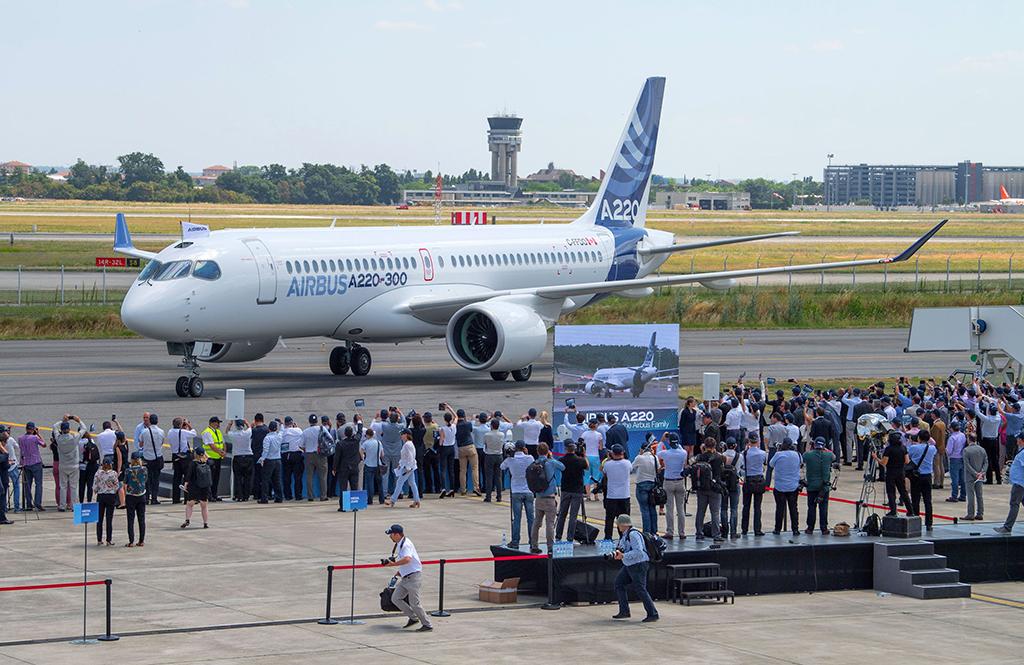 Developed by Bombardier as the CSeries, the original CS100 and CS300 series was acquired in 2018 by Airbus, which renamed them the A220-100 and A220-300. Having evolved from earlier studies of the proposed BRJ-X regional jet project in the late 1990s, the concept had become the CSeries C110/C130 by the mid-2000s and incorporated new materials and systems technology. The availability of Pratt & Whitney’s geared turbofan, which was launched for the Mitsubishi Regional in 2007, provided the technical basis for continuing aircraft development. The PW1500G was selected in November 2007 as the exclusive powerplant for the CSeries, which was officially launched in July 2008. Subsequently renamed the CS100/300, the initial CS100 made its first flight in 2013 with the CS300 debuting in 2015. The CS100 entered service in 2016 followed by the CS300 in 2018. Airbus announced in 2017 it would take a majority stake in the project, which the following year was rebranded the A220. By early 2020 Airbus increased its stake in the program to 75% and will soon deliver aircraft from its new final assembly line in Mobile, Alabama, in addition to the existing site in Mirabel, Quebec. Photo credit: Airbus 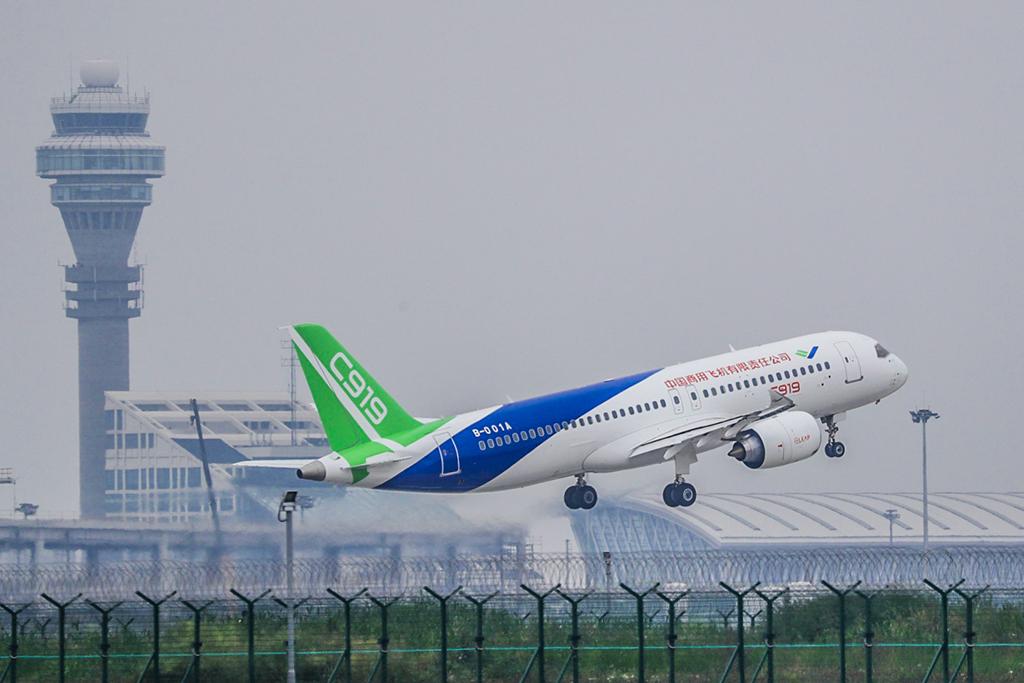 Launched by Chinese manufacturer COMAC in 2008, the C919 is an indigenously designed and developed competitor to the Airbus A320 and Boeing 737. Powered initially by CFM LEAP-1 engines but later to be offered with the Chinese-developed ACAE CJ-1000A, the aircraft is similar to the A320 in both dimensions and overall configuration. Although development has continued since the first flight of the C919 in May 2017 with six aircraft in the flight test program, the slow pace of the certification effort has pushed back deliveries until late 2021 or early 2022. The aircraft nonetheless poses a significant long-term marketing challenge to Airbus and Boeing, both of which have sold substantial volumes of single-aisle aircraft to Chinese operators. Leasing companies and Chinese airlines have collectively placed orders and commitments for more than 1,000 C919s. Photo credit: COMAC

From the world's first commercial jet airliner in 1940s to the emergence of a new generation of regional jets in the 1990s, here's an overview of some of the most significant single-aisles in history.

4 Comments
skywayparkblue
Wed, 11/25/2020 - 02:40
The Canadian Avro beat the Comet into the air. Less advanced but meant for shorter routes, production may have been torpedoed by US support for US industry and it did not go into service. Interestingly, it was about as fast as the unbuilt version of the Republic F-12. The 727 was an advance into the medium haul market and tremendously successful. I believe the Bombardier was based on a project initiated by Bill Lear. The Caravelle was my favorite: a bit slower and therefore quieter and those trianguloid window gave a breathtaking view of the landscape. I think omitting the Concord is a bit odd. Some of the categories had pioneering British efforts, although they were trumped in terms of eventual production numbers.
Bernard Biales
rob.reiter.pp
Mon, 11/30/2020 - 13:17
I have to agree that the omission of the 727, which sold more than 1800 units starting in 1962, is puzzling. I would think it would have to be considered a "significant single aisle" aircraft, particularly given its service in the passenger and freight markets over the last nearly 60 years.
porkwerks
Thu, 01/07/2021 - 13:11
Completely agree on the 727 omission. A list of significant narrow body aircraft without it, is incomplete at best.
garyk50
Fri, 04/30/2021 - 13:32
A pleasure to read Mr. Norris.