Behind The Scenes: Boeing's 777-9 Test Aircraft 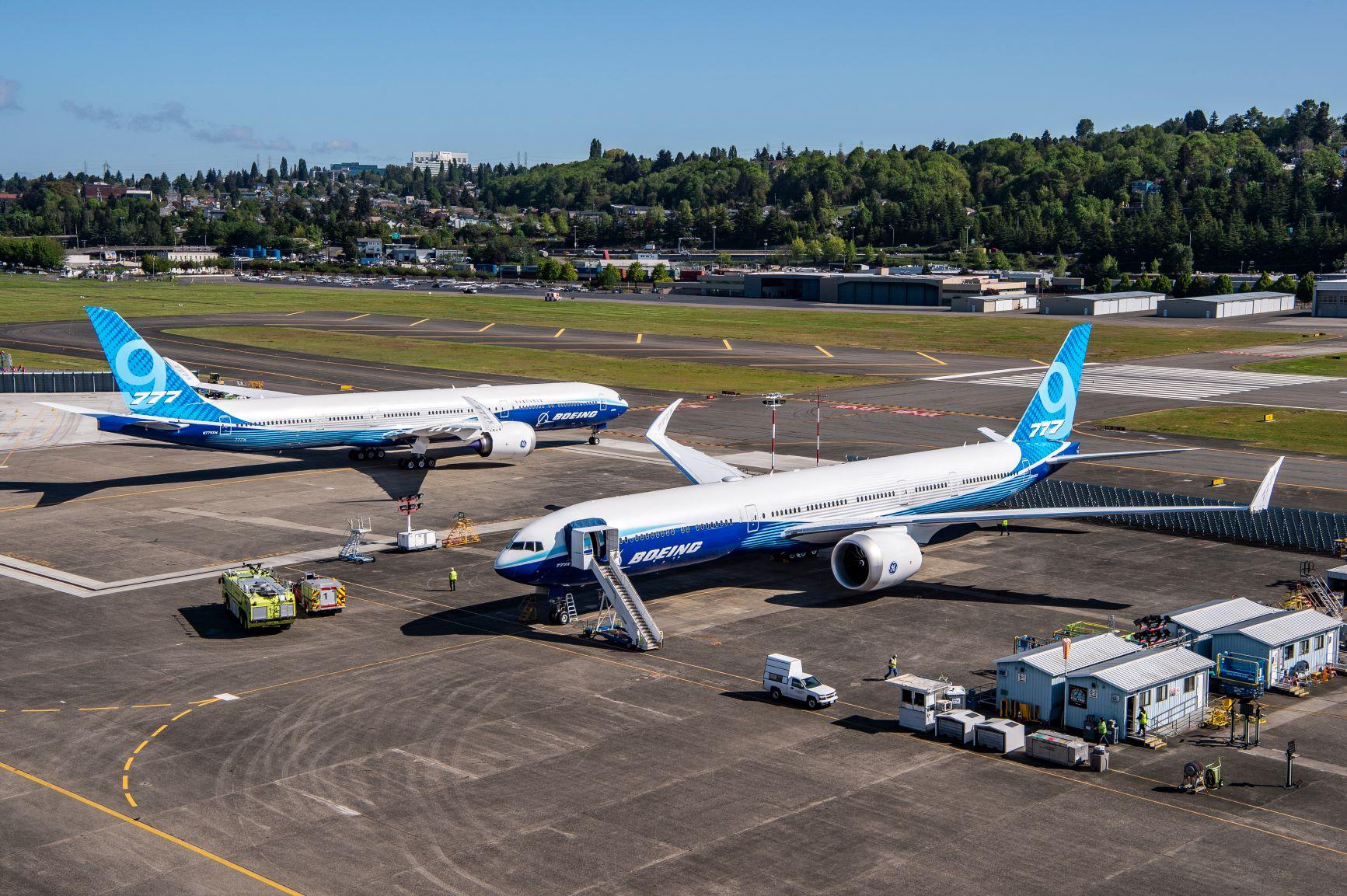 Boeing’s closely scrutinized 777X program has accumulated more than 750 test hours since the first 777-9 made its initial flight in January 2020. The company hopes to receive FAA approval shortly for type inspection authorization which will clear the way for certification tests to begin. Aviation Week received a recent update on the program and given access to one of the 777-9 test aircraft in the run-up to this milestone. Photo credit: Boeing 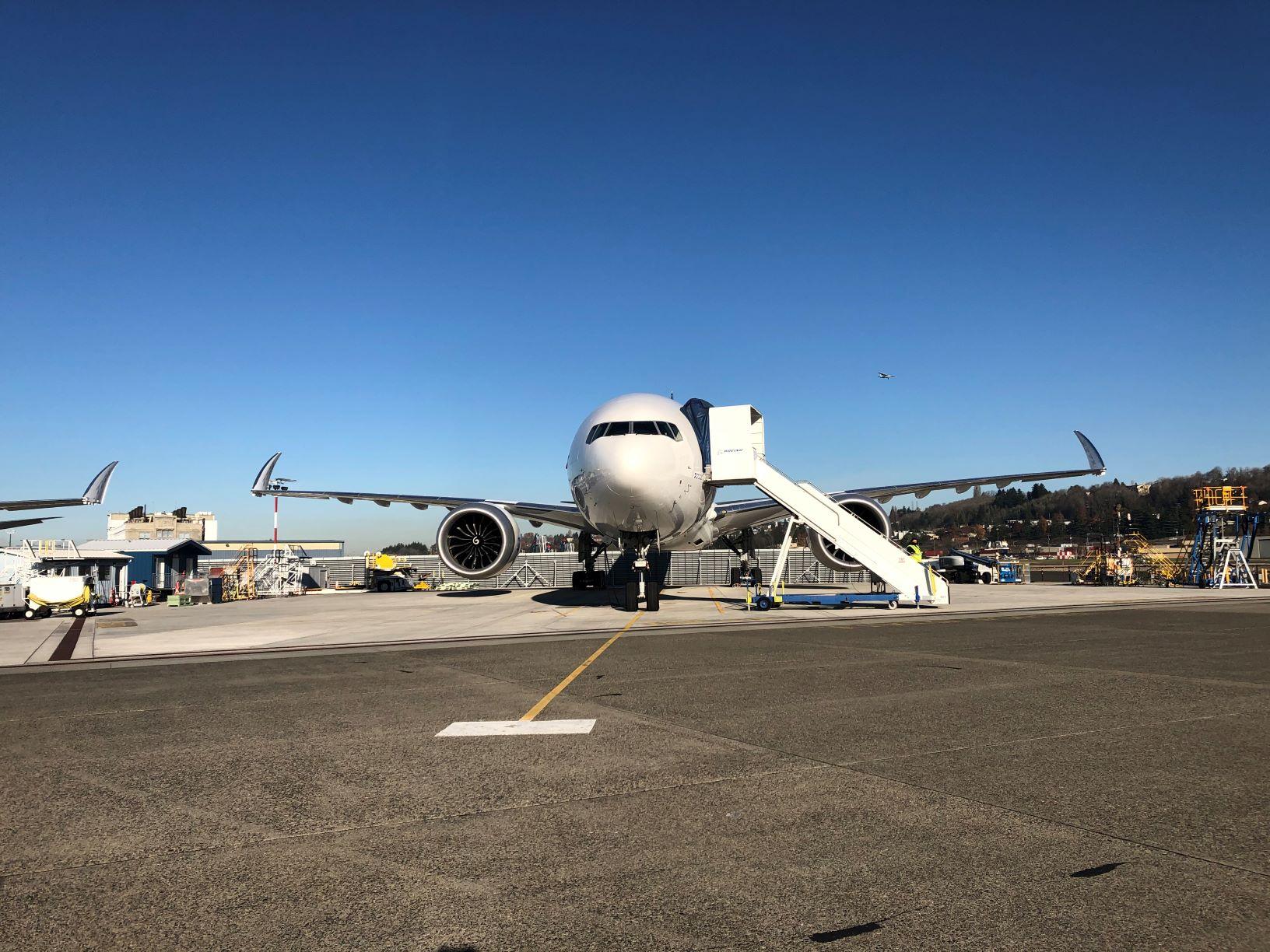 There are four aircraft in the 777X flight test program, the third of which, WH003, first flew on Aug 3. Used to evaluate the General Electric GE9X engines, as well as avionics, flight loads and the performance of the auxiliary power unit, overall flight hours are being kept relatively low to keep the engines as pristine as possible for the start of nautical air miles survey (NAMS) tests which will determine the true fuel burn cruise efficiency of the 777-9. The 777-9 is designed to be 13% better than the 777-300ER and give around 10% lower relative cash operating costs per seat than its closest competitor, the Airbus A350-1000. Photo credit: Guy Norris 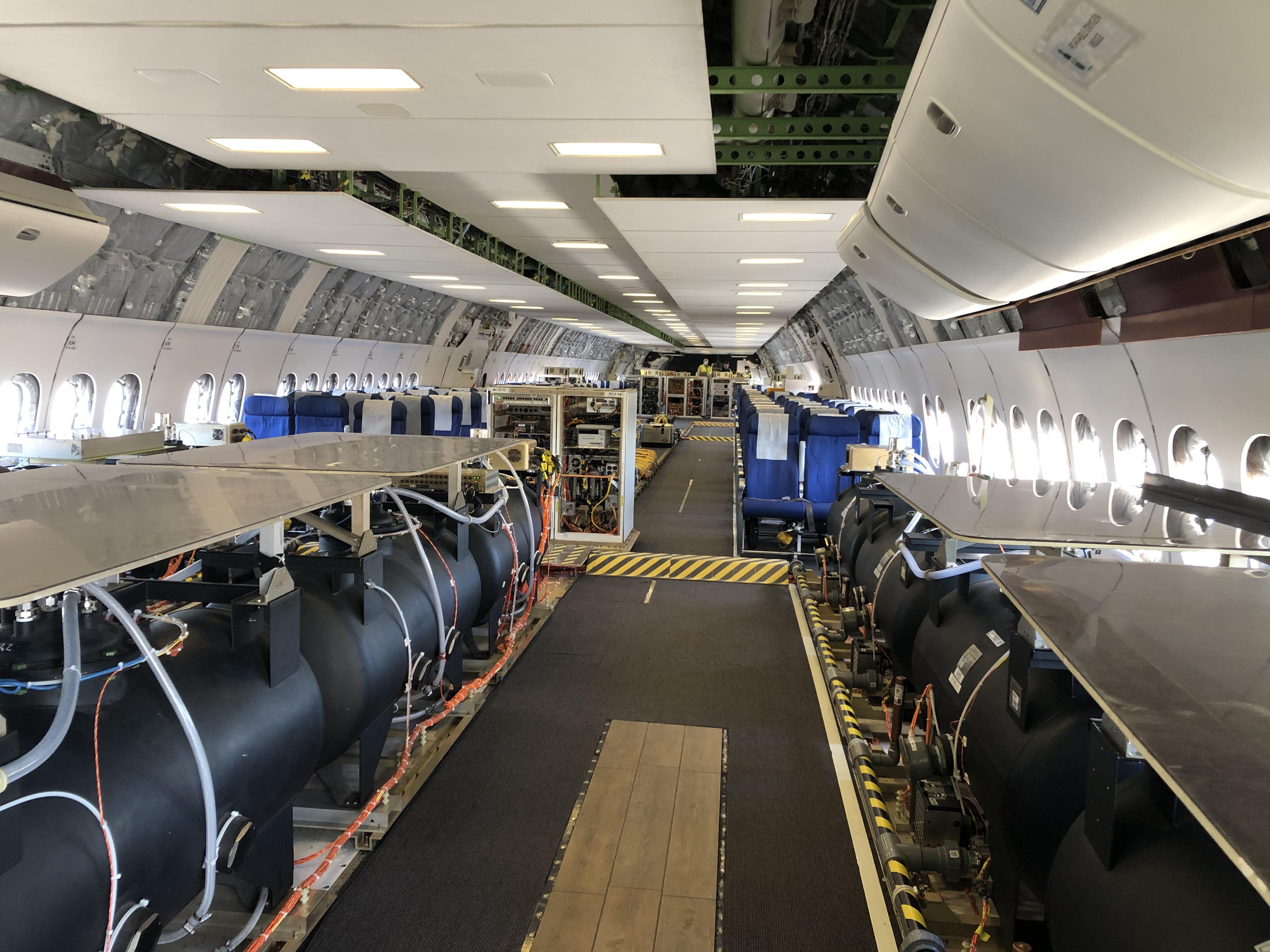 The immense length of the 252-foot-long 777-300ER is apparent in this view of the relatively empty cabin of WH003 despite the rows of flight test workstations and racks of instrumentation and data storage. Most noticeable are the array of 60-gallon water barrels in the forward and aft sections. During some envelope expansion flights water is pumped between the barrels to change the aircraft's center of gravity. Temporary sidewalls and overhead ceiling panels will be replaced during refurbishment with a standard interior. Photo credit: Guy Norris 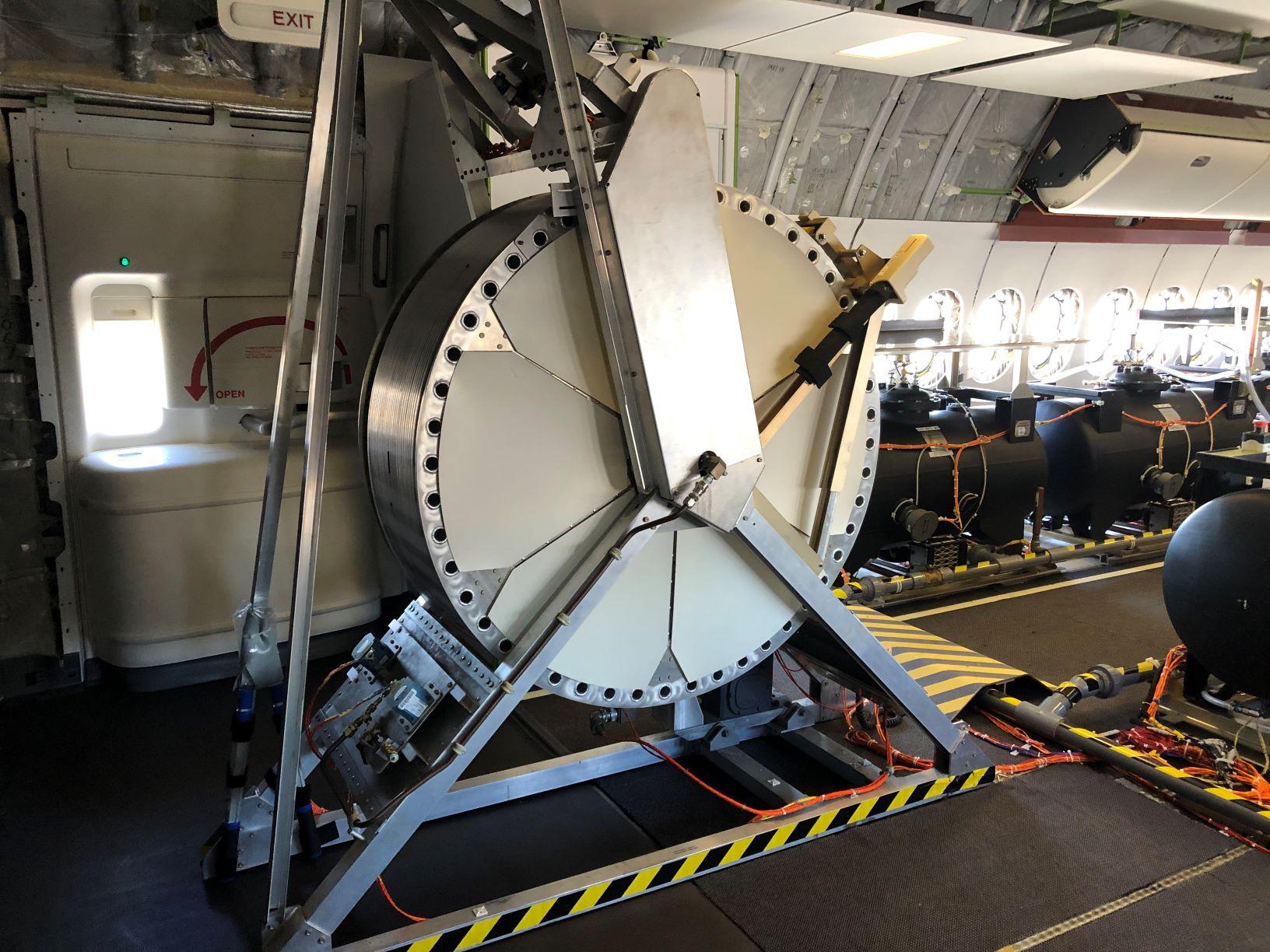 A large reel mounted by the aft pressure bulkhead supports the pressure tube for the trailing static cone which enables flight test engineers to calibrate the static pressure error of the pitot-static system. By trailing at least one fuselage length behind the 777-9 the cone gives an accurate measurement of the ambient atmospheric pressure (static pressure). Static pressure is measured forward of the cone by static ports while the cone itself stabilizes and aligns the ports relative to the freestream airflow. The cable containing the tube can be manually severed if the cone cannot be restowed for landing. Photo credit: Guy Norris 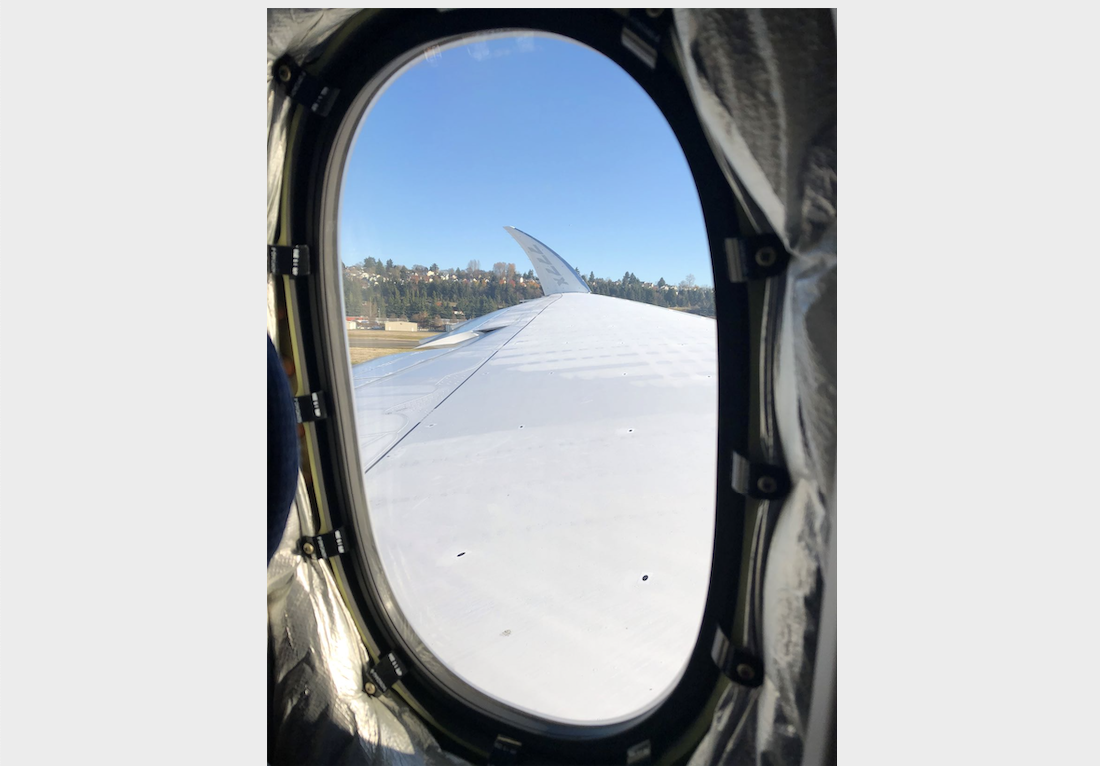 Resembling a winglet, the almost 12-ft. long folding wingtip is seen in the up position in the stall at Boeing Field. The first of its type ever to fly on a commercial airliner, the wing fold feature was developed to maximize aerodynamic performance while simultaneously enabling the 777-8/9 to operate at ICAO Code E standard taxiways, gate and ramp areas in common with the current 747-400 and 777-300ER. When deployed, the folding tips extend overall wingspan to 235.4-ft. This view is taken through a main cabin window which measure 162 sq in. on the 777X compared to 140 sq in. on the legacy 777. Photo credit: Guy Norris 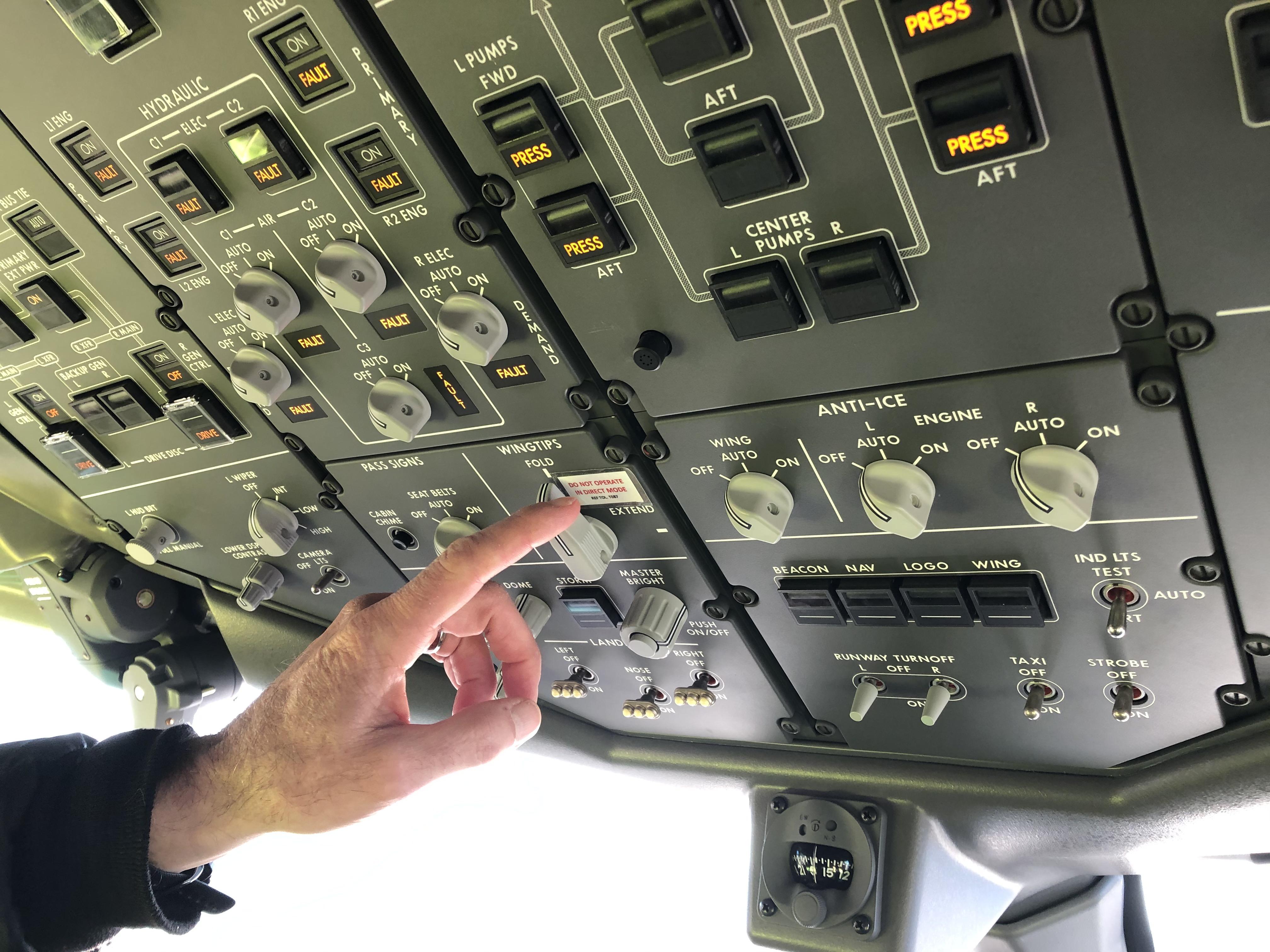 The design and lighting of the wing fold activation switch has been changed as a result of lessons learned during flight tests. The switch, seen here in its original configuration on WH003, is used to command extension prior to take-off. The folding mechanism takes 20 sec. to fully extend or retract the wing tips which are designed to automatically fold up after touchdown as soon as ground speed slows below 50 kt. “We have mostly tested the automatic function to make sure that works and so far it's been bulletproof,” says 777/777X chief test pilot Van Chaney. Photo credit: Guy Norris 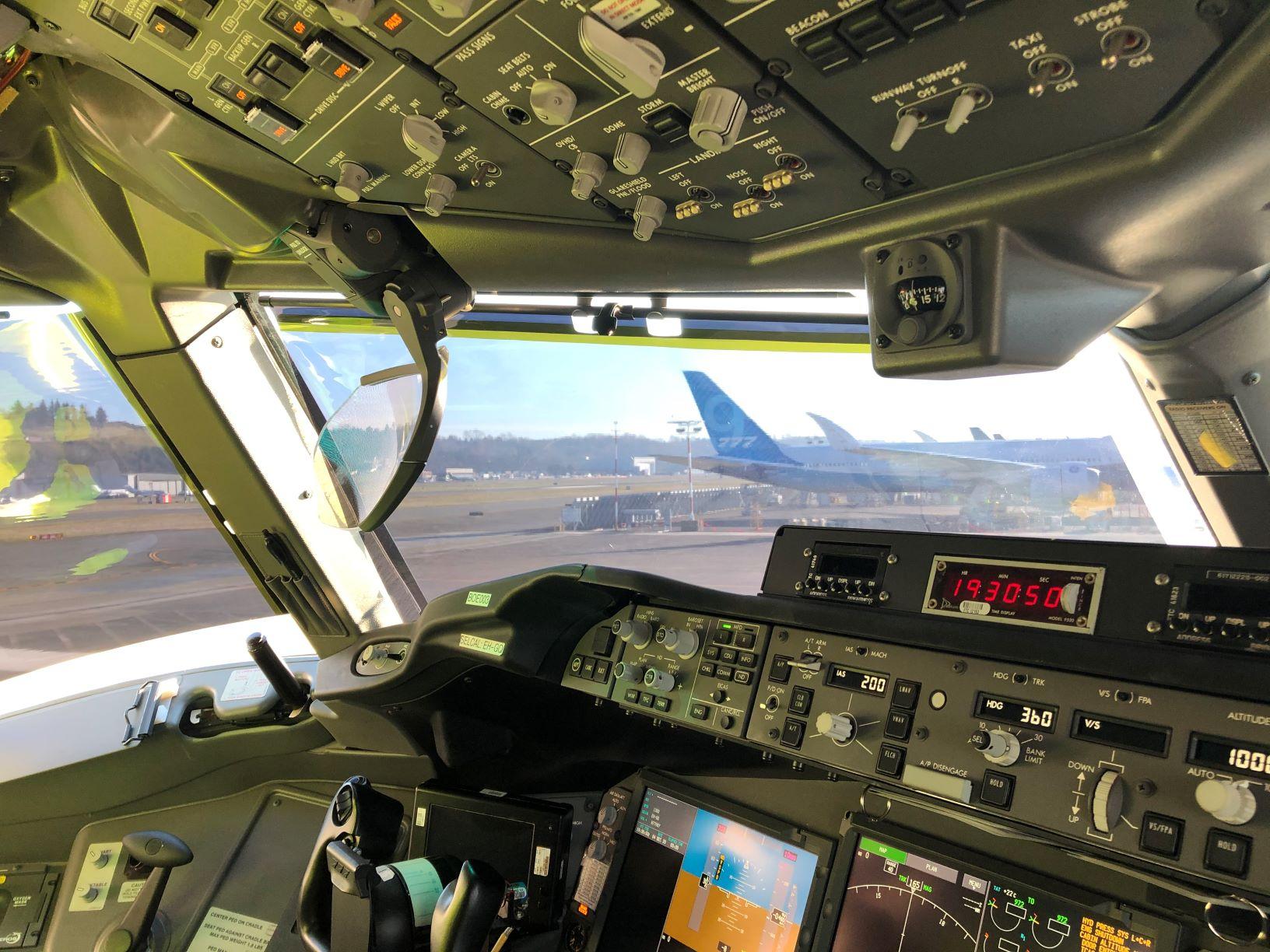 The first 777-9, WH001, is pictured on the Boeing Field flight line through the flight deck windows of WH003. Note the new retractable sun visor design which will be certified for use during take-off and landing, and the nose wheel steering tiller at bottom left. Flight crews say maneuvering the extremely long 777-9 on the ground requires close attention. Photo credit: Guy Norris 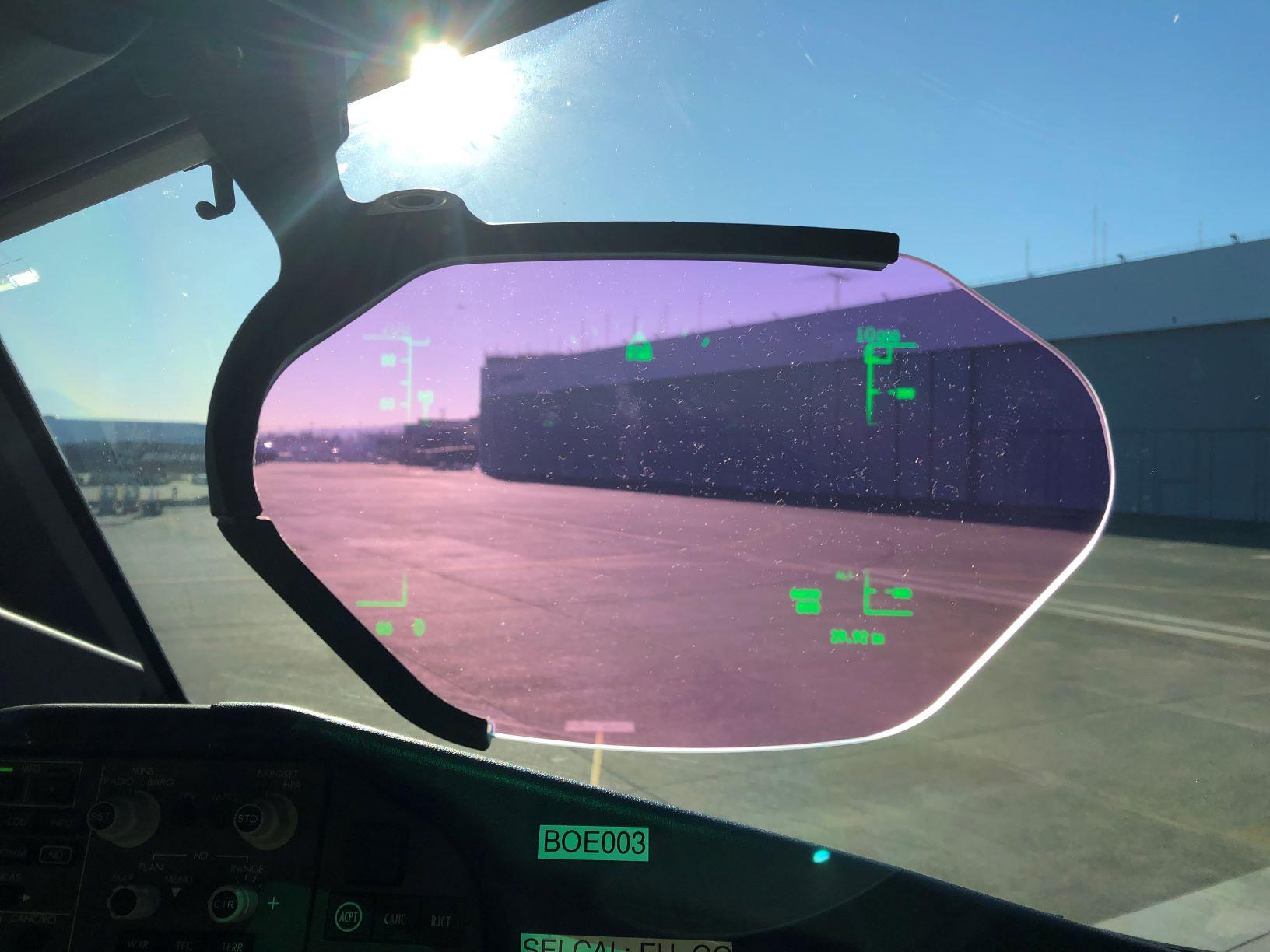 For the first time in a 777, Boeing is offering the option of a Rockwell Collins-developed head-up guidance system or heads-up display (HUD). The Rockwell Collins HUD is standard on the 787 and optional on the 737 MAX and will allow the 777X to be certified to fly to lower landing minima. Photo credit: Guy Norris 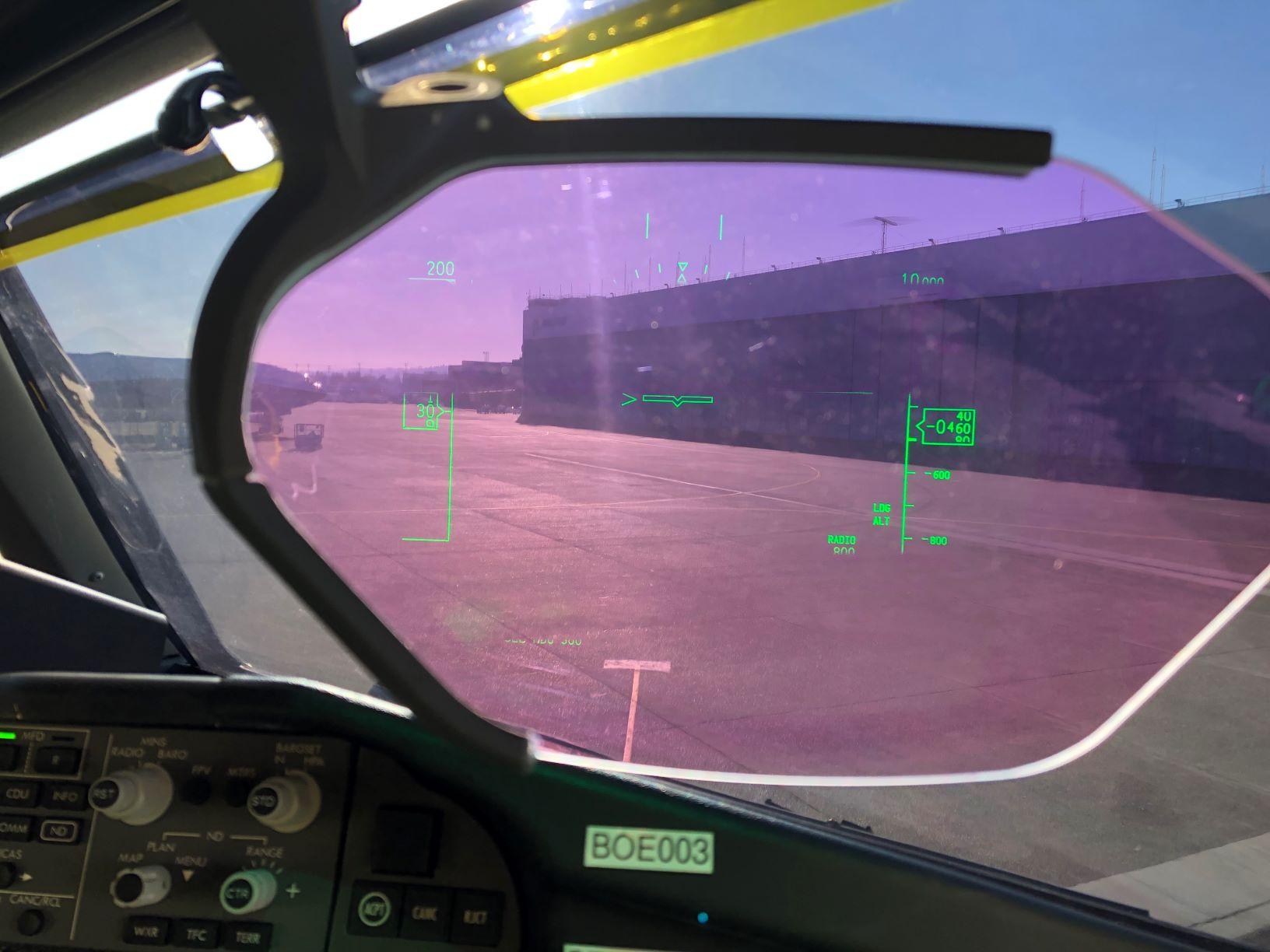 The view through the HUD is unaltered by the sun visor which is seen deployed in the right hand image. Photo credit: Guy Norris 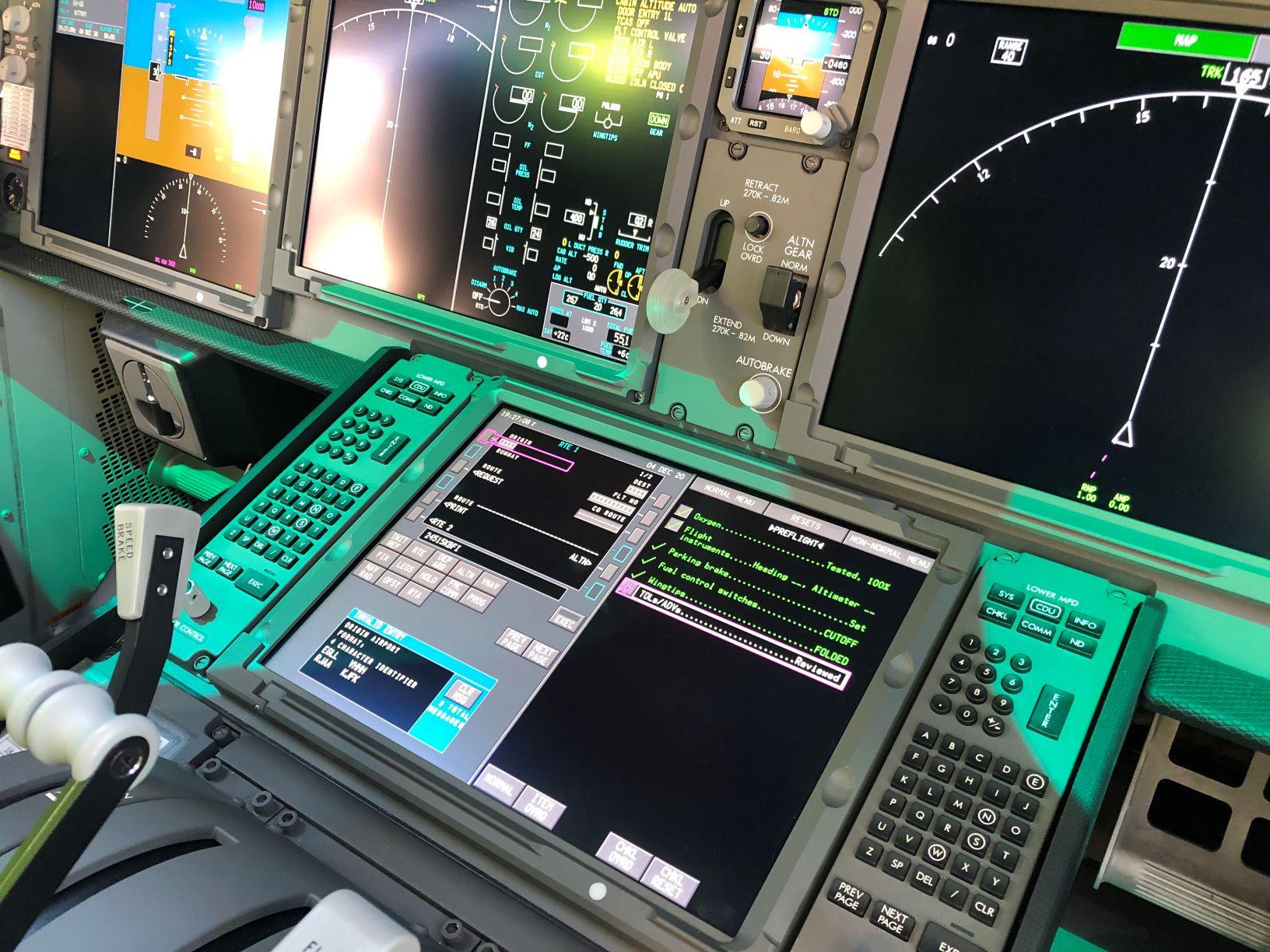 Following initial flight trials on its ecoDemonstrator testbed, Boeing opted to introduce touch screen controls to the 777X flight deck displays. Small indentations are placed at intervals around the display bevels to help flight crews steady their hands while interacting with the system in turbulent conditions. As well as the touchscreens, Rockwell Collins is also supplying the control stand, digital audio system, mode control panel and primary control damper for the 777X, in addition to the flight control module. Photo credit: Guy Norris 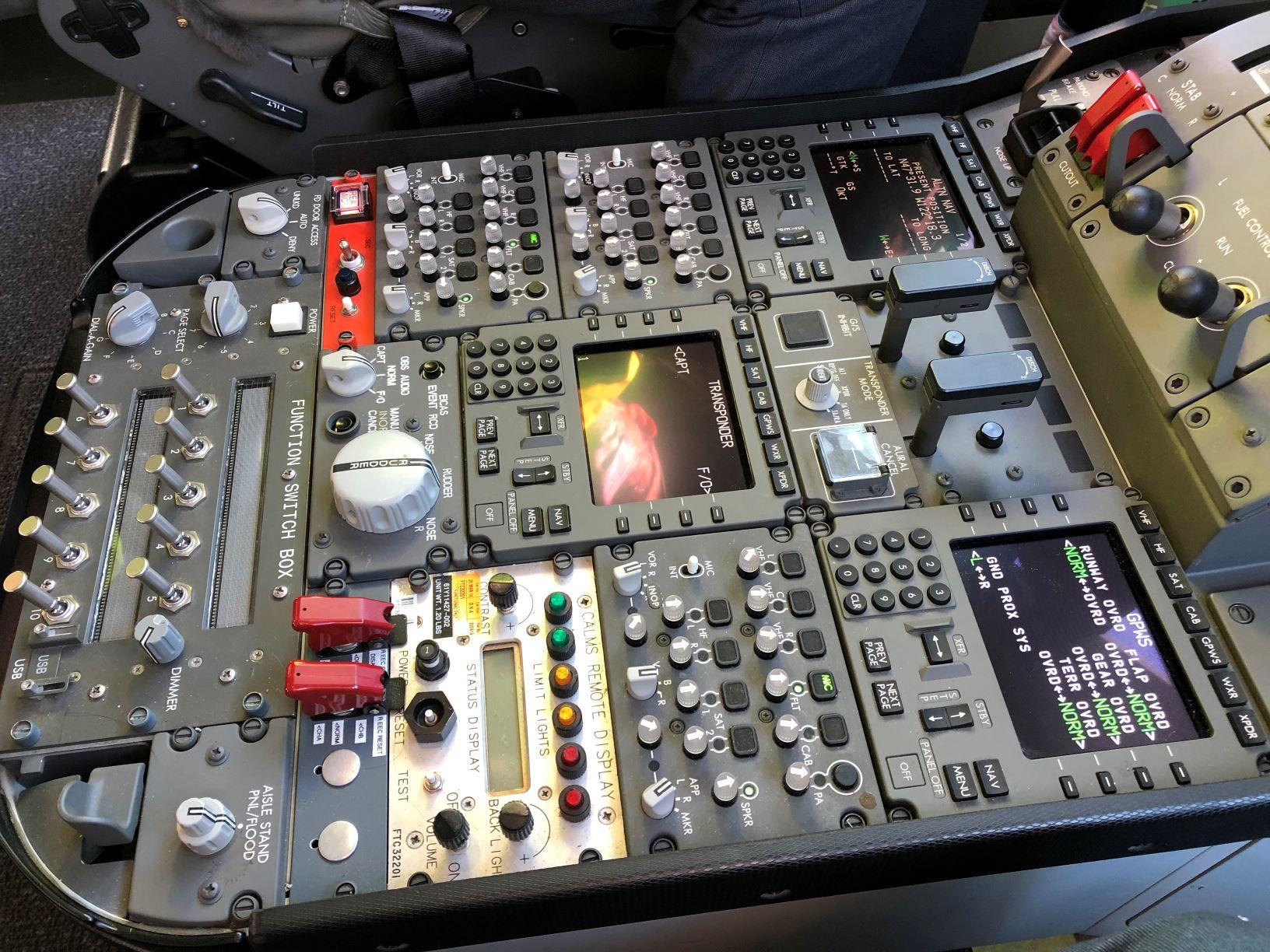 Situated between the pilots the otherwise standard center pedestal contains some modifications for flight test – one of which is the CALMS remote display. Used on numerous Boeing flight test programs this device provides an instant warning of excessive lateral g-loads acting on the tail and alerts flight crews through a series of colored lights ranging from green to red. Photo credit: Guy Norris 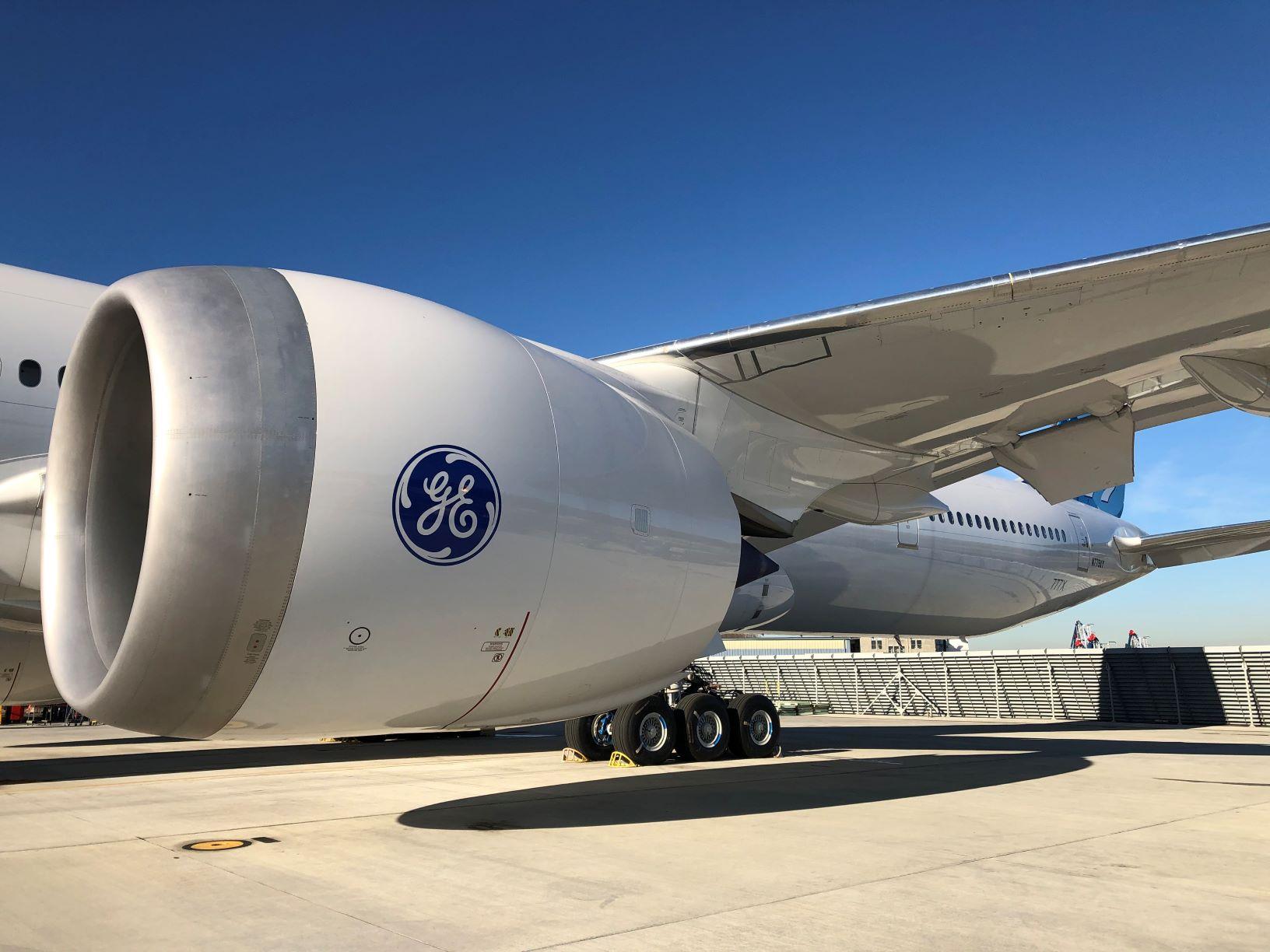 Distinguished by a 134-in. diameter fan comprised of 16 composite blades, the General Electric GE9X has an overall pressure ratio of 60:1, which is the highest for any commercial engine and is designed to be 10% more fuel efficient than its forebear – the GE90-115B. “The engine has been very solid,” says Chaney. Photo credit: Guy Norris

Boeing’s closely scrutinized 777X program has accumulated more than 750 test hours since the first 777-9 made its initial flight in January 2020. The company hopes to receive FAA approval shortly for type inspection authorization which will clear the way for certification tests to begin. Aviation Week received a recent update on the program and given access to one of the 777-9 test aircraft in the run-up to this milestone. See what happened behind the scenes in Guy Norris' exclusive inside look at the aircraft in Seattle.