Unmanned Aircraft: The Good, the Bad, the Ugly 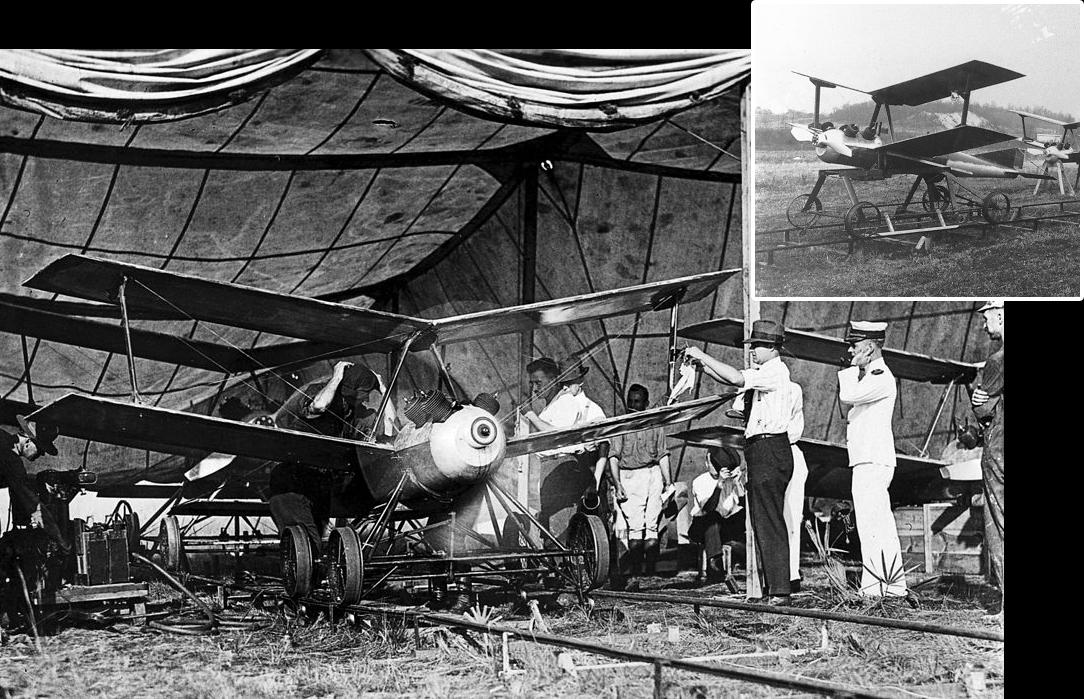 The Kettering Aerial Torpedo, nicknamed the Bug, was an early unmanned aircraft and progenitor of the cruise missile. After flying for a pre-set time, guided by a small gyroscope, the engine was shut off and wings released, the Bug went ballistic and 180 lb. of explosive detonated on impact. First flown in 1918, fewer than 50 had been built before World War I ended, and the Bug was never used in combat. 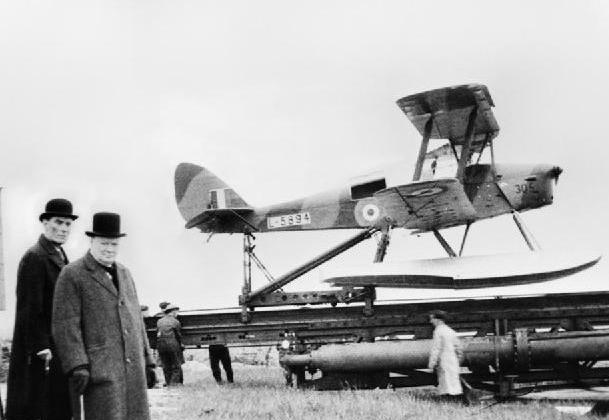 Widely believed to be the origin of the word “drone,” de Havilland’s DH82B Queen Bee was a radio-controlled target aircraft for anti-aircraft gunnery training derived from the Tiger Moth and first flown in 1935. A total of 380 were built for the Royal Air Force and, with floats, for the Royal Navy’s Fleet Air Arm.

From a line of radio-controlled model airplanes, Radioplane’s OQ-3 (Navy designation TDD-2) was the most-produced gunnery target of World War II, with about 9,400 produced. Another 5,200 improved OQ-14/TDD-3s were built. Radioplane went on to develop the MQM-36 Shelduck target before being taken over in 1952 by Northrop, which continued production to the 1980s and a total of around 60,000. 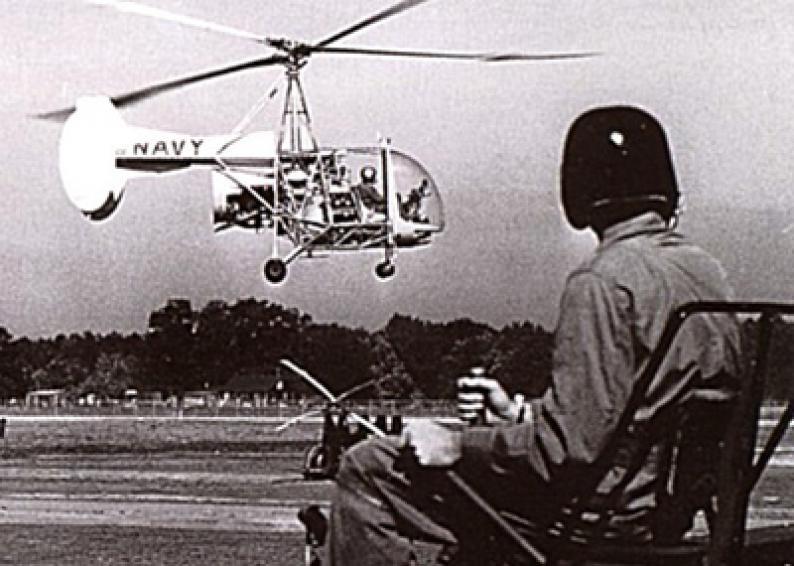 Kaman flew the first turbine-powered helicopter in 1951, followed in 1954 by the first twin-turbine, the HTK-1, and in 1957 established a new landmark by flying the first remotely controlled helicopter, a modified HTK-1. In the late 2000s, Kaman returned to the idea, teaming with Lockheed Martin to develop the Unmanned K-Max external-lift helicopter. 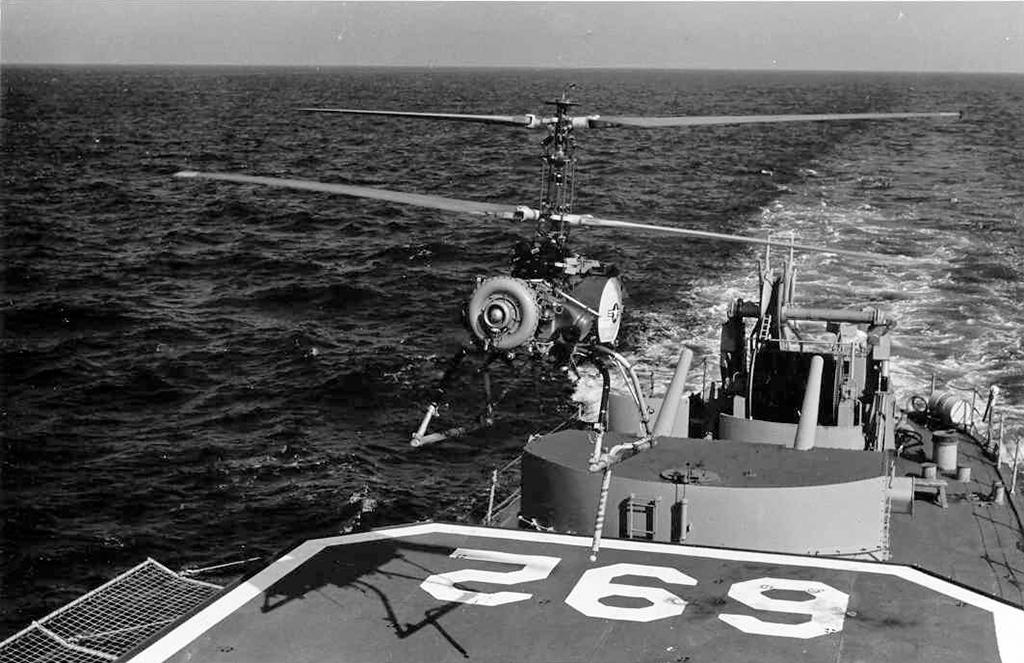 The QH-50 Drone Anti-Submarine Helicopter was developed by Gyrodyne for the U.S. Navy, to carry nuclear depth charges and homing torpedos to longer range from small flight decks on older warships. The coaxial-rotor unmanned helicopter first flew in 1959. The program was canceled in 1970, but ARPA (now Darpa) fitted the QH-50D with sensors and weapons for unmanned gunship trials in Vietnam. 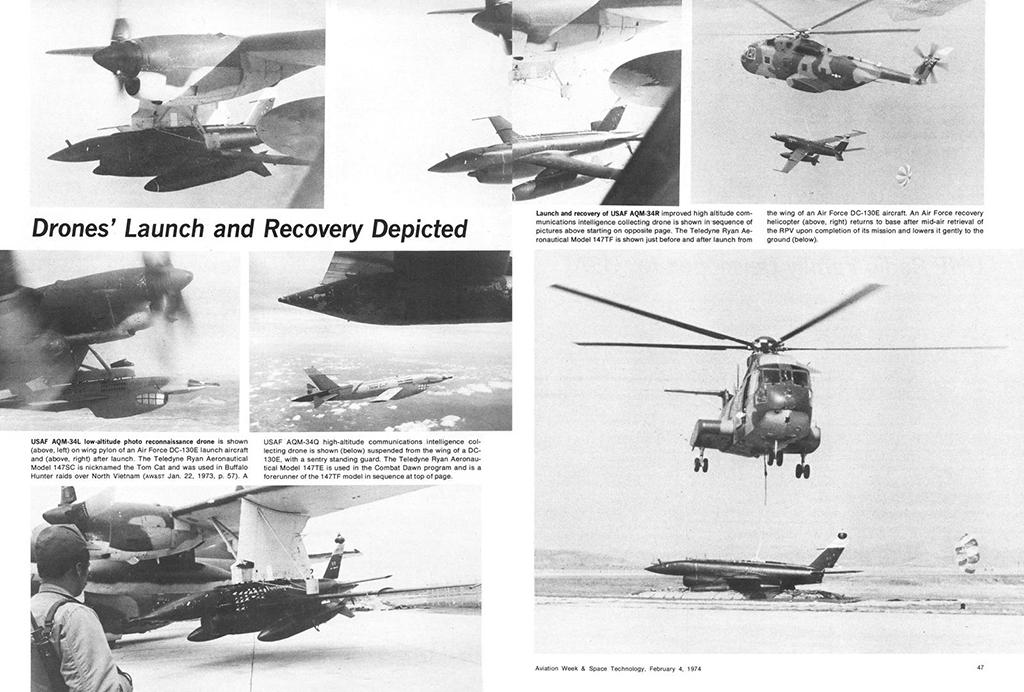 The BQM-34 Firebee was a successful jet-powered target drone produced by Ryan Aeronautical and developed into the Model 147A Fire Fly and 147B Lightning Bug long-range reconnaissance UAVs. The Fire Fly, first flew in 1962, and the improved Lightning Bug became operational over China and North Vietnam in 1964, launched and controlled from Lockheed DC-130 drone control aircraft. Multiple versions of the Model 147 were produced and U.S. operational flights continued until 1975. 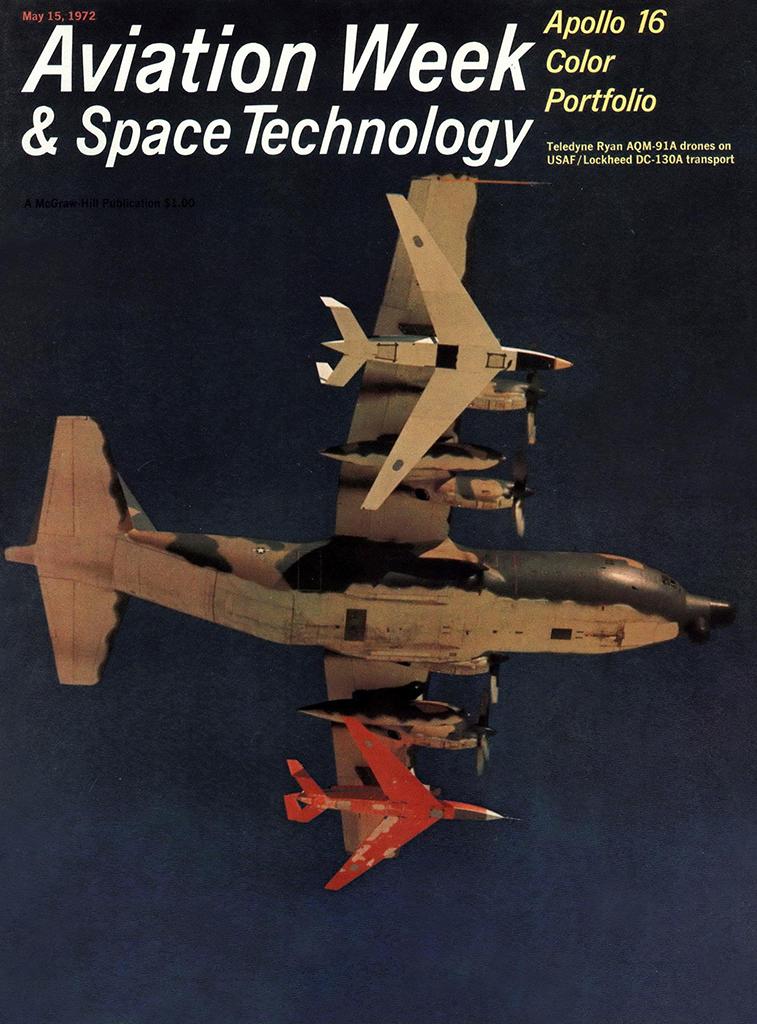 The Ryan Model 154 Firefly was a secret long-range reconnaissance UAV, developed for the U.S. Air Force under the Compass Arrow program to conduct flights deep into China. Air launched from a DC-130E to fly at 78,000 ft. for 4.5 hr., the UAV was designed to reduce radar and infrared signatures. First flown in 1968, the AQM-91A was superseded by the KH-11 spy satellite and never used operationally. 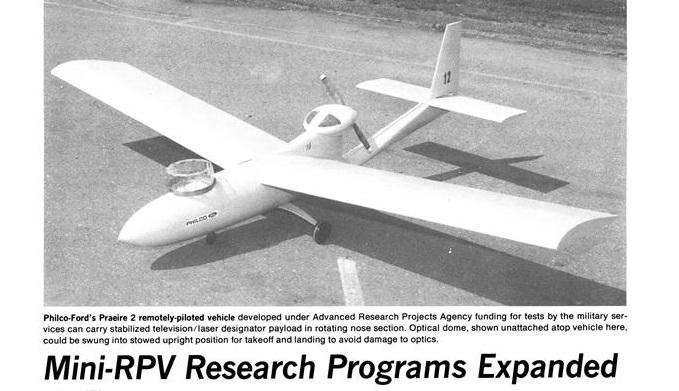 After experimenting with remotely piloted vehicles in Vietnam, ARPA in 1971 began the Mini-RPV program to develop small, low-cost unmanned aircraft for reconnaissance, target acquisition and laser designation. Weighing 75 lb. and powered by a modified lawn-mower engine, the Praerie I first flew in 1973. This led to the U.S. Army’s troubled Aquila RPV program, which was canceled in 1987. 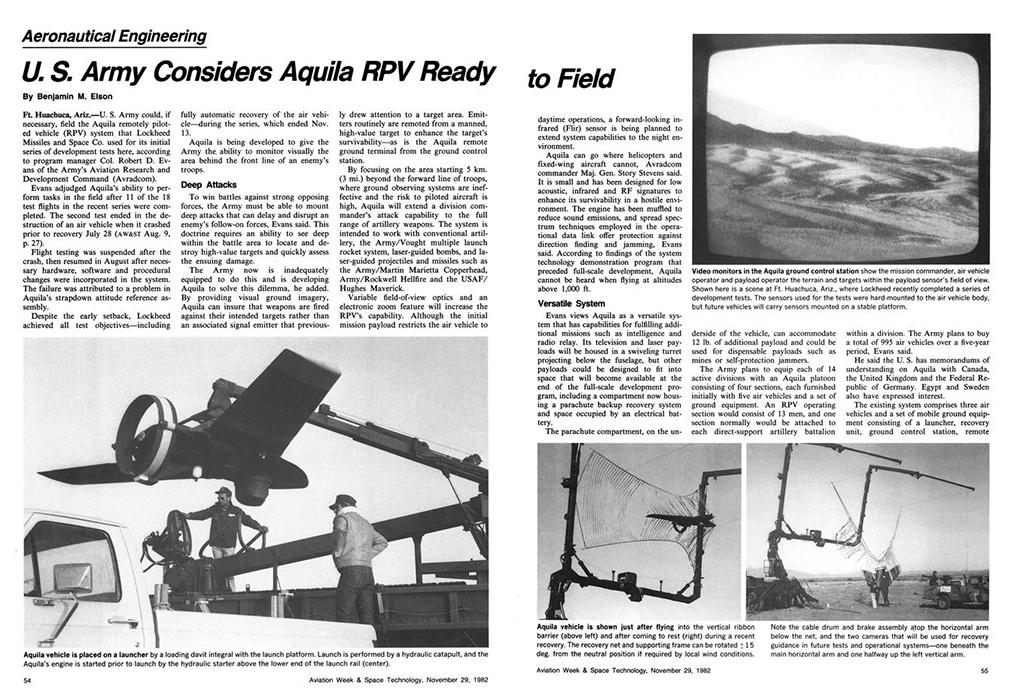 The first U.S. attempt at a battlefield UAV, Lockheed’s Aquila was a 265-lb. flying wing with a ducted pusher propeller television camera and laser designator, launched from a truck-mounted catapult and recovered by flying into a net deployed by another truck. Technical problems and cost growth led to cancellation in 1987 after $1 billion was spent. The successor Alliant RQ-6 Outrider was canceled in 1999, and it was not until the AAI (now Textron) RQ-7 Shadow entered service in 2002 that the Army received its tactical UAV. 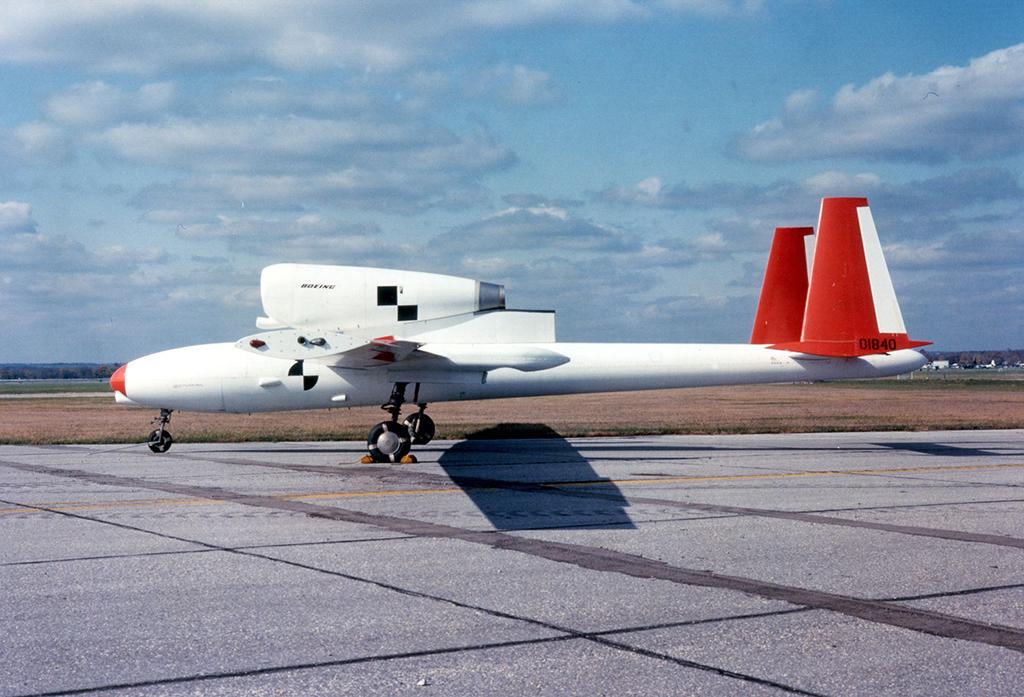 Compass Cope was a U.S. Air Force program to develop an   unmanned reconnaissance aircraft that could take off from a runway and operate at high altitude for up to 24 hr. Two designs were produced: the Boeing YQM-94A Compass Cope B flown (and crashed) in 1973 and Ryan YQM-98A Compass Cope R flown in 1974. Boeing won the competition, but the program was canceled in 1977. 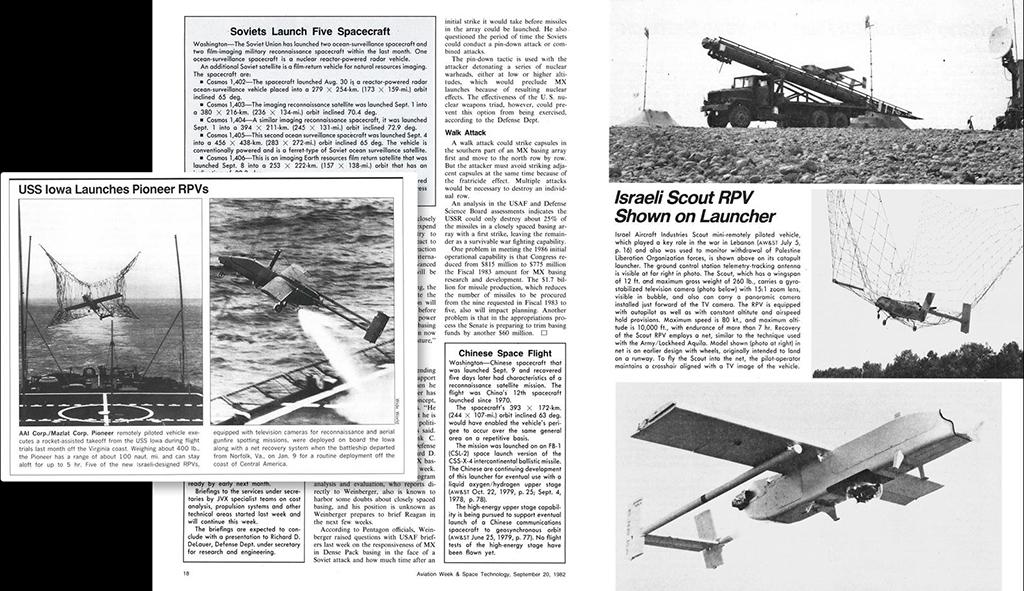 While the U.S. lost interest in battlefield UAVs after its problems with the Lockheed Aquila, Israel embraced the idea, developing and deploying operationally both the IAI Scout and Tadiran Mastiff in the 1970s. These systems launched a line of IAI tactical UAVs—the U.S. Navy’s RQ-2 Pioneer, U.S. Army’s RQ-5 Hunter and widely used Searcher—and led to larger systems, including the Heron and Heron TP. 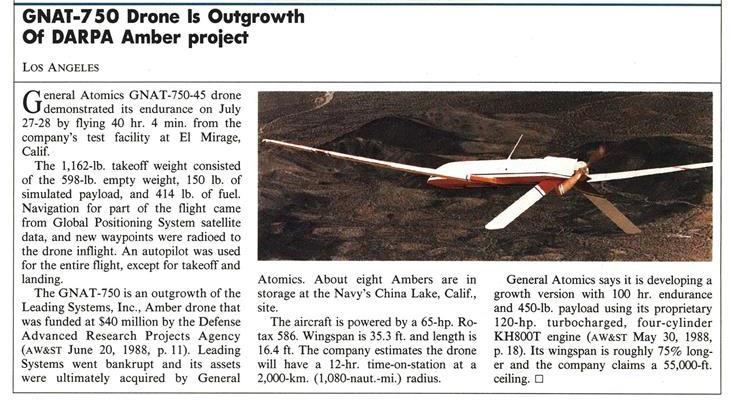 Under the Teal Rain program, Darpa developed the first medium-size endurance UAV. Designed by Israeli engineer Abe Karem, the Leading Systems Amber first flew in November 1986 and in June 1988 set an endurance record of 38 hr. The Amber did not transition to the military, and Leading Systems was acquired by General Atomics, which ultimately evolved the vehicle into the RQ-1 Predator UAV.

The Condor was a technology demonstrator for an all-composite, high-altitude, long-endurance unmanned aircraft. Two aircraft were built and flown for a total of 141 hr. in 1988-89, exceeding an altitude of 67,000 ft. and an endurance of 50 hr. With a wing span of 200 ft., the aircraft was powered by two turbocharged Continental piston engines and designed to stay aloft for more than 80 hr. 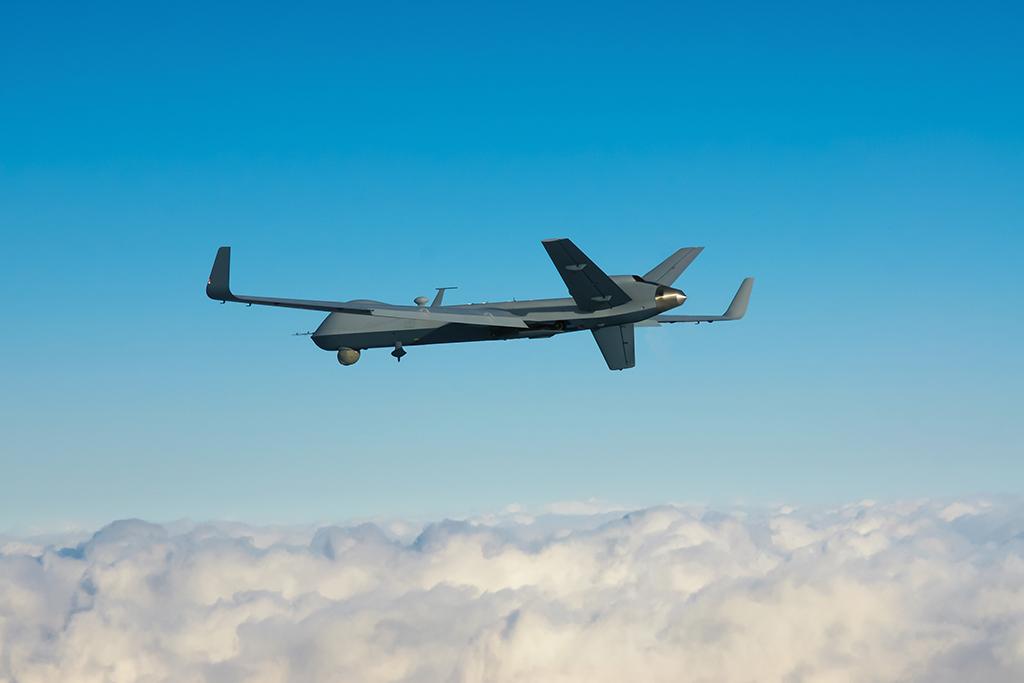 The RQ-1 Predator was developed from the Gnat long-endurance UAV produced for the Central Intelligence Agency. First flown in 1994, the Predator A began operations over the Balkans in 1995. The program was assigned to the Air Force in 1996, the last redesignated MQ-1 being delivered to the service in 2011. The larger Predator B first flew in 2001, entering service with the Air Force in 2007 as the MQ-9 Reaper. France, Italy, the Netherlands, Spain and the U.K. have purchased Predator Bs. 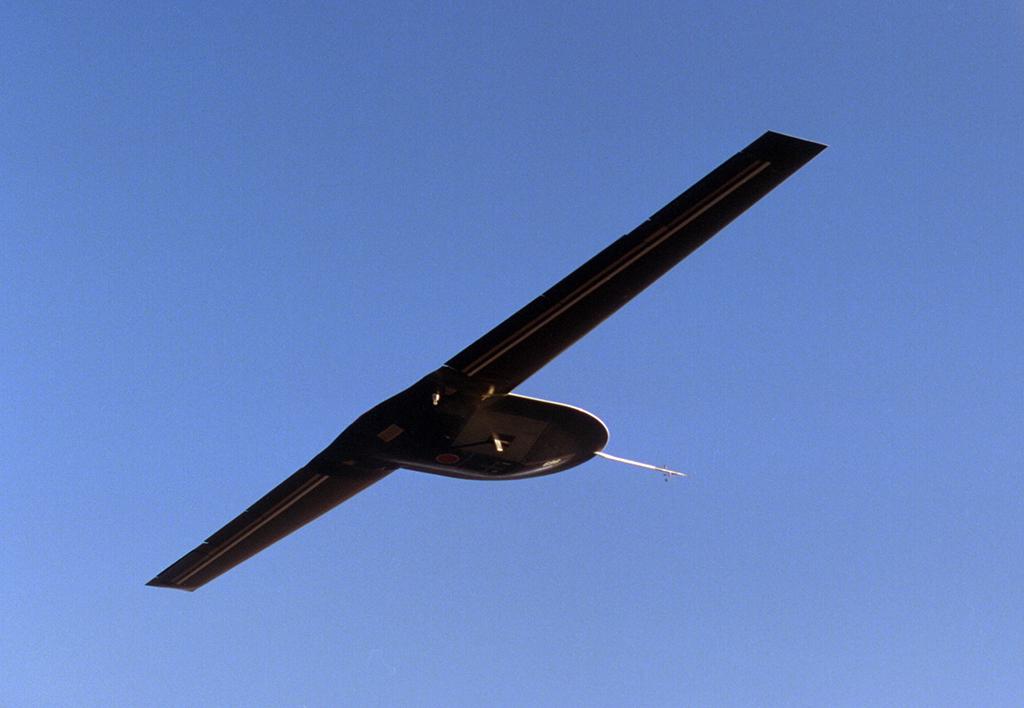 Developed by Darpa concurrently with the nonstealthy Teledyne Ryan (now Northrop Grumman) RQ-4 Global Hawk, the Lockheed/Boeing RQ-3 DarkStar was designed as a low-observable, long-endurance UAV able to operate in defended airspace. The flying-wing aircraft made its first flight in 1996 but crashed due to instability on its second flight. The DarkStar flew again in 1998 but was canceled. 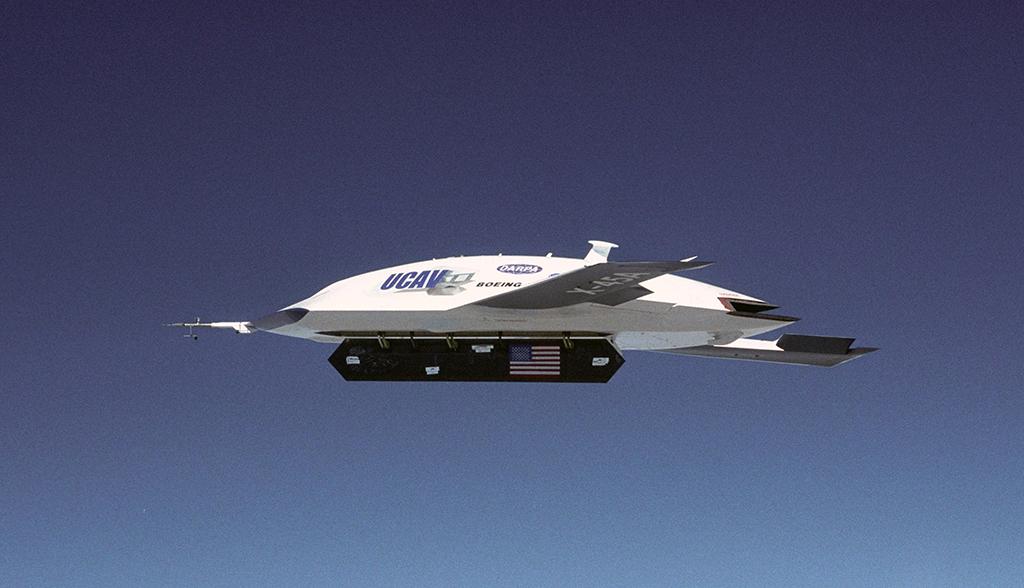 Boeing built two X-45A unmanned combat air vehicle (UCAV) demonstrators for Darpa and the U.S. Air Force. First flown in 2002, the pair in 2005 conducted an autonomous defense-suppression mission culminating in weapon drops. Darpa’s follow-on Air Force/Navy J-UCAS program was canceled, but Boeing completed one of the planned X-45Cs and flew it in 2011 as the Phantom Ray. The Navy continued with Northrop Grumman’s rival X-47B, which accomplished milestone aircraft-carrier operations in 2013 and autonomous aerial refueling in 2015. 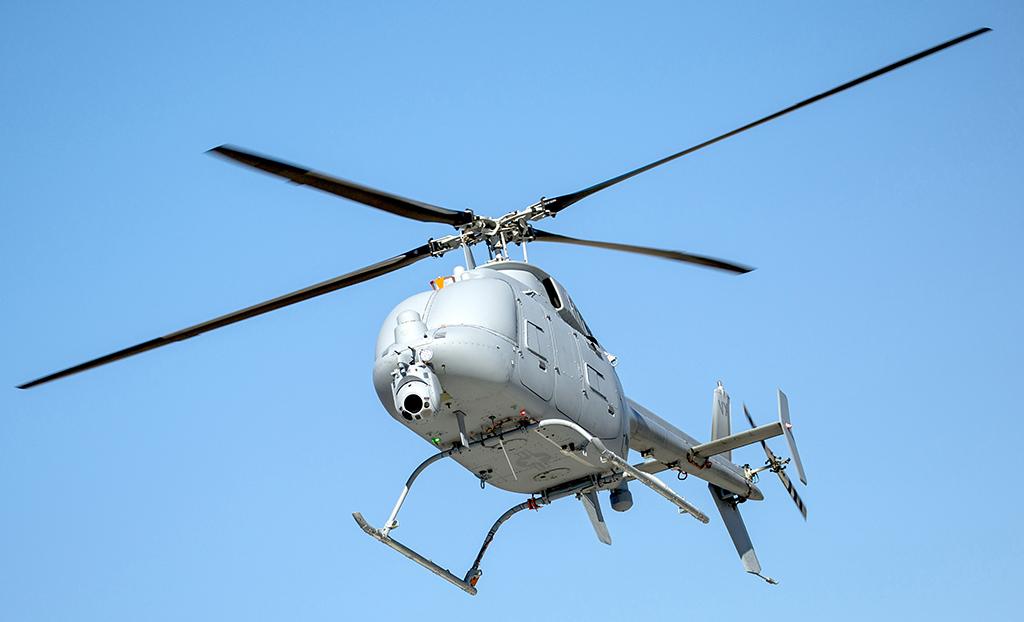 Demonstrating that an unmanned aircraft system (UAS) is a system, and not just an aircraft, the U.S. Navy has changed airframes for its Northrop Grumman MQ-8 Fire Scout shipboard tactical UAV. First flown in 2002 as the RQ-8A, the operational MQ-8B is based on the Schweizer (later Sikorsky) S-333 helicopter. The extended-range MQ-8C flown in 2013 and now in operational testing is based on the larger Bell 407 helicopter, but the ground control, launch and recovery system is unchanged.

Unmanned aircraft have been part of the aviation scene for as long as Aviation Week has—longer, if attacks by pilotless bomb-carrying balloons in the late 1800s are included. But the history of UAVs is a cycle of enthusiasm and indifference, success and failure, a journey from urgent requirement to frontline action to neglected storage. But that cycle has been broken, and unmanned aircraft are here to stay, in military and civil aviation. We take a look at a few of the many UAVs flown over the past 100 years.

Unmanned Aircraft’s Future, Like Its History, Will Be Technology-Driven

The Anatomy Of The UAS

The Strange History Of The Word ‘Drone’