A Closer Look at Stealth, Part 5: Nozzles and Exhausts 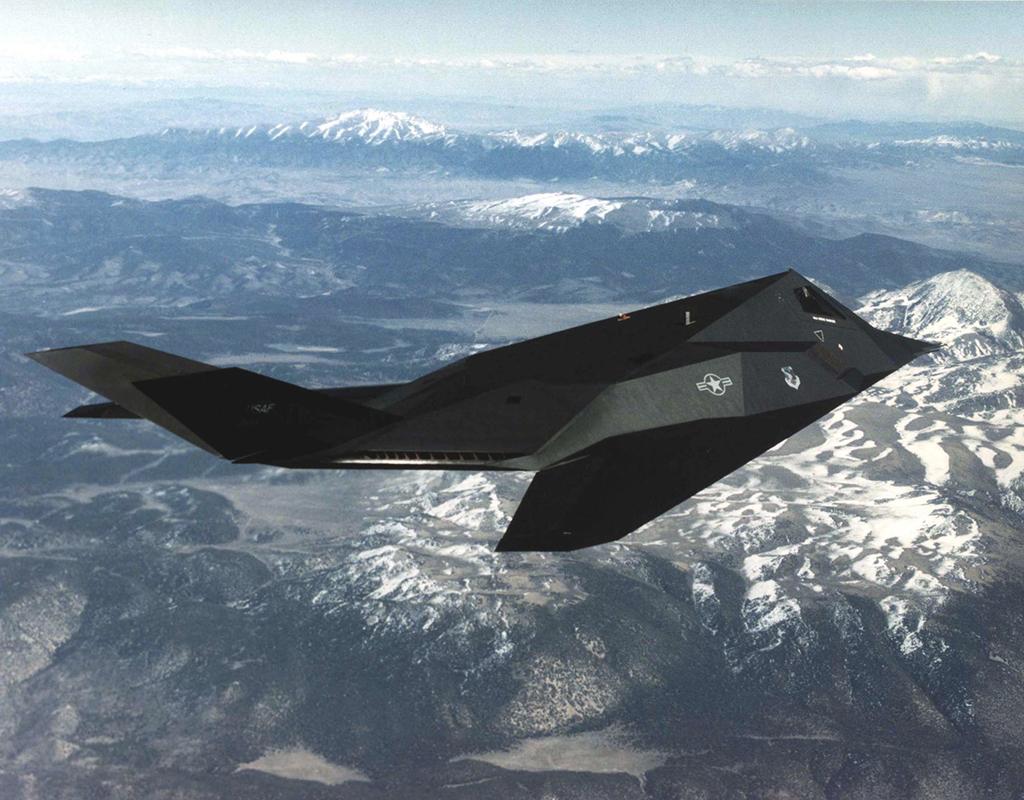 The F-117A Nighthawk was the first U.S. aircraft to use low-observability as its primary means of survivability. The rear of the aircraft sloped from an apex above the cockpit into a broad, flat feature dubbed the “platypus.” The engine exhaust flattened to thin slots 4-6-in. deep and 5-ft. wide, divided horizontally into about a dozen channels. The lower fuselage terminated in a lip extending 8 in. past the exhaust at a slightly upward angle. This was covered in “heat-reflecting” tiles that were cooled by bypass air from the engines. The platypus shielded the hot metal parts while the flattened plume reduced IR intensity from the side and accelerated mixing with ambient air. The extended lip masked the exhaust slot and first 8 in. of plume from below, while the low-emissivity tiles limited IR absorption and emission. 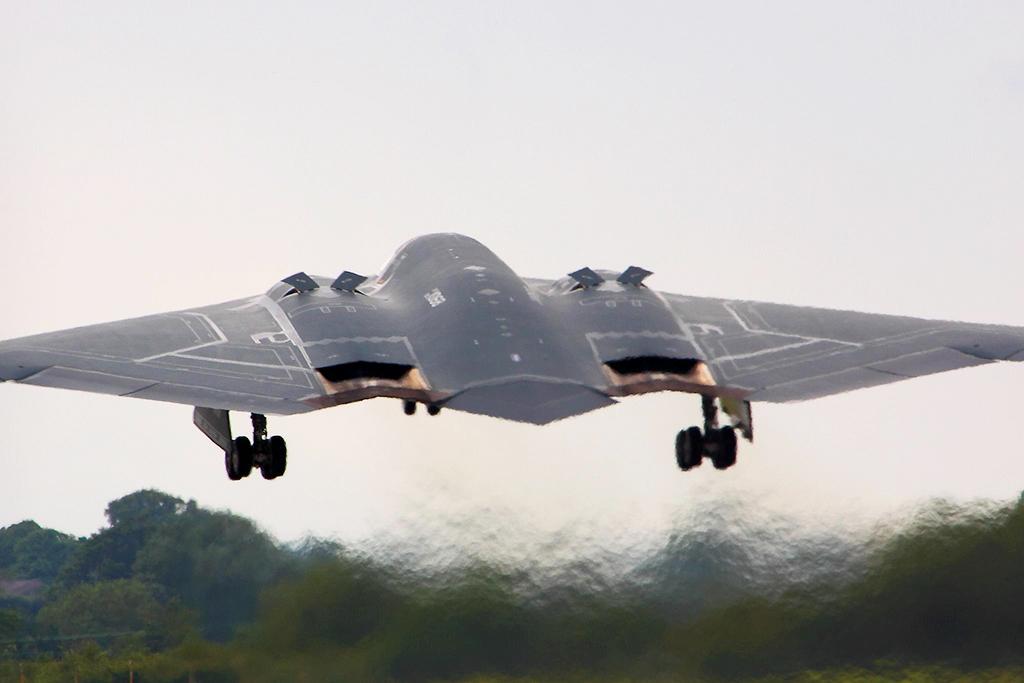 Buried deep within its flying-wing airframe, the B-2’s engines are prevented from heating the outer surface. The exhaust is cooled by bypass air, including from secondary air intakes, and flattened prior to exiting over the “aft deck”—trenches built of titanium and covered in low-emissivity ceramic tiles. Likely containing magnetic radar-absorbent material (RAM), these extend several feet behind the nozzles, blocking the plume’s core from below and the side. Large chevrons at the end of the engine fairings and aft deck also introduce shed vortices to accelerate mixing with ambient air. 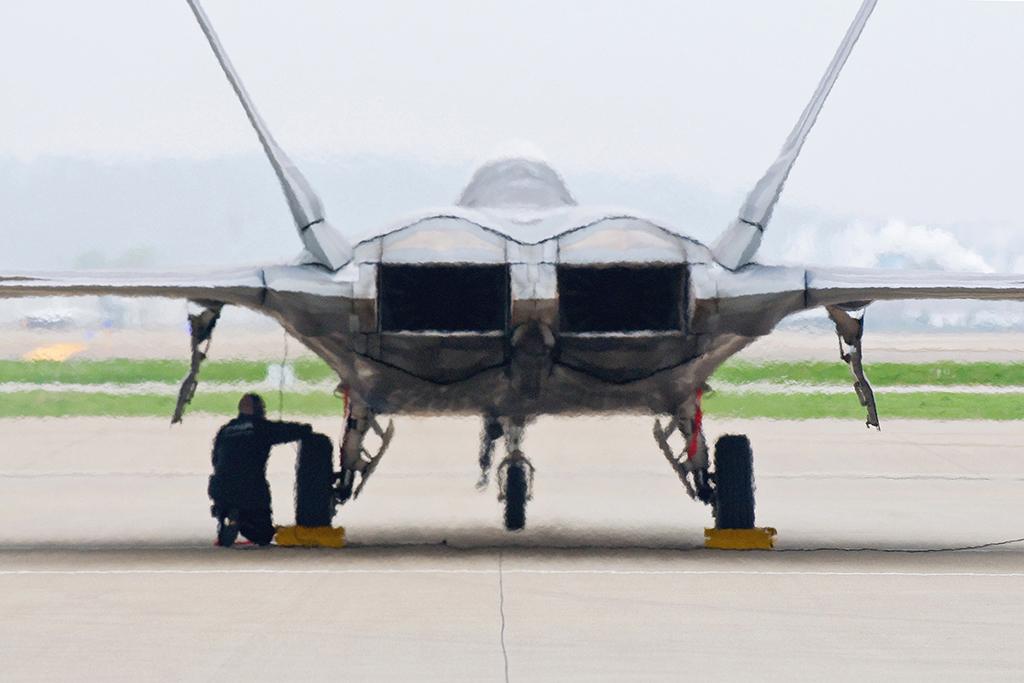 Pratt & Whitney incorporated a number of IR signature-suppression techniques into the F119 engines that power Lockheed Martin’s F-22 Raptor. Aft of the low-pressure turbine are thick, curved vanes that, when looking up the tailpipe, block any direct view of the hot, rotating turbine components. Fuel injectors are integrated into these vanes, replacing the conventional afterburner spray bars and flame holders. The vanes mask the turbine and contain minute holes that introduce cooler air. The exhaust then passes through the F119’s “non-axisymmetric,” or 2D, thrust-vectoring nozzles, which have upper and lower surfaces ending in wedges with blended central edges. These nozzles further mask the engine hot parts while flattening the exhaust plume and generating vortices. Minute holes are evident on their inner surfaces, likely providing bypass air for enhanced cooling. 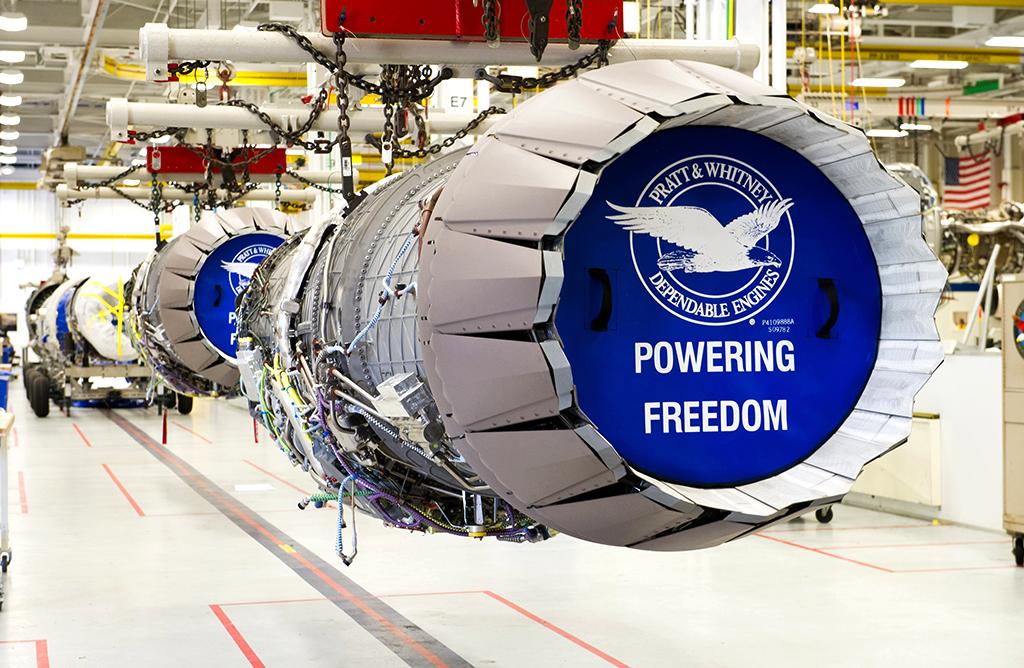 In designing the nozzle of the F135 engine that powers the F-35 Joint Strike Fighter, Pratt & Whitney aimed to rival the low signature of the nozzles on its previous F119, while beating it on maintenance costs. The F135 nozzle comprises two overlapping sets of 15 flaps, offset so outer flaps are centered on the gaps between the inner flaps. The inner flaps are thin, have metallic exteriors and straight sides and terminate in inverted “V”s. The sides create rectangular gaps between them with the nozzle fully diverged. The outer flaps, which Pratt calls “tail feathers,” are thicker and covered in tiles with blended facets. They terminate in chevrons that overlap the ends of the inner flaps to create a sawtooth edge. Toward the fuselage, the tiles end in four chevrons and are covered by additional tiles (not attached to the engines in this photo) that terminate fore and aft in chevrons and interlock with adjacent tiles in sawtooth-fashion.

The F135 nozzle likely suppresses IR signature using multiple methods. The trailing-edge chevrons create shed vortices, shortening the plume, while their steeper axial angle likely directs cooler ambient air into the exhaust flowpath. The inner surfaces of both sets of flaps are white and covered in minute holes similar to those on the F119, which might supply cooling air. The space between the tail feathers and the trailing chevrons may also contain ejectors to provide even more cooling air. The tiles and inner flap surfaces are likely composed of low-emissivity, RAM composites.

Improvements in infrared (IR) detection technology have made it possible for IR search-and-track systems and IR-guided missiles to acquire aircraft at increasingly long distances. The technology poses a growing threat to aircraft that only suppress their radar signatures. Therefore, in State of Stealth, Part 5, Aviation Week takes a deep dive into the IR side of low-observability. Among the most important factors in limiting an aircraft’s IR detectability is addressing the large signatures created by the engines’ hot part, nozzles and exhaust plumes. In this gallery, we examine the approaches to reducing engine and plume IR signatures that have been taken on the F-117, B-2, F-22 and F-35.