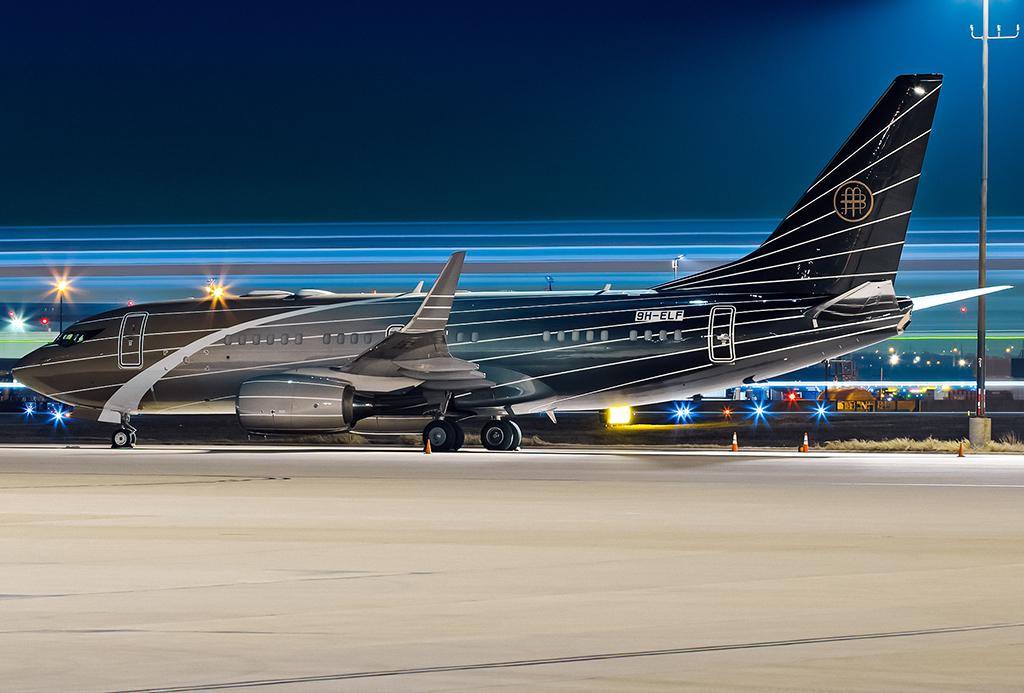 An AirX Charter Boeing 737-700BBJ rests on the corporate aviation ramp with an American Airlines Airbus A320 under tow behind it at Dallas/Fort Worth International Airport. The streaks of light are from the tail of the American aircraft, made possible by the 20-sec. exposure. 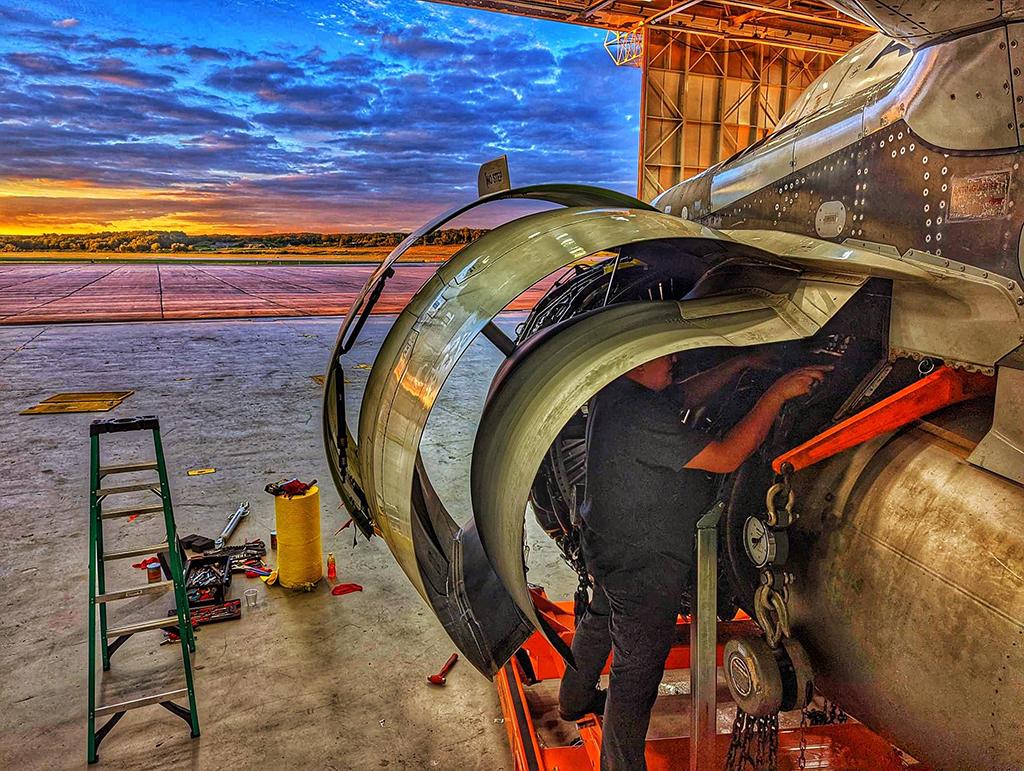 A Stratton Aviation technician removes an engine from an Airbus A318, missing the chance to enjoy a perfect sunset at Griffis International Airport in Rome, New York. 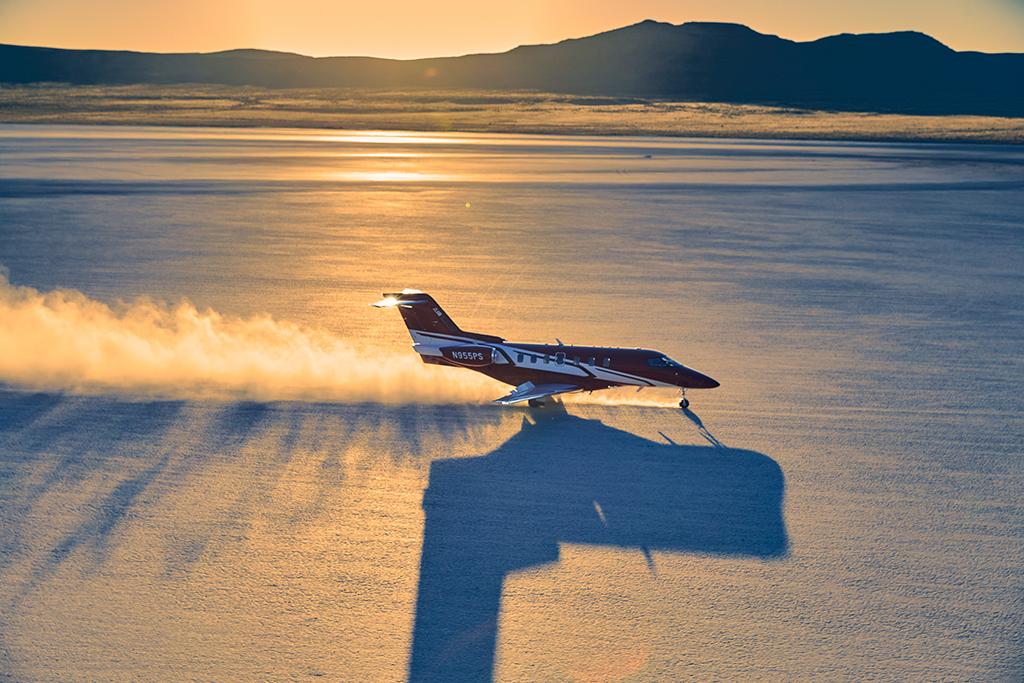 The Pilatus PC-24 is the only aircraft combining the versatility of a turboprop with the cabin size of a medium-light jet and the performance of a light jet. It doesn’t fit into any of the existing business jet categories. The PC-24 has outstanding short-field performance—even on unpaved runways. 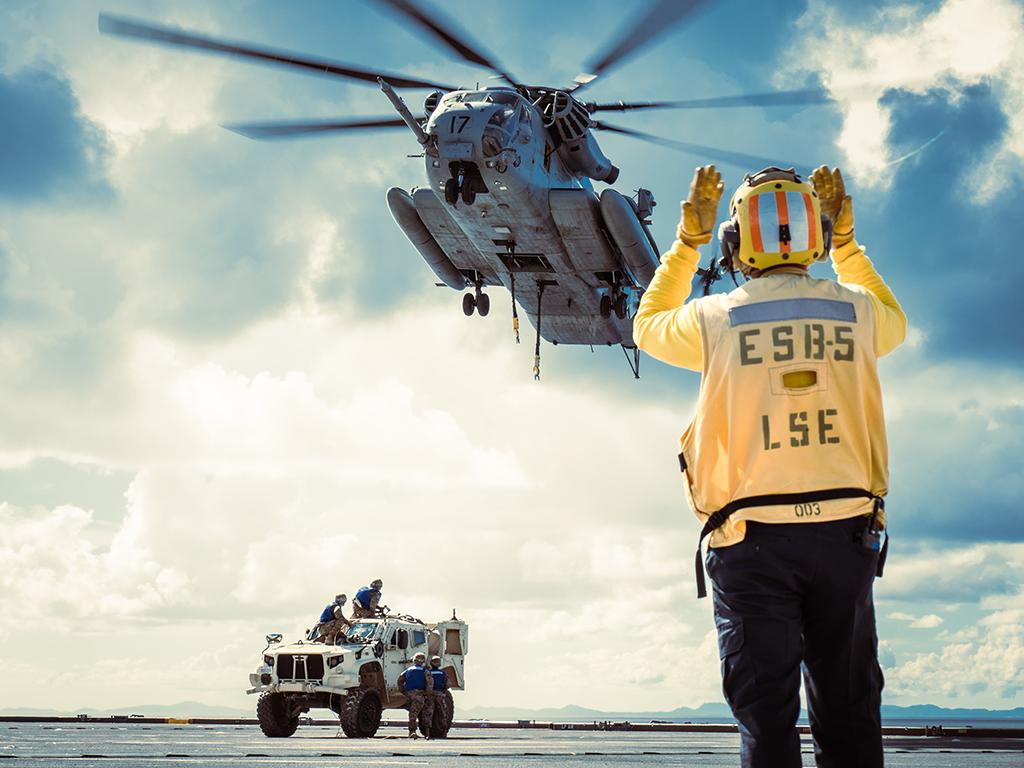 A U.S. Marine Corps Sikorsky MH-53E delivers a Joint Light Tactical Vehicle as part of an exercise aboard the expeditionary sea base ship USS Miguel Keith. 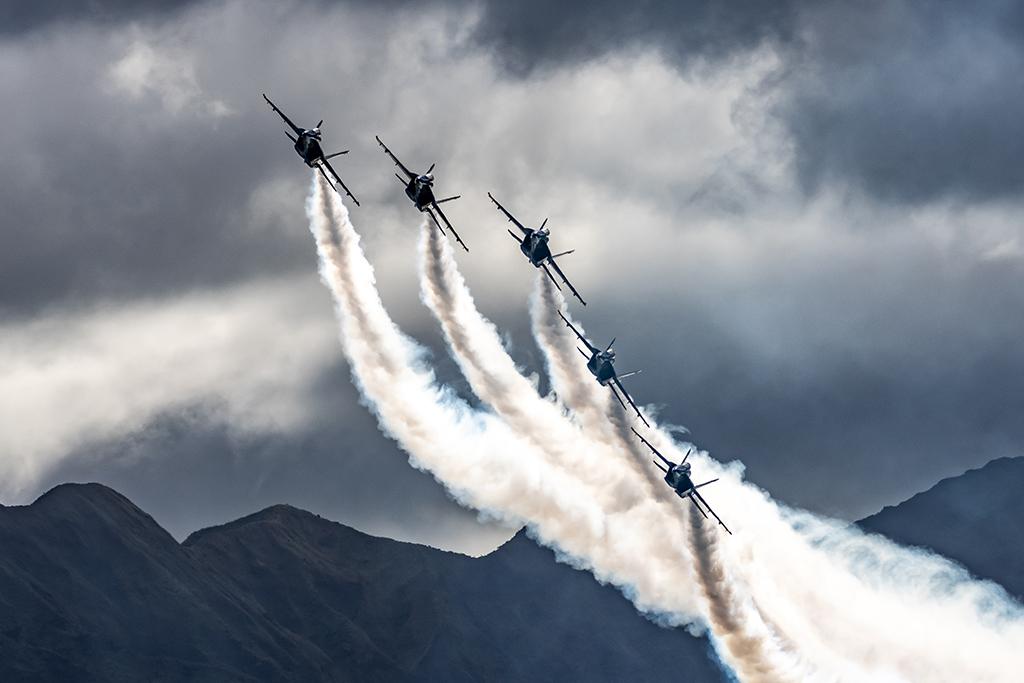 The Blue Angels performing their Delta Pass (minus the lead solo) under the changing cloud cover as they approach show central during the 2022 Kaneohe Bay Air Show at Marine Corps Base Hawaii in Oahu. 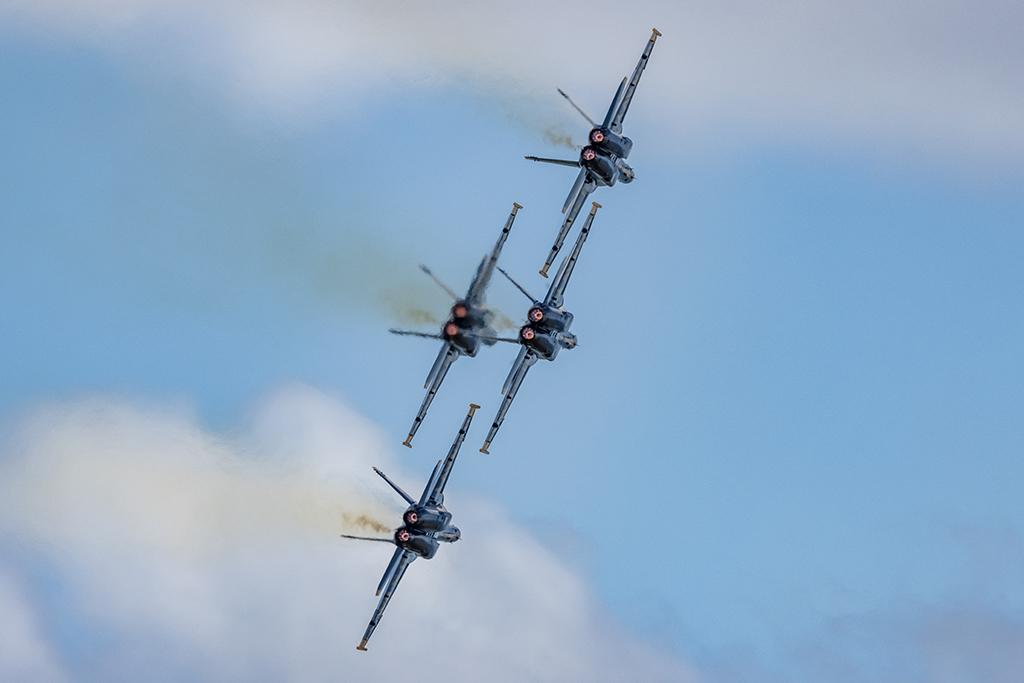 The Blue Angel Diamond formation performs an elegant left-hand banking turn (with afterburners) past the crowd during the 2022 Kaneohe Bay Air Show at Marine Corps Base Hawaii. 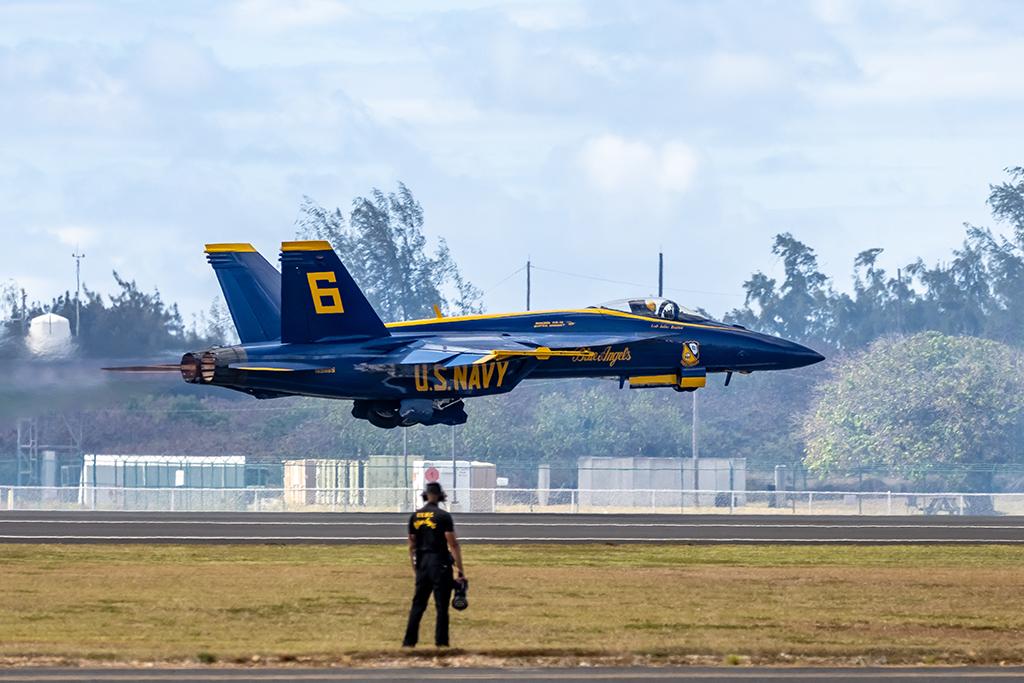 Blue Angel No. 6, flying opposing solo, stays low and fast during a maximum-performance takeoff demonstration for the crowd at the 2022 Marine Corps Base Hawaii Kaneohe Bay Air Show. 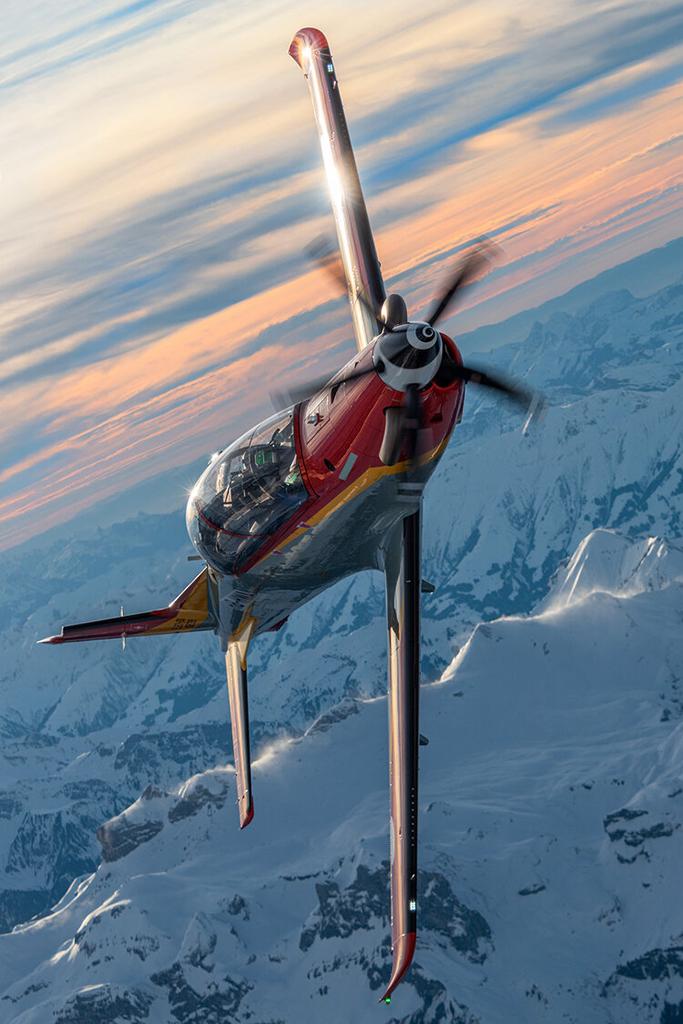 To train the next generation of military pilots, Pilatus developed the next-generation trainer, the PC-21, specifically with student pilots in mind. On the PC-21, pilots destined to fly fighter aircraft do not need to transition to jets until much later than those flying conventional trainer aircraft, reducing cost and training time. 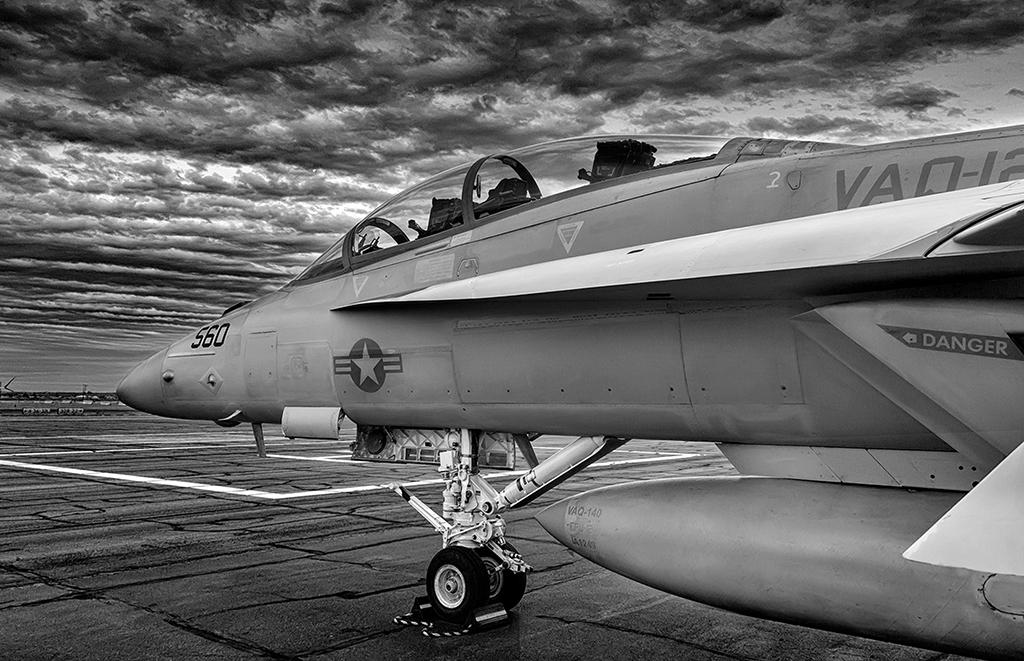 A Boeing EA-18G Growler on the ramp at Grant County International Airport. The aircraft was one of two performing at the Moses Lake Airshow in Washington. 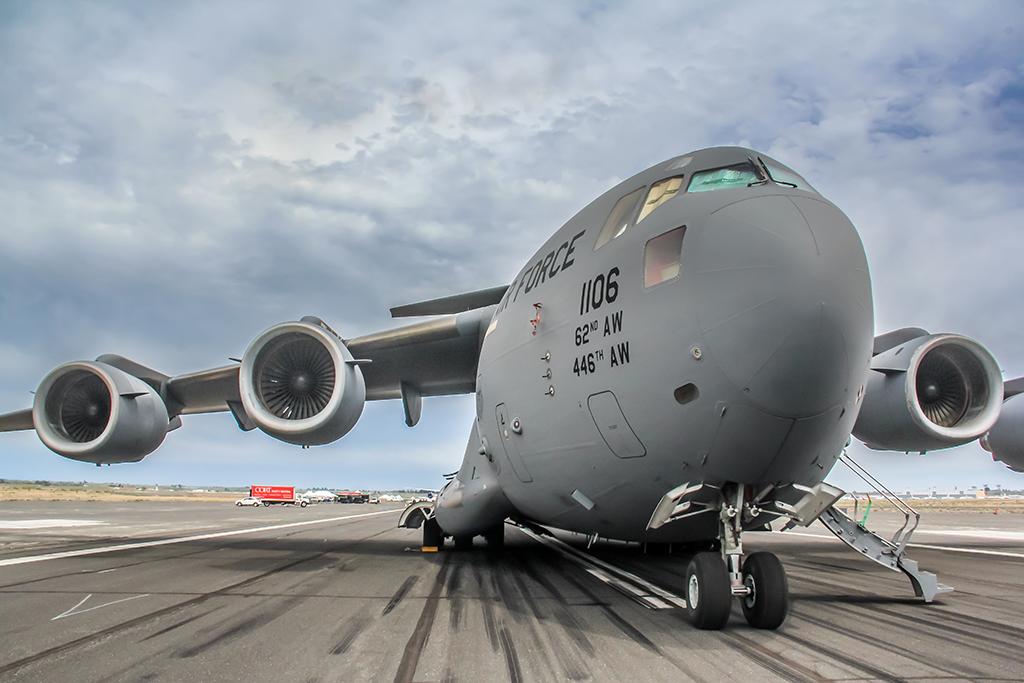 This Boeing McDonnell Douglas C-17 Globemaster III strategic airlifter was on display and performed at the Moses Lake Airshow at Grant County International Airport. The aircraft is assigned to the U.S. 18th Air Force of Air Mobility Command, 62nd Air Wing at Joint Base Lewis-McChord, Washington. 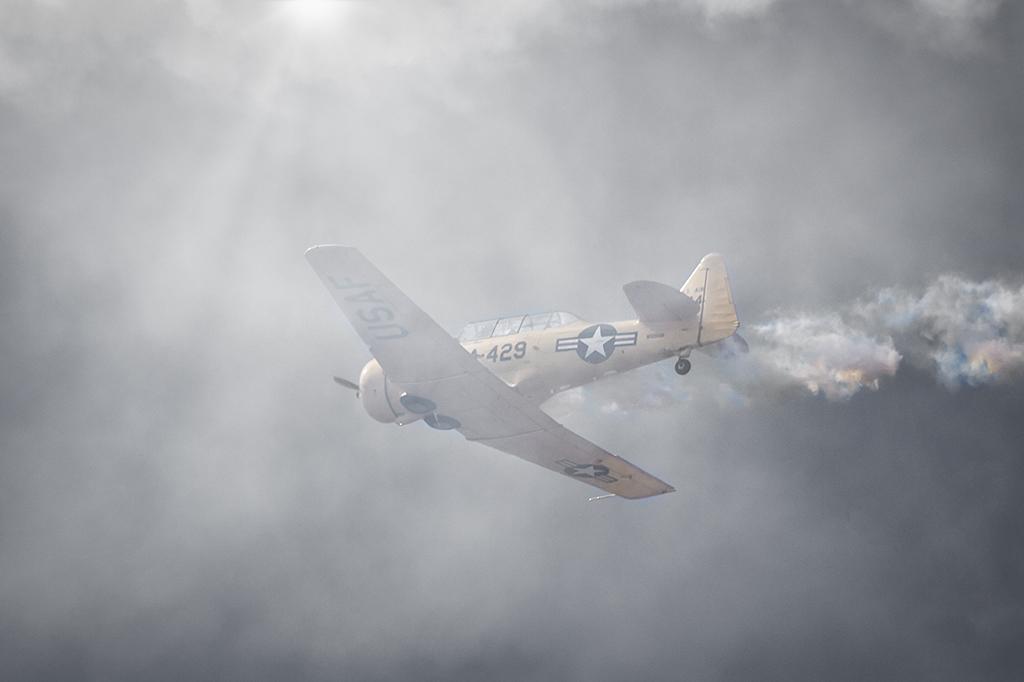 This photo of an old fighter trainer was taken in Bonham, Texas, on an incredibly bright day. The sky overpowered the image, taking out most of the color and creating an interesting effect. 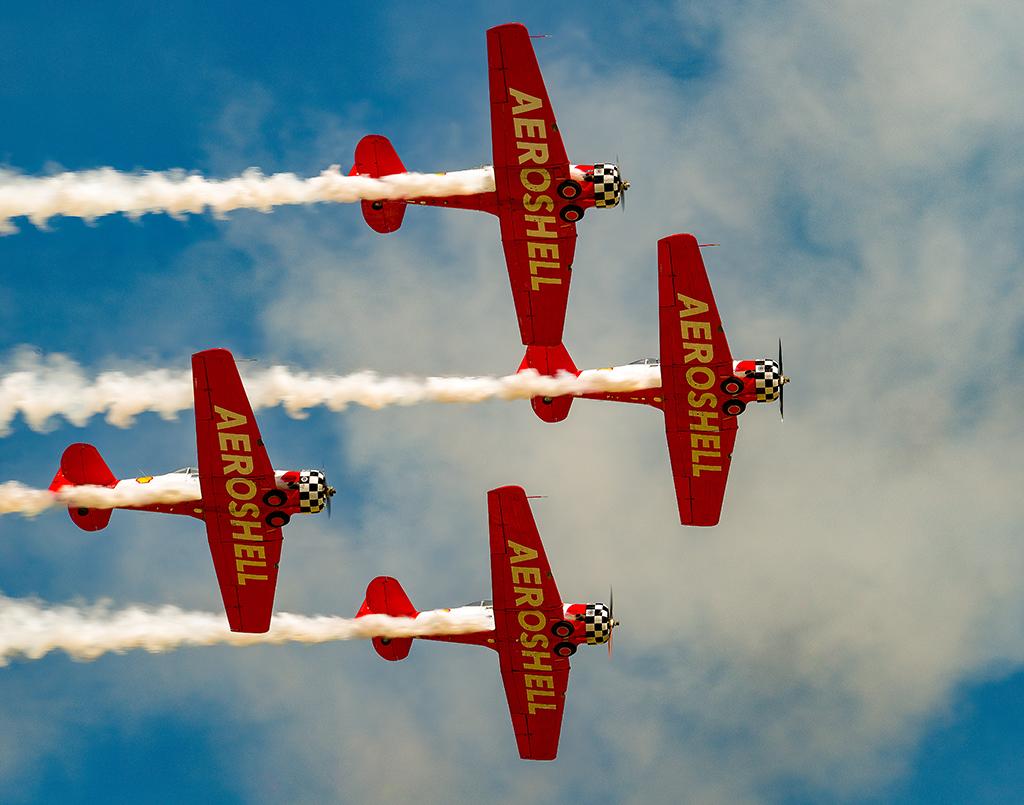 The Aeroshell AT-6 Demo Team performs for the crowd at the Experimental Aircraft Association’s AirVenture 2022 in Oshkosh. 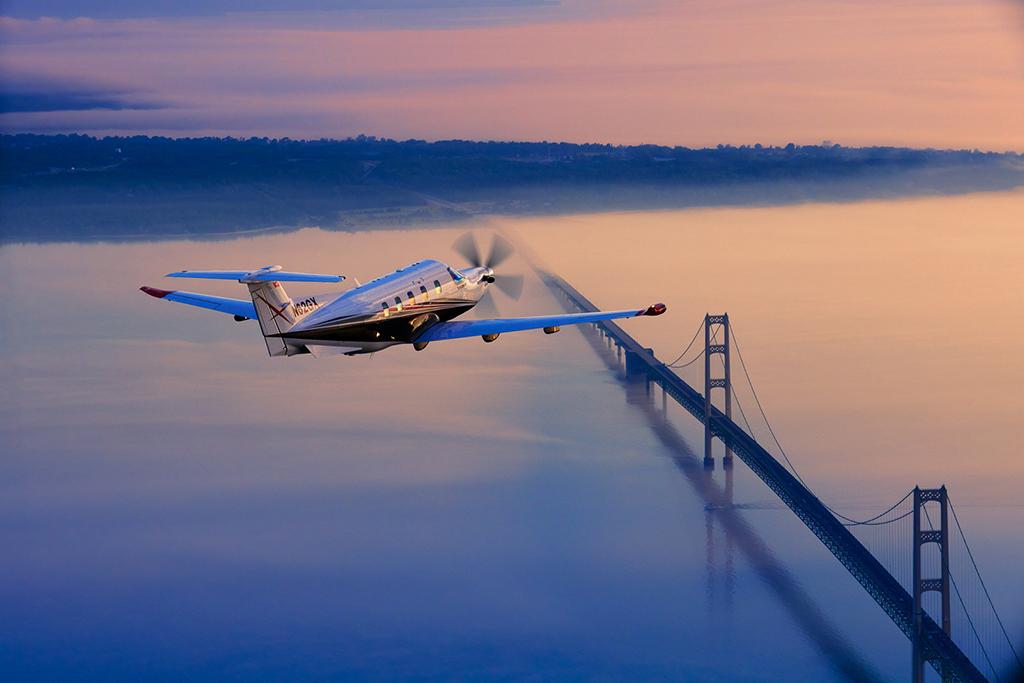 The brand-new PC-12 NGX builds on the 1,700-aircraft foundation of its market-defining predecessor, the PC-12, which has accumulated more than 7 million flight hours. The PC-12 NGX aims to take this legacy to the next level of refinement, efficiency and technological advancement. 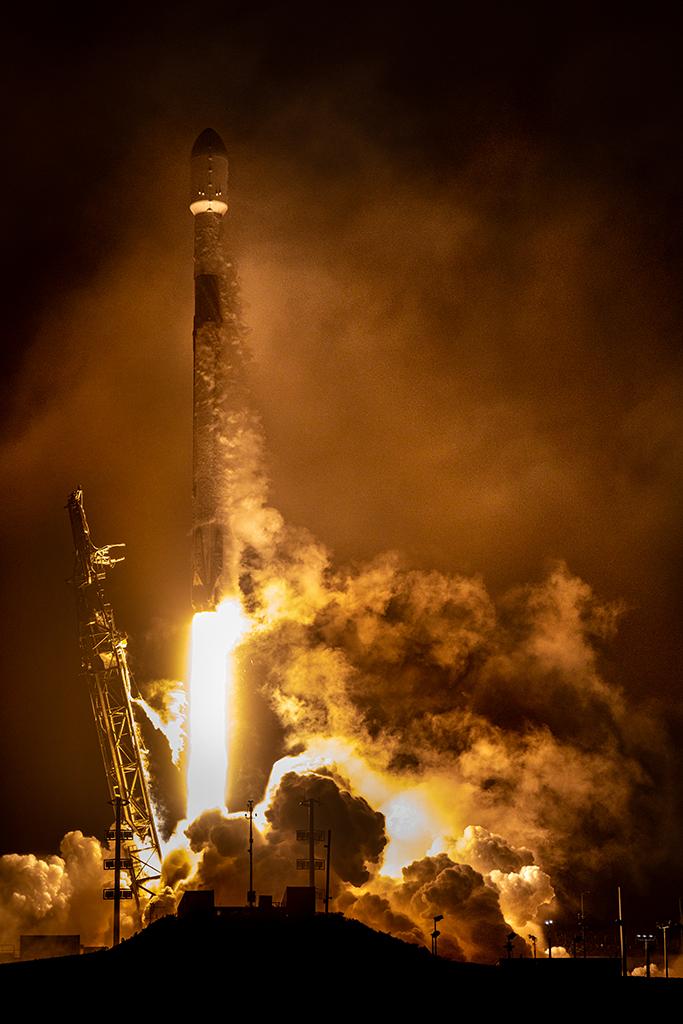 The SpaceX Falcon 9 rocket launched with the Double Asteroid Redirection Test (DART) spacecraft onboard on Nov. 23, 2021, from Space Launch Complex 4E at Vandenberg Space Force Base in California. DART is the world’s first full-scale planetary defense test, demonstrating one method of asteroid deflection technology. The mission was built and is managed by the Johns Hopkins University Applied Physics Laboratory for NASA’s Planetary Defense Coordination Office. 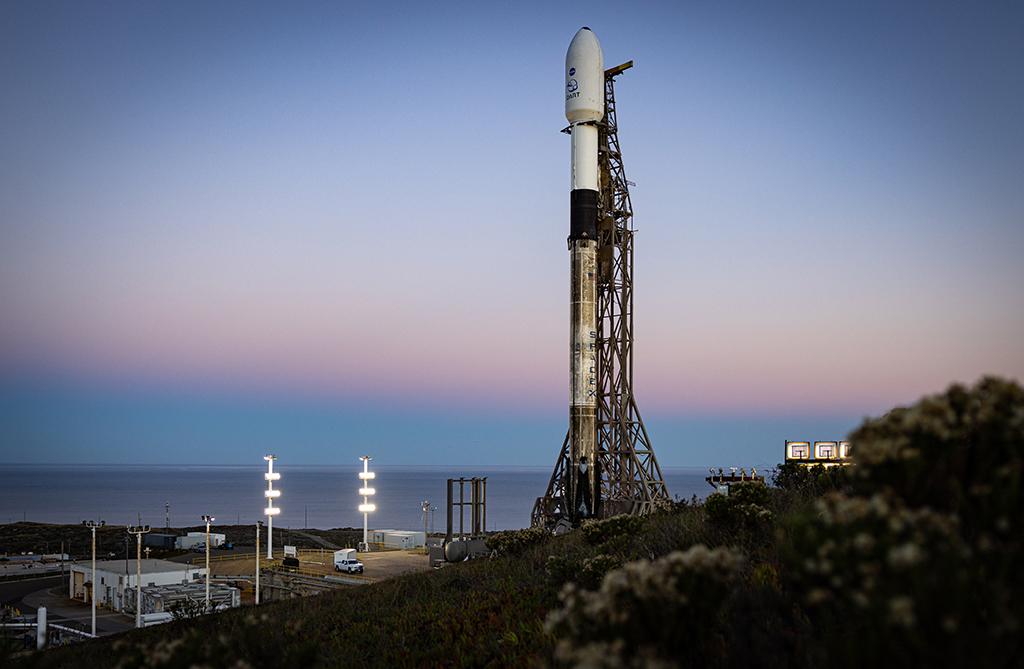 The SpaceX Falcon 9 rocket with the Double Asteroid Redirection Test spacecraft onboard, photographed at sunrise on the day of its launch at Space Launch Complex 4E, Vandenberg Space Force Base in California. 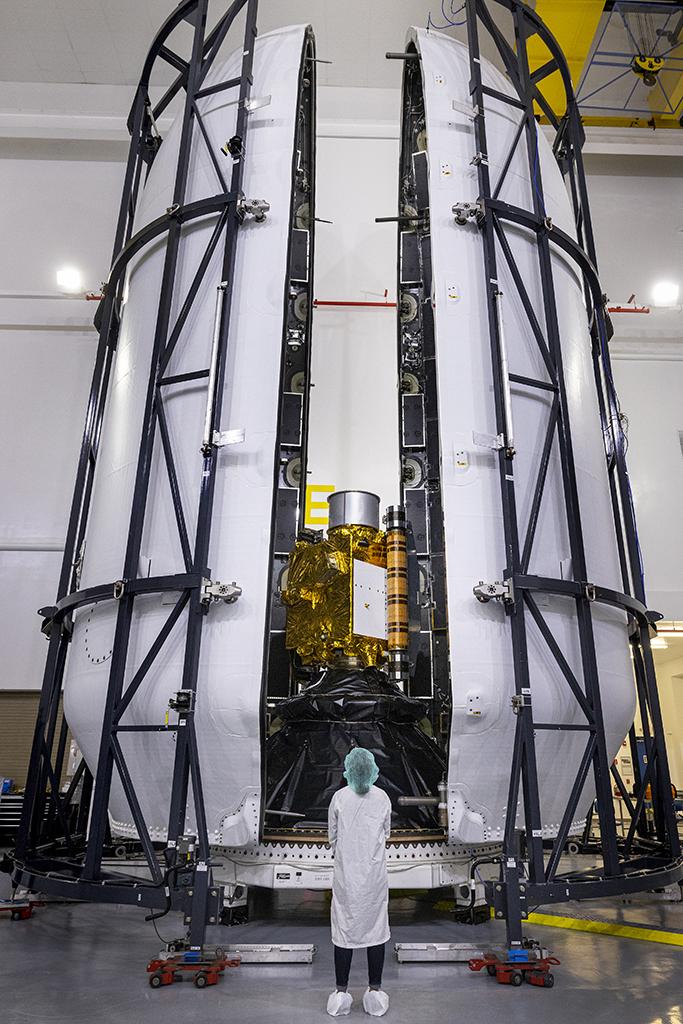 Johns Hopkins University Applied Physics Laboratory System Assurance Manager Alexie Hoyle made her final inspection inside SpaceX’s Payload Processing Facility at Vandenberg Space Force Base in California, as both halves of the Falcon 9 rocket’s protective payload fairing moved toward NASA’s Double Asteroid Redirection Test spacecraft on Nov. 16, 2021. The payload fairing, with the spacecraft securely inside, was attached to the top of the Falcon 9 and protected the spacecraft during launch and ascent.

The 2022 Aviation Week Photo Contest, which is marking its 30th anniversary this year, is off to a fast start. Nearly 100 photos have been submitted so far.

Enjoy these images, and if you’re an aviation or aerospace photographer whose work measures up to these photos, please enter the contest at AviationWeek.com/photo-contest.