Seven months after the sudden onset of the COVID-19 crisis forced Aviation Week to postpone the 2020 Laureate Awards, editors honored more than two dozen winners from around the globe in a virtual event on Oct. 19. Winners of this year’s Grand Laureates—the best of the best in Business Aviation, Commercial Aviation, Defense and Space—were announced and interviewed during the online presentation. This was the 63rd presentation of the Aviation Week Laureates, which have recognized outstanding accomplishments in aviation, space and defense since 1957.

Embraer delivered the first C-390 to the Brazilian Air Force in 2019. The tanker/transport is the largest and most sophisticated aircraft yet developed by Embraer and the most ambitious defense development program in South American history. The Millennium can move troops and cargo, conduct medical evacuations, participate in humanitarian missions and firefighting roles and refuel helicopters and fighter aircraft for combat—with a platform that boasts low life-cycle costs.

Airbus’ launch of the long-range versions of the A321neo has been highly successful. The XLR in particular will enable airlines to fly transatlantic routes using an efficient narrowbody aircraft, reducing trip costs and opening thinner direct routes that have been outside of the scope of widebodies. As aviation recovers from the COVID-19 pandemic, smaller long-haul aircraft are forecast to be in high demand. While the A321LR is already in service, the XLR is planned to enter service in 2023. It has collected more than 450 firm orders, according to Airbus.

Garmin’s Emergency Autoland is the ultimate co-pilot for desperate times. When activated with the push of a red button by anyone on board, the system takes control of the aircraft, evaluates winds, weather and fuel reserves, selects a suitable divert field and flies there while alerting air traffic control of its activation and intent. Upon approaching the selected airport, it descends, lowers flaps and landing gear, slows and touches down on the best runway available and then brakes to a stop. It is an aviation safety superlative.

Veteran aerospace leader Robert Leduc came out of retirement for a third time to return to Pratt & Whitney as president and used his leadership skills to shake up the corporate team and guide the PW1000G geared turbofan engine through a challenging service introduction and production ramp-up, setting it on a path to success. He also oversaw the buildup of the F135 fighter engine. Leduc retired, again, at the end of 2019.

Each year, Aviation Week recognizes an outstanding cadet from each of the
four U.S. military service academies. This year’s honorees are: 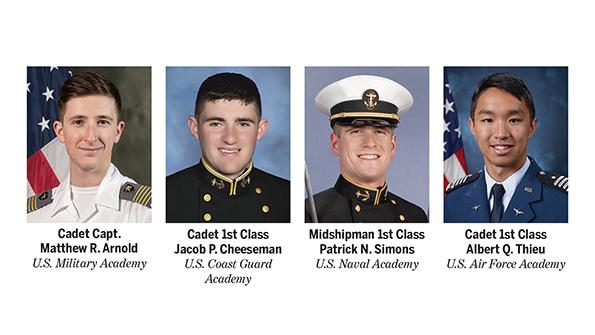