Gallery: A Timeline Of The Truss-Braced Wing 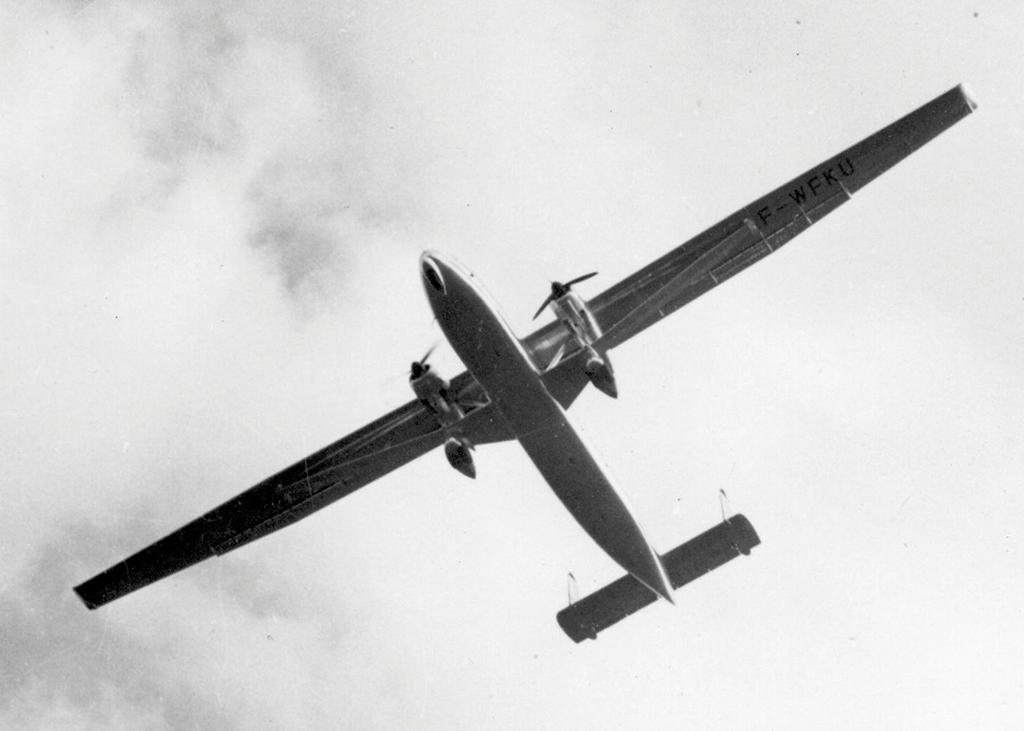 Photo credit: Hurel-Dubois/WikimediaStarting with the HD.10 in 1948, French manufacturer Hurel-Dubois flew a series of aircraft with truss-braced wings. The full-size HD.31 flew in 1953. With an aspect ratio of 20.5:1, only the 45.3-m-span (150-ft.) HD.34 entered production, with eight built as survey aircraft for the Institut Geographique Nationale. 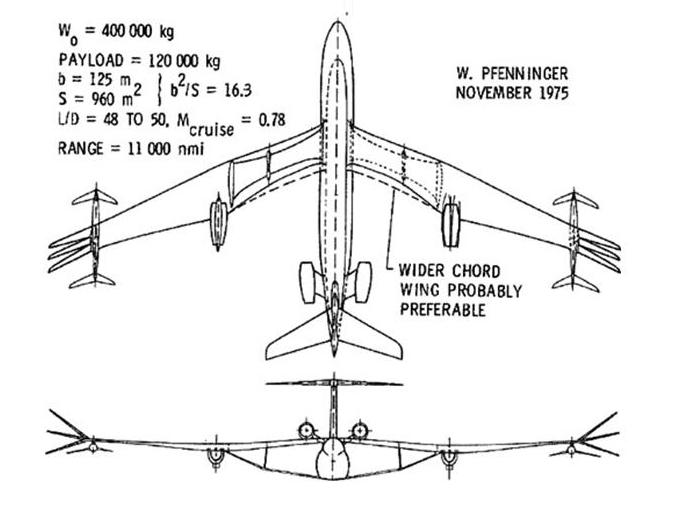 Image credit: Virginia TechNorthrop engineer Werner Pfenninger proposed a design for a Boeing 747-size long-range transport aircraft that combined a truss-braced wing with natural laminar flow. Its span was 128 m, aspect ratio 16.3:1 and lift-to-drag ratio was 48-50:1 in cruise, compared with 17:1 for the 747. 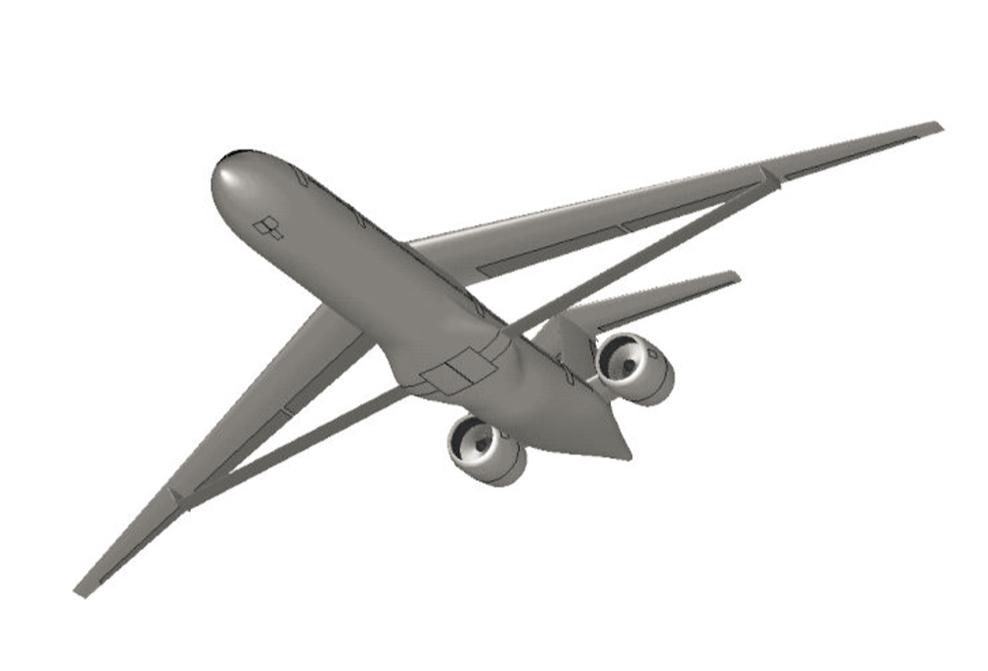 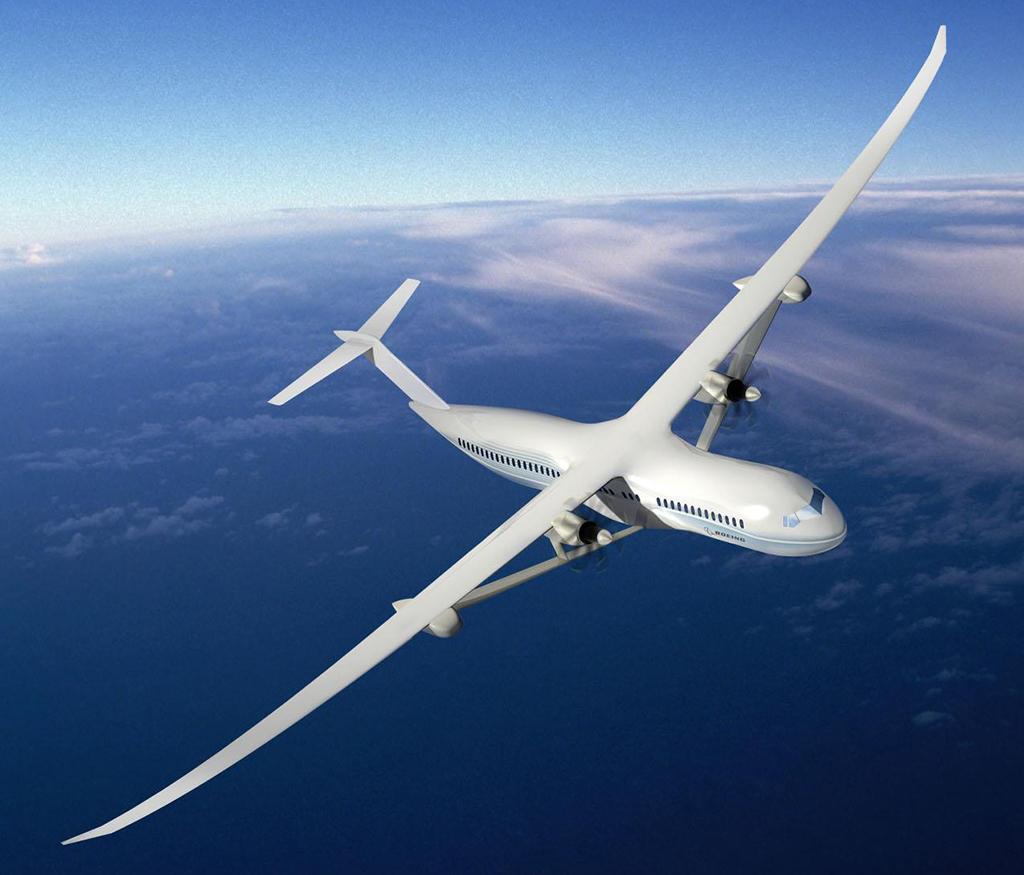 Image credit: BoeingBoeing’s NASA-sponsored Subsonic Ultra Green Aircraft Research (SUGAR) report in 2010 presented a family of TTBW designs for a 737-class ultraefficient airliner to enter service in 2030-35. These included the baseline SUGAR High with underwing engines and a folding wing with an aspect ratio of 23:1. 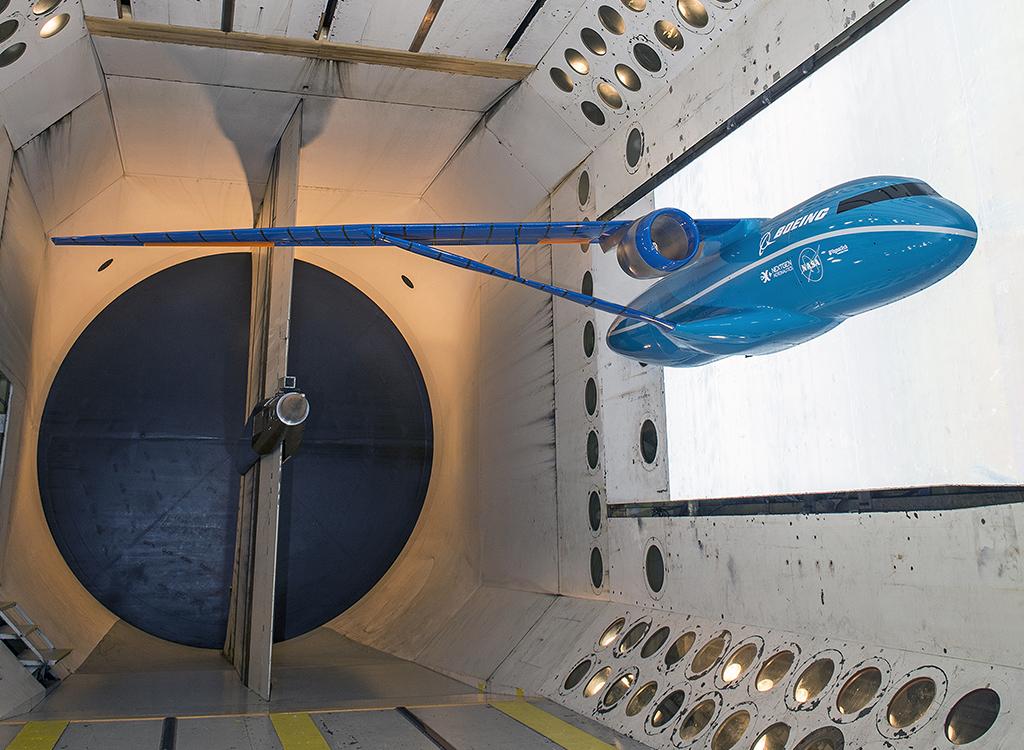 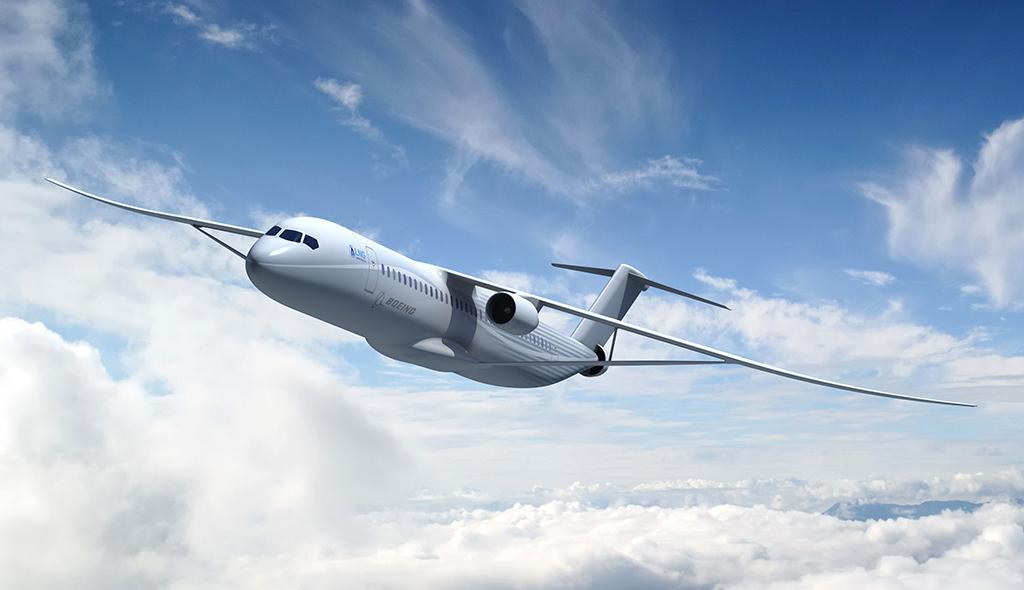 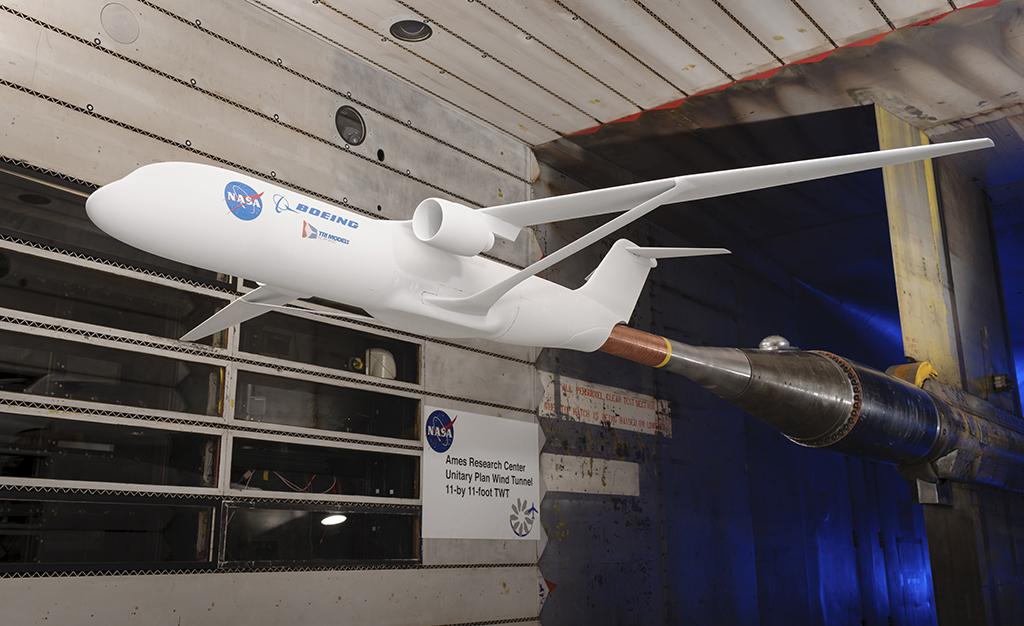 Photo credit: NASANASA and Boeing conducted the first high-speed test of a Mach 0.745-cruise TTBW in the 11-ft. Transonic Wind Tunnel at NASA Ames Research Center in January 2016. This was focused on evaluating the drag increment from interference of the truss with the wing, and concluded the penalty was manageable. 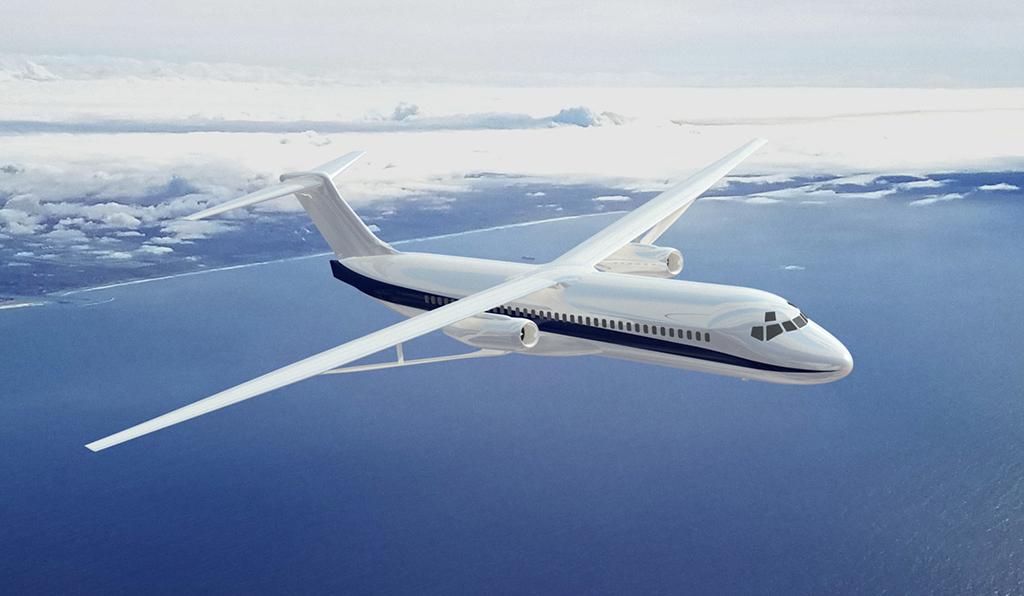 Image credit: BoeingIn September 2016, Boeing received two of five NASA contracts to study concept designs for a future, ultraefficient subsonic transport X-plane. One was for the TTBW, with Boeing proposing a full-scale testbed that mounted the high-aspect-ratio wing on the fuselage of a short-body DC-9/MD-80-series airliner. 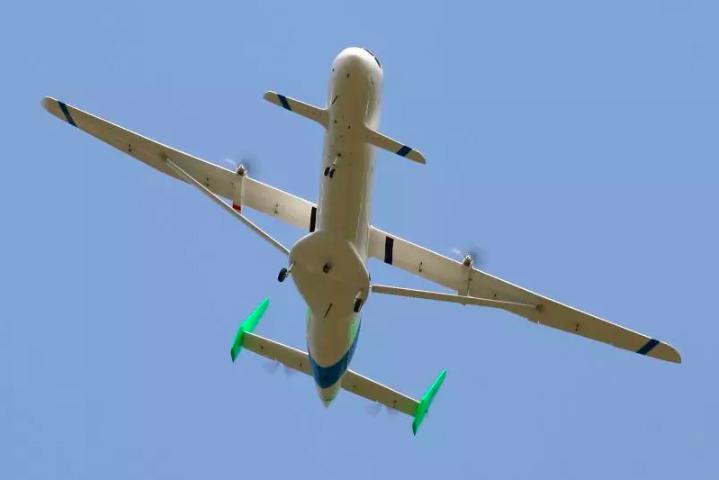 Photo credit: NASAAfter redesigning the TTBW for a higher, Mach 0.80 cruise speed—with increased sweep and modified thickness and a revised wing-strut arrangement—a new series of high-speed tests were conducted in the NASA Ames Transonic Wind Tunnel under Phase 4 of the SUGAR program.

Photo credit: NASAUnder SUGAR Phase 4, Boeing also conducted the first low-speed tests of a high-lift system for the TTBW in the 14 X 22-ft. Subsonic Tunnel at NASA Langley Research Center. Testing of the 8%-scale model ran from September-November 2019, with results aligning with expectations.

The strut- or truss-braced wing is an idea with a long history that is receiving increased attention as manufacturers search for airliner configurations that will substantially reduce fuel consumption and emissions. Here is some of the history of the concept.