Ask the Expert - Integrating New Entrants Into The NAS

Rockets and drones will soon crowd a U.S. National Airspace System that was becoming very congested before COVID thinned out commercial traffic. How will FAA manage the NAS when airline traffic returns and the new entrants expand?

Kip Spurio, once senior adviser to FAA's chief operating officer and now managing director of air traffic systems at Raytheon Intelligence & Space, believes the new users should be integrated into the NAS, not segregated in separate spaces. And he says Raytheon Technologies has or is developing tools in four critical areas—navigation, automation, surveillance and communication—that can help.

Commercial space launches are occurring in increasing volume to put up satellite constellations and will soon support space tourism. Both launches and in some cases re-entry of all or parts of launch vehicles must be managed to eliminate danger and minimize interference with conventional flights.

Spurio notes that Raytheon Intelligence & Space has plenty of technologies to help with commercial space, including space surveillance, orbital and suborbital tracking, and visualizing flight tracks. Combined with Raytheon's understanding of the NAS, commercial traffic and the union of space and conventional flights, these tools are helping the FAA and the Department of Commerce strategically plan to minimize the impact of launches on conventional flights.

"It's just started, but is evolving well," Spurio says.

The FAA does not want to manage all these unmanned aircraft, but to have them manage themselves. RI&S, which provides automation for the critical airspace around U.S. airports, is developing several technologies to enable self-managing autonomous vehicles.

The first tool addresses trajectory-based operations, separating aircraft not based on current positions, but based on four-dimensional trajectories in space and time. TBO is off to a slow start in manned flight, due to varying levels of equipment and abilities of aircraft to generate 4-D trajectories. Traffic managers must work with the lowest common equipment.

But regulators can mandate that new unmanned aircraft are equipped to yield 4-D trajectories. Since these will be controlled by a cloud-based infrastructure, software can be added or modified as needed. RI&S is investing in a TBO engine that can spit out corrections so drones don't run into each other or endanger aircraft in terminal airspace. After testing TBO with unmanned vehicles, the approach could be expanded to conventional aircraft.

There is currently no surveillance of low-altitude airspace where unmanned aircraft will fly. So Raytheon is developing the Skyler™ radar network, based on small, low-power, low-cost active electronically scanned arrays that can be positioned around urban areas and provide a safety backup for low-level flights and safety alerts for instances when a manned aircraft enter the area.

Spurio said that as unmanned aircraft shift from carrying packages to people this additional level of safety will be necessary to meet FAA's requirements for redundancy in protecting people. It would also enable safe operation beyond line of sight, essential for many commercial purposes. Further, Skyler™ provides information on low-altitude weather, including winds and precipitation, not available from any system now. Weather data will be important to safe and economic unmanned flight in the future.

Urban air taxis will need some system to navigate to precision vertical landings in low visibility due to rain or fog. Instrument landing systems used to guide horizontal approaches for fixed-wing aircraft will not work for vertical landings.

RI&S has been developing a system for the Navy called JPALS, short for joint precision approach and landing system. JPALS uses GPS and real-time kinematics to enable an aircraft to vertically land anytime, day or night, in any sea state, on a wildly pitching carrier deck within 20 centimeters of the landing objective. Spurio believes JPALS might be modified to enable air taxis to do the same thing on more stable surfaces, cost-effectively.

Finally, the future NAS will need the best communications system it can obtain. Both growth of conventional traffic and accommodation of new entrants will require highly accurate and reliable transmission of information to and among all participants. Along with positions and trajectories, all participants should be using the same weather data and forecasts as well.

The new FAA Enterprise Network Services, or FENS, program aims to provide that best-practice communication. RI&S's approach to FENS would combine its own leading cybersecurity capabilities with Collins Aerospace's airline systems and the best telecomm provider in each region to produce a software-defined, cloud-based virtual communications network.

In summary, Spurio says, "we provide all four pieces, navigation, surveillance, automation and, we hope, communication." 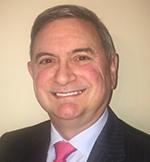 Kip Spurio is Raytheon Technologies managing director of air traffic systems. He is currently the Director of Strategic Initiatives and a Solution Architect for Raytheon's Navigation, Modernization and Sustainment mission area, which includes the Air Traffic Systems business.

Kip has 40 years' of experience in the aviation field through the U.S. Air Force, industry and the FAA. Prior to joining Raytheon in Jan 2016, Kip spent the previous 6 years as the Senior Technical Advisor to the FAA's Chief Operating Officer. Additionally, Kip has held several senior technically oriented positions in the FAA including Chief System Engineer and Chief Architect of the National Airspace System; as well as air traffic controller and Director of Air Traffic Control Resources and Requirements for the Air Force.