Martin Mars Dwarfs The Seaplane Base At Oshkosh 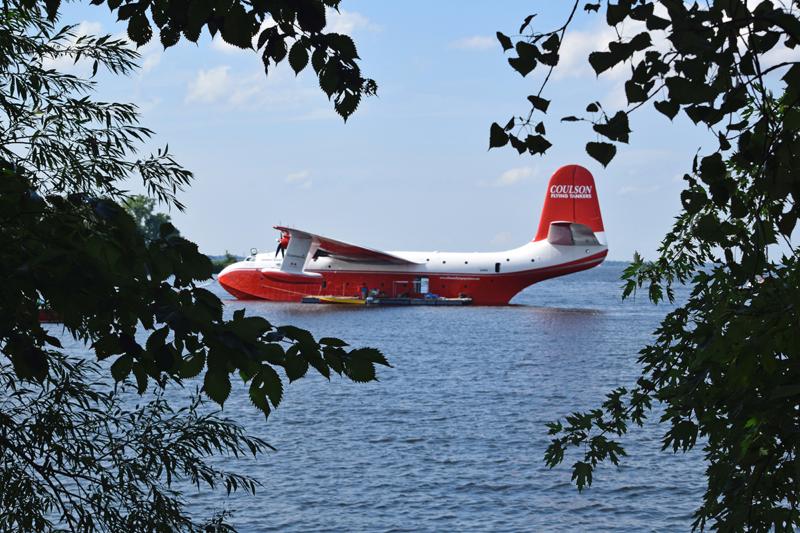 Tahiti or Lake Winnebago? The mighty Martin Mars flying boat, the largest water bomber in the world, arrived at the Oshkosh Seaplane Base on July 23 with aviation enthusiast and collector Kermit Weeks up front. He reportedly paid the $40,000 fuel bill to bring the Mars from British Columbia in return for piloting time south of the border. It’s not his first time at EAA AirVenture in a four-engine flying boat: in earlier years he showed off his British Short Sunderland maritime patrol plane that he now keeps in Florida. 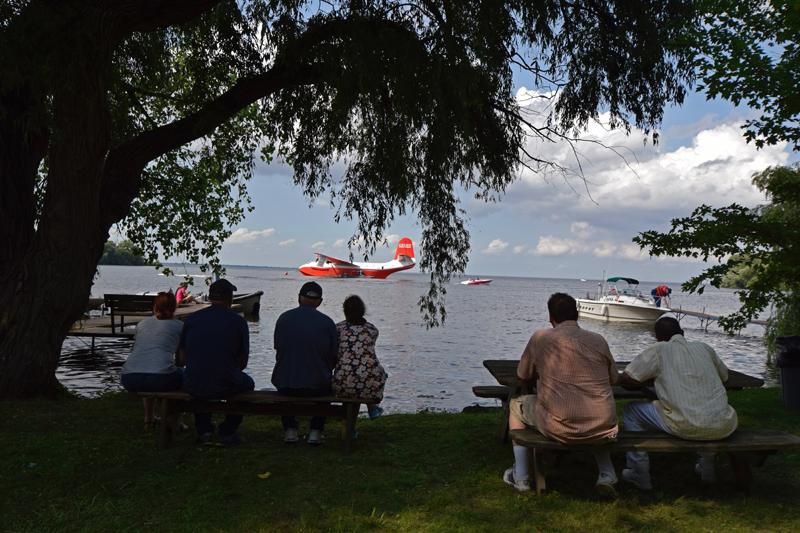 Coulson Aviation reportedly invested $1-million to overhaul the aging air tanker in order to bring it to Oshkosh. Repairs, including some engine work and some sheet metal, took 90 days. Built in the 1940s and with a wingspan of 200 ft (about the same as a Boeing 74), the Mars is the largest aircraft of its kind still flying today.

Only six of the massive aircraft were built, with Coulson Flying Tankers of Port Alberni, British Columbia, owning the two remaining examples since 2007 and using them as water bombers on forest fires throughout the western United States, Canada, and Mexico. 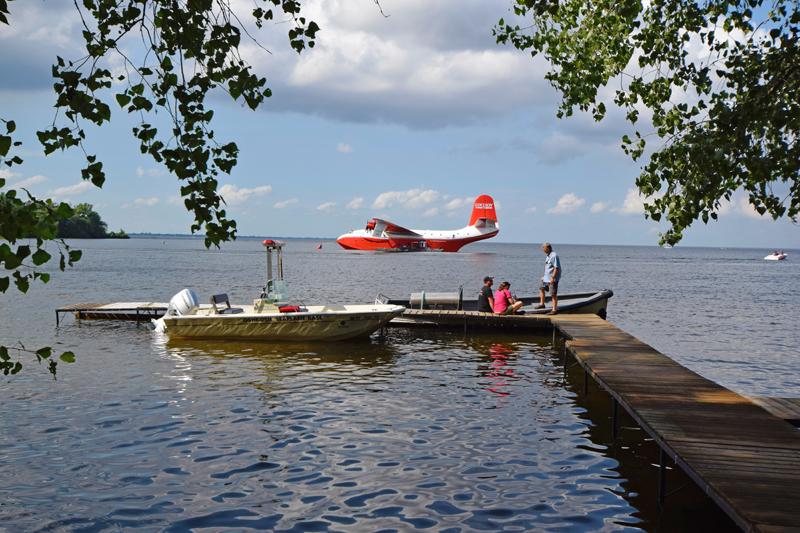 The Martin Mars was originally built in 1942 as a long-range U.S. Navy troop and freight transport to fly between the continental U.S. and Hawaii. The conversion to water bombers gave the aircraft the ability to carry as much as 7,200 gallons of water, enough to cover 4 acres of land in a single pass. Upgrades to the Mars “Hawaii” include an EFIS glass cockpit and the ability to stream live data from certain key on-board, indication systems. Other forms of data that are available from the aircraft in real time are flight tracking, load data measuring, aircraft performance, atmospheric condition at drop readings, and accurate drop location reporting. 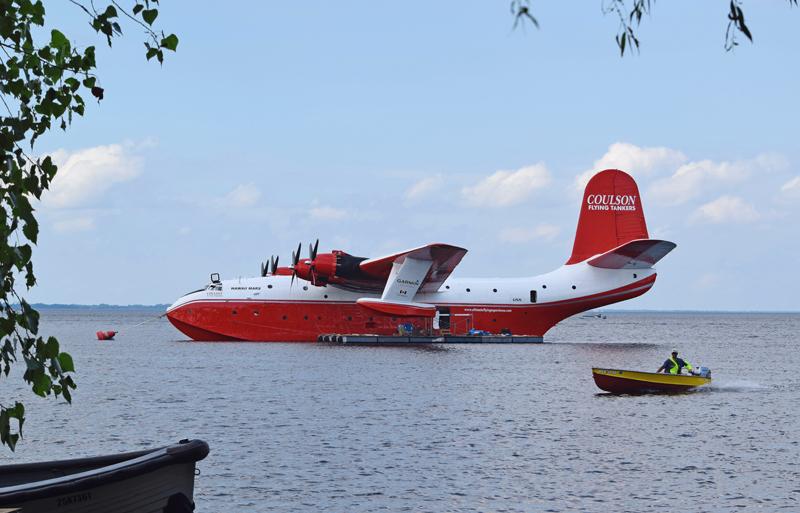 The Mars carries a crew of four: captain, first officer and two flight engineers. Since the loss of the prototype waterbomber in 1961, the Mars operation has been accident-free for both those flying the machines and those working on the ground. 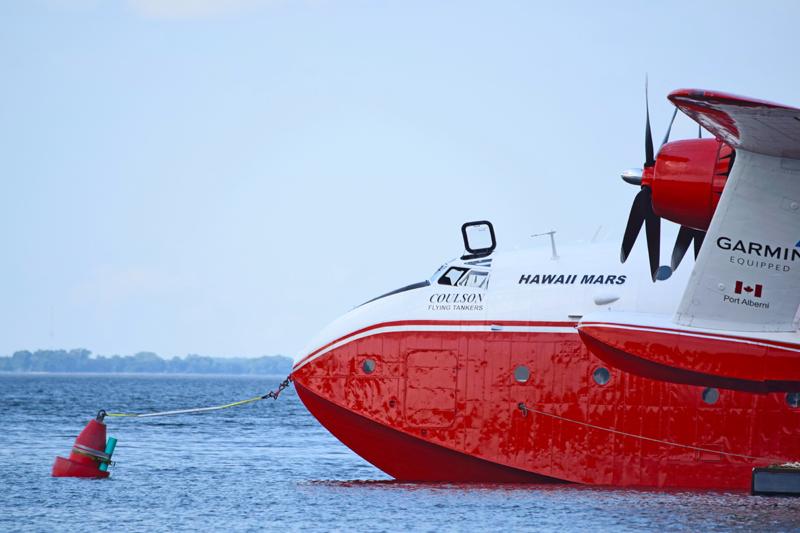 How Do You Fill It Up

The most frequently asked question regarding the Mars is "How do they pick up their water?" This is perhaps the most demanding part of its operation. The captain executes a normal landing, keeps the the aircraft "on the step" and allows the speed to decrease to 70 knots. He then passes engine power to the flight engineer and selects the scoops to the "down" position. The ram pressure for injecting the water into the tanks is such that the aircraft is taking on water at a rate in excess of a ton per second. To account for this added weight, the flight engineer must advance the throttles to maintain a skimming speed of 60-70 kts to ensure the aircraft remains on the step. Pickup time is, on average, 25 seconds. When the tanks are full, the captain will have the scoops raised, call for takeoff power from the flight engineer and carry out a normal loaded takeoff. 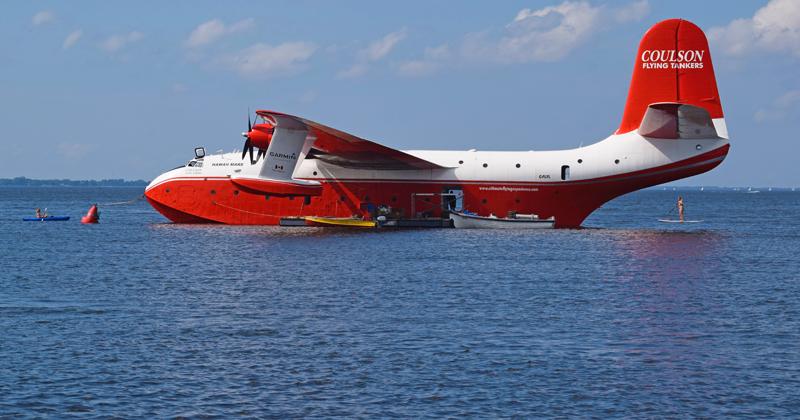 This might be the last time most of us see a Martin Mars in flight, as “Hawaii” and its non-flying companion, “Philippines,” are up for sale. And it might be the last time you can fly on one. Coulson is offering two-day pilot courses on the Mars for just $25,000 per head. There is, of course, a group discount!

A Cessna A185F with STOL conversion splashes down after arriving from Texas. 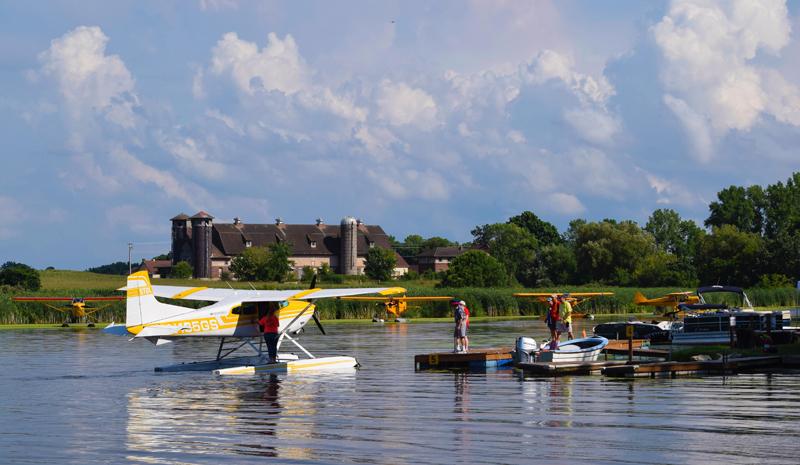 The bucolic scene at the Oshkosh Seaplane Base, with yellow Piper Cubs bobbing gently in front of a traditional barn.

Many Types on Floats

Fans of float flying flock to Lake Winnebago to watch the waterborne arrivals. Here a Husky, a zebra-striped Kitfox and a pair of Cessnas float gently at anchor. 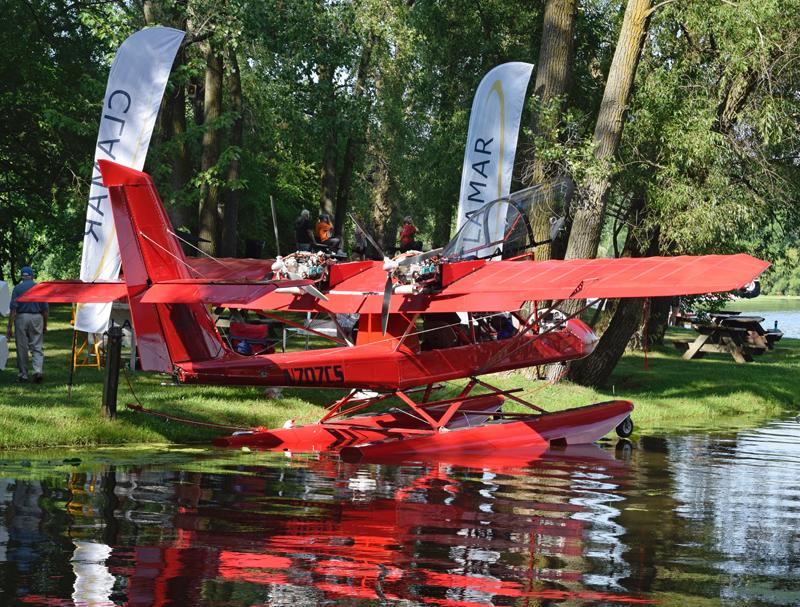 A twin-engine amphibious AirCam is an ideal way to explore America’s waterways and open vistas. This example is based, appropriately, in Lewis and Clark County, Montana.

Flying boats and seaplanes of many types come to Oshkosh 2016.

All Photos by Maureen Spuhler