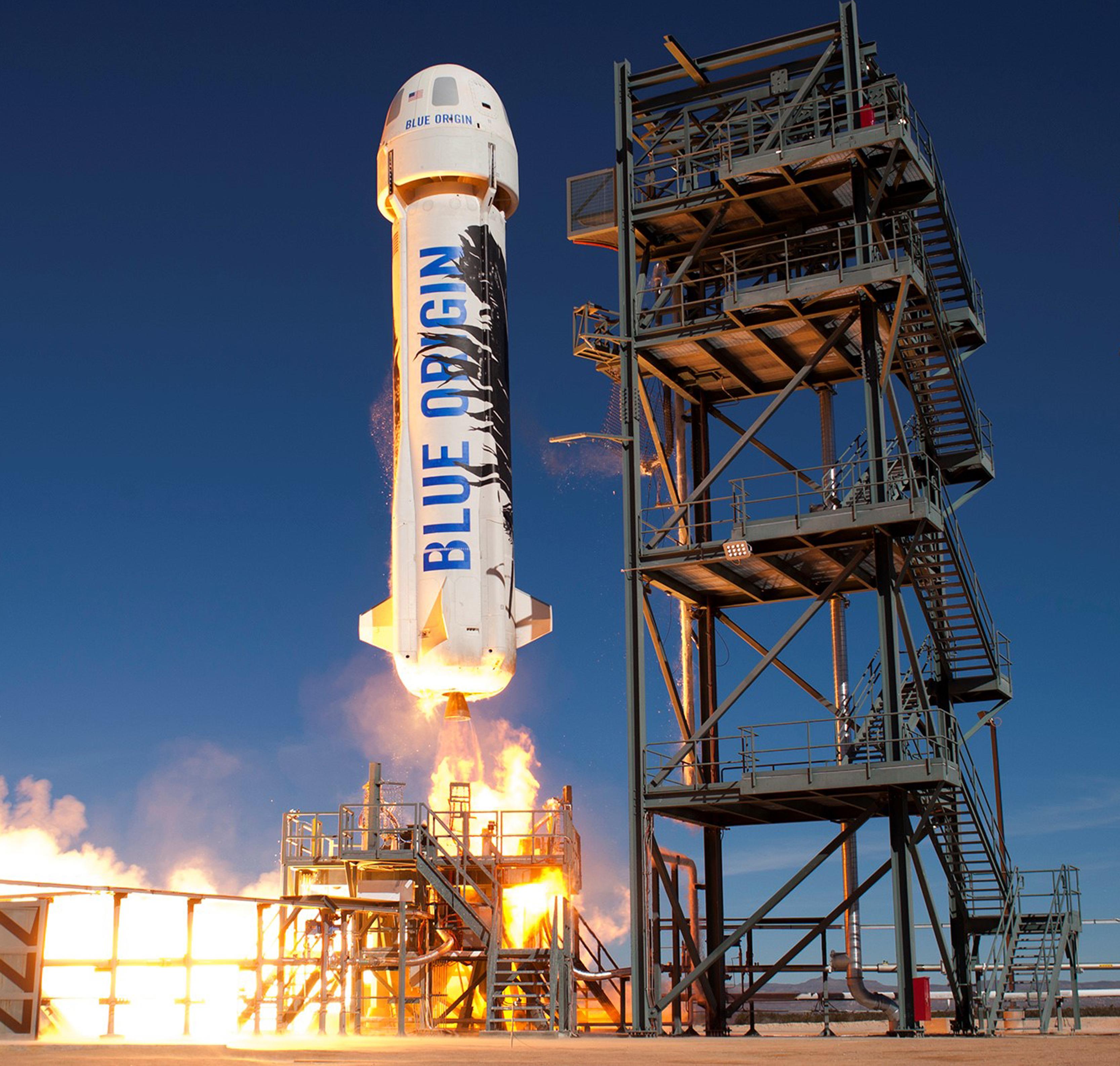 Blue Origin: This One to be Retired

Blue Origin’s New Shepard first flew into space (100 km or 62 miles, or 330,000 ft above Earth's sea level) on Nov. 23, 2015, and has made four more flights since then. The last was on Oct. 5, when it successfully tested the capsule’s escape system. The New Shepard booster will now be retired and displayed in a museum. The Smithsonian, perhaps? Blue Origin will not say. 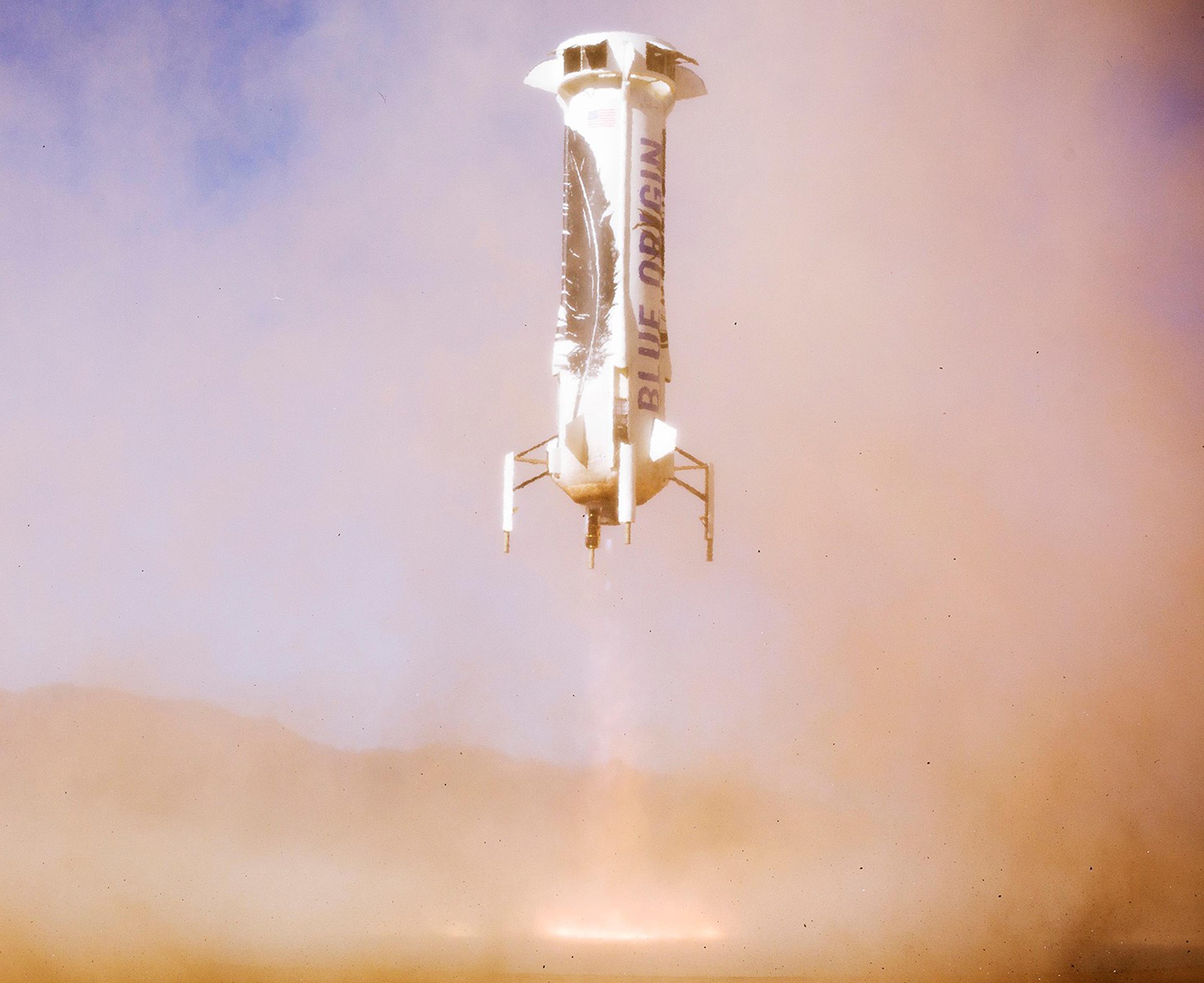 Access to space must be affordable, and the fastest way to bring costs down it to reuse the rocket booster. Blue Origin’s New Shepard returns to Earth vertically, the first rocket to do so. The landing is achieved by firing the BE-3 rocket motor to decelerate the booster in the final seconds. 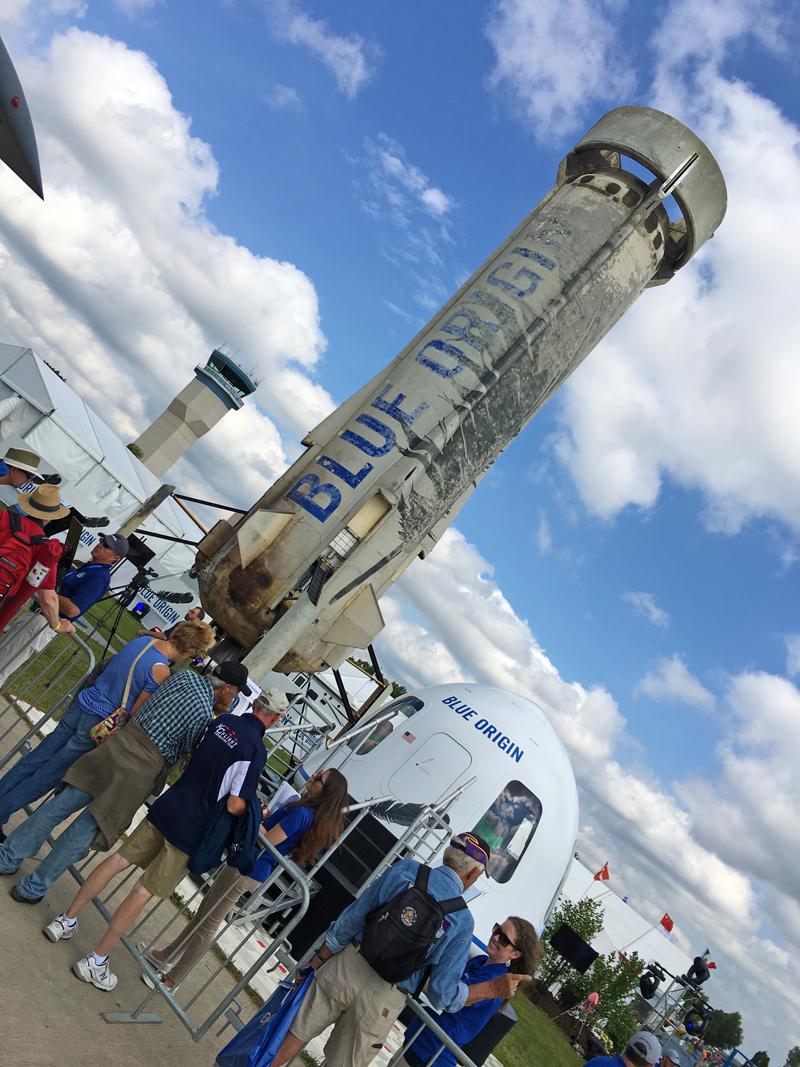 The Blue Shepard launcher here at EAA AirVenture is a little worse for wear after five shots into space. It looks “toasted” says Ariane Cornell, Head of Astronaut Strategy & Sales for Blue Origin, after flying through the exhaust plume of the crew capsule during the airborne test of the human-carrying vehicle. Engineers had not expected the booster to survive the test, but it stabilized itself and landed normally. 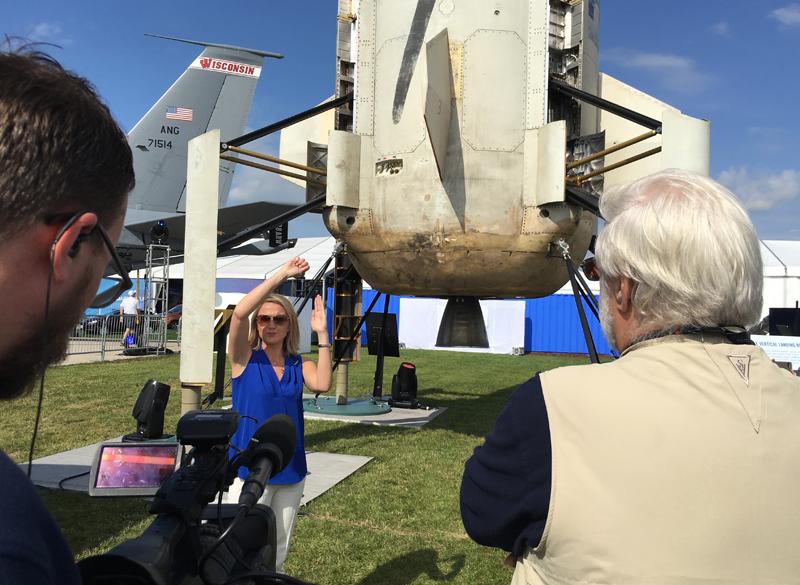 Ariane Cornell describes how the fully throttleable BE-3 rocket engine can be controlled to give 20,000 pounds to 110,000 pounds of thrust. It is designed to fly 25 missions with no more than a borescope examination while still in the rocket; the booster is designed for 100 uses. Turnaround time between missions is planned to be no more than 24 hrs. 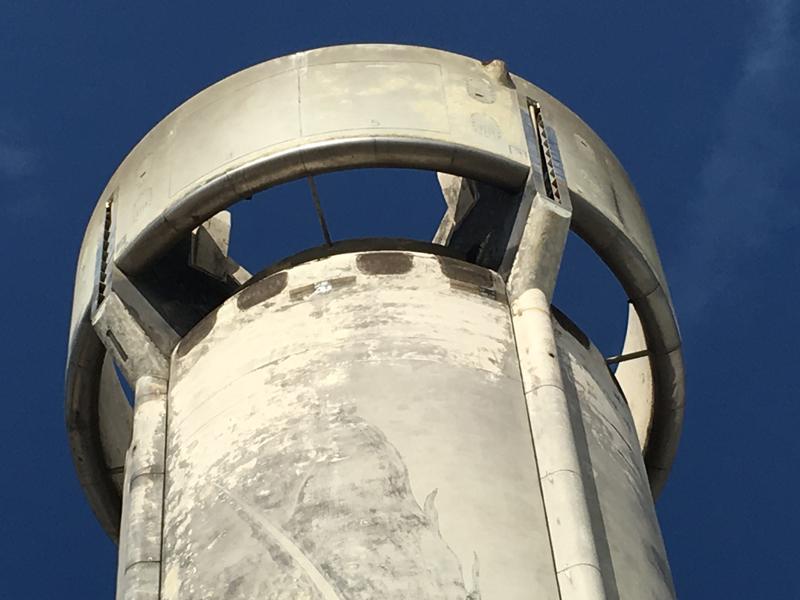 Aerodynamic features at the top of the booster help stabilize it during descent. 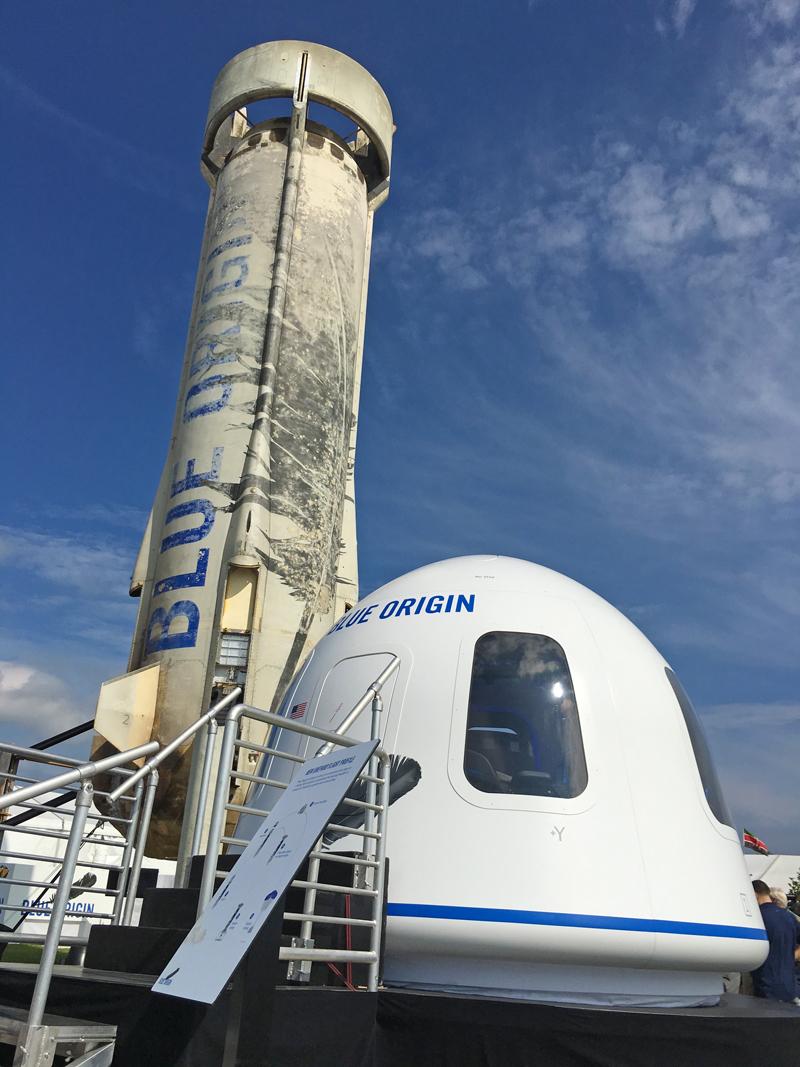 Blue Origin was offering ‘test flights” on board the mockup capsule, where six EAA visitors at a time could recline in the actual seats and experience a truncated flight, complete with video and sound, played on individual video screens at each seat. The video was shot from earlier launches of Blue Origin. 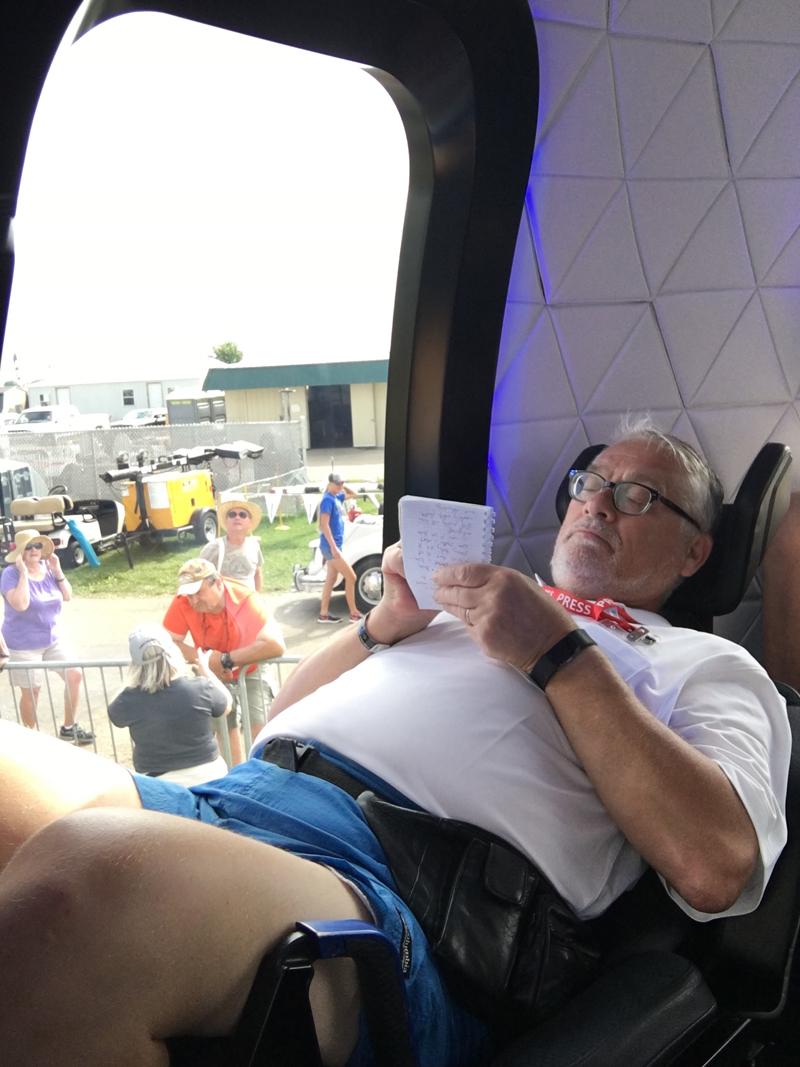 Aviation Week editor John Morris takes notes as he works from a remote location somewhere in space during Blue Origin’s simulated mission. Passengers will spend one day training before their ride, which is a straight up, straight down, sharp parabola peaking above 100 km, or 300,000 ft. They will experience up to 3g during launch, and a momentary 5g on the way down as the capsule decelerates. 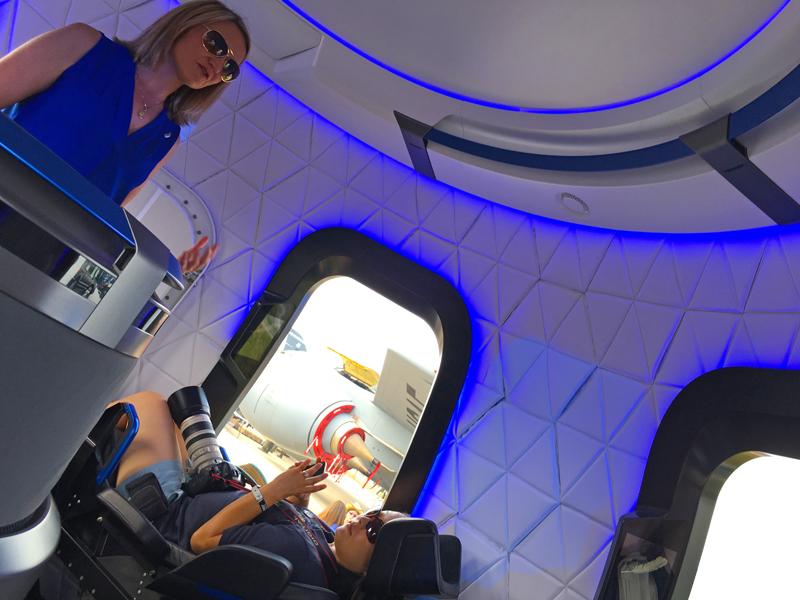 Passengers will unstrap their seat belts near the top of the parabola and experience weightlessness for up to four minutes. Handholds are designed into the capsule’s interior so they can pull themselves around or even turn somersaults. The capsule returns on a pre-determined trajectory – it has no guidance system. But Blue Origin scrutinizes the weather on the day of launch, sends up weather balloons, and simulates the exact flight track on the way up to make sure it comes down where planned. 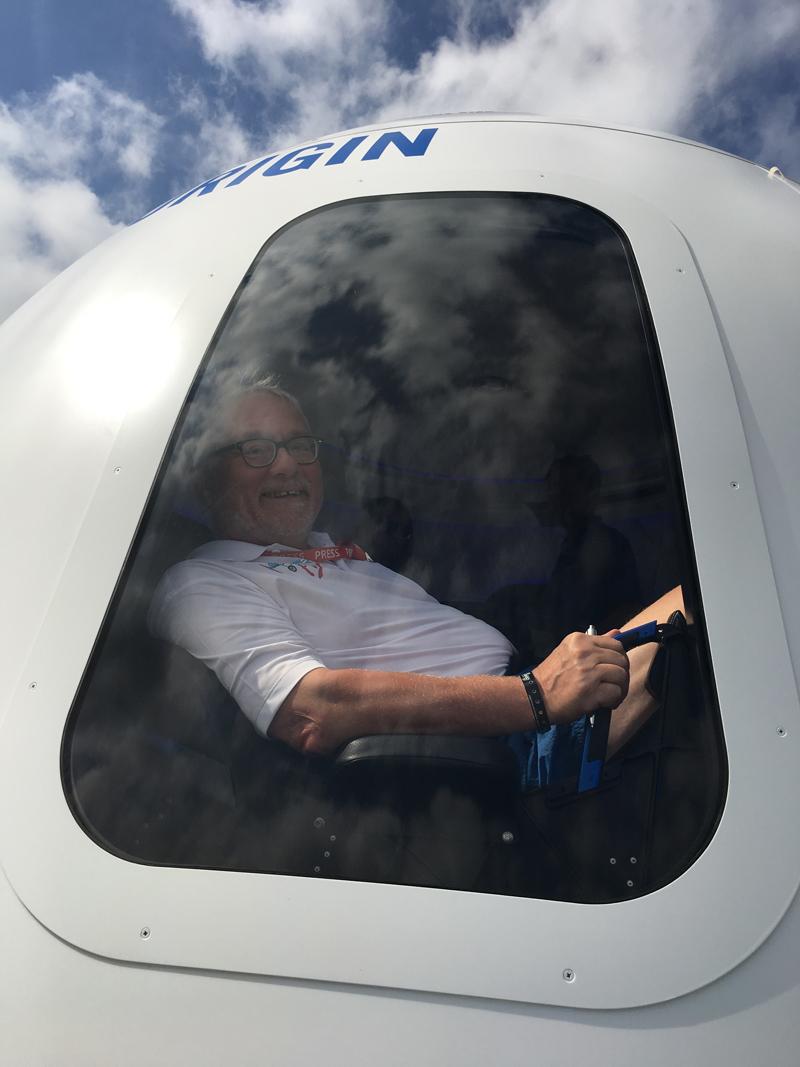 Room With a View

The windows are huge – they take up more than one-third of the capsule’s surface area, offering every astronaut stellar views during flight. The panels are made of multi-pane acrylic. The capsule flown on test flights to date has not had windows fitted – instead, they were painted on to represent the later model. The next capsule to fly will have windows, which will have undergone extensive pressure testing. 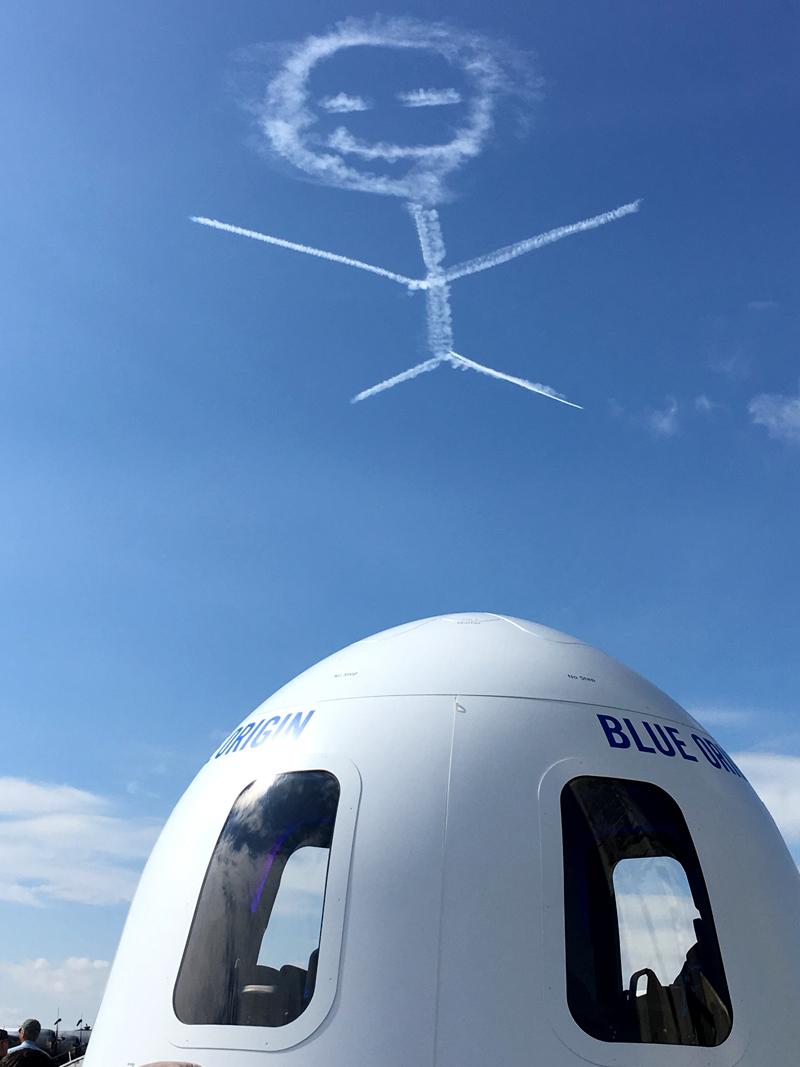 Art created by a skywriting airplane beams down on Blue Origin at EAA AirVenture.

Buy a shot into space with Blue Origin and get priority on your next ride or on one in its planned orbital space capsule.

Amazon founder Jeff Bezos’ space-ride company hasn’t yet said how much a straight up-and-down ride will cost in the six-man capsule perched atop the reusable New Shepard booster, nor when the first human-carrying launch will take place. But it is already working on a more powerful New Glenn reusable booster and a capsule that will take fare-paying passengers into orbit.

Here at EAA AirVenture Blue origin is showing its five-times-into-space booster, and offering simulated demonstrations of the ride into space in its capsule.

The next test flight will likely be before the end of the year, featuring a capsule with real panoramic windows instead of the test article’s plain cabin walls, says Ariane Cornell, head of Astronaut Strategy & Sales for Blue Origin.

The company is also developing a moon lander.

Its vision is to help develop space with millions of humans living and working there, she says. “The first key step toward that goal is to bring down the cost of access, and that can only be achieved with an operationally reusable launcher,” she notes.

Blue Origin will also carry out other missions. It has been signed up by the German Aerospace Research Center (DLR) to fly two experiments on a suborbital flight on New Shepard, and by Eutelsat for launch services on New Glenn in 2012-22. Seats can be taken out to make way for payload, or one or two can be removed so scientists can fly with their experiments.