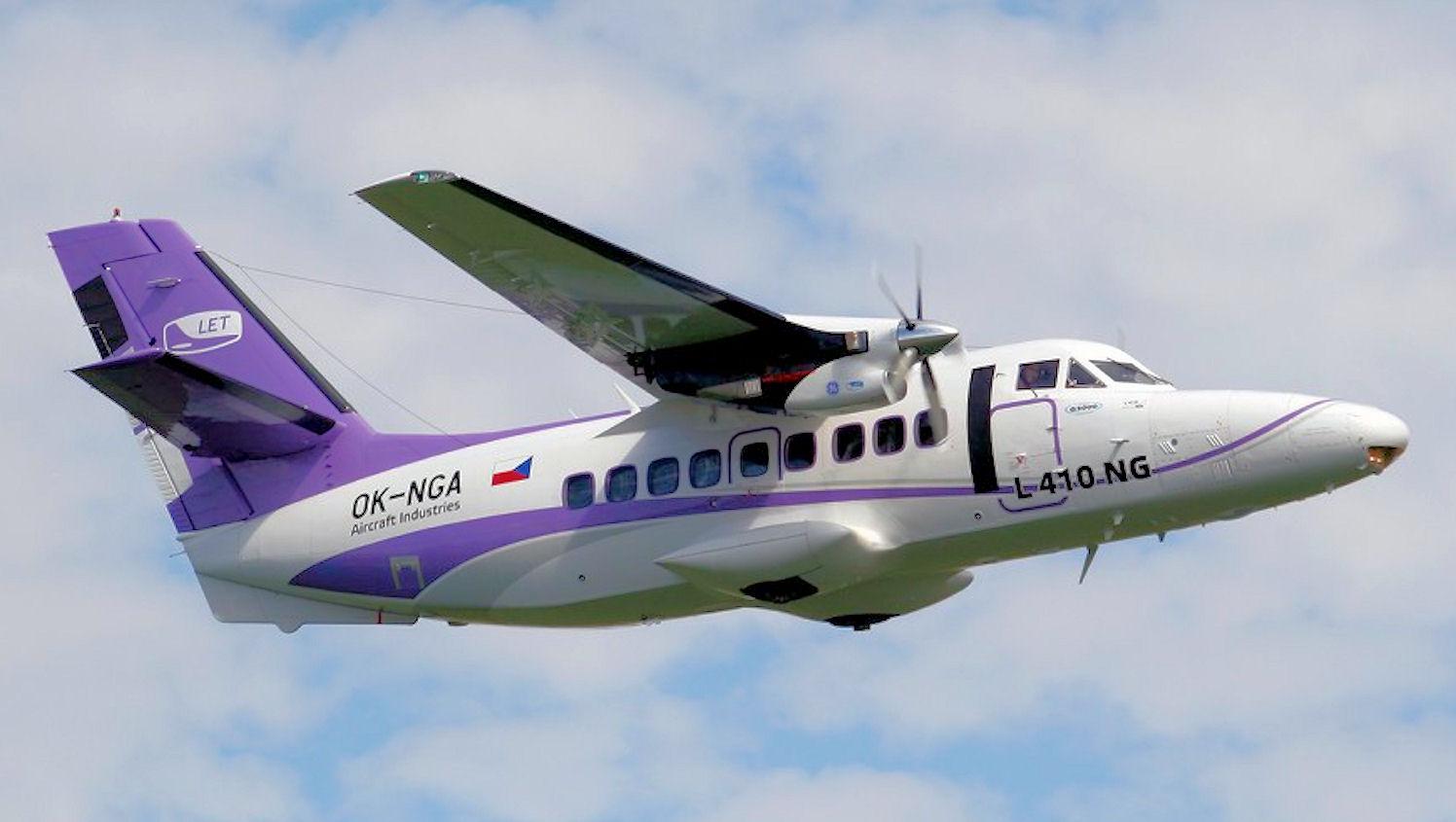 A “new generation” incarnation of the Soviet-era Let L 410 will soon be delivered to its first customer, even as steady production of earlier versions continues in the Czech Republic for worldwide operations—not least in Russia. In an eight-year program costing $26 million, Aircraft Industries (AI) substituted 850-shp General Electric H85-200s for the original Walter M601s and added Garmin G3000 avionics, a modernized cabin, a new wing with integral fuel tanks and a longer nose with doubled baggage space—and flew the result in July 2015. The European Aviation Safety Agency certified the NG on Dec. 19, 2017, while on March 1 of this year, series manufacture was formally launched.

Performance improvements include generally enhanced hot-and-high characteristics; flight lifetime doubled to 30,000 hr.; maximum cruising speed of 227 kt.; max fuel range of 1,388 nm (making wingtip tanks optional, rather than obligatory); and endurance over 10.5 hr. Engines are geared to turn the Avia AV 725 five-blade propellers at slower speeds, for reduced noise; and payload is 4,748 lb. in the form of 19 passengers or equivalent freight, although executive transport conversions are a further possibility. 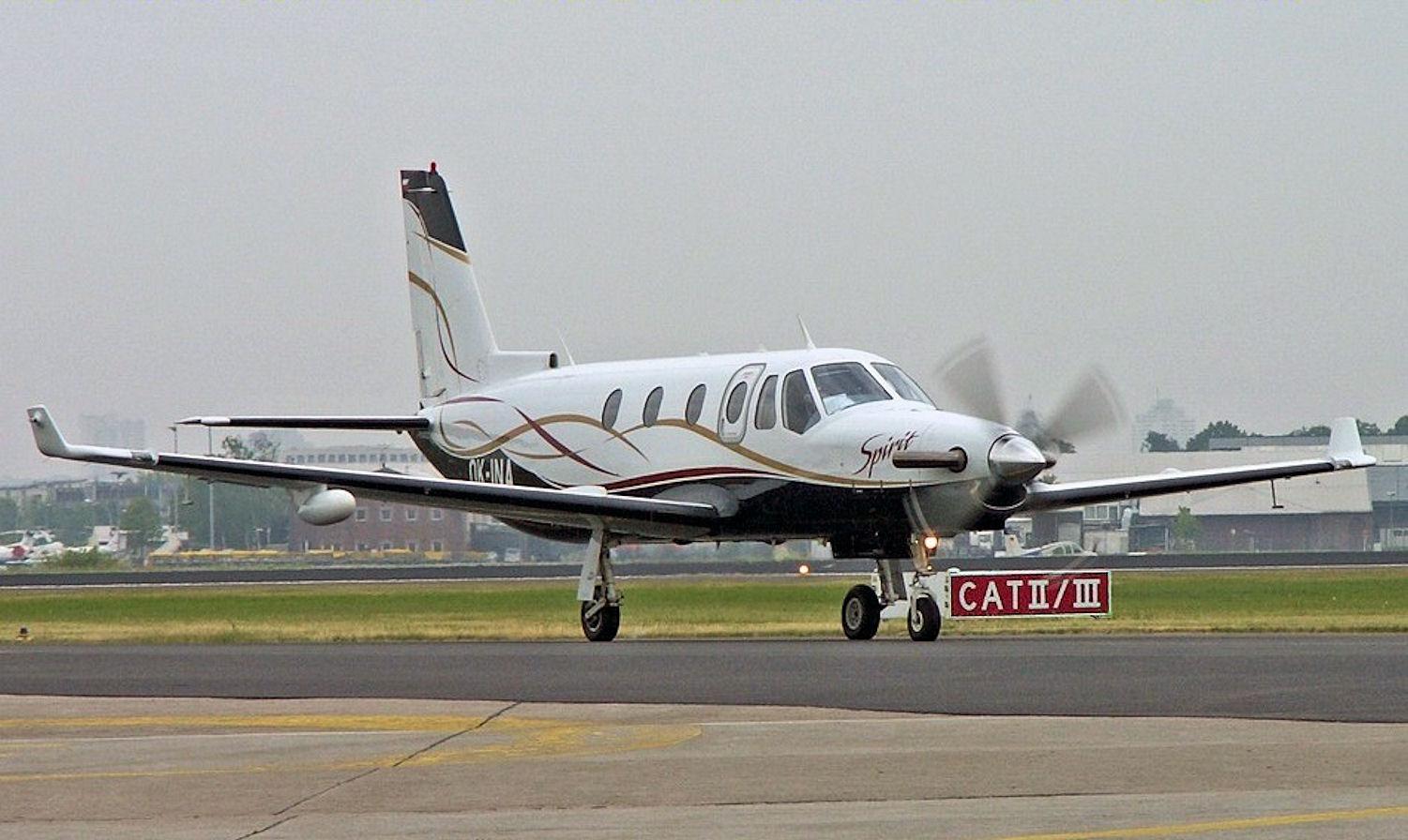 Nominally based in London, Aircraft Integrated Solutions intends to place in production the Ibis Aerospace Ae 270 Spirit on behalf of COPS investment house of Lebanon, having acquired the type certificate from Aero Vodochody in 2016. The Czech project was abandoned in 2007, after three prototypes and three production-conforming examples had taken the venture as far as EASA certification. In a three-cornered arrangement, Aero is listed as the manufacturer, while design authority is subcontracted, since April this year, to S4A in Spain. The one element missing is the existence of a production line in any of these locations.

With a single Pratt & Whitney Canada PT6A-66A turboprop flat-rated at 850 shp, the Ae 270 transports two crew and either eight passengers or 2,645 lb. of freight, both loaded through the 4-ft., 1-in.-wide cargo door. NBAA ​instrument flight rules (IFR) range is 1,420 nm, or 1,594 nm, visual flight rules (VFR). What is the cruising speed in knots? Refer to the aircraft’s designation.

Non-U.S. rights to the large kit-built projects of the previous Epic Aircraft at Bend, Oregon, were sold to China Aviation Industry General Aircraft in a bargain bundle in 2010. The Epic LT and slightly smaller, five-seat Escape turboprops then became the Primus (later Navigator) 100 and 150, respectively, to be manufactured at Zhuhai for flyaway sale only. First to emerge, the 150 had been rebranded as the Leadair AG300 when it made its “official” first flight on July 5, 2014, powered by an 850-shp General Electric H85 turboprop. Certification in 2015 and a $1.5 million price were then confidently advertised for an aircraft capable of 1,350 nm and a cruising speed of 324 kt.

The prescience of that providential purchase has possibly proved problematic. For unexplained reasons the prototype did not follow up with a wheels-retracted sortie until November 2015. Then, while a static test airframe passed its trials in May 2016, the two preproduction AG300s that were to have swiftly followed upon that success still have not been reported in the air. CAIGA continues to list the program as active but is short on details of delivery and price, although the problem might be no more serious than that the company’s giant AG600 flying boat has absorbed all available resources.

Last Convention’s hopes of a prototype Denali gracing the static display in 2018, after a planned third-quarter maiden flight, evaporated earlier this year when the date with the atmosphere was revealed to have slipped to early 2019, to be followed by certification to FAR Part 23 (single pilot), and service entry in 2020.

Avionics are based on Garmin’s three-screen G3000 suite, with weather radar, synthetic vision, dual FMS and dual WAAS-enabled GPS receivers for navigation, dual transponders with ADS-B "In" and "Out," TAWS-B, TCAS I, dual AHRS and dual air data computers.

In May, Cessna confirmed that work had begun on fabricating three prototypes to follow the static test airframes already under test. The 4,000-hr. TBO GE93 has been bench running, as scheduled, since last December. The Denali will be built at Wichita on the line vacated by the transfer of Caravan production to Independence, Kansas.

The Model 408 designation is strongly suggestive of which aircraft this is to be the twin-engine big brother. Any lingering doubts are dispelled by the naming, last November, of FedEx as the launch customer for an initial 50 of a freighter version capable of accepting three LD3 containers, or 6,000 lb. equivalent, in its windowless hold. For commuter use, there will also be a 19-passenger version with windows—but without pressurization.

Possessing a garde less avant than its Denali stablemate, the SkyCourier relies on the trusted formula of 1,100-shp P&WC PT6A-65 turboprops and four-blade, aluminum propellers from McCauley to convey it sedately at 200 kt. over 400 nm. with a 5,000-lb. load, or 900 nm with reduced cargo. Strut-braced wings, a T-tail, fixed landing gear and a Garmin G1000 suite complete the ensemble. Deliveries of the Part 23-certified airplane to FedEx are due from 2020 at the rate of one per month—two decades after FedEx had intended to accept 50 Ayres LM200 Loadmasters for the same job.

Let none accuse Dornier of precipitate action. Having rolled out the first production Seastar amphibian at Oberpfaffenhofen, Germany, in August 2017, the company is not expecting to fly the machine until the first half of next year. Flight trials will be for revalidation of its 1990 type certificate, by reason of several upgrades including a Honeywell Primus Epic 2.0 cockpit, new five-blade MT propellers, new landing gear from Sumitomo, and a water-maneuvering thruster.

The Dornier family’s 1980s company was reborn in 2015 with the assistance of Chinese money, having previously built only two (arguably three) prototypes of the 12-passenger, push-pull (P&WC PT6A) turboprop in its previous incarnations. Now employing composite parts supplied by Diamond Canada (also a Chinese-controlled company), the amphibian sells for $7.5 million, cruises at 180 kt., and has a range of 900 nm. 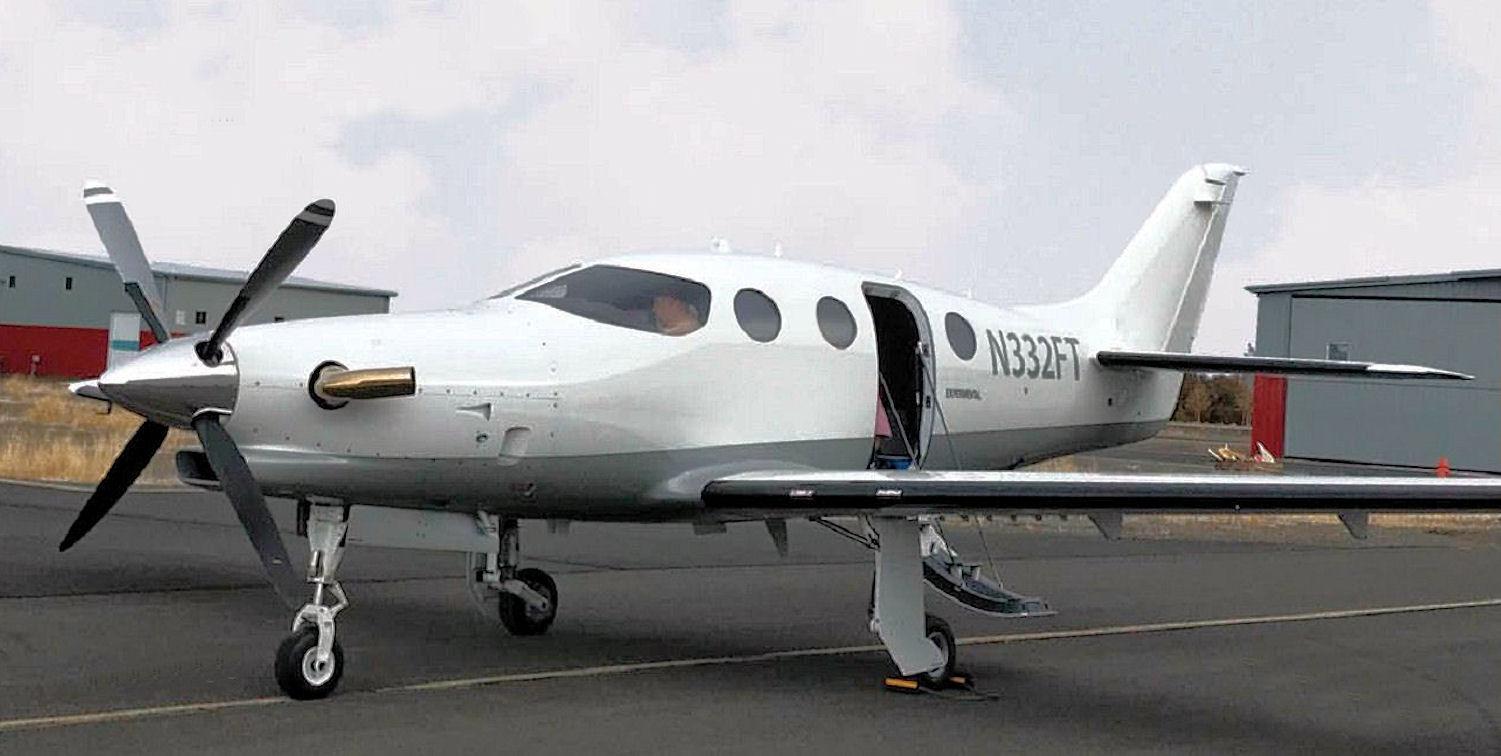 In April, Epic assisted its 54th and last constructor-customer to complete his LT kit, clearing the way for a full-throttle drive toward a factory-produced version. The second, production-conforming E1000 prototype flew on Jan. 23; completion of static testing was announced on July 25; and, simultaneously, with a combined 625 hr. logged, Type Inspection Authorization (TIA) was granted as a preliminary to FAA certification and first deliveries early next year. And, after years of stand-ins by LTs, a genuine E1000 is earmarked for static display at Orlando Executive this week.

Russian-owned, Oregon-based Epic flew its first E1000 in December 2015, and despite the loss of some early Russian orders, it has 85 mostly U.S. customers lined up for its $3.25 million, P&WC PT6A-67-powered offering. If more step forward, Epic is talking about manufacturing 50 per year. 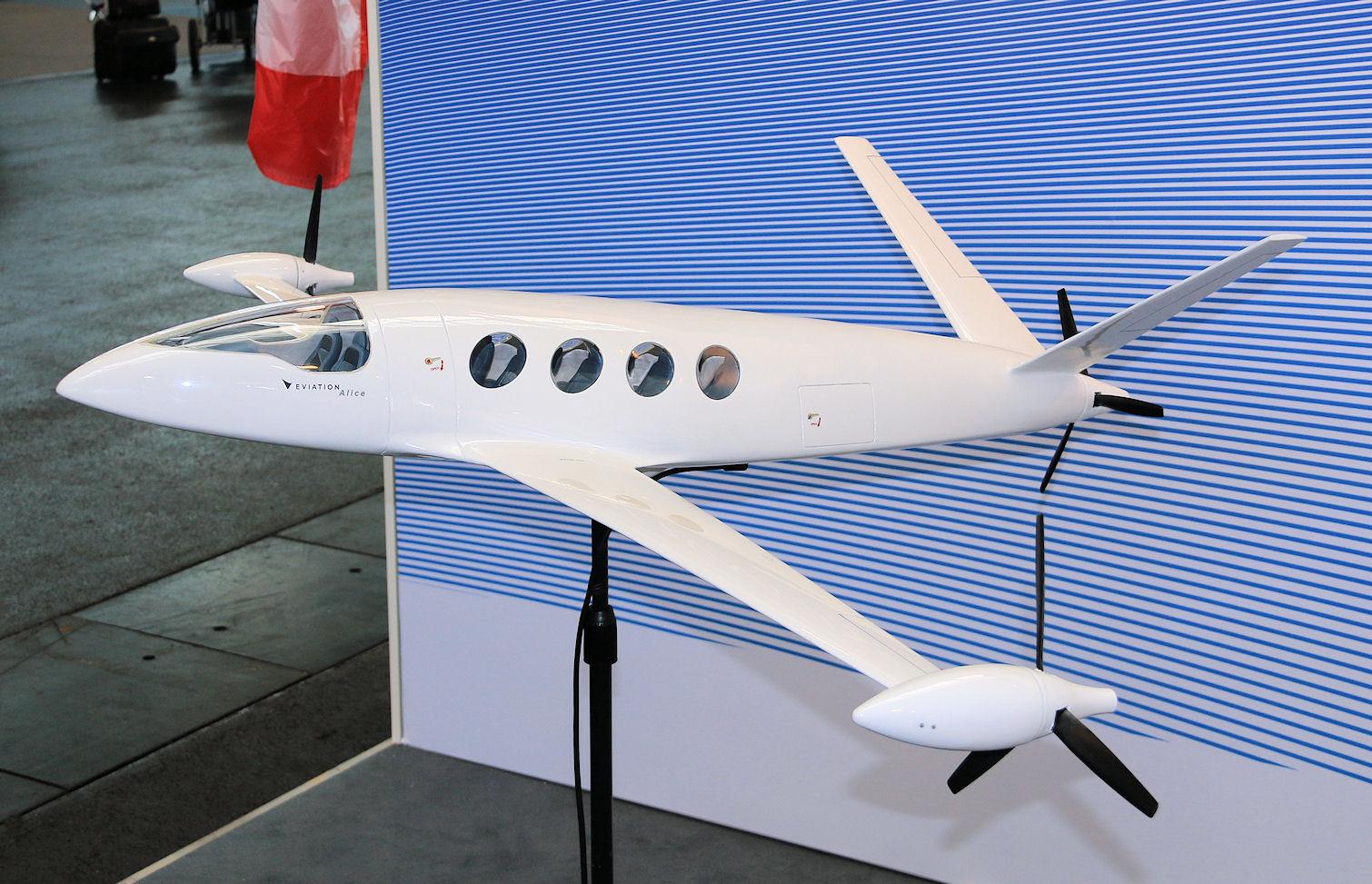 An aspiration to become “the Tesla of the skies” prompted foundation in 2015 of what is now Israel-based Eviation Aircraft. The basic design, of which a prototype could be built next year, has three electric-driven propellers, at the wingtips and in rear fuselage. Two same-size versions, both fly-by-wire, are envisaged: Alice for air taxi operations, certified to Part 23, IFR, capable of flight into known icing with power from an all-lithium-ion battery; and the extended-range Alice ER, having a more powerful Aluminum-Air system with lithium-polymer buffer. The latter, intended for the low-cost executive transport market, has a pressurized cabin (4,000 ft. at FL 280) and should be available by 2023 at a cost of $2.9 million. Constructed mainly (95%) of composites, the Alice ER has Garmin G5000 avionics, 738-nm range and a cruising speed of 270 kt.

After a decade of tribulations, John Meekins’ conception of an ideal six-seat amphibian took to the skies in Titusville, Florida, on Aug. 6. Having come close to abandonment three years ago, it was revived at the insistence of potential buyers in Brazil, Canada, Chile, China, the Dominican Republic, France, Indonesia, the UK and elsewhere. Comp Air Aviation was then engaged to finish the prototype, although the matters of certification and series production have yet to be resolved.

Built of carbon fiber, and configured with an unusual twin-tailboom and float arrangement to lower the center of gravity and reduce the risk of overturning, the sleek Privateer has a pusher propeller turned by a Czech 724-shp Walter M601 turboprop. Cruising speed is estimated as 195 kt., and range, 870 nm. 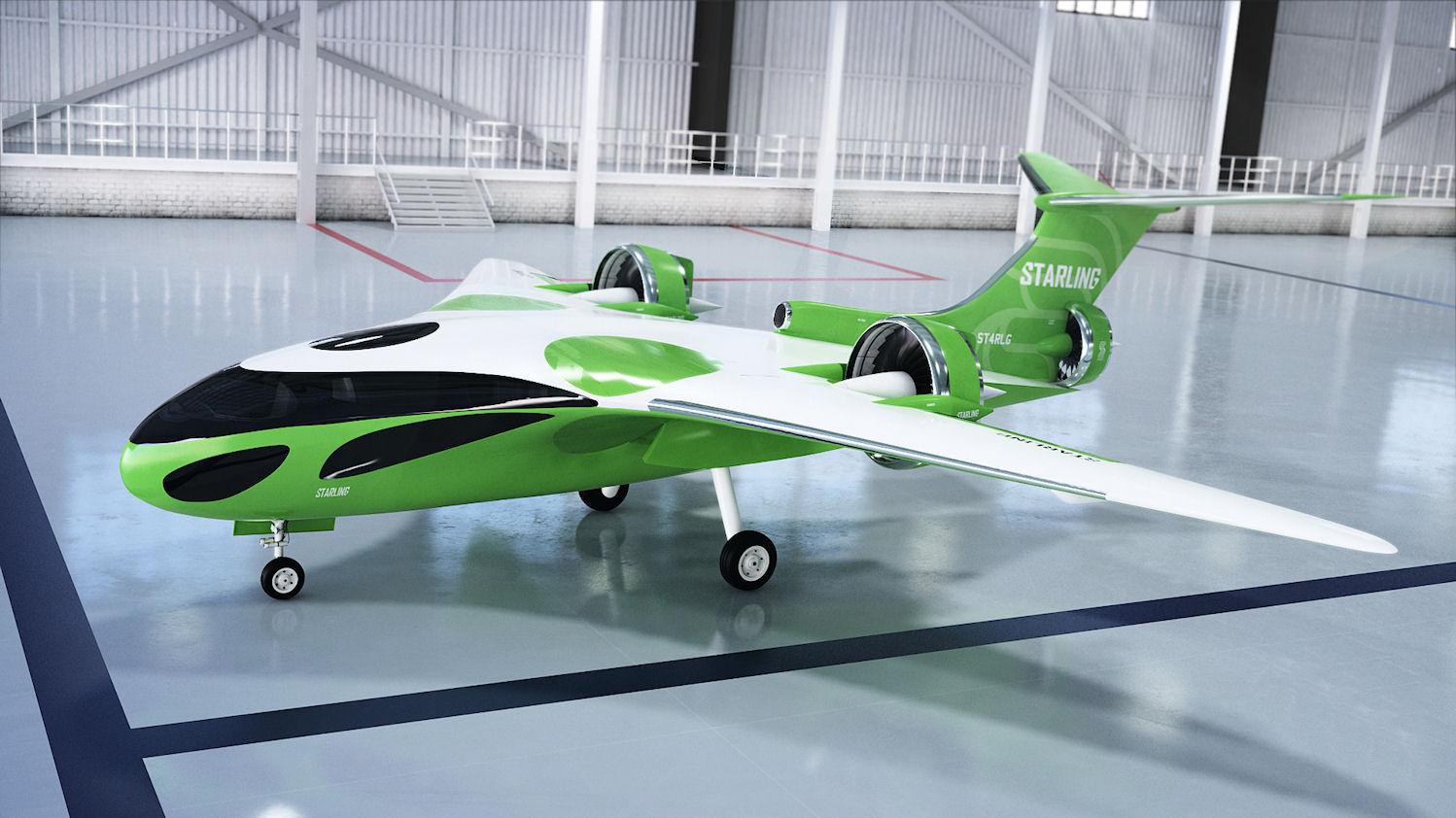 Common to all are vertical-takeoff-and-landing (VTOL) capability, with forward propulsion by two shrouded fans on pylons level with the wing trailing edge; augmented on the Starling Jet by a fan behind the fin. For vertical flight, there are two horizontally mounted fans in the forward wingroots, their thrust supplemented by 90-deg. downward deflection of rear fan thrust.

Tecnam recently confirmed that the first production Traveller is under construction and will be certified and delivered to launch operator, Cape Air, in January. The U.S.-based commuter airline serves 35 destinations across the Northeast, Cape Cod and the Islands, the Midwest, Eastern Montana, Puerto Rico and the Virgin Islands, and last year reaffirmed an order for the first 20 of the eventual 100 it plans to acquire.

The second Traveller prototype was completed late last year, joining the aircraft that first flew in July 2016 from a new, purpose-built factory at Capua, Italy. Although pure-freight and six-person executive versions are among the options, first Traveller sales targets are operators such as Cape Air, which have fleets of aging Part 23 workhorses, such as the Piper PA-31 and Cessna 400-series twins. In the U.S. alone, 1,100 similar aircraft are in passenger service, their average age 45 years.

The Traveller is a $2.2 million, rugged, 10-passenger transport with freight door, cantilever high wing and fixed landing gear, powered by a pair of 375-hp Lycoming TEO-540-C1A flat-sixes, which can run on avgas or mogas. It will cruise at 180 kt. for 450 nm with full passenger load, or 720 nm with eight aboard.

In early 2017, Tongzhou General Aircraft Manufacturing of Nantong, China, announced the launch of a project at Xingdong aerodrome for manufacture of the Polish-designed M&M EM-11C Orka.

The attractive four-seat, utility twin-prop flew in 2003, and only five prototypes were built up to the time that EASA day VFR certification was obtained in April 2011—and the project was then shelved. The “C” version has 160-hp Lycoming IO/LIO-320s driving MTV-12 counter-rotating propellers, 141-kt. maximum speed and a range of 918 nm, plus 45 min. A Chinese production aircraft was to have been built during the first half of this year but appears to have been delayed. 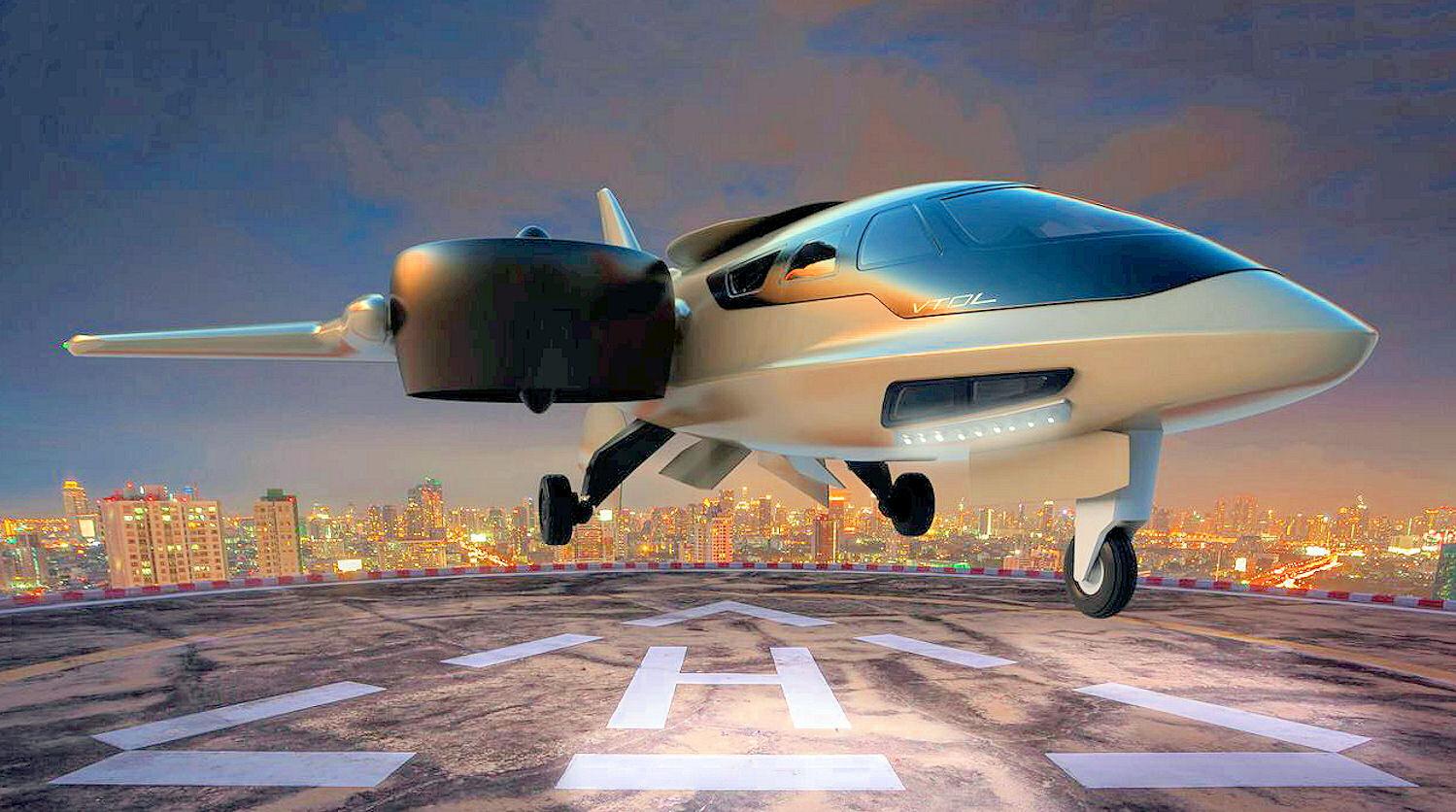 Last month, XTI launched its latest crowdfunding drive and encouraged shareholders with the news that “Our first prototype is almost complete and we’ll begin flight tests within the next few weeks.” Commitments to the $6.5 million TriFan currently stand at 60.

With six seats, the TriFan 600 claims the speed, range and comfort of a luxury business airplane, combined with the capabilities of a helicopter. It will travel at 300 kt., with a range up to 1,045 nm. Fundamentals include three, five-blade ducted fans: two in the wing leading edges, swiveling through 90 deg. between hovering and forward propulsion (when wings provide lift); and one, fixed and thrusting vertically, in the rear fuselage, employed only during takeoff and landing. It will reach 30,000 ft. in just 10 min. and then cruise in airplane mode. Control is fly-by-wire, while carbon fiber and epoxy feature prominently in the structure. Thanks to design inputs from Bye Aerospace, the originally proposed two turboshaft powerplant has been replaced by single turbofan and hybrid electric propulsion.

A further feature, almost unknown in aerospace, is that two years has been trimmed off the original in-production date, which is now quoted as 2022.

In this year’s upbeat prop and turboprop subsection, only the Taihang Angel is deleted by reason of no recent progress, although four more of the listed programs have also not reported any updates. More positively, three more have made progress in the last few months, and a fully fit five are predicting milestone events in the not-too-distant future.