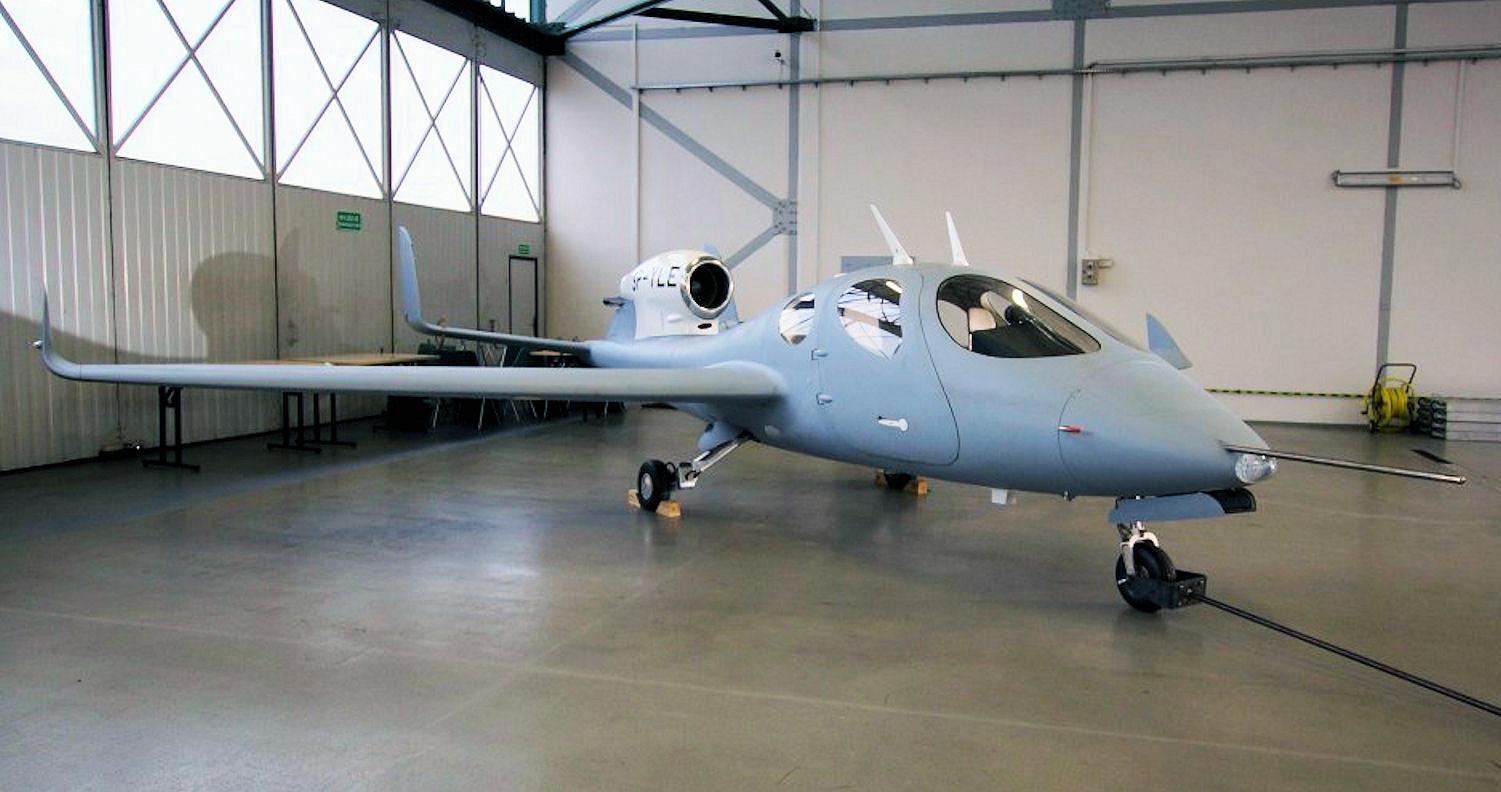 More than a year after its single 1,910-lb.-thrust Williams FJ33-5A turbofan was tested in situ, the LAR1’s maiden fight remains as “imminent” as it was when the prototype (then with 1,460-lb.-thrust PW615F) was unveiled at the June 2013 Paris Air Show. The Polish five-seater will have a range of 1,200 nm, cruising speed of 380 kt. and certified ceiling FL 280. Optimized for the private pilot, the $1.5 million LAR1 features ease of handling; operation from grass airfields of moderate length; automobile-like cabin; wings detachable for economical storage; and a parachute rescue system. First aircraft built are to be in the Experimental category and delivered from 2018, says Flaris; later, European CS23 certification will lead to FAA approval.

Next comes the LAR4 – a 3,500-nm, low-price jet for five passengers, plus crew, of which nothing more is known.

Proving that perseverance brings rewards, the S714 prototype made its public debut in the flying display at AirVenture, Oshkosh, in July, having accumulated some 70 hours of testing since first taken aloft on November 21, 2016, at Roberts Field Airport, Redmond, Oregon. Publicly launched in May 2008, a few weeks before the onset of world recession, the S714 project has marked time on a number of occasions and, though still far from the winning post, is the front-runner in a very small field. Predictably, there is some reticence to announcing a certification target date.

During gestation, there’s been a change of “horses” from the mooted Williams to P&WC: a 2,900-lb.-thrust JT15D-5 in the prototype; PW535 of 3,400-lb.-thrust in certified aircraft. Preliminary results confirm that the five/six-seater will carry max-pax more than 1,200 nm, or four more than 1,500 nm, both at 400 kt. and cruising up to FL 410. Landing speeds and distance requirements for the 714 are considerably below twin-jets, making many more airports accessible to Stratos owner/pilots, while side-stick control, Garmin G3X Touch EFIS cockpit, docile handling and fully integrated autopilot lighten the workload. 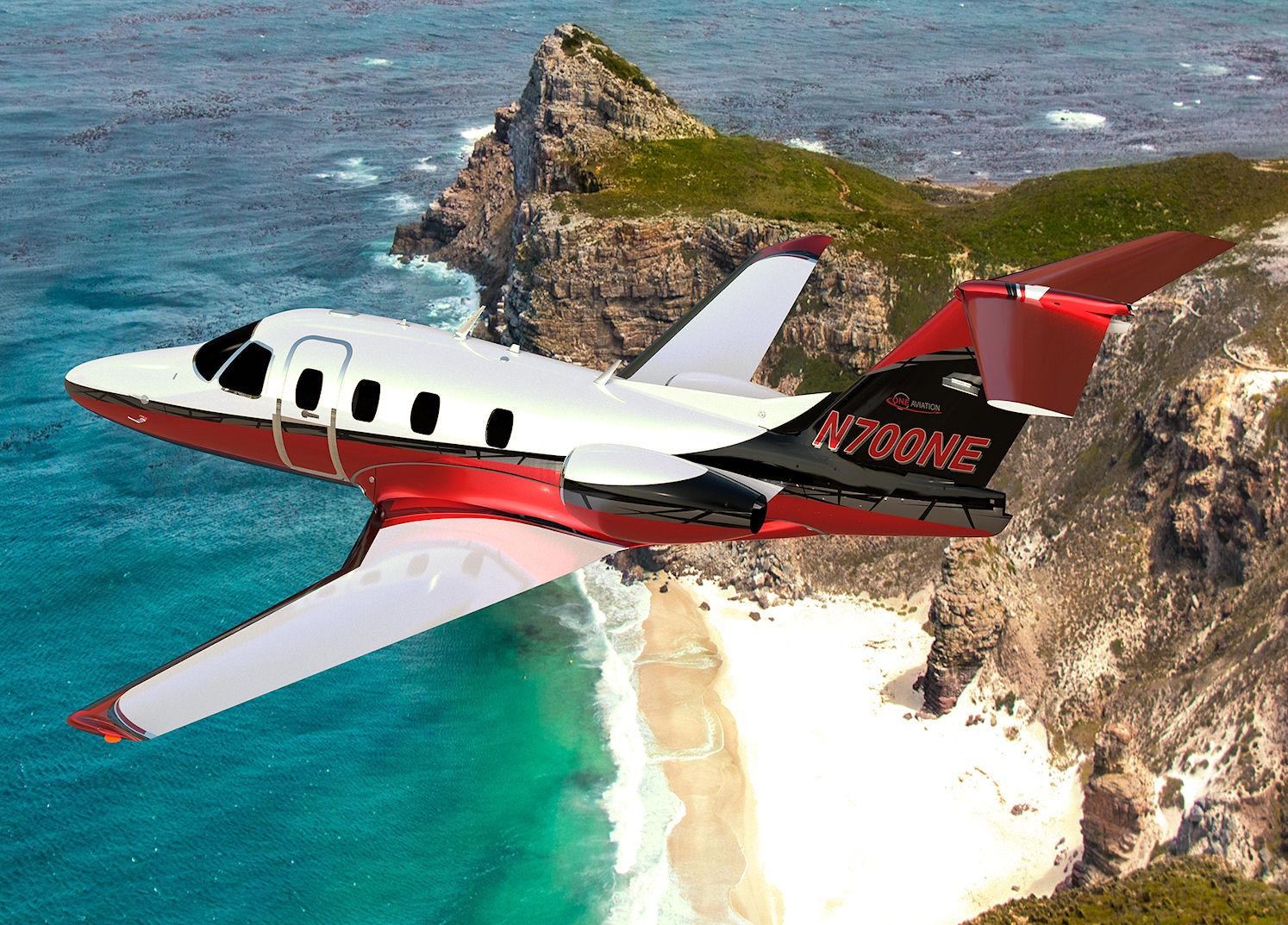 One suspects that this is how the EA500/550 would have turned out were One Aviation’s CEO, Alan Klapmeier, to have had a say in the matter from the outset. Announced in July 2016, “Project Canada” changes include increase in wing span, with a new section near the root for increased fuel, permitting deletion of wingtip tanks; a larger empennage; and, for the occupants, a 14-in. fuselage stretch, providing 10% more cabin volume and a 31% increase in baggage volume, with a fourth cabin window in the baggage compartment.

Maximum seating is six, or four in the executive version, propelled by a pair of 1,800 lb.-thrust Williams FJ33-5A-12 turbofans, with three-screen Garmin G3000 avionics up-front – or the EA550’s IS&S kit as an alternative. NBAA IFR range is 825 nm with all seats full; stretching to 1,517 nm for pilot-only ferry. First flight is due next year, although the new wing has been in the air since September 1, fitted to a testbed EA500. Production of EA550s has been run down in anticipation of the $3.6 million jet being in production by 2019, complete with a new Part 23 Type Certificate.

Farewell, Cirrus Vision SF50 – this review’s friend of considerable long standing, which has finally slipped the surly bonds of the FAA with the award of its Type Certificate on October 28, 2016. Like the poor, the LAR1 seems destined always to be with us, while the Stratos has made a major leap forward since the last NBAA Convention. Surging forward in the field is a strong contender for early production, Eclipse’s Project Canada.