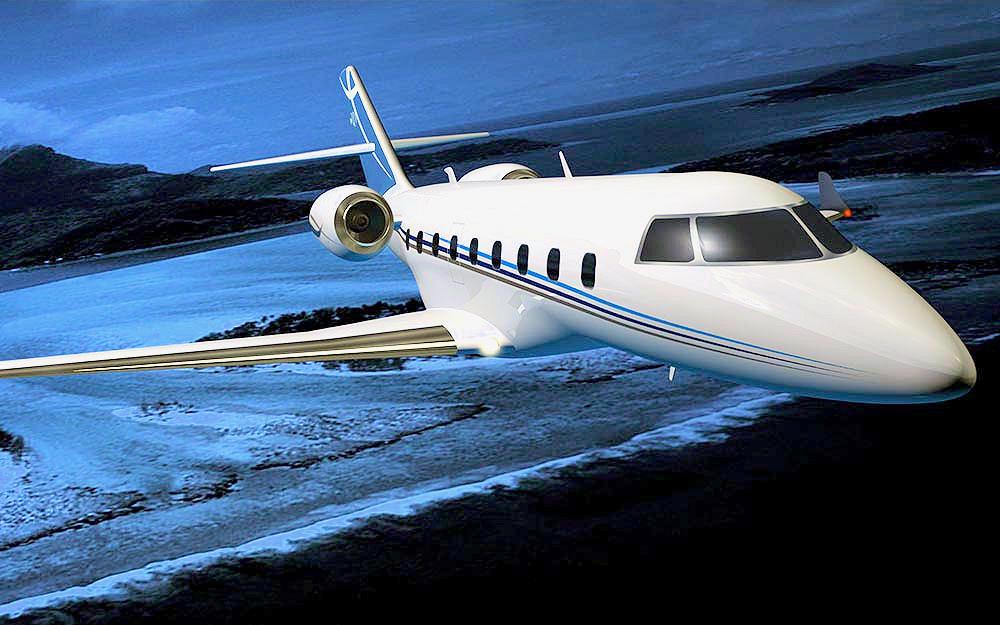 China’s 611 Design Institute of the Chengdu No. 132 Aircraft Factory has been working on the CBJ800 since at least 2012. The original plan called for China to participate in joint manufacture of a Western business jet before proceeding to indigenous design. In the absence of any known offer by a potential partner, it remains to be seen whether Beijing is prepared to omit this step and make the great leap forward to having its own bizjet in production by the target date of 2020. 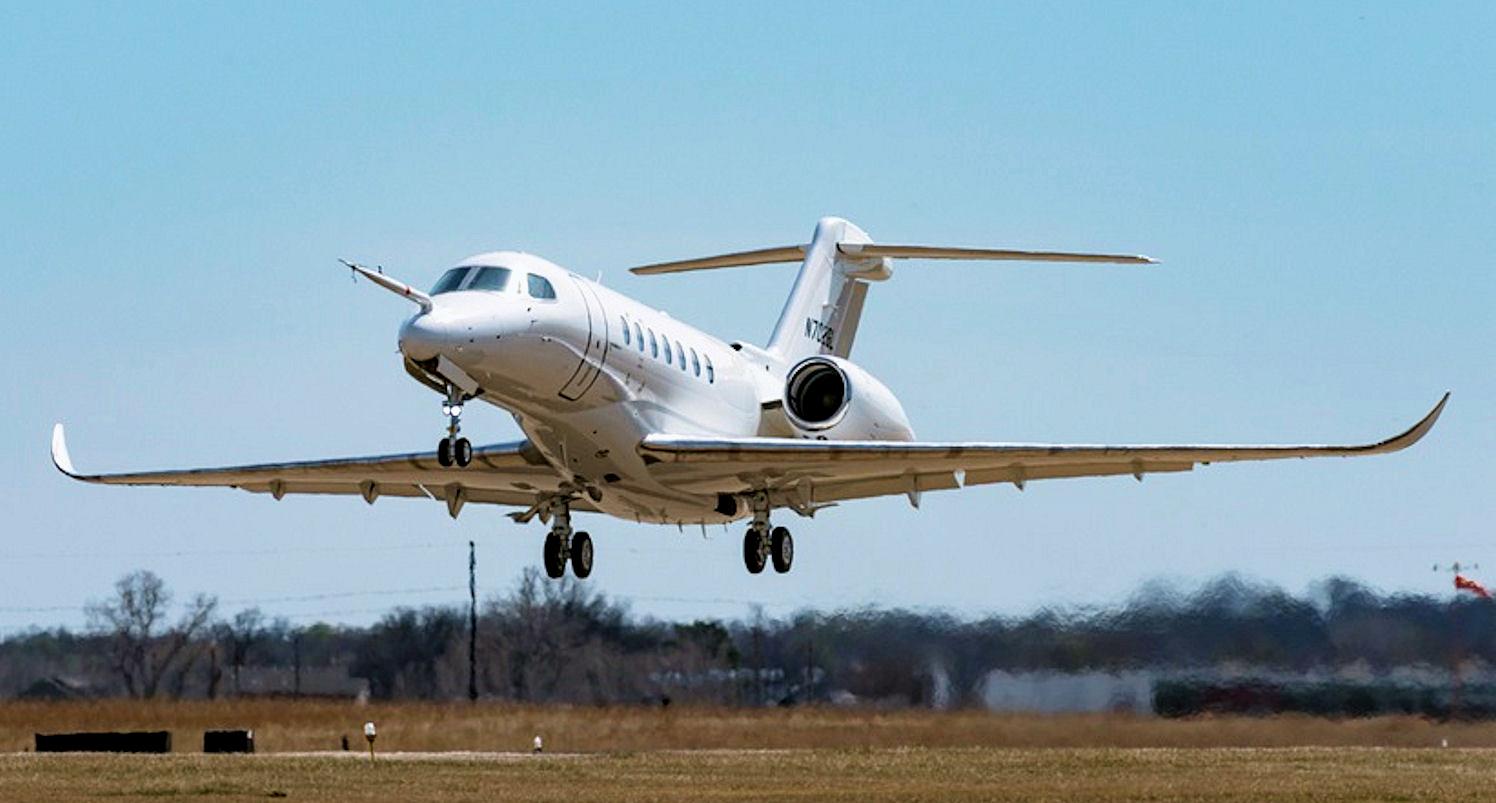 The Longitude development team has been working flat-out this past 12 months to ready the $24 million aircraft for award of FAA certification before the year’s end. Flown on October 8, 2016, the prototype appeared at last year’s convention, still in primer, but by May 6, four were flying in the test program. Later in May, No. 4 made its debut at EBACE, Geneva, reminding Europeans that EASA certification is due in 2018. By June, Cessna had rolled out the first production airplanes from Plant IV at Wichita.

Two 7,600-lb.-thrust Honeywell HTF7700Ls bestow a cruising speed of 476 kt. and a range of 3,500 nm, with four passengers and the usual reserves. Eight is the more normal passenger plan; 12 an absolute maximum; while Part 135 operations with nine will be permissible. Full-fuel payload is 1,600 lb.

External appearance and controls are typical Citation, except for fly-by-wire rudder and roll spoilers, fully automated autothrottles and Garmin G5000 avionics with synthetic vision as standard. 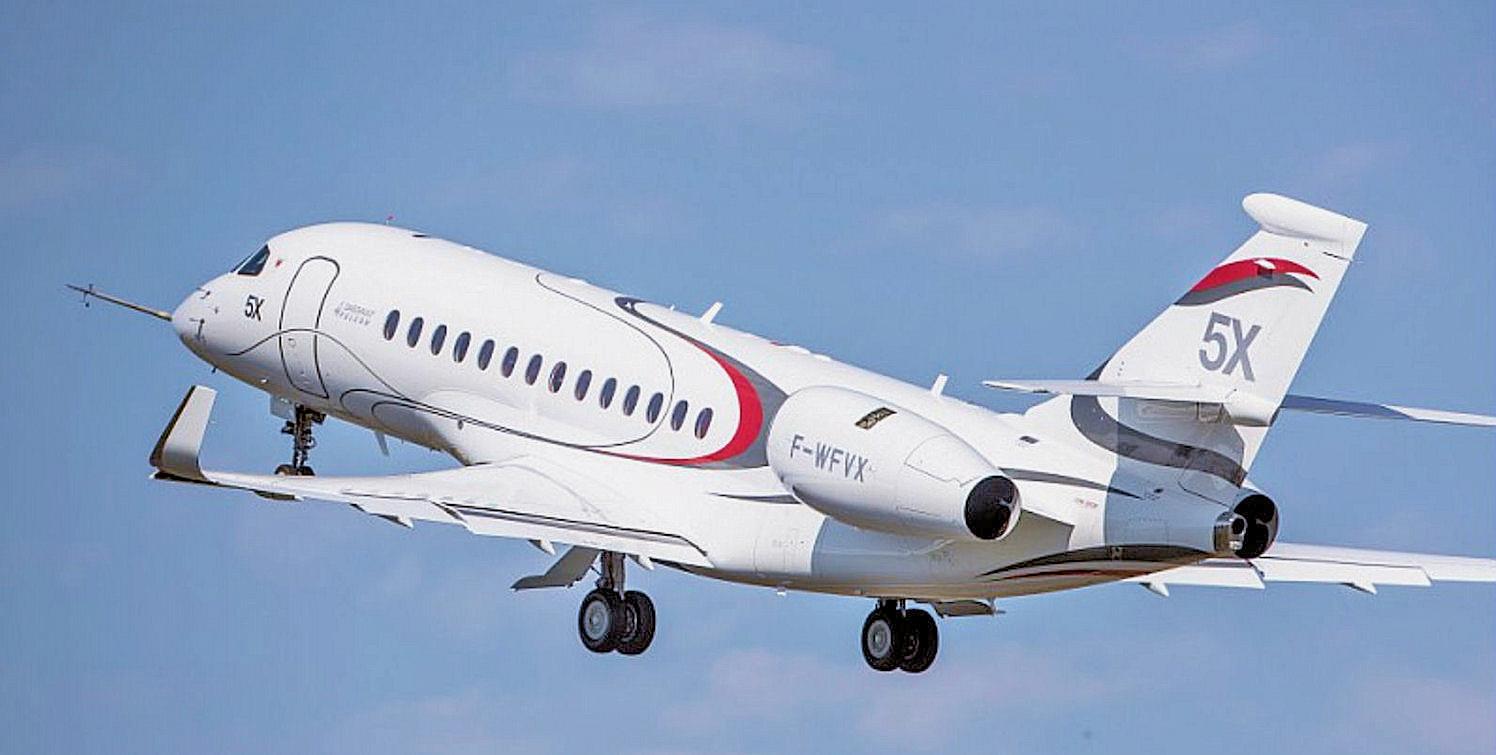 A maiden flight on July 5 was a considerable relief to both Dassault and Safran-Snecma, maker of the 11,450-lb.-thrust Silvercrest turbofans, whose problems had kept the prototype grounded since its rollout in June 2015. The aircraft is now undertaking a preliminary flight test campaign, and is not expected to begin full certification flights until next year. Three prototypes will fly a 20-month program of 1,500 hours in 500 sorties, plus 200 hours of additional reliability testing, pushing service entry into the first half of 2020.

Hailed as the “largest and most advanced Falcon Jet,” the 5X will provide new levels of operating efficiency, carrying up to 16 passengers and three crew in an 8-ft., 6-in.-wide, 6-ft., 6 in.-high cabin at cruising speeds up to Mach 0.85. Estimated range with eight passengers is 4,750 nm, lengthening to 5,200 nm at Mach 0.80. The $45 million (2013) price includes a third-generation Honeywell-Dassault EASy cockpit, including HUD; inflight engine health monitoring; and other advanced technologies. Marketing features include the short-field capability of much smaller jets; FL 510 ceiling; and 50% more efficiency than predecessors on short missions. 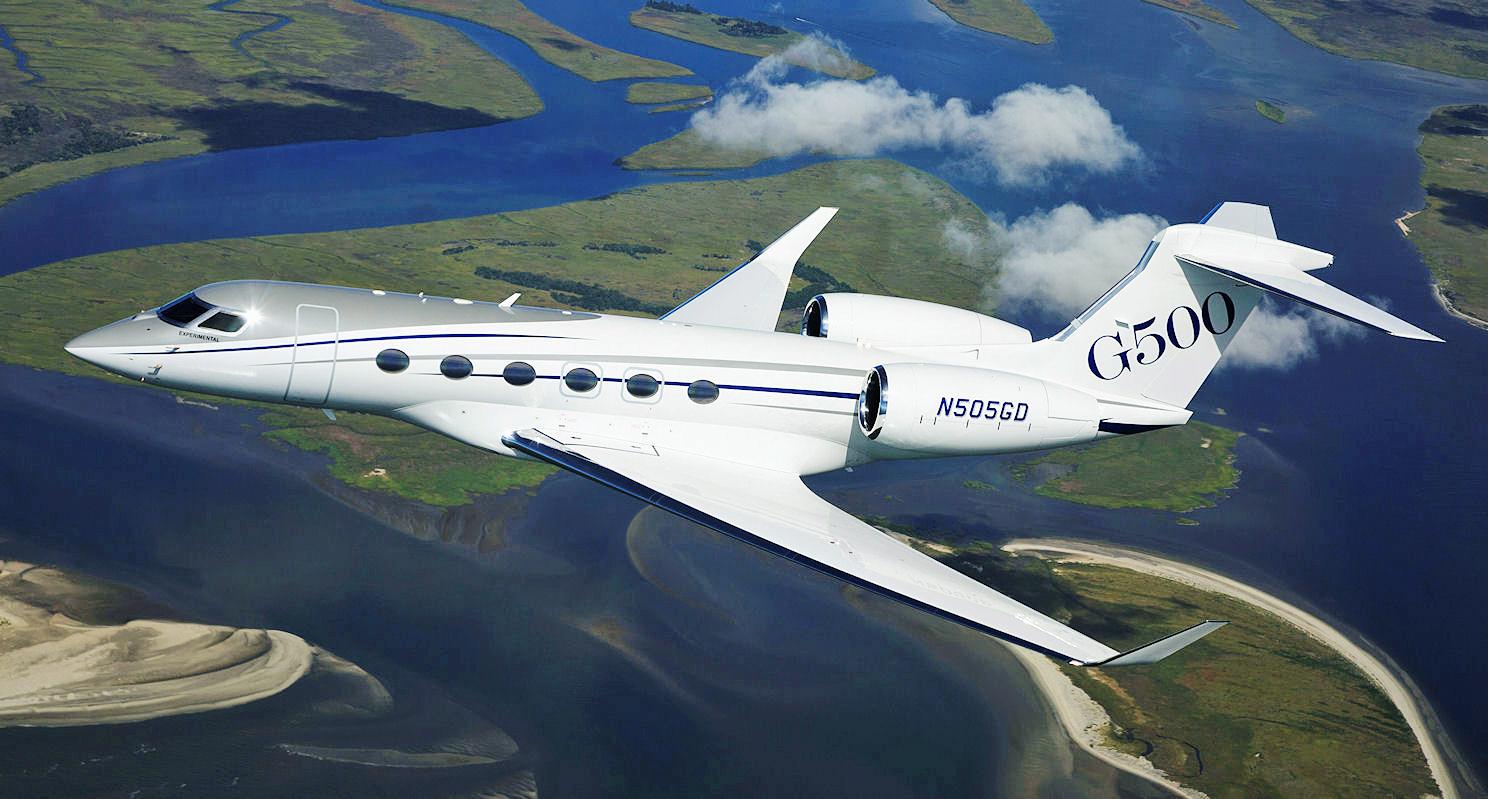 Gulfstream entered the final quarter of 2017 with the G500 coasting toward imminent FAA certification and five G600s hard at work on repeating the exercise this time next year. It was only well after last year’s Convention – on December 19, 2016, to be exact – that the G600 first put daylight under its wheels; yet by the end of August, five of the type were in the air, the last of them a fully outfitted example to check out the cabin equipment. The effort mirrors that for the G500, which put up five aircraft between May 2015 and August 2016. 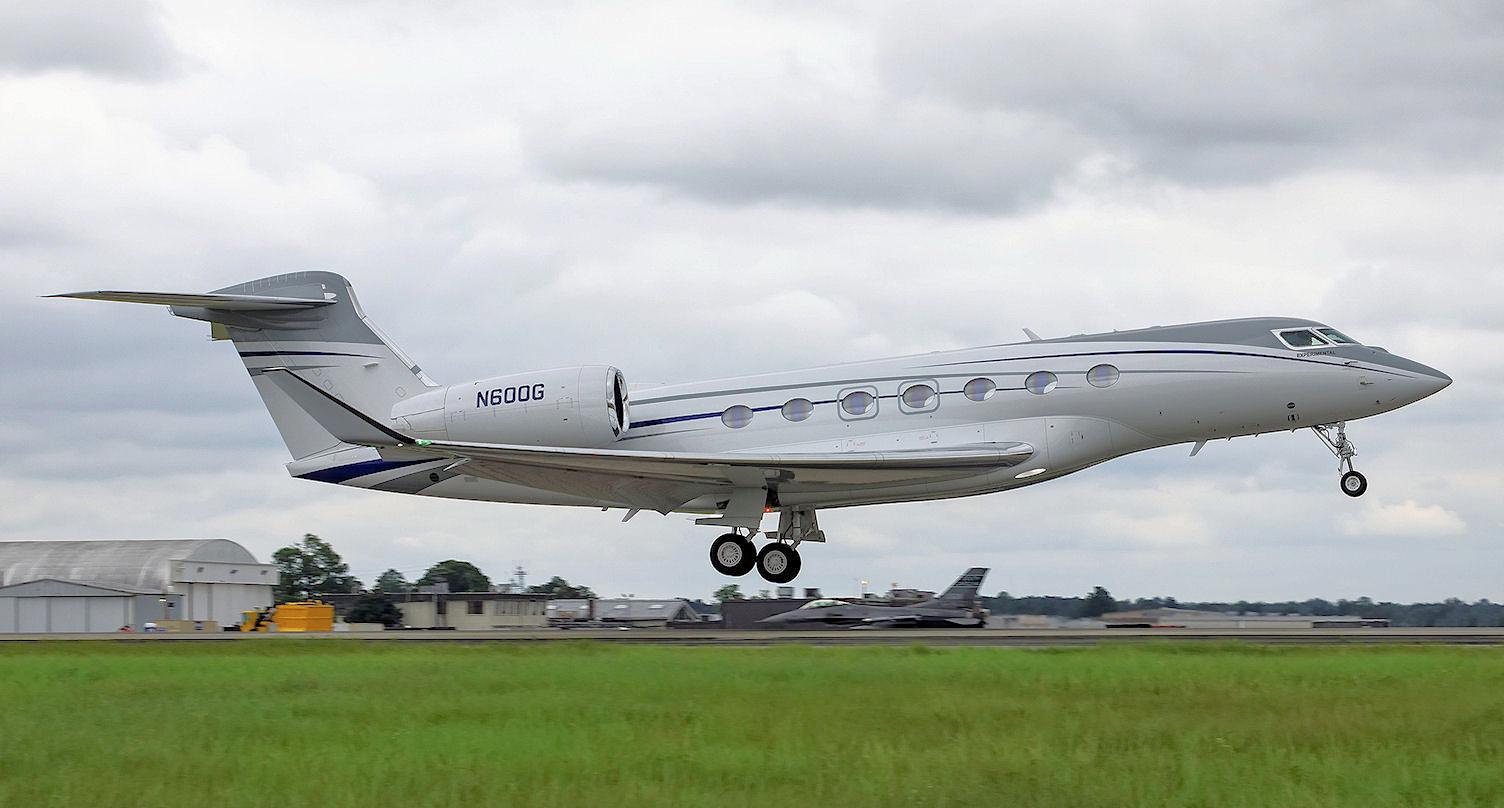 At Geneva’s EBACE, on May 21, Bombardier’s Challenger 604 was named next for the “Nextant treatment.” On offer is a series of upgrades, starting with Pro Line Fusion avionics via an STC, in cooperation with Rockwell Collins (for engineering). Work is undertaken at Nextant Constant Aviation authorized service facilities and at Bombardier service centers. The “prototype” is being modified at Cuyahoga County Airport at Cleveland, Ohio, by Nextant, and is targeted for certification in June 2018. Cost is a few cents short of $600,000, with the important proviso that customers supply their own time-worn Challenger 604.

Cabin upgrades will come later, including a new management system and increased connectivity.

Most of the positive bizav activity is in this sector, with the only question mark hanging over China’s ambitions and intentions. Sole newcomer is from Nextant, albeit a refurbishment, rather than a revelation. But is there room, by 2023, for the rumored Gulfstream G400NG and Bombardier Challenger 700?