New Aircraft At The Farnborough Airshow 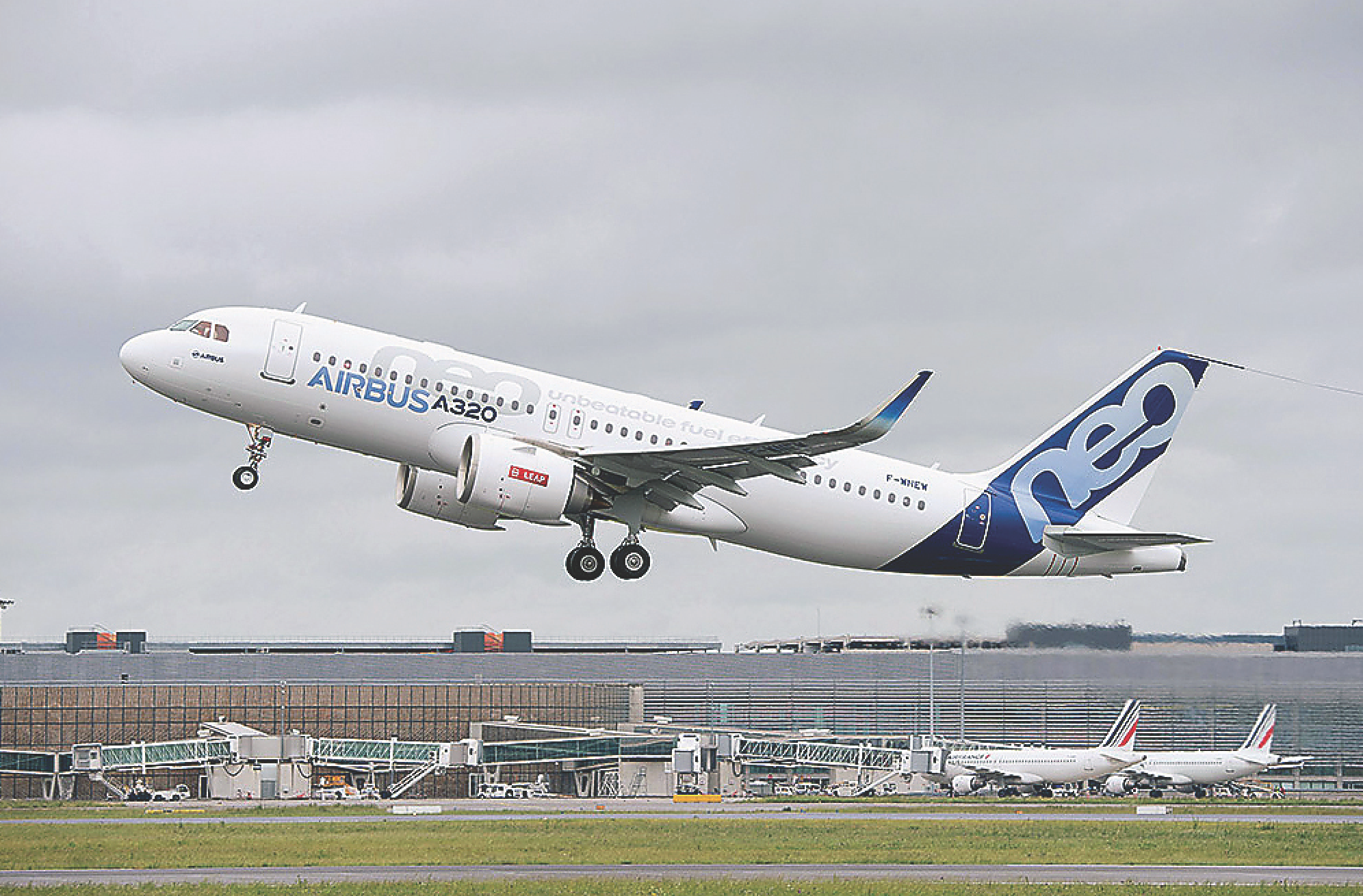 Although not on static display here at Farnborough, both versions of the re-engined Airbus A320neo are expected to perform a flypast – possibly on July 12. Offered with a choice of the CFM Leap-1A or Pratt & Whitney's PW1100G geared turbofan, the three variants of the neo family are designed to succeed the A319, A320 and A321. With almost 4,600 on firm order, the A320neo family is the fastest-selling airliner ever developed by Airbus. Initial deliveries of the PW1100G-powered A320neo began in January 2016, with first delivery of the Leap-1A version expected to start within weeks. 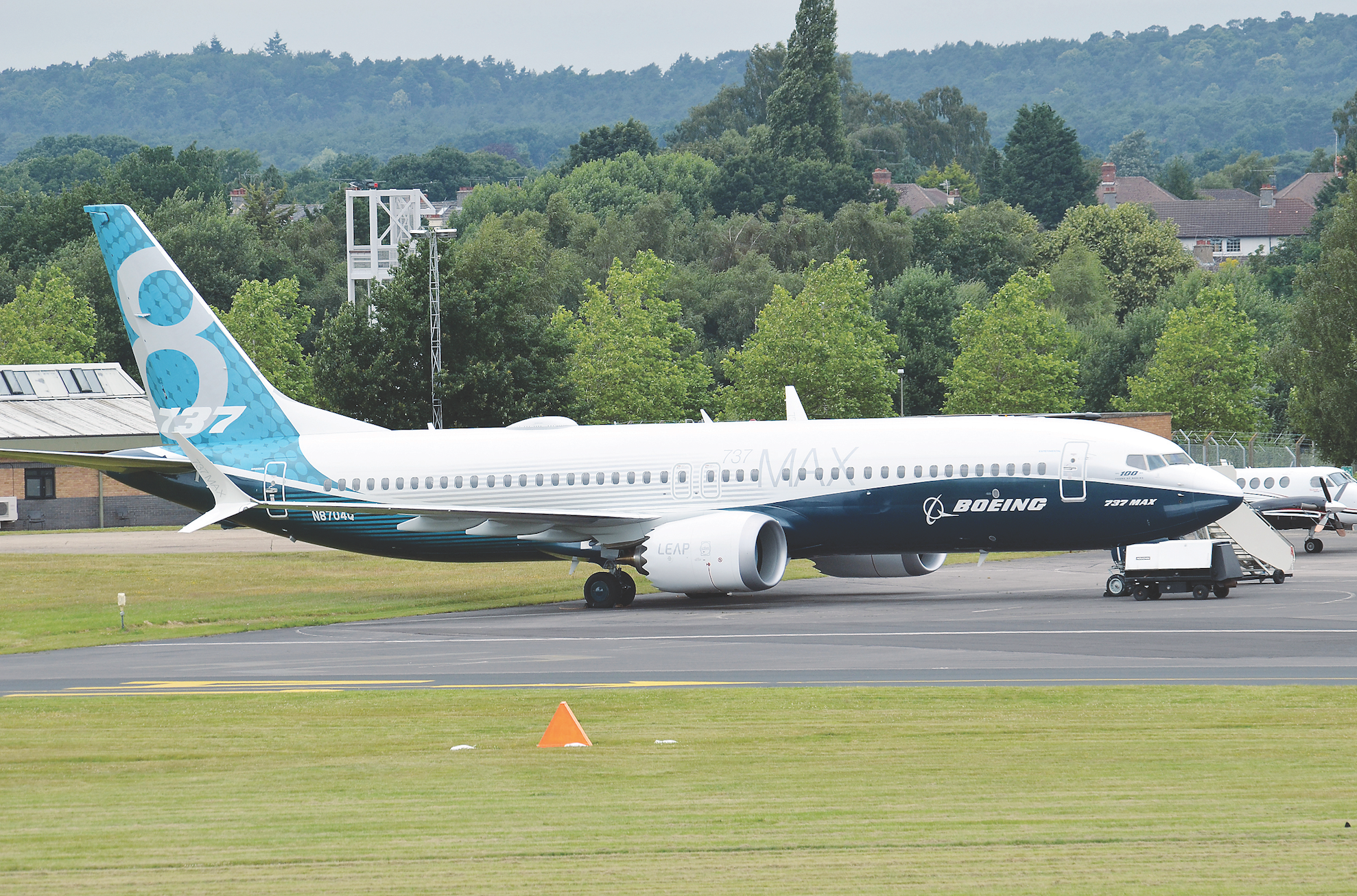 Distinguished by its larger CFM LEAP-1B engines and split winglets, Boeing’s 737 MAX is here at the show for the first time. The aircraft on display is the 737-8 variant, the first of three major family derivatives designed to succeed the 737

Next Generation. Boeing, which has firm orders for more than 3,200 MAX, is on track to obtain type certification of the 737-8 in the first quarter of 2017. The company is also expected to bolster its portfolio by launching the 737-7X, a significantly redesigned variant of the 737-7. Studies are also under way of a stretched 737-9 version dubbed the 737-10X. 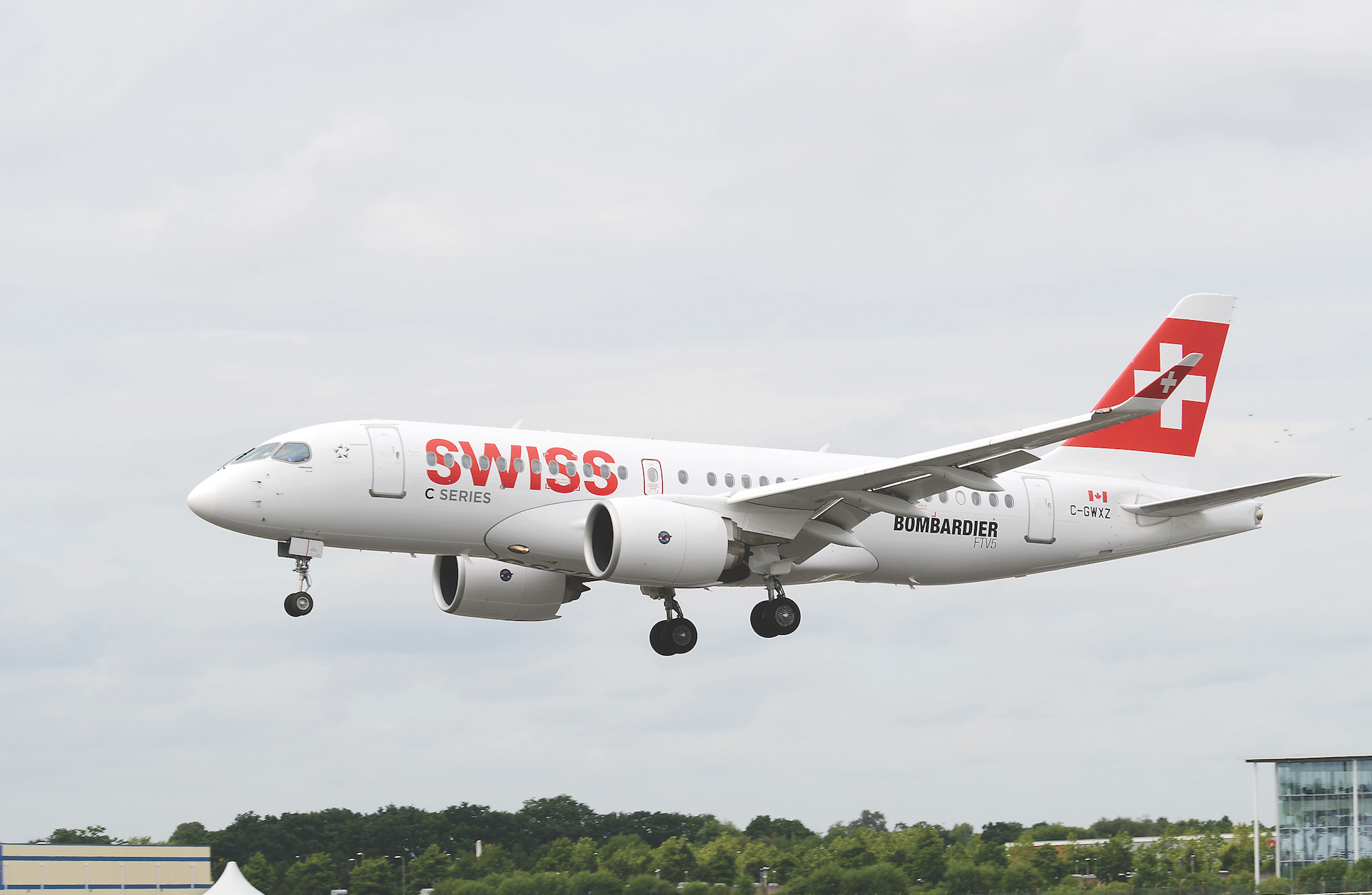 Bombardier’s strategy in its high-stakes poker game seems to be paying off. Delta’s order in April was secured at a price – estimates of the discount offered to the carrier for their firm order of 75 with options for a further 50 range between 50 and 75% of the list price – but should give the program enough momentum to see the Canadian company mount a sustained challenge to Airbus and Boeing. The aircraft here is the fifth prototype, in Swiss Global Air Lines colors: it is not the first aircraft of the Swiss order, which was delivered in June and is due to make its entry into service on Friday. 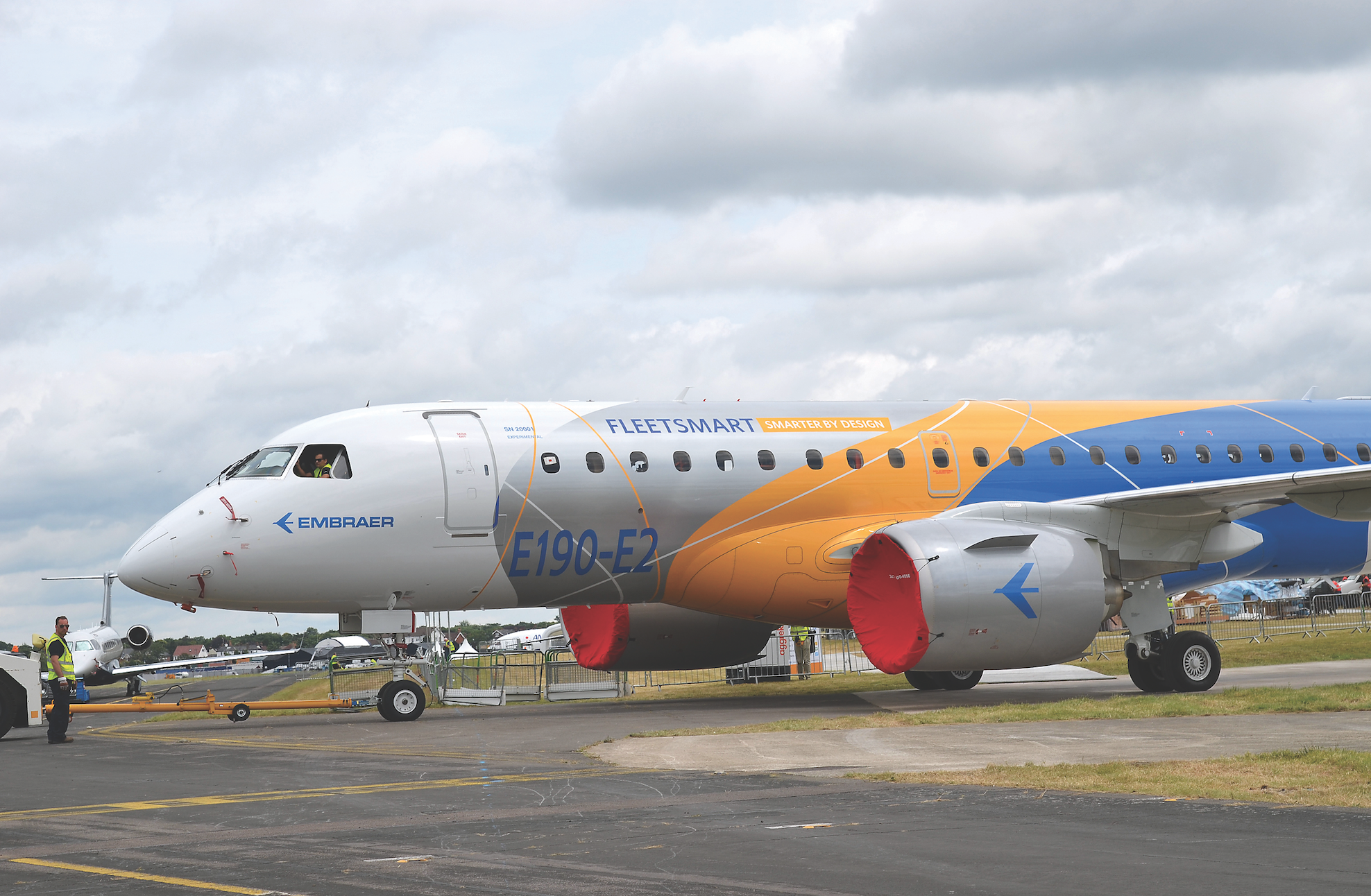 Coming to the show for the first time less than two months after its maiden flight, Embraer’s E190-E2 is the first of three re-engined and re-winged versions of the popular “E-Jet” series to be developed by the Brazilian manufacturer. The E190-E2, along with the next family member, the E195-E2, is powered by Pratt & Whitney’s PW1900G geared turbofan, a version of the C Series engine, while the E175-E2, the third variant, will be equipped with the smaller PW1700G derived from the Mitsubishi MRJ’s PW1200G. Entry into service of the E190-E2 is expected in 2018, while the E195-E2 and E175-E2 are expected to debut in 2019 and 2020, respectively. 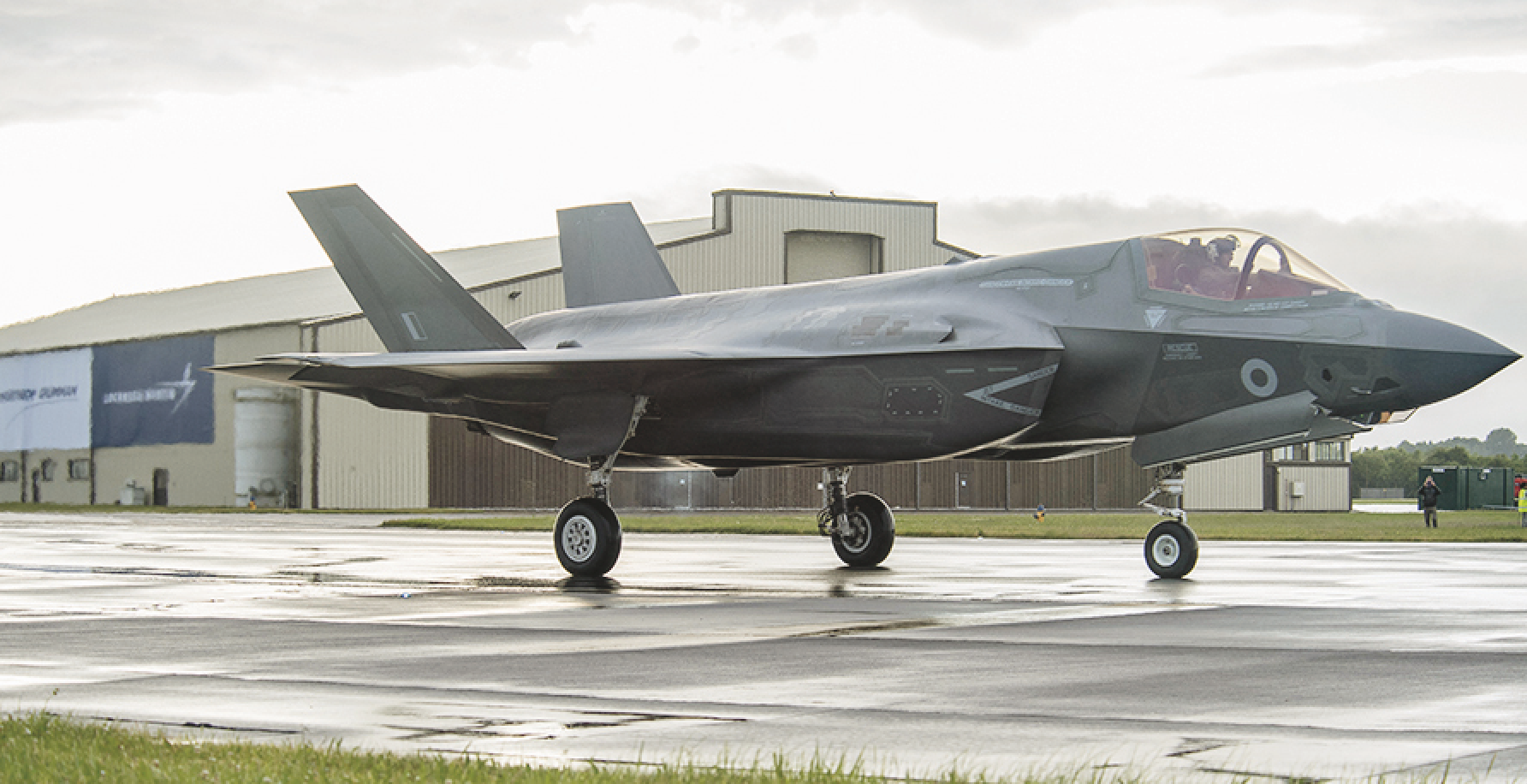 The canceled appearance two years ago will be forgiven and forgotten once the F-35B makes its belated Farnborough debut today. Two F-35As that appeared at the Royal International Air Tattoo will not be displaying at Farnborough, and the visiting B models will not perform a vertical landing: but, if its RIAT appearance last Friday was anything to go by, simply seeing the long-delayed, durably controversial jet flying – and hovering – at the show will be enough to replace the skepticism that has surrounded the program with genuine and palpable excitement. 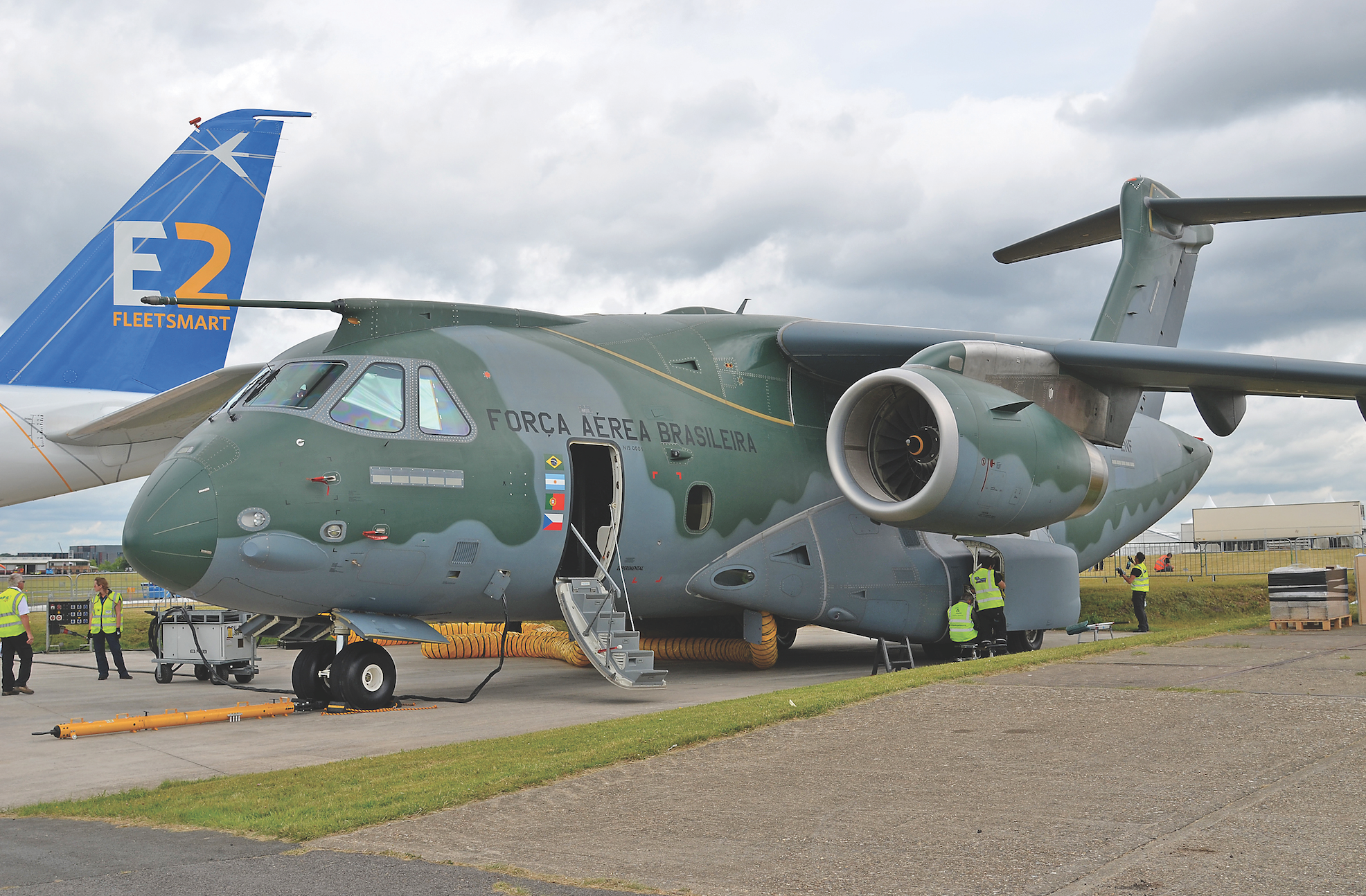 Embraer’s chunky-looking tanker-transport aircraft is making its debut at Farnborough as the first stop on an international sales tour of Europe and the Middle East. The twin-engined, T-tail aircraft has 28 firm orders to date from the Brazilian Air Force and commitments from Argentina, Chile, Colombia, the Czech Republic and Portugal to buy an additional 32. Powered by International Aero Engines V2500s, the two KC-390 test aircraft have so far amassed 360 flight hours and are targeted at certification in 2017, with deliveries beginning early in 2018 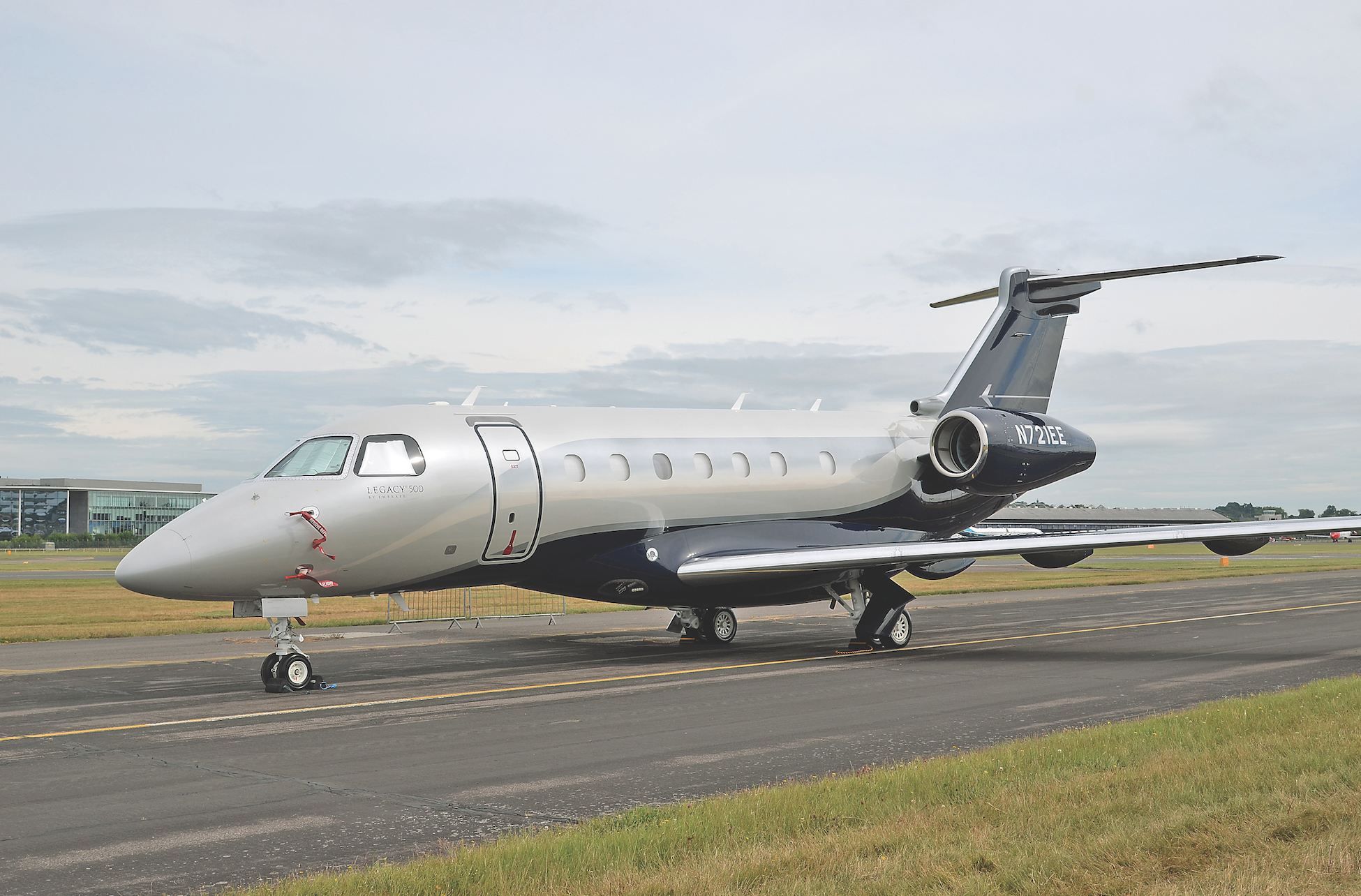 On May 19, Flexjet’s Embraer Legacy 500 became the latest aircraft approved to use London City Airport, after demonstrating compliance with the airport’s demanding 5.5-degree approach and exacting climb-out procedures. The 500 is the longer of the related Legacy 450/500 pair that complete the broad range of business jets that Embraer committed to developing a decade ago. Two Honeywell HTF7500E turbofans power the eight-/twelve-seat Legacy 500 and give a reach from the U.S. East Coast into London. It differs from its other Brazilian bizjets in having fly-by-wire controls, the development of which resulted in some delay to its marketing timetable. 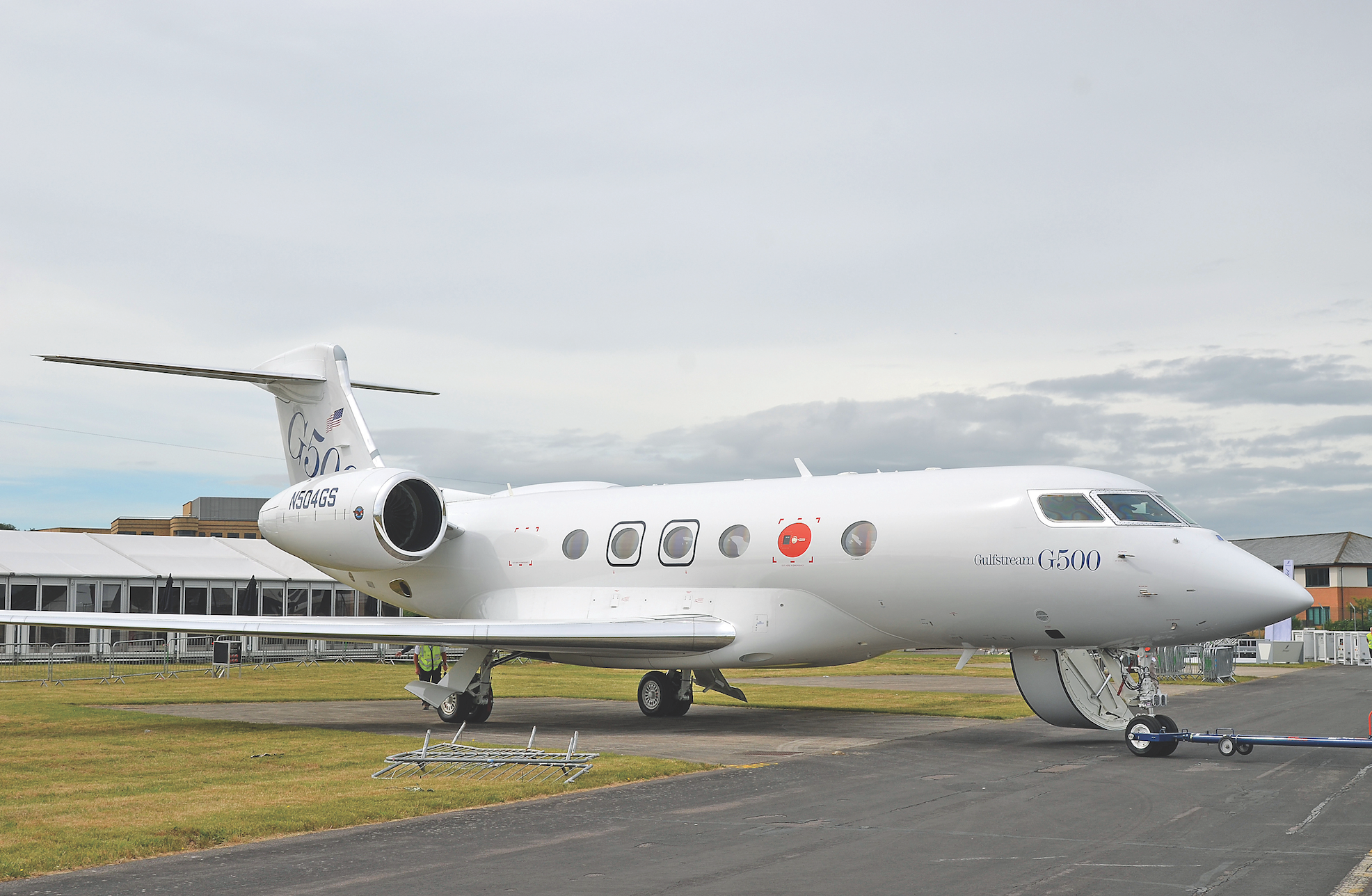 The latest Gulfstream business jet comes in two sizes, of which the shorter G500 is the first to appear. First flown on May 18, 2015, the G500 anticipates FAA and EASA certification next year, and deliveries from 2018. Its G600 stablemate is following 12 to 18 months behind. Two rear-mounted Pratt & Whitney Canada PW800-series turbofans provide the power for this fly-by-wire-controlled 18-seater, the two pilots having BAE Systems active side-stick controllers with tactile feedback for closer crew integration, these being claimed as the first on any business jet. 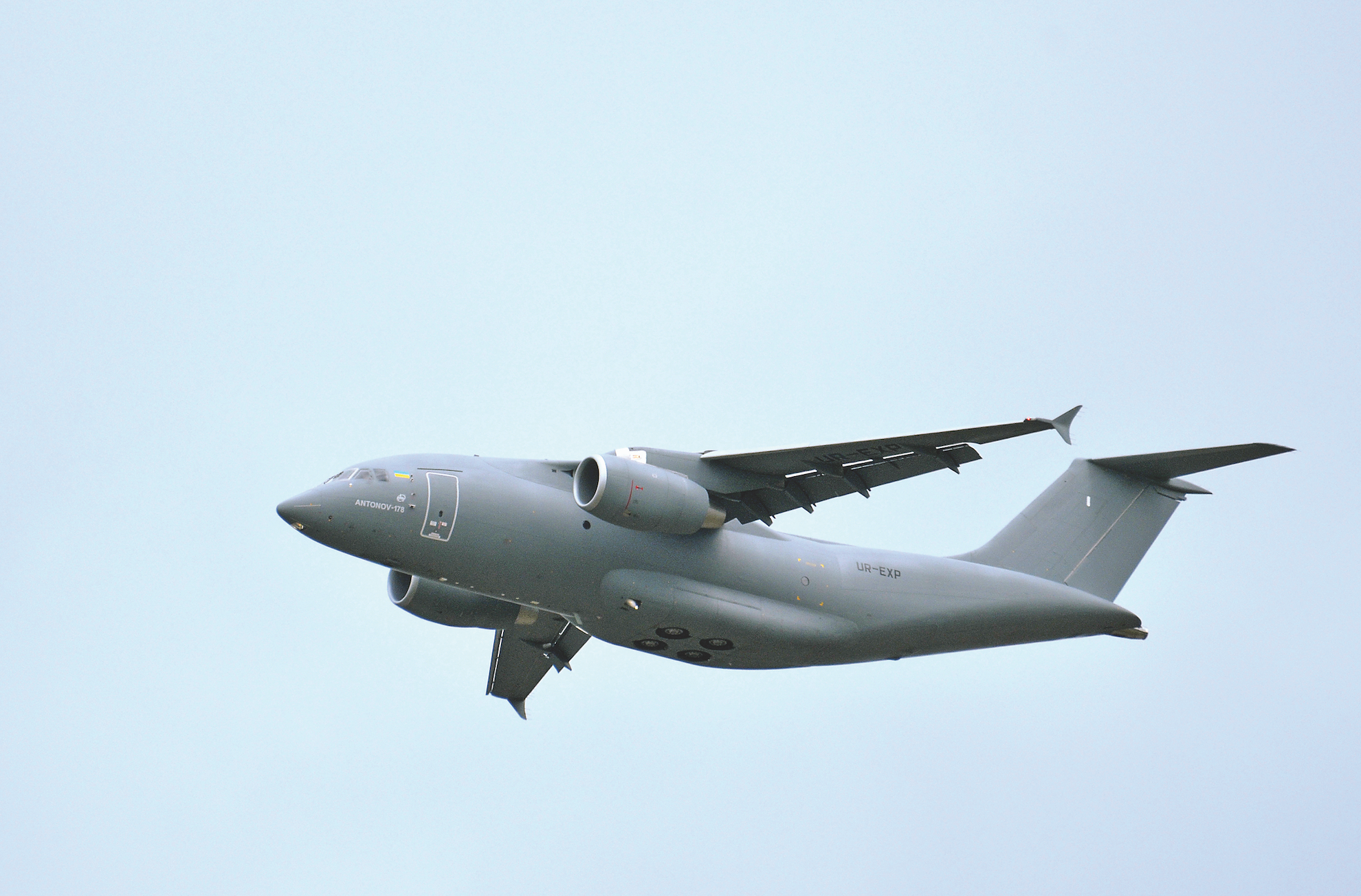 First flown in May 2015, this rear-loading version of the An-148/158 is at Farnborough as part of a campaign of intensive promotion asserting the new independence of Ukrainian aerospace, in which it seeks to become a successor to the widely used An-26 and An-32 turboprops. In military guise, typical payloads include three HMMWV (“Humvee”) vehicles; 72 troops; 68 paratroops; or 40 stretchers plus 30 walking wounded. Antonov has already picked up orders and commitments, the most significant from Taqnia Aeronautics for up to 30 An-178s, should the type be ordered by the Royal Saudi Air Force. 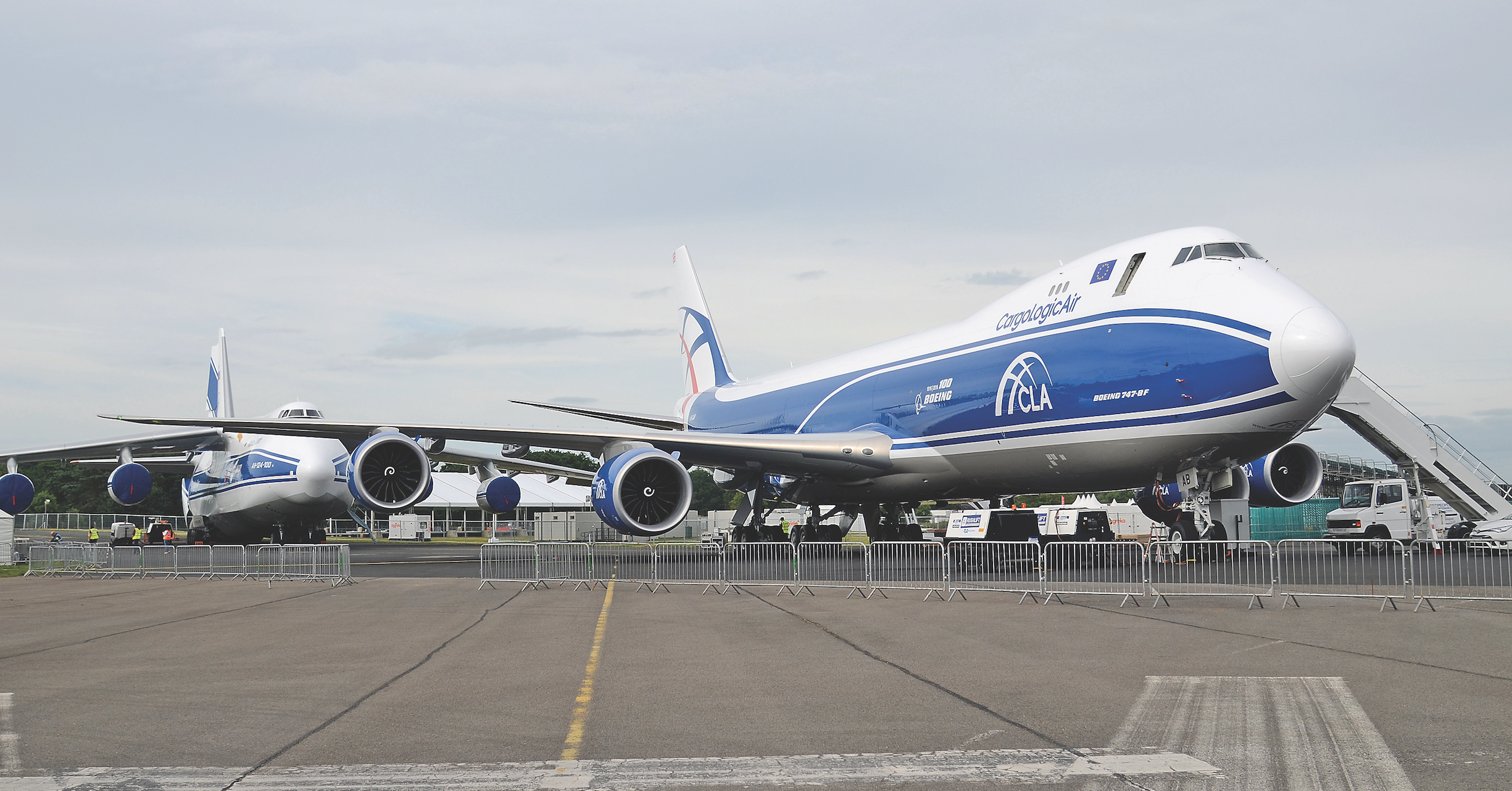 Marking a rare appearance at Farnborough for the iconic 747 family, the 747-8F freighter is here at the show as part of an aggressive Boeing sales campaign for its largest product. Remarkably, other than a one-day appearance of a Qantas Airways 747-400 in 1990, the 747 has never previously featured in the static park. Although slowdowns in both the large passenger and freighter market are forcing Boeing to cut 747-8 production to just six per year from September, the company forecasts a recovery in the cargo market and confidently expects to increase 747 rate to one per month in 2019.

Several new aircraft are making their Farnborough Airshow debut this year, including a flypast by the Lockheed Martin Joint Strike Fighter.