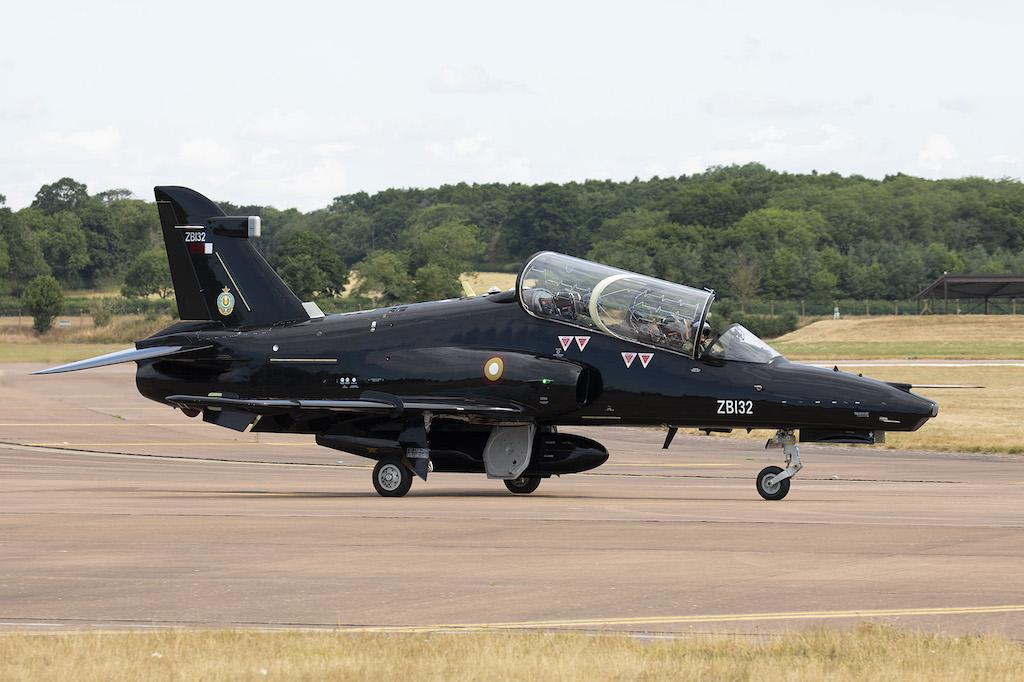 Qatar’s Emiri Air Force made a return visit, but their aircraft did not have to travel far, this was one of nine BAE Hawk jet trainers based in the UK in conjunction with the Royal Air Force to support Qatar’s pilot training needs. The Hawks wear this black color scheme to make the aircraft more distinct when operating at low level. 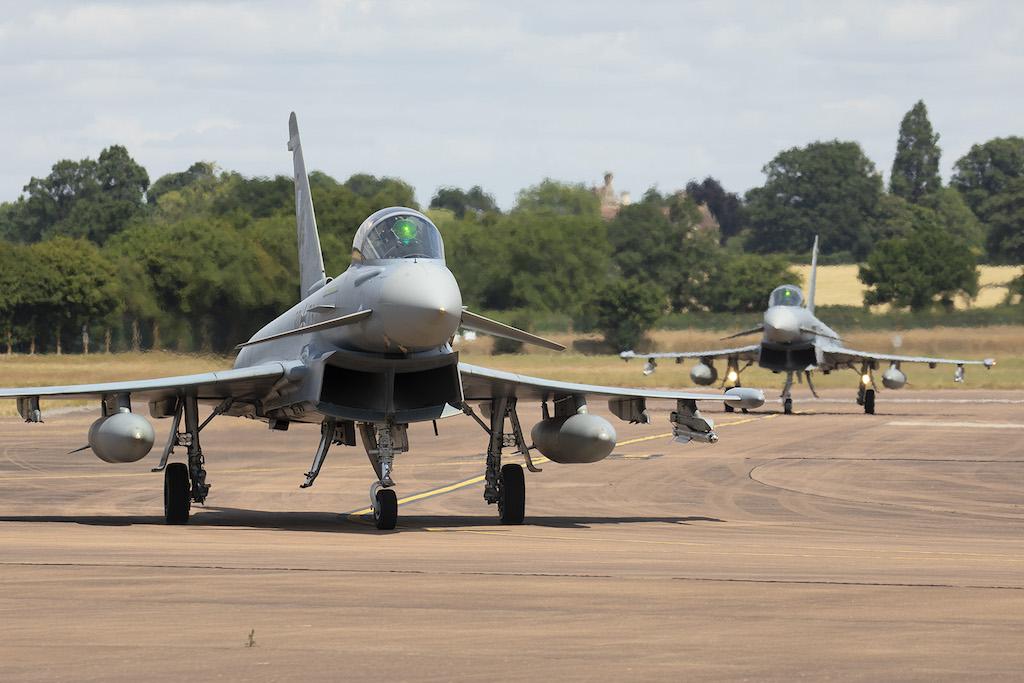 Eurofighters were a common sight on the ground and in the flying display at this year’s Air Tattoo. These two German Air Force [Luftwaffe] Eurofighters, were joined by aircraft operated by Austria, Italy, Kuwait and the UK Royal Air Force. The arrival of the Kuwaiti aircraft, flying in from Italy before its delivery to the Gulf State, marked the first visit by the Kuwaiti Air Force to the Air Tattoo since 1993. 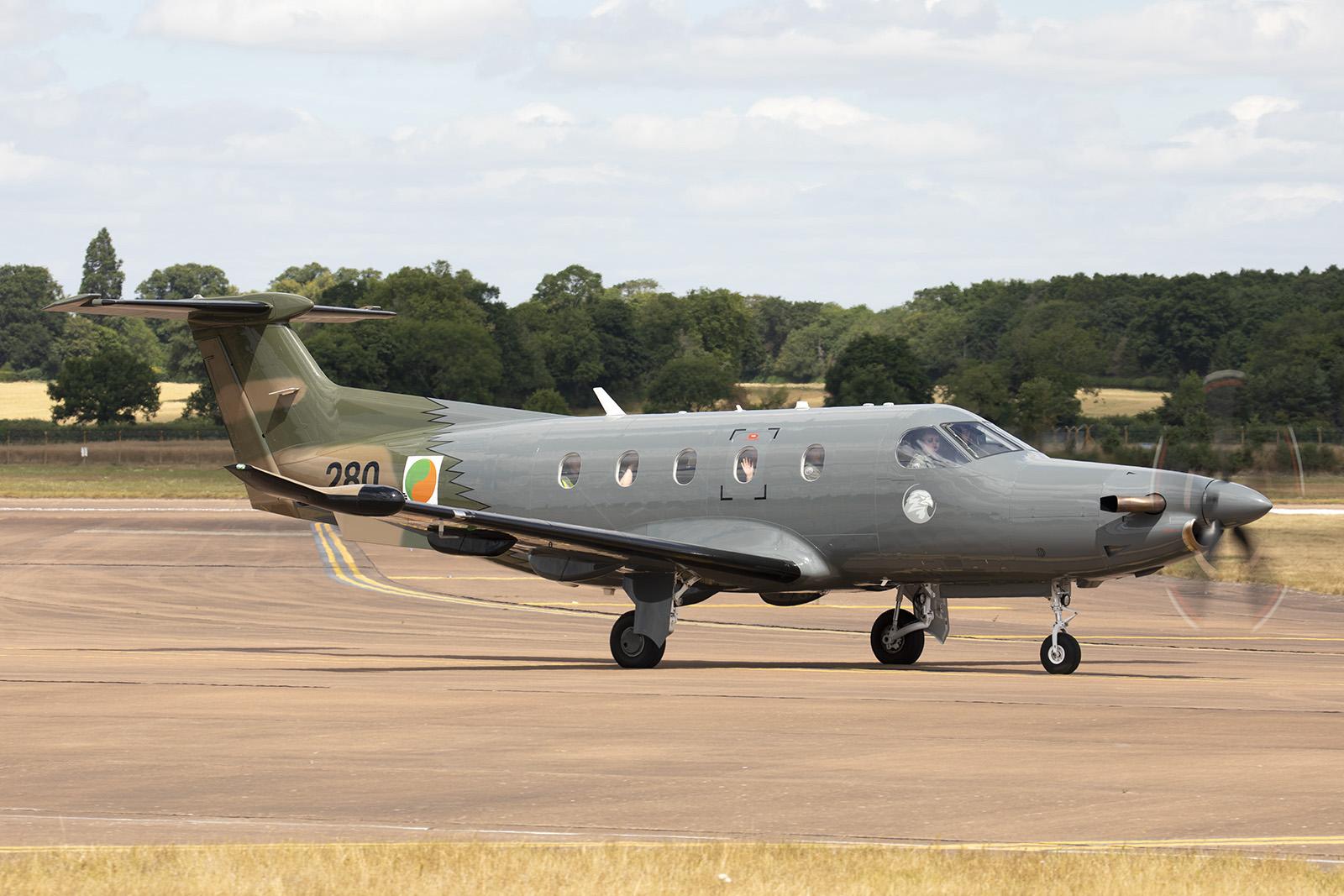 The Irish Air Corps (IAC) was well represented at this year’s Air Tattoo as it marked its 100th anniversary this year. This Pilatus PC-12 Spectre is one of four to have joined the ranks of the Air Corps since early 2020 and is used on transport and intelligence, surveillance, and reconnaissance tasks. The special paint scheme shows the original roundel and camouflage worn by IAC aircraft when it was first formed. 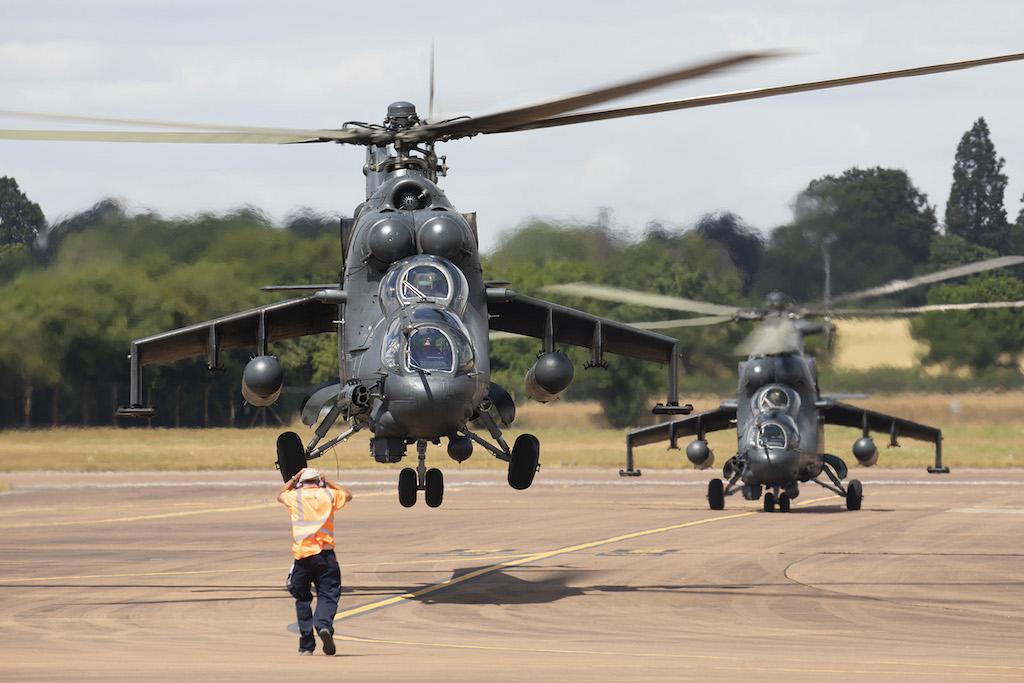 Despite Russian-built aircraft becoming a rare sight in the inventories of Europe’s air forces, the Air Tattoo was able to secure attendance of four helicopters produce by Russia’s Mil design bureau including these two Hungarian Air Force Mi-24 Hind attack helicopters, one of which performed in the air display. The Hungarian Hinds were joined by a third Hind and a Mil Mi-17 transport helicopter from the Czech Air Force. 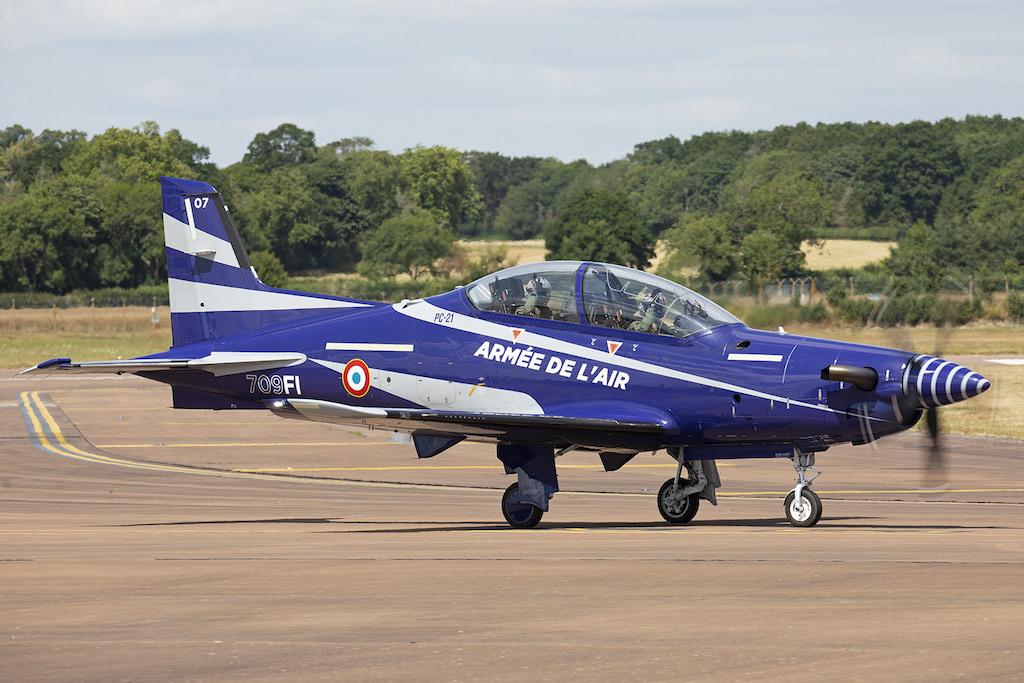 With a theme focused around training, the turboprop trainers of Switzerland’s Pilatus were a common sight on the ground and in the air, among them was a display by France’s newly acquired PC-21 trainers, flying a pairs demonstration team called Mustang X-Ray. Other Pilatus platforms in the flying display came from Ireland, Slovenia and Switzerland. 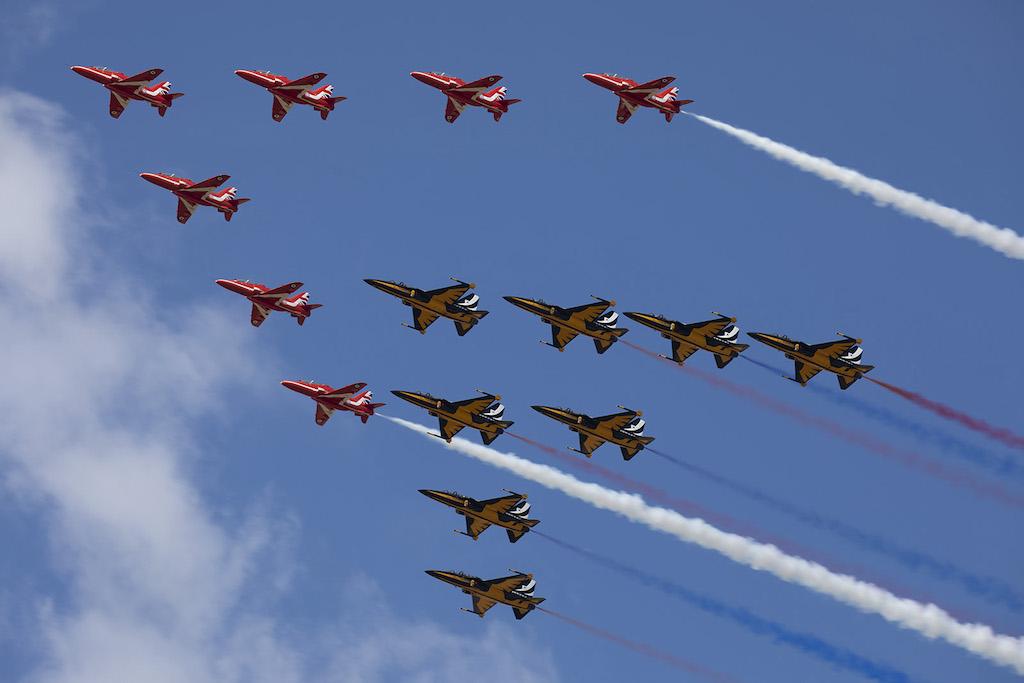 Friendship in the Sky

The Republic of Korea Air Force’s (ROKAF) aerobatic display team returned to Fairford in 2022, 10 years after their debut visit. Having dismantled, flown in 747 freighter and then rebuilt their Korean Aerospace Industries (KAI) T-50 jet trainers, the team performed their aerobatic display each day and also flew in formation with the Royal Air Force’s aerobatic team, the Red Arrows, as seen here. The Black Eagles plan to return to South Korea in the coming weeks after taking in airshows in Eastern Europe and North Africa on the route home. 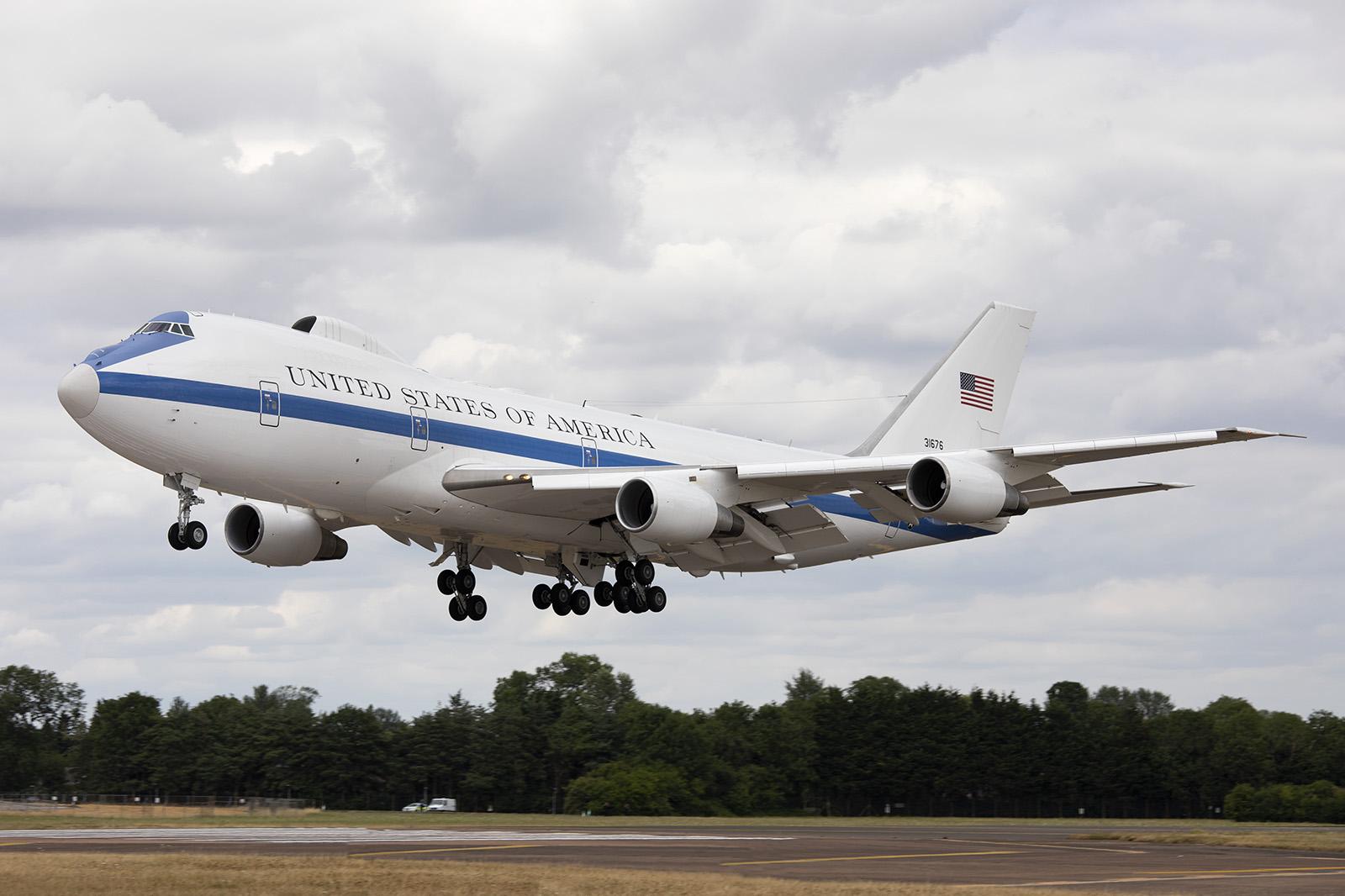 While a relatively common sight in the U.S. the United States Air Force’s Boeing E-4B Nightwatch National Airborne Operations Center, is a much rarer sight in Europe, and even less so at airshows, so its debut at the Air Tattoo was something of a wow moment for many of the crowds when it arrived on the Friday of the airshow. 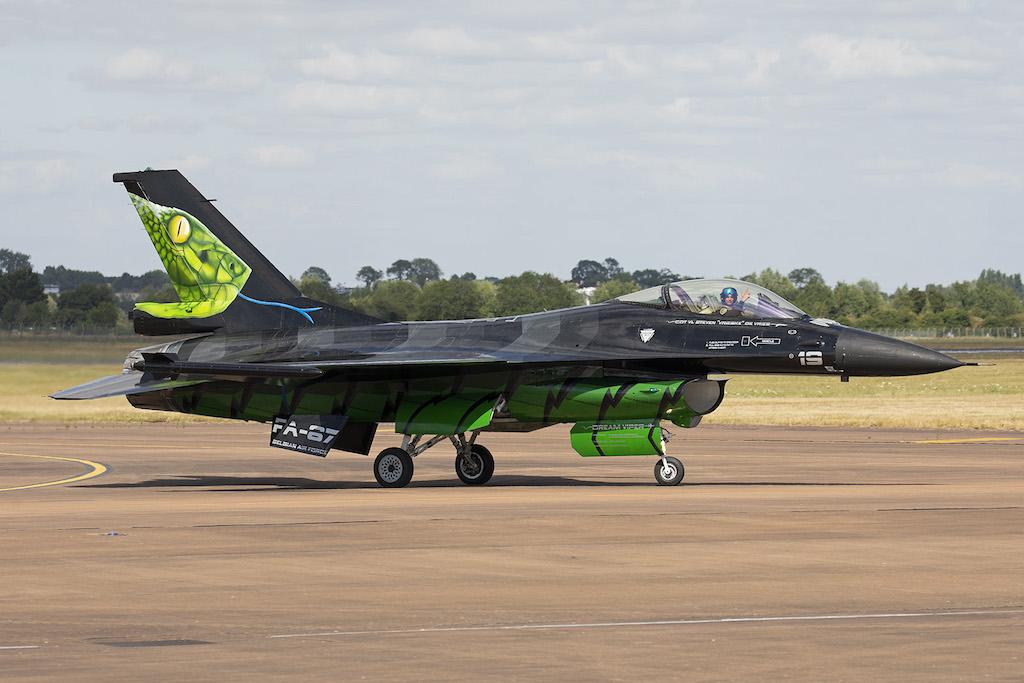 Arguably the most distinctive color scheme at this year’s show was worn by this Belgian Air Force F-16 Fighting Falcon. Flown by the Belgian F-16 Solo Display pilot, Captain Steven “Vrieske” De Vries, who is one of the most experienced F-16 pilots outside the U.S., the scheme is inspired by the reptile after which the aircraft is often nicknamed, the Viper.

The long-anticipated return of the Royal International Air Tattoo (RIAT), held at RAF Fairford on July 15-17 after its two-year COVID-enforced hiatus attracted aircraft from across the world in a show of force by allies and partners.

Some 266 aircraft from 31 countries, including Canada, Kuwait, Japan, South Korea, made transcontinental and oceanic journeys to reach the show. Among those countries was Bahrain which became the 57th nation to attend the event since the first show in 1971. Aviation Week’s London Bureau Chief Tony Osborne attended the arrivals day on July 14.

Keep up to date with all the news from the 2022 Farnborough Air Show.