Farnborough Air Show Through The Years

In 1959, the Vickers Vanguard G-APEB was flown at the 20th Society of British Aircraft Constructors Flying Display and Exhibition. Although the commercial Vickers Vanguard had limited success, Farnborough continues to offer many flying displays. This year an Airbus A380, Boeing 727-200, F-35 and F/A-18E/F Super Hornet will be featured, among other aircraft. 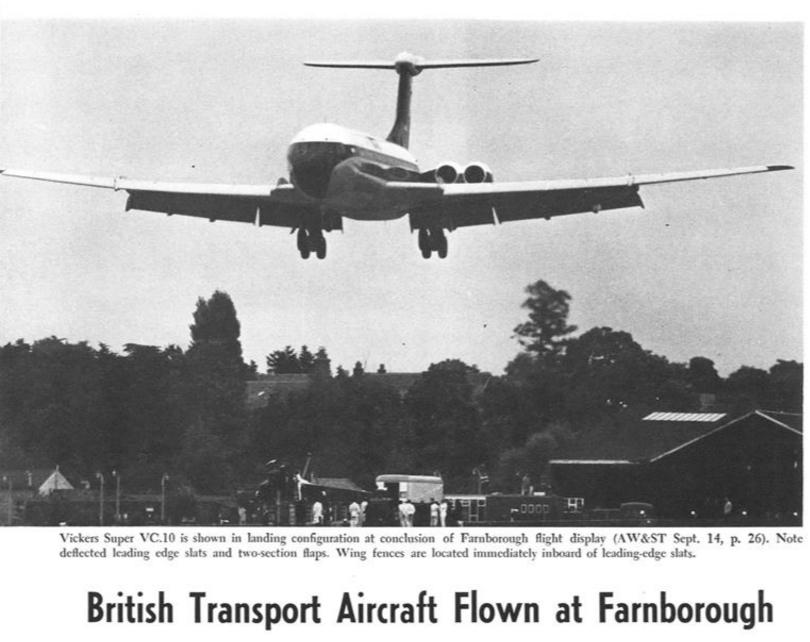 In 1964, the British Aircraft BAC 111 completed a flight demonstration at Farnborough. At the time, it was reported that production would increase to four per month “by year-end.” The Vickers Super VC10 also was included in the Farnborough flight display, and was remarked upon for its deflected leading edge slats and two-section flats. In 2013, Tony Osborne penned a “Goodbye” to the storied VC10, describing the “labor of love” it took to maintain the aircraft. 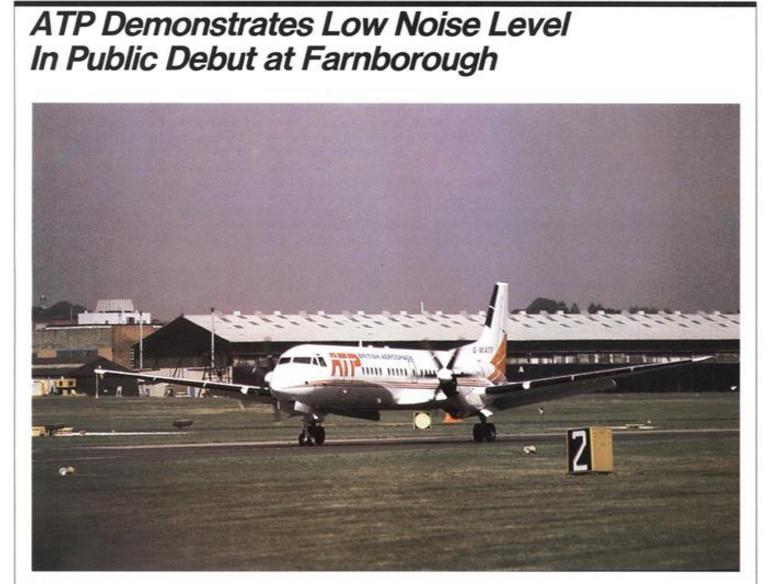 On Aug. 6, 1986, British Aerospace demonstrated its ATP powered by two Pratt & Whitney 124/125 engines and emphasized the noise reduction due to the six-blade slow-speed propellers created by the then-Hamilton Standard Division of United Technologies and British Aerospace. The article also noted entry-into-service competitors Fokker 50 and the Franco-Italian ATR 72. 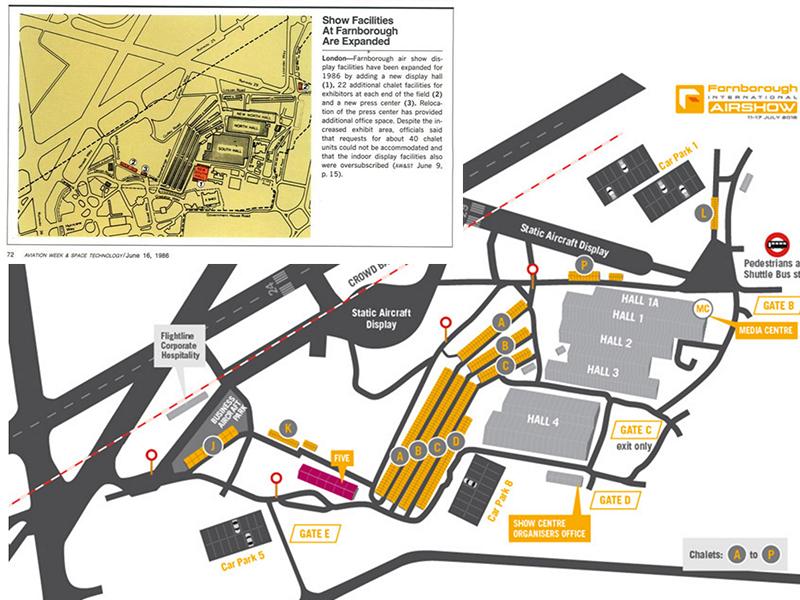 1986: Show Facilities at Farnborough Are Expanded

Also in 1986, Farnborough announced an expansion of a new display hall, 22 additional chalet facilities and a new press center. Visually, the layout of the grounds has not changed much over 30 years. 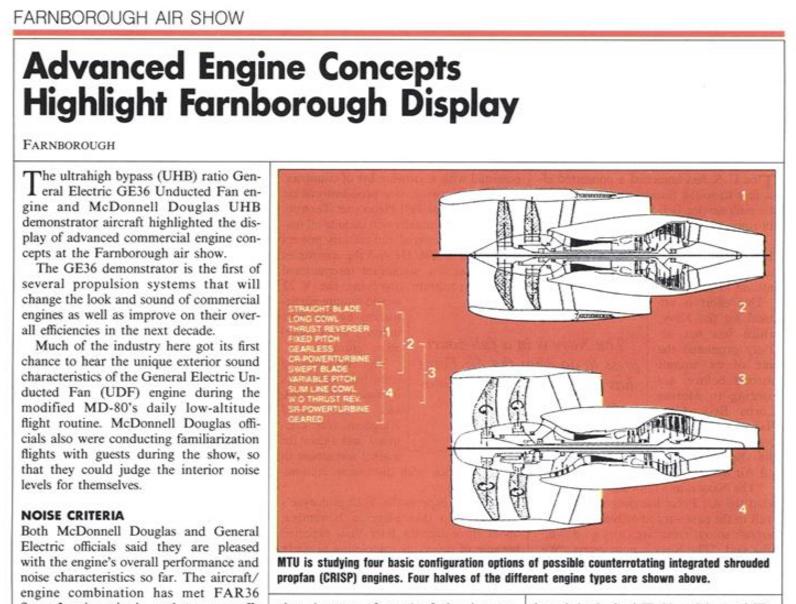 In 1988, the ultrahigh bypass (UHB) General Electric GE36 Unducted Fan engine and McDonnell Douglas UHB were highlighted during the Farnborough Airshow. By meeting the FAR 36 Stage 3 noise criteria, UHB was deemed poised to “change the look and sound of commercial engines….” At the same time, Pratt & Whitney and Allison were developing the geared 578-DX UHB demonstrator engine and were beset by some program delays. Those programs were never fully completed after the fuel crisis abated, which meant there was no longer a need for the type of cruise performance offered. 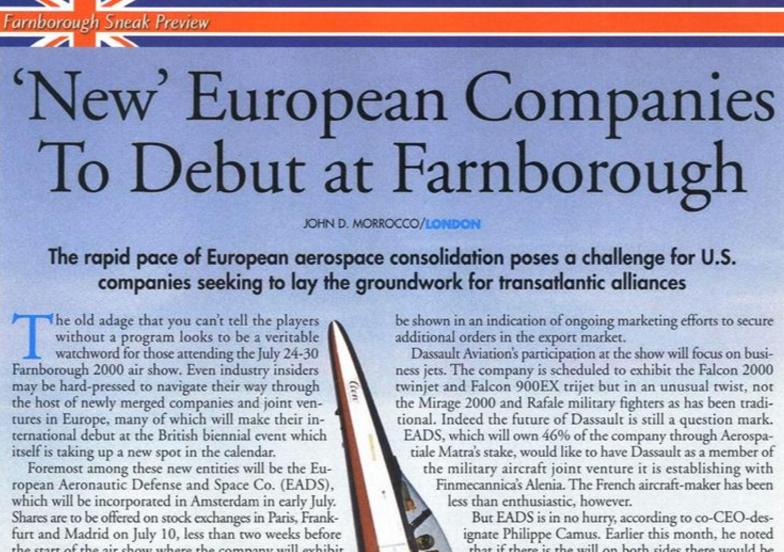 In 2000, as the "New European Companies" debuted, the European Aeronautic Defense and Space Co., Airbus Integrated, Thomson Racal Defense and the Bell Boeing V-22 were highlighted in this article. The Fairchild Dornier 328Jet was intended to be featured while the “manufacturers continue[d] to battle for orders in this expanding market." 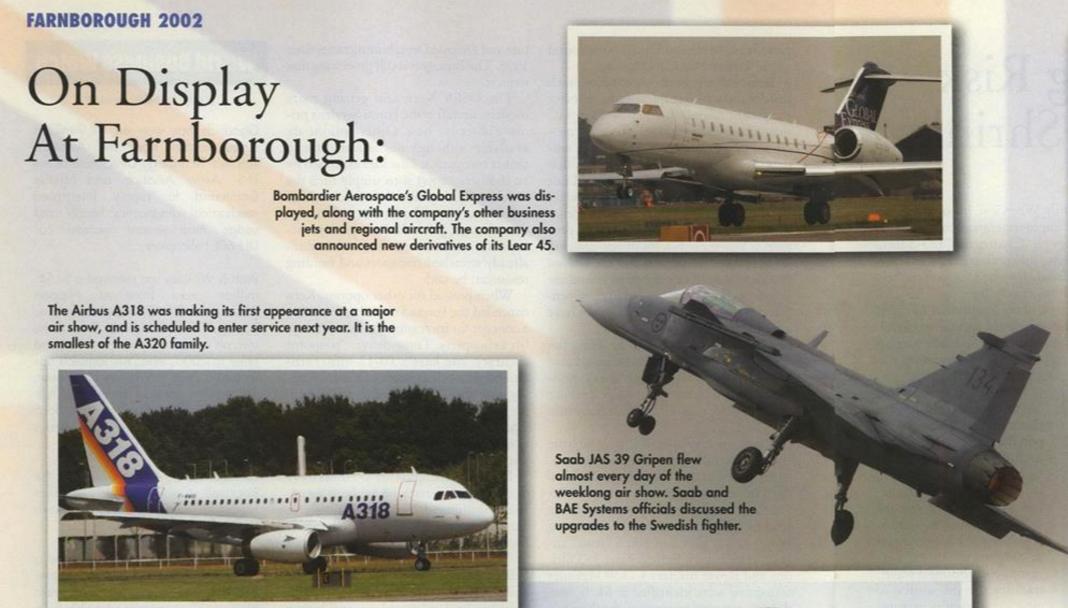 2002: On Display at Farnborough

In 2002, the Airbus A318 made its first appearance and the Virgin Atlantic A340-600 performed a flyover on the first day of the show. Fast-forward 14 years—the Virgin crew of an  A340-600 had to make a return landing an hour after takeoff due to a green laser temporarily blinding a pilot’s vision. 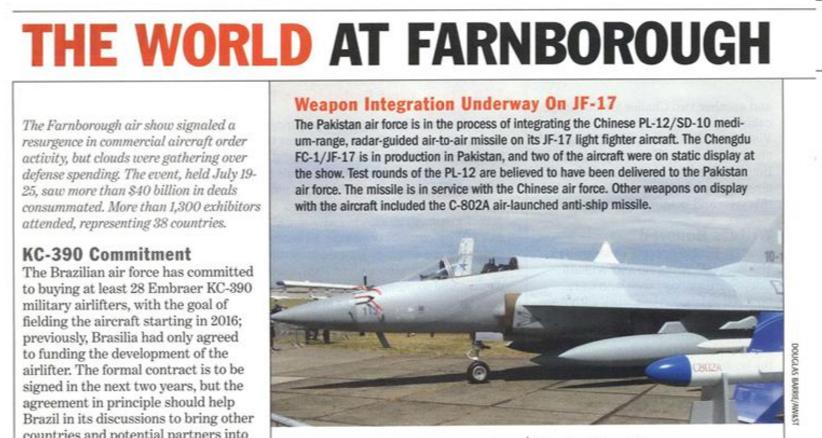 2010: The World at Farnborough

The July 26, 2010, issue highlighted the Irkut narrowbody MS-21 as the largest commercial aircraft sale up to that time. It was a hefty $3 billion. Crecom Burj Resources, a Malaysian leasing startup, signed a letter of intent for 25 150-passenger MS-21-200s and 25 180-passenger MS-21-300s. Irkut rolled out the first prototype of the commercial aircraft on June 8, 2016. but announced a change of entry-into-service date due to an inability to complete required ground checks by the end of the year. The MC-21-300 will be certified with Pratt & Whitney PW1400G-JM turbofans; the Aviadvigatel PD-14 is listed as an alternative engine.

At Farnborough in 2010, GE had live demonstrations of MyEngines, a customer iPhone application that tracks overhaul, parts management, "health alerts" and engine configurations. Six years later, in 2016, GE announced Predix, a technology platform that also captures data - then analyzes it. 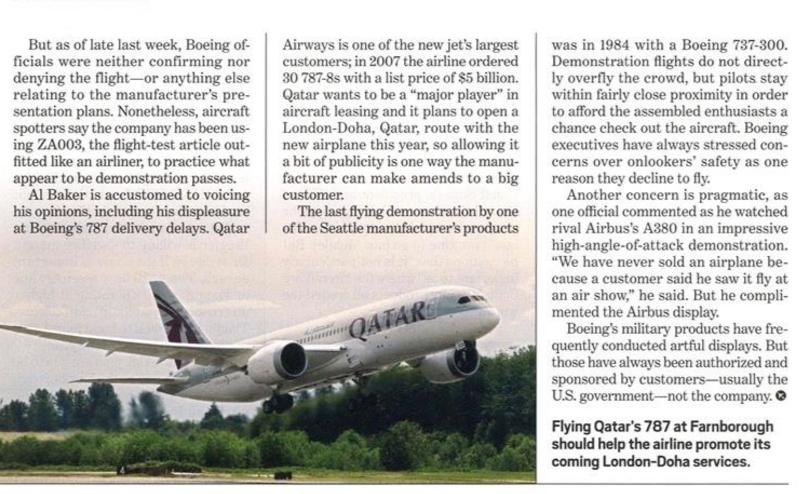 2012: Speculation Continues as to Whether Boeing Will Fly 787 at Farnborough

In the July 2, 2012, issue, Michael Mecham reported on the “will they, won’t they” aspect of a Qatar Airways Boeing 787-8 flying demonstration. Onlookers’ safety and practicality were cited as reasons not to fly the aircraft. CEO Akbar Al Baker voiced his displeasure at Boeing’s 787 delivery delays. The airplane did indeed fly, and Baker unveiled it to the media at the event. See an exclusive behind-the-scenes video of flying the 787 in November 2012. 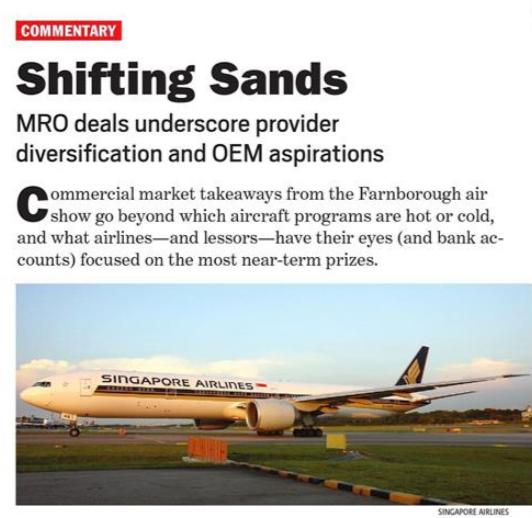 In 2014, Sean Broderick described the OEMs as "hungry" for the MRO aftermarket, reporting on the $1.5 billion added to the GE Aviation services backlog, the smaller but "telling" deal between GE unit Middle River Aircraft Systems and Lufthansa Technik to offer repairs and exchanges on the Boeing 747-8 GEnx-2B thrust reversers, and the newly announced joint venture between Boeing and Singapore Airlines subsidiary SIA Engineering. In early 2016, SIAEC tells Aviation Week that "The JV with Boeing will primarily focus on fleet management services; at the same time, MRO services will also form part of the Fleet Integrated Solutions that the Boeing JV will offer customers.” SIAEC expects the joint venture to open between July and September this year. During the 2016 Singapore Airshow, SIAEC announced plans to set up a JV with Airbus to provide maintenance, cabin upgrades and modifications for A380, A350 and A330 aircraft.

Curated from Aviation Week's 100-Year Archive, these projects and programs debuted at the Farnborough Airshow over the past 50 years. Revisit the pervading mood of the event year after year—from high hopes to pessimism—and contemplate the fate of the projects that will debut at Farnborough 2016.