Fighting ISIS: On the Ramp at Al Udeid Air Base

A B-52 strategic bomber assigned to the 69th Expeditionary Bomb Sqdn. sits on the flight line. The B-52 squadron supports the troops on the ground in Iraq, Syria and Afghanistan by flying close-air-support and air-interdiction missions, and plays a key role in intelligence collection and target development using its advanced sensor suite. The B-52s at Al Udeid are being upgraded with the latest technology, including digital data links, moving map displays, next-generation avionics, new radios and the ability to carry additional smart weapons internally. 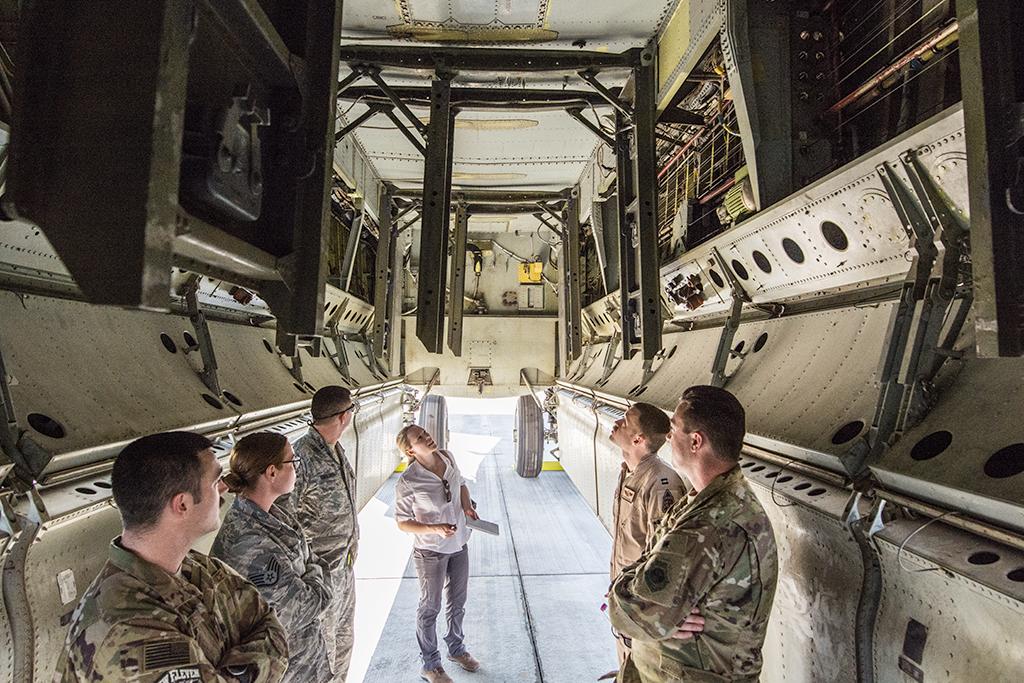 The U.S. Air Force is in the midst of increasing the smart weapons capacity of B-52s more than 50% by upgrading the aircraft’s internal weapons bay with a conventional rotary launcher. The Mil-Std. 1760 Internal Weapons Bay Upgrade will allow the B-52 to carry up to eight smart bombs internally, the first time the aircraft has had this capability. The second increment of the upgrade will integrate cutting-edge weapons such as the Joint Air-to-Surface Standoff Missile-Extended Range and the jammer variant of the Miniature Air Launched Decoy, which can be used to jam enemy electronics. 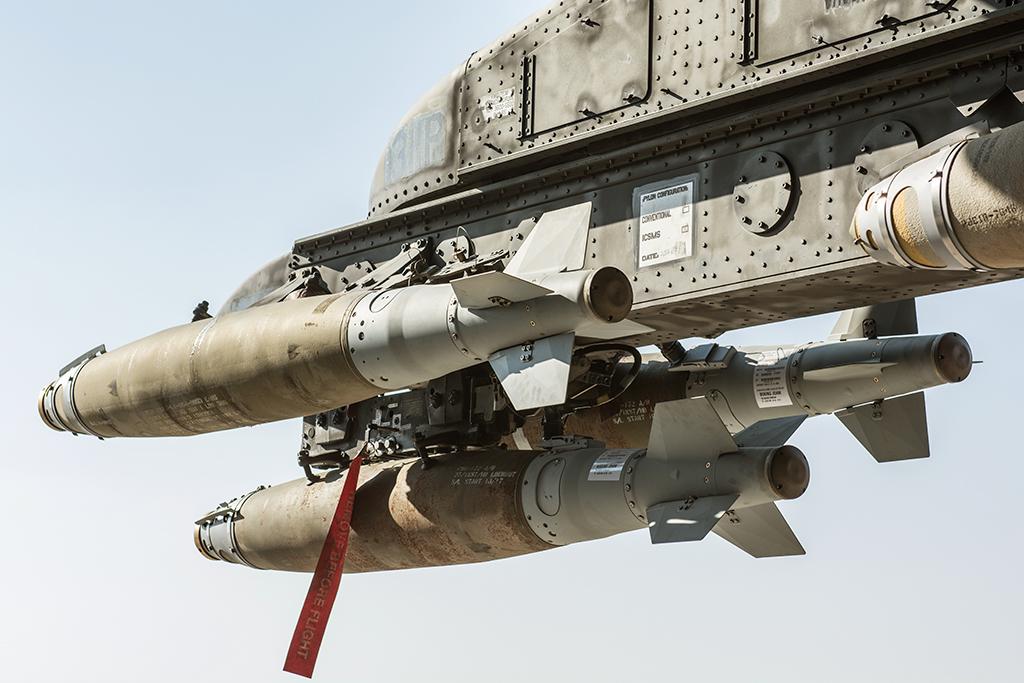 The B-52 can carry a variety of weapons from its wing pylons, including GPS-guided 500-lb. GBU-38 Joint Direct Attack Munition and 2,000-lb. GBU-31-class penetrator bombs. The B-52 also carries laser/GPS-guided GBU-54 bombs that use information from the electro-optical Sniper pod to hit moving targets and low-collateral bombs that are filled with inert material such as concrete. 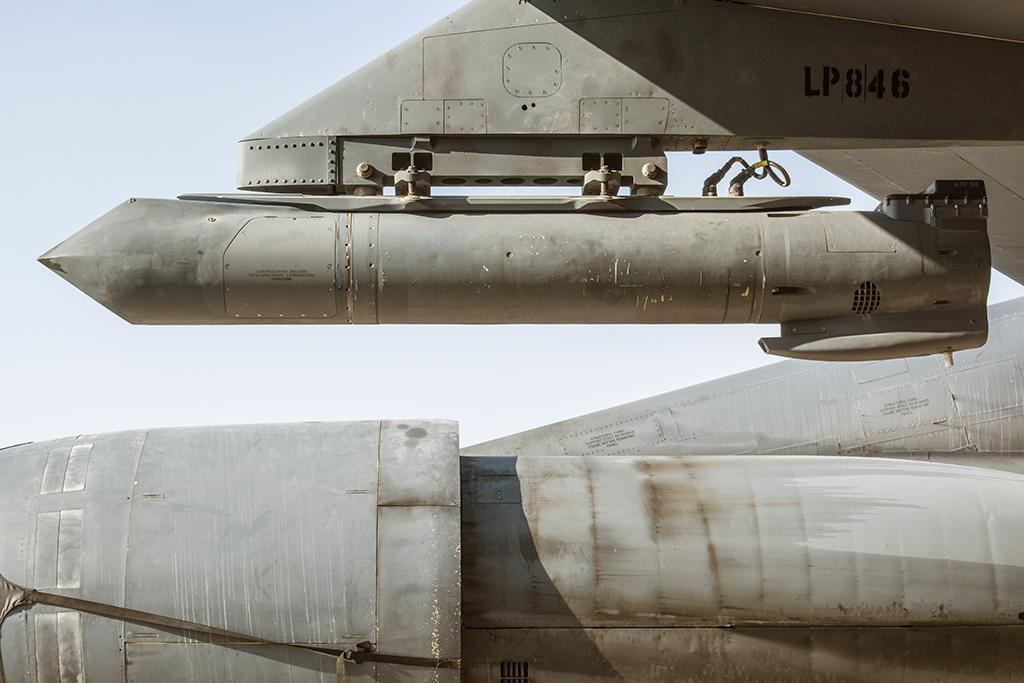 Lockheed Martin’s Sniper electro-optical targeting pod enables advanced tracking, identifying and engaging of both mixed and moving targets, in the air and on the ground. The pod provides high-resolution FLIR and HDTV images, and a dual-mode laser designator. A two-way video data link allows the crew to share information with ground troops in real time. 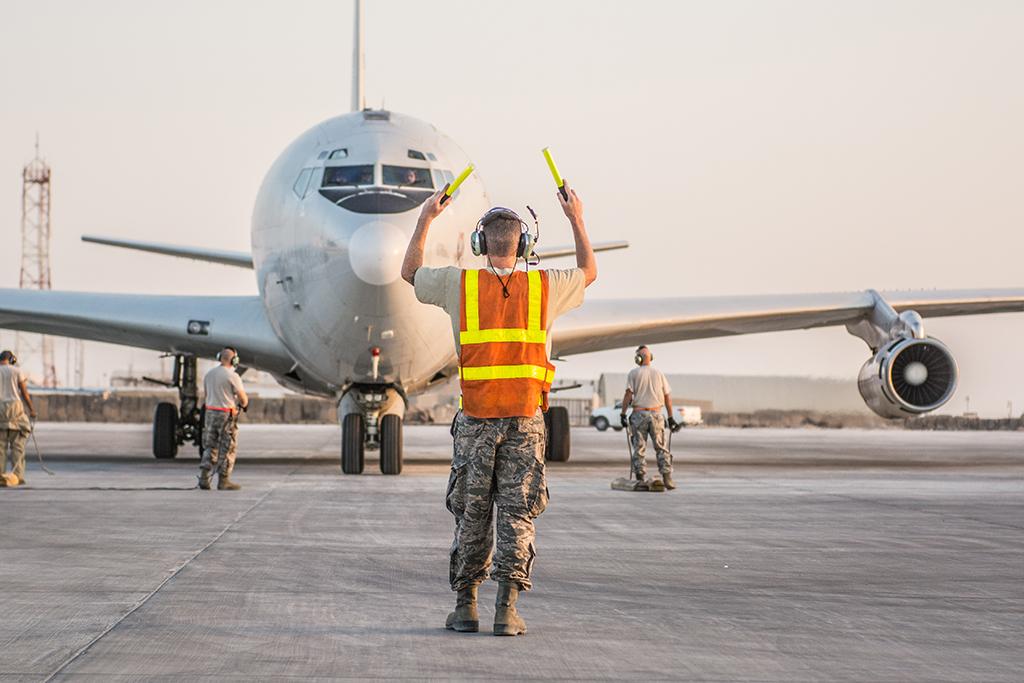 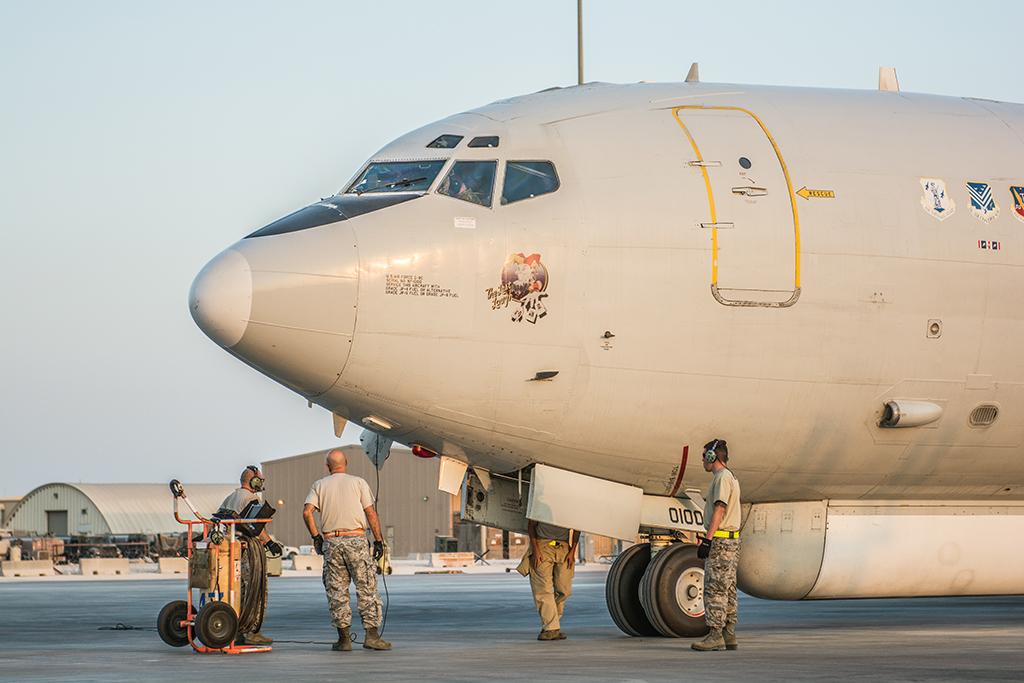 Maintainers assigned to the 7th Aircraft Maintenance Unit perform post-flight checks on an E-8C J-Stars after a mission. The aircraft’s most distinguishing feature is a 27-ft., canoe-shaped, side-looking phased array antenna mounted under its forward fuselage, which collects ground intelligence over a wide area. 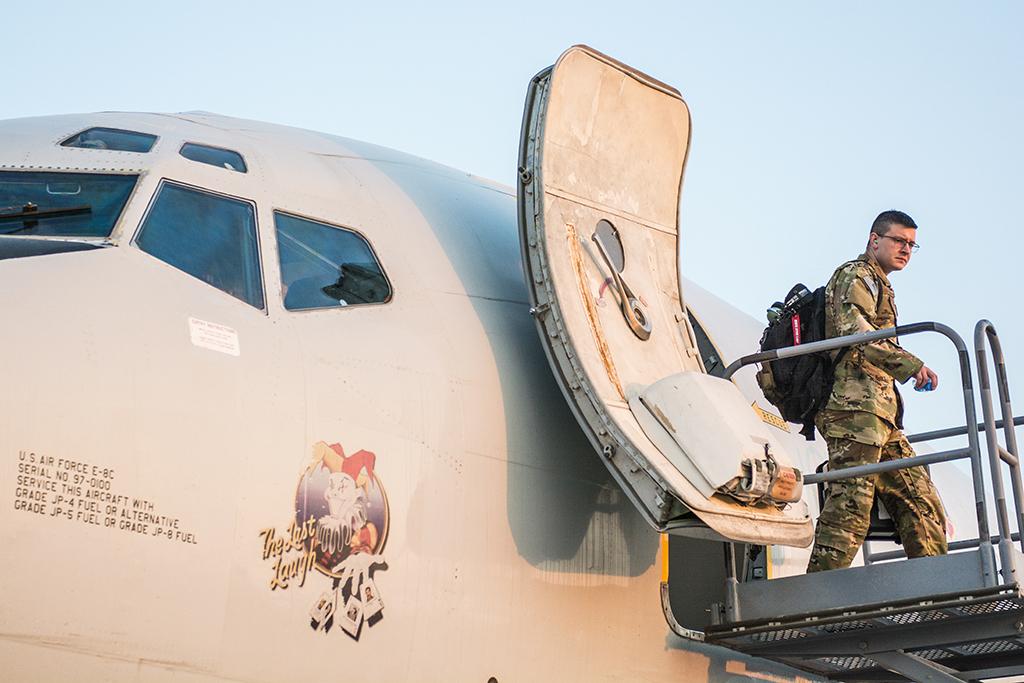 Crewmembers assigned to the 7th Expeditionary Command and Control Sqdn. disembark from an E-8C J-Stars after returning from a mission. The crews primarily conduct battle-management and control- and ground-moving-target-indicator work from above the battlefield in support of operations in Iraq, Syria and Afghanistan. 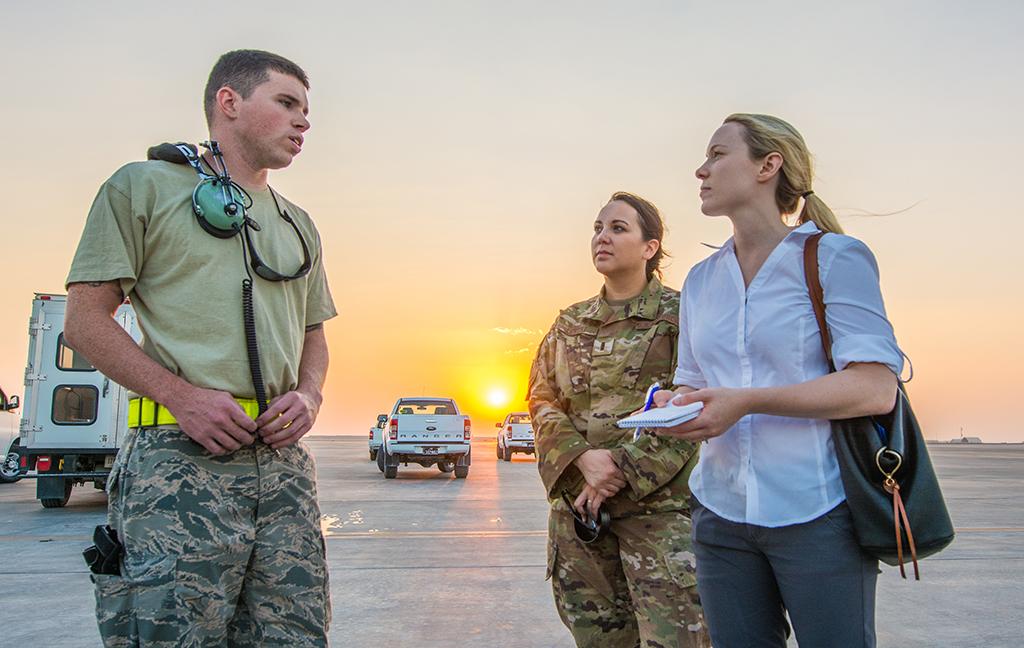 Aviation Week Pentagon Editor Lara Seligman (right) interviews Senior Airman William Connelly (left) about the maintenance required for an E-8C J-Stars. The aircraft is in high demand in the Middle East: The operational fleet of just 16 aircraft has flown more than 130,000 combat hours in Iraq and Syria since 2001. 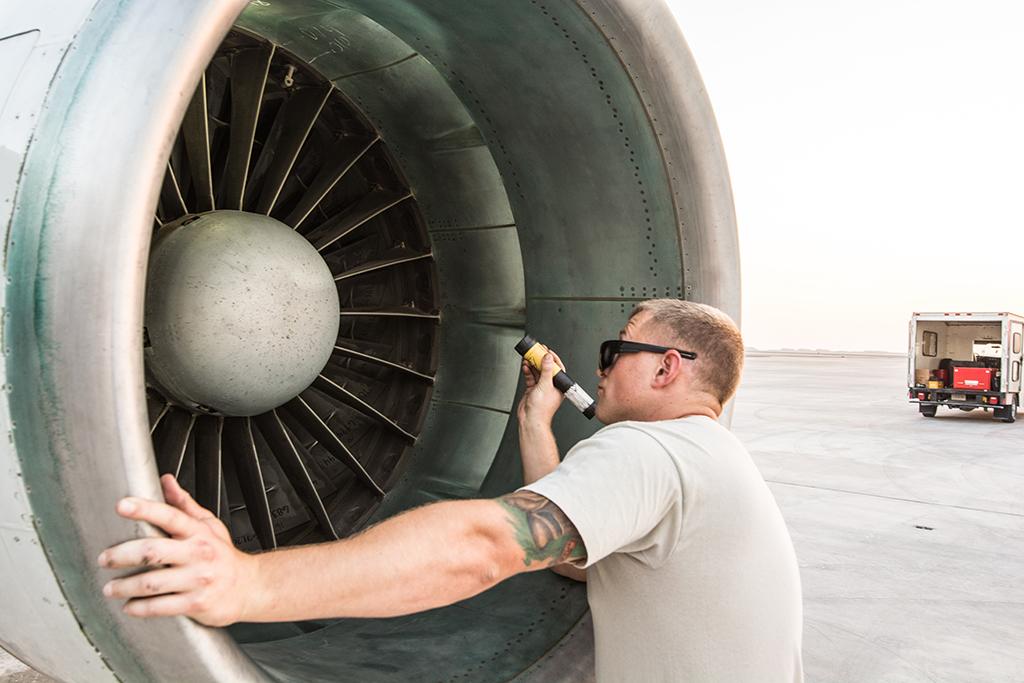 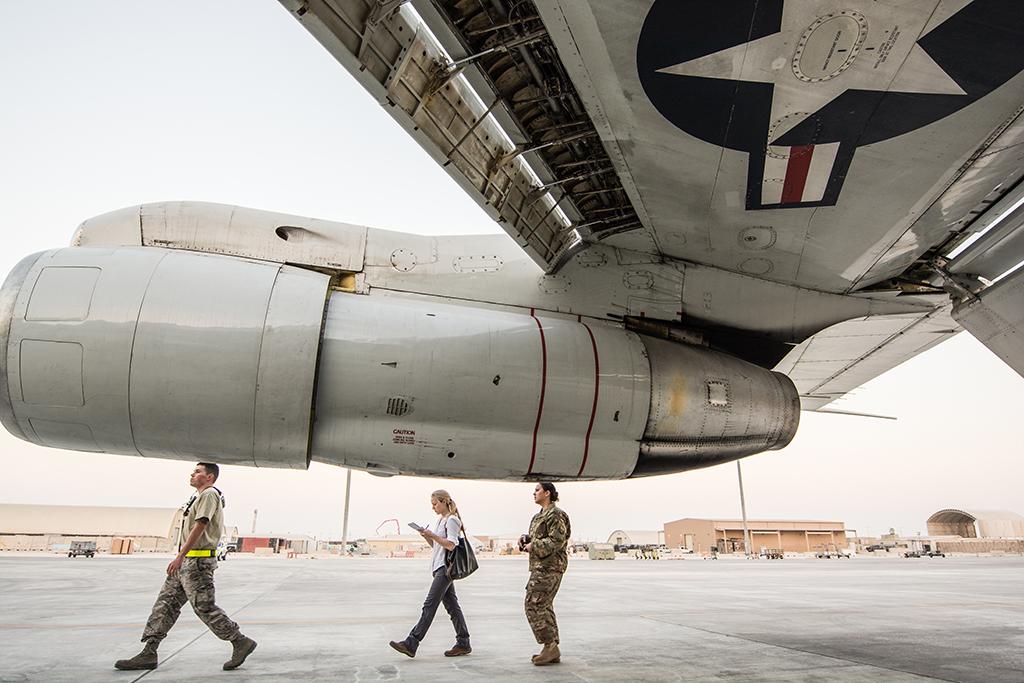 The Air Force is weighing whether to continue with plans to recapitalize the J-Stars fleet when it reaches the end of its service life in the 2030s with a similar manned capability, or to meet requirements for battle management and ground moving target indication through a networked approach that would tie information from disaggregated sensors into one battlefield picture. 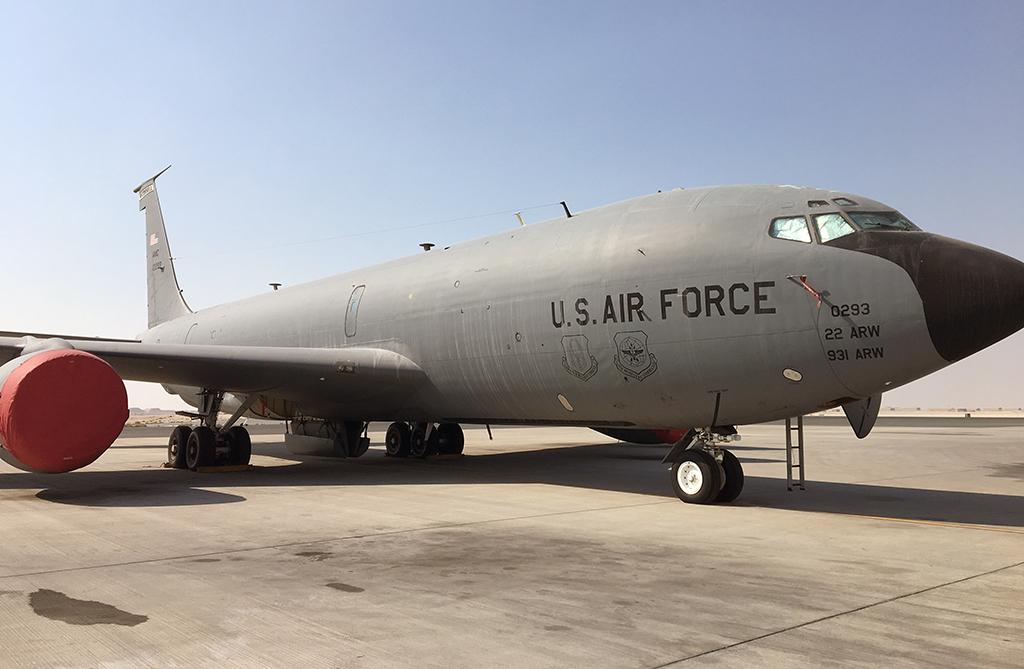 A KC-135 Stratotanker sits on the ramp. This aircraft is one of eight Air Force KC-135s configured as air-refueling receivers, which means it has the capability to refuel other aircraft and receive fuel from other tankers. These tankers primarily support special operations missions, according to TSgt. Christopher Bower, crew chief for the 340th Expeditionary Aircraft Maintenance Unit. The KC-135 can be reconfigured for cargo and medevac missions. 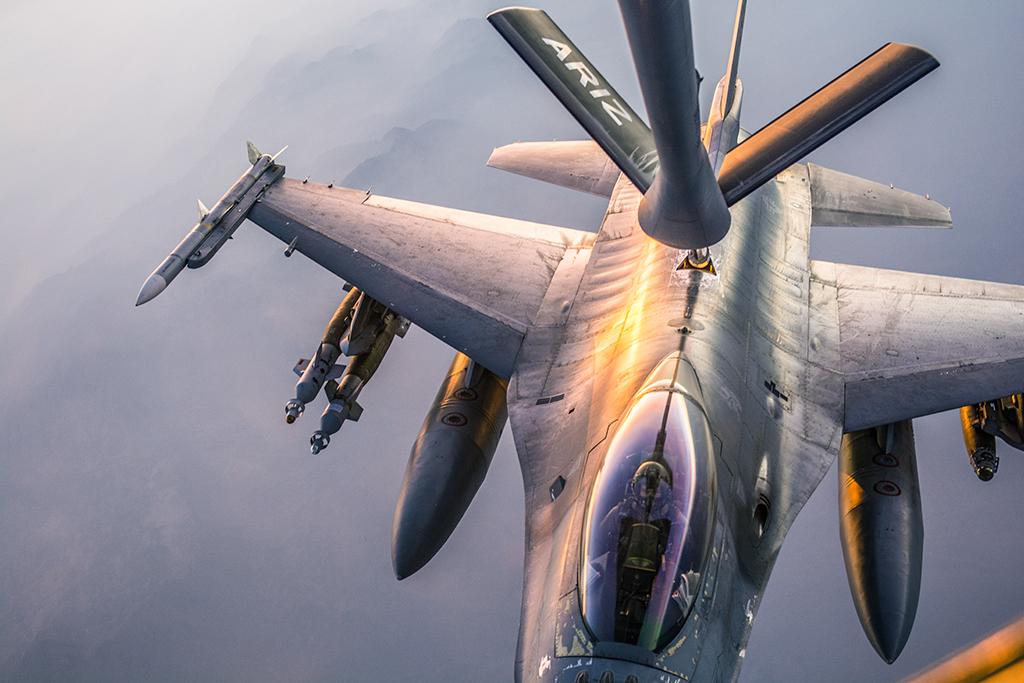 Aviation Week joined the crew of a KC-135 refueling tanker assigned to the 340th Expeditionary Air Refueling Sqdn. for an almost 10-hr. refueling mission from Al Udeid to Afghanistan and back on Nov. 5. Here, the KC-135 passes fuel to a U.S. F-16 Fighter Falcon over Afghanistan. 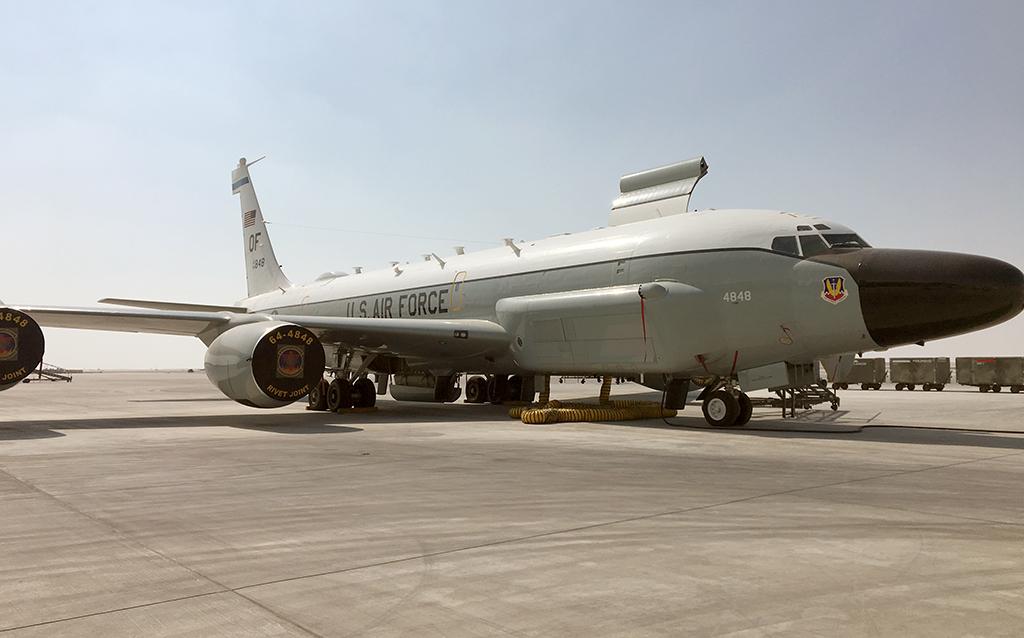 This RC-135 Rivet Joint reconnaissance aircraft has been flying since 1964 and has racked up 30,000-40,000 flight hours, according to Sr. Airman Chad Hampton, crew chief for the 763rd Expeditionary Aircraft Maintenance Unit. Rivet Joint’s on-board sensor suite allows the mission crew to detect, identify and geo-locate signals throughout the electronic spectrum, which they then can disseminate to the rest of the force via the aircraft’s extensive communications suite. The fleet was reengined with CFM56 engines and an upgraded digital glass cockpit. The interior can seat 30-50, including the cockpit crew, electronic-warfare officers, intelligence operators and in-flight maintenance technicians. 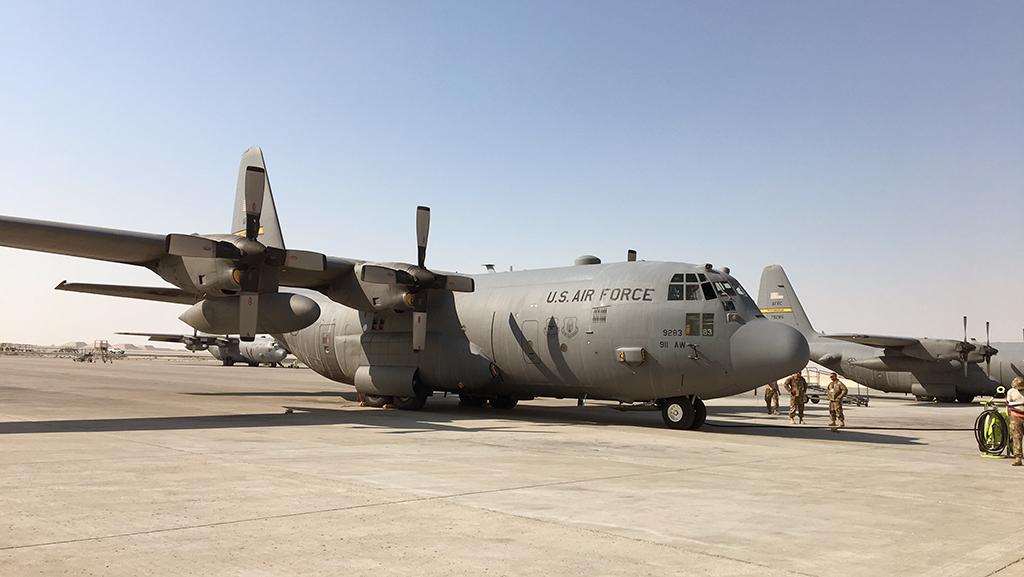 C-130 cargo aircraft are primarily used to transport ammunition, troops and vehicles the size of small firetrucks, according to TSgt. Kody Underwood, crew chief for the 746th Expeditionary Aircraft Maintenance Sqdn. The aircraft can accommodate up to 92 people or 68 paratroopers and can also be reconfigured to carry 17 litters for aeromedical evacuation.

Al Udeid Air Base, Qatar, is the largest U.S. military air base in the Middle East and host to the command-and-control hub that monitors and directs U.S. and coalition air operations across the entire U.S. Central Command region. It houses the Qatari air force, U.S. Air Force, UK Royal Air Force and other coalition personnel, and an estimated 100 operational aircraft. Aviation Week’s Pentagon Editor Lara Seligman visited Al Udeid Nov. 3-7 for an exclusive, behind-the-scenes look at how U.S. and coalition partners envision, plan and execute air operations in the region, from the Horn of Africa, to Iraq and Syria, to Afghanistan.