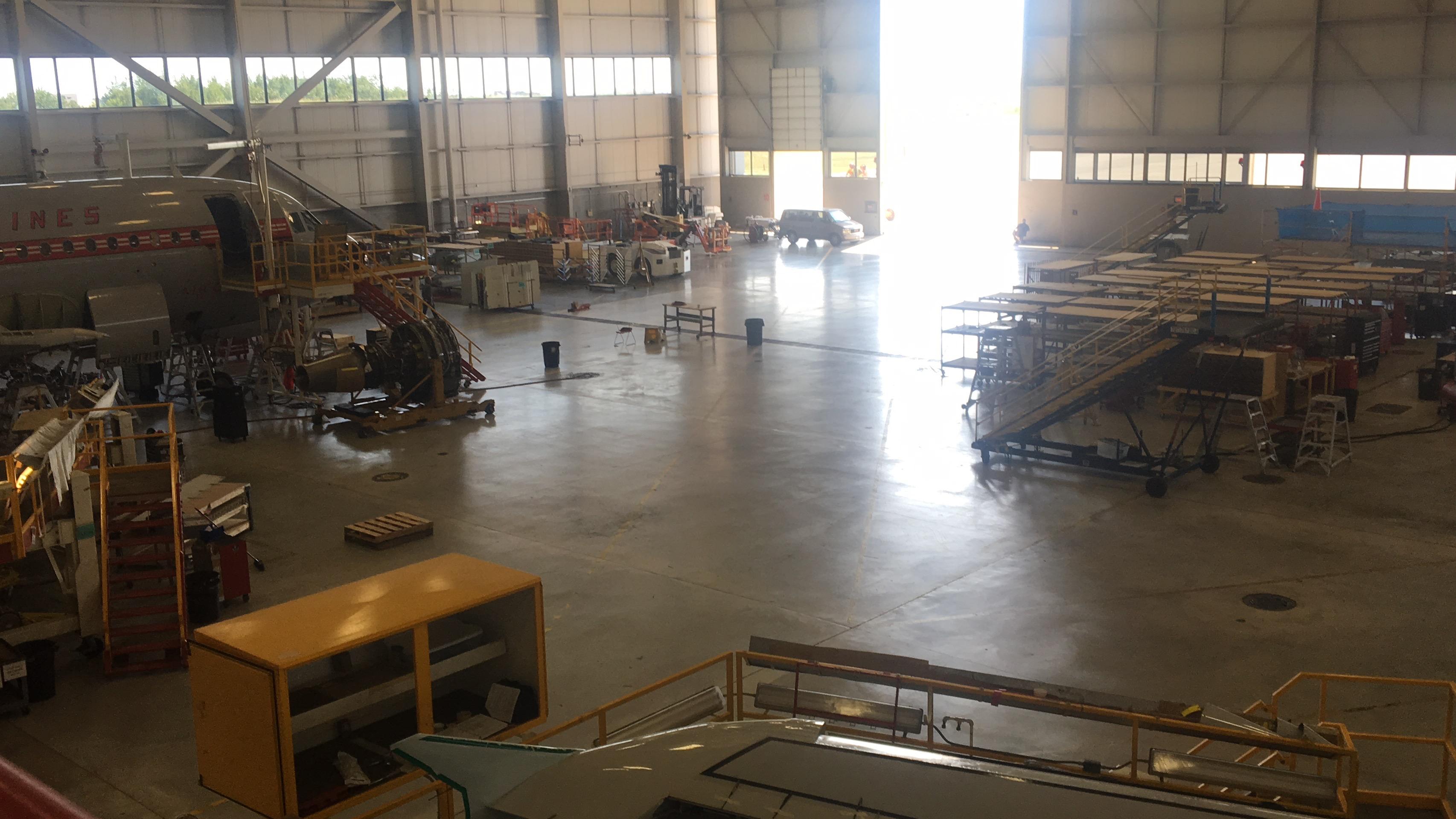 The Cold Hard Facts About The Hangar

In 2012, AAR moved into what had been an abandoned hangar that had not had a formal tenant since 2005—the year Northwest Airlines filed for bankruptcy protection. Mark Ketterer, vice president of operations for the Duluth facility, retired from Northwest in 2009, started a small business in the Twin Cities, but then joined AAR when the facility opened.

They’ve never had to shut down due to cold weather temperatures, but Ketterer says that maybe once in his four years with AAR, extreme weather prevented employees from physically getting to work, and on that day they did close for 24 hr. Four large gas-powered heating units are used during extreme cold and also four smaller heating units for when it’s “only 0-10 deg. that day,” Ketterer says (semi-jokingly).

“We can open the doors, pull an airplane out, close the doors right away—so you’re open maybe 20 min., and this hangar will recover in about 10 min,” says Ketterer. The hangar temperature hovers around 70F.

AAR has five major facilities, which are located in Duluth, Indianapolis, Miami, Oklahoma City and Lake Charles, La.; a new facility will be opening this year in Rockford, Il. 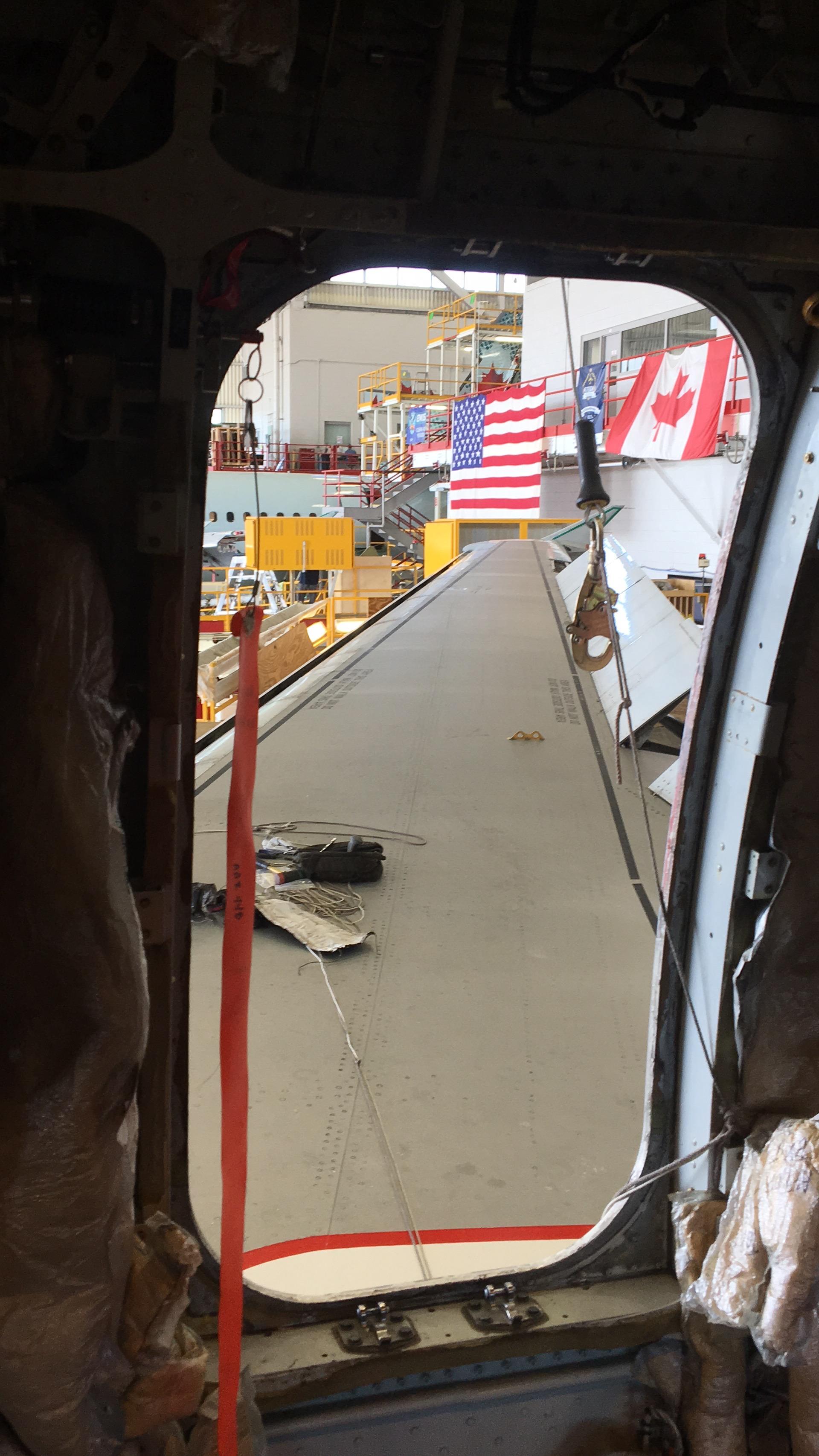 One-Stop Shop For One Customer

AAR Duluth's primary customer is Air Canada. Since opening in 2012, AAR has completed heavy maintenance checks on 250 aircraft and plans to complete about 65 aircraft visits per year, through 2018.

The facility is certified to handle Airbus A320-family aircraft and Boeing 737s. “We are a dedicated facility in Duluth catering to a single customer. There are no plans to change that in the near future,” says Ketterer. 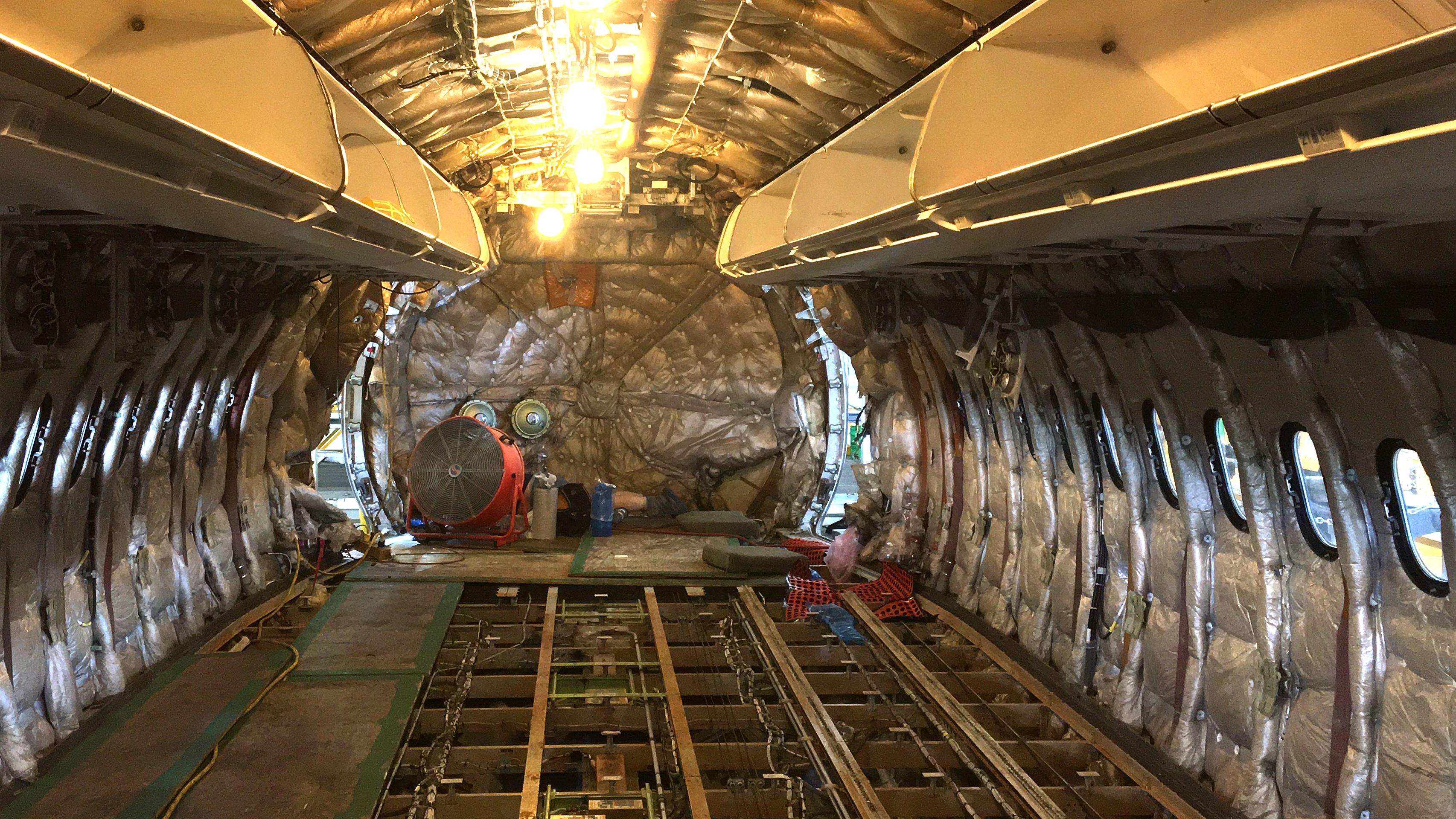 This A319 (C-FZUH) had arrived about 8-10 days previously. Once the floors were taken out and the structures underneath inspected, needed components or areas get repaired or replaced.

Non-airthworthy items such as holes or scratches on the overhead bins are addressed, but this type of improvement is performed last. 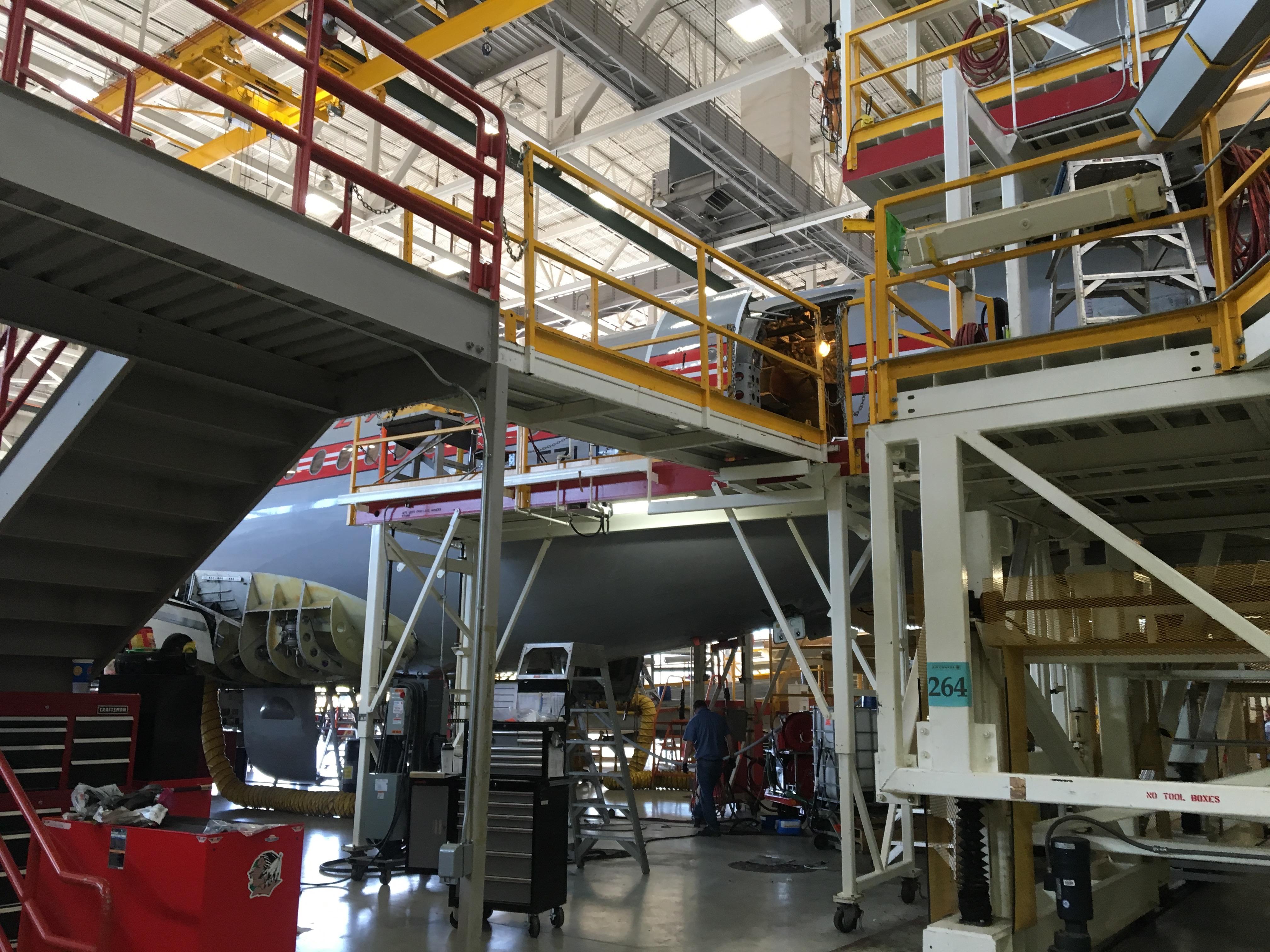 Three At A Time

When I arrived, an Airbus A319 and an A319-114 (C-GAQZ) sat in the hangar and another A319 was departing that day after completion. “Our goal is to complete all the aircraft on our schedule and have room for additional drop-in work in the fourth line spot,” says Ketterer. 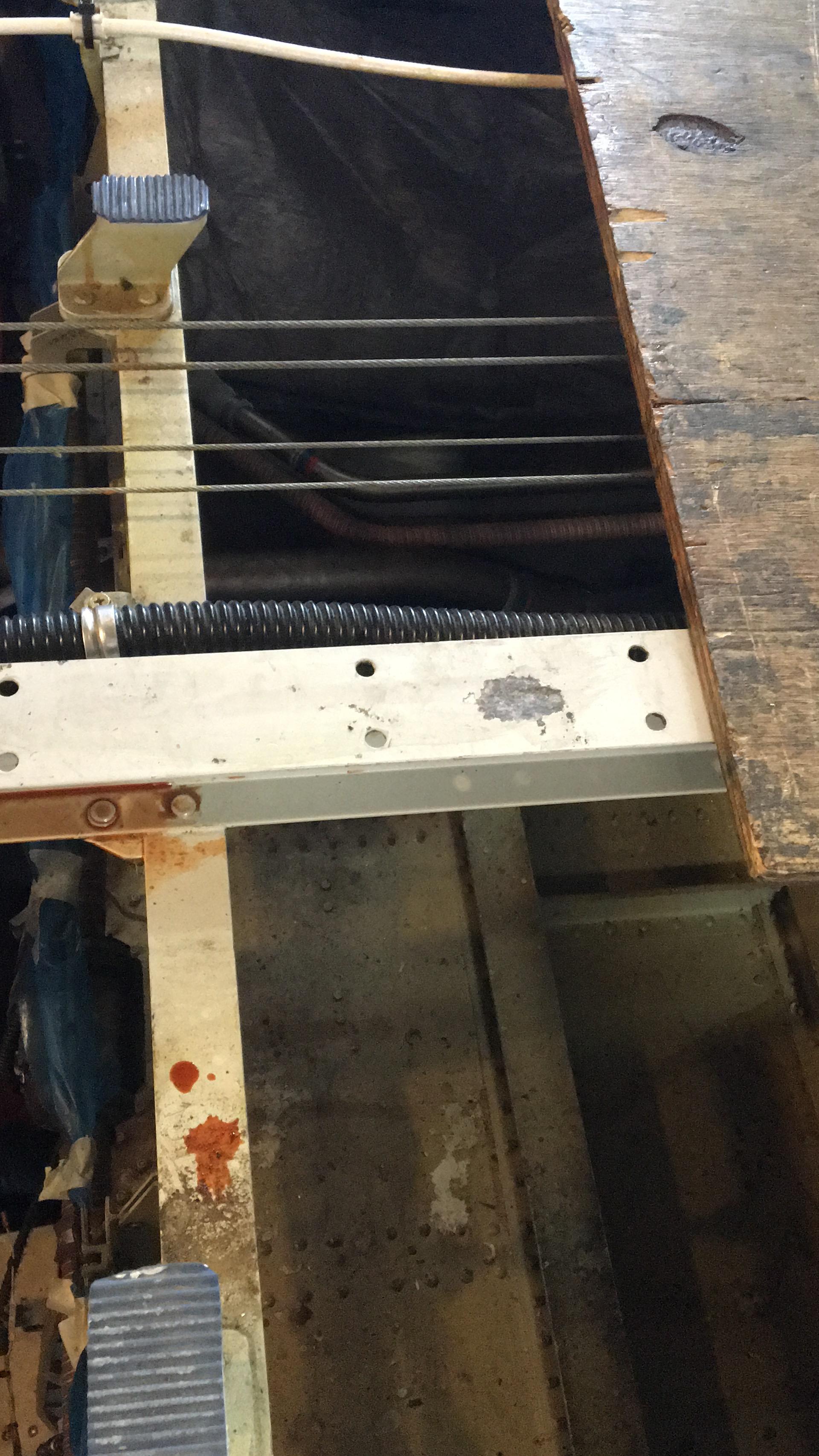 This metal beam in the flooring of the aircraft shows signs of corrosion. Depending on the type and severity of degradation, the component might be repaired or completely replaced. The customer, using 1MRO—AAR's propriety software suite—can see real-time updates of each “card” or discrepancy found during a check. 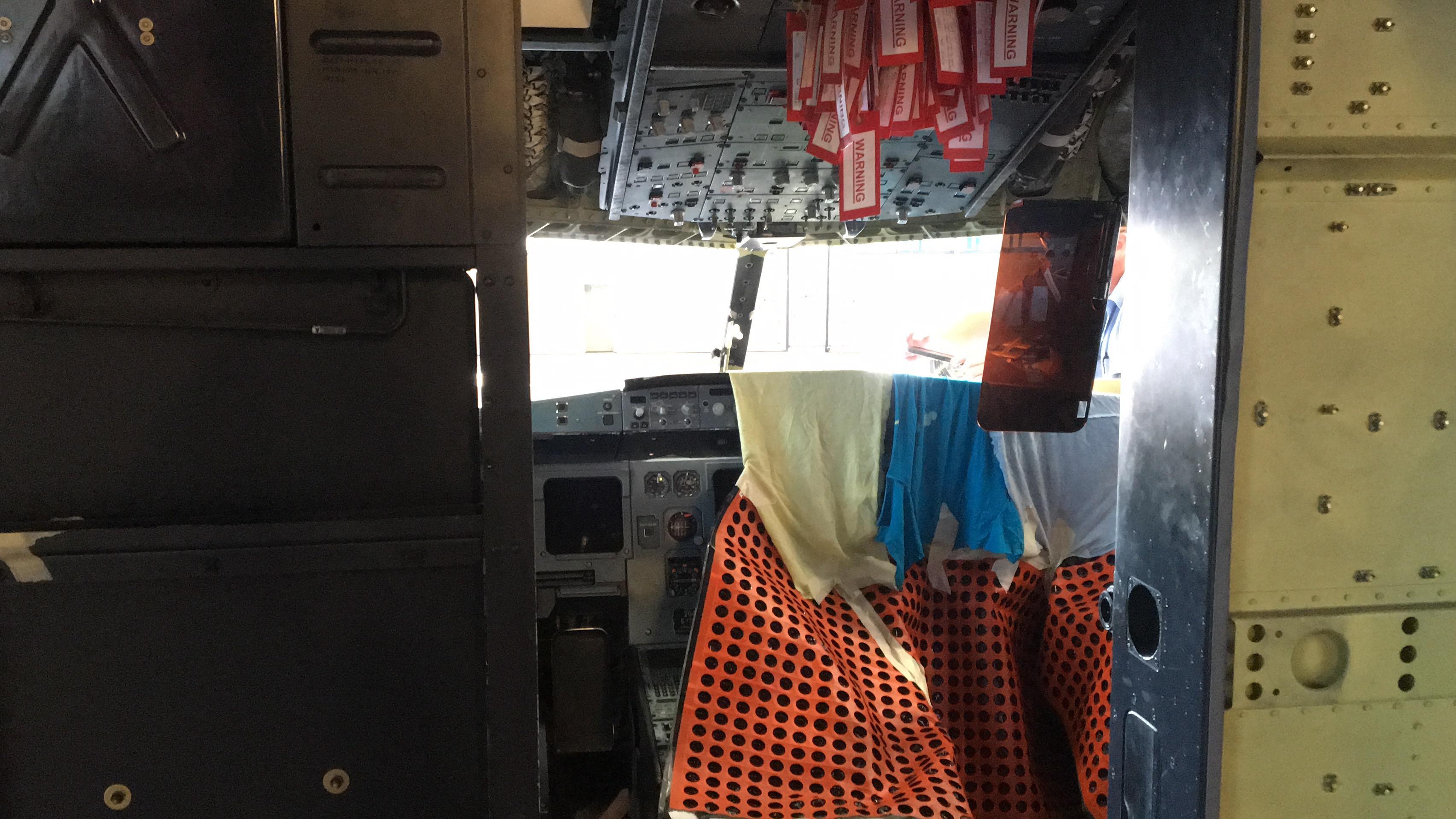 Lockout/Tagout – LOTO As The New Way To Tag

Shown is the current system to tag circuit breakers that have been pulled, a process that cuts power to the system.

In early July, the AAR Oklahoma City Facility implemented a new proprietary lockout/tagout system. Instead of hanging red tags for each procedure, resulting in multiple tags on one circuit breaker that can fall or become displaced, a single tag is hung that corresponds with a computer. The digital tagging allows for only one tag to be hung on a breaker or component; it relays all the information. The Duluth facility is in the process of implementing this system and training is underway.

“It’s going to be a big game changer for us. It’s not going to cut days off the check, but just from a safety standpoint it is going to be a leap forward,” says Ketterer.

Everything in the cockpit was covered for the inspection of the window frames. The avionics and interior need to be protected from paint removal and other aspects of the cleaning process. 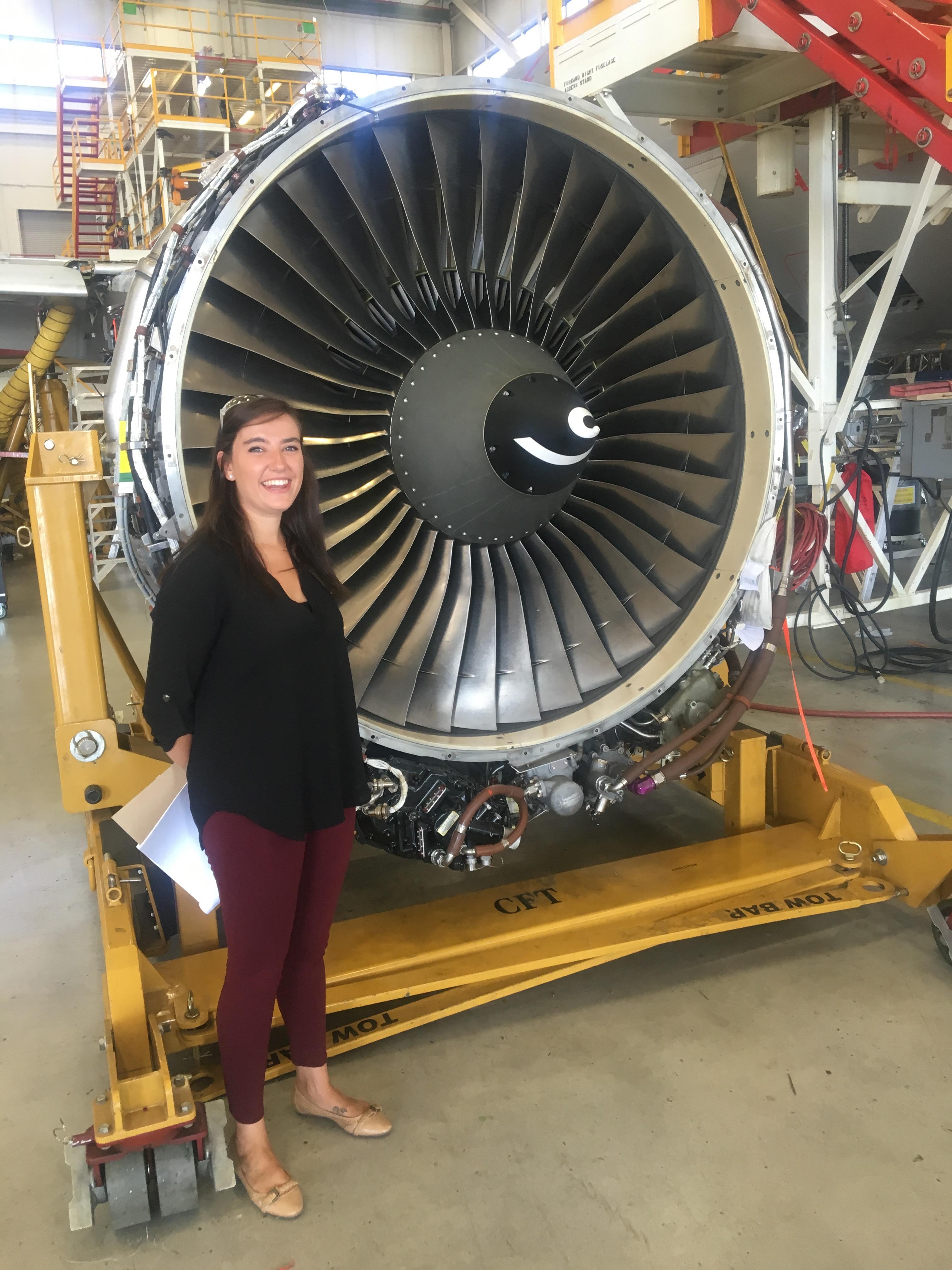 I’m standing in front of one of the two CFM56-5A4 engines recently taken off the aircraft undergoing a heavy maintenance check. 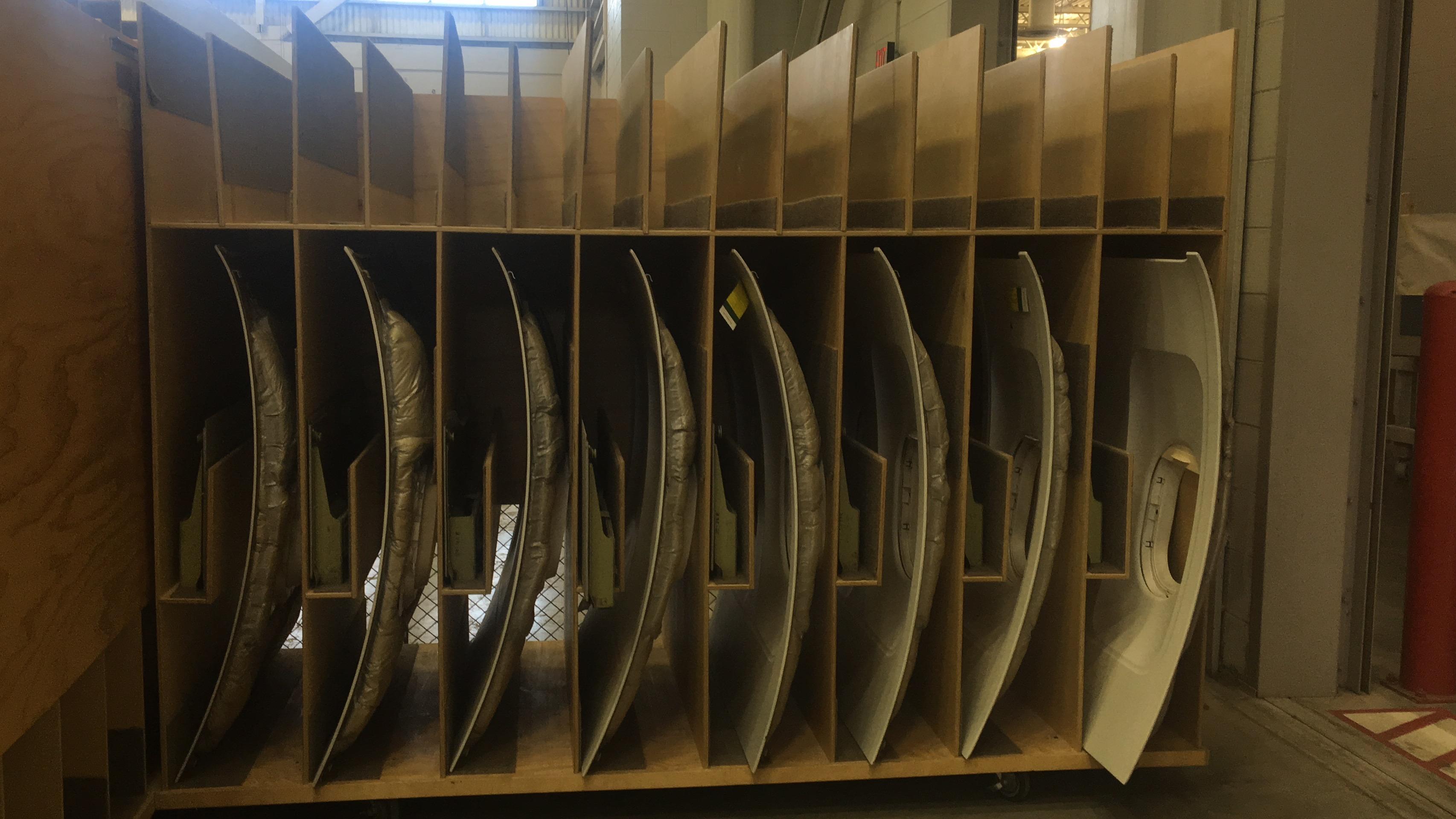 These stands were built locally to house the sidewall and window panels. For customized projects like this, Ketterer and the team always try to keep the job local. Duluth-based Hermantown Millwork completed this stand when AAR moved in.

AAR Duluth has tapped Lake Superior Cleaners to clean all of the seat covers. That operation adheres to the FAA's stringent  standards for preserving the fire retardant built into the fabric during the cleansing process. 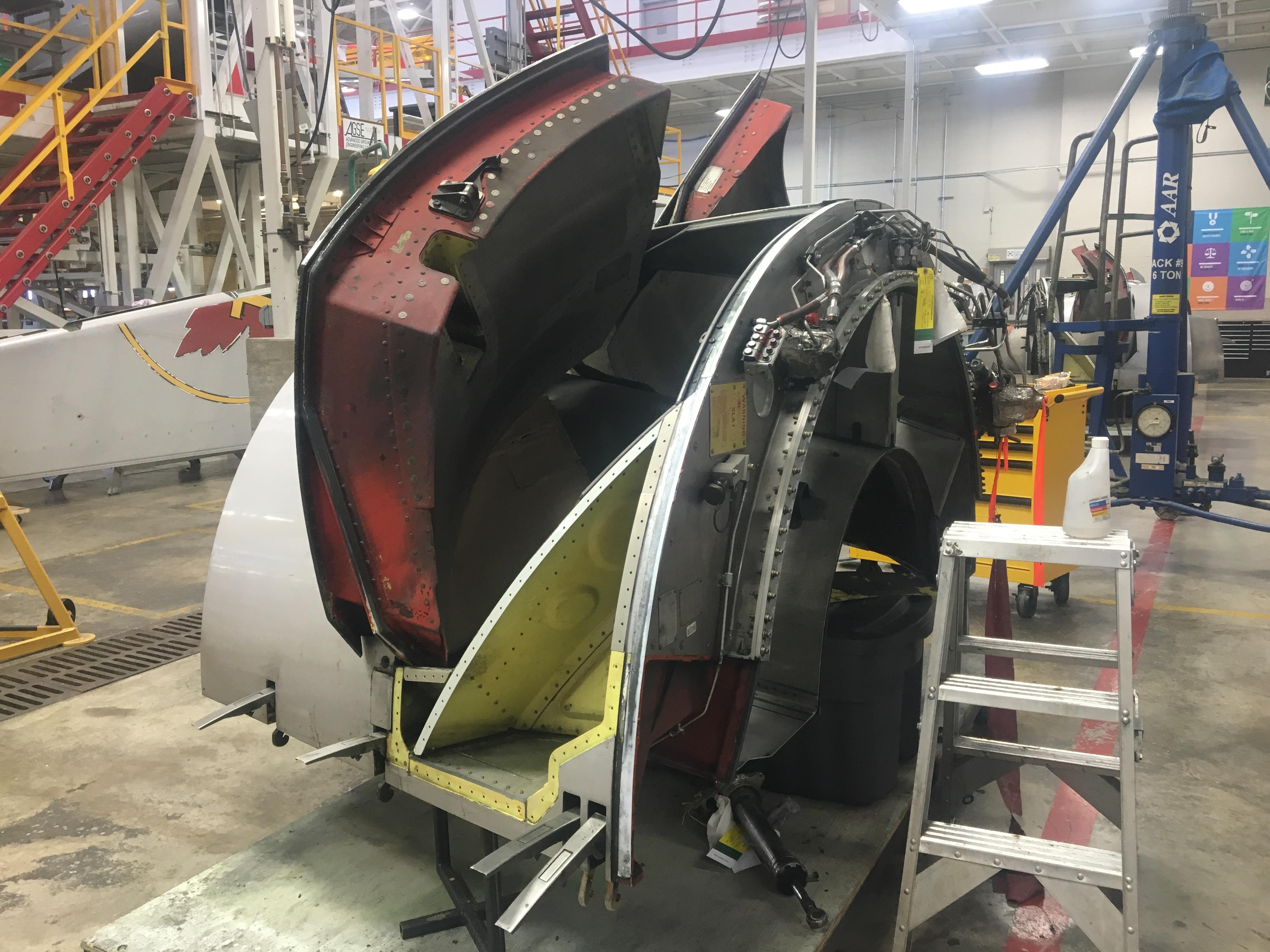 This thrust reverser sat in a row of four, waiting for additional inspection.

Inspecting and repairing their customer’s fleet has become somewhat of a familiar science for the team: “When you keep seeing the same airplane every couple of years, you get to know the airplane. And when we see all of their airplanes, we get to know the fleet. So it gives us an opportunity to help [the customer] figure out where to improve,” says Ketterer. 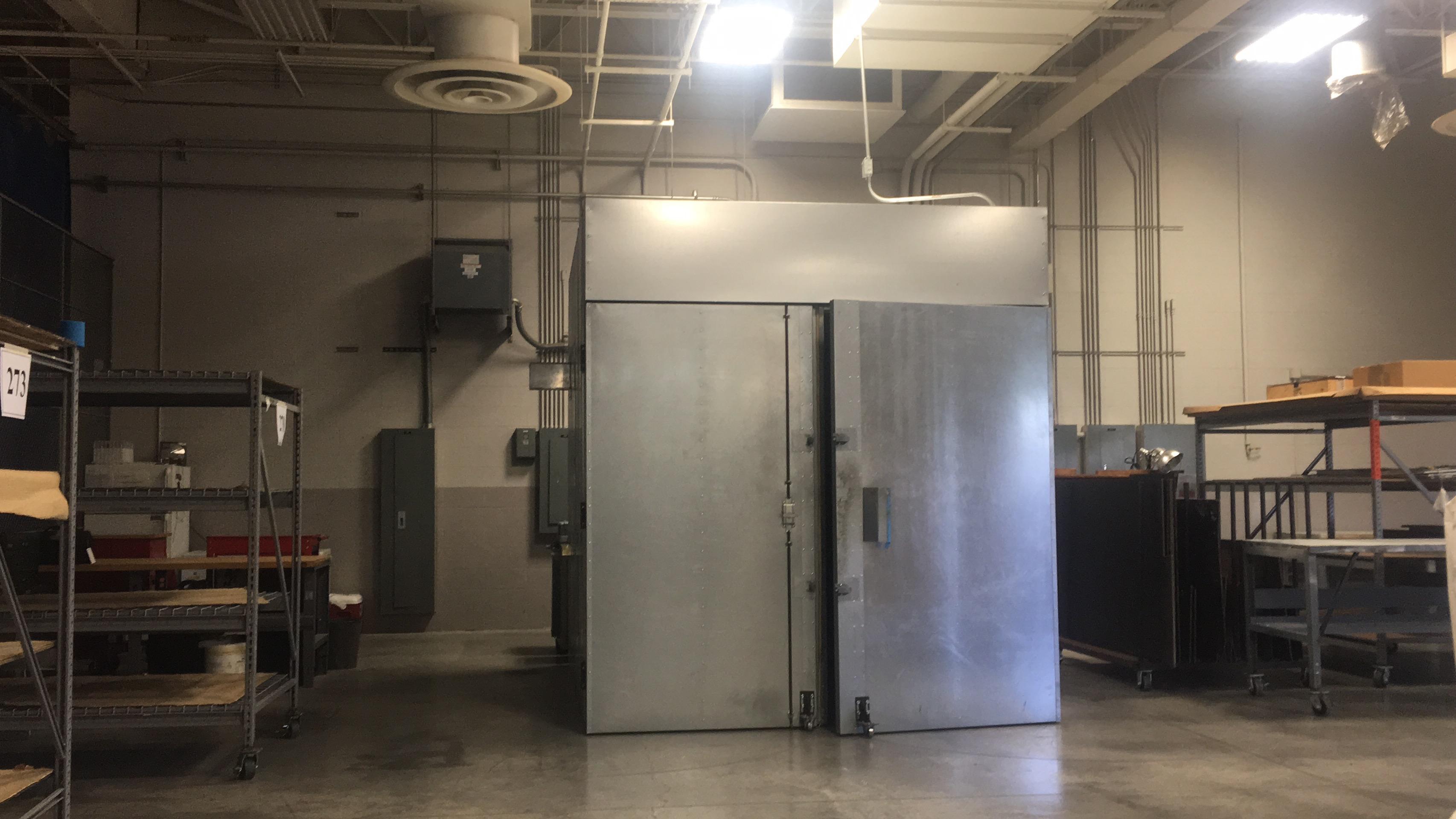 This oven is located in the composite shop, built especially for the facility. After the composites of the components are worked on, the part (if needed) goes into an oven that operates from 400-600F. Then the parts are cooled down slowly, often at 50-deg., 30-min. increments. 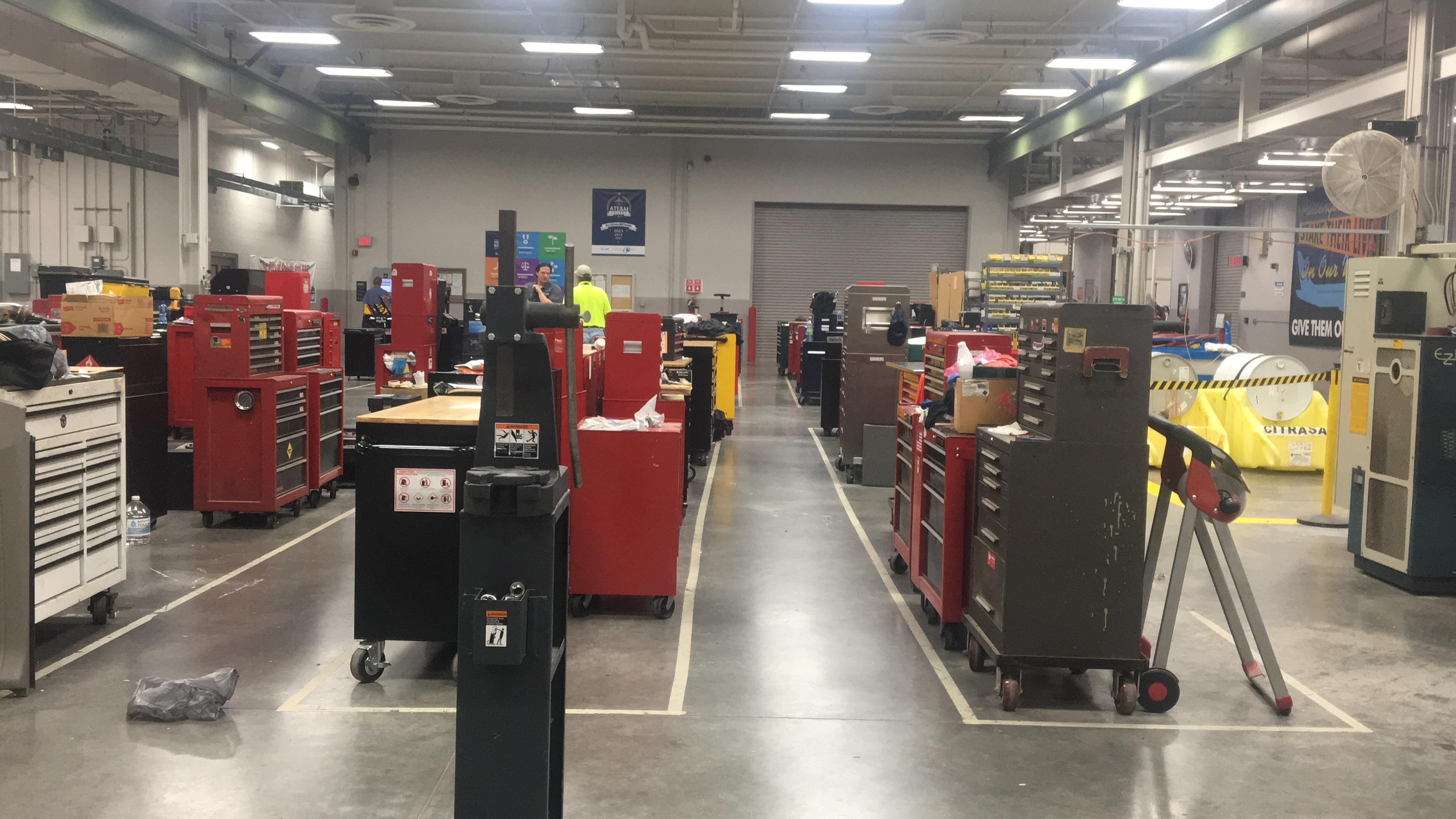 The Shop And The Training

This shop is located behind the hangar and is one of the areas that houses tools and machines for inspecting and repairs.

The facility now has the right mix. “Initially, we had a lot of trouble finding talent and not just because we were a new facility. People would look up there and say, 'Do I want to move up to Duluth? Are they going to stick around?' Now people are looking at us saying, 'Wow, they’ve got this big contract, it’s working, they’re hiring people, people love working there, they’re obviously here to stay,'” says Ketterer.

Currently, the team is seeking 30 A&P (airframe and/or powerplant) mechanics and 10 structural engineers. “The structural mechanic is a little different. Structural is kind of an art, it’s not as much moving and replacing parts. Those [types of skills] are very difficult to find,” says Ketterer.

Big things are happening at AAR's narrowbody aircraft facility in Duluth, Minnesota, which services up to 65 aircraft a year. Take a look at the hangar and shops—and even see a mid-process heavy check on an A319.