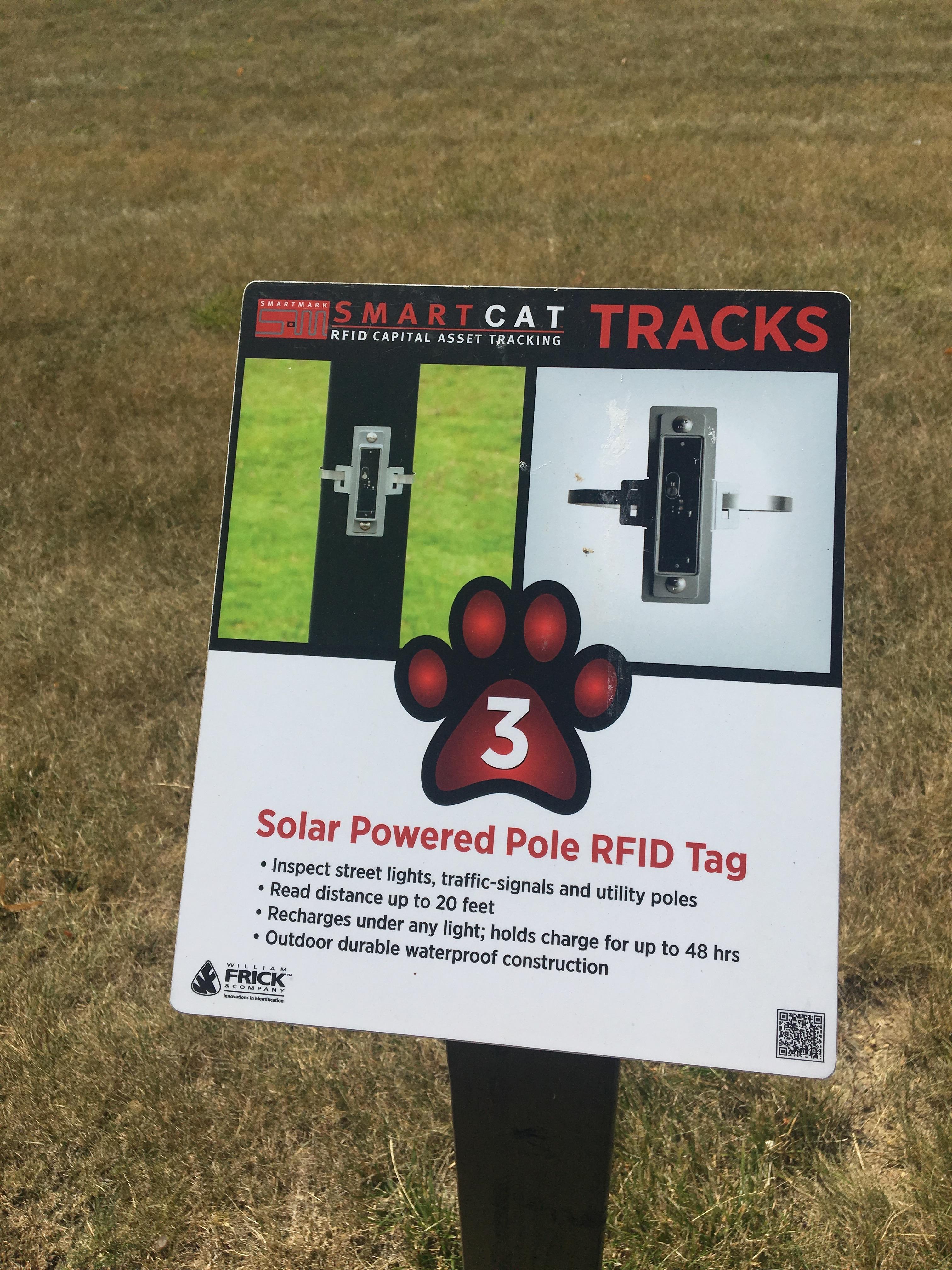 RFID Can Be Everywhere

This sign in the parking lot at William Frick & Co., showcases how RFID (radio-frequency identification) can be placed and used in a lot of ways.

William Frick & Co., located in Libertyville, Illinois, was founded by Bill Frick in 1974. The general aviation pilot and aviation enthusiast started the business in his garage to create a solution for customers from all types of industries that lacked barcode technology or customized printing options.

“[Frick] became involved with barcodes, and his vision was to offer outdoor durable materials that commercial printers would not regularly get involved in. From harsh environment barcodes, over the years, it naturally led into our company’s desire to pursue RFID. We saw it as the next technology making smart labels,” says Evie Bennett, a company vice president.

Now, the company has about a dozen airline customers and several OEM suppliers to the airline industry, including manufacturers of life vests, seats, toilet shrouds and medical kits. 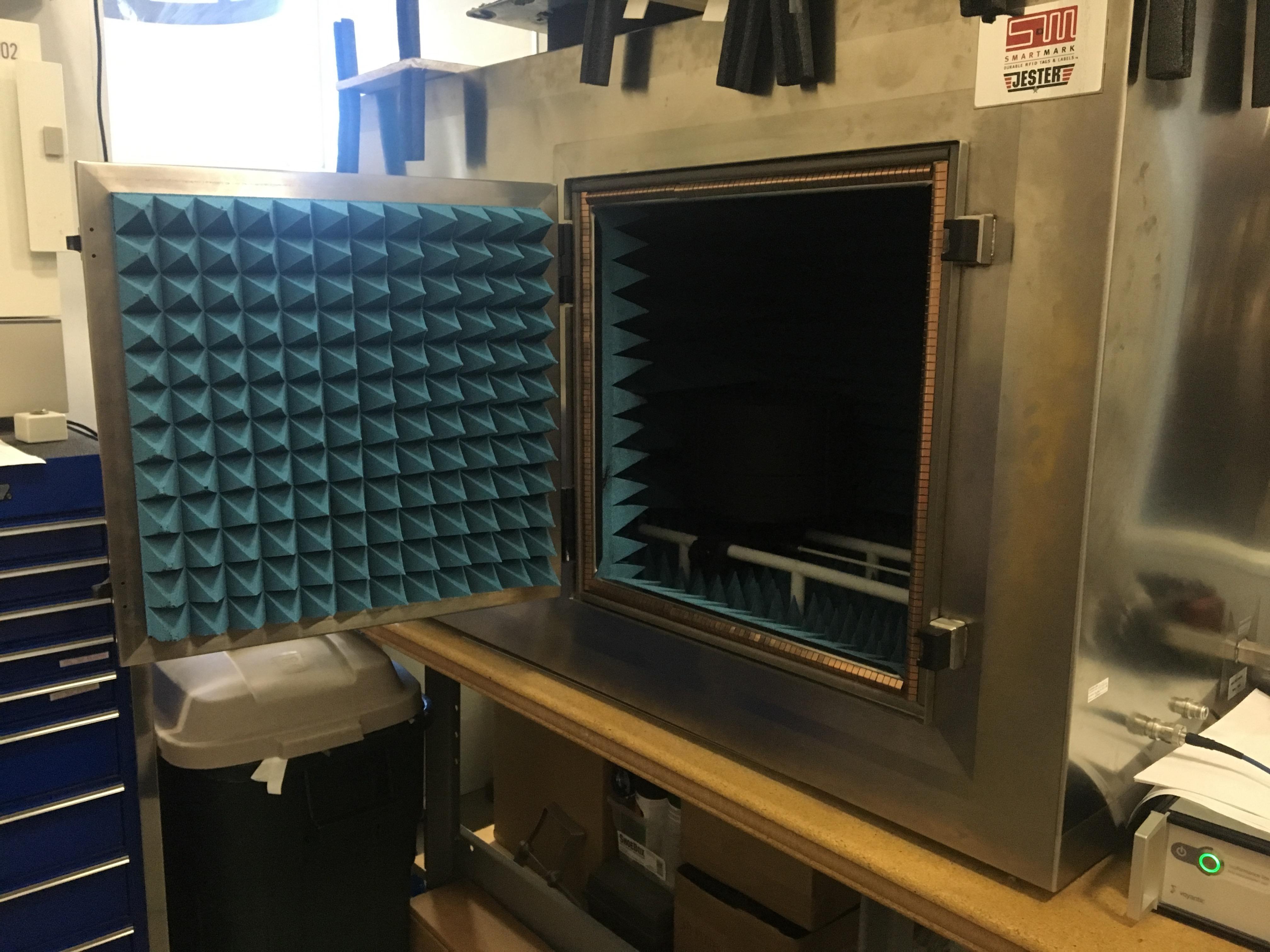 The anechoic RFID chamber helps determine what the potential read range for an RFID chip should be and helps decide why one tag should be used over another. When the RFID chip is applied to certain surfaces, it can change the range. 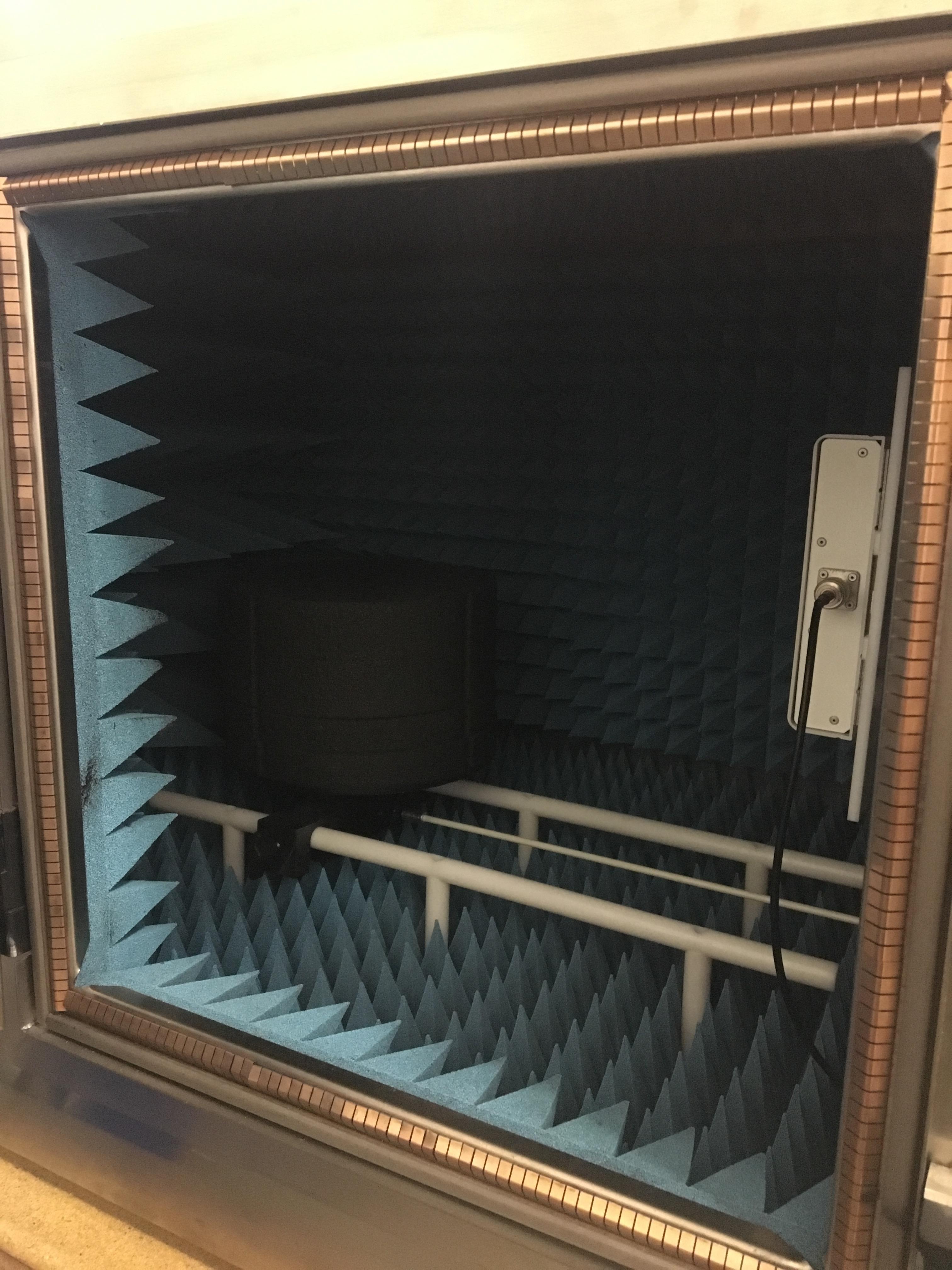 The Chamber Close Up

This chamber also records measurements that can be distributed to the customer for education or proof of testing. The results are compiled for research that can be done by William Frick or given for others to use.

The facility includes two regular printers and three wide-format digital presses that can run projects from 1-1,000 labels. All labels are printed with registration marks, laminated and digitally cut.

The shop includes testing machinery but, as expected, does not include a full airplane to use for testing. “Testing for aviation is not easy. A lot of airplanes are configured differently, and one solution on a security seal may not work for the next,” says Brent Howell, senior business development manager for William Frick & Co. “It needs to be strong enough to survive a flight but weak enough to be broken open.” 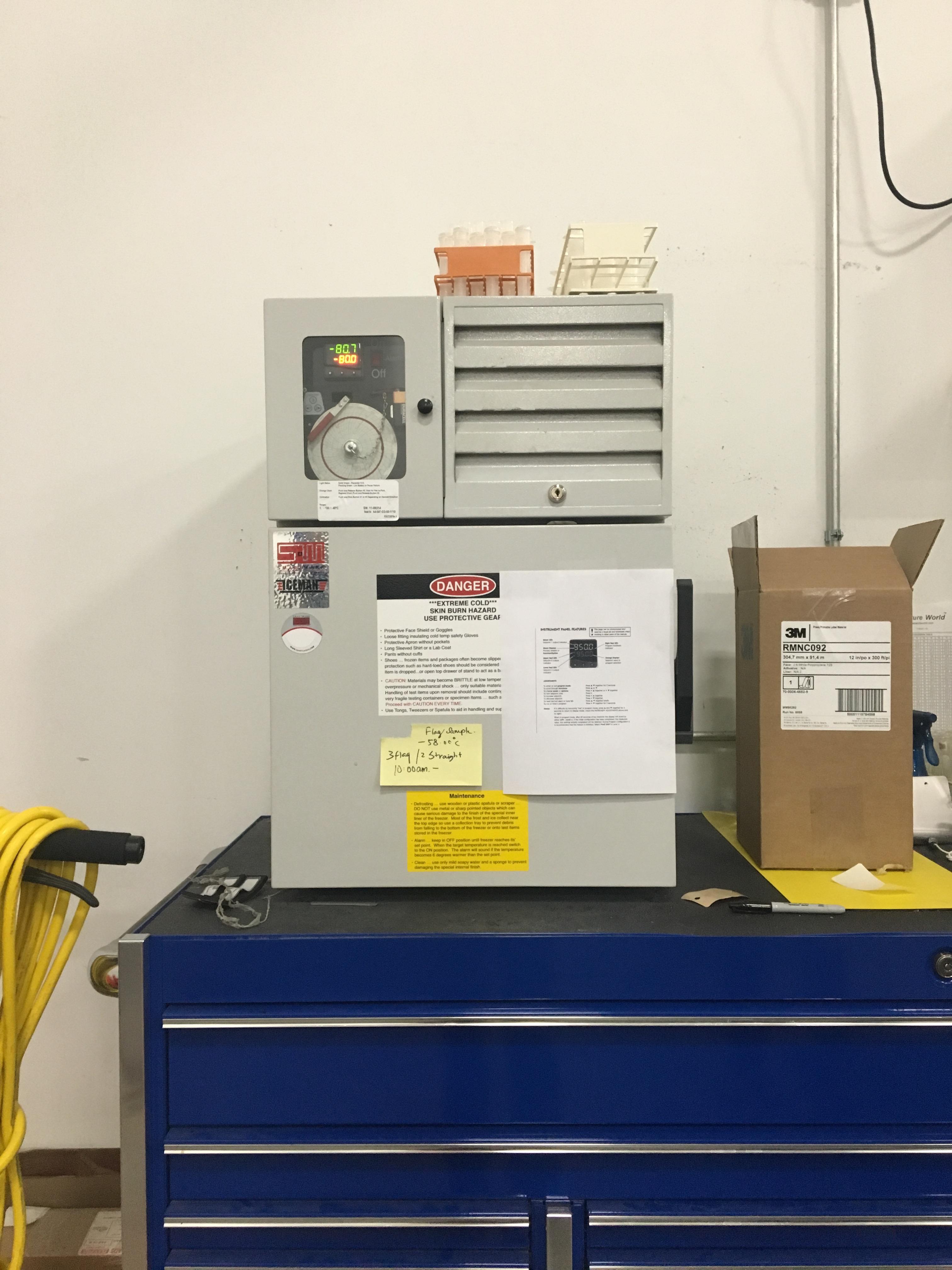 Labels can be tested over time in extremely cold conditions. After the test is complete, pictures or the actual samples can be sent to the customer. Labels for a material that will be exposed to extreme cold or kept in a freezer can be vetted this way. 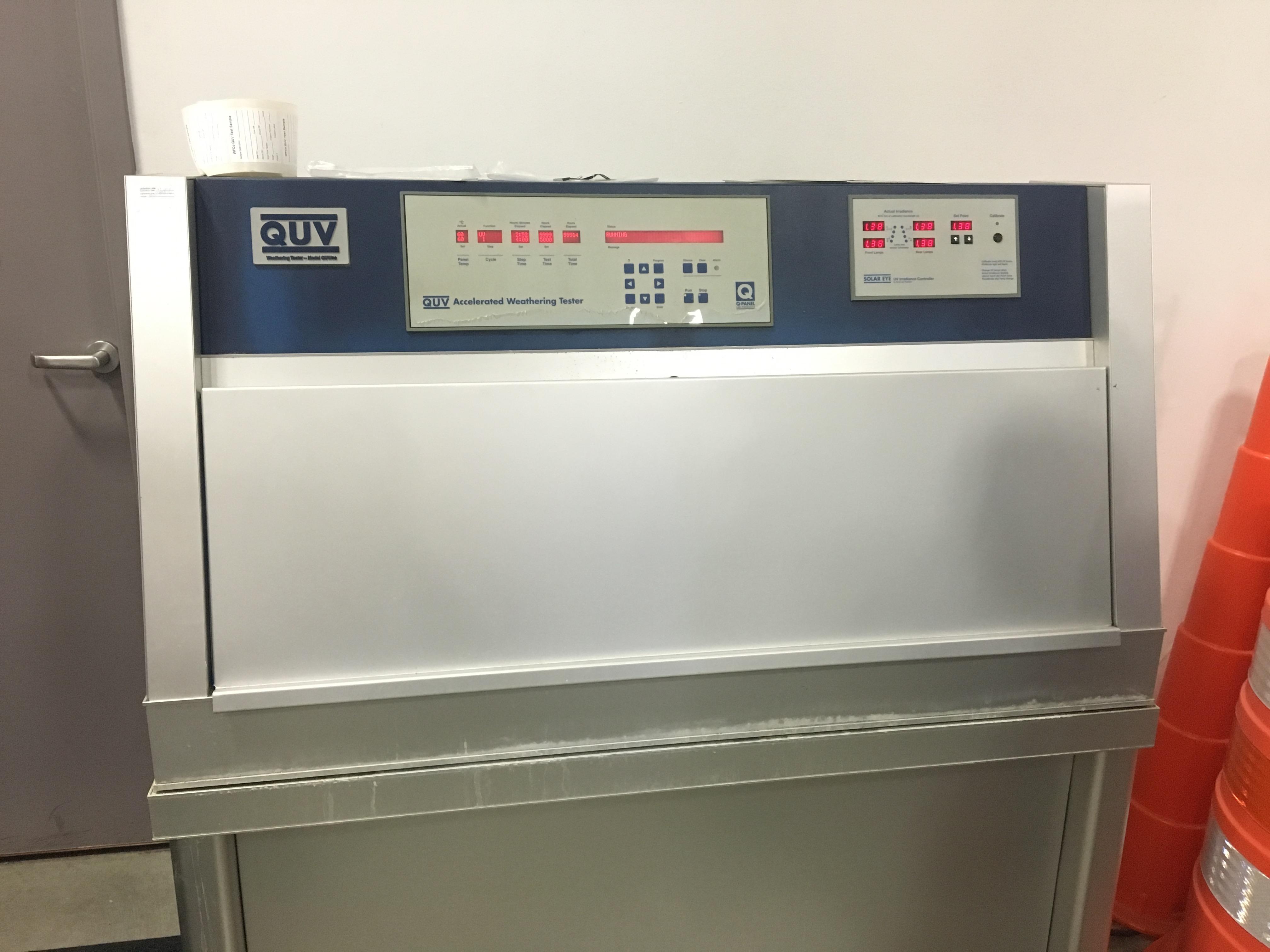 Testing for withstanding extreme conditions needs to be accelerated because testing in real time could take too long: "There are so many different areas of the world where there is no equivalent of what eight months mean, but I’d say eight months in this machine is probably equivalent to 3-4 years outside,” says Howell.

Other technologies that compete with RFID technology include Bluetooth Beacons, which operate on a different frequency; 2-D barcode technology, which is also featured on the label; and standard human-readable identifiers on labels.

So why RFID? “RFID is the evolution of the barcode. It does the same things, but can do them more efficiently,” says Suraj Prakash, a product development engineer for William Frick. Howell says RFID allow storage of more data and better security options. Lastly, barcodes must be close to the reader and only can be scanned one at a time. “By using RFID, you’re able to store data you haven’t been able to before and enhance business practices,” says Howell. 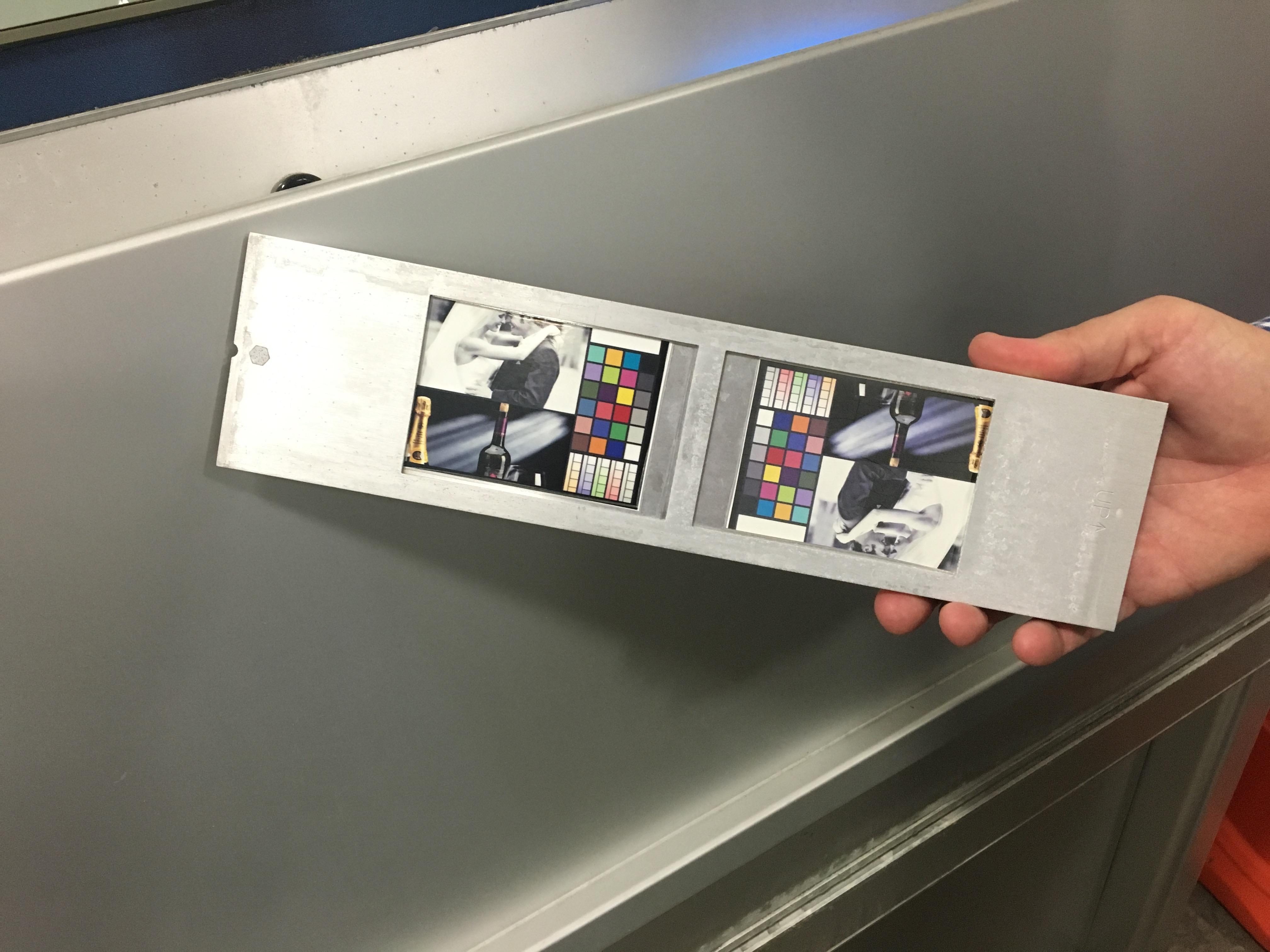 Proof Is In The Light

A sample that’s been tested since December 2015 is displayed. The QUV Accelerated Weathering Chamber is used to comparatively test films, laminates and printing inks to determine outdoor durability. Approval for a label doesn’t just consist of how it will look when applied, but how the label performs under certain conditions such as light and humidity over time.

If the labels have a defect, the material is investigated internally and with the supplier when new material is ordered. 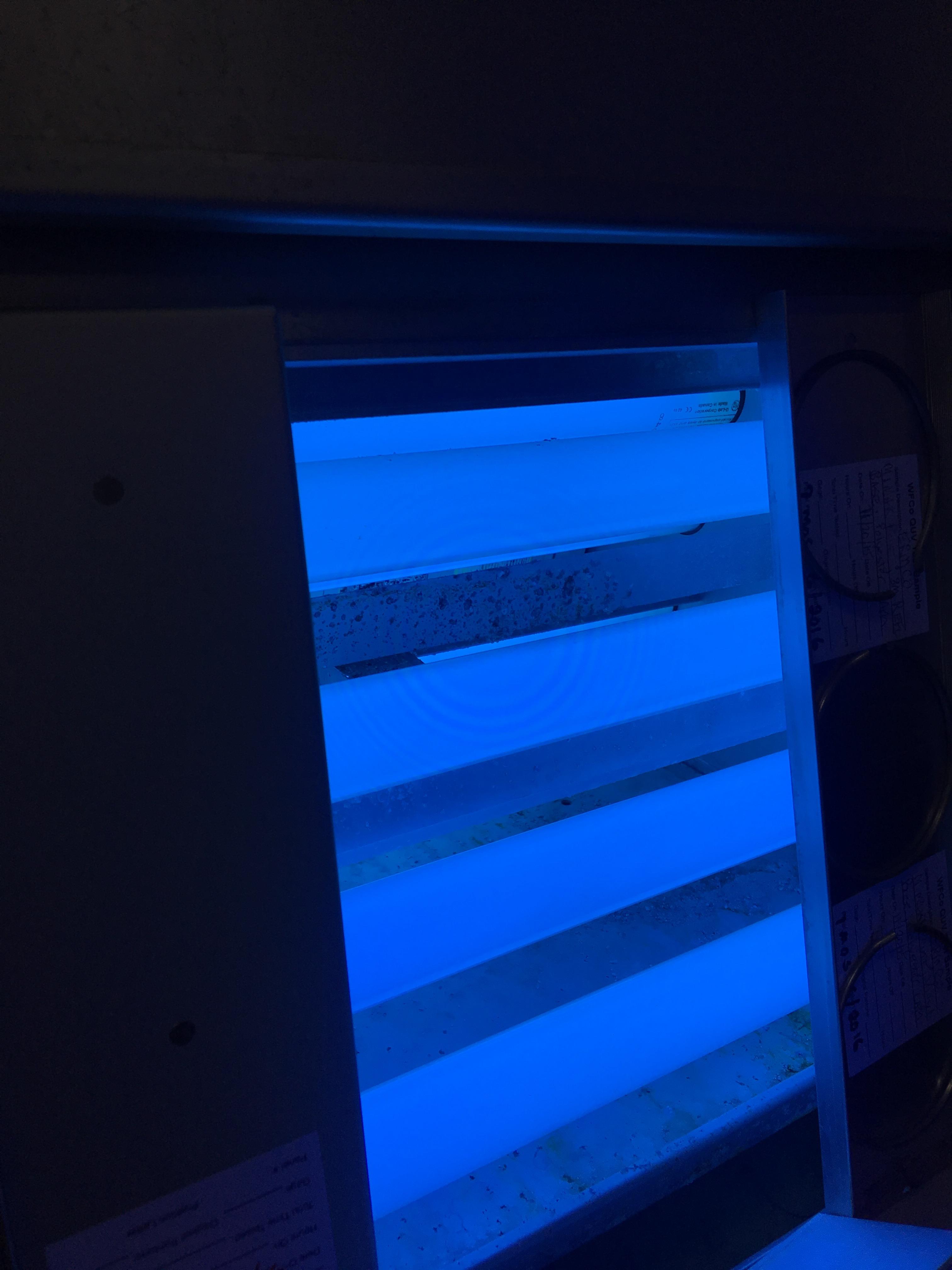 The Specs And Definitions

This view is from inside the QUV Chamber, with the samples facing toward the UV light.

Before delving into the details of the materials, it’s important to define RFID frequencies and the ranges within which UHF (ultra-high frequency) work: 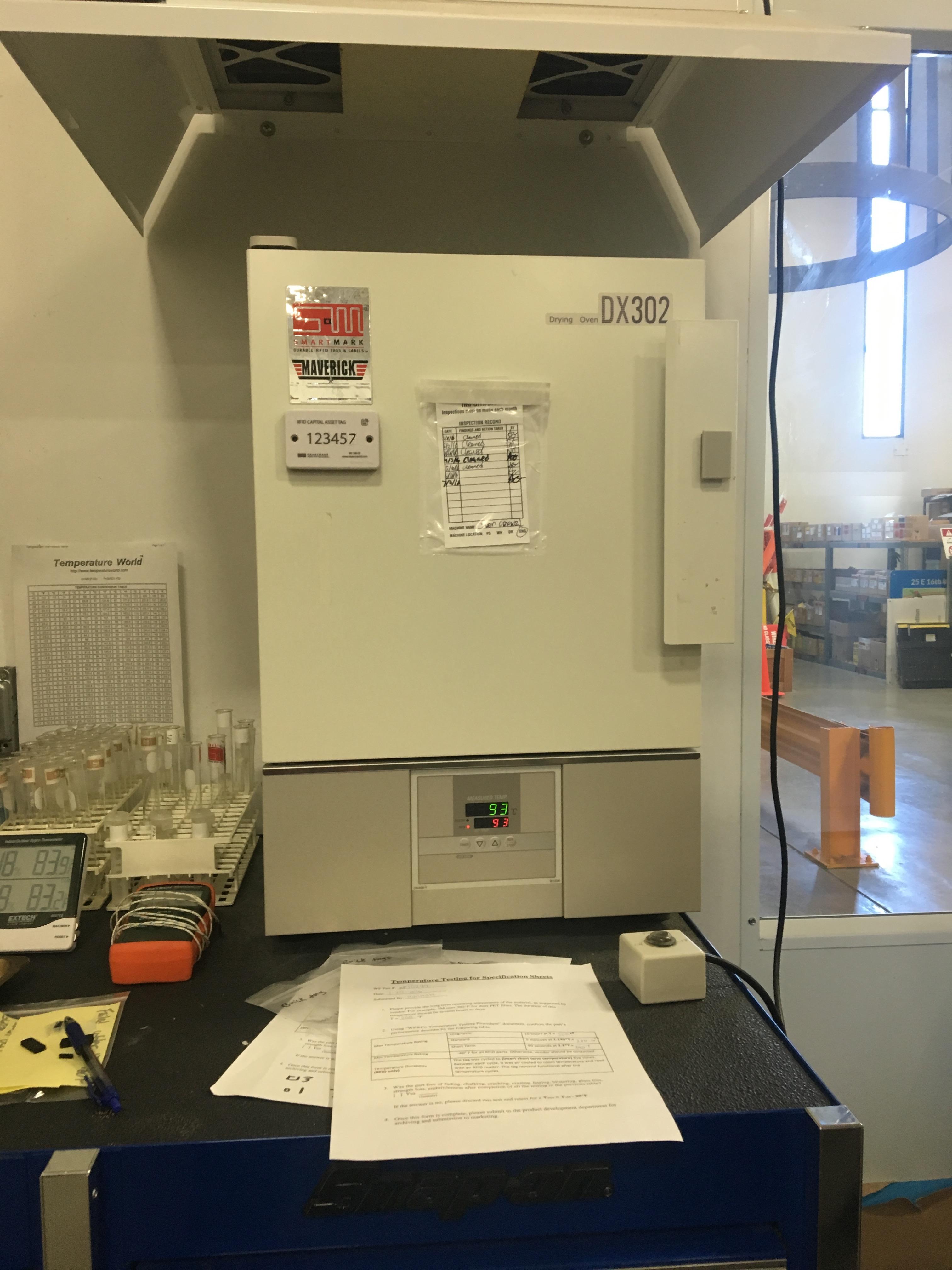 This drying oven provides constant heat to mimic similar environments and ensure the label and chip's performance at that level.

UHF (ultra-high frequency) can experience a lot of interference, especially from metal, water or any high dielectric (a poor conductor of energy) substance. “Basically water absorbs a signal and metal reflects the signal. There are some metal mount tags that can get a farther read range on the inside of an airplane than you would get in a conference room,” says Howell. 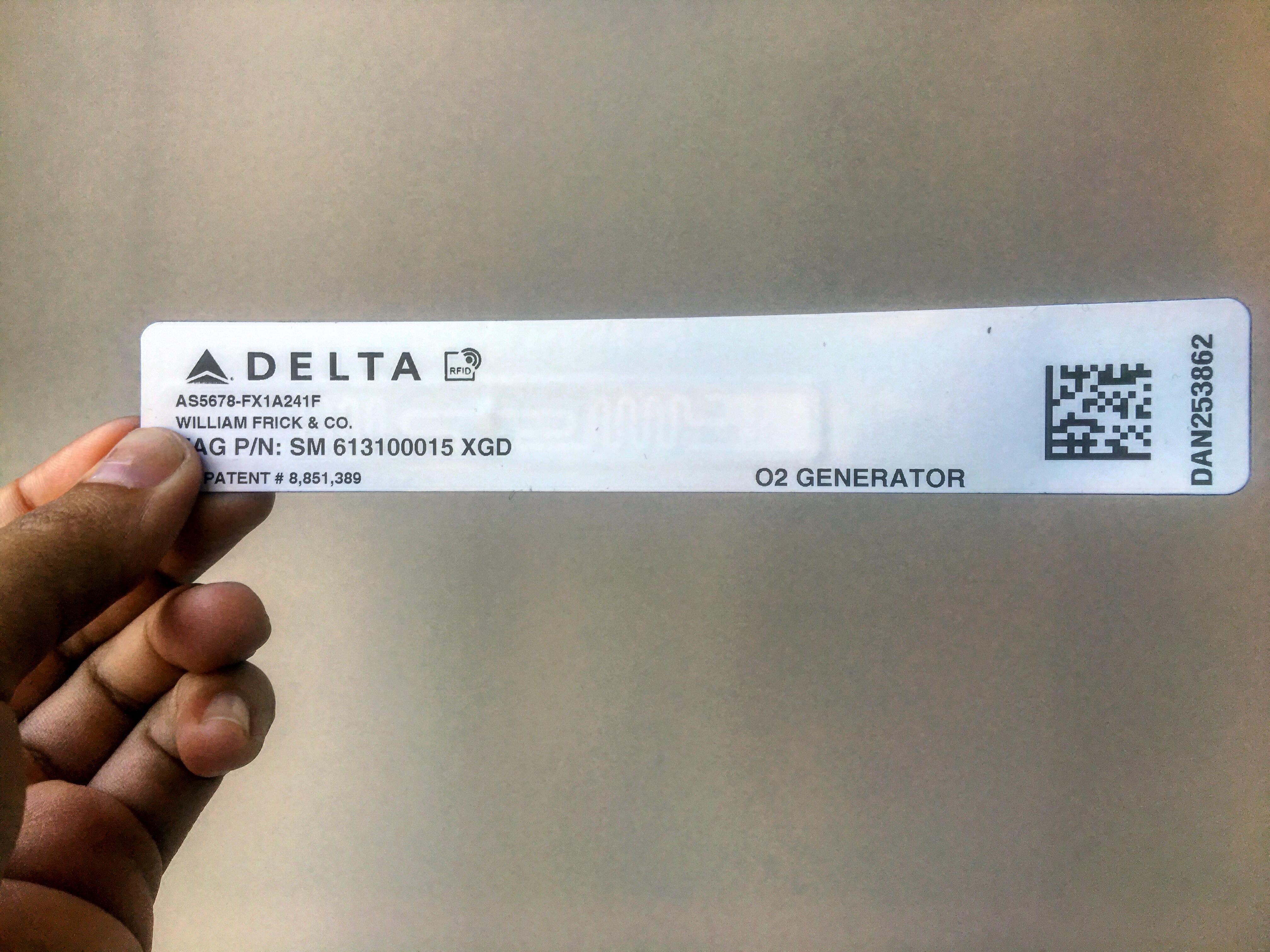 “When Delta Air Lines decided it wanted to tag oxygen generators, they were taking a process that basically took about 13 man-hours every 18 months to physically look for the date of an oxygen generator,” says Howell. For example, with RFID technology, the tag is installed on the oxygen generator, it is assigned an expiration date and the software instantly shows all the tags that will expire within the next six months.

“If nothing needs to be done, then that 13-hr. job became less than 1 min.,” says Howell. This not only saves time during each process, but records the data and assists in reporting, allowing the inspectors to plan better for replacements. Through this, inventory overhead and time spent locating materials is greatly reduced. Howell says that these results have compelled some airlines to adopt the technology. 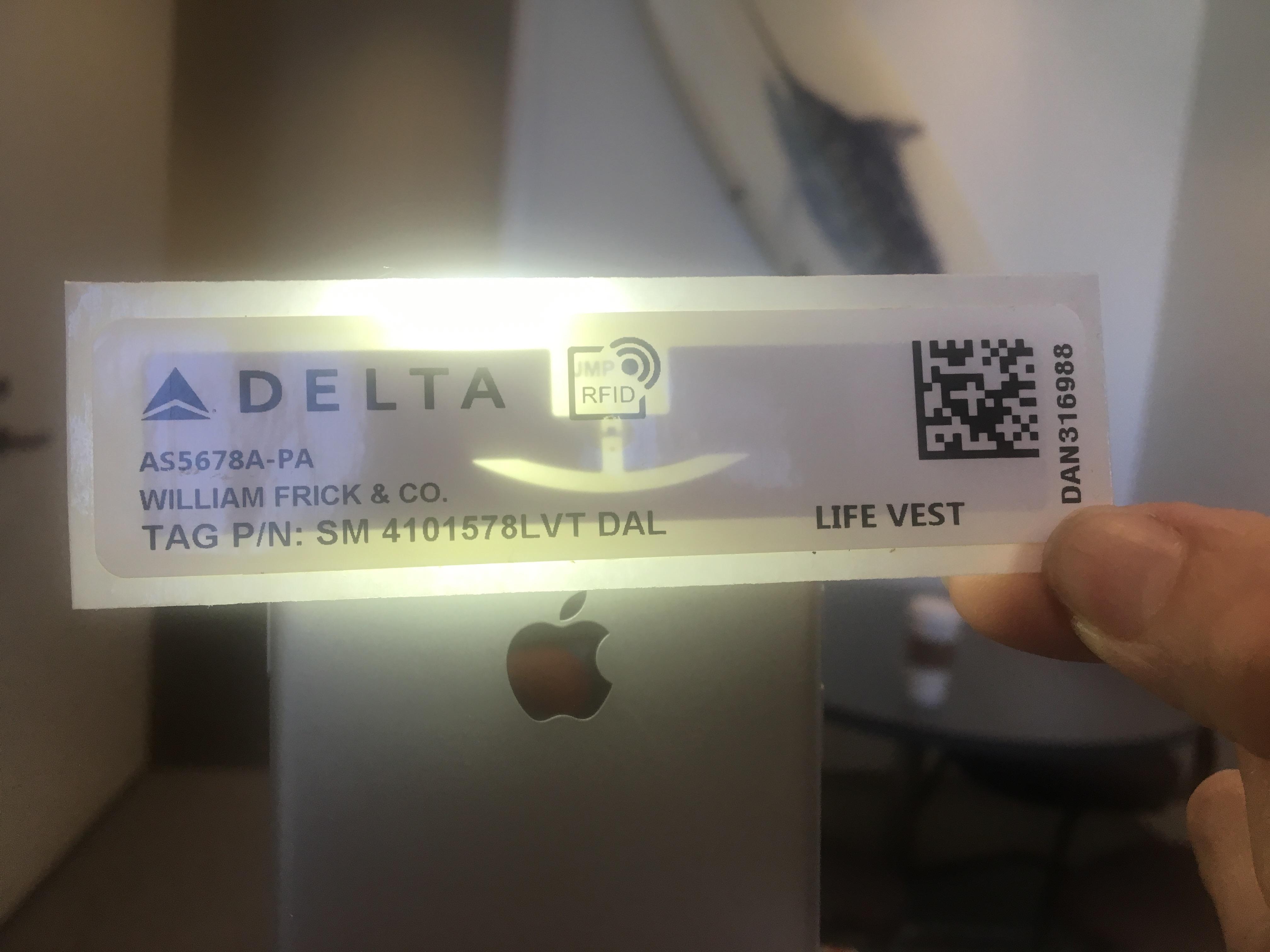 The tags can’t be “one-size-fits-all” regarding the equipment and airlines. But some tags have become more standardized. “This is the life-vest solution. We have a couple of different sizes and memories,” says Howell. Options for each tag change depending on what type of data the customer would like to hold.

RFID technology, originally developed during World War II to identify approaching aircraft during a special mission, can be applied to myriad uses such as parts and tool tracking to address FOD (foreign object damage). Howell says: “Aviation is a big market for RFID tool tracking because if you’re a manufacturer, you have FOD requirements. RFID can help create a trail of who used the tool last, monitor check in/check out and save the data. If a tool goes missing, RFID can help you find it.” 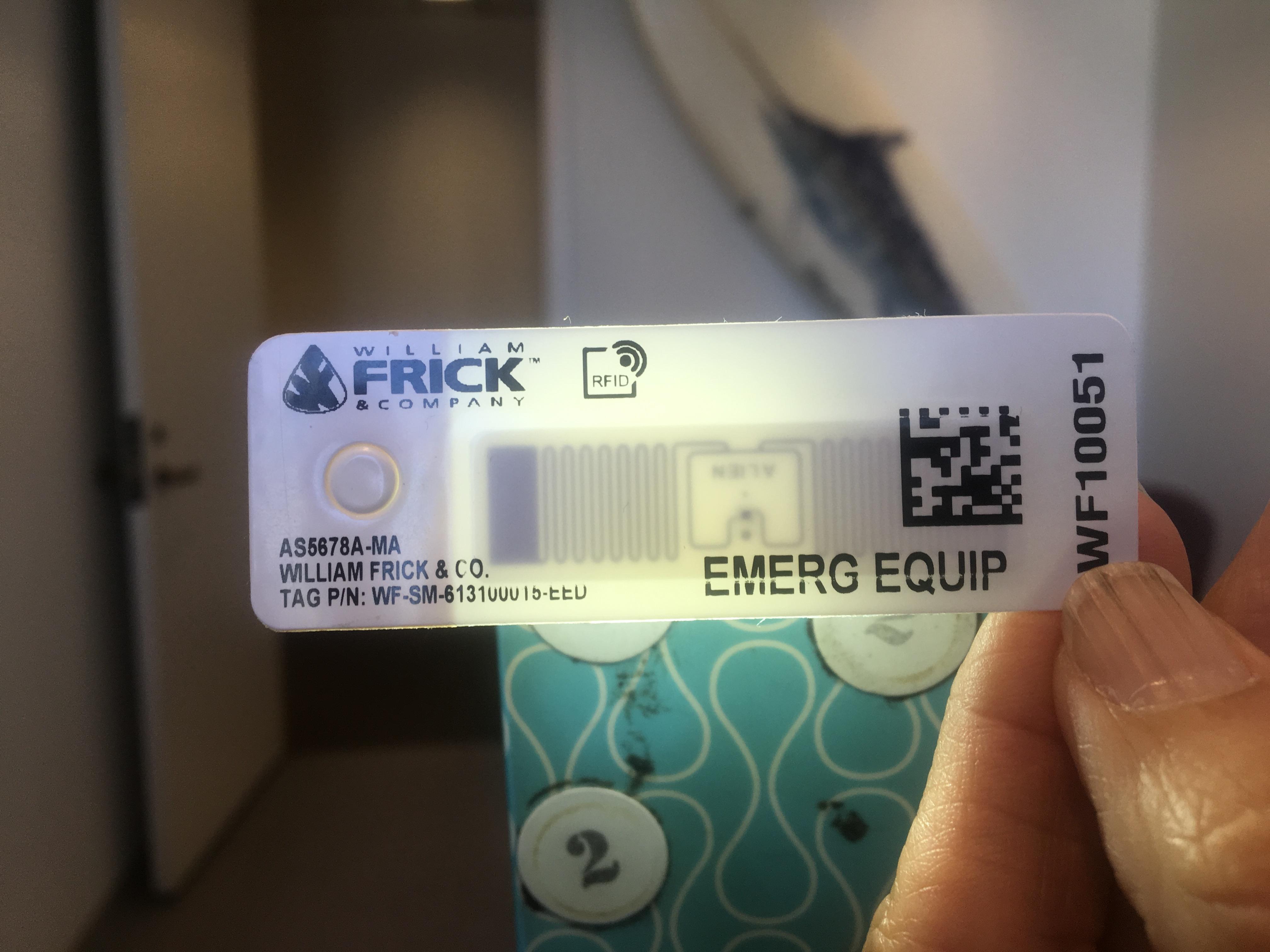 Chip manufacturers design the chips differently, making a chip identifiable by even just the antenna design. The chip is typically made from silicon and metal for the antenna. “The interesting thing about UHF is the antenna can be anything that's conductive. We worked with one company that wanted to make a tag out of conductive rubber, and we were able to prove that that could work,” says Howell.

The data format is ATA (Air Transport Association) Spec 2000 e-business standards. Each tag is encoded with a header that clarifies it is for aerospace and defense, a filter that defines the type of item (life-vest, oxygen generator, etc.), a cage code that identifies the user or manufacturer and a serial number. This standard was later adopted by the RFID community as a whole across many industries. 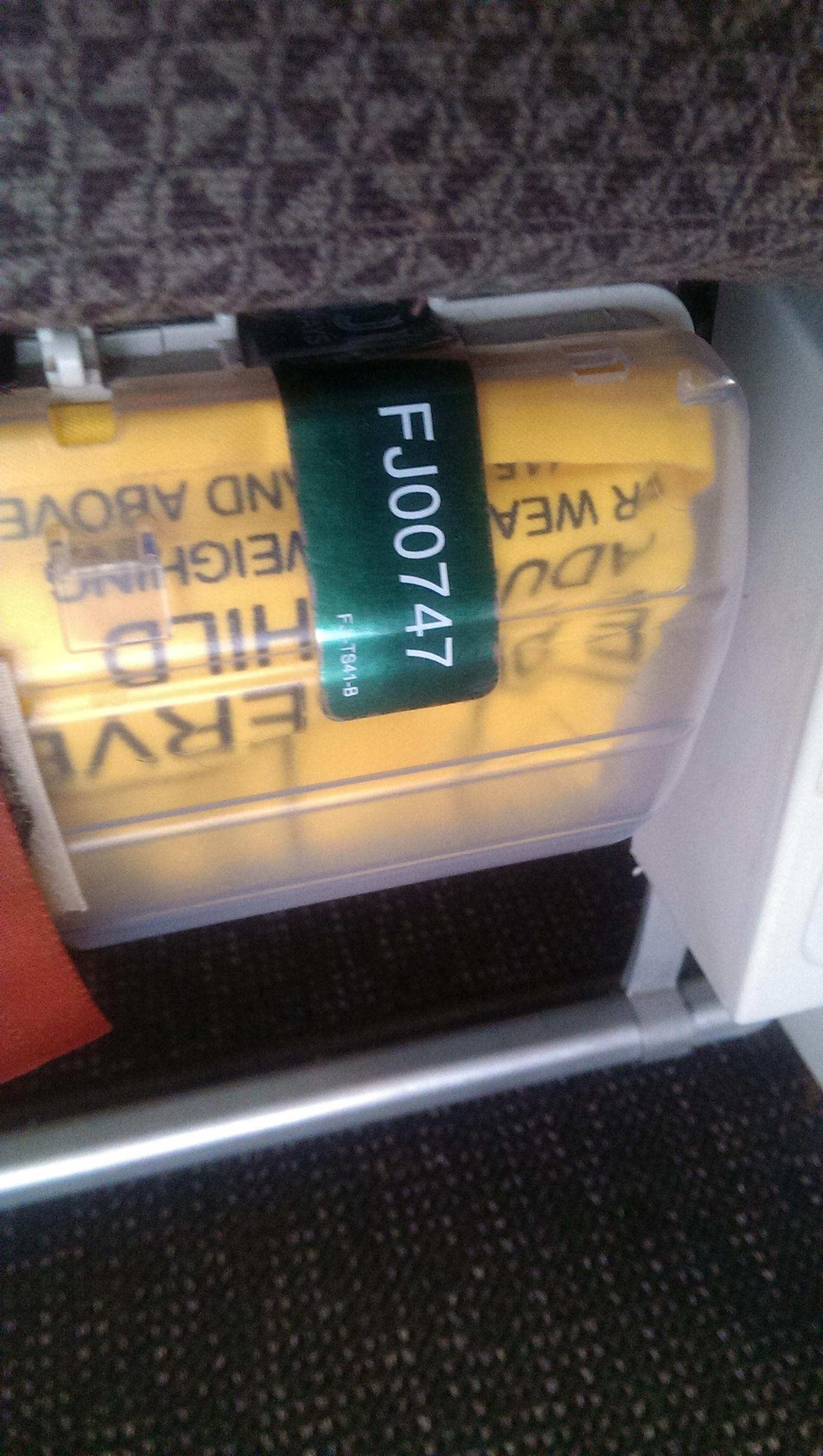 This label is a tamper-seal item. It does not include RFID technology, but instead functions as a visual signal that the seal has been breached.

For security purposes, this technology lies in the adhesive and label itself. In RFID, there are many ways to ensure security, depending on the purpose

Prakash says, “A lot of RFID applications demand some sort of encrypting of data. There is a key that the reader uses in its algorithms to understand what the tag is. Even with UHF, there are security protocols that different readers can be programmed with.” 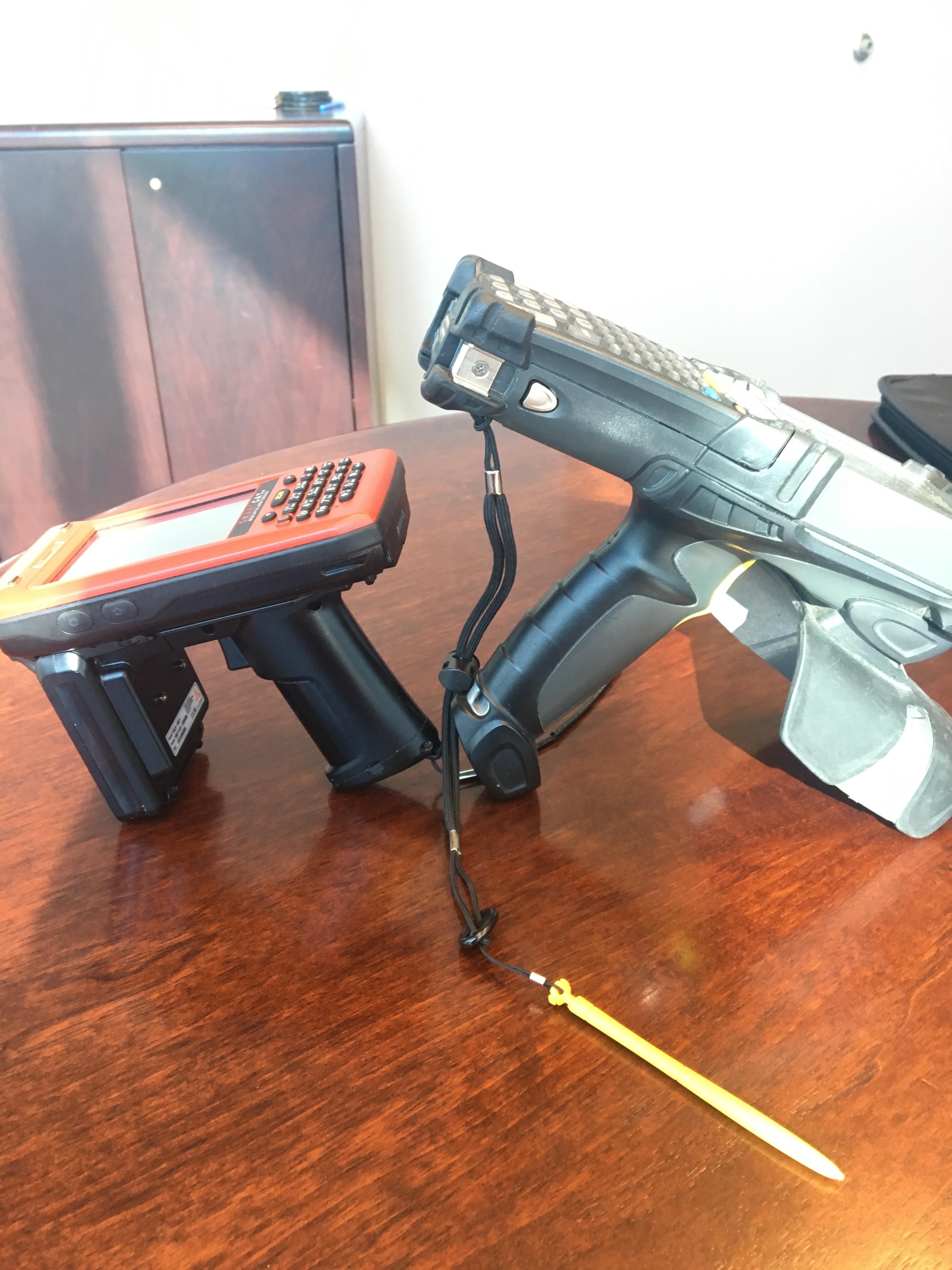 The readers used by airlines look more like a handheld computer with an integrated screen, unlike the ones displayed  here. Like a computer, they’re capable of being connected to Wi-Fi, but also can be set up as cell-based, work offline or be hardwired to the system. Wi-Fi isn’t necessary for the read and information transfer. When the RFID tags are read, it’s essentially a comparison check. “The system is telling them what’s supposed to be there, and by pulling the trigger, what's there is being confirmed,” says Howell.

The reader can be GPS-enabled, typically used for outdoor use, such as on delivery trucks. For tracking airline parts, the location assignment works differently. Each piece of equipment is assigned a seat number and, when tagged and read, it displays within the software with that assignment. 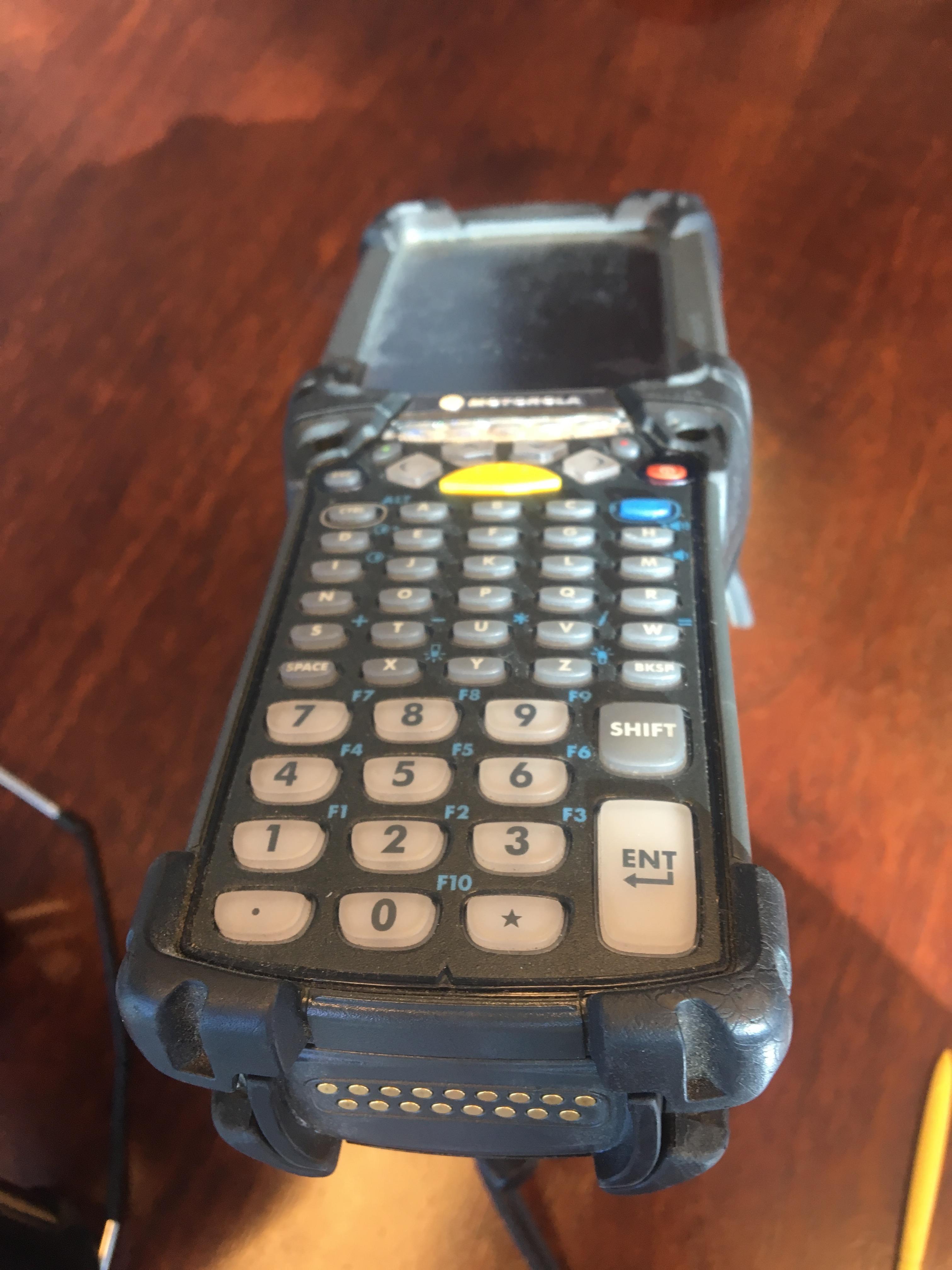 Delta has the most tags on its fleet—nearly 1,000 tags on one Boeing 777. “They definitely have a lot of tags flying,” says Howell. “They're the first to really utilize RFID for in-cabin asset tracking and utilize it in a lot of different ways. They've been very willing to collaborate and share their experience with different industry working groups focused on this technology," he says.

In case you were wondering, William Frick & Co. did not complete the tracking for Delta’s new baggage tracking.

What was once a 13-hr. process to make sure all of the safety equipment hadn't expired now takes 1 min. and a click of a button. William Frick & Co. gave a tour of its facilities and broke down how RFID technology has revolutionized the airline industry.