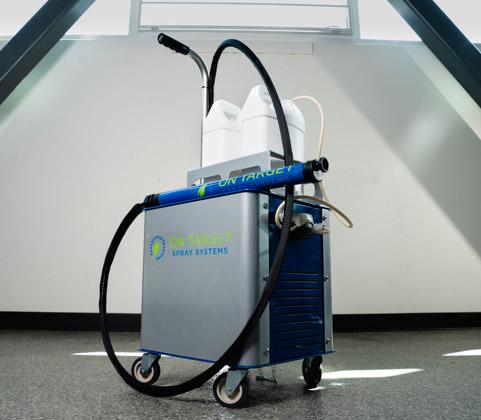 On Target Spray Systems
The On Target Spray Systems Electrostatic Cart uses electrostatic ionization to deliver a uniform, wraparound layer of disinfectants on surfaces. The roller cart features a spray stick supply hose, four roller swivel wheels, a tank mount for sizes ranging from 32 oz. to 128 oz. and robust air compressors designed to disinfect any aircraft cabin interior or exterior. On Target says its wraparound technology is three times faster than fogging and provides uniform coverage of all surfaces. On Target, which previously focused on electrostatic spray technology for agriculture, has moved into other industries following COVID-19 related demand and the Electrostatic Cart is now being distributed by AFI KLM E&M subsidiary Barfield. 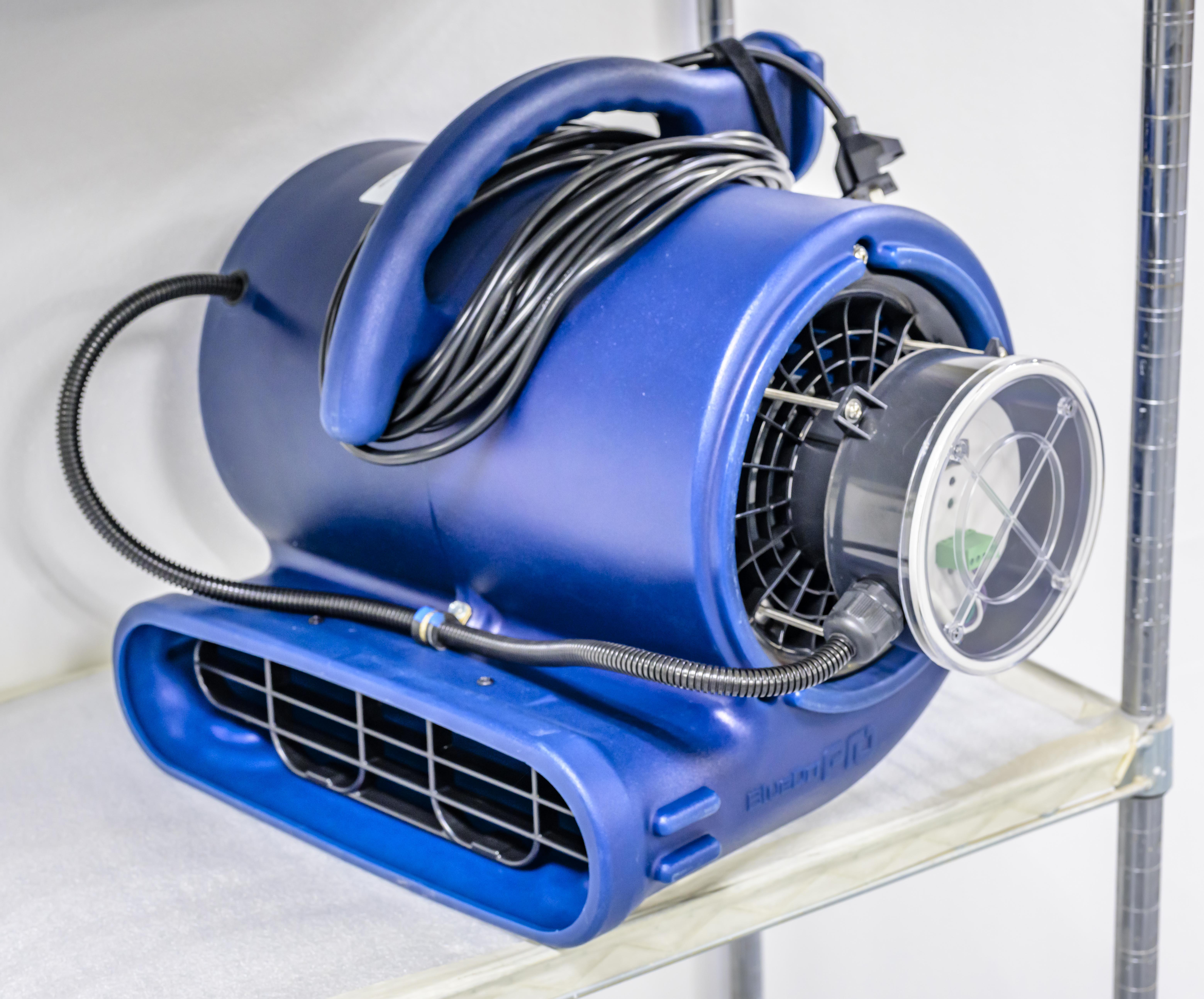 Aviation Clean Air
Aviation Clean Air’s (ACA) Ionization Purification System is being offered as a portable device to proactively disinfect aircraft interiors on the ground. The Ion Distribution Unit uses portable electric-powered ionization and an air blower unit that is placed on the floor of the cabin to kill pathogens and purify the air and surfaces. The technology works through the electronic creation of positive and negative ions, which form hydrogen and oxygen molecules in water vapor present in the air to inactivate airborne and surface viruses. The process takes approximately 1-2 hr. and ACA says the Ion Distribution Unit eliminates the quarantine requirement currently in place at many OEM aircraft maintenance facilities. The system uses no chemicals and ACA says it produces no harmful emissions. The company says benefits include preventing damage to fabric or carpeting while reducing downtime and personnel required to conduct a thorough disinfection. 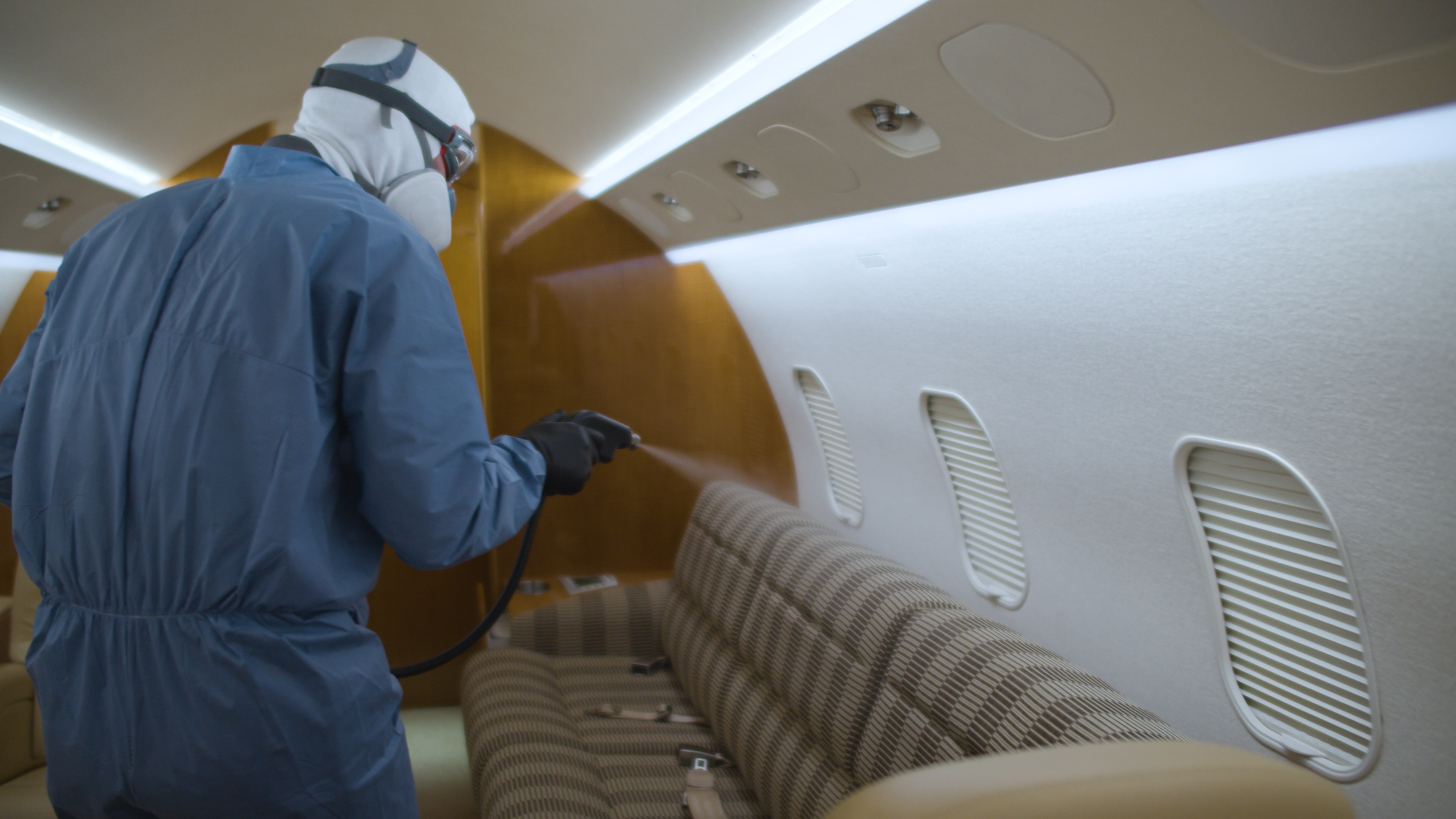 Duncan Aviation
The AeroClave RDS 3110 is a portable, hospital-grade decontamination system that can be used to rapidly decontaminate commercial and military aircraft, vehicles, facilities and equipment. The system can be operated hands-free in an aerosolized application mode for room decontamination or hand-applied using the AeroClave Portable Applicator to treat spaces up to 5,000 cu. ft. (multiple units can be used for larger spaces). According to AeroClave, the system is environmentally friendly and non-corrosive, so it is safe for use on custom surfaces and avionics found in business aircraft. Duncan Aviation has started implementing aircraft disinfection using the AeroClave RDS 3110 at its MRO facilities in Battle Creek, Michigan; Lincoln, Nebraska and Provo, Utah. 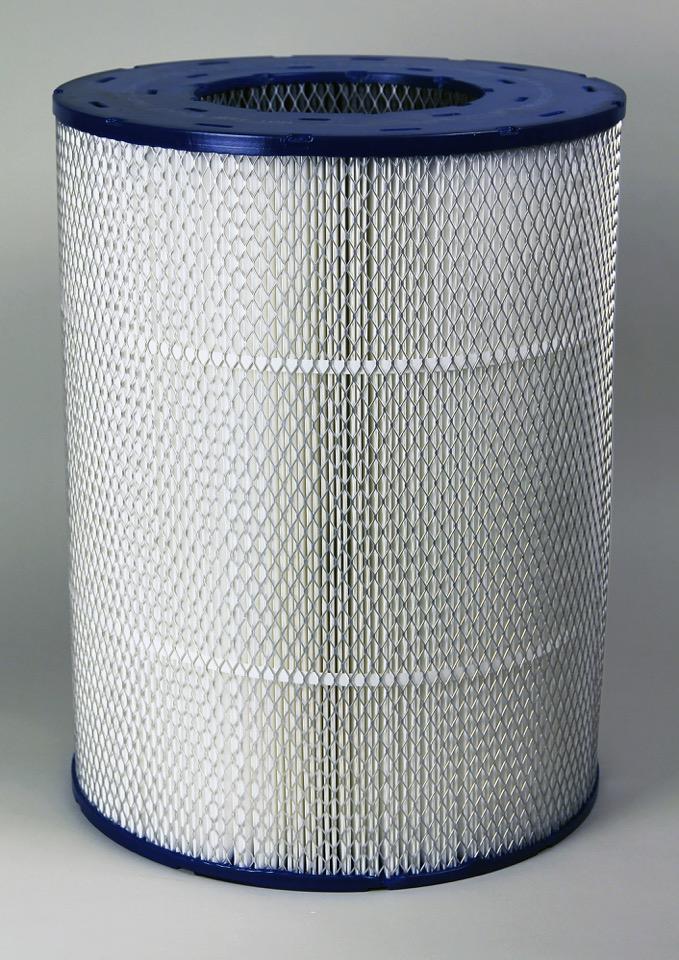 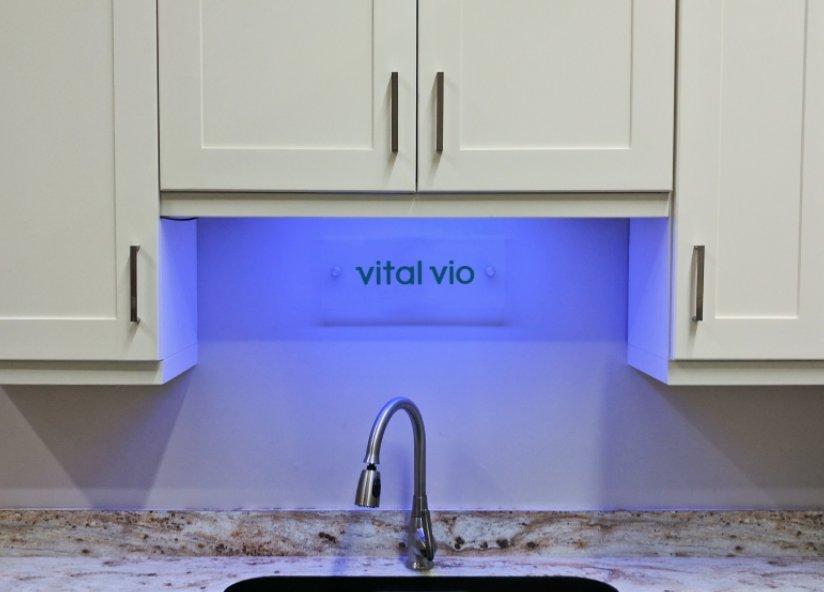 Vital Vio
Healthcare solutions company Vital Vio provides antimicrobial LEDs that provide continuous sanitizing that targets only germs instead of human cells, so they can be used to continuously sanitize spaces. The company started out in industries such as healthcare and food processing, but recently moved into the aviation space through a partnership with Delta Air Lines. Vital Vio is working with the carrier through its hangar innovation center to test the technology on aircraft. According to Vital Vio, the testing entails replacing existing lights over the lavatory sink with its proprietary LEDs—however, the technology can be used in other areas of the aircraft as well. 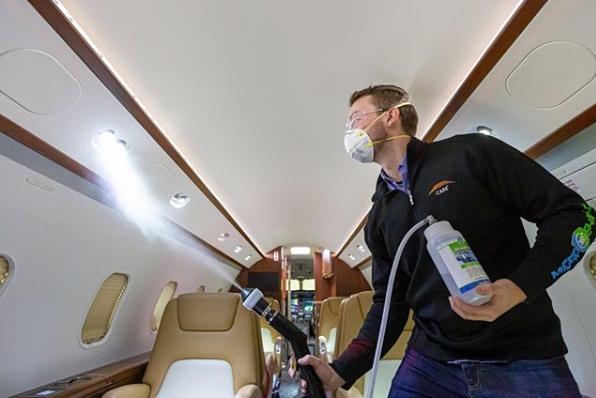 Constant Aviation
MicroShield 360 is a nontoxic, anti-microbial coating used within a variety of industries including aerospace to reduce contamination of viruses, bacteria, mold and mildew, algae, yeast, fungi and odors. The coating features specialized bonding and suspension agents that provide a protective layer on aircraft surfaces. Microshield 360’s three-step treatment entails initial disinfection using an electrostatic process, application of a disinfectant formula that air-dries within minutes and the addition of the coating, which prevents pathogens from living on surfaces for up to a year. According to MicroShield 360, the entire process takes around an hour for a midsized business jet. Cleveland-based MRO Constant Aviation says it has been “swamped” with requests to apply the product, and it was recently hired by Flexjet to treat its entire fleet of more than 160 aircraft. 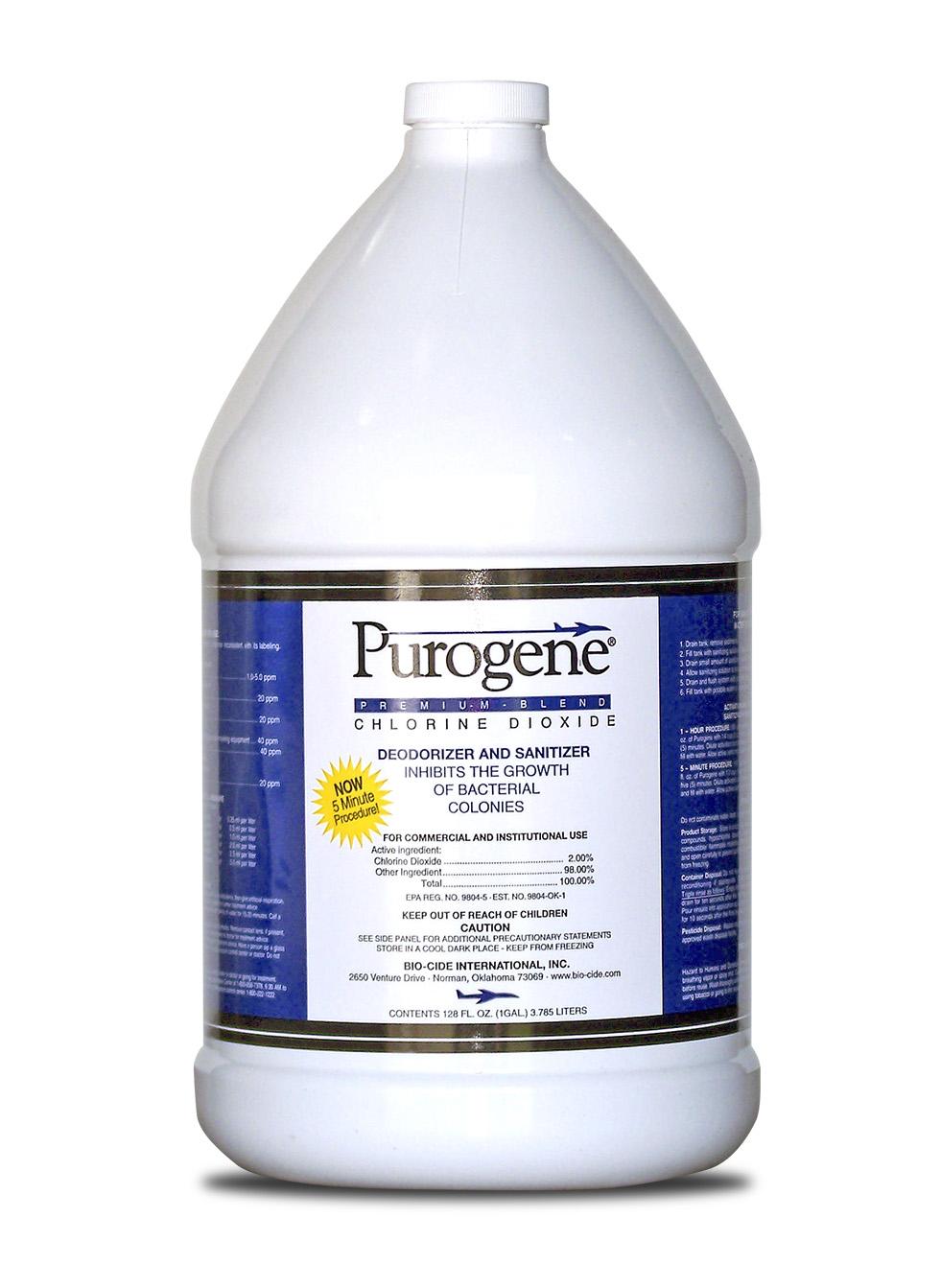 AeroSafe
AeroSafe’s Purogene is a certified organic, broad-spectrum antimicrobial that kills bacteria, fungi and viruses via oxidation. AeroSafe says the product, which is used to sanitize potable water and water systems on aircraft, prevents sludge and organic buildup in lavatory systems. According to the company, Purogene is approved for use by most major airframe manufacturers and used by major airlines. Boeing uses the product to sanitize potable water systems before aircraft leave the assembly line. 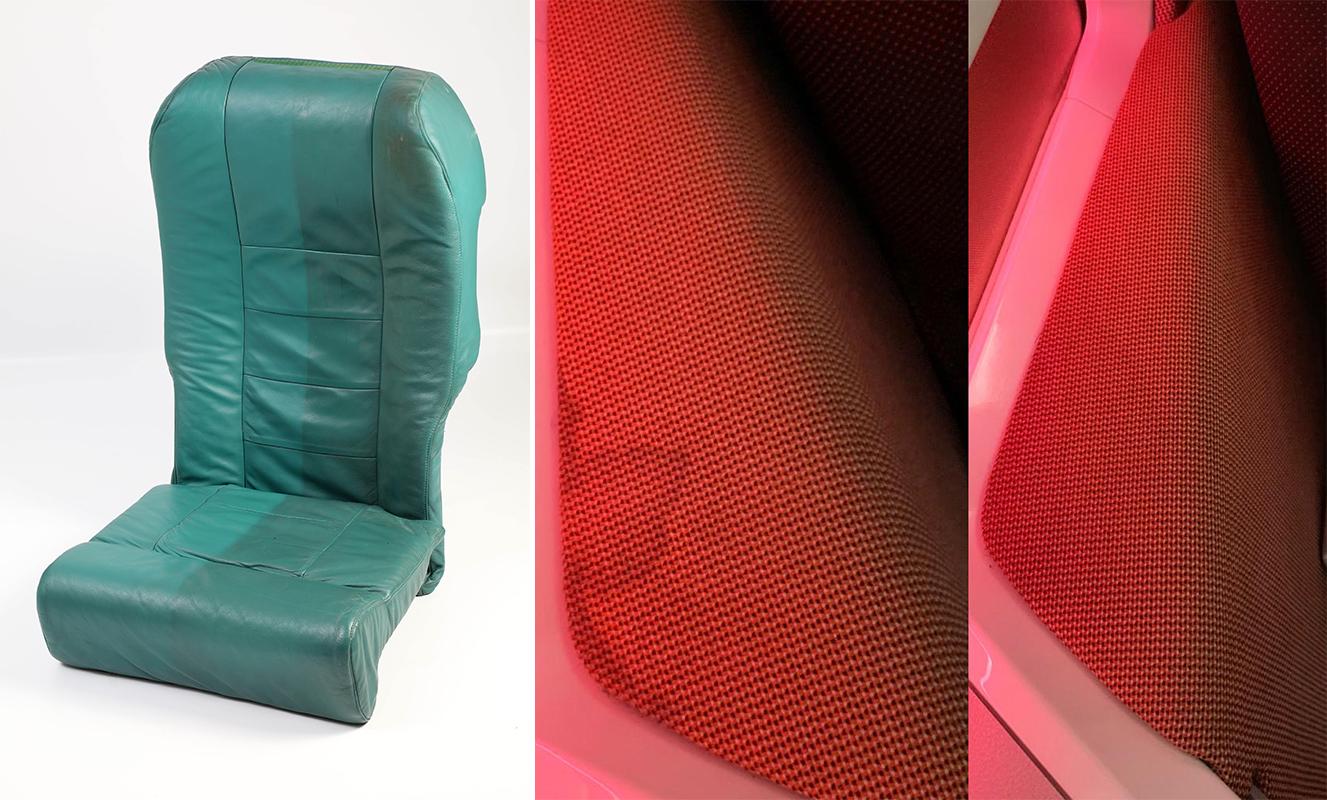 Flitetec
Flitetec has just launched a new water-based antibacterial cleaner for soft furnishings, leather and plastics. While MX14 Aero was originally developed to remove ink and stain marks from leather and soft cabin furnishings, Flitetec says it can also be used on interior parts such as plastic in galleys, seats and lavatories. The product has achieved EN1040 certification for its antibacterial qualities and Flitetec says it is the only cleaner in the industry to be 100% biodegradable with no chlorines, bleaches or solvents. 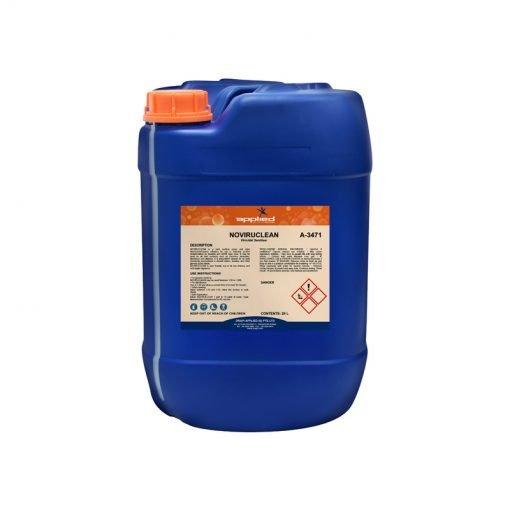 Orapi Group
Noviruclean is an ultra-broad spectrum viricidal, bactericidal and yeasticidal spray and wipe disinfectant cleaner that can be used on surfaces within the aircraft cabin such as tabletops, galleys and lavatories. According to manufacturer Orapi Group, the product is effective against coronavirus, Severe Acute Respiratory System (SARS), MERS, Influenza A and surrogates. The product can be applied via spray and wipe or soaking and fogging methods and requires no rinsing after use. 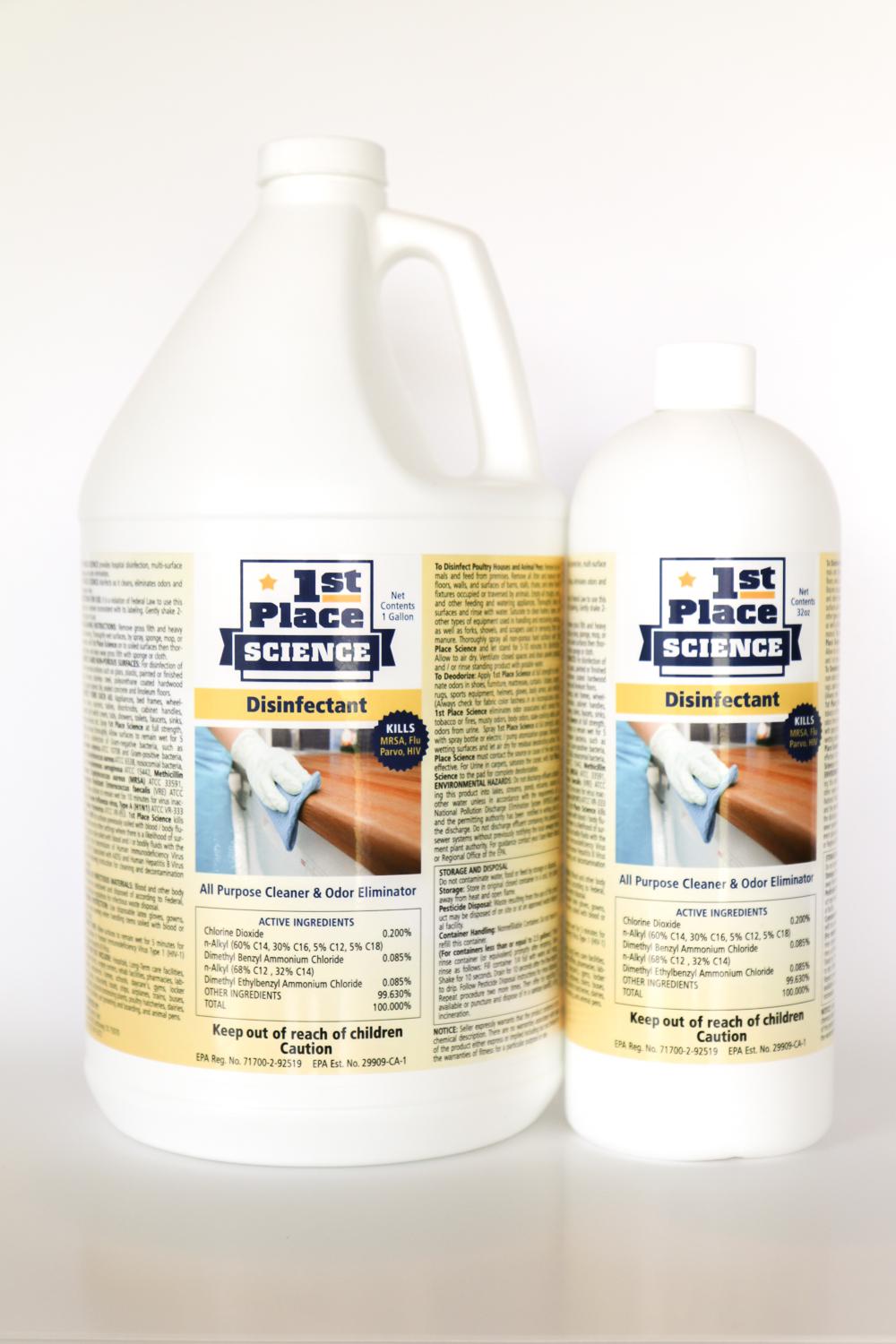 First Place Science
First Place Science has launched a chlorine dioxide-based disinfectant cleaner that kills pathogens and biofilm at the cellular level with what it says is 99.999% efficacy. The disinfectant holds EPA category 4 approval and is nontoxic and hypoallergenic, so it does not require protective clothing or equipment while being applied. The disinfectant is non-corrosive, non-flammable and can be applied with an electrostatic sprayer to get into crevices, cracks and air ducts, which makes it particularly effective for the aviation industry. According to First Place Science, the product is used across a variety of industries and is currently being used by carriers such as American Airlines and El Al to disinfect aircraft cabins.

A look at products used to disinfect and remove pathogens from aircraft cabin surfaces, air and water. Visit MRO Links for more information about products to protect aircraft cabins from pathogens.