The Next Evolution In The 3D Printing Revolution 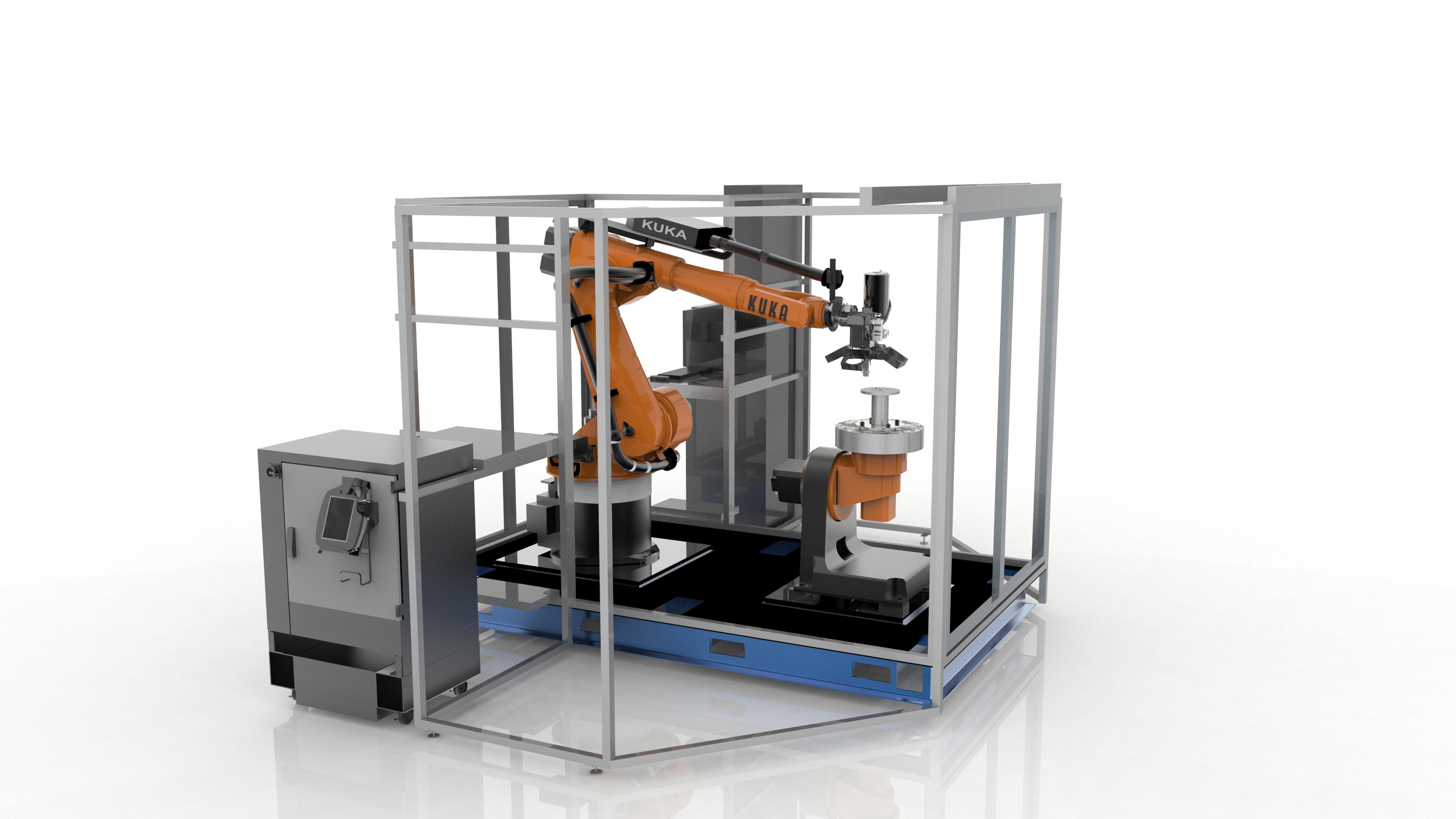 3D printing has already revolutionized the manufacturing industry by turning supply chains and production speed on its head. These two new advancements in additive manufacturing will likely spur increased adoption of the technology in the aviation and automotive industry, with the likes of Boeing and Ford Motor Co., which provided input on potential machine applications.

The Robotic Composite 3D Demonstrator and the Infinite-Build 3D Demonstrator were announced at the Stratasys media event Aug 23. These two printers provide capabilities not yet seen in additive manufacturing--increased production speed, limitless length of the end product and rotating design growth versus a traditional lateral build with composites. 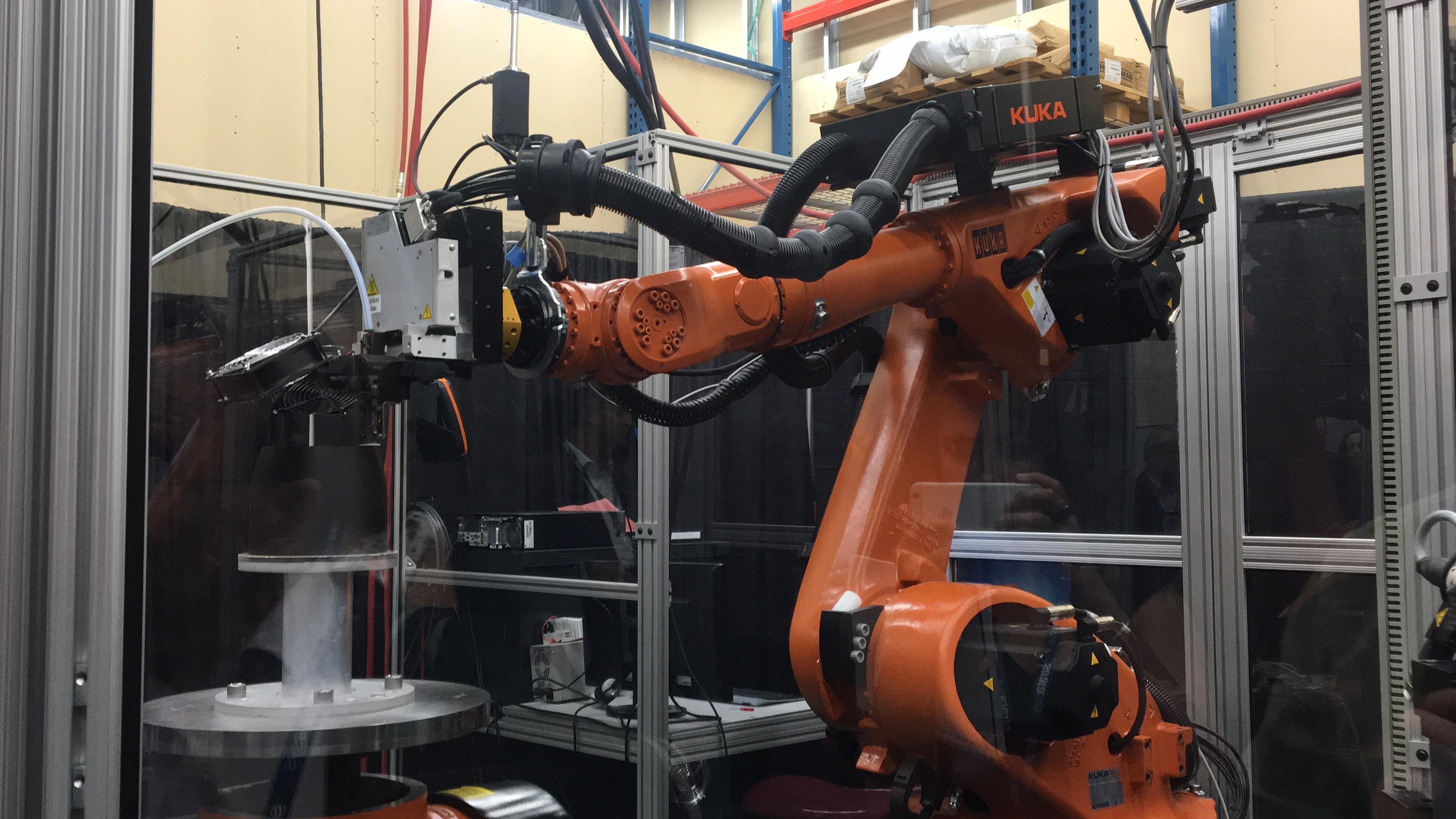 Applications Not Yet Defined

The printers will be showcased at the International Manufacturing Technology Show Sept. 12-17 in Chicago with hopes of gaining more feedback from potential customers or for use-cases: “Traditionally we’ve been known as a company that has made great printers, but we’re now very focused on the application and use case," says Rich Garrity, president of Americas for Stratasys.

Kerry Stevenson, founder and editor of 3D Printing online publication Fabbaloo, says Stratasys could be setting a new manufacturing precedent in the industry: "It’s now very clear they are seeking to adapt (and even invent) their technology to address specific needs of industry, who have up to now only been able to use 3D printing equipment in limited ways. If these concepts catch on with industries like aerospace, I can see Stratasys, and indeed other 3D printer manufacturers, developing even more specialty 3D making equipment to overcome industry manufacturing challenges." 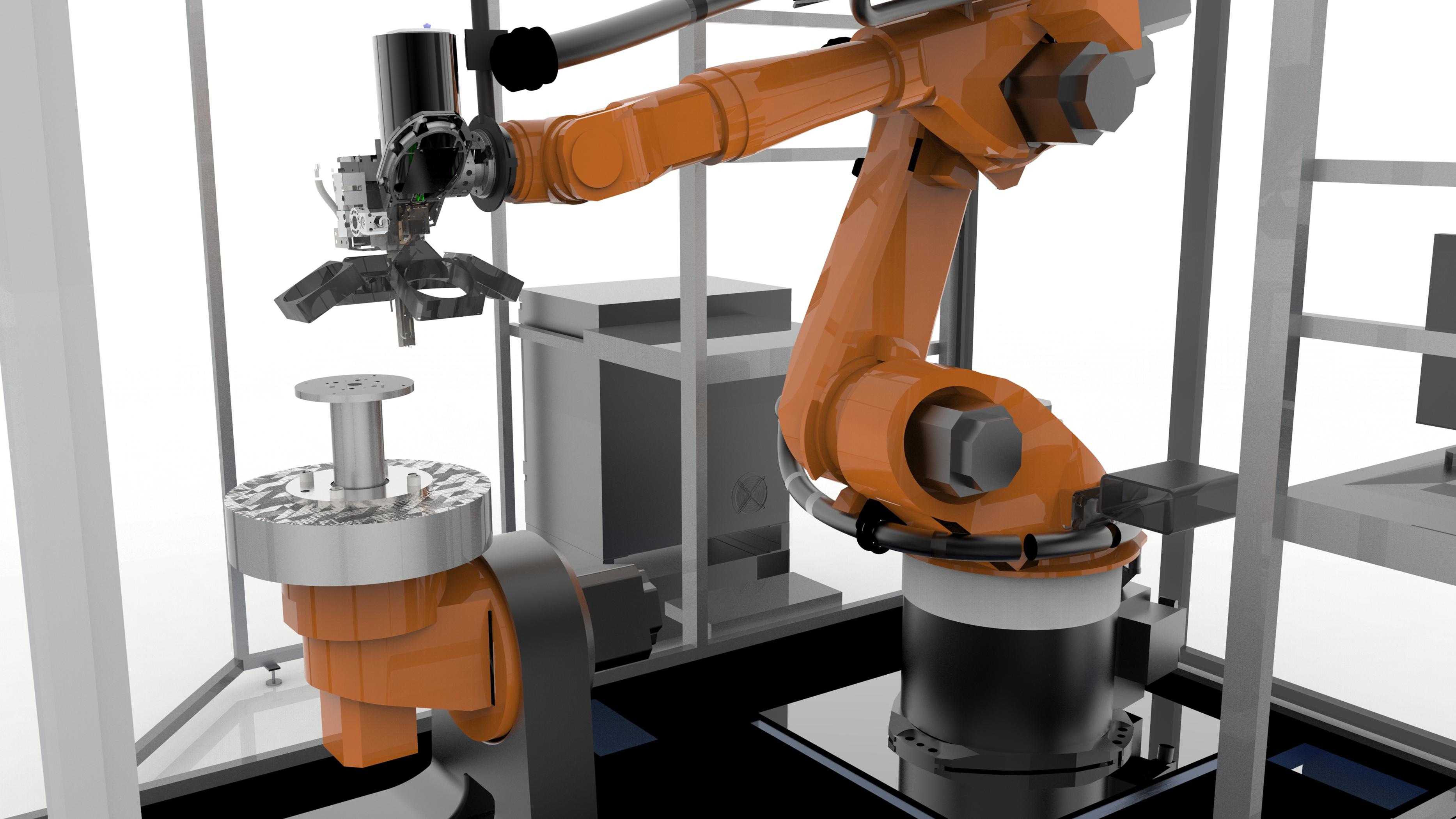 "While the adoption and appetite for composite parts is growing dramatically, the way to make those parts is still done very much the same way it has been done for many years,” says Garrity. The market for aerospace composite structures this year alone is $13 billion. 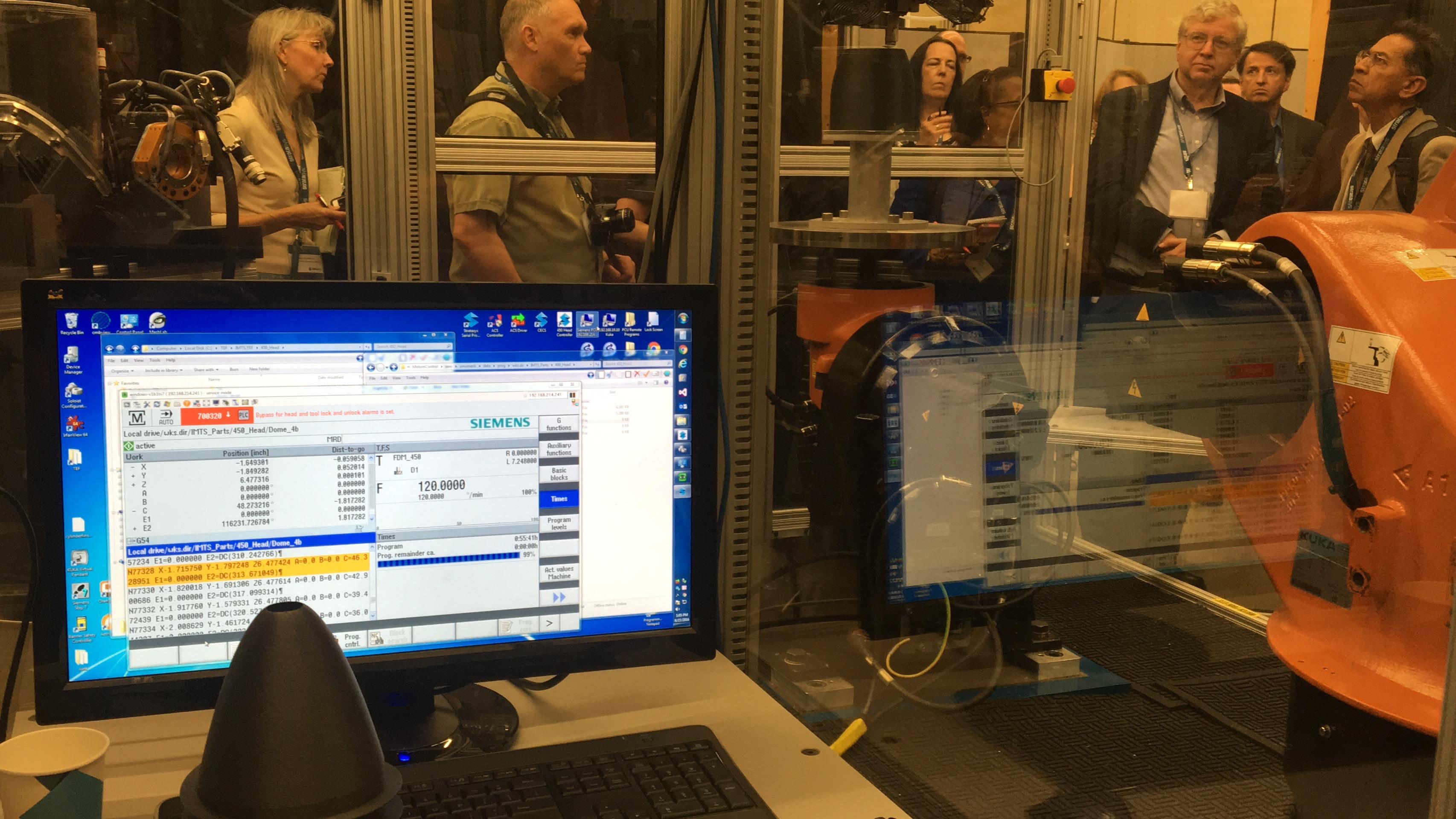 The software for the Robotic Composite 3D Demonstrator is powered by NX Siemens, and the motion controls and PLM software integrate with Stratasys’ additive manufacturing technologies.

The dome, which serves no existing machine functional purpose, was created for the Robotics Composite Demonstrator to show the 8-axes print from the inside-out, rather than layer-by-layer printing. The part was produced without any support by continuous reinforcement.

The central domes are produced with a single spiral toolpath that eliminates any seams or layer transitions. The reinforcing rips are printed orthogonal to the dome layers, also in a single toolpath that follows a complex curve through space. 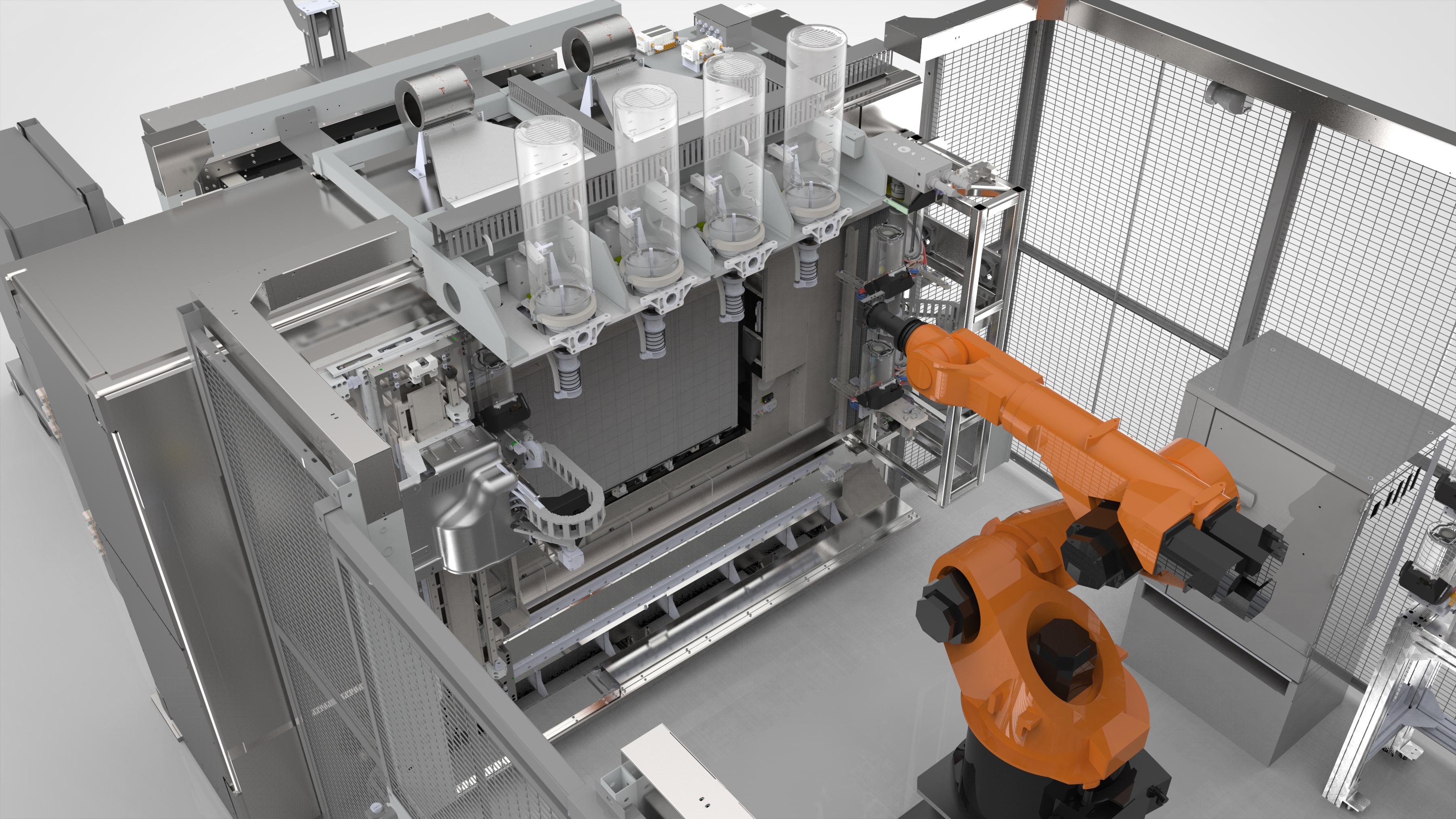 This means that a part could be endless feet long and manufactured in days without any manual tool changes or constant supervision. 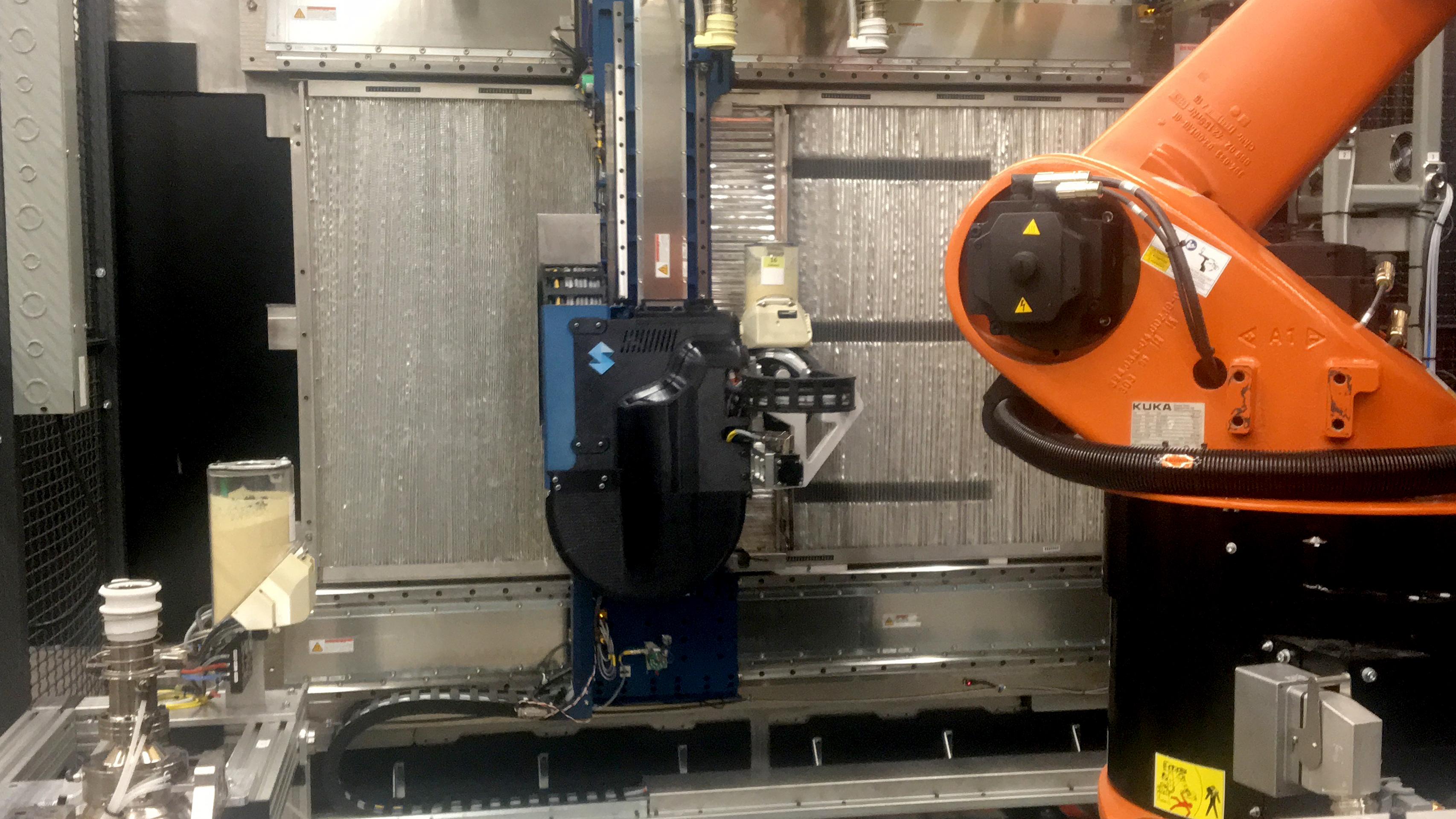 Application use of the fused deposition modeling (FDM) Infinite-Build for aerospace includes interior parts for aircraft, a $13.5 billion market in 2015. Large panels or ducts that are multiple feet long could be created in one piece with significant weight reduction benefits and lower variability risk, according to Stratasys.

Stratasys showcased the Infinite Build 3D additive printer and explained partnerships with Boeing, Ford and Siemens. The partners were the only customers aware of the project and helped dictate requirements of the machine and possible end-use cases. 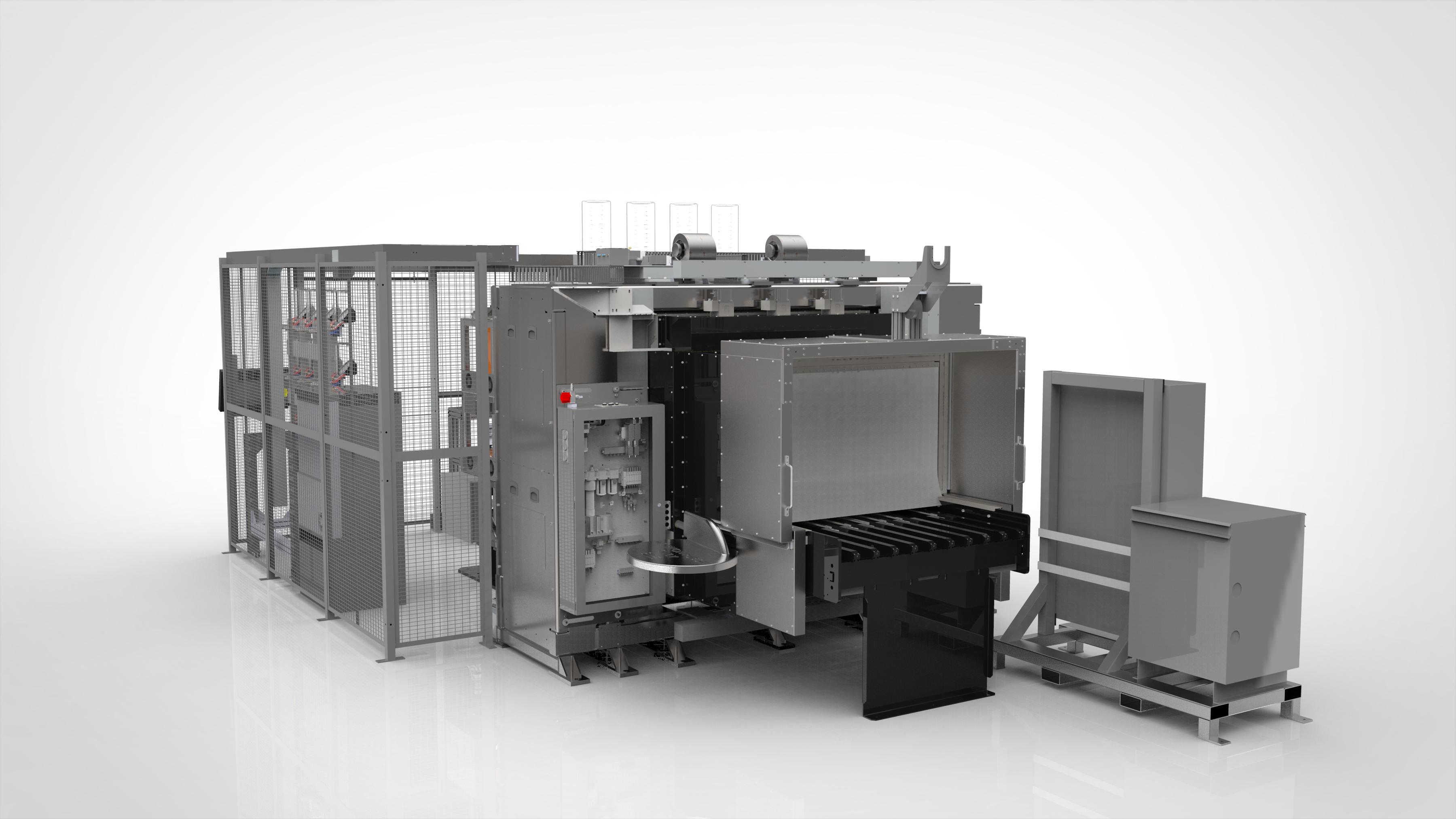 The build envelope is 40 inches wide by 30 inches tall and unconstrained in length. A table as the same height as the platform can be used to support the piece as it protrudes from the machine. 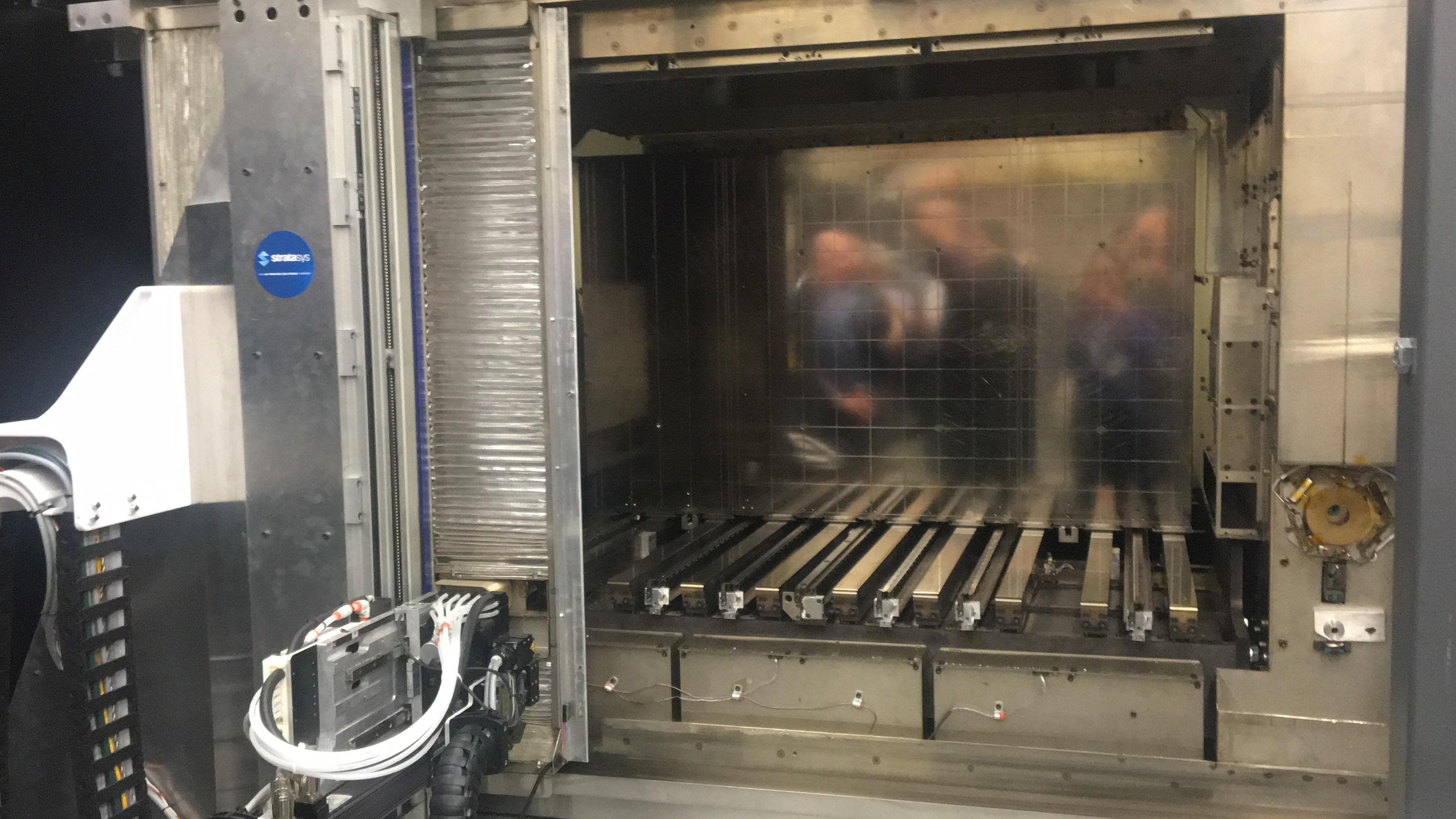 A Close Watch On The Process 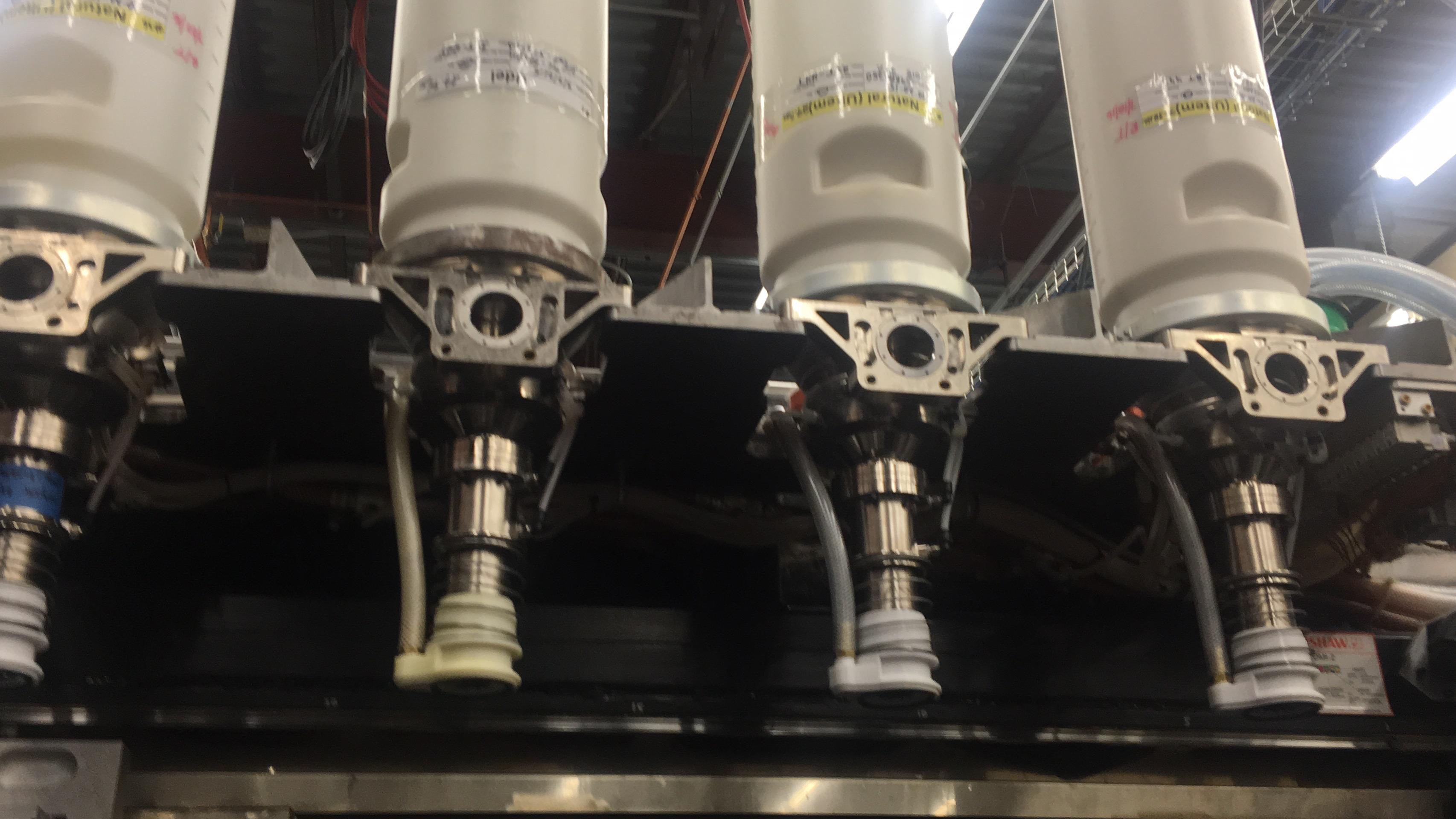 There are up to four refill containers at 30 lbs. each mounted to the demonstrator, with additional containers available within the machine space to be interchanged by the robotic arm. Hypothetically, the system could run weeks at a time without stopping. 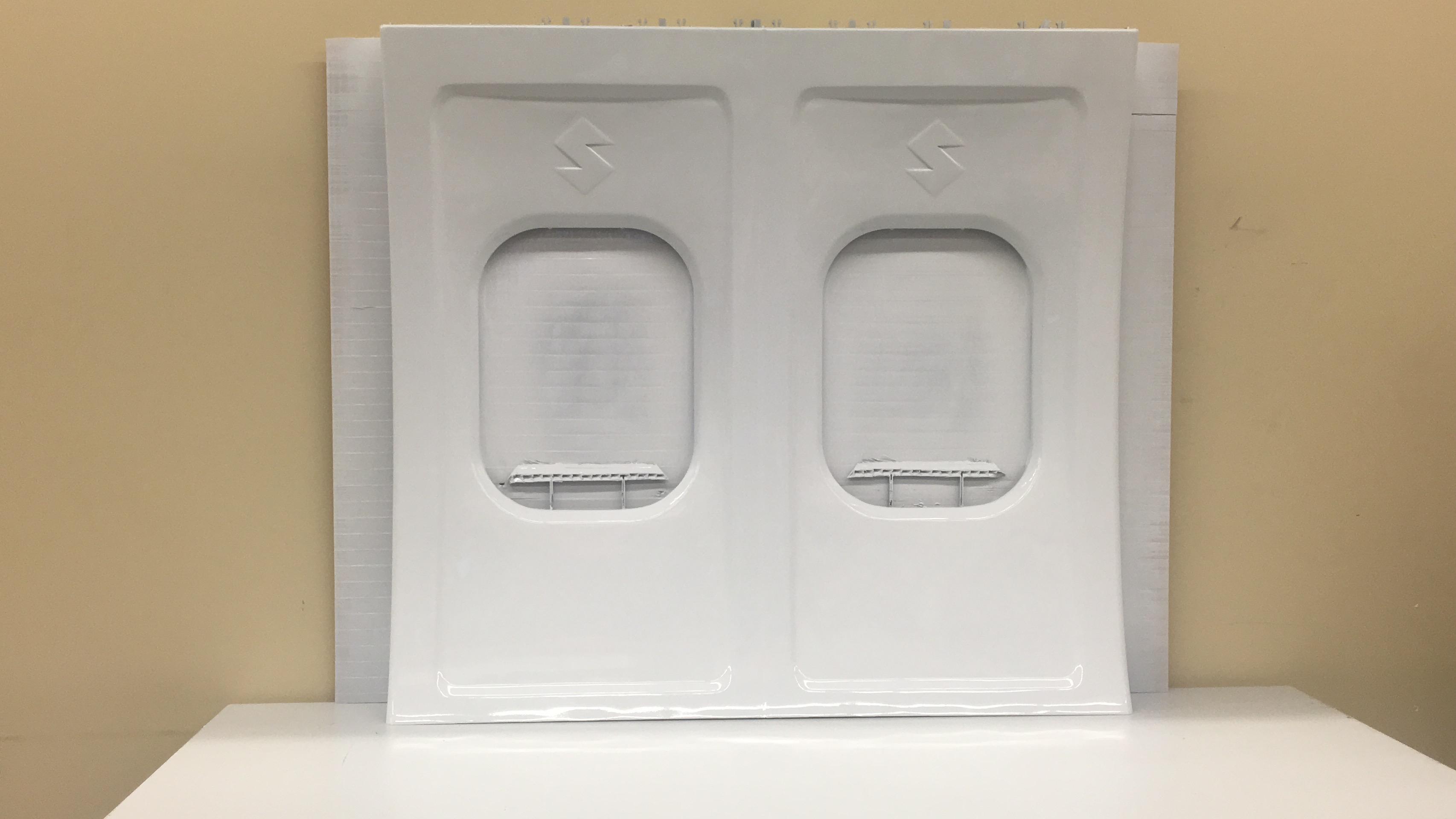 This aircraft windows prototype took 80 hours in 1000 layers. The part, taken from a scan of an old aircraft, was provided by Boeing to see if it was viable to complete. Created out of Ultem 9085 micro-pellets, the part could meet flammability, smoke and toxicity requirements for certified aircraft interiors.

“They’ve been pushing us for over a decade to be better for their own manufacturing needs. They’ve been a great partner in that,” says Jim Orrock, vice president, product leader for Stratasys.

“This Infinite Build allows us to build much larger tools that we could use in both assembly and fabrication, mostly fabrication, to help in our lower-rate production-type applications,” says Teri Finchamp, director of operations of quality for Boeing Phantom Works.

For now, Finchamp says Boeing is focused on non-flight critical and defense applications of the Infinite Build technology. ESC (environmental control system) parts and spare parts would be the potential next uses for Boeing.

Stratasys is in discussions with a current partner to potentially print a 20 ft. long wing for a high-payload UAV (unmanned aeriel vehicle). 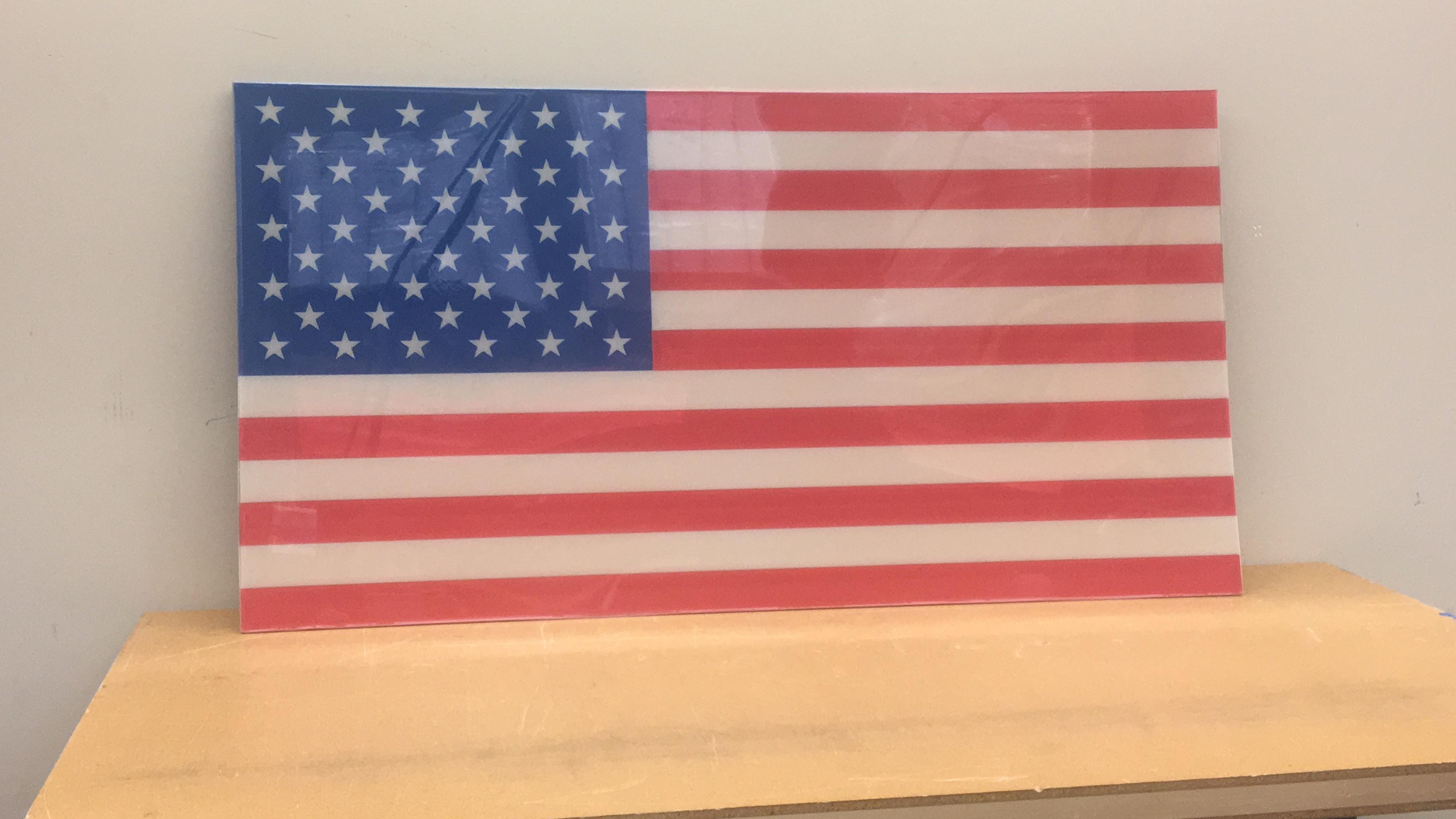 The flag, made of red, white and blue Ultem 9085 micro-pellets, took 30 hours to build and the tool changer swapped the tools 70 times. The robotic arm is integrated for automated operation unattended.