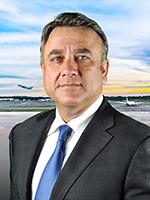 Q: Abdol, how has establishing your headquarters in Greater Fort Lauderdale benefited your company?

A: There have been a number of benefits. For example, staffing. Being in Greater Fort Lauderdale, which is in Broward County, gives us a nice central location between Dade and Palm Beach counties. The location is ideal because it allows us to recruit talent from all three counties and the work force is world-class. South Florida is the focal point for aviation and aerospace in the United States. There are thousands of companies here that support global aviation and aerospace needs, which in turn, leads to a large labor pool of talent across the operational spectrum. We also attract out of state talent by leveraging Florida's zero state income tax, low cost of living and of course, the warm sunny climate.

Q: How has GA Telesis benefited from the local tech environment?

A: Well, we recently launched DIG or Digital Innovation Group, Powered by GA Telesis. This new division will become a forerunner in the creation of digital solutions aimed at bringing Blockchain to our industry along with all other industries that have similar attributes. What made this all possible is that Greater Fort Lauderdale is becoming a Florida epicenter for tech companies. With companies like Citrix and Ultimate Software [now UKG] headquartered here, we are seeing more and more companies nesting here and therefore attracting tech-talent.

Q: We noticed you have customers located across six continents. Does being located in Greater Fort Lauderdale give you an advantage within the global market?

A: Definitely. Greater Fort Lauderdale is a destination many of our customers like to visit. In fact, we often hear them say "GA Telesis is headquartered in paradise," so it's a huge draw. Another big advantage for us is the amount of growth in international travel at Fort Lauderdale-Hollywood International Airport. So many US airlines, like Delta, American and United, have large international networks which serve Greater Fort Lauderdale. And major international airlines like Emirates, Azul and Air Canada, means my team can get anywhere on the planet—with one-stop or less—to meet any of our global customers. I can work all day, hop on an evening flight on one of the US carriers and be in London in nine hours. Or I can hop on an Emirates flight and be in China 21 hours later or in every destination in between.

Q: What would you say to other CEOs in your industry looking to relocate?

A: Greater Fort Lauderdale brings a lot to the table. It's a business-friendly environment. Couple that with no state [income] taxes and you've got an instant recipe for success. In terms of taking a company to the next level, you have a diverse workforce surrounded by two of the biggest counties in the state and all connected by public railway transportation, I-95 and the turnpike. Three US News & World Report ranked research universities are within 30 miles of Greater Fort Lauderdale along with 10 smaller universities within the same proximity or less. Access to a large deep-water port, Port Everglades, is a few miles from the heart of downtown. Here's where it gets really good. Greater Fort Lauderdale is a fantastic place to live, with over 300 days of sunshine, an average temperature of 80 degrees, top restaurants, and entertainment venues. You're 15 minutes away from the NHL arena, 20 minutes from the NFL stadium and 30 minutes from MLB. What could be better? Moving here was a great decision.