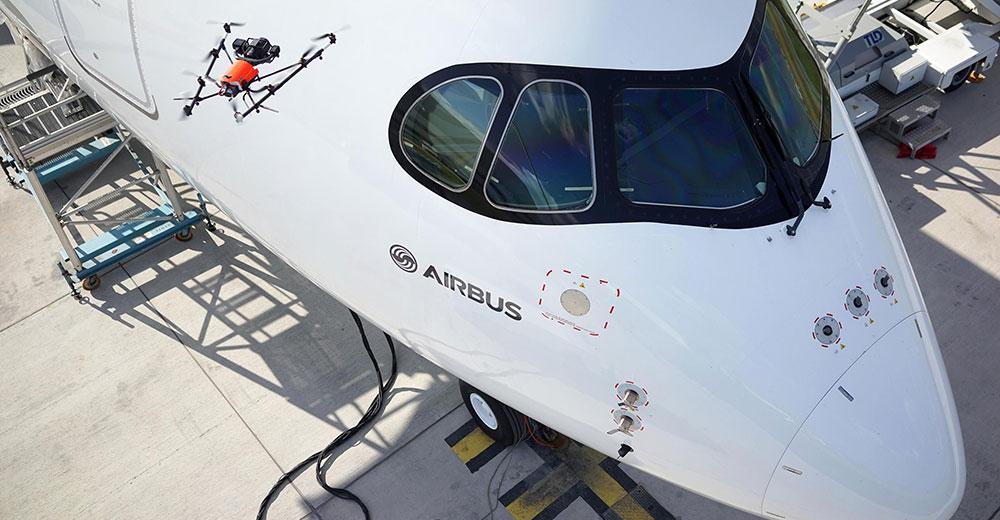 Airbus has been developing its Aircam project over the past two years in the Airbus BizLab in Toulouse, France. Working in partnership with the Airbus quality department and the A330 program, the project combines an intel drone with Airbus’ software solution to provide quality experts with high-precision photos of aircraft in less than 15 minutes. Experts are able to analyze the photos and generate quality reports using Airbus’ software suite, which Airbus says helps to improve traceability, prevention and reduction of damage. 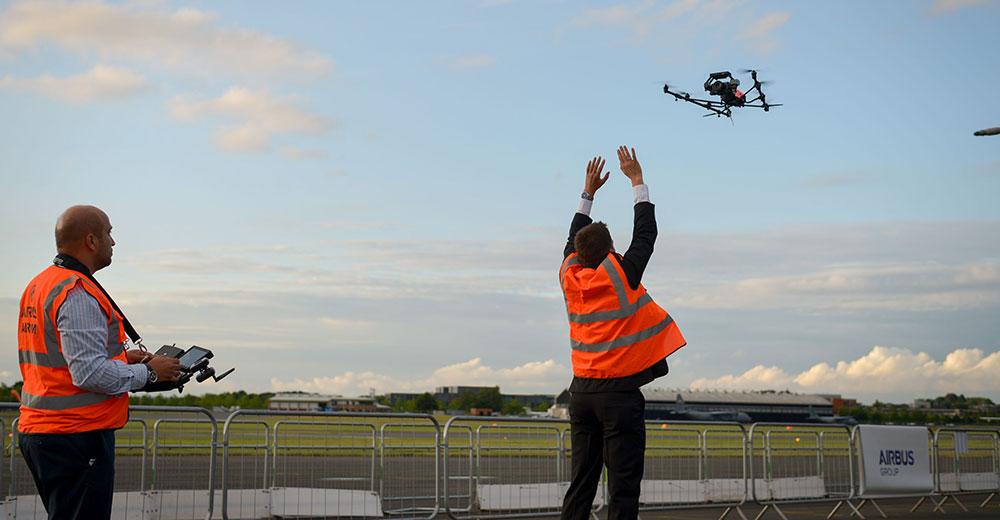 The drone inspection project was displayed at the 2016 Farnborough Airshow with the visual inspection of the upper part of an A350 XWB aircraft. Since then, the project has progressed from prototype to an implementable industrial phase and Airbus plans to commence operations this year. Currently, the drone inspections are designed for outdoor use, but Airbus says a configuration for use inside hangars should be available within 12 months. The Aircam project is expected to reach the United States soon and Airbus says discussions are underway to deploy drone inspections as a service proposed by Airbus Aerial, which is based in Atlanta, to the Airbus plant in Mobile, Alabama. 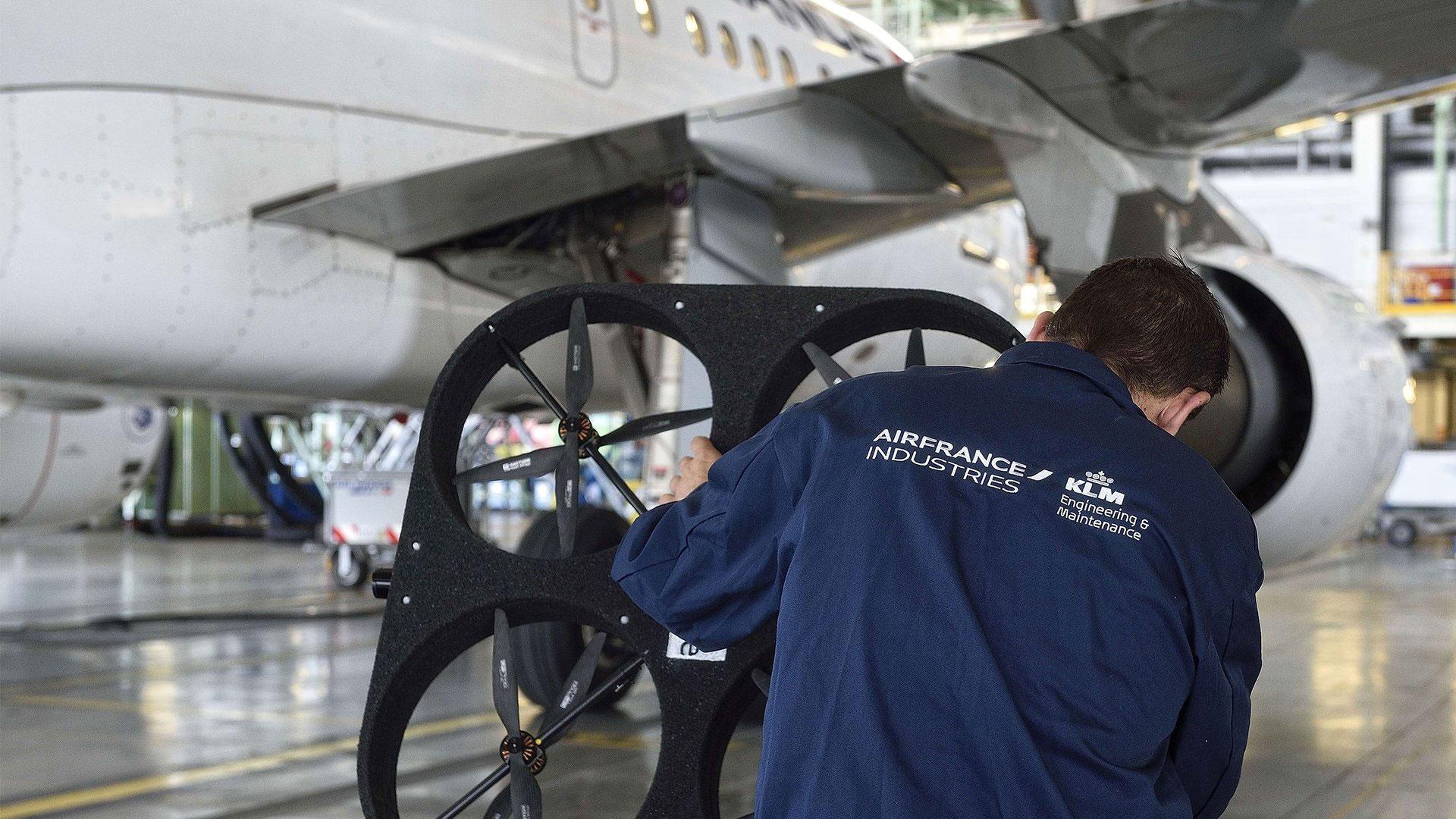 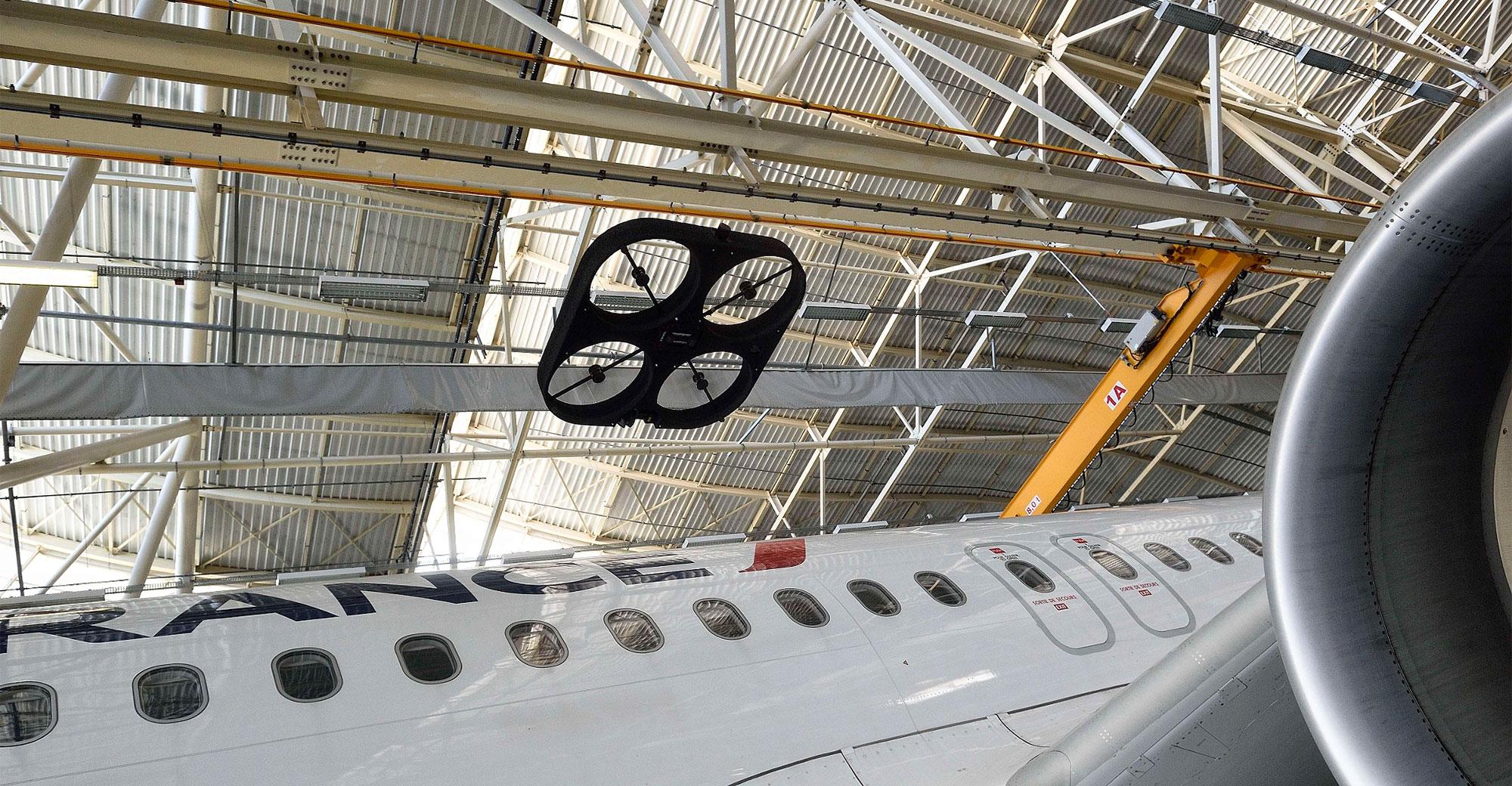 While Donecle says use cases for their drone’s aircraft inspections vary from general visual inspection to paint quality checks or detection of structural defects, AFI KLM E&M has used the drones to conduct automated inspection of aircraft “stickers.” According to Donecle, a typical aircraft has around 200-300 stickers, which take several hours to inspect. Once a drone inspection is completed, data can be fed through the Donecle’s image analysis software to produce inspection reports for multiple applications 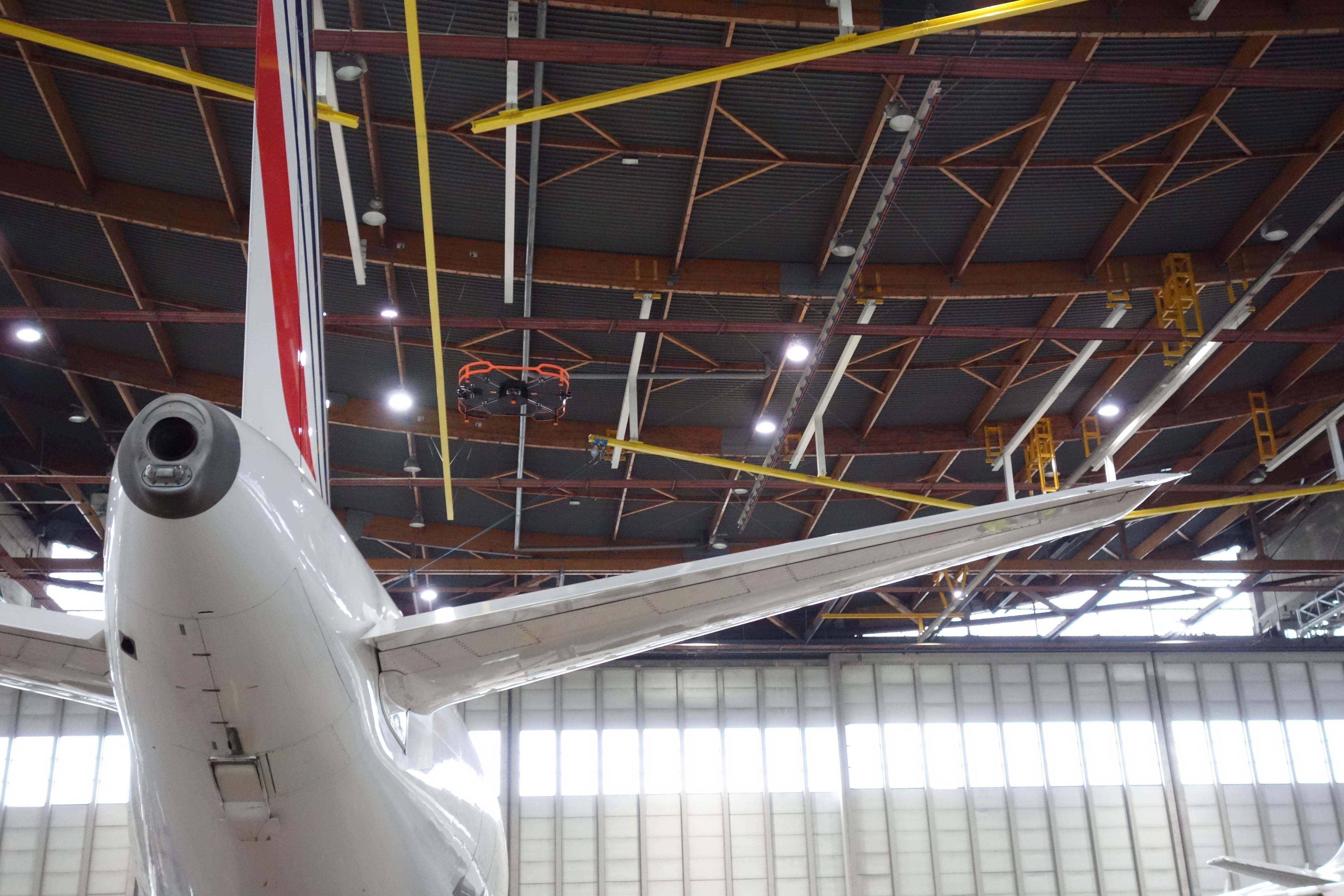 Donecle says they have conducted hundreds of inspection flights on narrowbody aircraft across AFI KLM E&M’s maintenance bases since the partnership was first announced, which has enabled strong interaction with the MRO’s workforce to improve the system and increase expertise. According to AFI KLM E&M, other types of inspections for paint and lightning strikes are now in development. 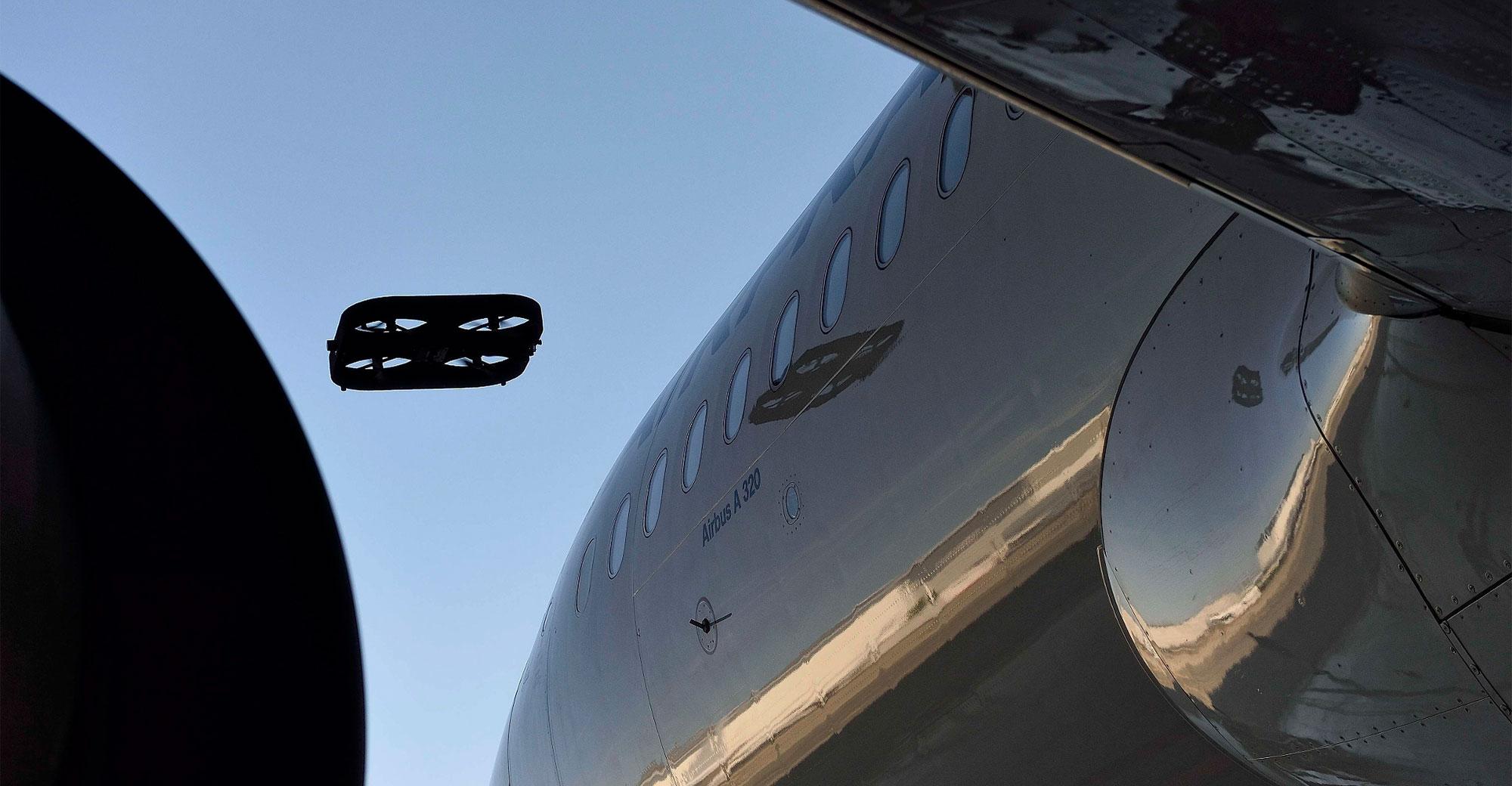 In addition to the partnership with AFI KLM E&M, Donecle has been working with a number of other airlines and aerospace companies on drone inspection tests. Donecle believes the industry is “ripe for innovation” and sees a growing demand for drone inspection technology. With that in mind, the company expects new partnerships to be announced over the course of 2018. 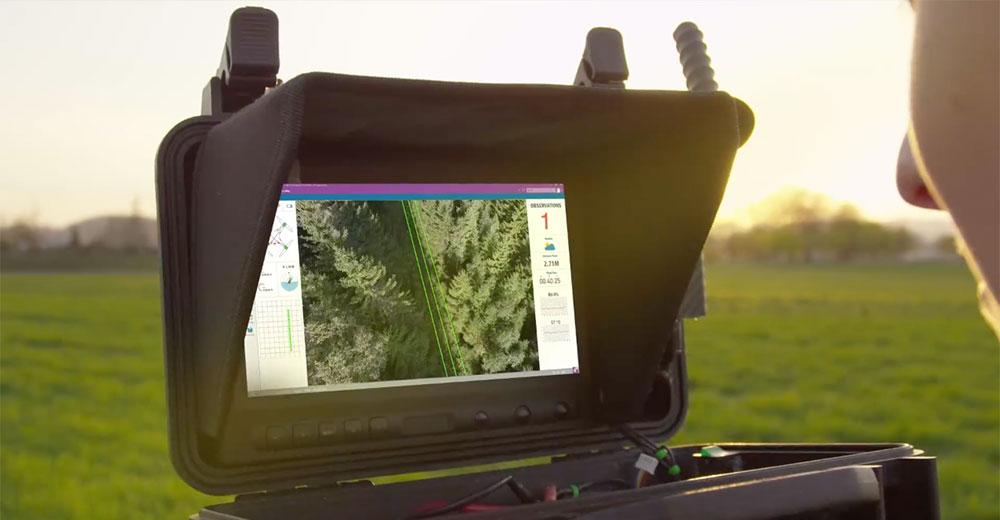 IFS Labs, the research and development arm of enterprise software provider IFS, has been working on ways to link drones and camera footage to the company’s software systems. IFS presented a proof-of-concept in 2016 that focused on drone inspections of aerial power lines in remote forested areas. As the drones flew over power lines, video was processed in real-time to detect obstructions.

Observations from the video’s image analysis were sent through the company’s IoT Business Connector software, which analyzes operational data for business insights, to IFS’ applications suite. Through the applications suite, work orders for power line obstructions could then be automatically scheduled and dispatched in the most optimal way. 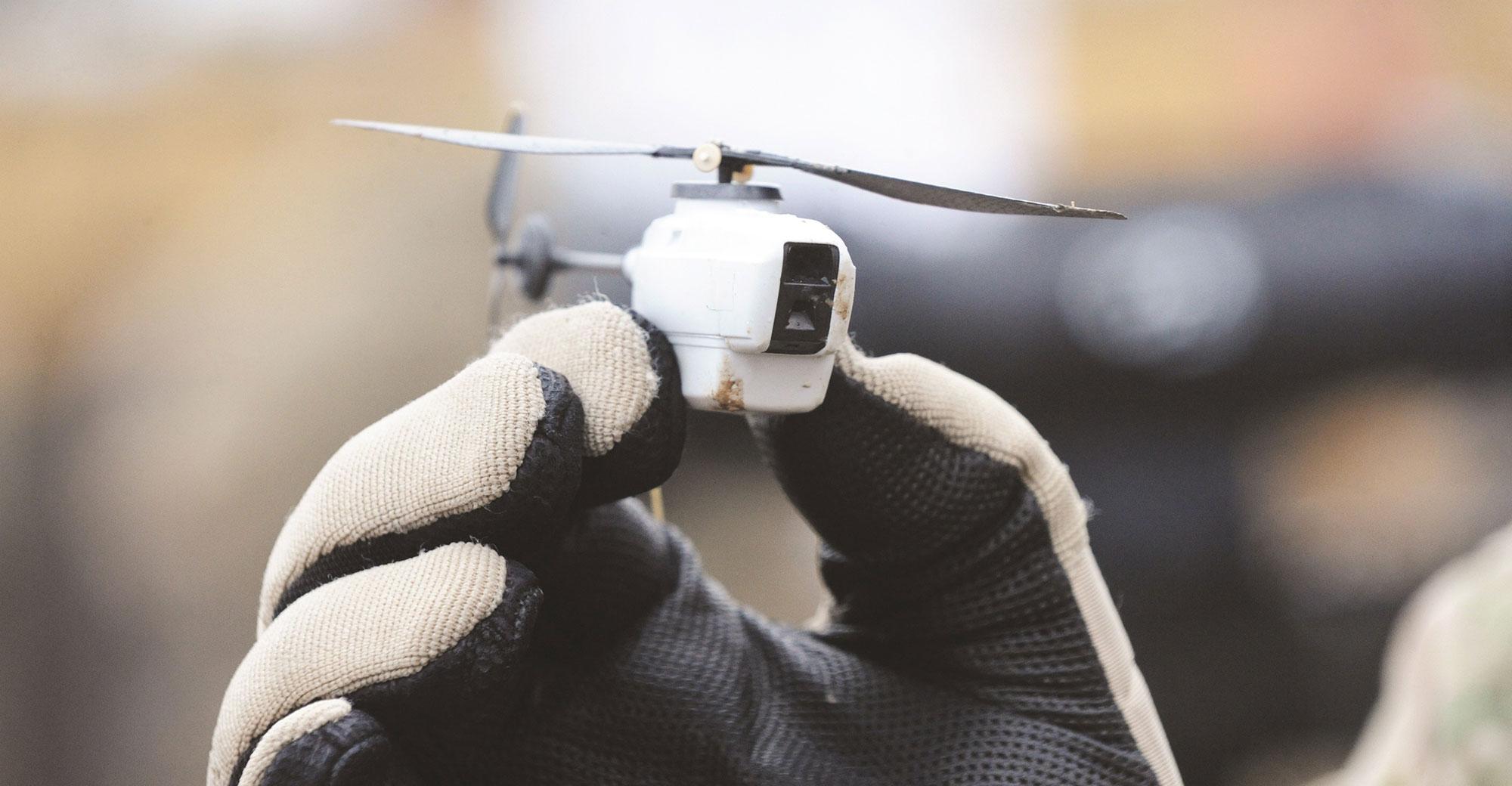 Within the aerospace industry, IFS Applications includes MRO software for streamlining maintenance workflows and aircraft and component asset management. According to a spokesperson for IFS, this software could theoretically be linked to the camera on a drone through IoT Business Connector. IFS is currently in discussions with an unnamed customer on implementation of this drone model and the company believes connecting drone technology to its advanced analytics and applications will magnify the value of drone inspections. 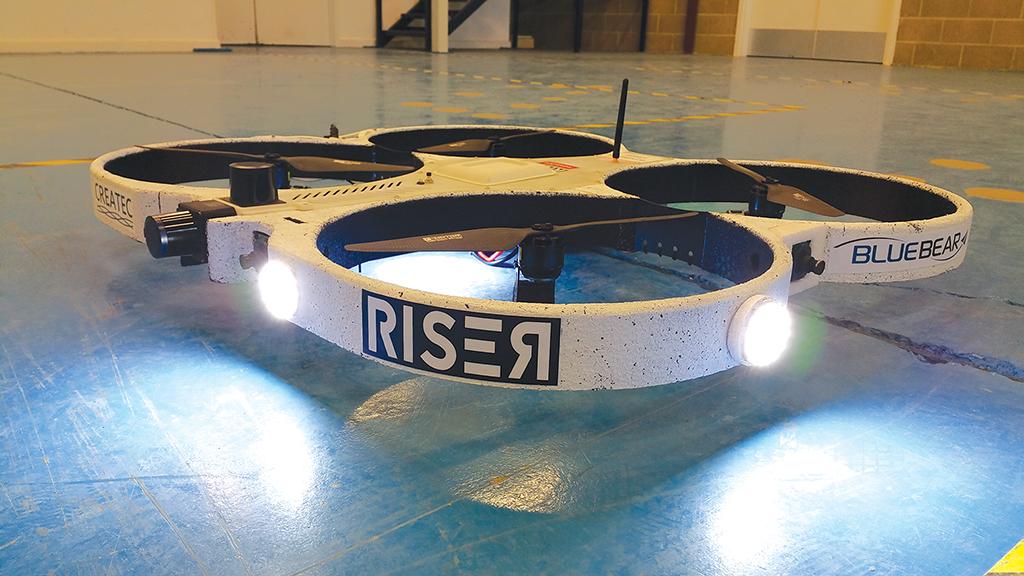 EasyJet has been trialing aircraft inspection via UAVs for several years, including a collaboration with aviation software company Output42 and unmanned systems specialist Blue Bear. The joint venture, called MRO Drone Ltd, employs a new drone inspection method called Remote Automated Plane Inspection and Dissemination (RAPID). The initiative combines Blue Bear’s drone technology with Output42’s 3D-mapping software, which visualizes the location of drones and damage in relation to the aircraft being inspected. As the drone conducts an automated flightpath around the aircraft, it takes a series of high-resolution images of the surface, providing a general visual inspection. Using the RAPID App, captured data can be reviewed, sorted and distributed via an airline’s reporting systems. The process aims to cut the time required for manual inspections—approximately eight hours—down to an hour or less, reducing AOG time by up to 90%. 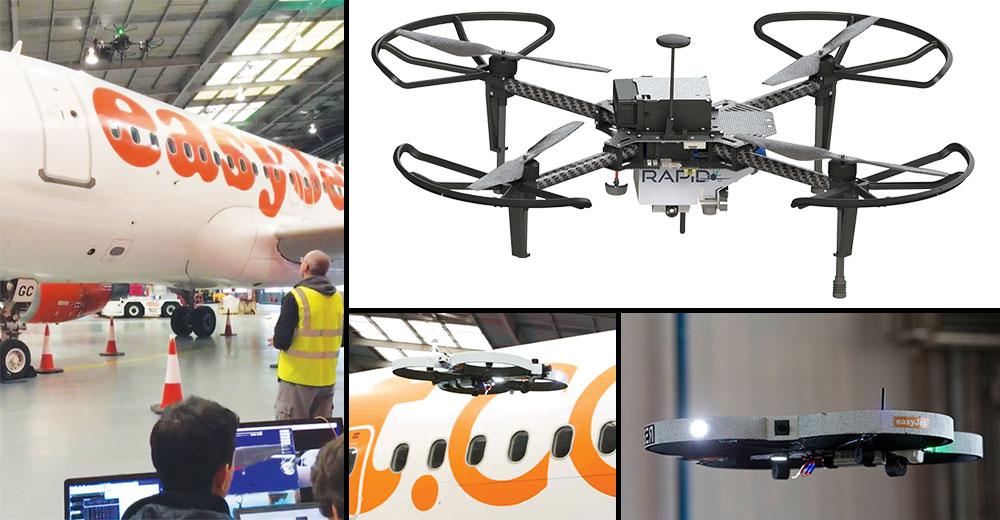 EasyJet demonstrated the RAPID system to press and investors at its Innovation Day event at Gatwick Airport last September. This year, the airline plans to roll the system out at its two UK maintenance hangars at Gatwick and Luton airports in London pending initial trials conducted with the UK Civil Aviation Authority. If the rollouts are successful, EasyJet will look into adopting the RAPID system at some of its other European facilities. 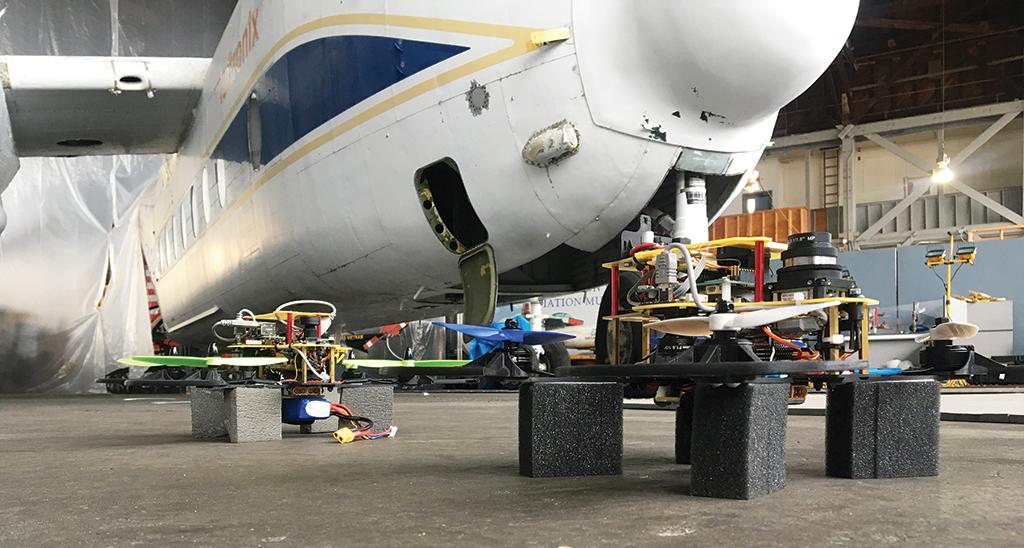 New Jersey-based drone and software company Luftronix has been fine-tuning drone inspections since it was founded in 2017. Customized drones with inspection equipment, such as optical cameras and gyroscopes, work in tandem with Luftronix’s Fused Flow software to achieve precise navigation using data from sensors attached to a drone. In addition to controlling the drone’s navigation, the software shows a model of an aircraft being inspected and allows users to create a flightpath, simulate inspections and conduct inspections. The software receives real-time images during an inspection, which users can review and mark up to flag issues. The inspection program can be set to repeat, focusing on areas of interest flagged by the user. 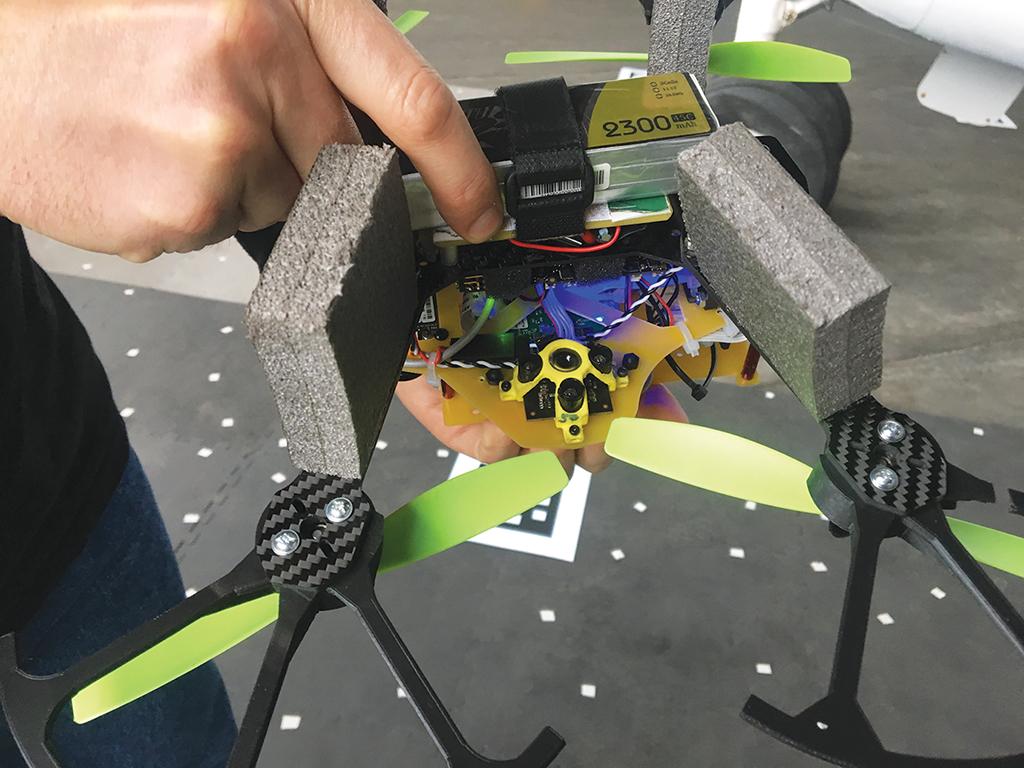 While the system can currently only operate inside a hangar, Luftronix hopes to eventually provide outdoor inspection capabilities, pending FAA approval. Luftronix plans to add additional features to drones, such as sonar sensors and thermal cameras, and the company is in talks with a number of global operators in an effort to secure pilot customers. 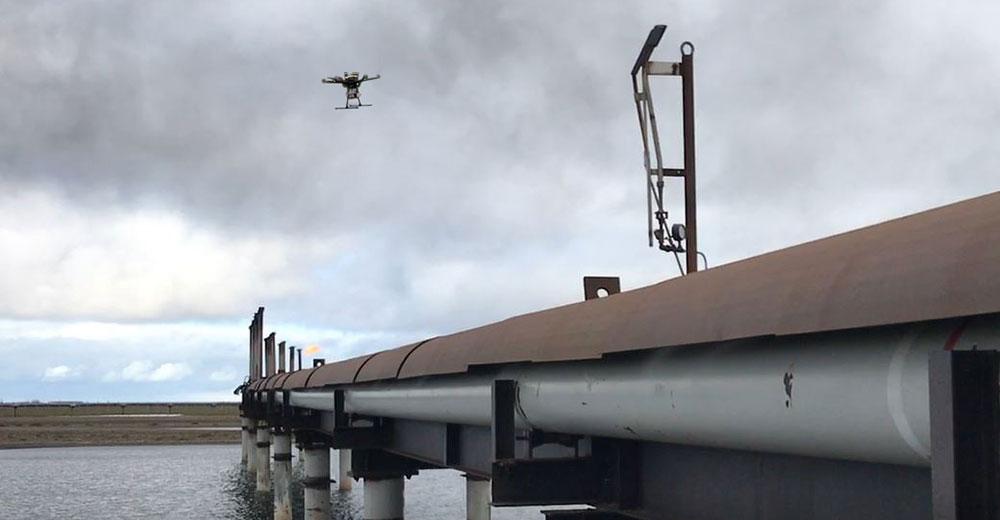 Launched as a startup by GE Ventures, Avitas Systems focuses on robotics, AI and predictive analytics for inspections across a number of industries, including aerospace. The company automates inspections using drones, as well as crawler robots and autonomous undersea vehicles. Using Nvidia’s DGX computing systems to run AI algorithms, Avitas is able to plan flightpaths for drones to optimize data collection at points of interest. AI layers the collected images on a 3D model of an asset being inspected, which automatically recognizes defects. 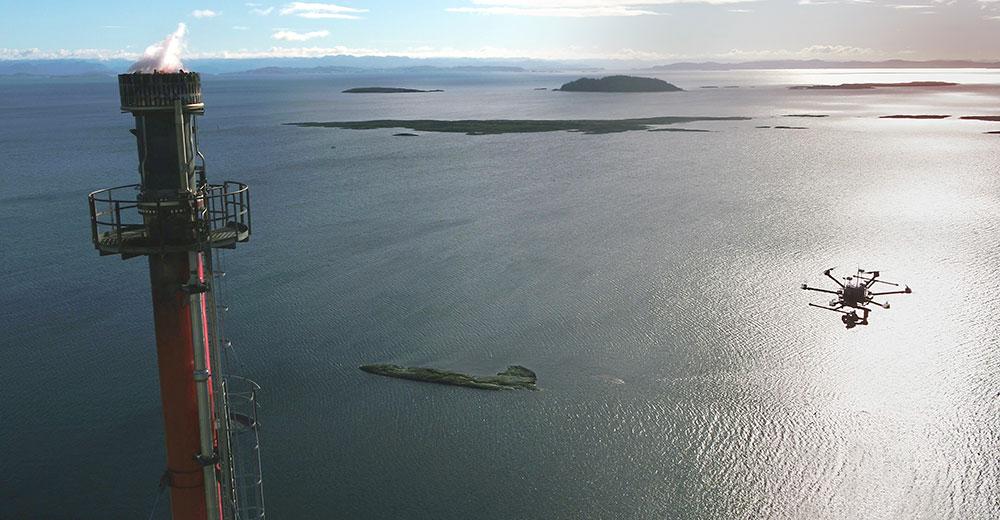 In late 2017, Avitas announced partnerships with Kraken Robotics for underwater inspections and Bureau Veritas, which specializes in testing, inspection and certification services. The partnership with Bureau Veritas will combine the company’s expertise in visual inspection and non-destructive testing with Avitas’ technologies and data analytics to create a range of upgraded services and integrity assessment models. While the partnership will initially focus on electric power and utility assets, there are plans to progressively expand to other industries.

Aircraft inspections performed by drones are gaining traction within the MRO industry thanks in large part to their ability to dramatically reduce inspection times and improve safety. Drone inspection technology has already been in use within industries such as infrastructure and oil and gas for some time now, but airlines are increasingly finding ways to adopt it as a more regular part of their MRO operations. Here is a rundown of some of the airlines, technology companies and start-ups implementing and innovating drone inspection technology.