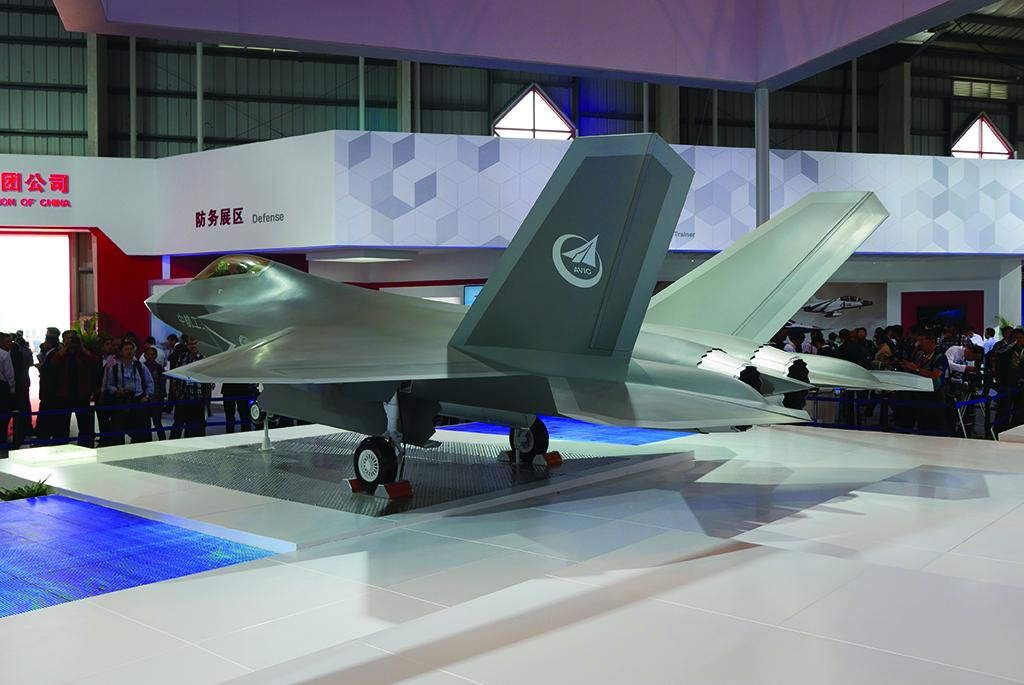 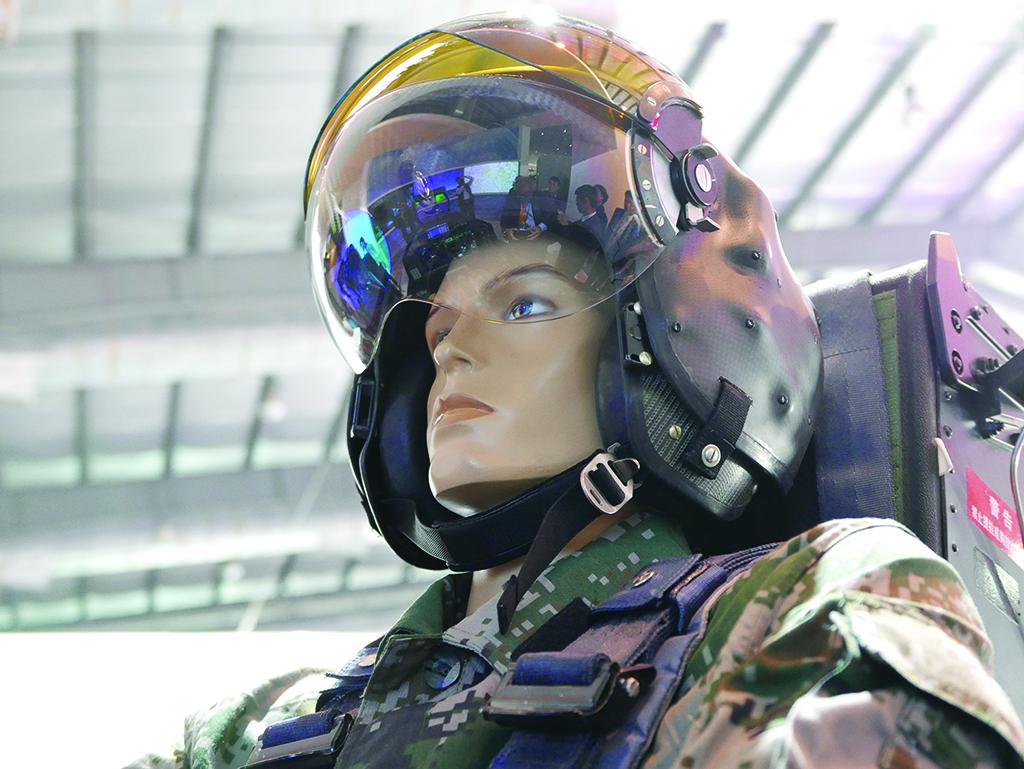 An “advanced fighter cockpit” mock-up next to the J-31 included a helmet-mounted display system. The bumps on the helmet, which would house light-emitting diodes, suggest that Shenyang favors an optical head-movement tracking system. Credit: Bill Sweetman/AW&ST 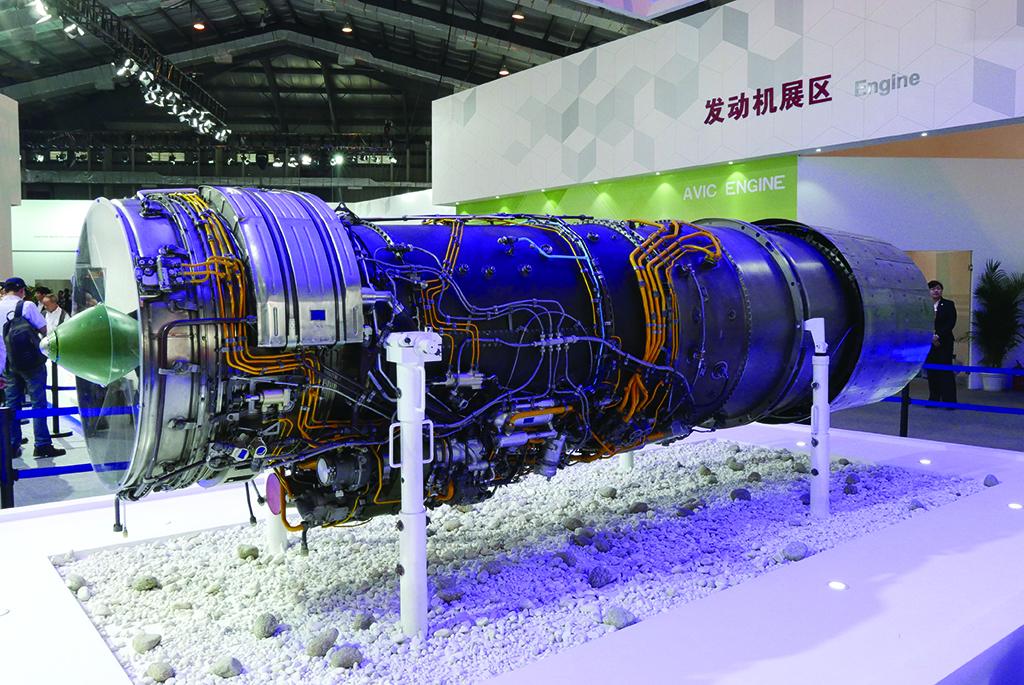 China’s homegrown Guizhou WS-13, codenamed Taihang, made a return appearance. Intended to replace Russian engines on Chinese-built versions of the Sukhoi family and on the Chengdu J-10, the 26,500-31,000-lb.-thrust engine has a composite bypass duct, a feature otherwise unique to some General Electric F404 variants. Credit: Bill Sweetman/AW&ST 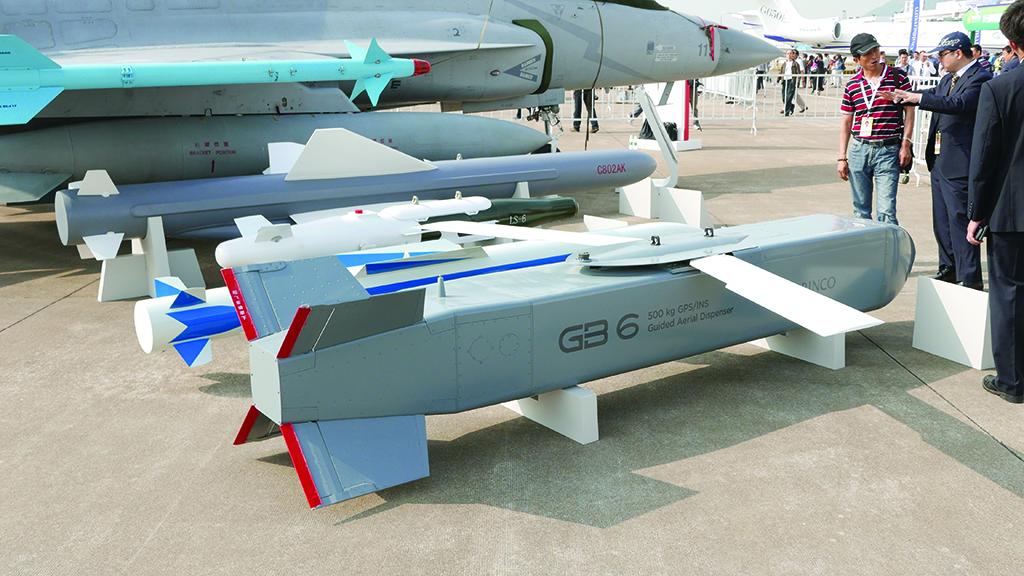 Norinco’s GB-6 500-kg.-class guided, gliding dispenser can be armed with either runway-breaker warheads or fuel-air explosive munitions. It uses GPS/INS guidance. It was displayed on an operational Xian JH-7 attack fighter and alongside a Pakistan air force Chengdu FC-17. Credit: Bill Sweetman/AW&ST 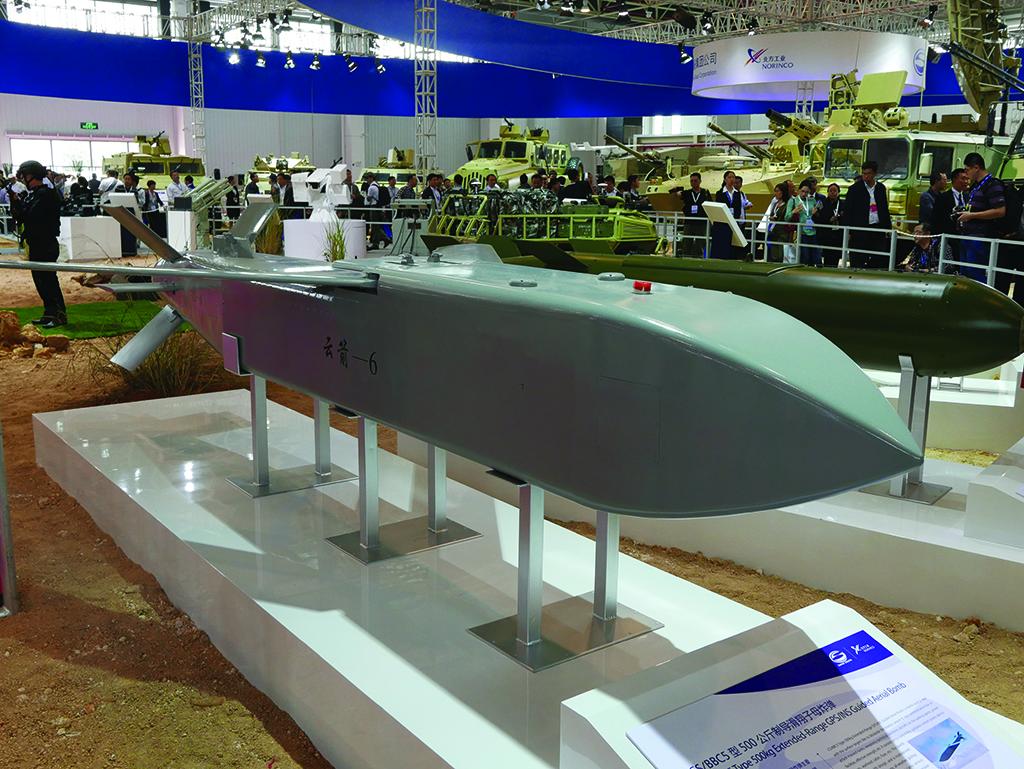 The CS/BBC5 is related to the G-6, It is a 500-kg unitary glide bomb and was displayed next to an H-6M bomber: The external design is similar to the GB-6, except there are six rather than four tail surfaces. Credit: Bill Sweetman/AW&ST 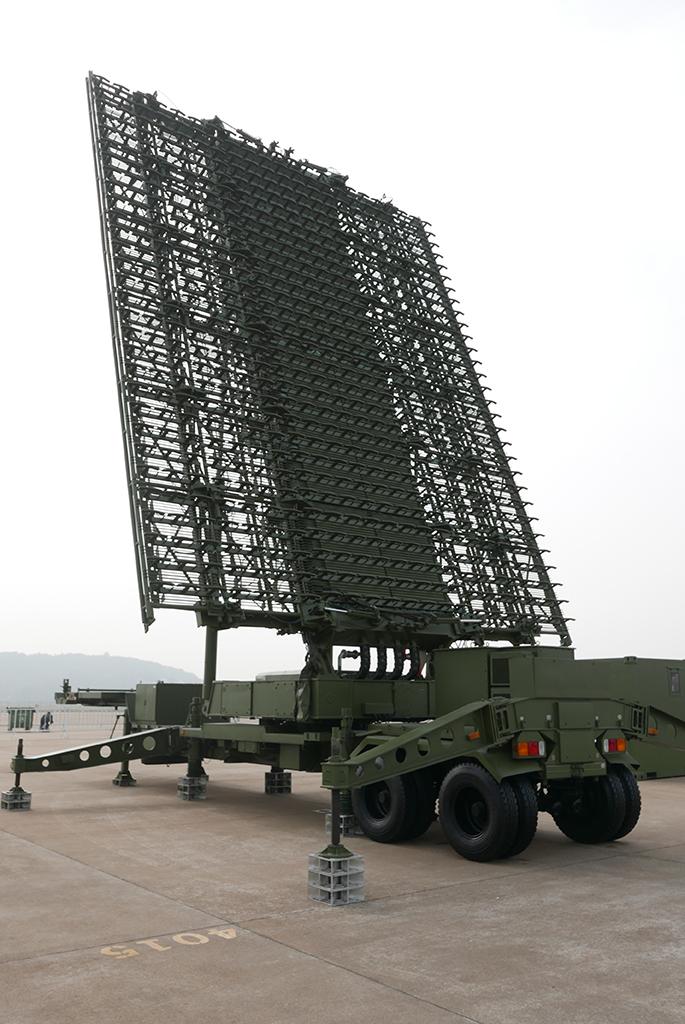 New from Nanjing Research Institute of Electronics Technology (Nriet), China’s leading producer of ground-based radars, is the YLC-8B UHF-band active, electronically scanned array (AESA) radar for air defense. It has an instantaneous field of view of ±45 deg. in azimuth and 0-75 deg. in elevation, and has a range of 250 km. Credit: Bill Sweetman/AW&ST 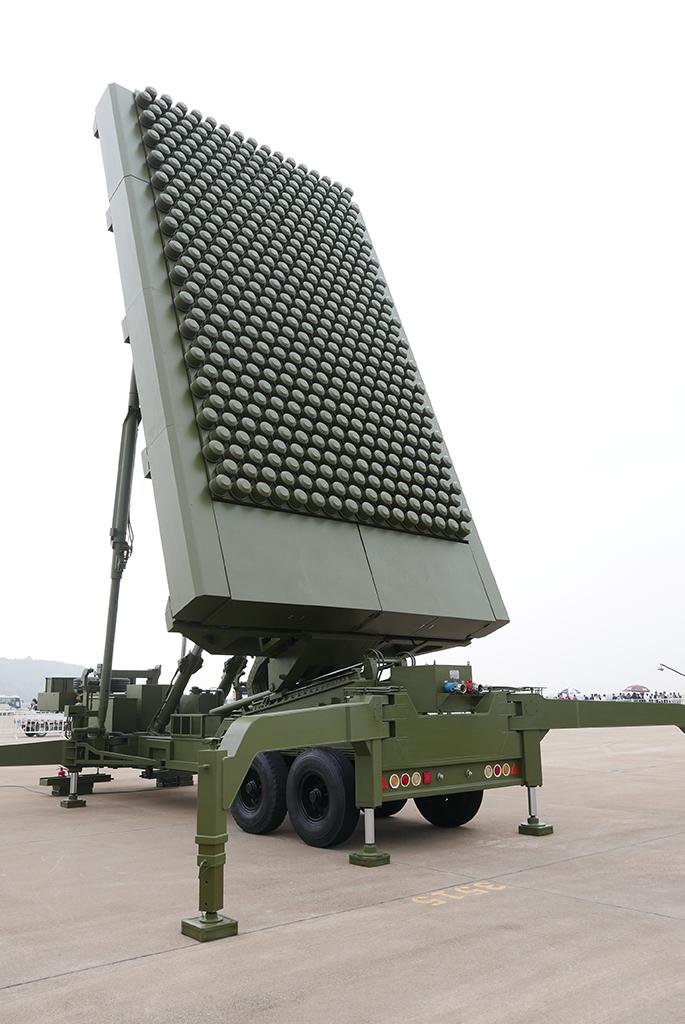 A potential competitor for the YLC-8B is the JY-26 from East China Research Institute of Electronic Engineering (Ecriee), part of the China Electronics Technology Corp. (CTEC). It is also a UHF AESA, with an unusual dimpled array that most likely comprises individual radomes covering the transmit/receive module antennas. UHF can improve performance against conventionally stealthy targets. Credit: Bill Sweetman/AW&ST 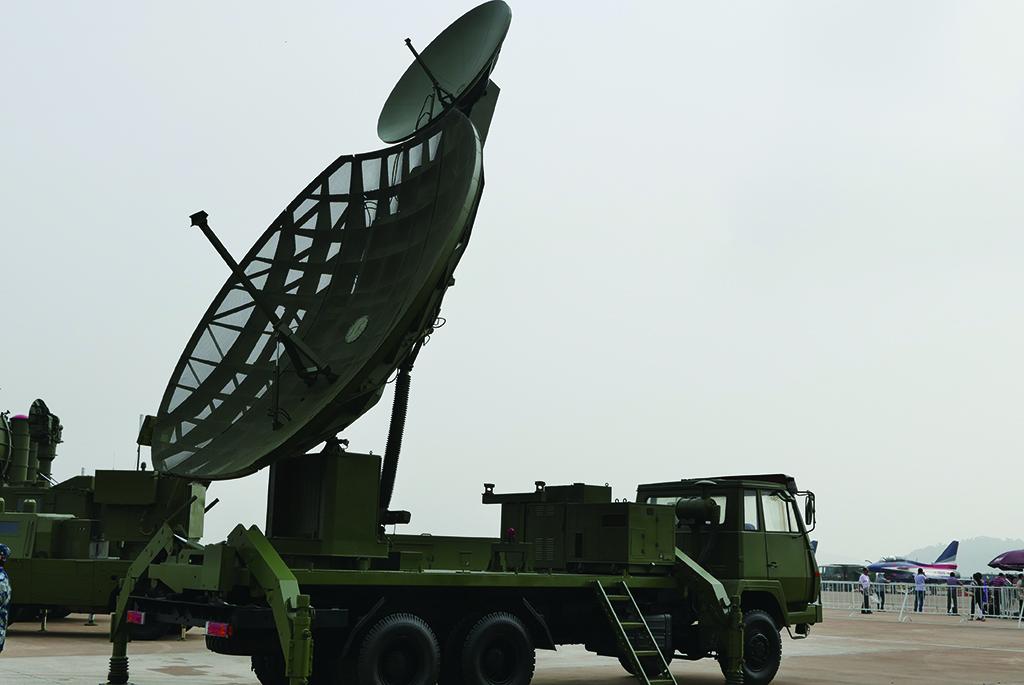 Introduced into People’s Liberation Army service in 2007, but previously classified, this is an element of the Nriet YLC-20 passive radar system. The basic system includes three omnidirectional antennas to provide time-difference-of-arrival location of airborne or other emitters, but this is a dual-band, narrow-field-of-view receiver. According to Nriet, it can detect signals from over the horizon and scattered radar signals from a target, allowing a monostatic radar to function as a bistatic system. Credit: Bill Sweetman/AW&ST 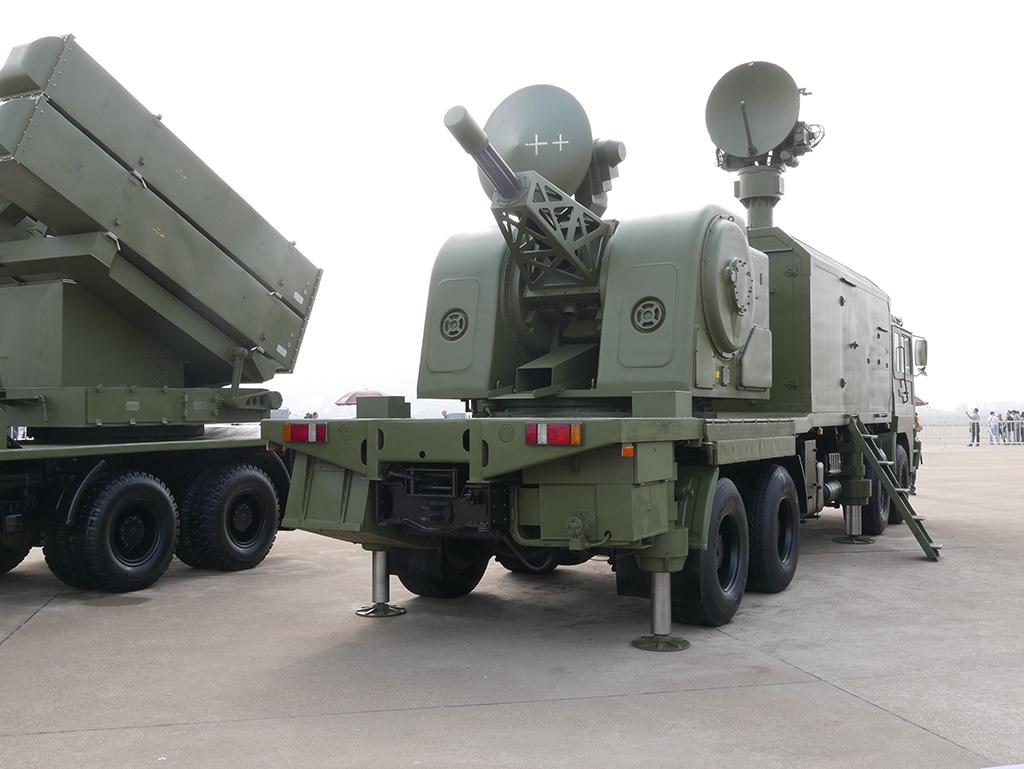 The appearance of the Norinco LD-2000 seven-barrel 30-mm Gatling gun in the People’s Liberation Army exhibit area confirmed that it is operational. The PLA uses it in combination with the HQ-6 missile system and a command-and-communications vehicle. Like the U.S. Raytheon Centurion, it is based on a shipboard close-in weapon system. Brochures have shown it deployed to defend high-value ground assets from air attack, by engaging precision-guided munitions. Credit: Bill Sweetman/AW&ST 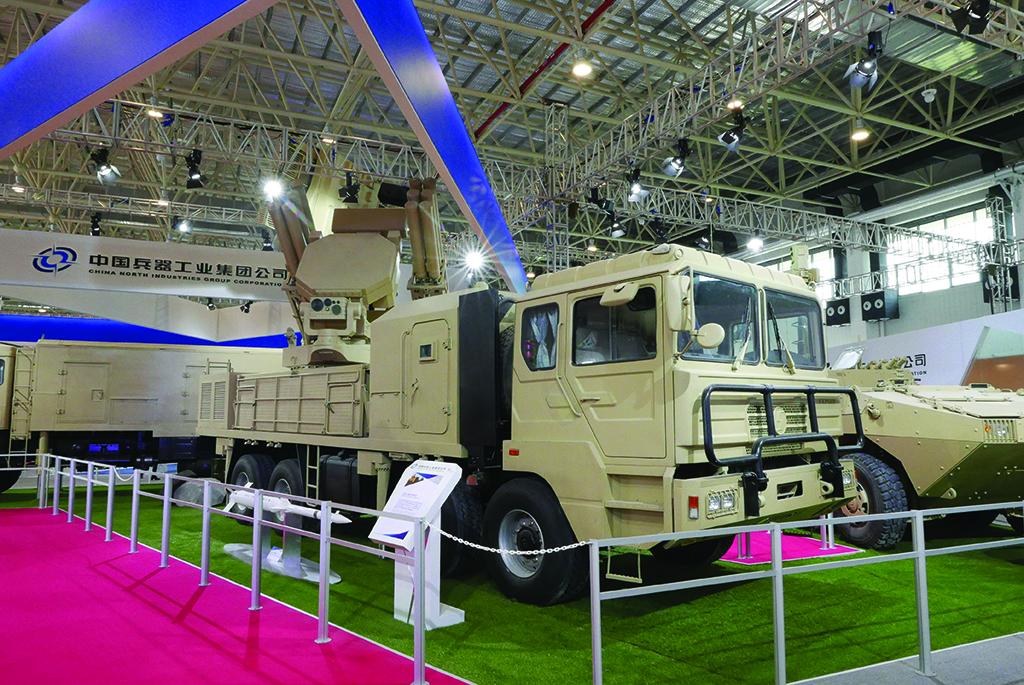 Norinco also showed the Sky Dragon 12 short-range air defense system for the first time. The command-to-line-of-sight weapon resembles Russia’s KBM Pantsyr, firing two-stage booster-and-dart missiles and mounted on a single vehicle with search and guidance radars. There is also an electro-optical backup guidance system. The system carries 12 ready missiles and has a range up to 12 km and maximum altitude of 5 km. One difference from Pantsyr is that it is missile-only and designed to be integrated with separate gun systems. Credit: Bill Sweetman/AW&ST 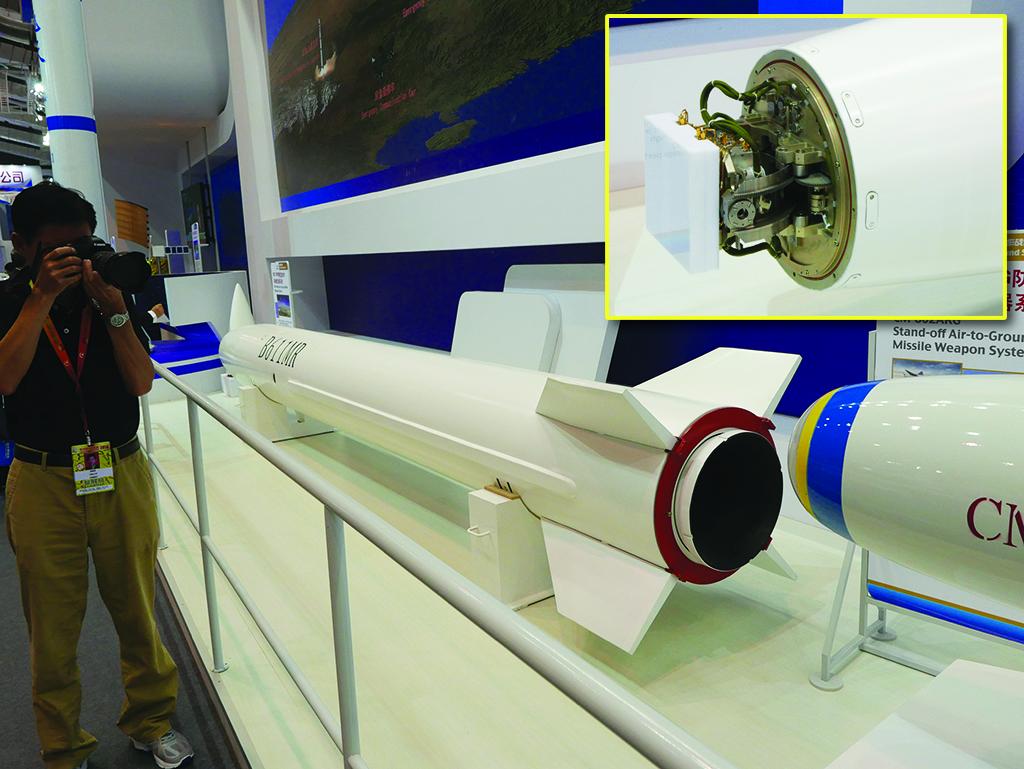 New from China Aerospace Science & Industry Corp. (Casic) is the B611MR semi-ballistic, surface-launched, anti-radar missile. With a very similar body to the M20 tactical ballistic missile, the B611MR uses GPS-inertial guidance combined with a wideband passive radar homing head (inset) and is capable of flying on a flattened trajectory and performing pre-programmed maneuvers to reduce the chance of interception. Credit: Bill Sweetman/AW&ST 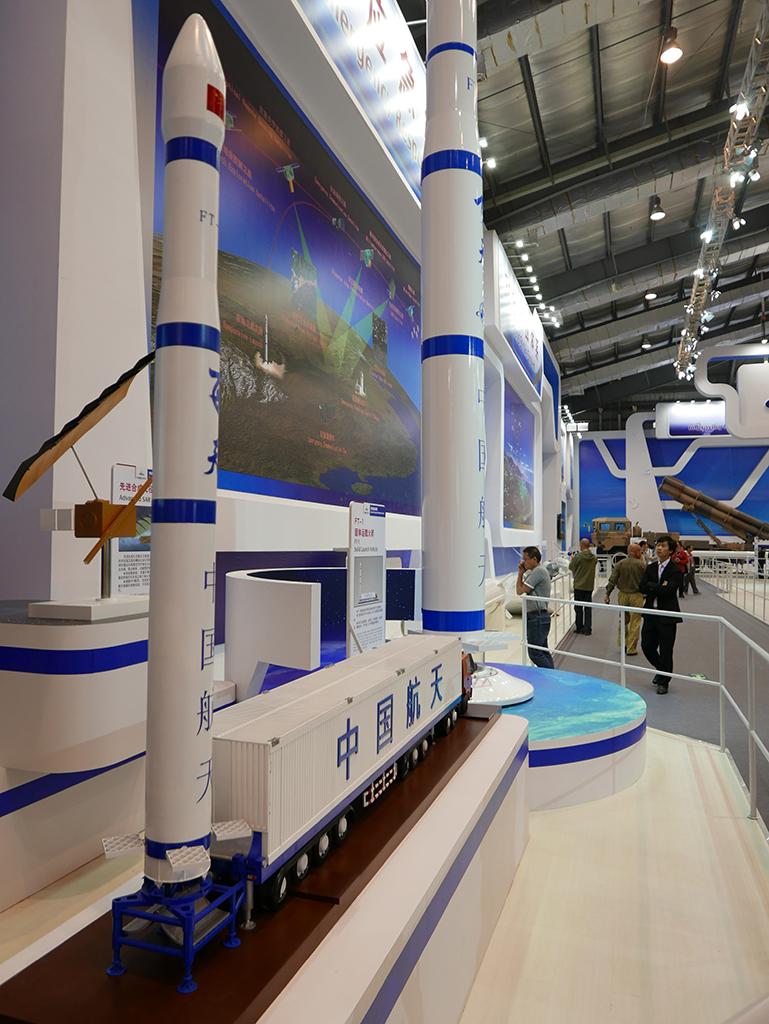 A truck-mobile small-satellite launcher has been tested twice by Casic. The new FT-1 has been designed alongside a small satellite platform as a “space emergency response system.” It has three solid-fuel stages and a restartable liquid-fuel upper stage, which allows one rocket to launch several smallsats if the user requires it. It can loft 300 kg into an equatorial orbit and 250 kg into a Sun-synchronous orbit. The complete vehicle measures about 20 meters long and is carried on an extended-length semi-trailer with full-length upper doors. Credit: Bill Sweetman/AW&ST

The biennial Zhuhai air show is a banquet for observers of Chinese defense technology. Although nuclear-capable missiles and the latest developmental and operational air force systems are absent, China’s policy of ensuring that there are multiple suppliers in all key areas results in many new programs at Zhuhai. This year, counterstealth technology and advanced missiles were in the forefront.