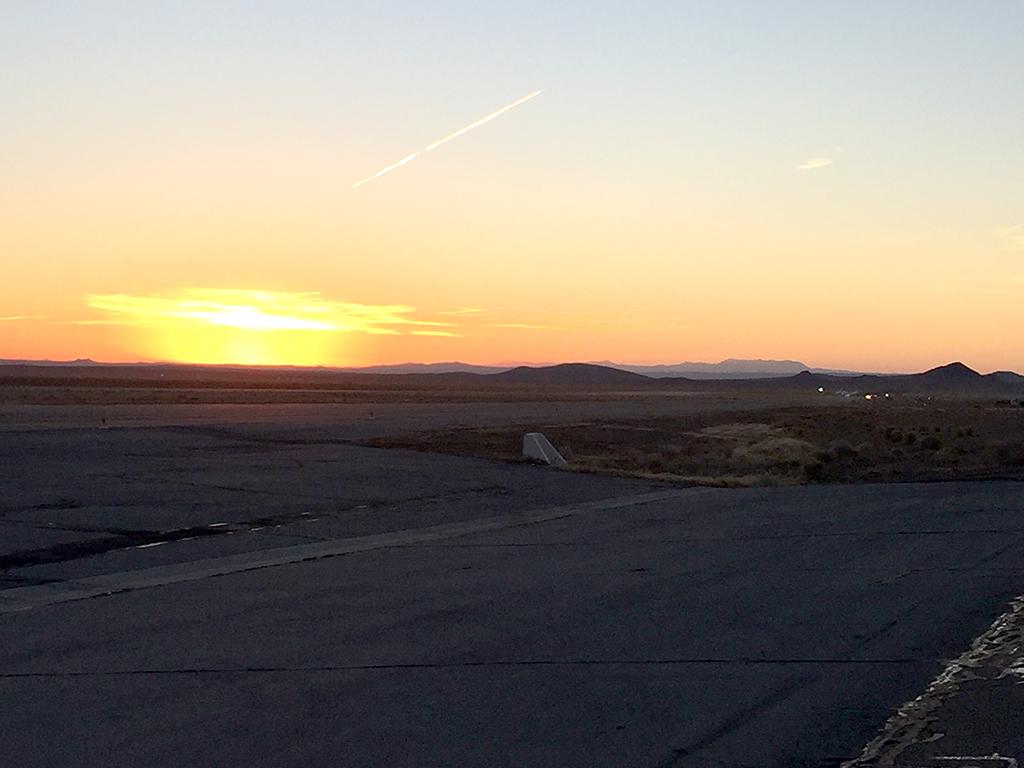 With its lights barely visible against the glow of the predawn sky, Virgin Galactic’s Unity is prepared for takeoff beneath the WhiteKnightTwo (WK2) carrier aircraft at the southeast end of Mojave Air and Space Port’s 9,500-ft.-long Runway 12-30. 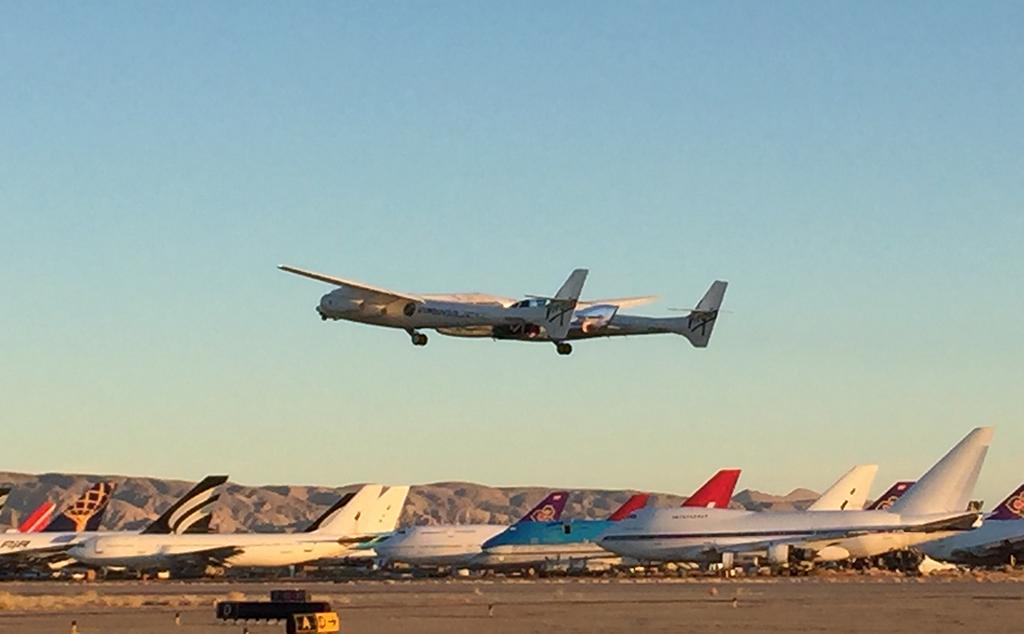 Airborne at 7:11 a.m., WK2 lifts off with Unity tucked in between the carrier aircraft’s twin fuselage booms as the rising Sun lights up a sea of mostly Boeing 747s in the Mojave boneyard. 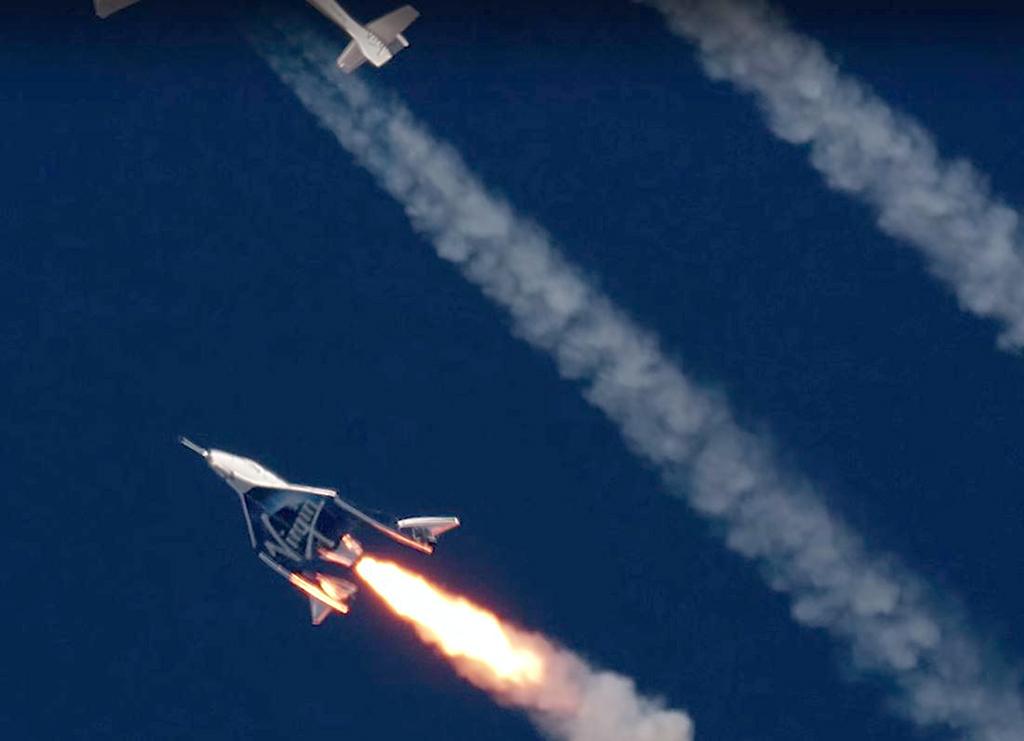 At 7:59 a.m., about 48 min. after takeoff, SpaceShipTwo is released from the carrier aircraft at 43,000 ft. and ignites its 65,000-lb.-thrust hydroxyl-terminated polybutadiene (HTPB)-fueled hybrid motor. 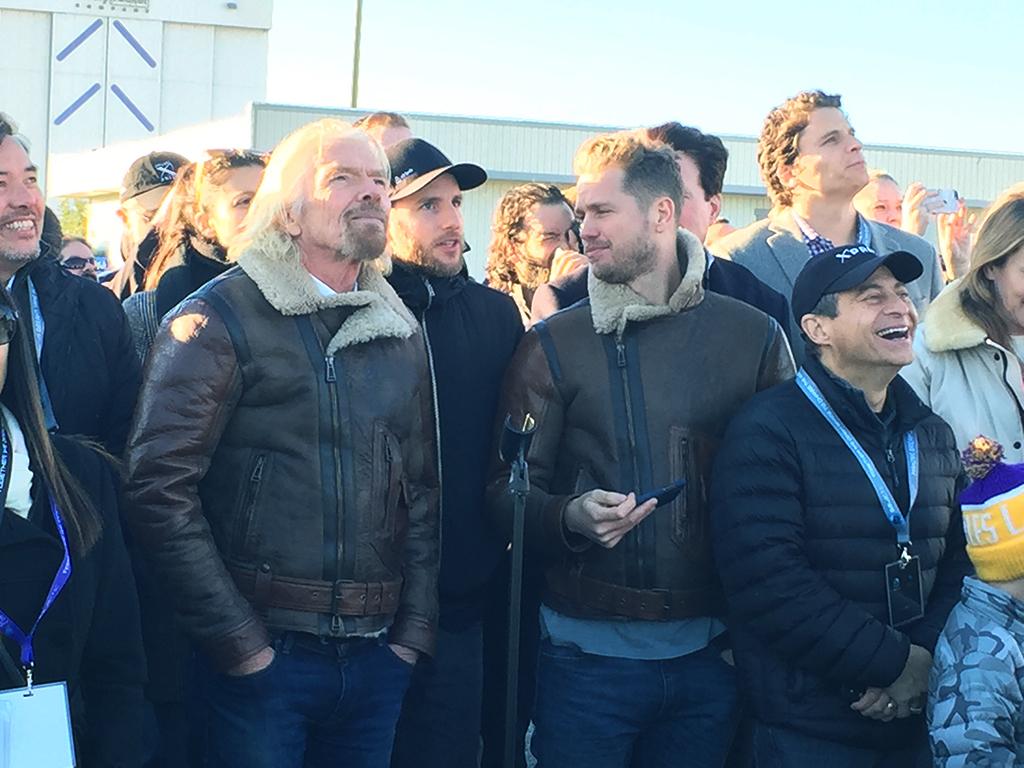 Richard Branson, together with his son Sam (center) and X Prize Foundation Chairman and founder Peter Diamandis (right), watch as Unity accelerates spaceward after completing the initial pitch up or "gamma" turn. 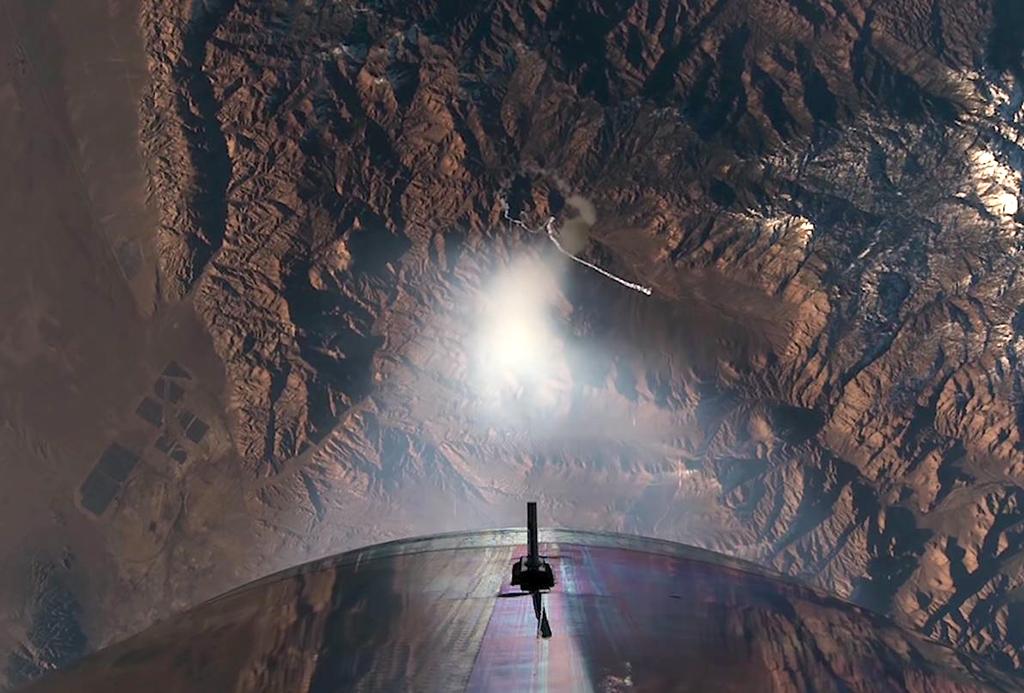 With the spiraling remains of its rocket plume still visible as a condensation trail far below, Unity’s hybrid motor ran smoothly and evenly before burning out at around 60 sec. The motor’s improved grain structure, composition and overall design gives a better quality ride than those experienced in 2004 by pilot Mike Melvill during the pioneering flights of SpaceShipOne. On one flight, webs of rubber extruded through the nozzle, causing such shaking and explosive noises in the cockpit that Melvill thought the tail had blown off. 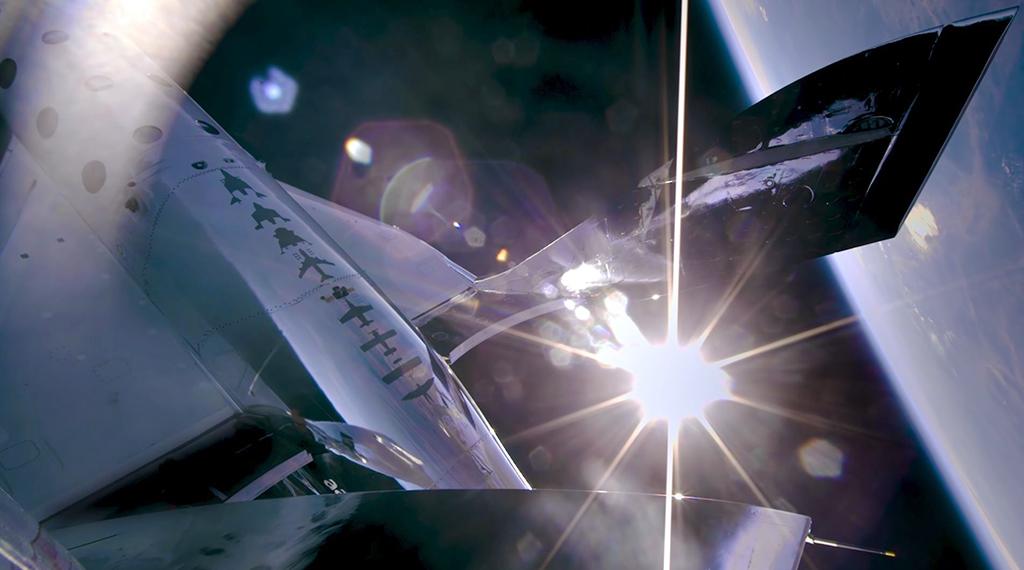 Coasting to an apogee of 271,684 ft. or 51.4 mi., the spaceplane’s feathering reentry system is fully deployed, assisting in pitching the vehicle up into an inverted attitude, from where passengers will be able to view the Earth through 12 windows in the sides and crown of the cabin. 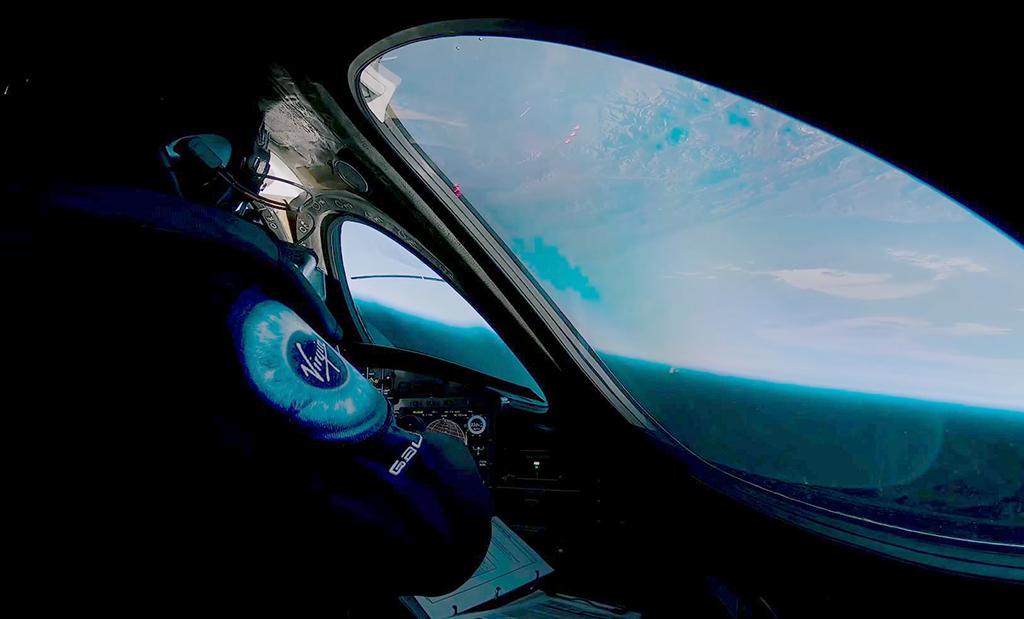 With the arc of the Earth clearly visible through the cockpit windows, the crew experienced microgravity and what pilot Mark "Forger" Stucky described as a “million-dollar view.” 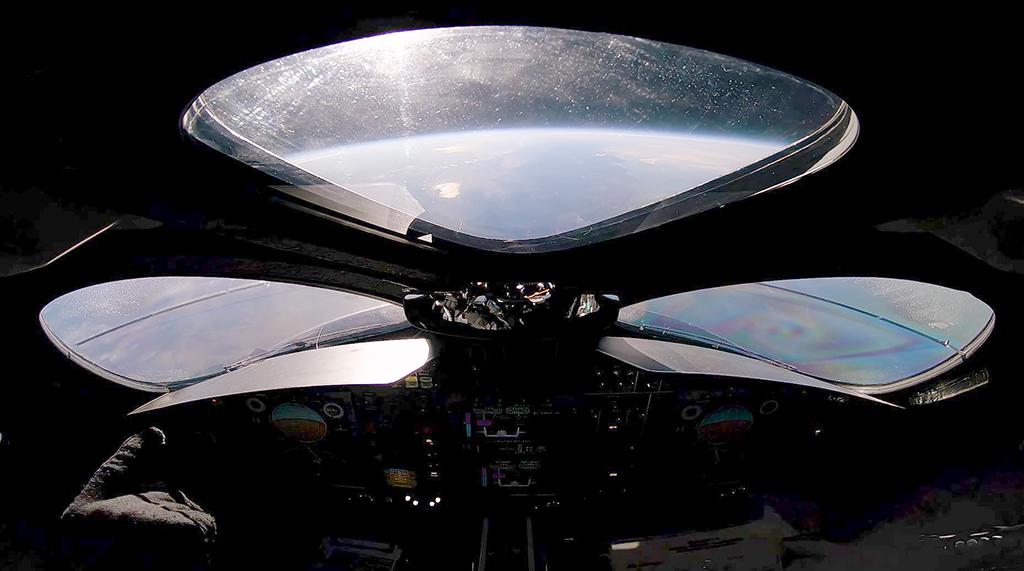 Well outside the sensible atmosphere, the crew used the cold gas reaction control system to orient Unity into an upright attitude for reentry. Positioning is aided by a "ghost" velocity vector on the primary flight display, which helps with the timing and setting of the correct reentry attitude. 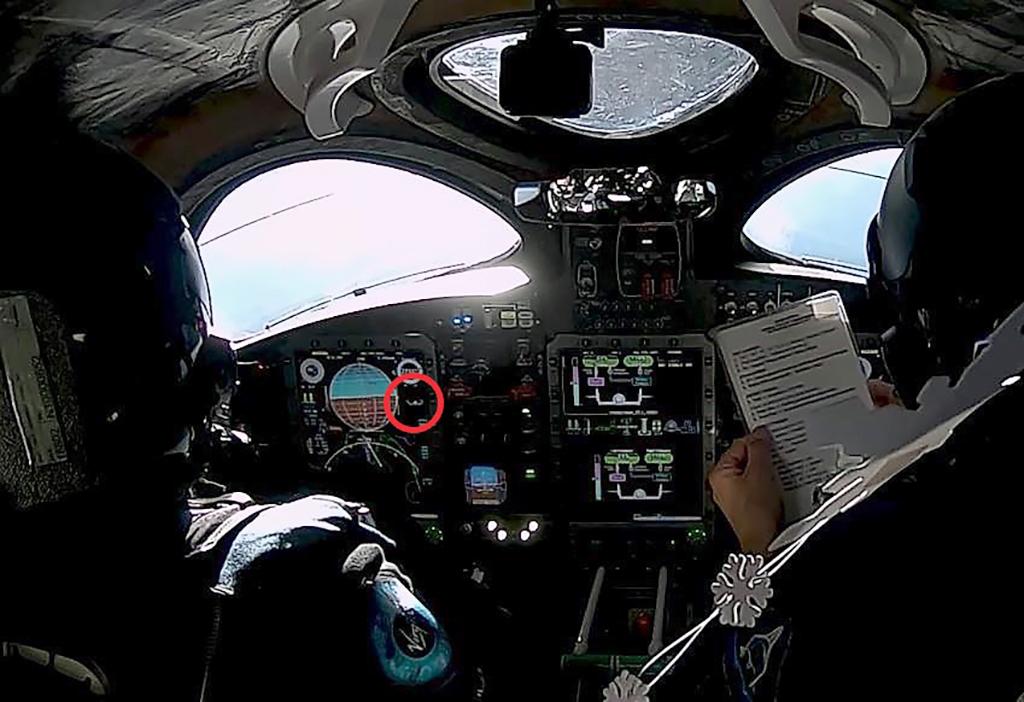 New displays on Unity include a peripheral cueing aid (circled in red) on the primary flight display to aid situational awareness of the spaceplane’s configuration, as well as other enhancements to enable clearer monitoring of roll boost commands.

At apogee Unity’s tail points north toward  the San Francisco Bay Area, with California’s Central Coast to the left and the snowcapped Sierra Nevada mountain range to the right. 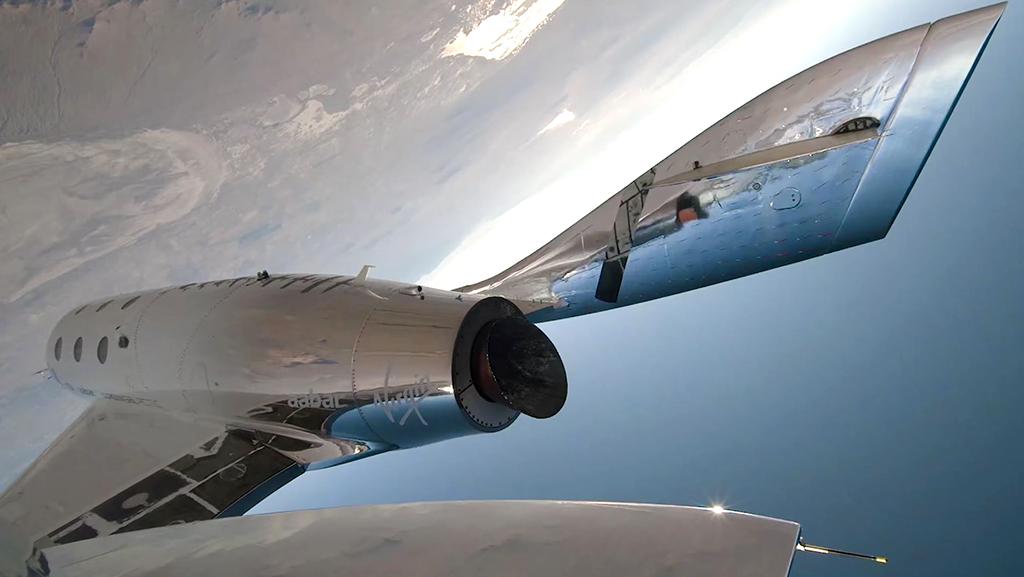 With the feathering reentry tails locked down the crew performed a roll during the return to Mojave. Although described by Branson as a "victory roll," Stucky says the maneuver was a legitimate test point for envelope expansion. Note the scarfed angle of the rocket nozzle, which is canted at around 20 deg. to assist with the gamma turn maneuver, as well as "tell-tale" tufts on the booms to help calibrate CFD models. 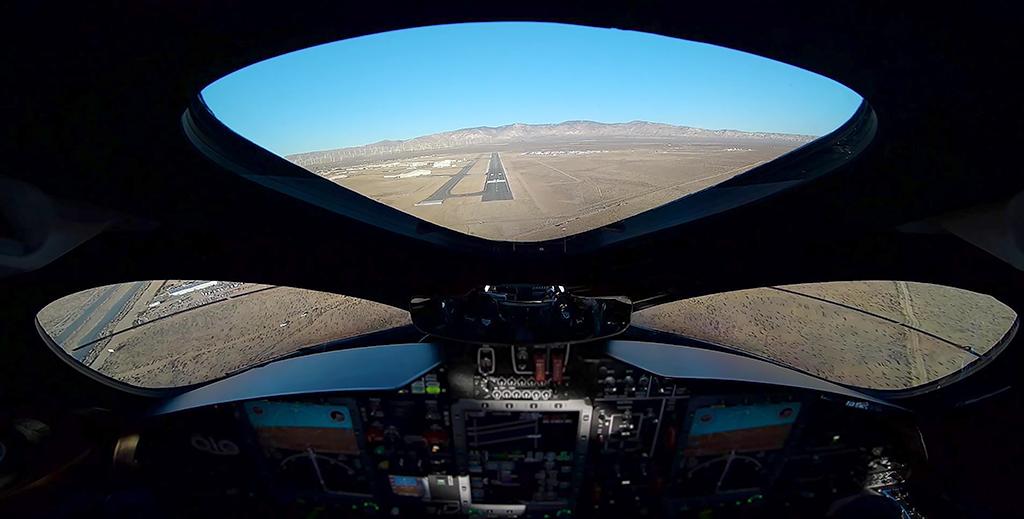 Unity lines up for landing on Mojave’s Runway 30, around 1 hr. 2 min. after departure. 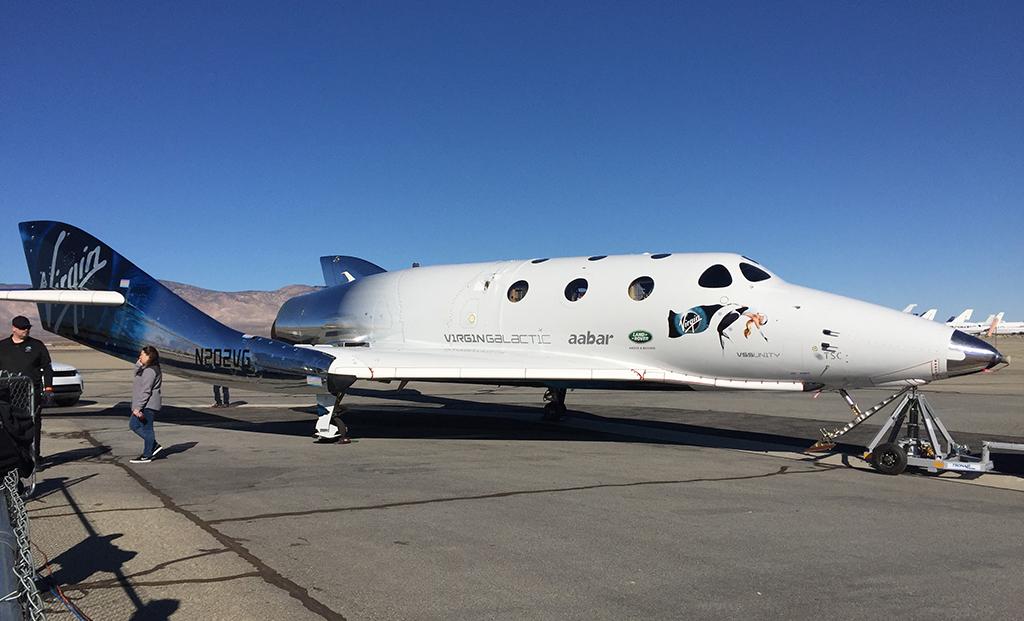 Unity rests on the ramp after its trip to suborbit. Visible through the cabin windows are racks of experiments carried aloft as part of NASA’s Flight Opportunities program, while the multicolored stripes and light spots on the Kapton film thermal protection system (TPS) by the starboard wingtip are heat sensors to help fine-tune the distribution of the finalized TPS. 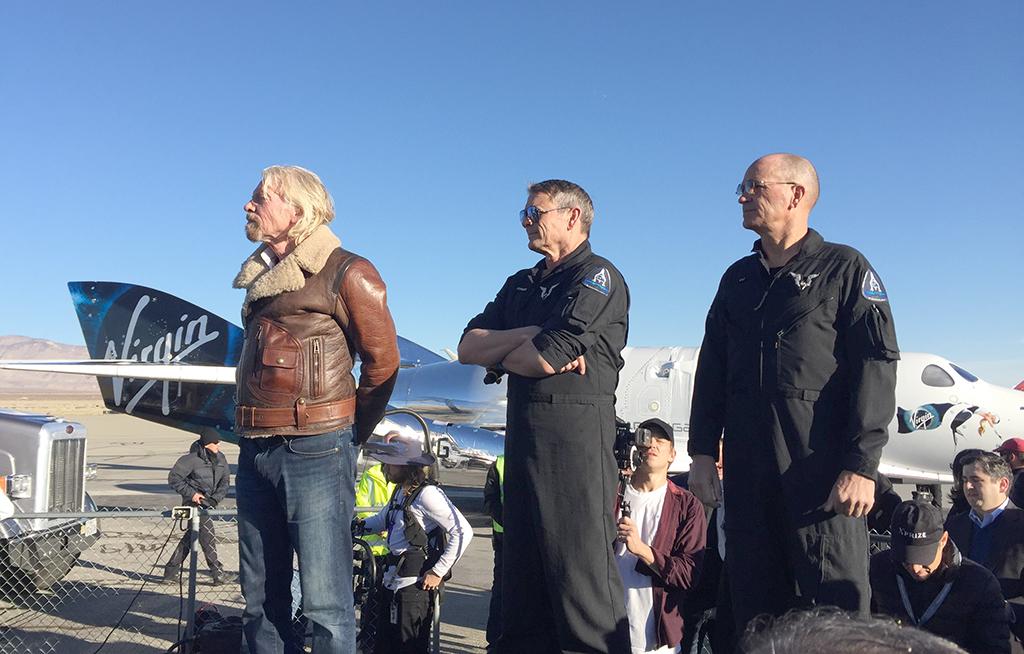 On Dec. 13, which marked its fourth powered flight, Virgin Galactic’s SpaceShipTwo suborbital spaceplane Unity rocketed at Mach 2.9 to an altitude of over 51 mi. above Southern California. Hailed as the first crewed flight to launch from U.S. soil since the retirement of the space shuttle in 2011, the flight went higher and faster than any previous Virgin test mission and sets the scene for the long-anticipated beginning of commercial space flights in 2019.