Oshkosh Takes a Shot on Space 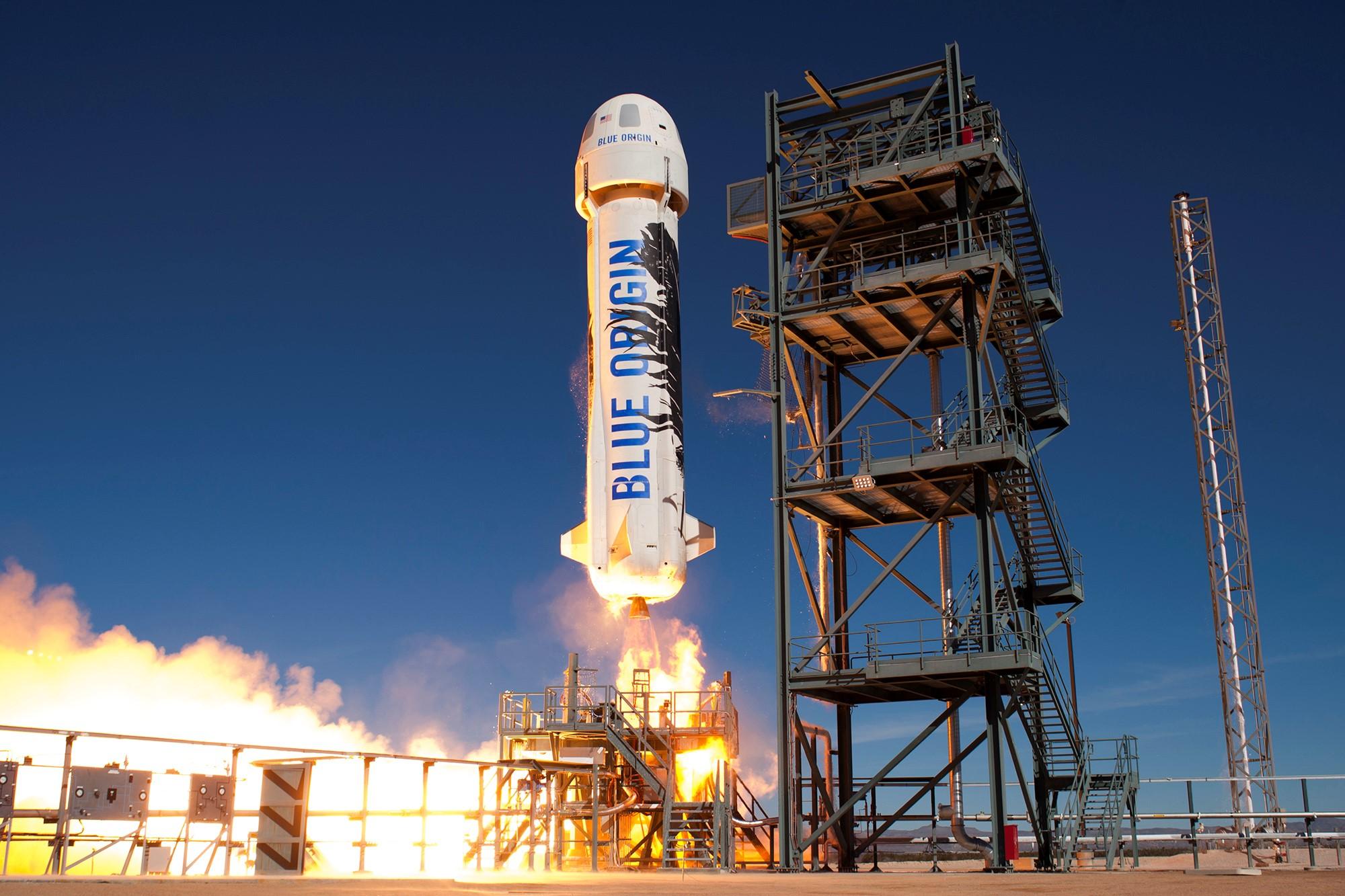 On Nov. 23, 2015, Blue Origin’s New Shepard became the first rocket to ascend above the Karman line (100 km or 62 miles, or 330,000 ft above the Earth's sea level, representing the boundary between the Earth's atmosphere and space) and successfully return to Earth for a vertical landing. The same booster made four subsequent flights in 2016—on Jan. 22, April 2, June 19 and Oct. 5—successfully demonstrating the reuse of a rocket for the first time. Now it’s on display at this year’s EAA AirVenture. 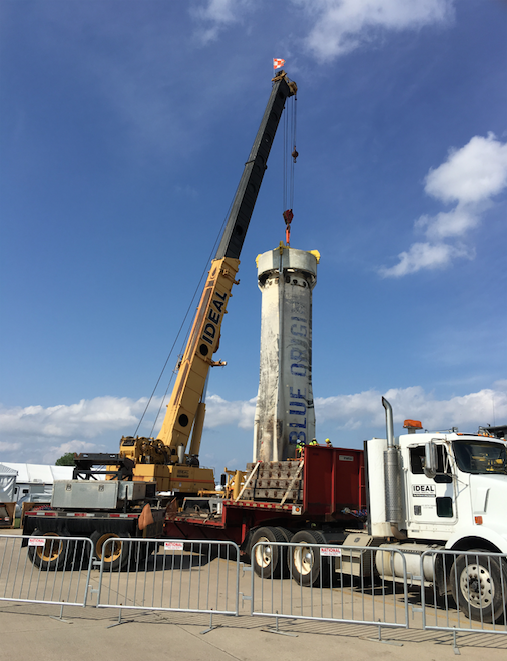 They Won’t Fire It Here

“I was asked here to lift a silo,” the crane driver told us. “Instead, I find it’s a rocket!” It took days to set up the Blue Origin launcher at EAA Oshkosh. It’s display here, with a mockup of the astronaut crew capsule, was largely due to EAA board member Charlie Precourt, who flew four Space Shuttle missions and now works for ATK, which makes parts for Blue Origin booster rocket. It’s been displayed publicly only twice before.

“We hope to inspire the explorers of tomorrow, the ones who will help us achieve Blue Origin’s goal of millions of people living and working in space,” says Rob Meyerson, president of Blue Origin. 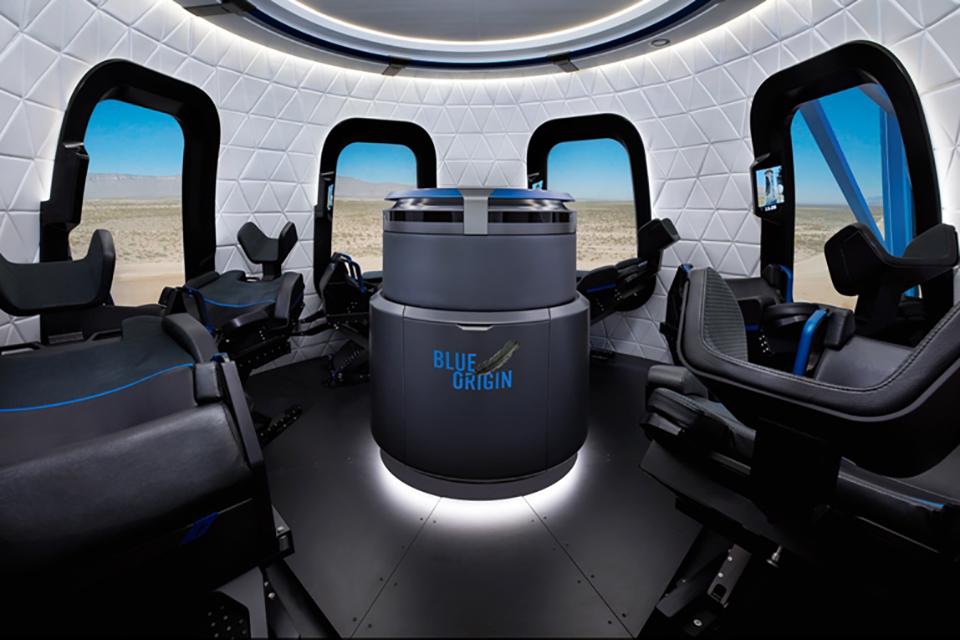 A Capsule With a View

Blue Origin’s exhibit features a full scale mockup of New Shepard’s astronaut crew capsule, which has seating for six people. AirVenture visitors can climb inside, recline in flight-ready seats and experience a simulated flight to space created with real mission footage from New Shepard’s on board cameras. The crew capsule features the largest windows in spacecraft history, which take up more than one-third of the capsule’s surface area offering every astronaut stellar views during flight. 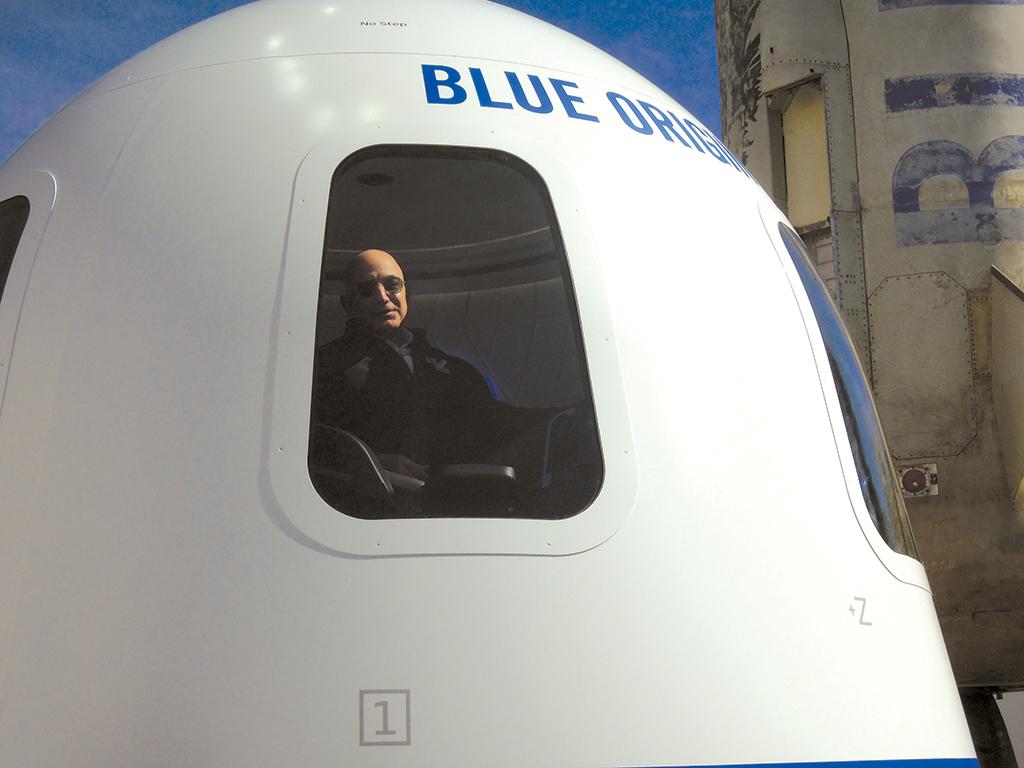 A Billion a Year

Was It Really That Long Ago

Astronauts from most of the Apollo missions that put humans on the moon will gather here Friday evening to commemorate the 50th anniversary of the Apollo program. They are expected to include Frank Borman (Apollo 8), Walt Cunningham (Apollo 7), Buzz Aldrin (Apollo 11), Fred Haise (Apollo 13), Jim Lovell (Apollo 8 and Apollo 13), Al Worden (Apollo 15), and Harrison “Jack” Schmitt (Apollo 17). To commemorate the reunion, EAA commissioned a mission patch similar to those affixed to the astronauts’ space suits, designed by Tim Gagnon, the artist behind several of the mission patches for NASA’s space shuttle program. 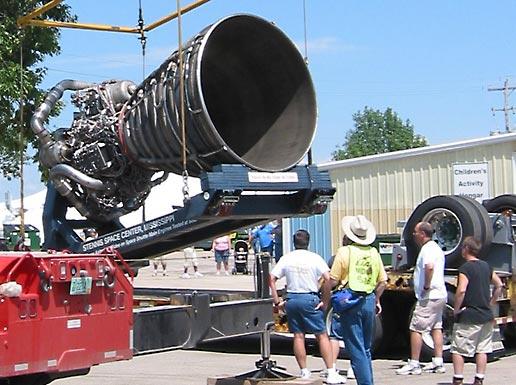 Most Powerful Engine at Oshkosh

2006: NASA exhibited a full-scale Aerojet Rocketdyne RS-25 Space Shuttle main engine outside its pavilion at EAA AirVenture. Designed and manufactured in the U.S.  by Rocketdyne, the RS-25 burned cryogenic liquid hydrogen and liquid oxygen propellants, with each engine producing 1,859 kN (418,000 lbf) of thrust at liftoff. 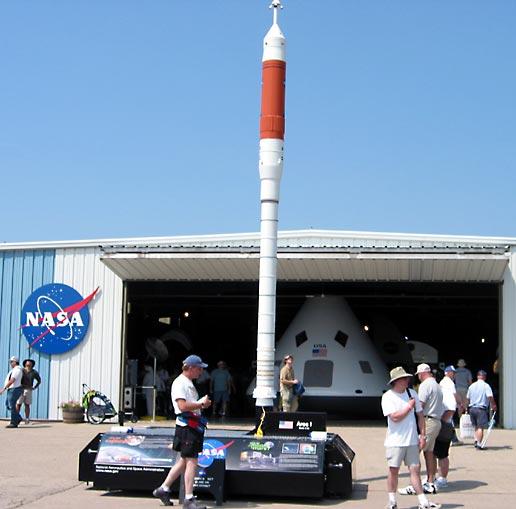 Also part of NASA’s 2006 space exhibit was this 30-foot tall model of the Ares I rocket proposed for the Constellation program’s Crew Launch Vehicle, as well as interactive demonstrations featuring a "pocket rocket" and liquid nitrogen. Constellation and  Ares I were canceled by U.S. President Barack Obama in October 2010. 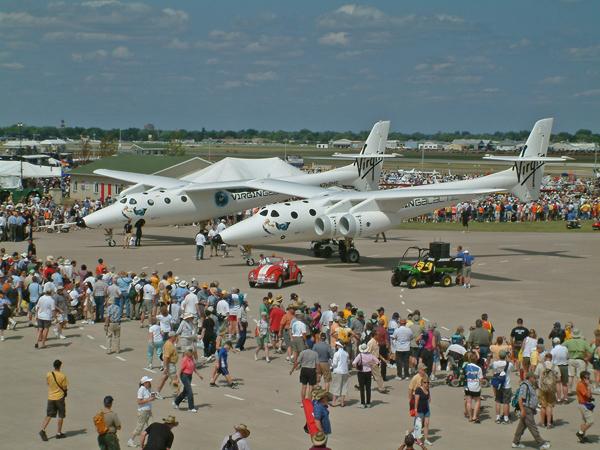 Over to Private Enterprise

Virgin Galactic almost stole the show at EAA AirVenture 2009 by flying in the WhiteKnightTwo mothership, but it had to share central stage with the Airbus A380. Five years earlier, Scaled Composites won the Ansari X-Prize for the first private human spaceflight with the WhiteKnight/SpaceShipOne combination. 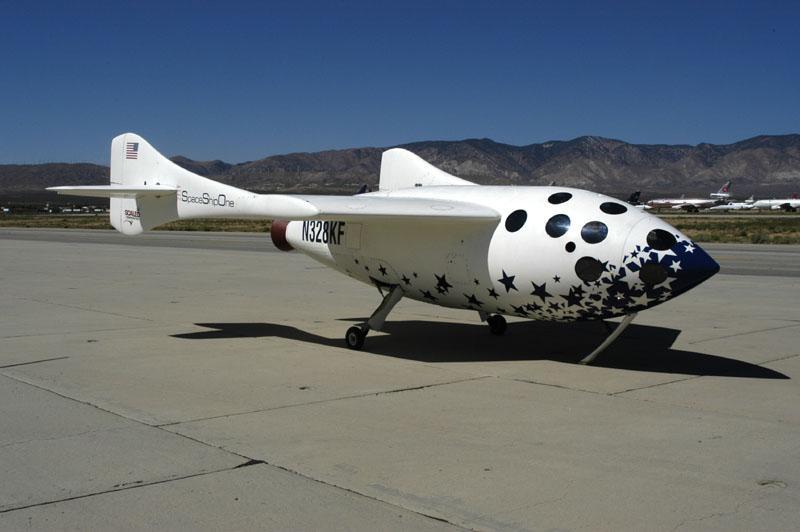 The original SpaceShip1 now hangs in honor in the Smithsonian Air & Space Museum but an extremely accurate replica, made from the original molds, can be seen in the EAA Museum here at Oshkosh. The replica even has a feathering tail, just as the original uses for descent, but the EAA version is worked by external cables instead of internal actuators. 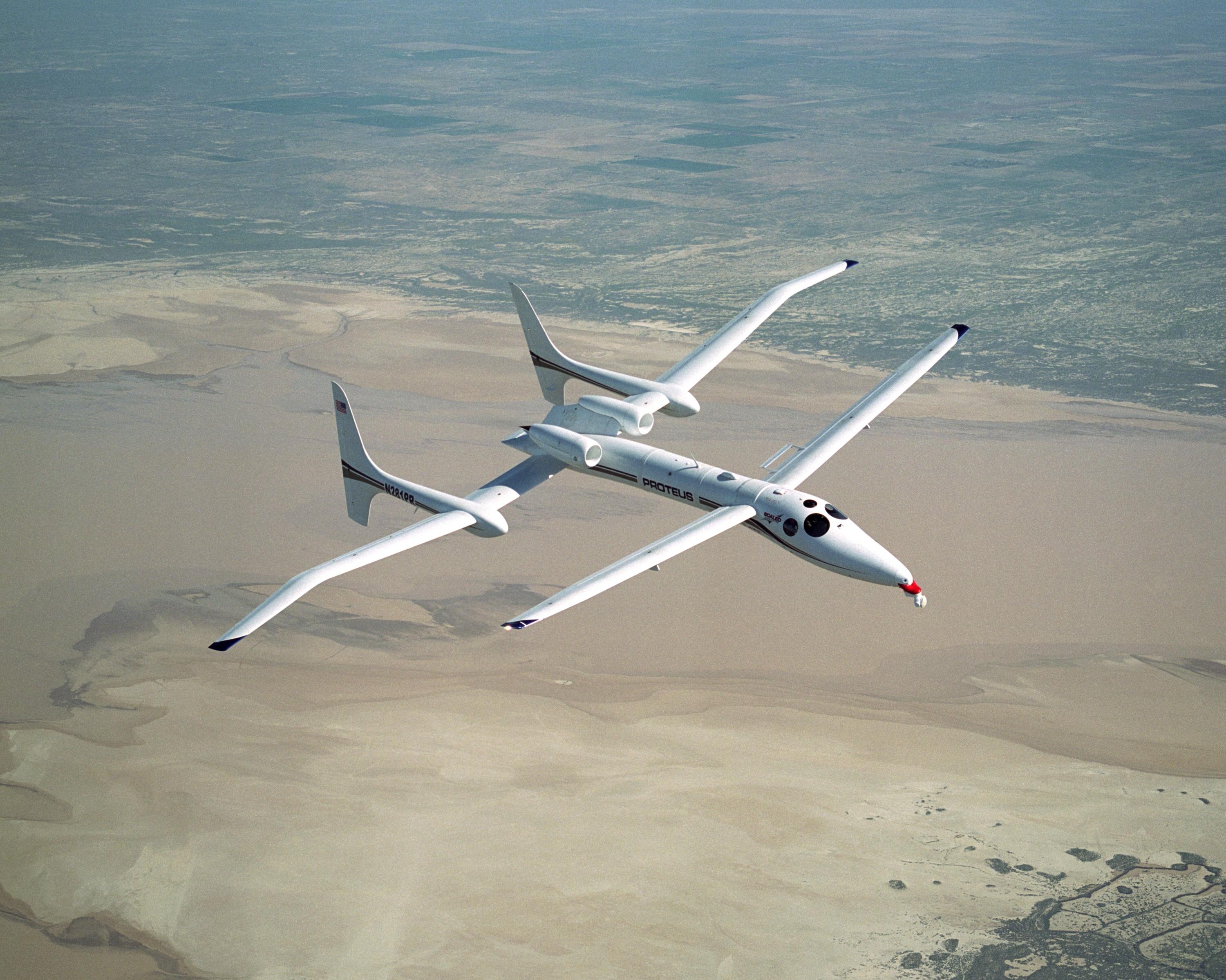 Scaled Composites’ high-altitude, long-endurance Proteus pseudo-satellite aircraft was unveiled in 1998, and starred at EAA Oshkosh the following year. This week it returns to the show as part of the celebration of 40-years of designs by company founder Burt Rutan. Proteus is a potentially optionally piloted multi-mission vehicle that can carry various payloads on a ventral pylon and orbit a point at over 60,000 ft for more than 18 hr. 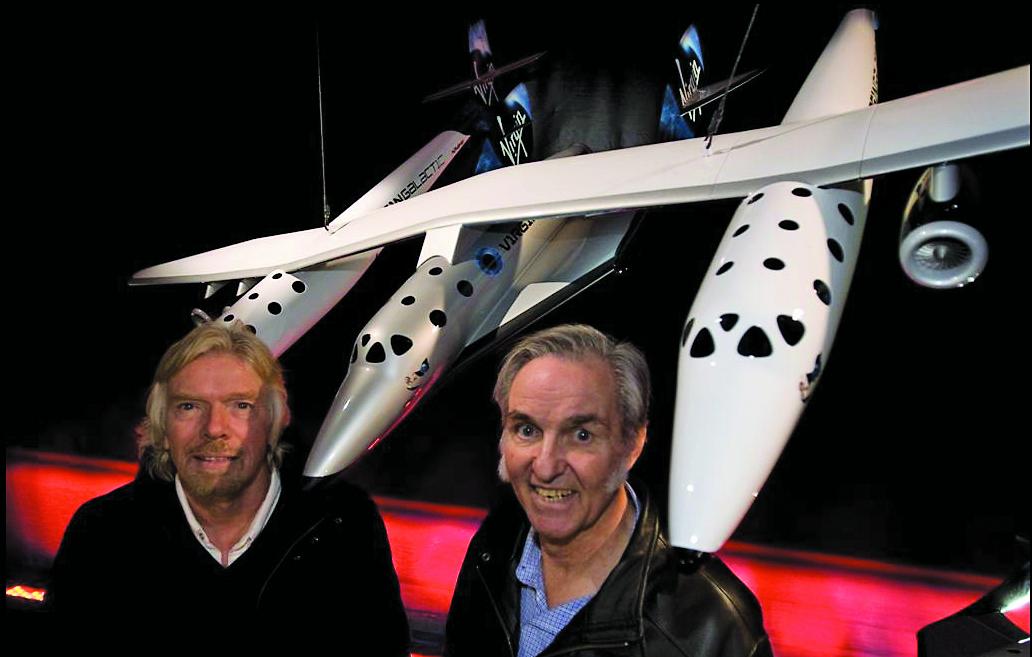 2009: Sir Richard Branson and aerospace pioneer Burt Rutan posed with a rendering of Virgin Galactic’s WhiteKnightTwo mothership and SpaceShipTwo. At EAA AirVenture that year Branson announced that An Abu Dhabi investment group would acquire a 32% stake in Virgin Galactic for $280 million with plans to use the WhiteKnightTwo motherships to launch small satellites as well as carry small tourism spaceships to the upper atmosphere.

“If you can't get inspired about wanting to go to space I'm not sure that you should be in the aviation field,” says Jack Pelton, chairman and CEO of the Experimental Aviation Association (EAA). What could be more inspiring at this year’s AirVenture than Jeff Bezos’ Blue Origin reusable rocket and crew capsule (the empty, five-times-to-space launcher dominates Boeing Plaza), and Friday evening’s formal reunion of eight lunar mission Apollo astronauts, some 50 years after the tragic launch accident to Apollo 1 at the very beginning of the program.

“We started inspiring people to build their own airplanes and fly them,” says Pelton. “We are trying to inspire people to get into any form of aviation, and space is just another one of those areas we are highlighting. We've been going forward with more and more commercial space from an innovation standpoint, and another big focus of ours is innovation.”NASA has long been an exhibitor at EAA AirVenture with its own pavilion, featuring space and exploration as well as innovation in aerospace. And in 2009 Sir Richard Branson brought the White Knight Two launch vehicle to Oshkosh.

A full-scale replica of the SpaceShipOne rocket craft that it carries is on display in the EAA Museum. Scaled Composites of Mojave, California, a pioneer of innovative  aircraft and spacecraft founded by EAA icon Burt Rutan, has a strong presence at Oshkosh this year. It designed and built the WhiteKnight and SpaceShipOne, as well as the massive Stratolaunch aircraft that was rolled out of its hangar for the first time on May 31. Returning to Oshkosh this year after first visiting in 1999 is its high-altitude Proteus aircraft, envisaged as an economic pseudo-satellite.