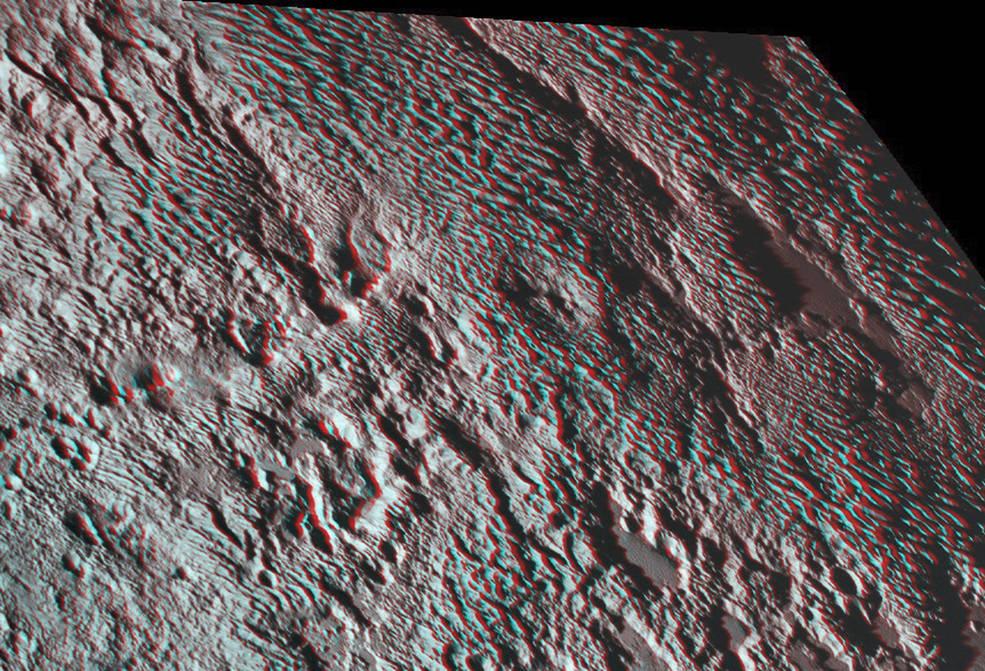 At the end of March 2016, NASA's website zeroed in on landforms spotted by the New Horizons spacecraft. Of particular interest was “bladed” terrain just east of the Tombaugh Regio, the informal name given to Pluto’s large heart-shaped surface feature.

New Horizons scientists have speculated about (but not yet agreed on) the terrain’s origins. Current theories include erosion from evaporating ices or deposition of methane ices; New Horizons researcher Orkan Umurhan takes an in-depth look at the terrain – and proposes another origin idea – in a recent NASA Web blog. 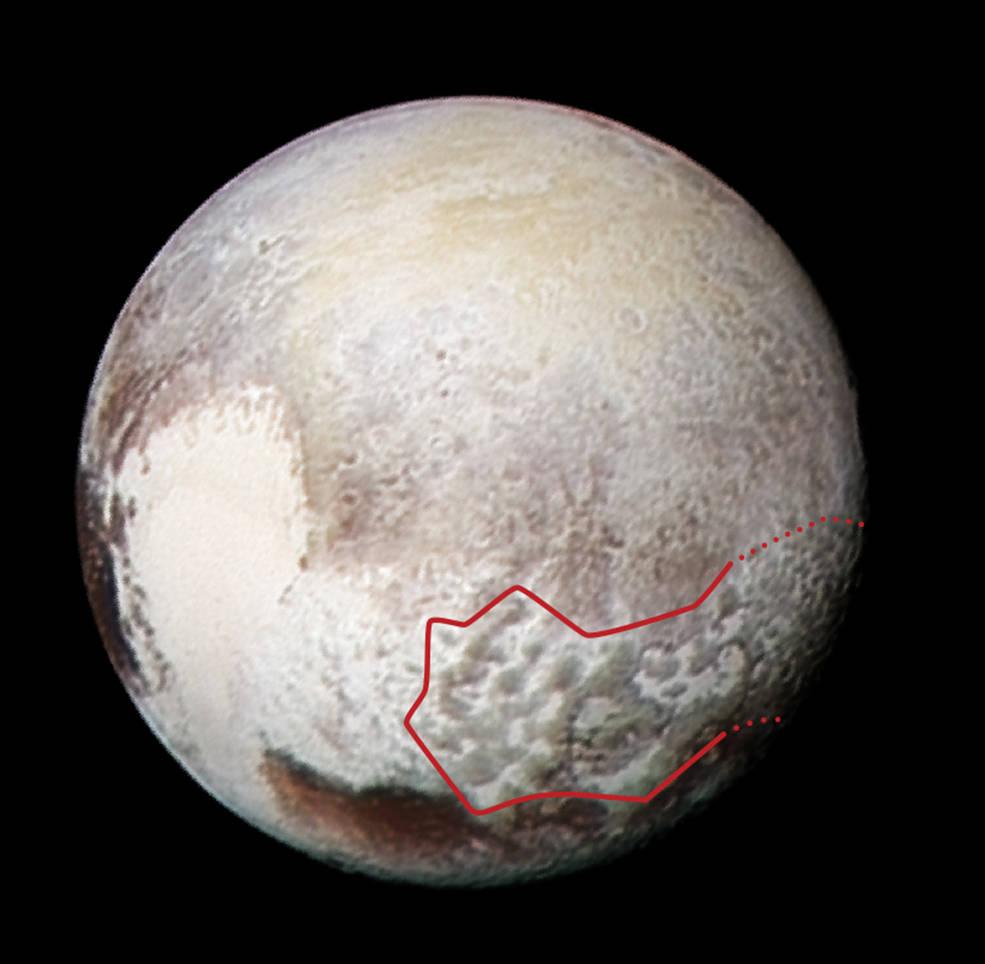 For further explanation about this image taken by the Long Range Reconnaissance Imager (LORRI), see NASA's website entry about the bladed terrain. 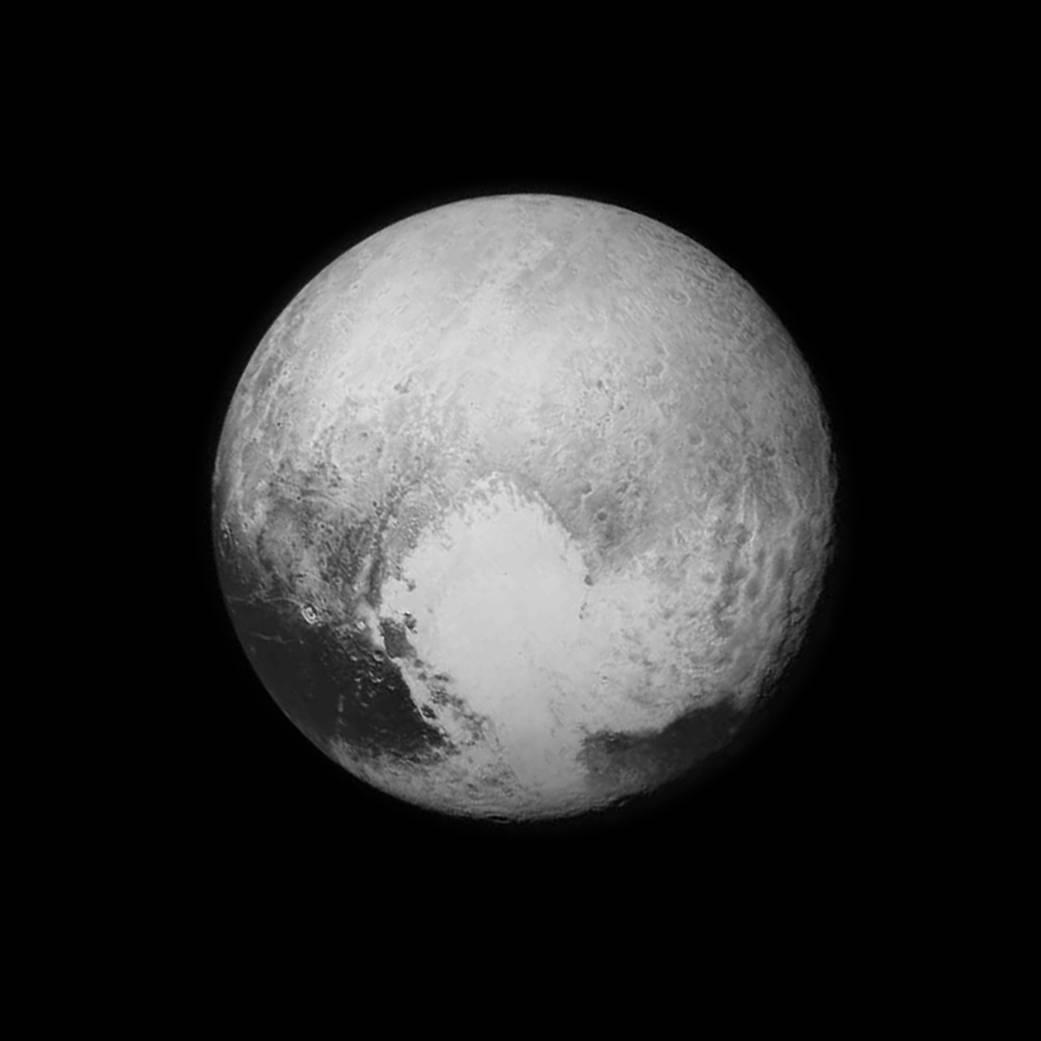 Pluto nearly fills the frame in this black and white image from the Long Range Reconnaissance Imager (LORRI) aboard NASA’s New Horizons spacecraft, taken on July 13, 2015, when the spacecraft was 476,000 mi. (768,000 km) from the surface. This is the last and most detailed image sent to Earth before the spacecraft’s closest approach to Pluto on July 14. 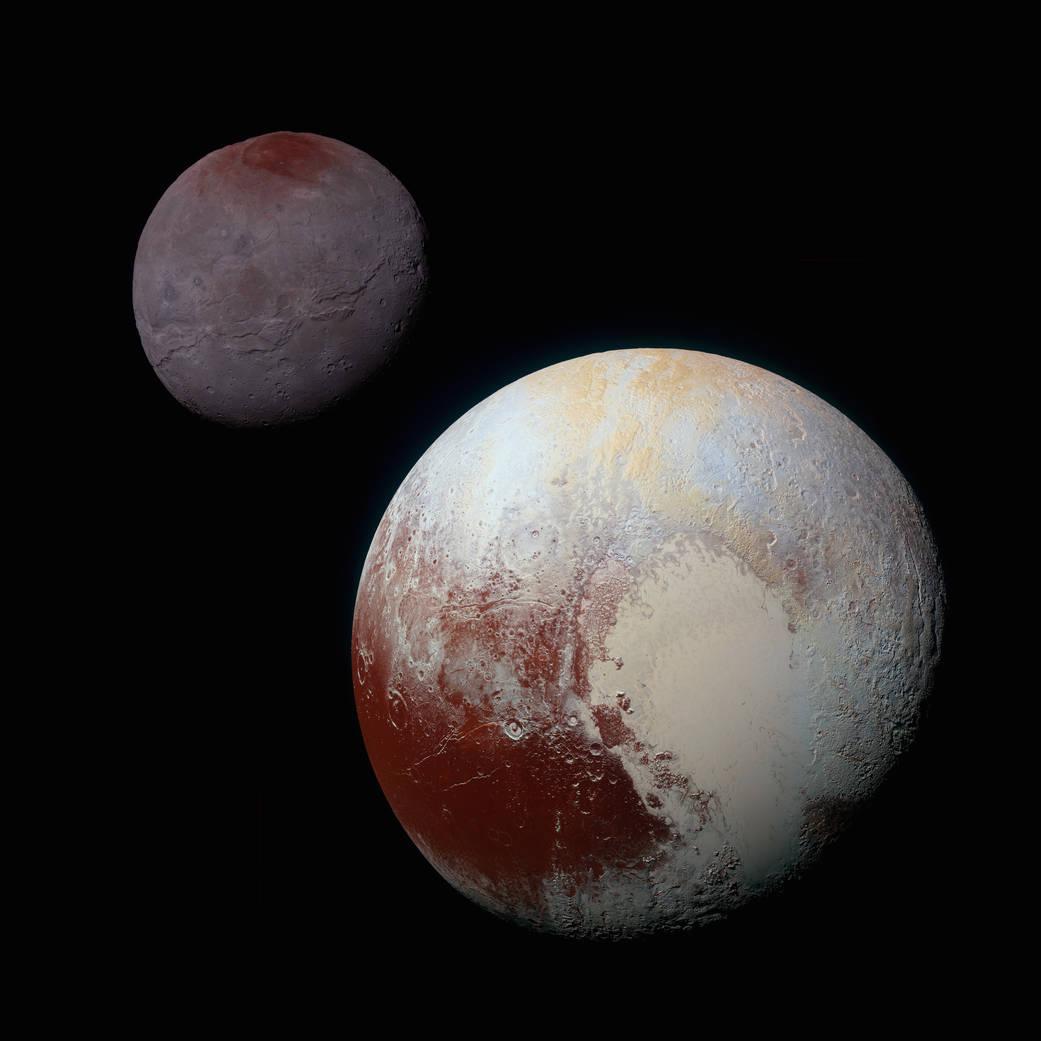 Striking Differences Between Pluto And Charon

Still disseminating in October 2015, the data from the images taken by New Horizons spacecraft during its July flyby, NASA explains how this "image highlights the striking differences between Pluto and Charon.

The color and brightness of both Pluto and Charon have been processed identically to allow direct comparison of their surface properties, and to highlight the similarity between Charon’s polar red terrain and Pluto’s equatorial red terrain." 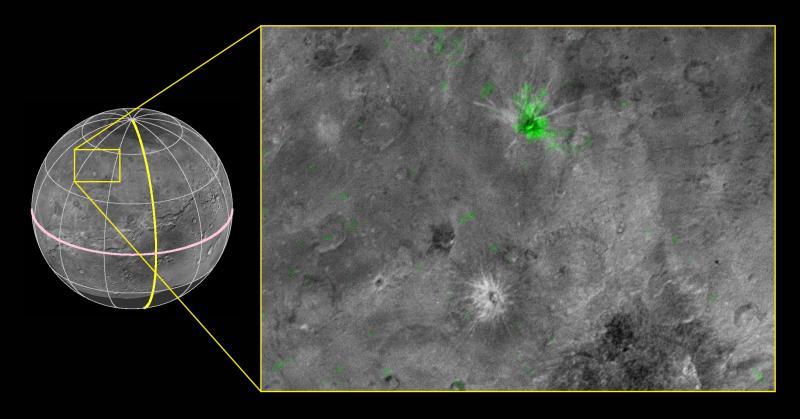 The curious patch of frozen ammonia (highlighted in green in the image) around a crater on Charon has been dubbed “Organa.” Working with high-resolution infrared data, the science team found the ejecta from a nearby crater they  named “Skywalker” is largely water ice, as is the surrounding terrain.

“Why are these two similar-looking and similar-sized craters, so near to each other, so compositionally distinct,” asks New Horizons Composition Team Lead Will Grundy of the Lowell Observatory. “We have various ideas when it comes to the ammonia in Organa. The crater could be younger, or perhaps the impact that created it hit a pocket of ammonia-rich subsurface ice. Alternatively, maybe Organa’s impactor delivered its own ammonia.”

Scientists are intrigued by the possibility that the ammonia originated deep within Charon, which “could help explain the formation of Charon’s surface by cryovolcanism, via the eruption of cold, ammonia-water magmas,” according to Washington University’s Bill McKinnon, deputy team lead for geology, geophysics and imaging. 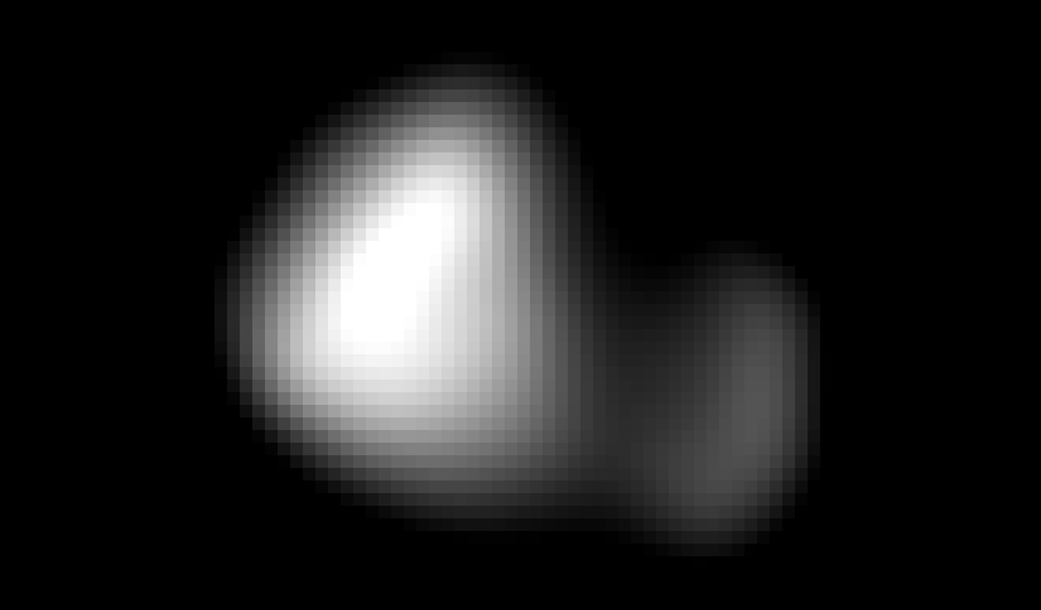 NASA explained that this image of Kerberos was created by combining four individual Long Range Reconnaissance Imager (LORRI) pictures taken on July 14, approximately 7 hr. before New Horizons’ closest approach to Pluto, at a range of 245,600 mi. (396,100 km) from Kerberos.

Kerberos appears to have a double-lobed shape, approximately 7.4 mi. (12 km) across in its long dimension and 2.8 mi. (4.5 km) in its shortest dimension. 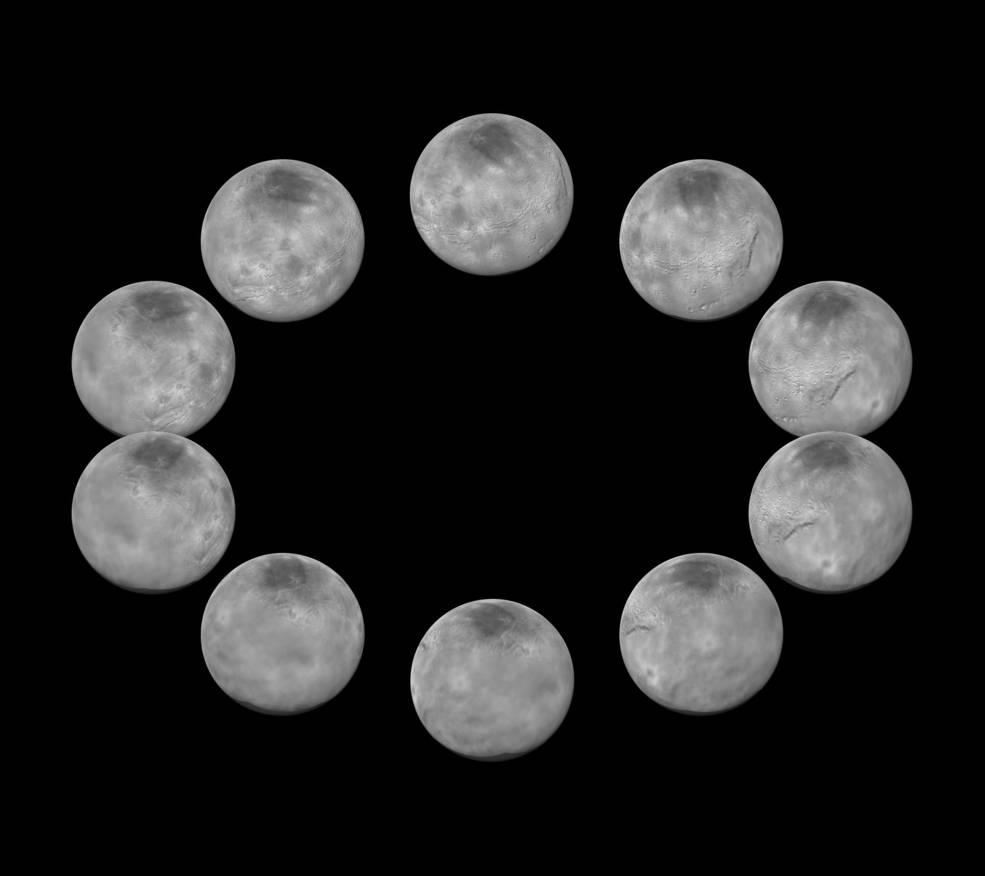 A Day In The Life Of Charon

On approach to the Pluto system in July 2015, the cameras on NASA’s New Horizons spacecraft captured images of the largest of Pluto’s five moons, Charon, rotating over the course of a full day. 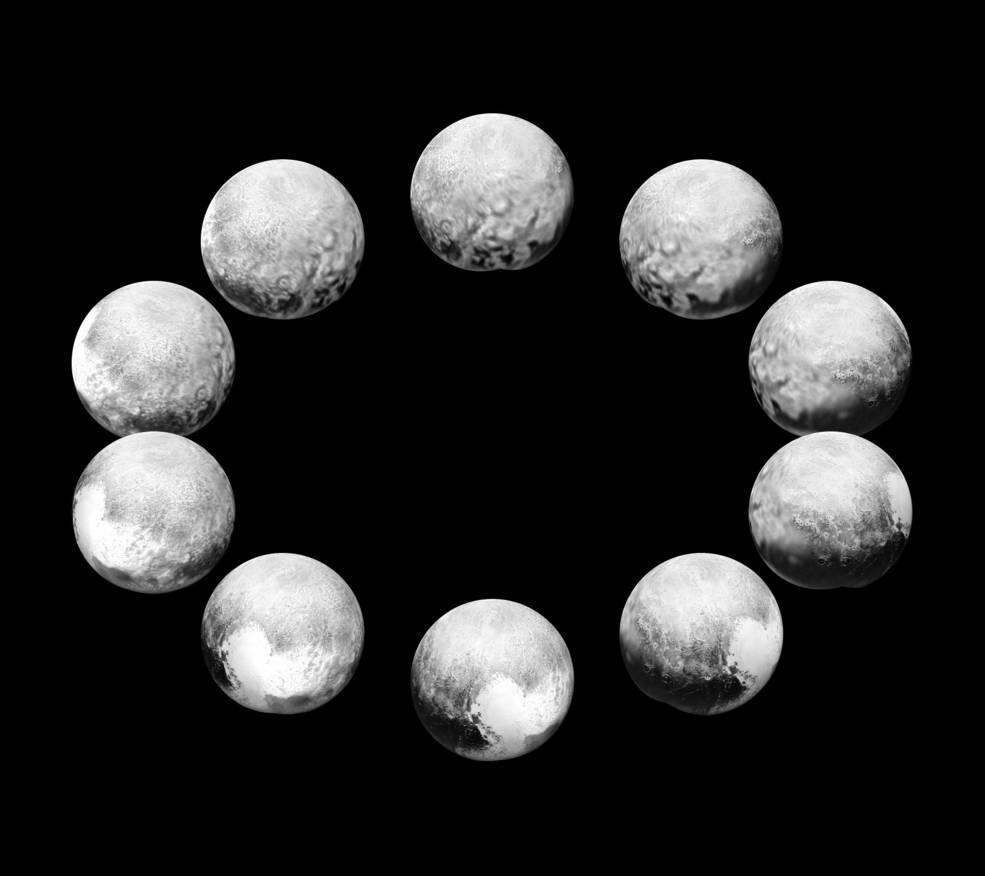 A Day In The Life Of Pluto

On approach in July 2015, the cameras on NASA’s New Horizons spacecraft captured Pluto rotating over the course of a full “Pluto day.”

These images and others like them reveal many details about Pluto, including the differences between the encounter hemisphere and the so-called “far side” hemisphere seen only at lower resolution. Dimples in the bottom (south) edge of Pluto’s disk are artifacts of the way the images were combined to create these composites, according to NASA's website. 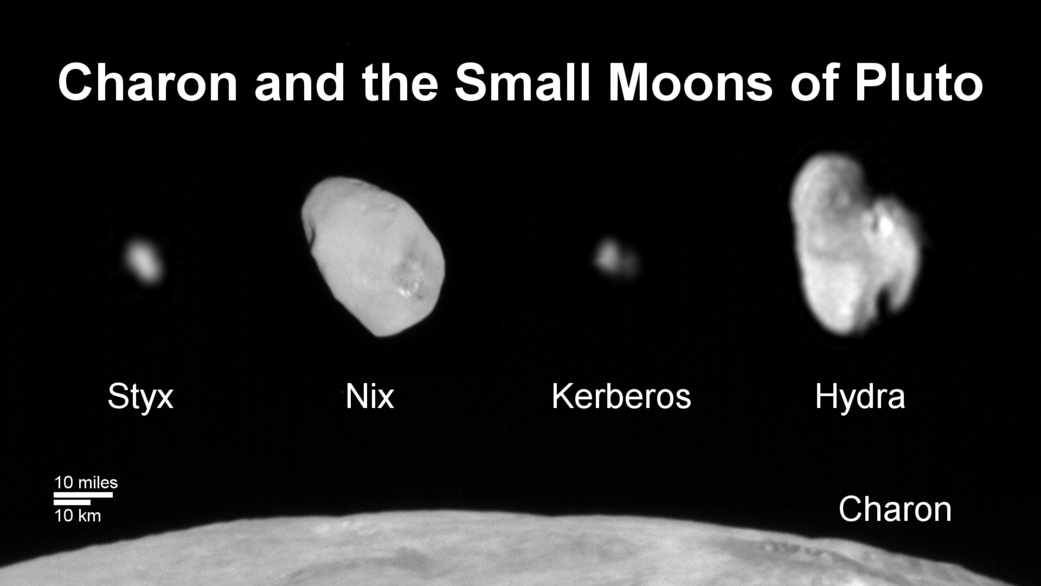 This composite image shows "a sliver of Pluto’s large moon, Charon, and all four of Pluto’s small moons, as resolved by the Long Range Reconnaissance Imager (LORRI) on the New Horizons spacecraft," according to NASA.

All four small moons have highly elongated shapes, a characteristic thought to be typical of small bodies in the Kuiper Belt. 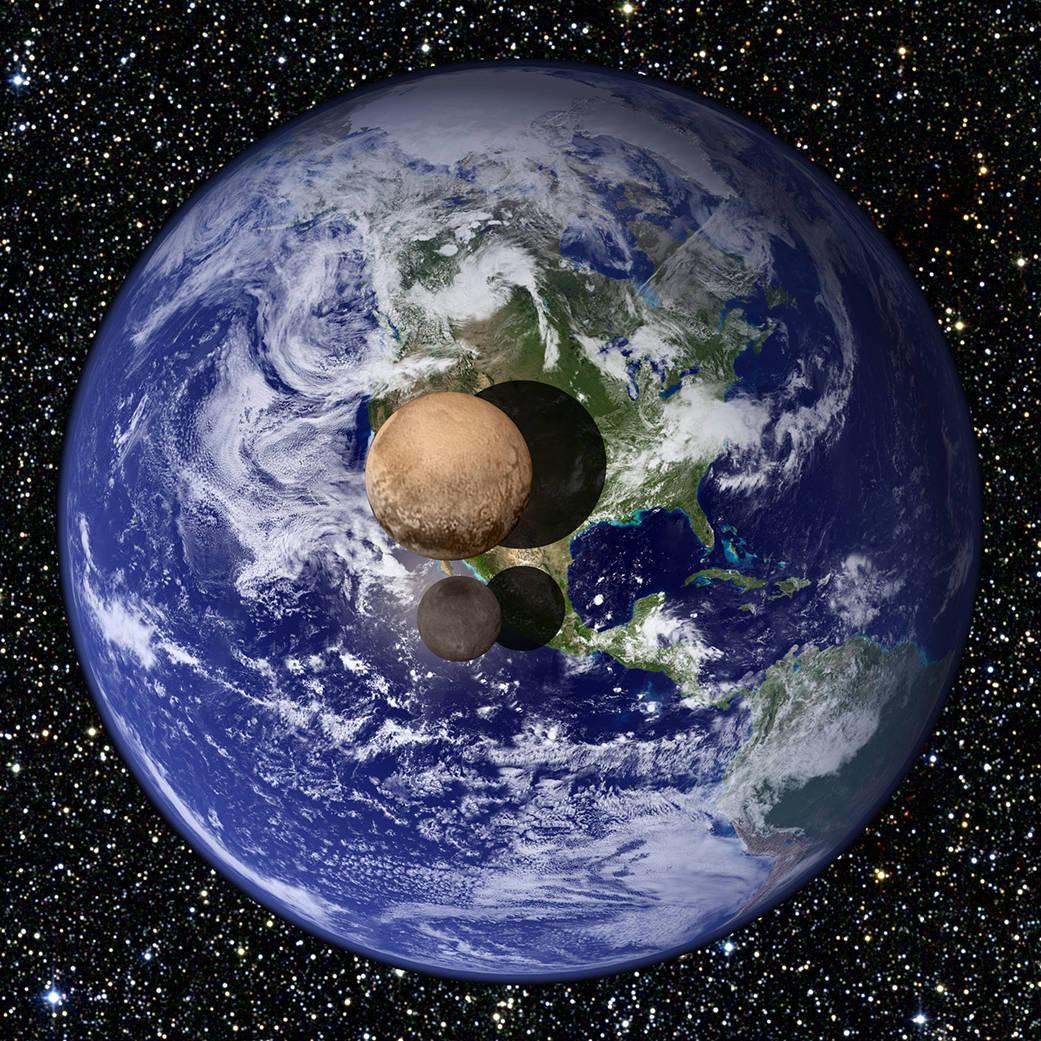 Measurements Of Pluto And Charon

NASA explains on its website: "This graphic presents a view of Pluto and Charon as they would appear if placed slightly above Earth's surface and viewed from a great distance." 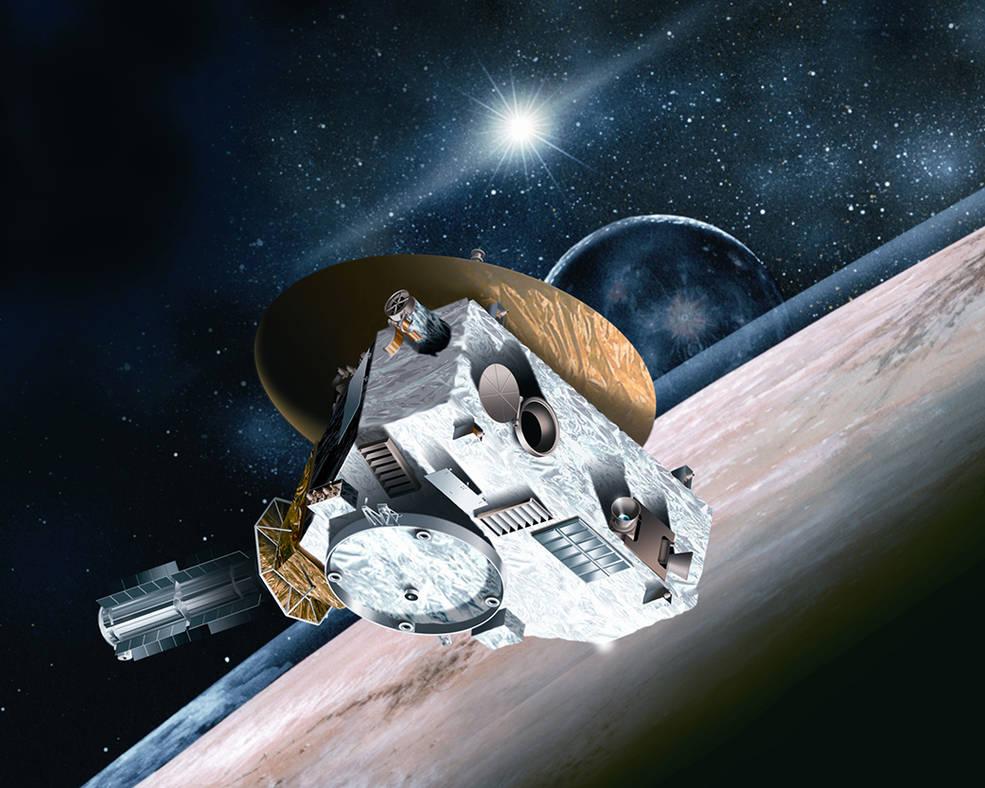 Reporting from Cape Canaveral, a week before the launch of  New Horizons, Aviation Week discusses the spacecraft's suite of seven sensors which will provide high-resolution data at Pluto, and it is hoped to learn more of the earliest building blocks of the Solar System.

Read the full article in our Archives, January 9, 2006

The New Horizons mission's goal is to investigate the deepest secrets of the Solar System, discover more about Pluto, its Moons and Kuiper Belt objects. Since the Pluto flyby in July 2015, new images have been trickling in to NASA. But interest in exploring Pluto can be traced back in our archives as far back as 1988 when a group of scientists discovered the planet's atmosphere.

The Pluto/Kuiper Express mission was planned as far back as 2001, but nothing came of it until 2006. In an issue of Aviation Week in early 2006, the mission was described as the most potent of U.S. planetry flight since the launch of Voyager 2.

Aviation Week described the impending launch of the New Horizons Pluto flyby spacecraft as a "a tour de force of rocketry, technology."

The spacecraft, expected to zoom past the Moon in just 9 hr. on the first mission to the dwarf planet, was "poised to become the fastest vehicle ever to depart Earth, blazing outbound at 10.07 mi. per sec. New Horizons velocity will be about 10,000 mph. faster than most previous Earth escape flights to the Moon and planets.

"Given the spacecraft's need for speed, the solution was to launch it on the biggest booster available to achieve the fastest velocity to reach Pluto 3 billion mi. away as early as July 2015."

The story was proved to be right on target, as New Horizons sped past Pluto last July.