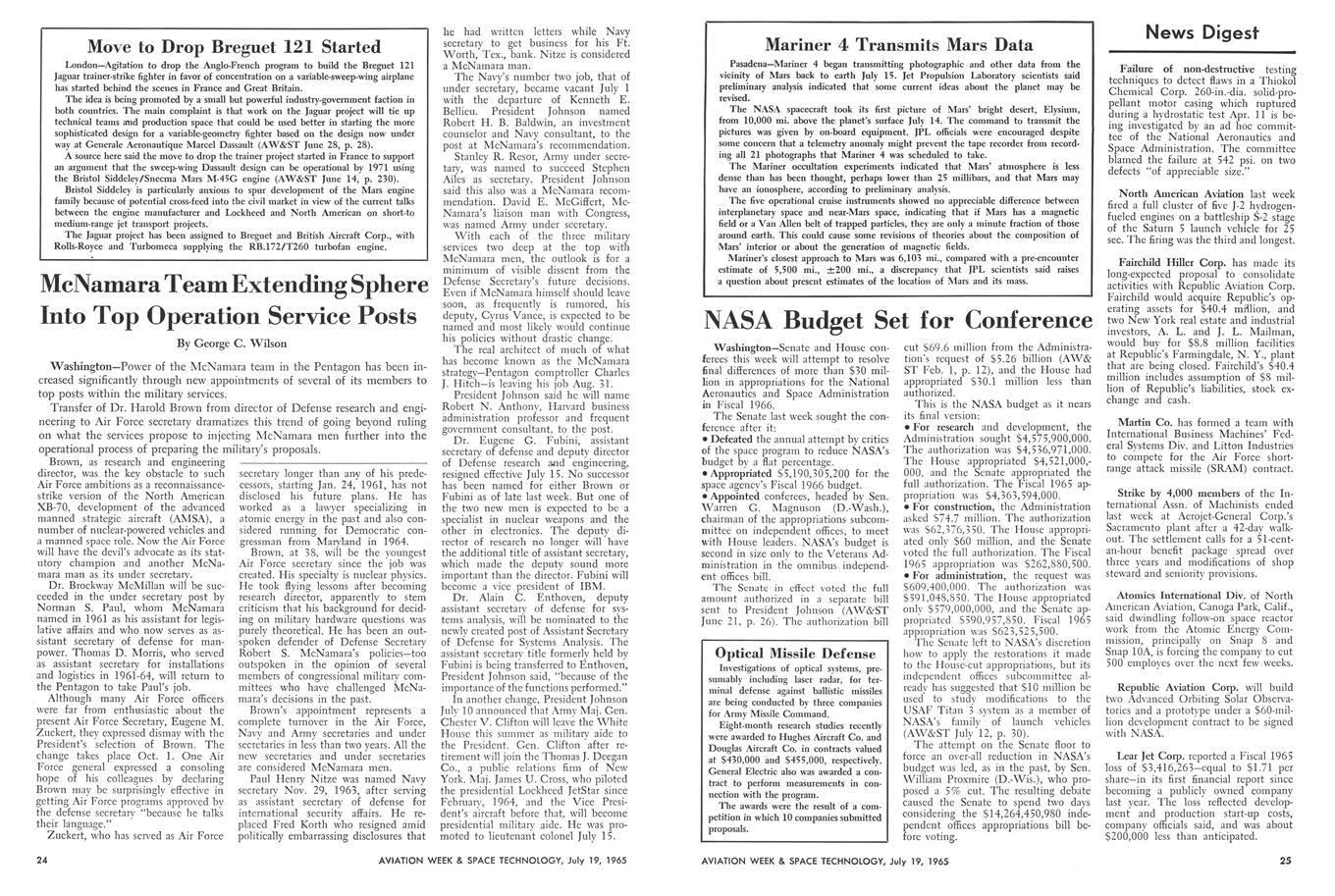 NASA spacecraft Mariner 4, which conducted the first successful flyby of the red planet, took its first photograph of Mars' bright desert Elysium Planitia, from 10,000 mi. above the planet's surface July 14, 1965.

Read the small article from the issue dated July 19, 1965 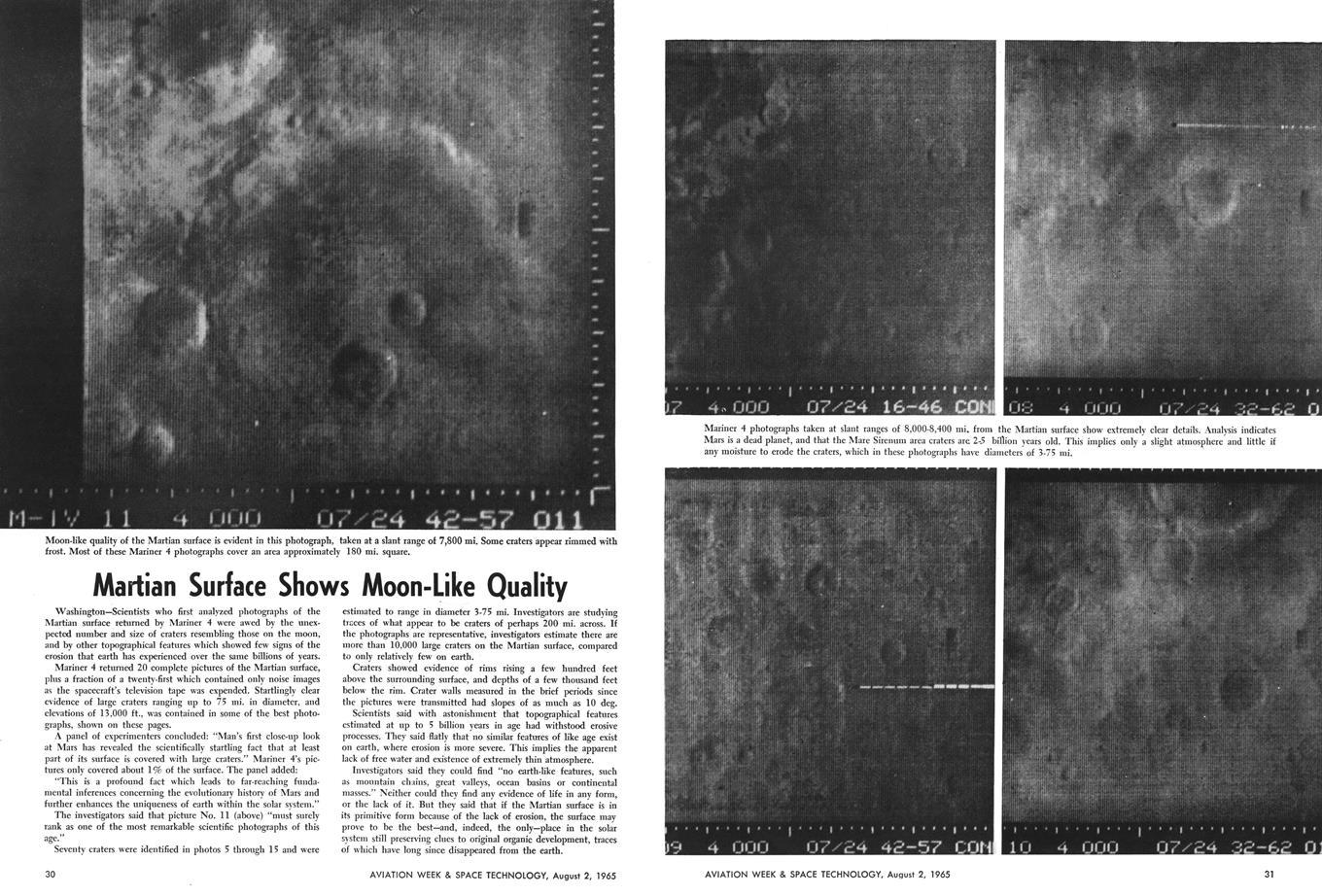 The first close-up pictures of the Martian surface were published in Aviation Week in the Aug. 2, 1965, issue.

Scientists on studying the images returned from Mariner 4 were awed by the unexpected number and size of craters resembling those on the Moon.

"They could find no Earth-like features like mountain chains, great valleys, ocean basins or continental bases. Neither could they find any evidence of life of any form. Or lack of it," the magazine reported. 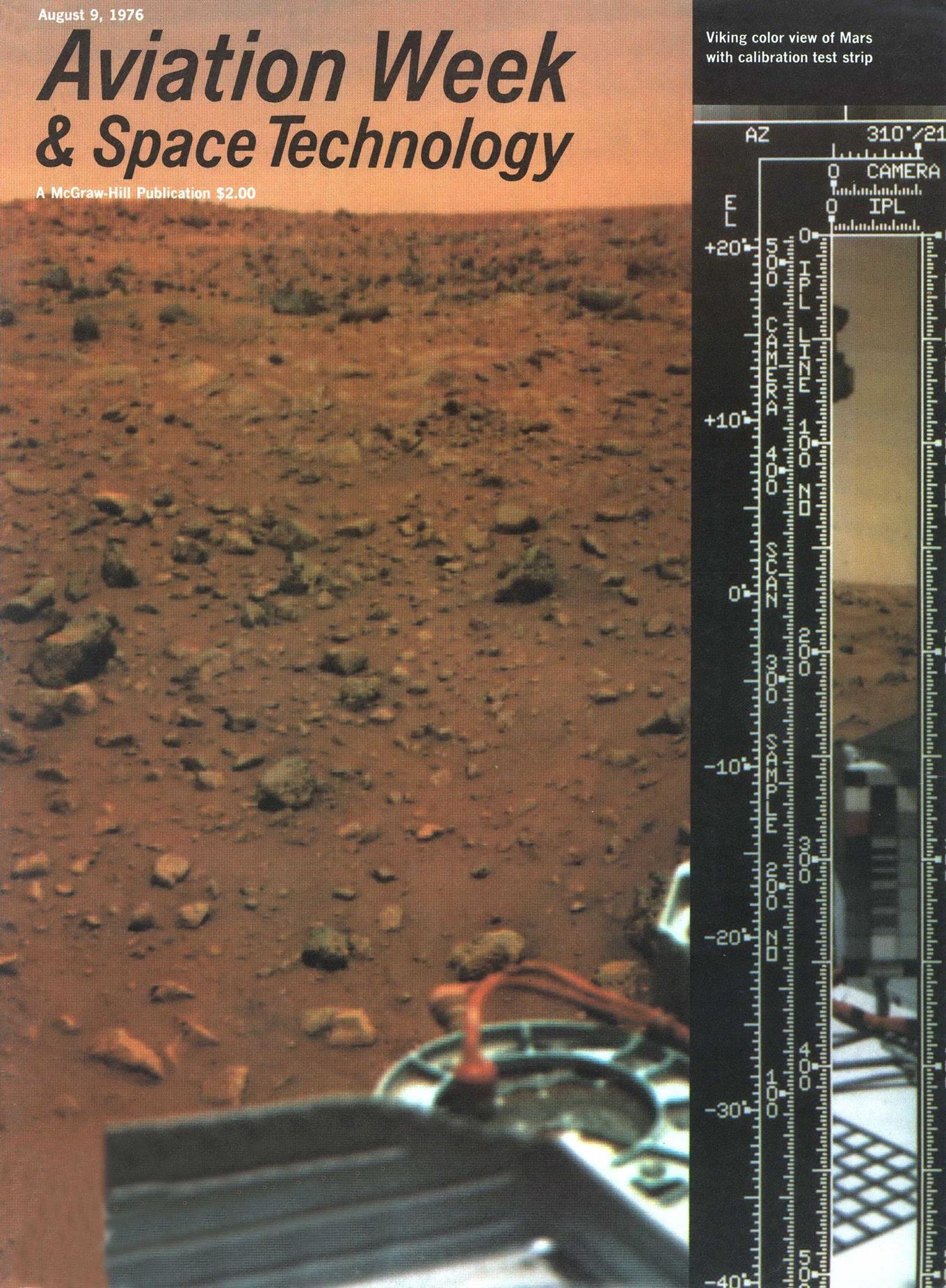 In the Aug. 9, 1976, issue, Donald E. Fink wrote that mechanical problems with the Viking 1 lander have complicated efforts to determine whether early data from two experiments analyzing tiny amounts of Martian soil pointed to biological processes or chemical reactions.

Elsewhere in this issue, we reported that the Jet Propulsion Laboratory was refining details of seven interplanetary mission proposals they hoped would form the basis for a strong unmanned space program into the 1990s. 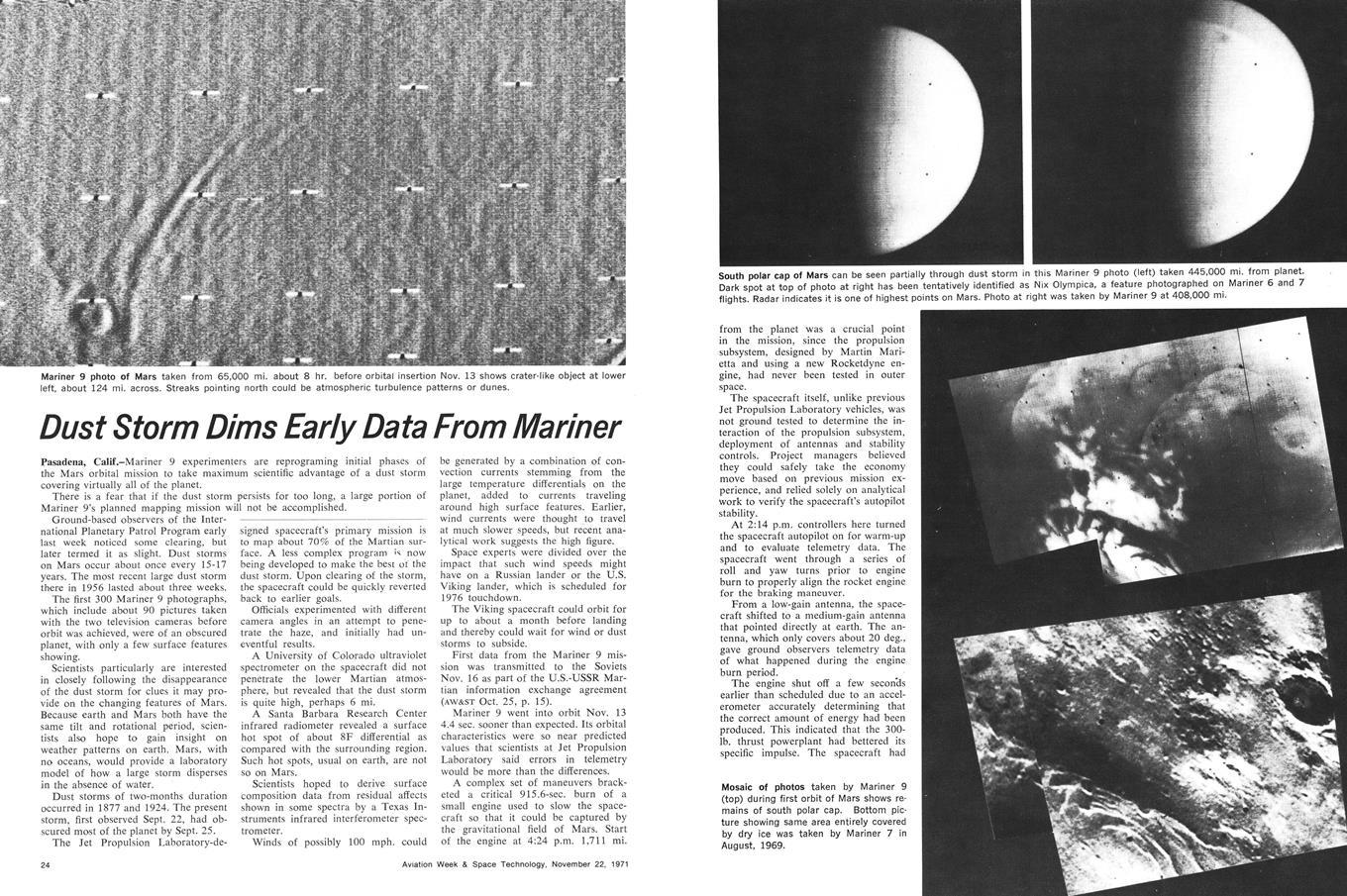 In the Nov. 22, 1971, issue, Mariner 9 controllers were "reprogramming initial the Mars orbital mission to take maximum scientific advantage of a dust storm covering virtually all of the planet. If the dust storm persists for too long, a large portion of Mariner 9's planned mapping mission will not be accomplished." 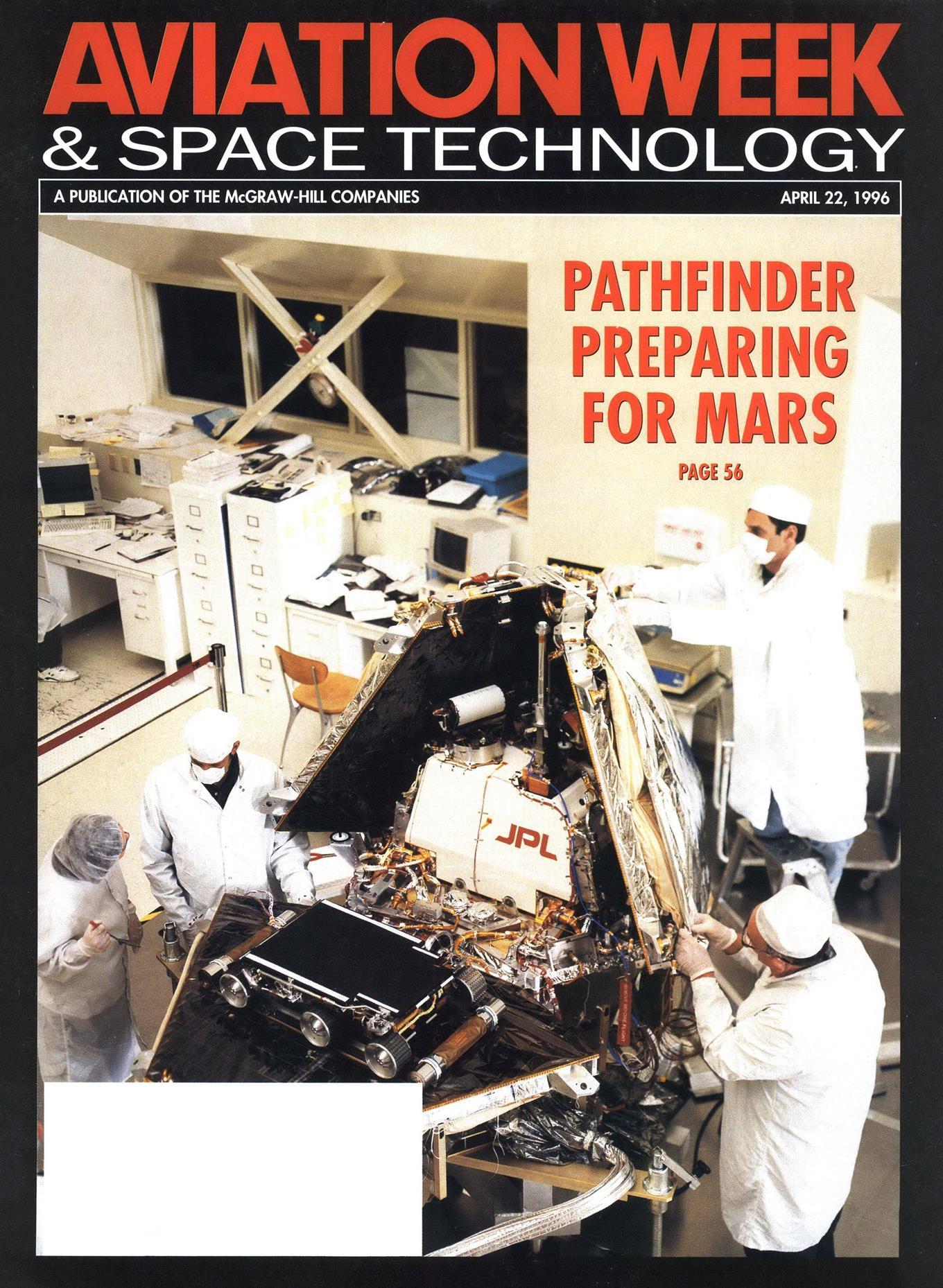 The April 22, 1996, cover image shows the Mars Pathfinder spacecraft being integrated at the Jet Propulsion Laboratory. The rover is attached to one of the the landers "petals" that were to unfold once it was safely on the planet's surface.

Pathfinder, the first Mars lander in 20 years, carried the first rover on any planetary body beyond Earth's Moon. Beyond science, its aim was to pave the way for a new generation of low-cost missions.

Read the article in the issue. 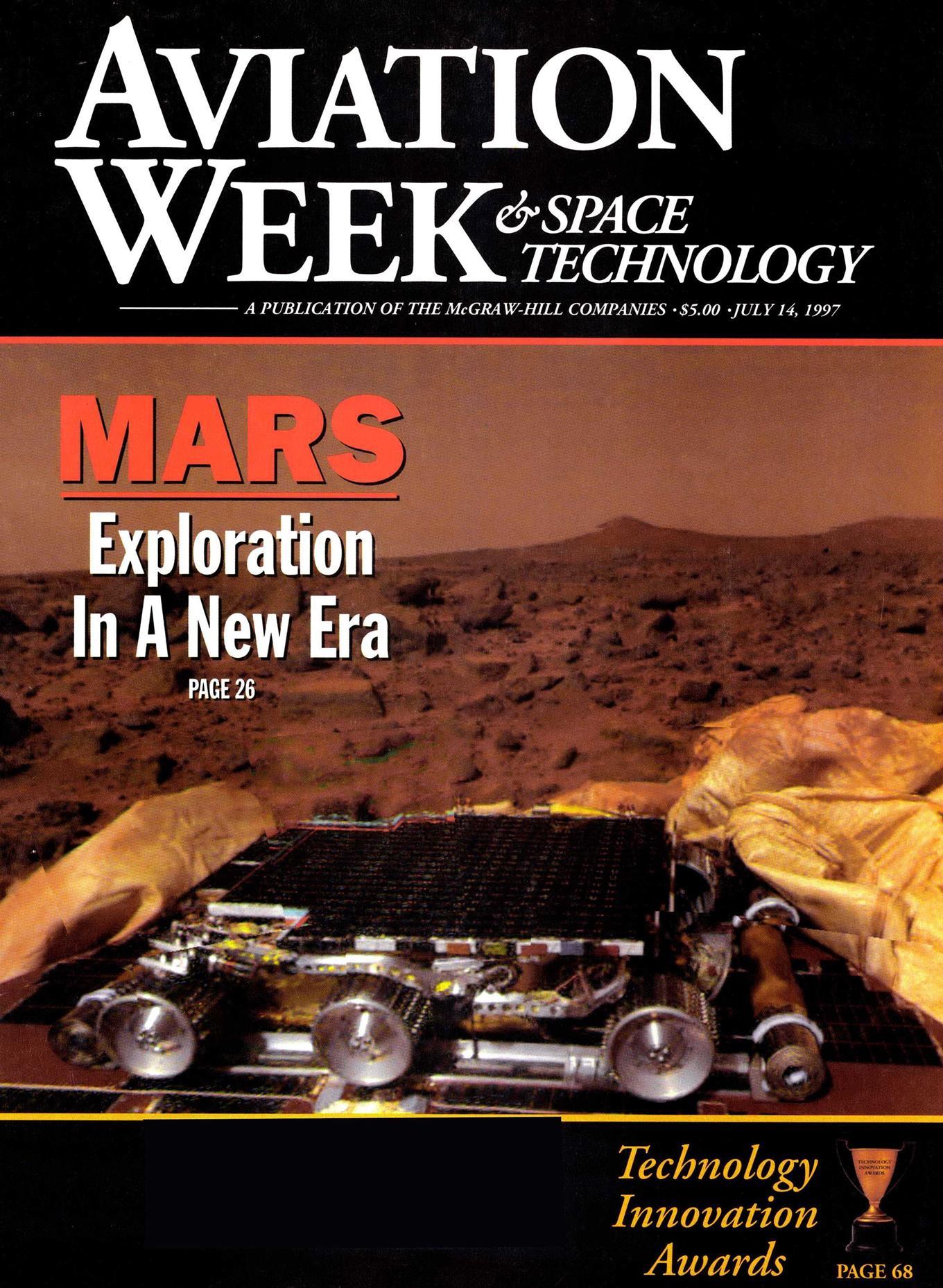 Exploration In A New Era

On the July 14, 1997, cover, Pathfinder's rover, Sojourner, sits on the lander before controllers drove it onto Martian soil in Ares Vallis on July 4.

The issue included a feature package on the mission (pp. 26-36) including a report on scientific findings about Mars's crust. 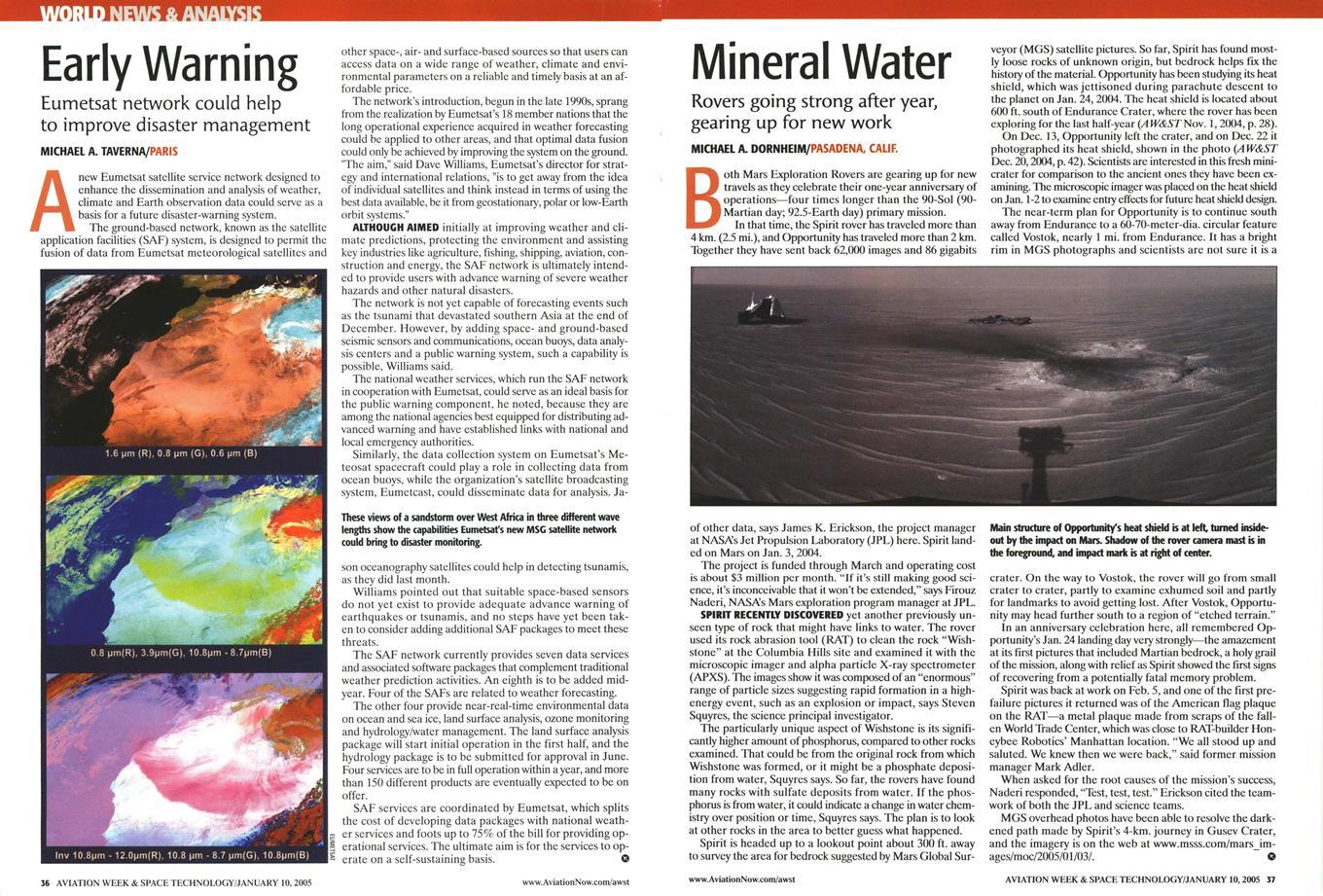 Two Mars' exploration rovers launched to Mars in 2003, Opportunity and Spirit, achieved outstanding scientific results. Both became active on the surface in 2004. Spirit became stuck in 2009 and sent back its last data in 2010. Opportunity is still active in 2016.

"Spirit discovered a previously unseen rock that might have links to water," Aviation Week reported. Read the full article from the Jan. 10, 2005 issue. 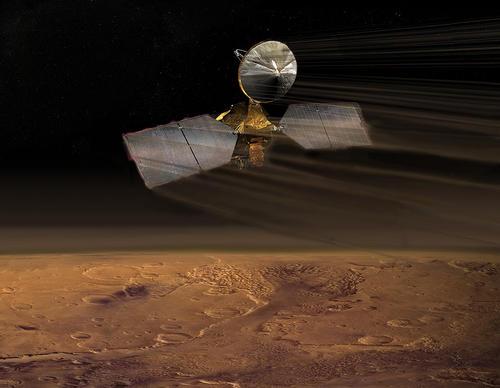 The Mars Reconnaissance Orbiter, built by Lockheed Martin for NASA's Jet Propulsion Laboratory, and was launched in 2002.  Orbital insertion put it into a highly elliptical orbit of the red planet. Between March and November 2006, MRO used aerobraking in the thin Martian atmosphere to enter into a near-polar, low-altitude, circular orbit, saving vastly on fuel that would have been used had the spacecraft's thusters done the work.

NASA explains aerobraking on its site. 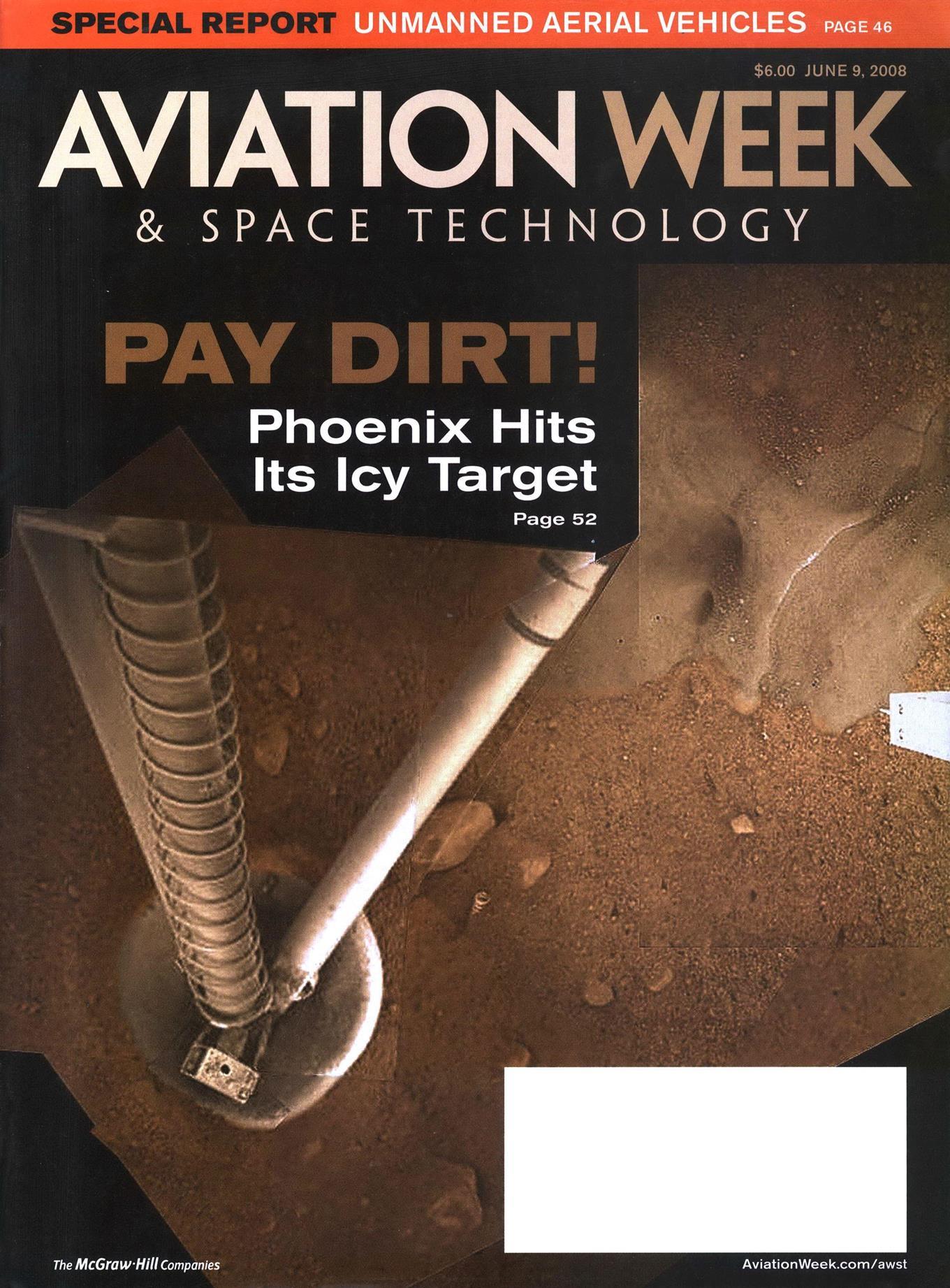 In the June 9, 2008 issue read how Phoenix finds signs of possible habitability, including the occasional presence of liquid water and potentially favorable soil chemistry. 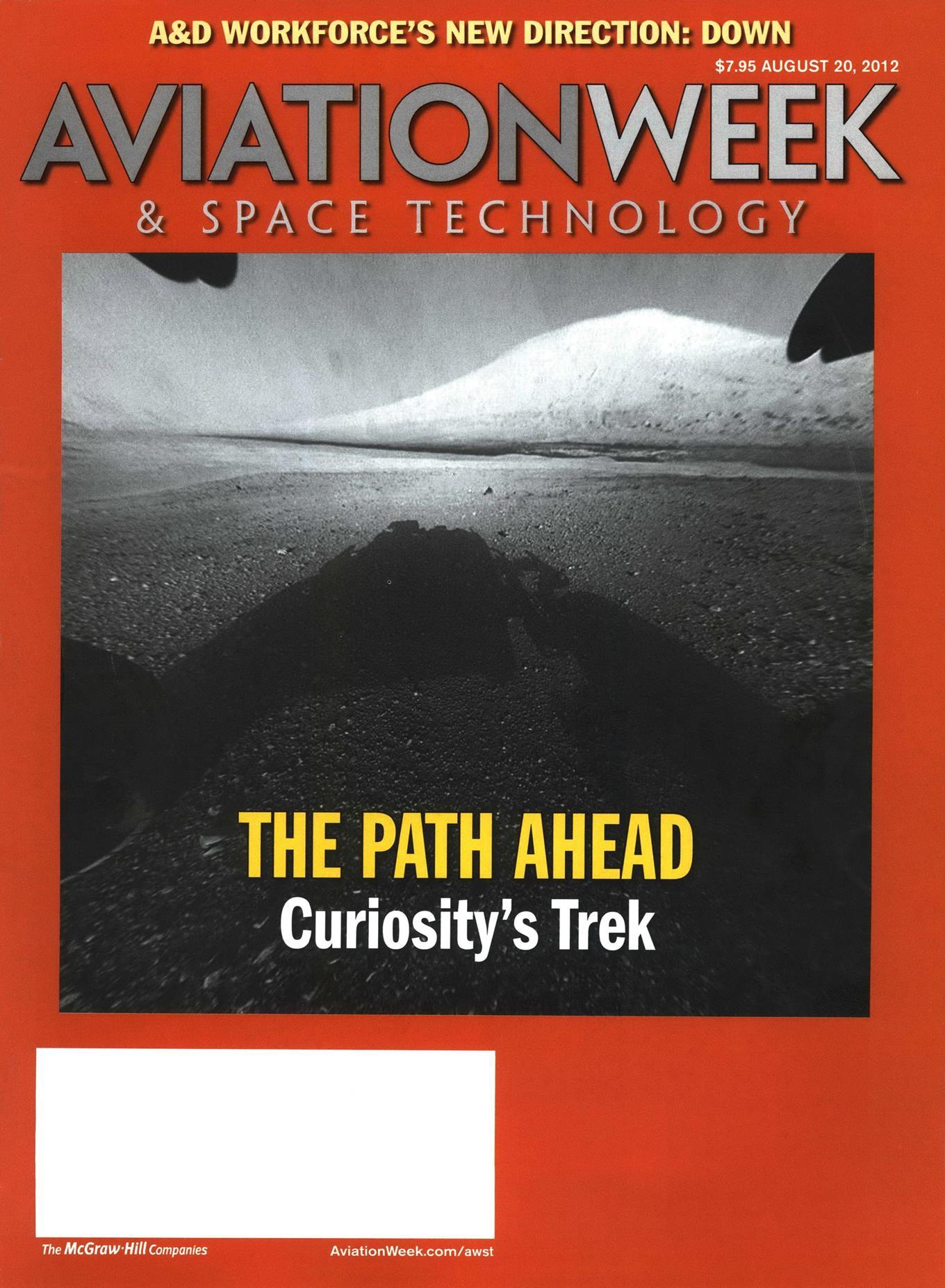 The Path Ahead: Curiosity's Trek

This shadow self portrait was one of the first images NASA's Curiosity rover returned from the surface of Mars after landing.

Sedimentary rock may hold chemical clues to the history of Mars and its habitability.

Read the feature in the August 20, 2012 issue which discusses how Curiosity morphs into a mobile science lab.