Gallery: SmallSats Hitch A Ride To Deep Space On The SLS 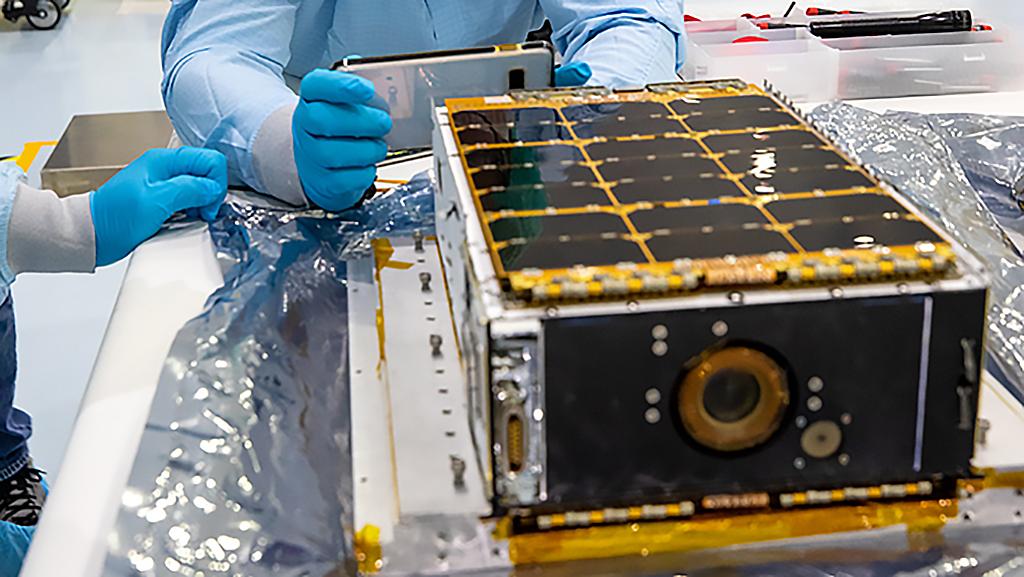 Lunar IceCube will scour the surface of the Moon for water, ice and other potential resources using an infrared spectrometer. Propelled by an electric ion propulsion system, the satellite will take nine months to reach a high-inclination elliptical orbit around the Moon from which it will use the Broadband InfraRed Compact High-resolution Explorer Spectrometer, or Birches, to hunt for volatiles. The mission is expected to last six months.

The Lunar Polar Hydrogen Mapper, or LunaH-Map, will use a neutron spectrometer to determine the amount of water in permanently shadowed craters of the Moon’s poles. The mission follows the still-operational Lunar Reconnaissance Orbiter, which found hydrogen deposits may be more abundant on crater slopes in the southern hemisphere that face the lunar south pole. LunaH-Map’s propulsion is provided by an ion engine that uses iodine, stored as a solid, as a propellant. The spacecraft will use lunar flybys and its ion propulsion system to enter lunar orbit. The mission is scheduled to last at least two months. When the propellant runs out, it will be targeted for a lunar impact. 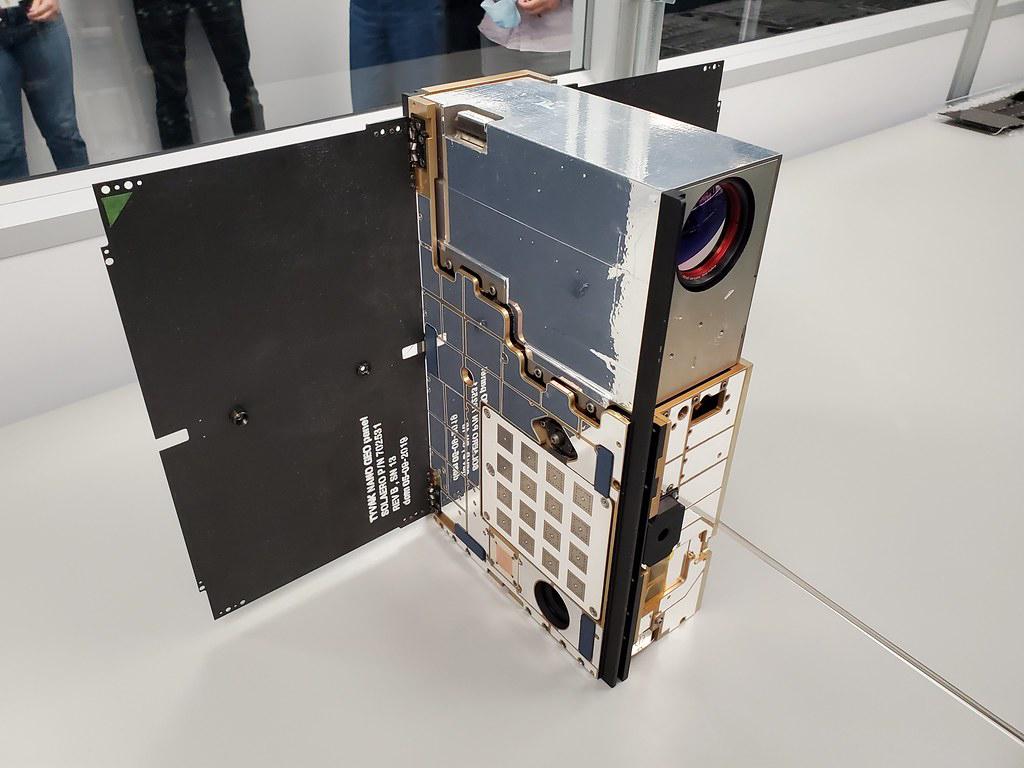 The Lunar InfraRed Imaging cubesat, or LunIR, is a technology demonstration designed to fly by the Moon and continue on for a deep-space technology test to address questions related to transit and long-duration missions. Built by Lockheed Martin, LunIR is equipped with one infrared imager that uses a novel miniature cryocooler to maintain operational temperature. The cubesat is intended to test systems for remote sensing, surface characterization and landing site selection, with the aim of reducing risk for future crewed landings on the Moon and Mars. 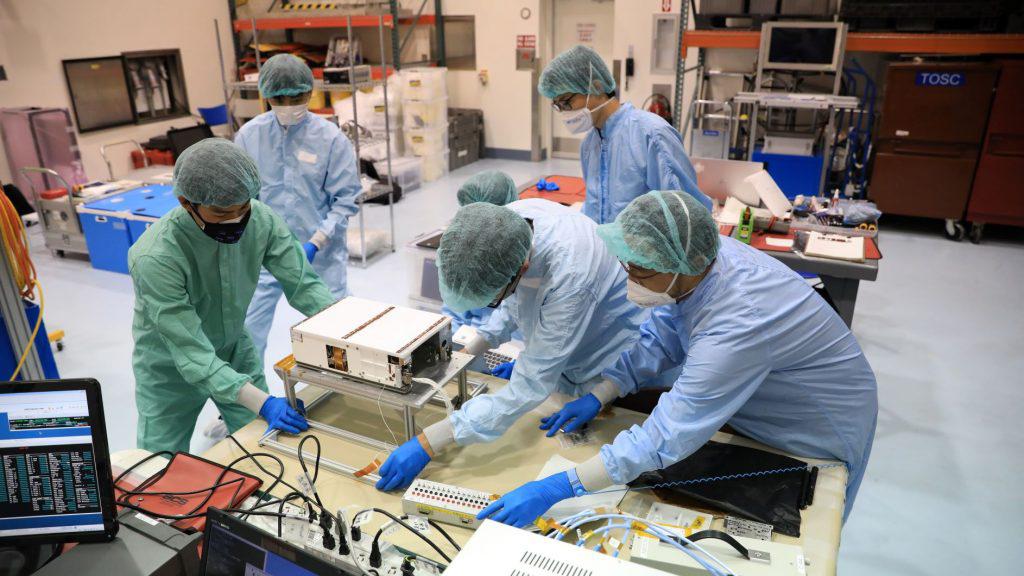 The Omotenashi spacecraft, sponsored by the Japan Aerospace Exploration Agency and the University of Tokyo, is designed to test technologies and trajectory maneuvers for a tiny spacecraft to survive a semihard landing on the Moon using an inflatable airbag and a shock-absorption system made of crushable material and an epoxy filling. Omotenashi also will measure the radiation environment beyond low Earth orbit. If it survives landing, the spacecraft will have a mission of 4-5 days. 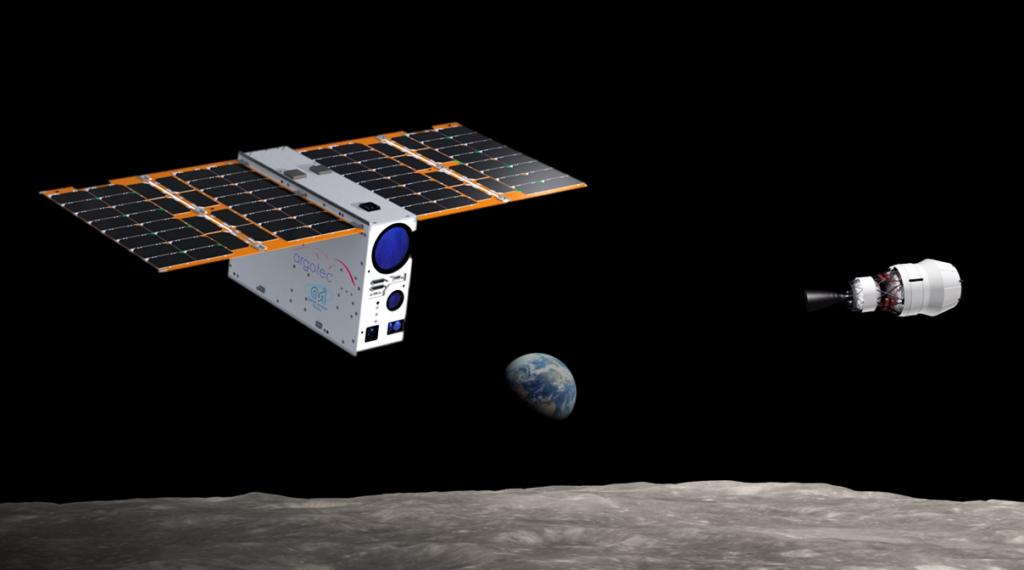 ArgoMoon will attempt to demonstrate close proximity maneuvers in deep space using autonomous navigation software. If successful, the cubesat, which is built by the Italian Space Agency, could return pictures of the SLS interim cryogenic propulsion stage after it separates from the Orion spacecraft, as well as pictures of Earth and the Moon. The spacecraft also will demonstrate long-distance optical communication. To provide attitude control and orbital maneuvering with a minimal amount of power, ArgoMoon uses a hybrid micropropulsion system that combines cold gas and green mono-propellant propulsion in a single system. 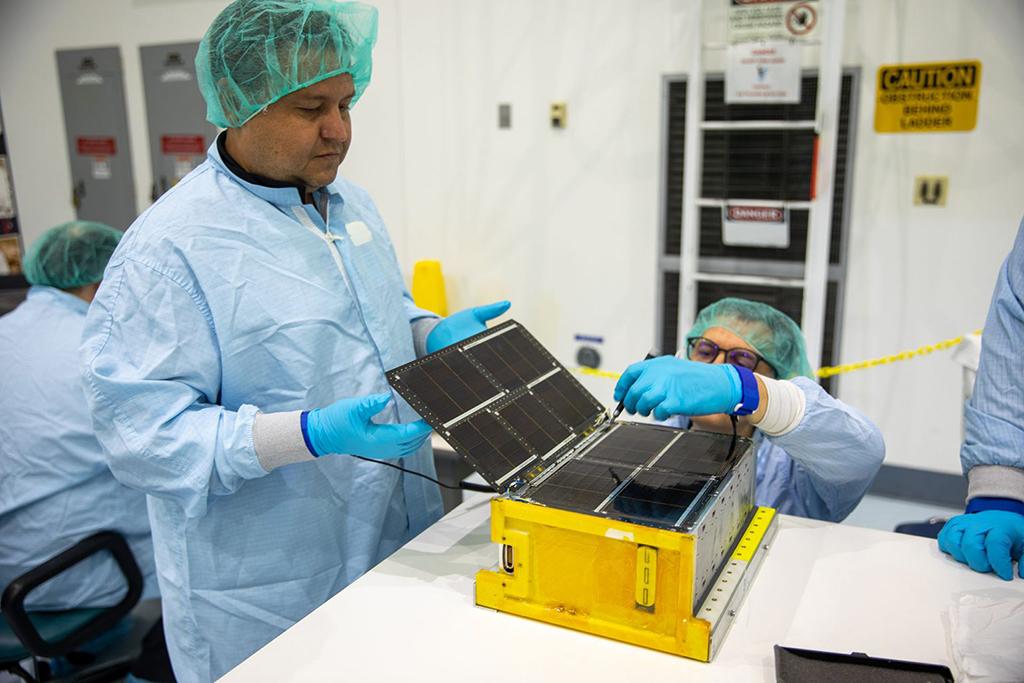 The Team Miles CubeSat, created by Miles Space in collaboration with software company Fluid & Reason, will attempt to demonstrate a low-frequency electromagnetic wave propulsion system. NASA’s Space Technology Mission Directorate funded the project under the Cube Quest Challenge. The spacecraft will attempt fully autonomous travel to a distance of nearly 60 million mi. from Earth and use a software-defined radio to communicate with Earth. 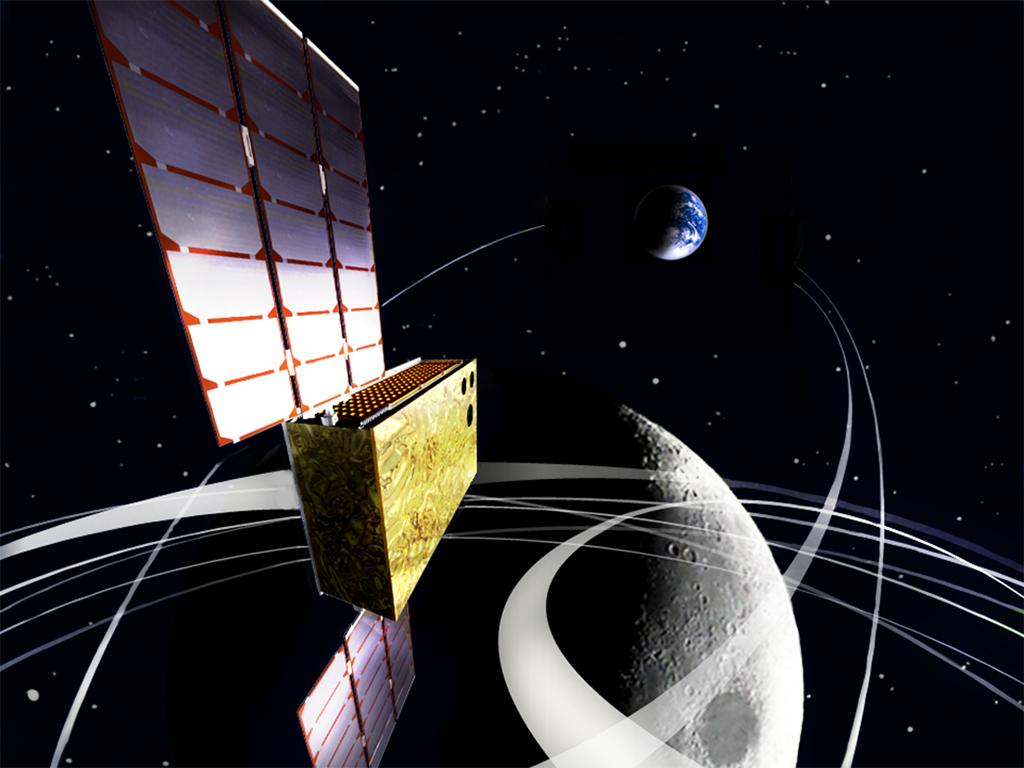 Equuleus is designed to measure the distribution of plasma that surrounds the Earth. It will also demonstrate low-energy trajectory control techniques—such as multiple lunar flybys—within the Earth-Moon region. Developed by JAXA and the University of Tokyo, the cubesat is outfitted with a warm-gas propulsion system that uses water as the propellant. After it is deployed, the cubesat is expected to begin a lunar flyby sequence that will last 1-3 months, followed by five months of maneuvers that take advantage of Earth-Sun-Moon dynamics and possibly end up in orbit at the Earth-Moon L2 LaGrange point using a minimal amount of propellant. If successful, Equuleus will make observations of the plasmasphere, a portion of the atmosphere that rotates with the planet and contains electrons and highly charged particles. 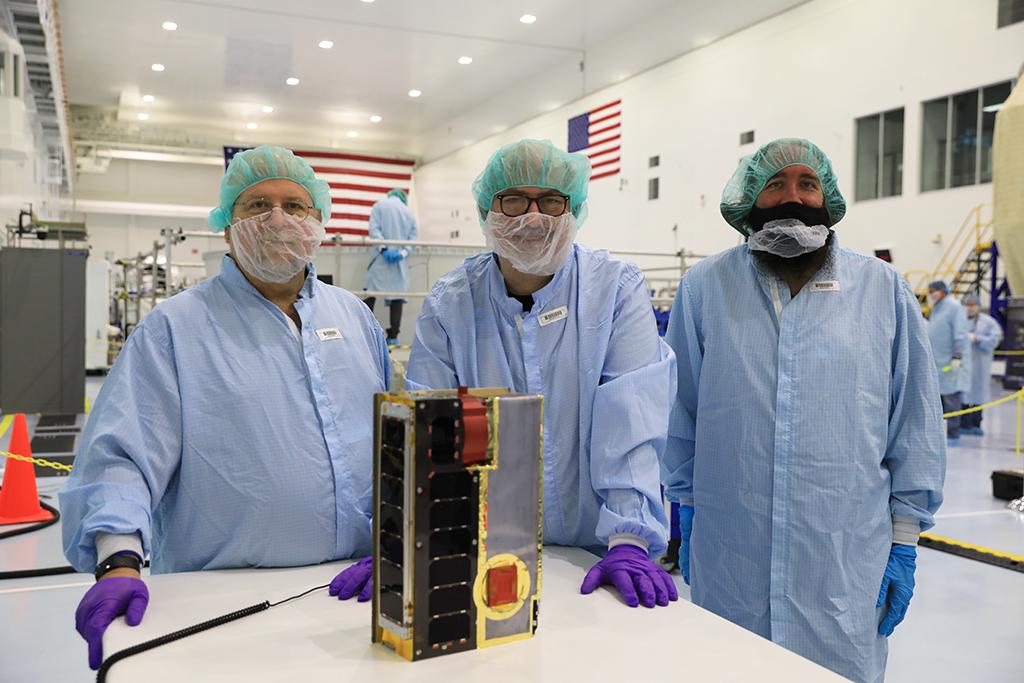 The Cubesat for Solar Particles, or CuSP, is designed to study particles and magnetic fields that stream from the Sun. Once deployed, CuSP will orbit around the Sun and measure incoming radiation that can create a wide variety of effects on Earth. The spacecraft carries three science instruments: the Suprathermal Ion Spectrograph, or SIS, built by the Southwest Research Institute to detect and characterize low-energy solar energetic particles; NASA Goddard’s Miniaturized Electron and Proton Telescope, to detect high-energy solar energetic particles; and the Vector Helium Magnetometer, built by NASA’s Jet Propulsion Laboratory, to measure the strength and direction of magnetic fields. 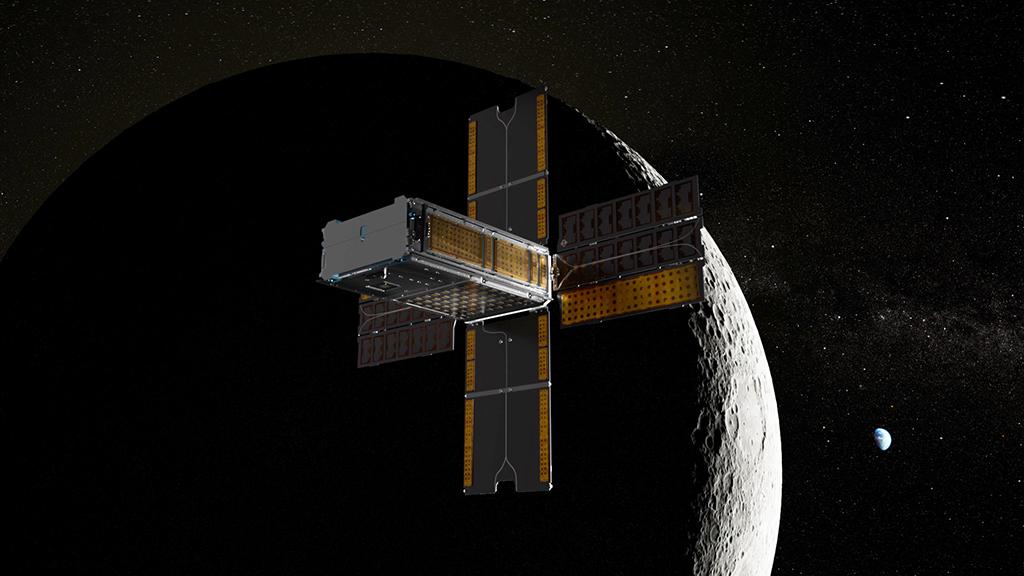 BioSentinel will be one of the first investigations into the biological effects of space radiation outside of low Earth orbit in more than 50 years. The mission will assess how cosmic and solar radiation affect single-cell yeast, which shares numerous basic processes with human cells, including DNA damage and repair. 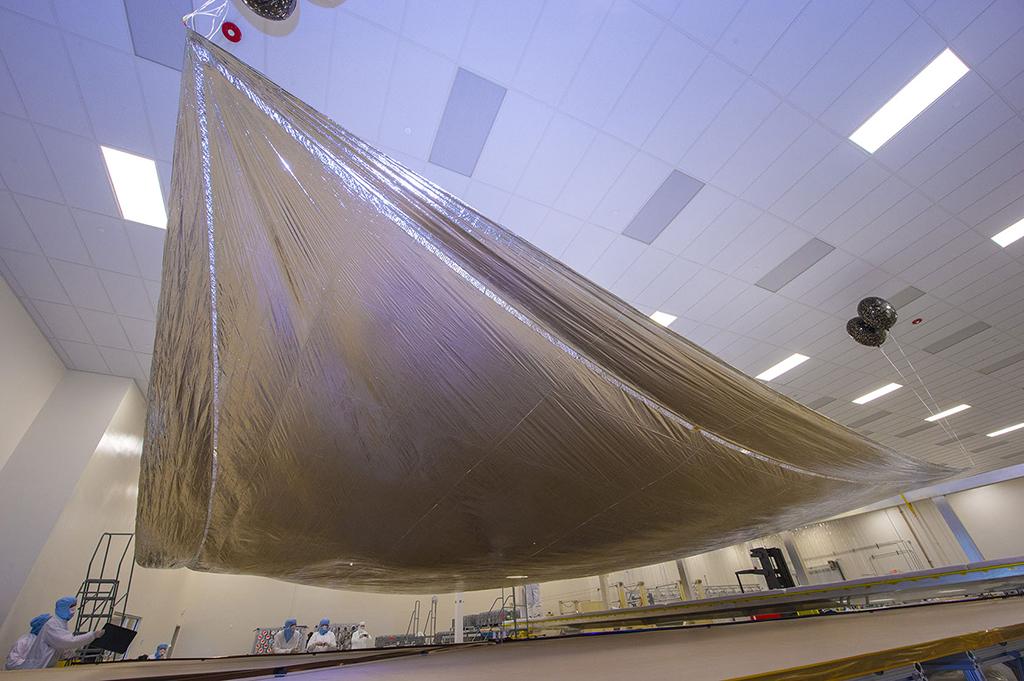 Using a 6U-cubesat bus and solar sail propulsion, the Near-Earth Asteroid Scout, or NEA Scout, will investigate Asteroid 2020 GE, a small, near-Earth asteroid less than 60 ft. in diameter that circles the Sun once every 369 days. The satellite’s primary propulsion system is a solar sail, a thin aluminized sheet that will unfurl to 925 square feet. NEA Scout will use the sail and flybys of the Moon to spiral out of the Earth-Moon system. Propelled by the steady pressure of sunlight on the sail, the journey will take about two years. NEA Scout will then take pictures of the asteroid to help determine its shape, size, rotational properties, debris/dust field and other characteristics.

NASA plans to use the superheavy-lift Space Launch System (SLS) to send astronauts to the Moon, build an outpost in lunar orbit and fly other missions in deep space. But the booster—the most powerful to reach the launchpad since the Saturn V—also opens the door for deep-space exploration with cubesats.

Ten 6U cubesats, each about the size of a shoebox, will ride aboard the SLS, which is targeted to launch on Aug. 29. They are mounted on brackets inside the ring that connects the SLS upper stage with the Orion deep-space capsule and will be deployed after the Orion spacecraft separates. The tagalongs include three lunar orbiters, a lunar lander, three radiation probes, an asteroid scout and technology demonstrations.