On the 60th anniversary of the U-2 shootdown flown by Francis Gary Powers over Sverdlovsk, USSR, we look back at seven artifacts surrounding the incident.

Around 10 am on May 1, 1960, CIA pilot Francis Gary Powers was 70,000 feet in the cockpit of a Lockheed U-2C over the Soviet industrial city of Sverdlosk. He was about halfway through an aerial spying mission over several of the USSR’s most sensitive cities, starting with the ICBM base at Tuyratam on the southern border. In the pre-Communist era, Sverdlosk, then (and now)- named Yekaterinburg, was the setting for the assassination of Tsar Nicholas II, but in 1960 it had become one of the Soviet Union’s major industrial cities. The CIA had been operating U-2Cs over the USSR for four years, but Powers’ flight was the first to fly over the factories of Sverdlosk.

From his lofty perch, Powers’ had no idea of the blood-lust of the Soviet air defense forces arrayed below him. An SA-2 surface-to-air missile battery near Sverdlosk finally locked onto Powers aircraft. The salvo inadvertently shot down a MiG-19 fighter pursuing Powers, but another missile blew off a chunk of Powers’ horizontal stabilizer, a fatal blow for a U-2C at that altitude. In a declassified CIA debriefing with Lockheed’s U-2 designer, Clarence “Kelly” Johnson, upon Powers’ release from Soviet prison in 1962, the pilot explained exactly what happened the moment he lost control of his spy plane. 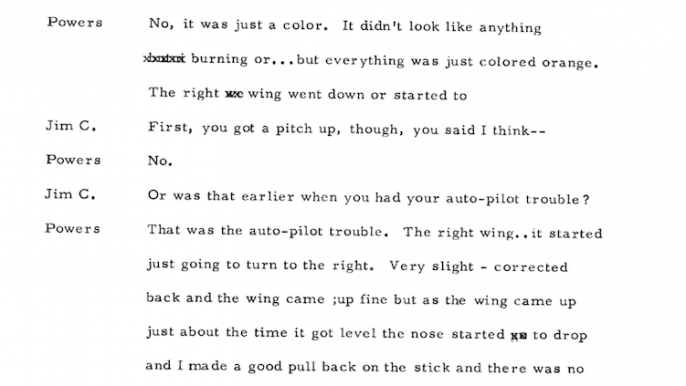 The initial reaction to the capture of an American pilot shot down deep inside Soviet territory was confusion. As USSR Premier Nikita Khrushchev called for action against the US by the United Nations Security Council, the US government released a detailed cover story, which Aviation Week duly reported. The US government’s blatant lies would soon be exposed by another Khrushchev press conference, where he laid out the spying equipment captured inside the wreckage of the U-2.

3. In Burbank, California, Johnson’s staff at Lockheed’s Skunk Works knew better about the real mission of the U-2C, but struggled to believe that Soviet air defense technology was capable of shooting down an aircraft at 70,000 feet. Mostly, the reaction was embarrassment. The CIA had assured President Eisenhower that the risk of losing a U-2 due to Soviet air defenses was low. Johnson’s U-2 project logbook captured the tone of the political aftermath. 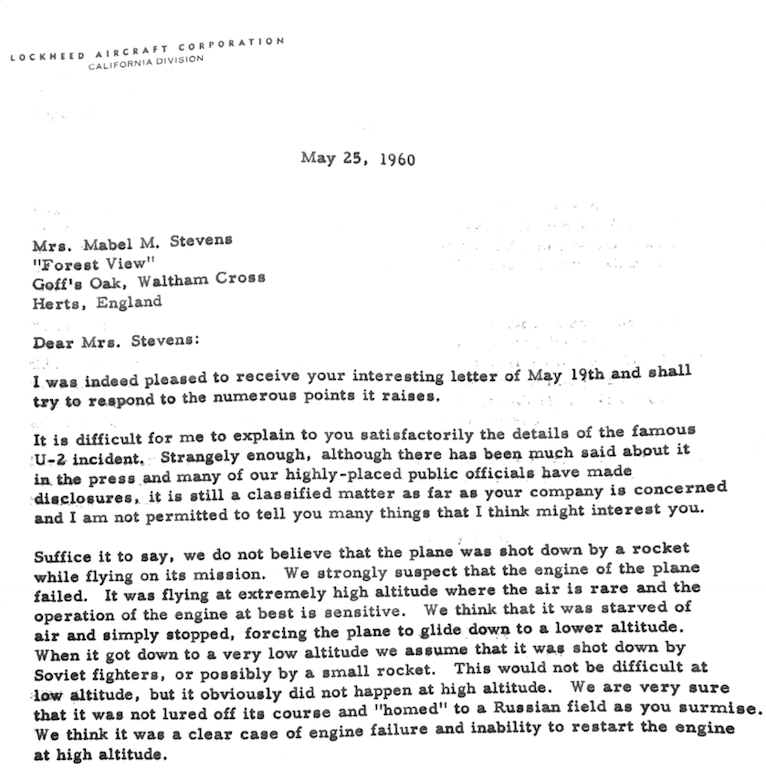 5. High altitude escape from the plummeting U-2

When a Soviet SA-2 surface-to-air missile detonated behind his aircraft at 70,500 ft. above Sverdlovsk, Powers was unable to use the ejection seat because centrifugal forces pinned him against the canopy. Instead, he released the canopy and prepared to arm a destruction device before bailing out. Hurtling down through 34,000 ft. he released his seatbelt prior to setting the explosives but was immediately thrown half out of the cockpit and found himself dangling by his oxygen hose. Unable to reach the destruction switches, the hose broke and Powers was thrown clear of the doomed aircraft. Powers fell until his parachute automatically opened at 15,000 ft. The U-2 pilot’s handbook, de-classified by the CIA and released in 2012, recommends that “a very high altitude bailout should be avoided except in an extreme emergency.” Cockpit fire or “uncontrollable maneuvers” are suggested as likely reasons for prompting such an escape – the idea of a missile being able to take down the U-2 at such high altitudes then being considered unthinkable.

The CIA U-2 flight handbook gives an overview of the ‘Destructor’ – the explosive device which Power’s was supposed to arm before escaping from the aircraft. Although the book asserts the 2.5 lb. of high explosive was designed for “emergency destruction of the airplane” another CIA report which was declassified for release in 2013 adds more detail to the circumstances of the Power’s incident. It states that “even if Powers had been able to activate the destruction device, however, it would not have destroyed the aircraft. The small explosive charge was only designed to wreck the camera.”

For almost three years prior to the downing of Power’s U-2 with a missile the Soviet Union attempted to interdict the spy plane with fighter aircraft. Interception techniques using MiG-19 and MiG-21 fighters were developed in which pilots, guided by radar operators, would attempt to coax their aircraft to within missile or gun range by performing a power dive followed by a zoom climb. However, the Soviet fighters would inevitably lose control in the thin upper atmosphere and fall back before achieving an intercept. But U-2 pilots often spotted the MiGs and felt their aircraft, originally unpainted in shiny bare metal to save weight, were too visible and vulnerable. As a result aircraft, like this sister U-2 to Power’s 56-6693, also known as Article 360, soon swapped their silver for a blue-black paint scheme.