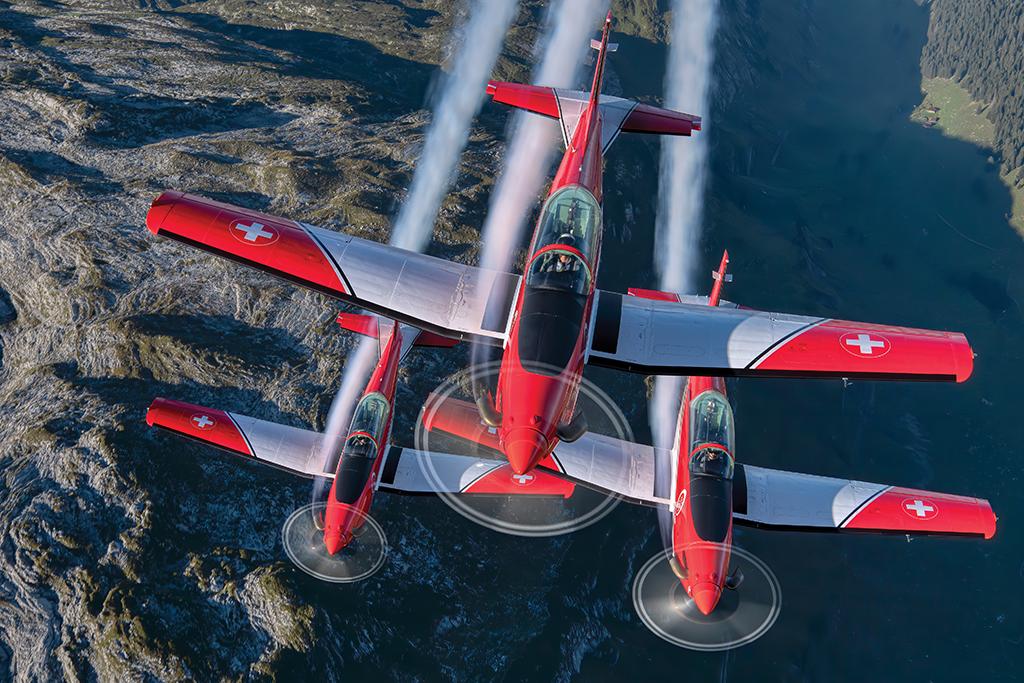 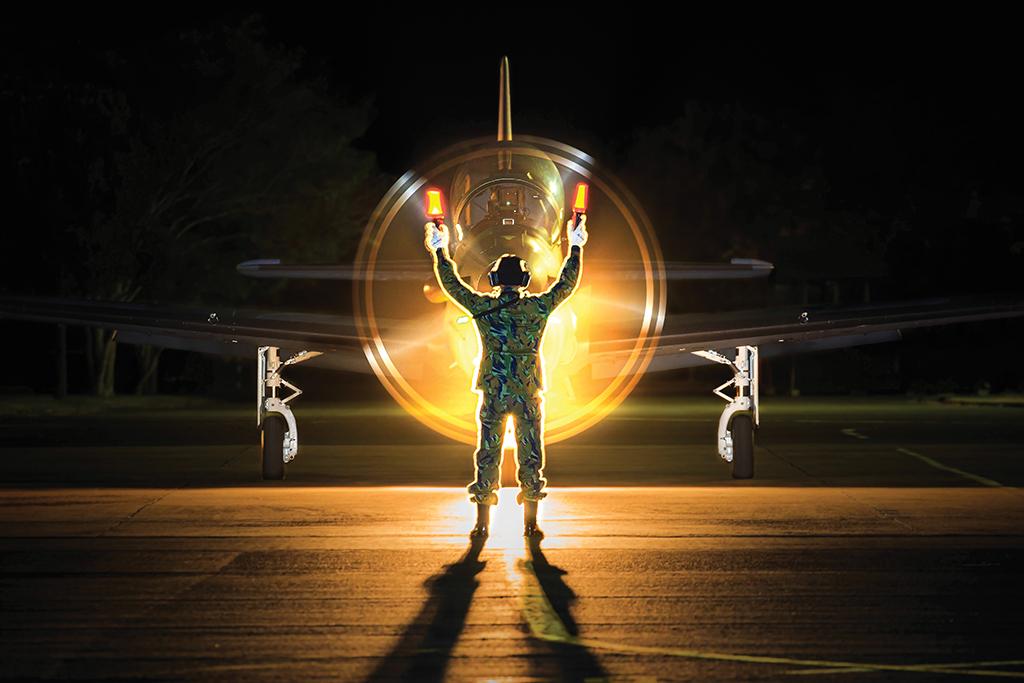 I’d been photographing several aircraft one afternoon at Anapolis Air Base’s yard when I realized that the Embraer Super Tucano’s propeller disk and the mechanic formed a beautiful composition for a picture. I learned there was a flight that night, so I came back when it was dark. The image was already in my mind. So I prepared the camera, checked if I was in the right position and, when the airplane arrived, I clicked. 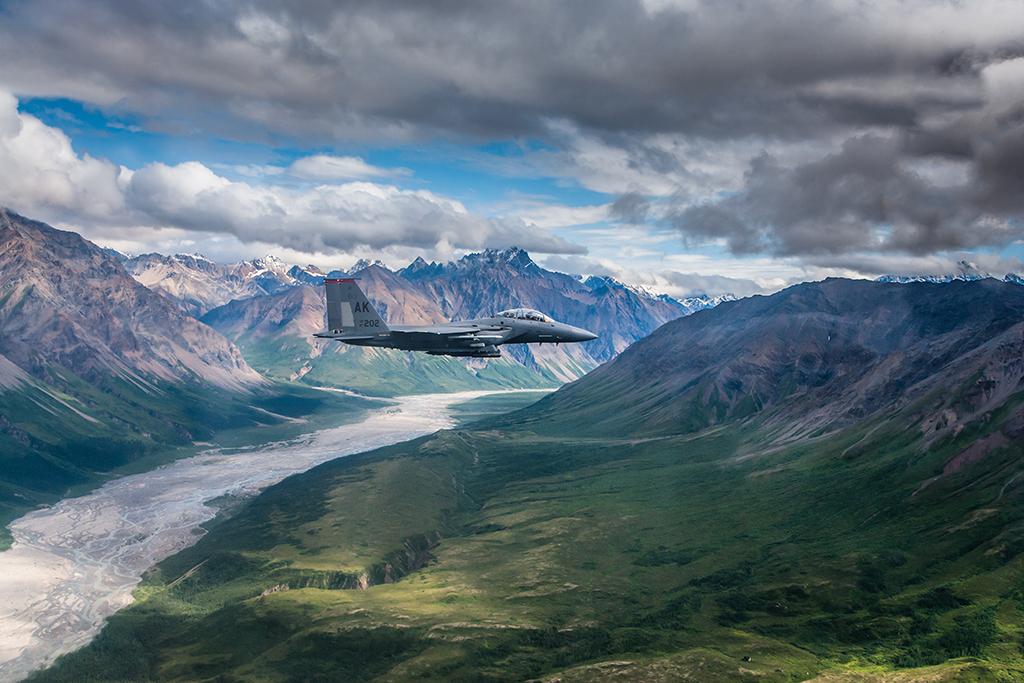 Col. Randy “R2” Roberts flies his 90th Fighter Sqdn. Boeing F-15E Strike Eagle through the Chugach Mountains, near Anchorage, Alaska. I was tootling along in the back seat of another F-15E with Maj. Evan “File” Pettus at the controls. This shot took place just before Roberts retired. He was commanding officer for the 3rd Operations Group out of Elmendorf AFB, Alaska. The Strike Eagles were also about to depart Alaskan skies, with the 90th about to reform with a new cadre of pilots flying F-22A Raptors. 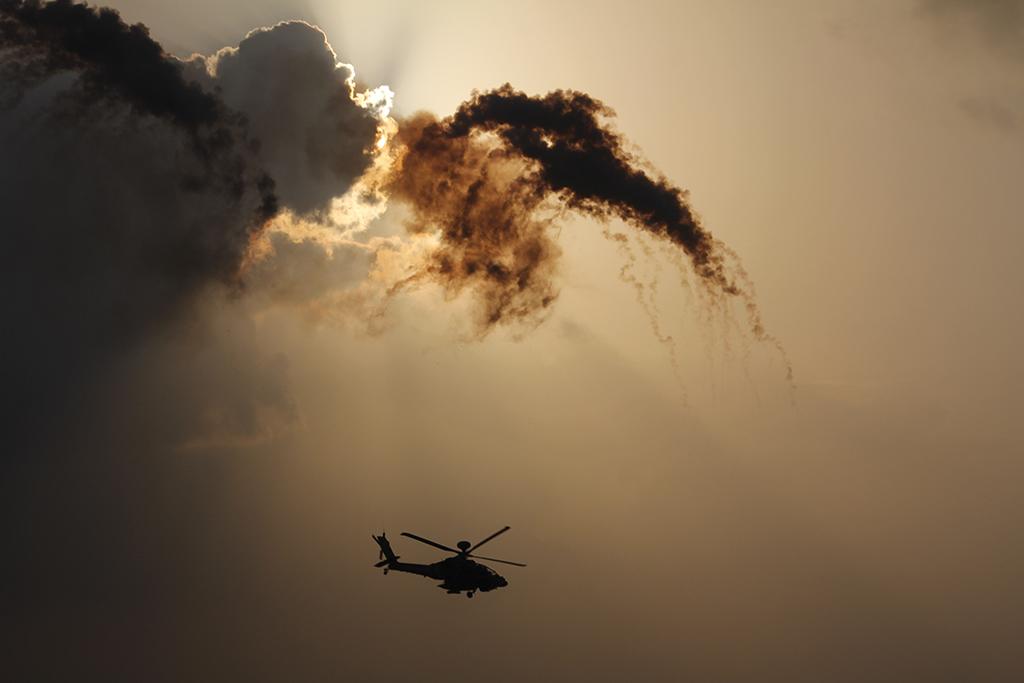 This Boeing AH-64D was shot during the graduation ceremony of Israeli Air Force pilot cadets in December 2012. The helicopter is firing flares and descending to simulate an evasive maneuver for the public. 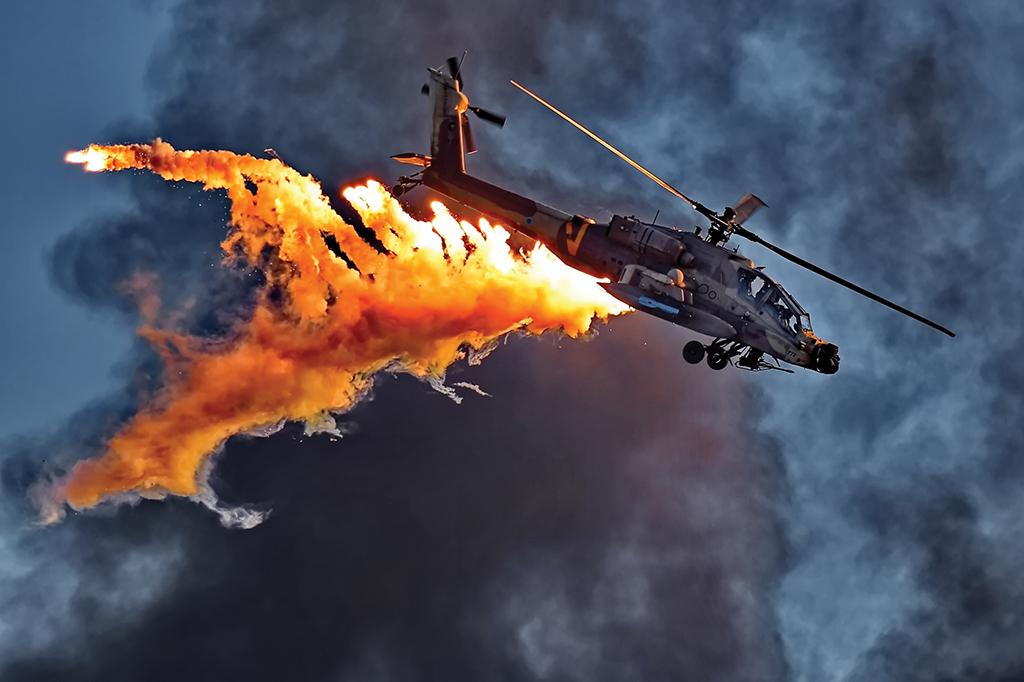 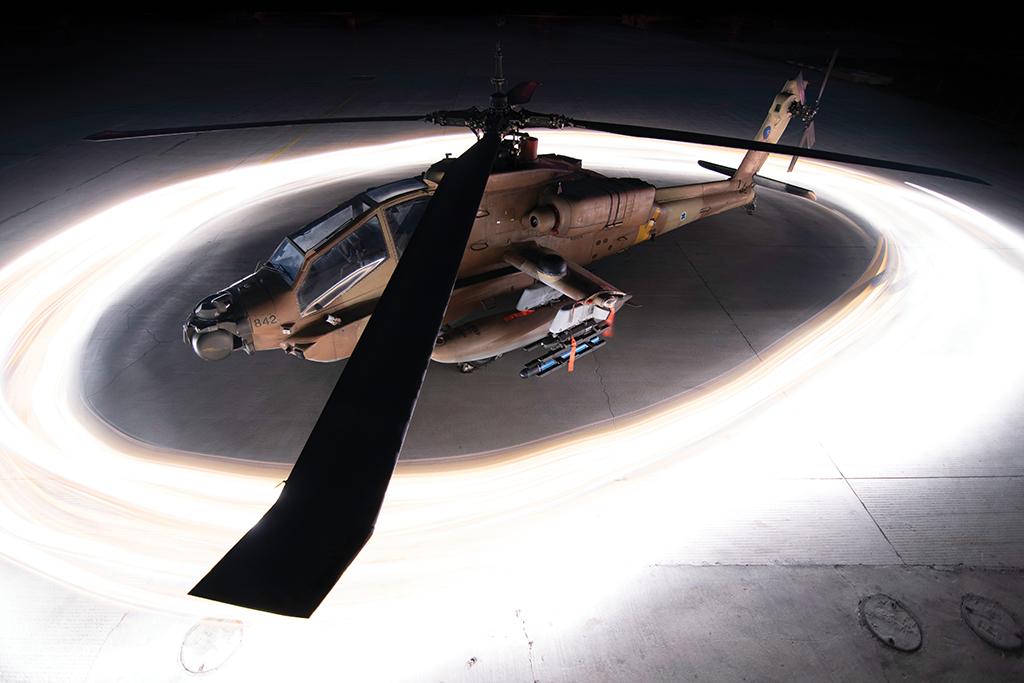 This Israeli Air Force AH-64 Apache “Peten” rests in total darkness at midnight on a desert air base, but suddenly it is circled with a swirling blizzard of lights that creates a blinding ring to shield it. 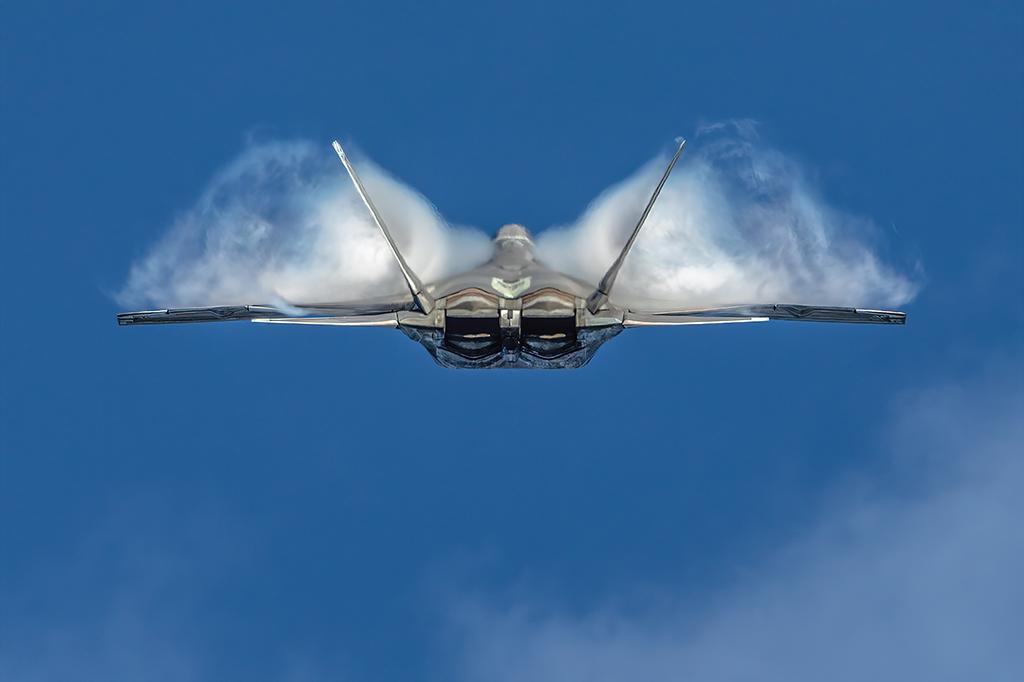 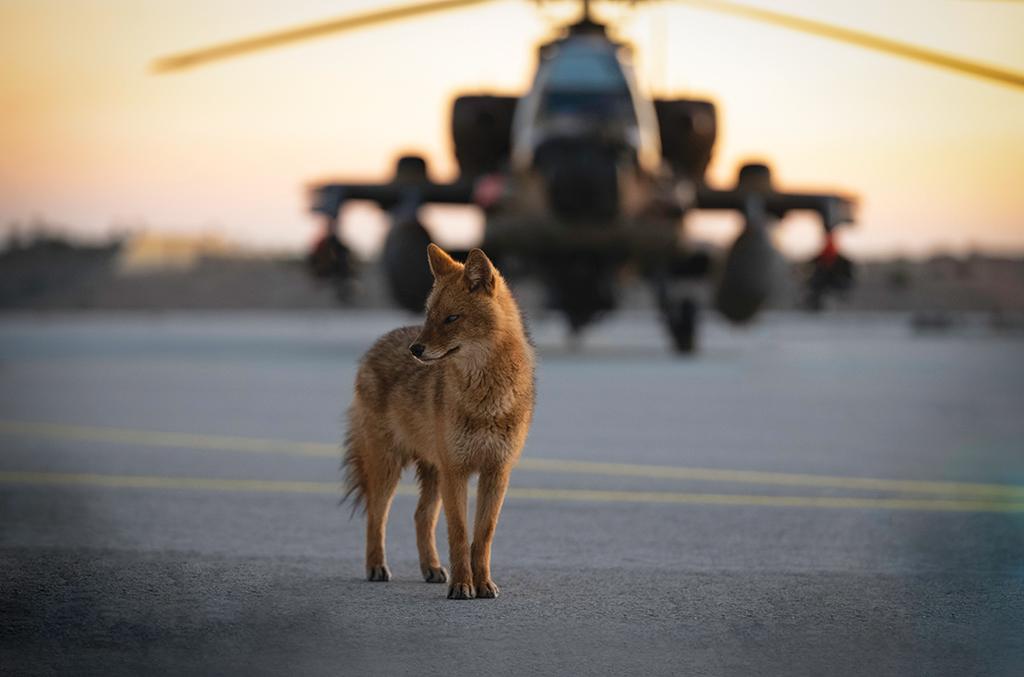 Golden Jackal On The Tarmac

This critter was standing on the tarmac at sunrise in front of an AH-64 Peten helicopter in the Negev Desert. 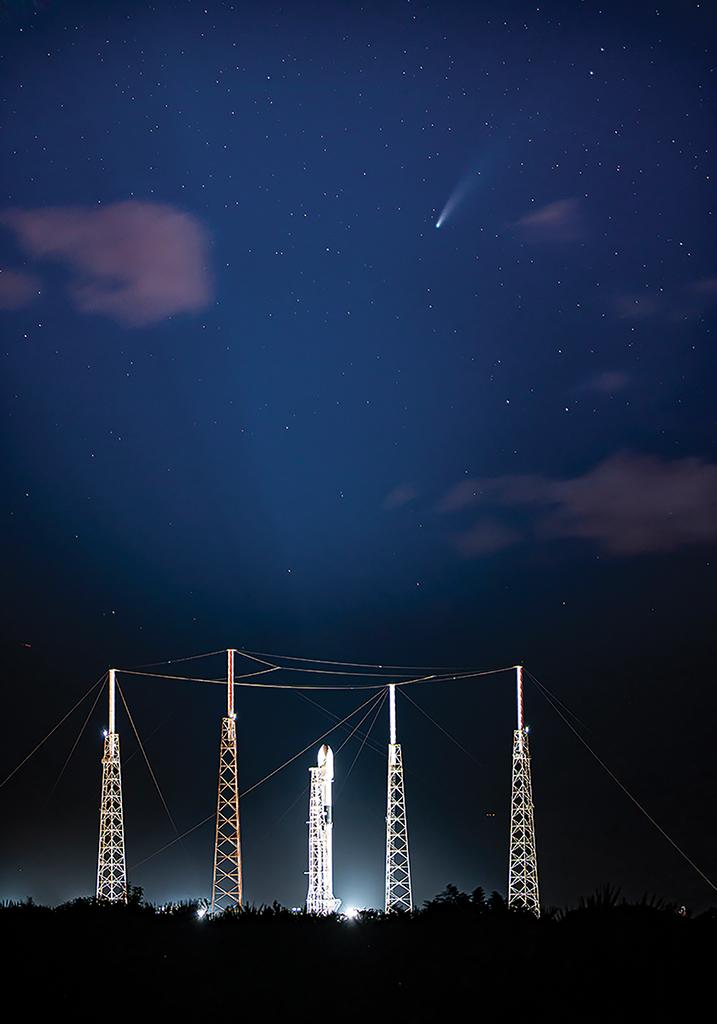 Comet NeoWise passes over a Falcon 9 before launch. Old-fashioned filtering, including the use of a black towel, was used to balance the exposure between the brightly lit launchpad and the sky above. 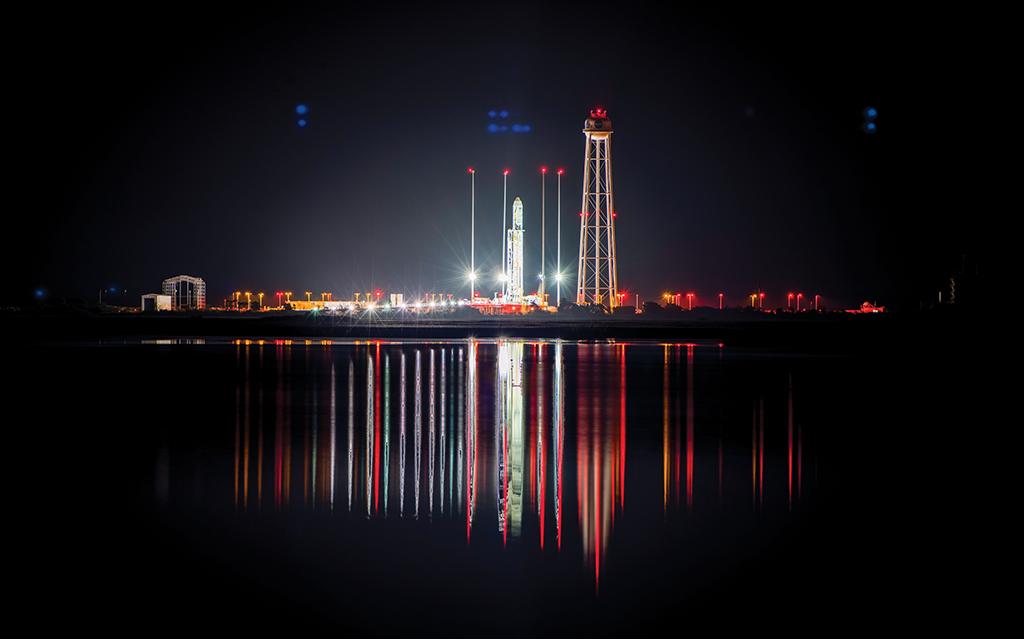 Reflecting across the water at NASA’s Wallops Flight Facility in Virginia, Antares and the launch facility glowed before the launch, creating a “rainbow” of colors in 2017. The source of the blue lights at the top is unclear. 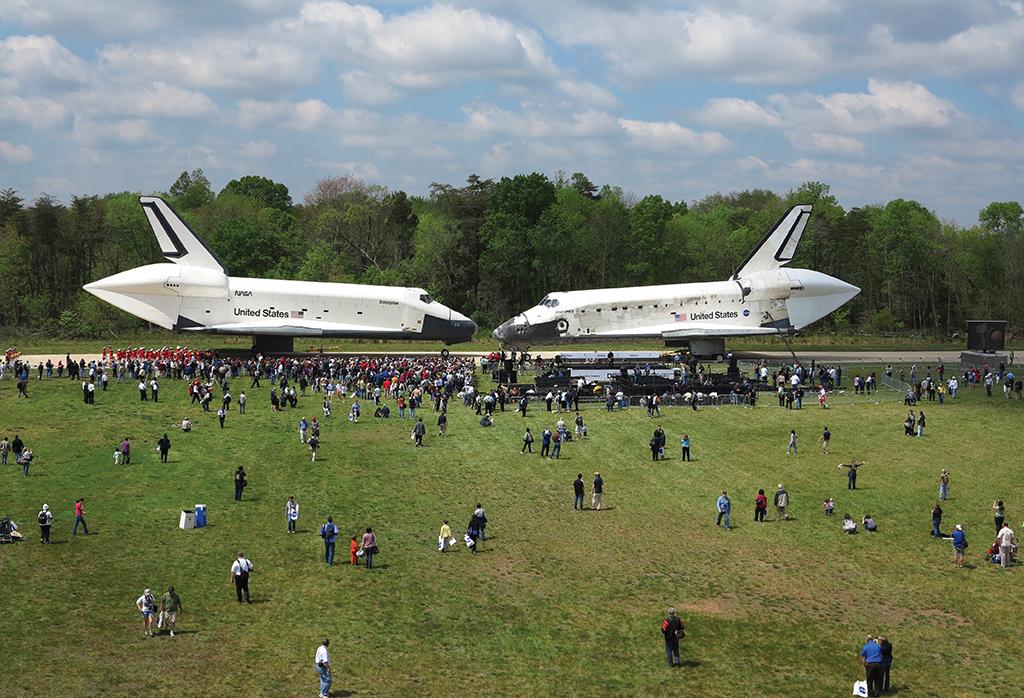 The space shuttles Enterprise and Discovery stood nose to nose before switching places at the National Air and Space Museum’s Udvar-Hazy Center in Chantilly, Virginia, in 2012. 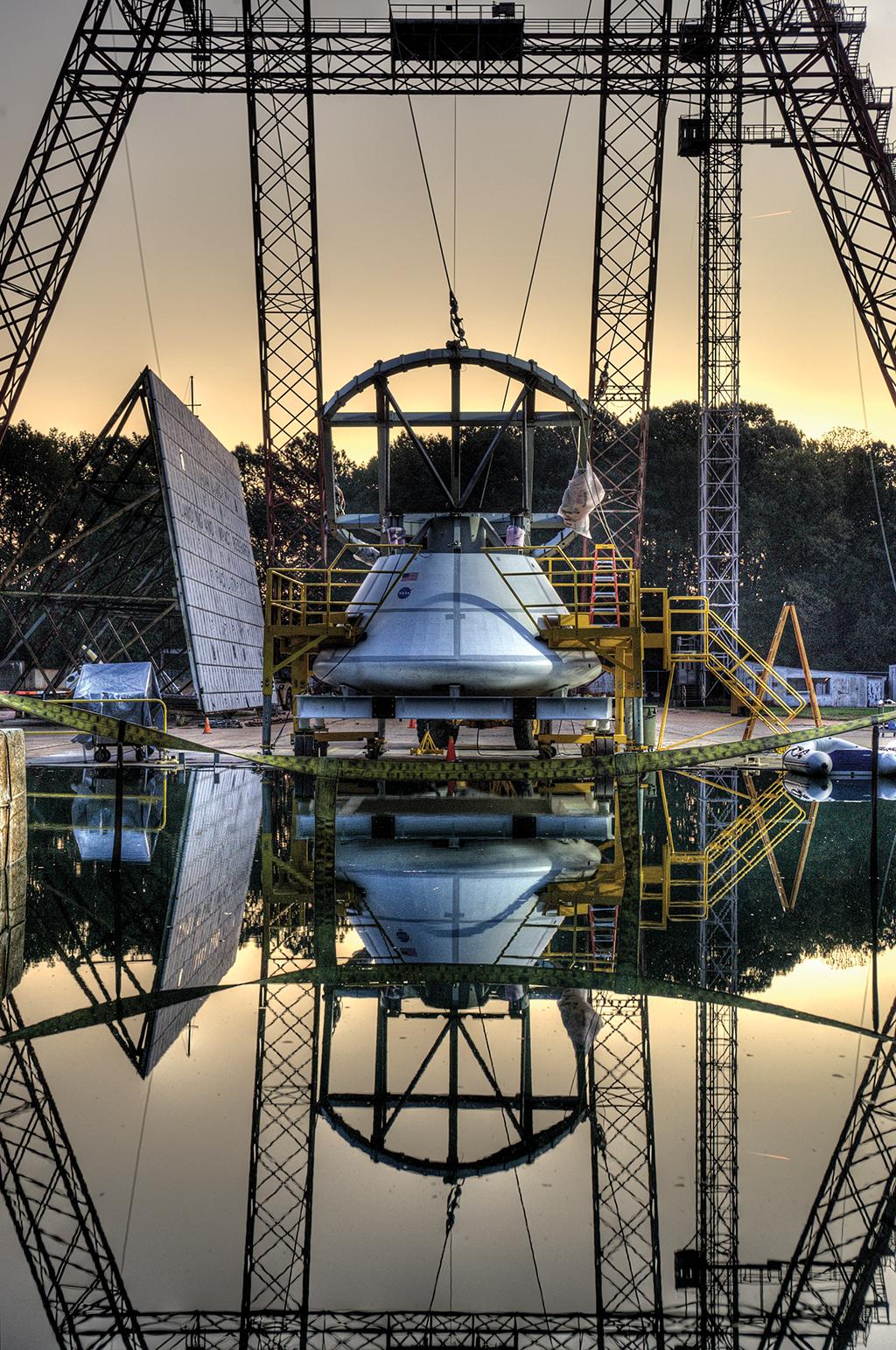 The Orion test article capsule at NASA Langley Research Center’s Hydro Impact Basin, part of the Landing and Impact Research (LandIR) Facility in Hampton, Virginia, awaits a water impact test scheduled for later that day. A national historical landmark, the LandIR vehicle structural testing complex—better known as the “gantry”—was built in 1963 to train astronauts to land on the Moon. The tests at Langley are preparing the way for proposed future astronaut missions to the Moon and Mars. 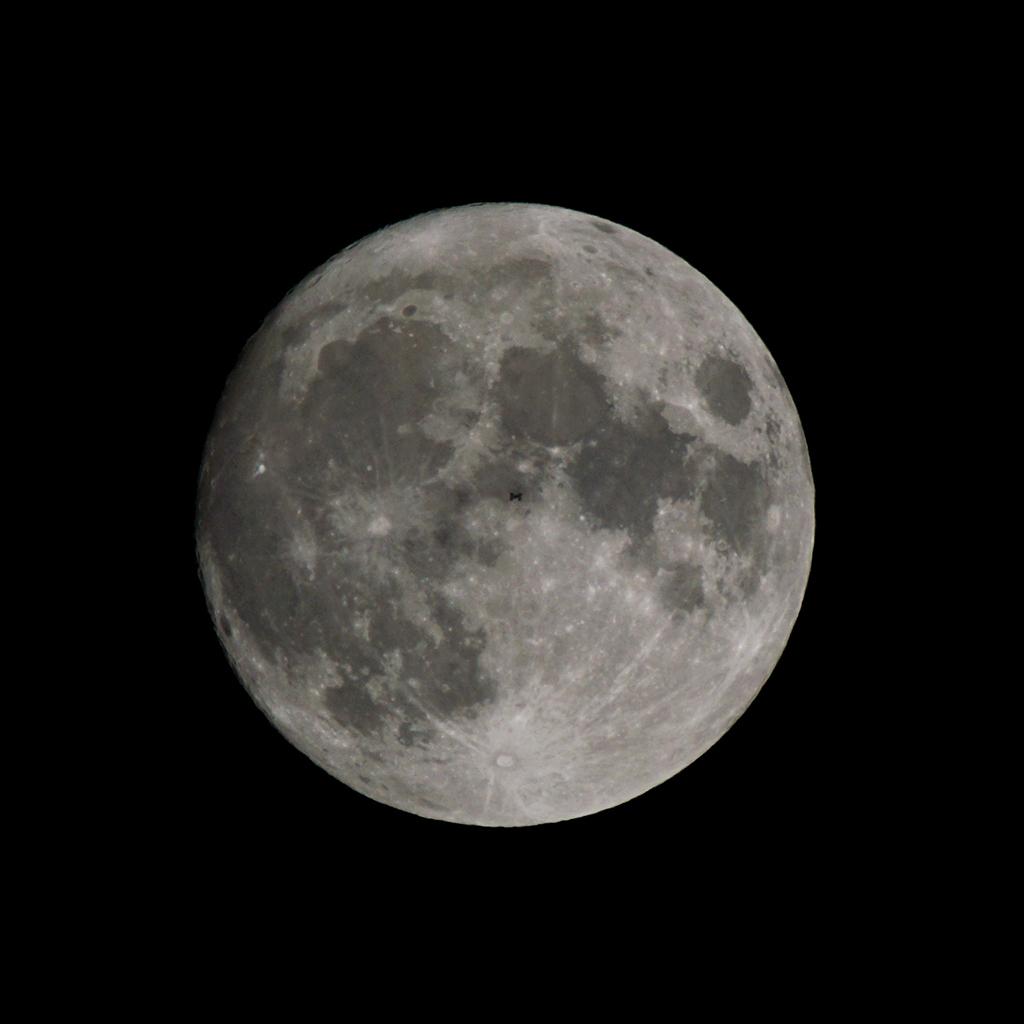 The International Space Station is captured transiting the nearly full Moon on Sept. 30, 2020, as seen from the Mall in Washington. 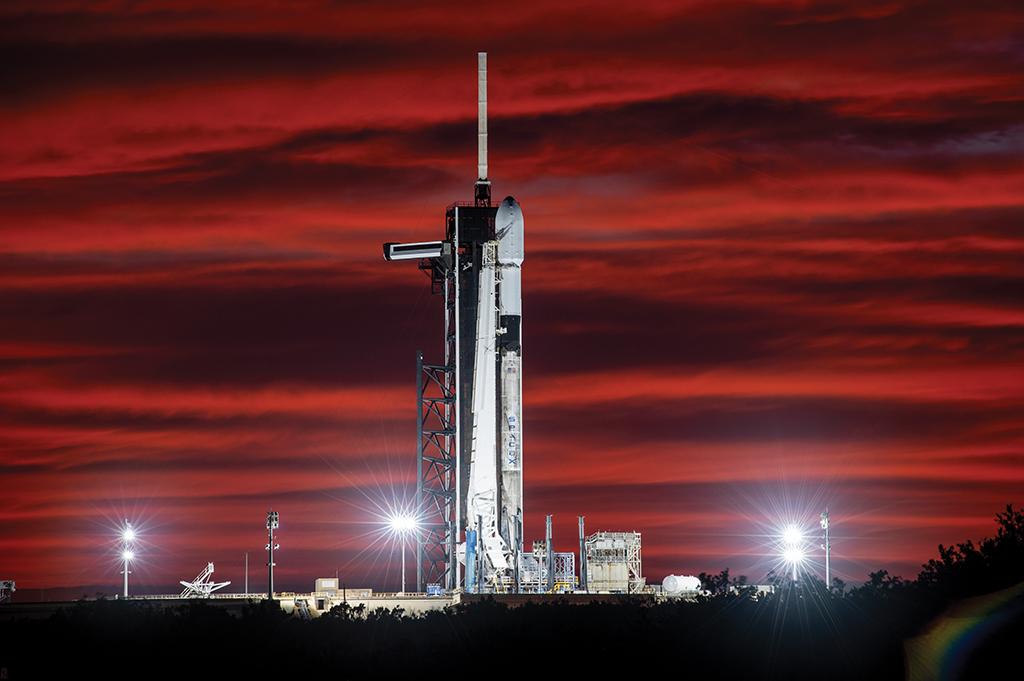 A blood-red sky provides a remarkable backdrop at Launch Pad 39A. This untouched shot was taken more than 40 min. after sunset on a mostly-overcast night and produced a scene I have not previously shot in my years of rocket photography. 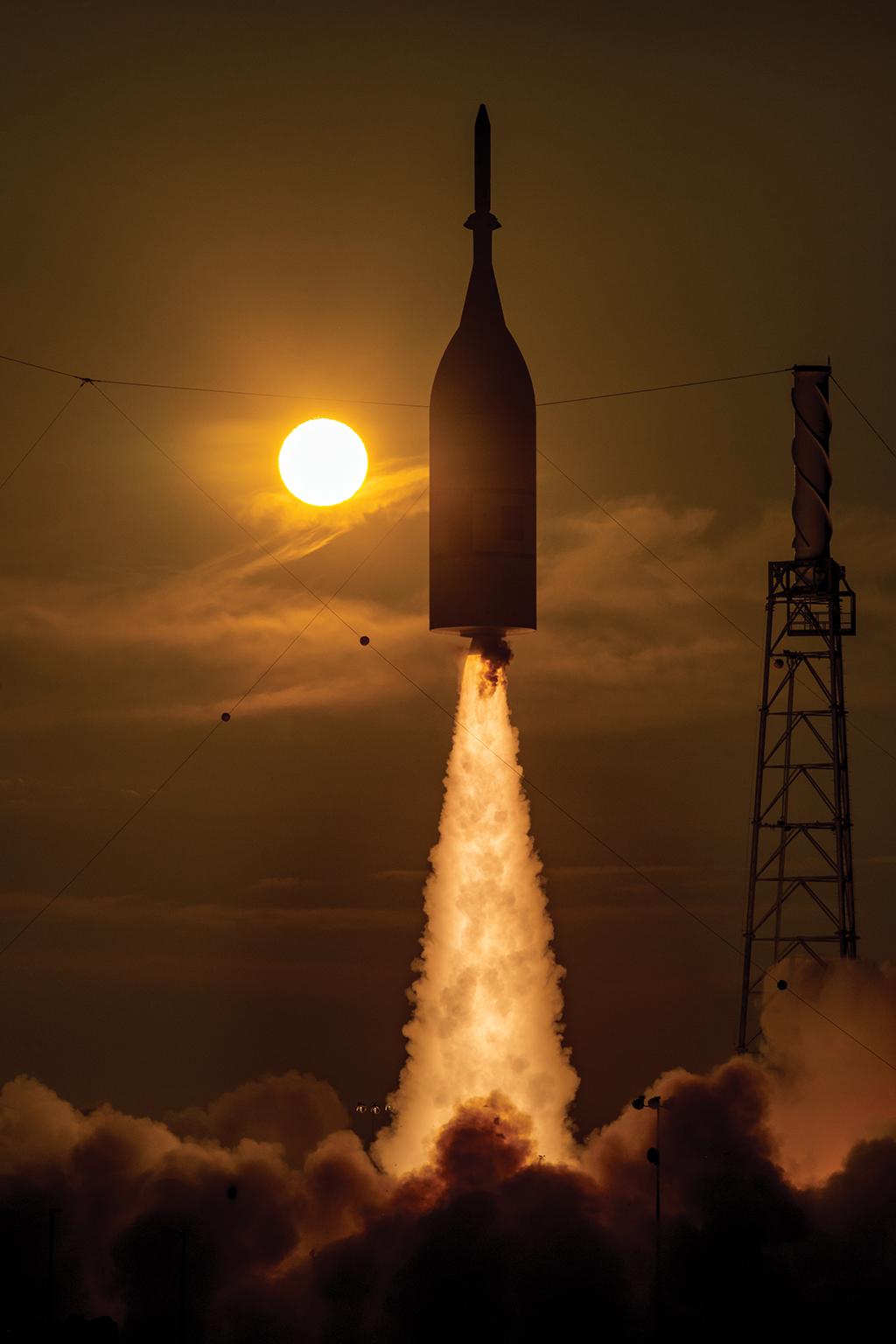 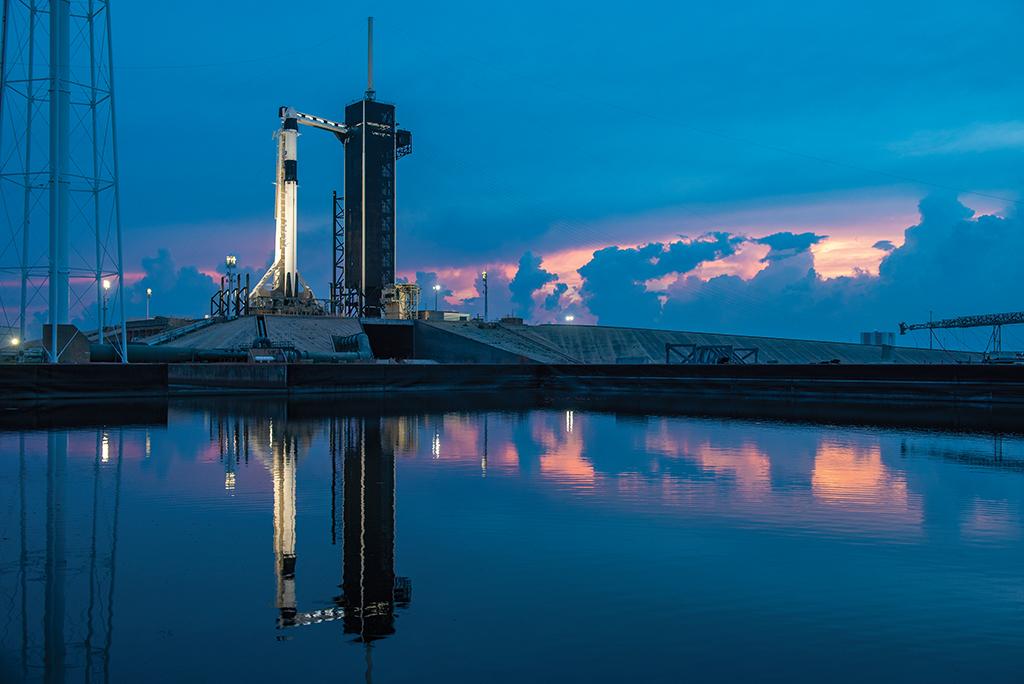 Falcon 9 on Launch Pad 39A ahead of the first crewed launch to the International Space Station with Bob Behnken and Doug Hurley. 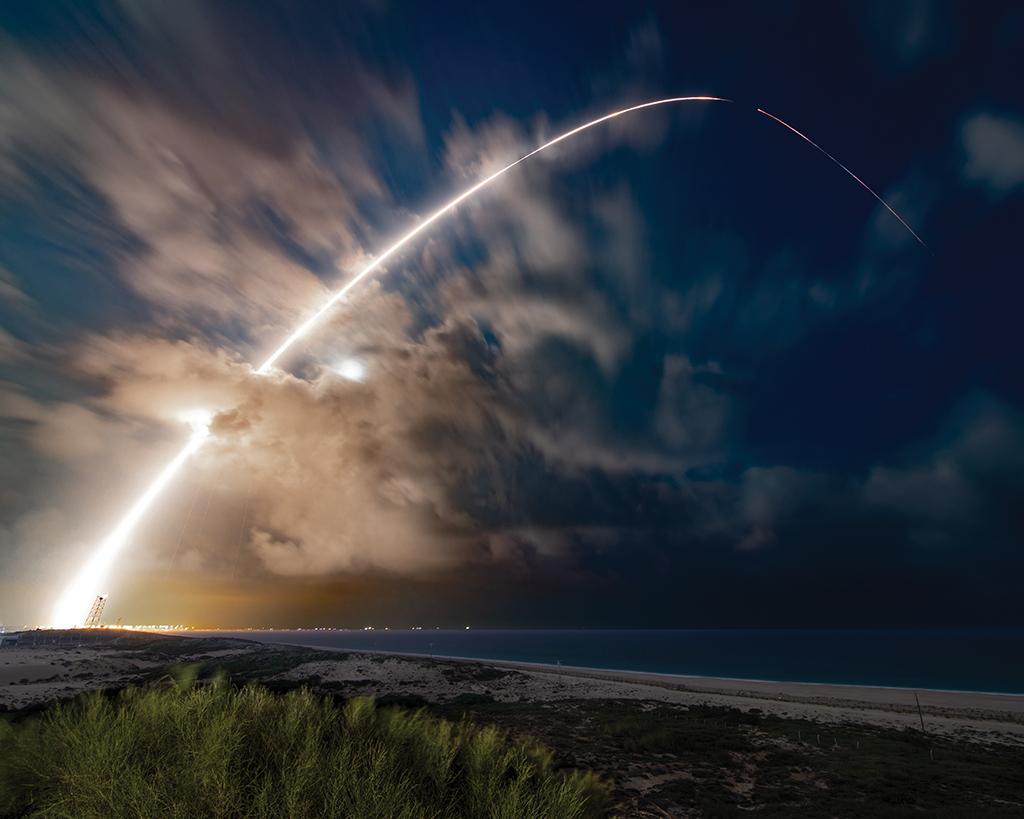 The first night launch streak photo of the Israeli “Shavit” launcher, taking the “Ofeq-16” satellite to orbit. The rocket blasts through the clouds, and above the Moon, heading into orbit. This is the only system that launches west due to Israel’s location by the Mediterranean Sea.

Do you want to submit your own photos this year? The 2021 Photo Contest submissions are now open. Enter here and submit your photo entries on various categories.