Since the very first experiments were conducted almost exactly 100 years ago, aerial refuelling has become a mainstay of military operations around the world.

The need for strategic air tankers was originally driven by the need to keep strategic air bombers airborne around the clock to counter a nuclear threat. After that, tactical tankers emerged in response to a desire for greater flexibility in airborne operations. The ability to move aircraft around dynamically to different bases, for example, makes them more difficult to target, while the ability to invest in a larger number of tactical tankers in contrast to a smaller number of strategic aircraft spreads the risk, and builds more resilience into the network with more tankers in the air. Having multiple tankers spread over greater geographies can enable more individual missions to be conducted, and more tracks to be covered.

Cost is always a consideration, which is why using an aircraft that is fit for purpose is so important. Strategic tankers tend to be much larger aircraft, often based on a civilian airline platform. Tactical tankers are typically (but not always) smaller, and in the case of the KC-390 Millennium from Embraer it has a cost-effective combination of initial purchase price and lower ongoing operating costs than its contemporaries. The KC-390 is also particularly nimble, with the ability to take-off and land from airfields with minimal ground support, on difficult terrain, on runways that are short, semi-prepared or even damaged.

Renowned as an aircraft with true multi-mission capability, the KC-390 is quick and easy to configure and can be made ready in hours, thanks to innovations such as the automated cargo handling system. It can operate as both a tanker and receiver aircraft for in-flight refuelling, by day or by night, the task being made easier and safer by the addition of an observer window and night vision cameras. 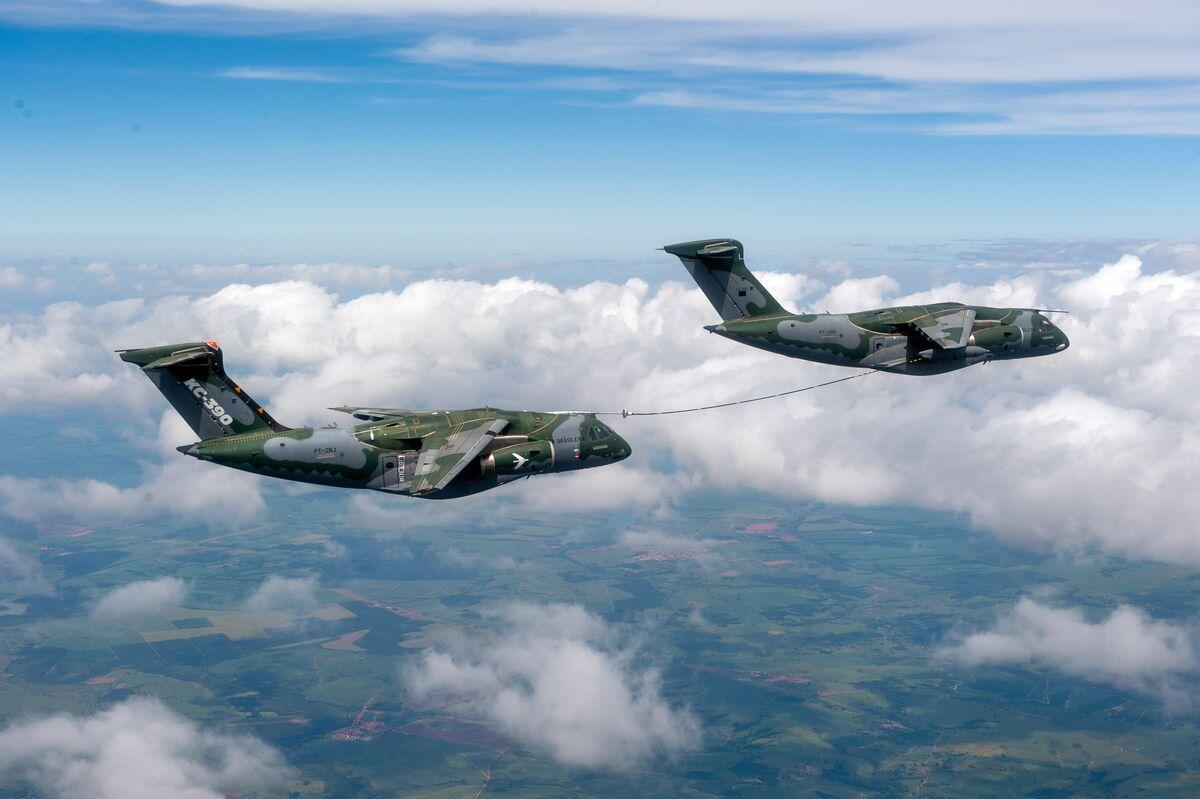 The KC-390 can be equipped with advanced refuelling pods (Cobham 912E Series) that meet the high-performance criteria of the aircraft, providing a lightweight and efficient solution. Each pod provides fuel transfer of up to 400 US gallons per minute. Removable auxiliary fuel tanks can be installed in the cargo compartment to expand the aircraft fuel offload capacity or range performance. The Millennium is also capable of operating as a receiver through a fuelling probe installed on the upper forward fuselage, slight left of centre. It demonstrates excellent characteristics for aerial refuelling with low levels of vibration and higher speeds to reduce the workload for the receiver pilots.

Indeed, the aircraft’s operating envelope is impressive. It can accommodate the speed and altitude requirements of both fixed and rotary wing aircraft flying at speeds from 120 KCAS to 300 KCAS from 2,000ft to 32,000ft. This is largely achieved thanks to its highly reliable twin IAE V2500 jet engines that give it a cruising speed of 0.8 Mach, the highest of any aircraft in its category, enabling it to conduct aerial refueling missions at the speed most suitable to the receiver aircraft. It also has an impressive range of more than 4,500 nautical miles with fuselage tanks.

Survivability is also a key attribute of the KC-390 Millennium. The combination of a human/machine interface (HMI) with a full fly-by-wire (FBW) control system, significantly reduces crew workload, whereas the enhanced situational awareness that HMI delivers also helps protect the safety of the crew and the mission. The systems installed are designed to improve crew co-ordination and ultimately optimise control.

The aircraft also features advanced mission software to provide total control over the mission scenario to the crew, while a fully integrated Onboard Maintenance System (OMS) looks after the health of the aircraft itself.

The Embraer KC-390 Millennium provides the perfect blend of mature, reliable technology with state-of-the-art thinking to ensure the best of all worlds in a tactical tanker. It is also designed as a practical aircraft, its robust four-wheel Bogie-type main landing gear in each LH and RH sides and intelligent engine mounting allowing it to take off and land on any surface soft or hard, and in any weather, delivering total operational performance.

In a world that demands flexibility from its aircraft, the KC-390 delivers. With its speed and performance, its operational efficiency, low life-cycle costs and high availability, the multi-mission Millennium is setting a new benchmark. And with its use of the very latest technology to deliver safety and reliability as standard, the KC-390 represents an exciting opportunity for those seeking a tactical tanker, and so much more.