Cargo aircraft have developed significantly since the first biplanes began delivering mail and simple freight more than a century ago. The level of performance and the weight of the cargo have increased along with the sophistication of the aircraft, including their avionics, their mission delivery platforms, and their engines. While the fundamental role of a cargo aircraft to carry and deliver cargo may not have changed much in those 100 years, the demands placed upon the world’s Air Forces and their capabilities have certainly evolved. Different aircraft with specific mission capabilities have also come into play, from cargo and troop carriers to VIP transport and air-to-air in-flight refueling tankers.

A challenging economic environment has however led to a tightening of the purse strings, and Air Forces have been obliged to re-evaluate their procurement strategies. Developed under the very demanding requirement from the Brazilian Air Force (FAB) to replace the aging C-130, Embraer designed the C-390 Millennium, a military transport aircraft, to set new standards in its category. Some of the aircraft’s strengths are robust design, greater flexibility, proven state-of-the-art technology, and easier maintenance.

This multi-mission military transport aircraft is equipped with the with latest state-of-the-art technology, not simply for technology’s sake, but rather because it helped to fulfil a better, safer, easier mission accuracy, and look after the people in the aircraft and on the ground. With the Embraer C390 Millennium, Embraer has created a new generation of multi-mission aircraft which has been designed from the outset with flexibility at its core, setting a new standard in medium air mobility.

Setting the new standards in the category

The C-390 Millennium and the designation KC-390 Millennium fly faster and carry more cargo than any other military freighters of the same category and are the ideal platforms for military tactical and strategic operations and humanitarian relief. The C-390 and the KC-390 Millennium require fewer on-demand inspections and maintenance, with levels of simplification normally associated only with commercial aircraft. This feature, combined with highly reliable systems and components, reduces the time on the ground and the overall operating costs, contributing to excellent availability levels and low life-cycle costs.

The new technology it features is there to fulfil a very specific purpose: the combination of a human/machine interface (HMI) with a full fly-by-wire (FBW) control system, for example, significantly reduces crew workload, and the enhanced situational awareness that HMI delivers also helps protect the safety of the crew during the missions. The aircraft also features advanced mission software to provide total control over the mission scenario to the crew, while a fully integrated Onboard Maintenance System (OMS) looks after the health of the aircraft itself.

In terms of aerial delivery, advanced avionics enable the crew to calculate an air release point with exceptional precision, while a modern Cargo Handling and Aerial Delivery System (CHADS) provides remote and automatic release of cargo in-flight at all altitudes, high and low, and complete situational awareness for the Load Master and crew.

Both the internal and external configuration of the C-390 can be quickly and easily changed to accommodate different needs: aerial assault; aerial resupply; aerial firefighting; aeromedical evacuation (stretchers and ICUs); humanitarian aid support; search and rescue; and special operations. The C-390 can carry, for example, up to 80 troops (or 66 paratroopers) or accommodate up to 74 stretchers and eight attendants. Or it can be configured to accommodate seven 463L pallets, a combination of pallets and troops, or carry light tanks, vehicles or even helicopters.

The C-390 can also be reconfigured as both a tanker and receiver aircraft for in-flight refuelling, by day or by night, and the task is made easier and safer with the addition of an observer window and night vision cameras. The in-flight refueling capacity between two aircraft of the same model using inflight refueling underwing “pods” is unique in this category. This allows KC-390 Millennium operators to expand their logistical transport capacity for search and rescue operations, which increases the autonomy and range of their missions. Each pod provides fuel transfer of up to 400 US gallons per minute. Removable auxiliary fuel tanks can be installed in the cargo compartment to expand the aircraft fuel offload capacity or range performance.

A multi-mission aircraft with performance at its core 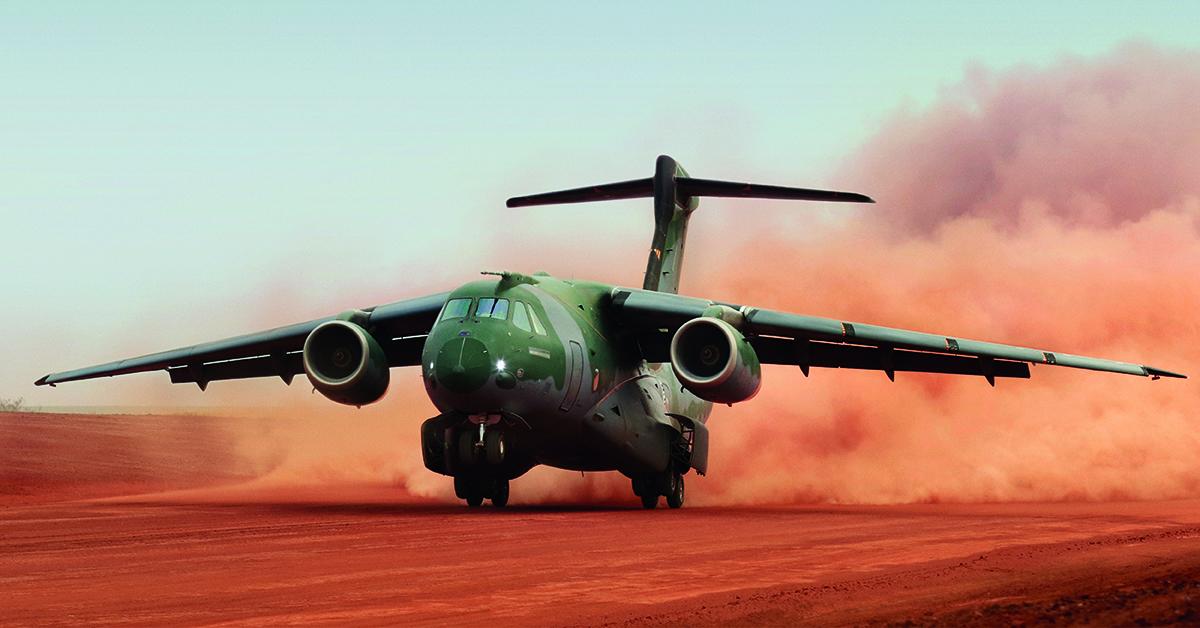 Performance is at the heart of every feature of the aircraft: it has a maximum payload (concentrated) of 26 metric tons and its highly reliable twin IAE V2500 jet engines give it a cruising speed of 0.8 Mach which means the Millennium can deliver more payload much faster than any other airplane in the medium airlift market. And with a range of 3,370 miles, it can also deliver anywhere in the world to some of the planet’s most inhospitable places, in any weather, from the most arid desert to the snow and ice of the freezing Arctic.

Since its first delivery to the Brazilian Air Force (FAB) in 2019, the Embraer KC-390 Millennium multi-mission aircraft has been proving its capability, reliability and outstanding performance on domestic and overseas missions, including a joint operational exercise with the US Air Force at the start of this year. The entrance of the Embraer C-390 Millennium into the market comes at a crucial moment where air forces and governments seek to update their airlifter fleet and to incorporate aircraft with modern technology. FAB’s current fleet of the Embraer KC-390s stands at four and these aircraft have exceeded 3,650 flight hours in operation, including extensive use in operations to transport equipment and medical supplies across the country urgently needed to address the COVID-19 situation in Brazil.

When it comes to the evolution of transport airplanes, the C-390 Millennium is a genuinely versatile machine that provides the answer to global demand for vital airlift capabilities at an affordable cost. It is an airplane that is already proving itself with FAB as a game-changing force multiplier, re-defining the airlift space as a platform of unmatched versatility.