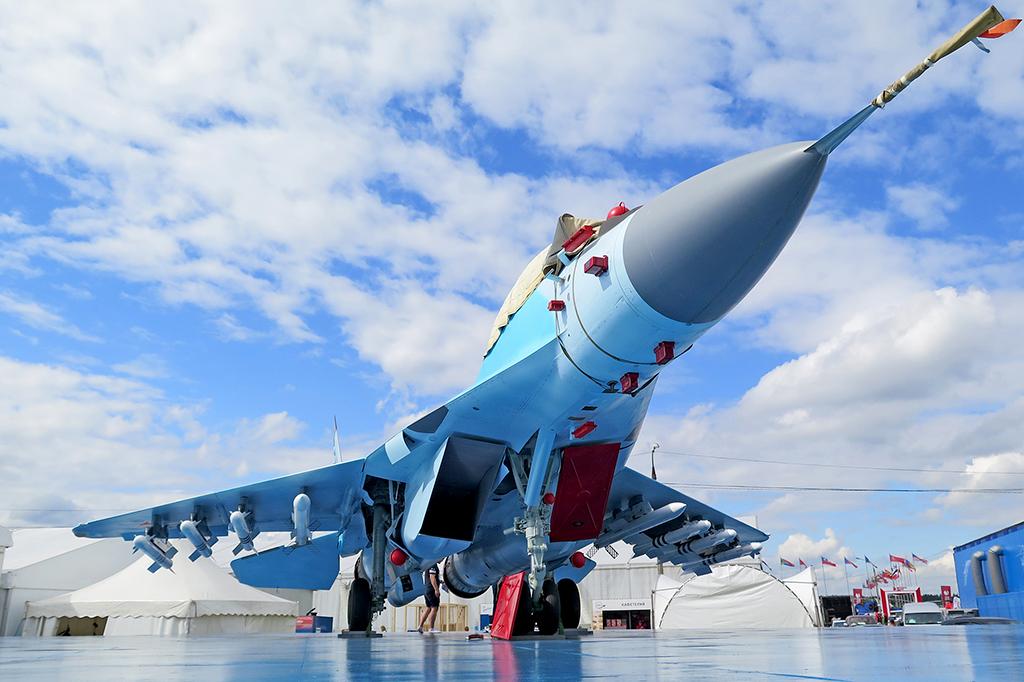 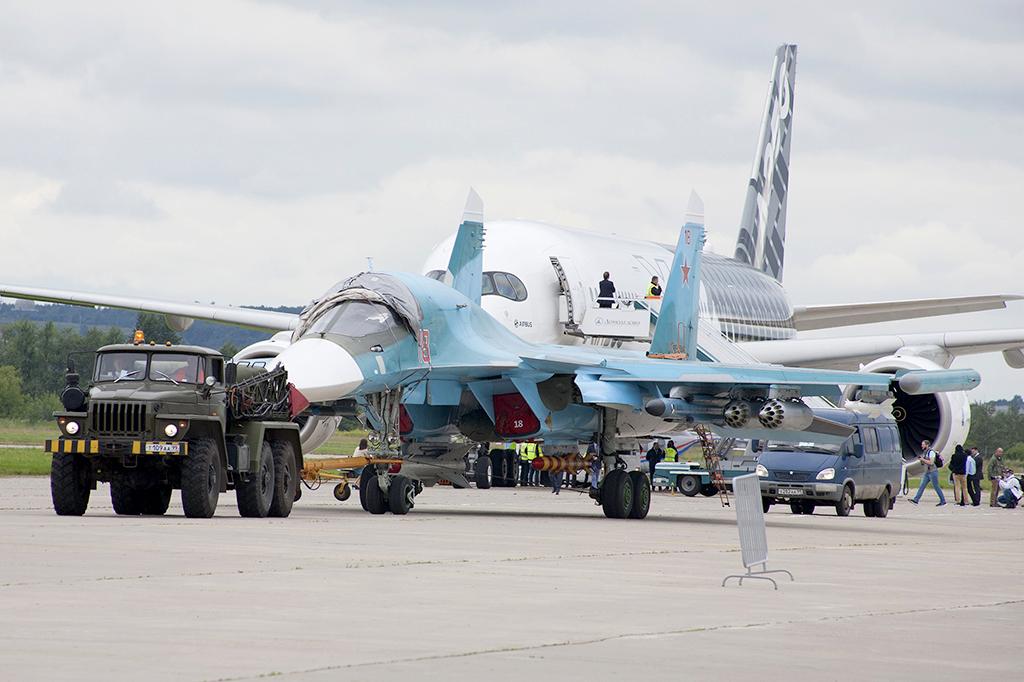 Russia’s Sukhoi Su-34 “Fullback” tactical bomber is towed past Airbus’s A350 civil airliner on its way to the static display pen. The twin Saturn AL-31F-powered aircraft, which has recently been providing air support in Syria, is distinguishable by its duckbill nose and side-by-side wide cockpit arrangement. 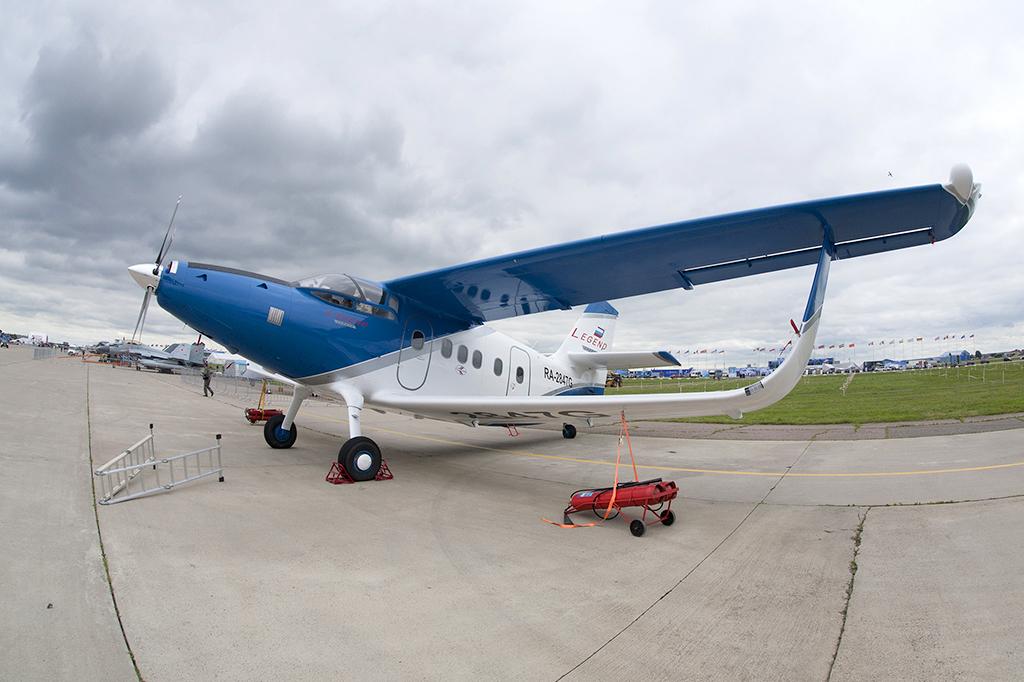 This modern-day reimagining of the 1947-vintage Antonov An-2 utility/agricultural aircraft was developed by the Siberian Research Institute of Aviation. The all-composite aircraft, powered by a single Honeywell TPE331 turboprop engine, provides substantially better speed, range, payload and comfort compared to the all-metal, radial-engine Soviet mass-produced An-2, which first flew in 1947. The TVS-2DTS completed its first flight in July. 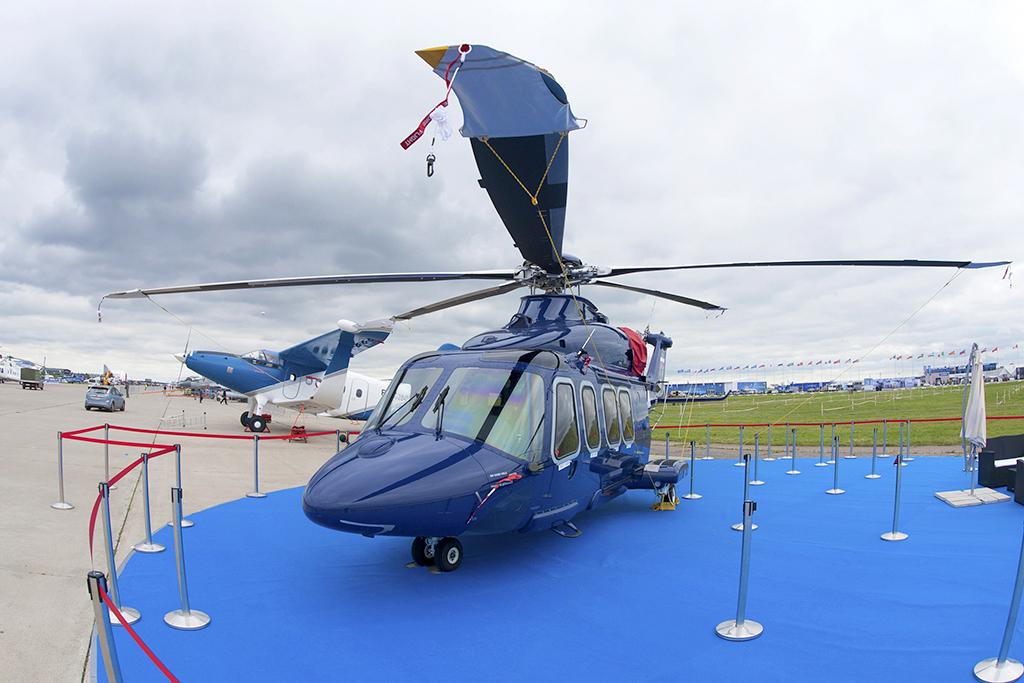 HeliVert completes final assembly of the 15-passenger, five-blade AW139 at its National Helicopter Building Center in Tomilino near Moscow. The first aircraft assembled under the HeliVert joint venture between Russian Helicopters and Leonardo lifted off in December 2012.

Leonardo also completes final assembly of the AW139 in the U.S. in Philadelphia, and Boeing recently selected the type—rebranded the MH-139—to compete for an 84-helicopter U.S. Air Force requirement. 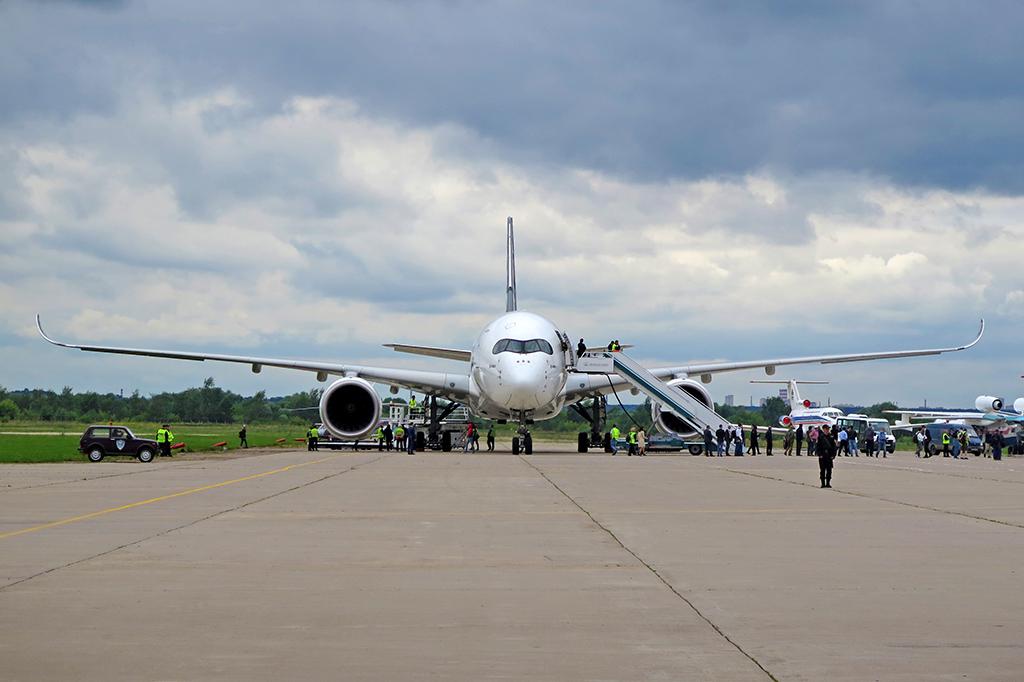 The Airbus A350-900 product demonstrator has come to MAKS for the second time as the manufacturer continues to woo Aeroflot, which has been mulling a sizable order for the twin-engine widebody for several years. With Russia’s economy slowly recovering, Airbus will be looking to take advantage of Boeing’s diminished presence at MAKS and potentially close a deal by year-end. The A350 first arrived at Zhukovsky's Ramenskoye Airport in 2015. 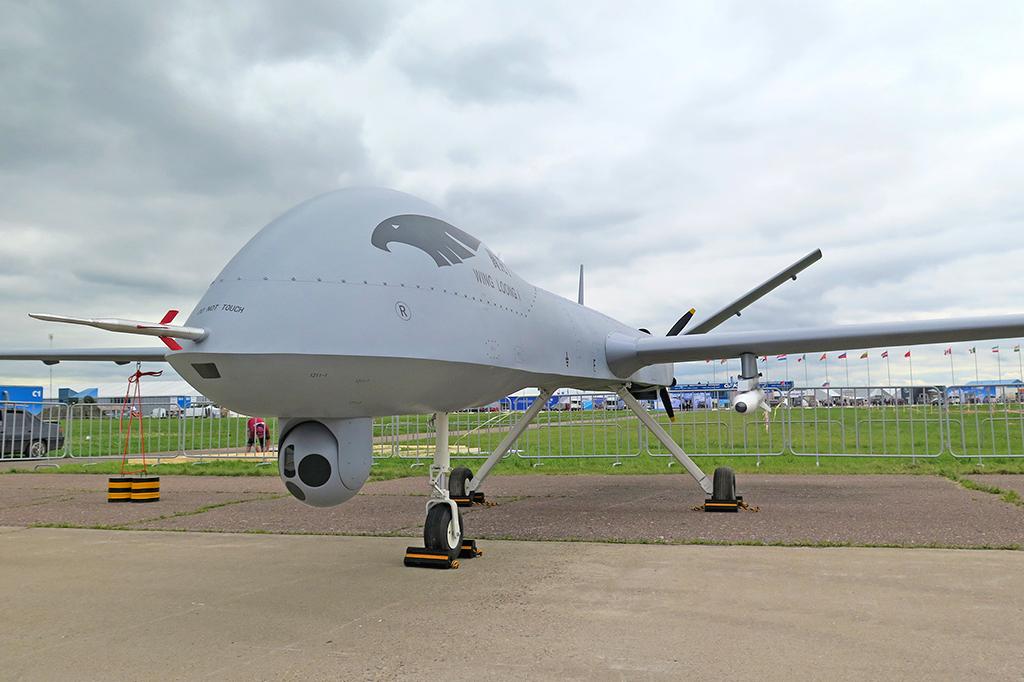 Chengdu Aircraft Industry Group’s first-generation Wing Loong has turned out for MAKS, but it is an underwhelming sight, since China's brand-new Wing Loong II showed up at the Paris Air Show in June. The more capable Wing Loong II was the talk of Le Bourget and a symbol of China’s assertiveness in the international drone market. The Russia government probably has no use for a Chinese-manufactured drone, especially one so similar in form to the General Atomics Aeronautical Systems MQ-9. However, China will be targeting other customers throughout the show. Perhaps the more luring attraction will be the debut of Russia’s RHV-30, an unmanned tiltrotor aircraft conceived by the VR-Technologies design bureau. 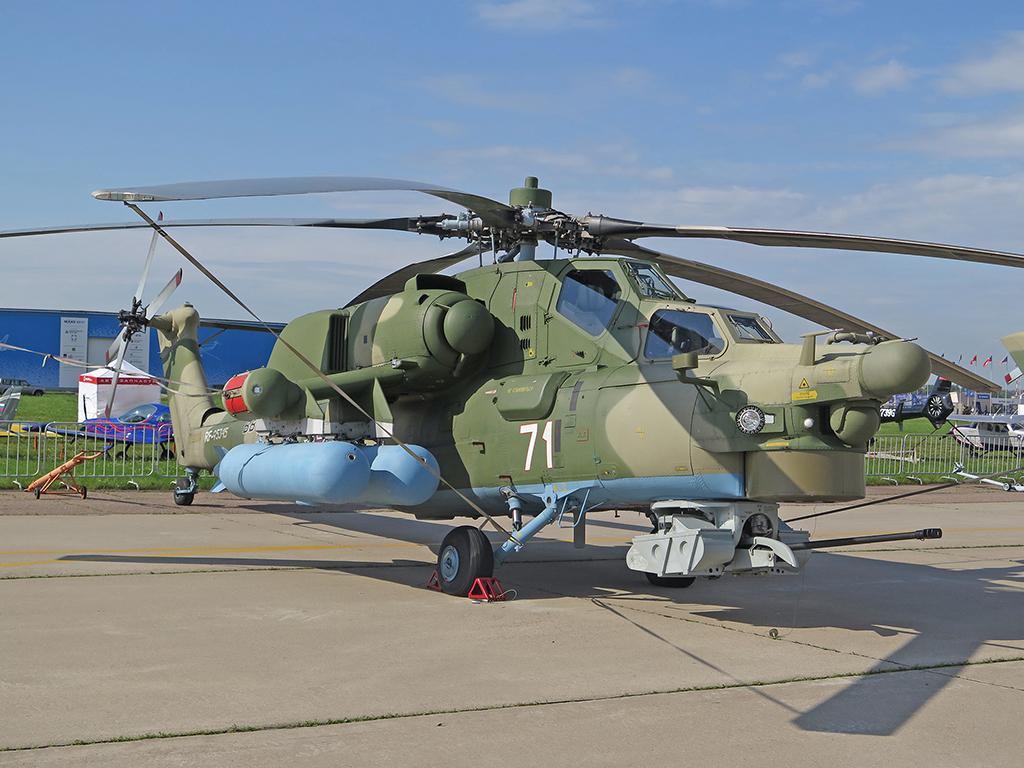 The tandem-seat Mil Mi-28N “Havoc-B” is Russia’s tank-killing equivalent to the Boeing AH-64 Apache gunship, which was commissioned in 1976 and obtained design approval in 1981. The five-blade gunship carries up to 16 anti-tank missiles or a combination of missiles and rocket pods, with a 30-mm canon slung under the forward fuselage. Mi-28N is the basic configuration for the Russian Aerospace Forces, displayed at MAKS carrying four-barrel guns.

The helicopter measures 21 m (70 ft.) in length and is 4.7 m high with a rotor diameter of 17.2 m and top speed of 305 kph (190 mph) at the normal takeoff weight of 11,000 kg (24,250 lb.). The two-person crew includes the pilot and navigator. The aircraft’s primary missions are daytime search and destruction of enemy tanks and "soft-skin" vehicles as well as fire support for ground combat troops. 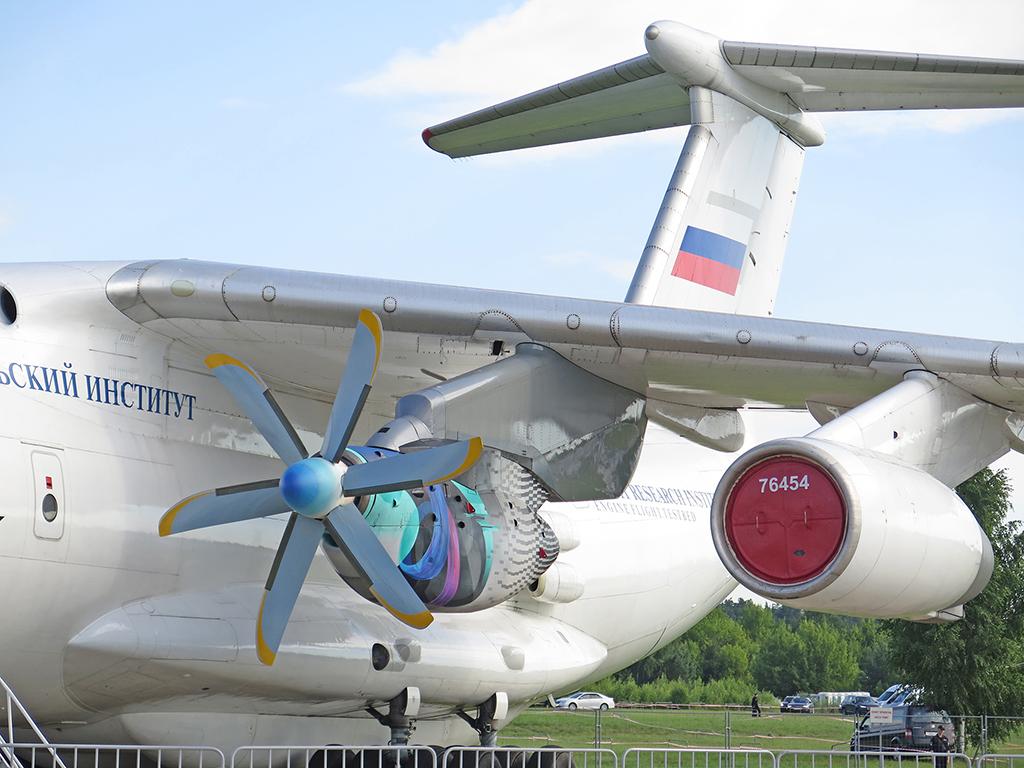 The Gromov Flight Research Institute’s engine flight testbed has been called into service to support the Ilyushin Il-112V light military transport program. The aircraft displayed at MAKS carries the Il-112V’s six-blade TV7-117CT turboprop engines, which generate 7,716 lb. thrust each. First flight of the Il-112 is expected later this year, according to UAC. The twin turboprop will have a cruise speed of 450-500 kph (280-310 mph) and altitude of 7,200 m. Its minimum runway length is 1,200 m, according to the manufacturer. 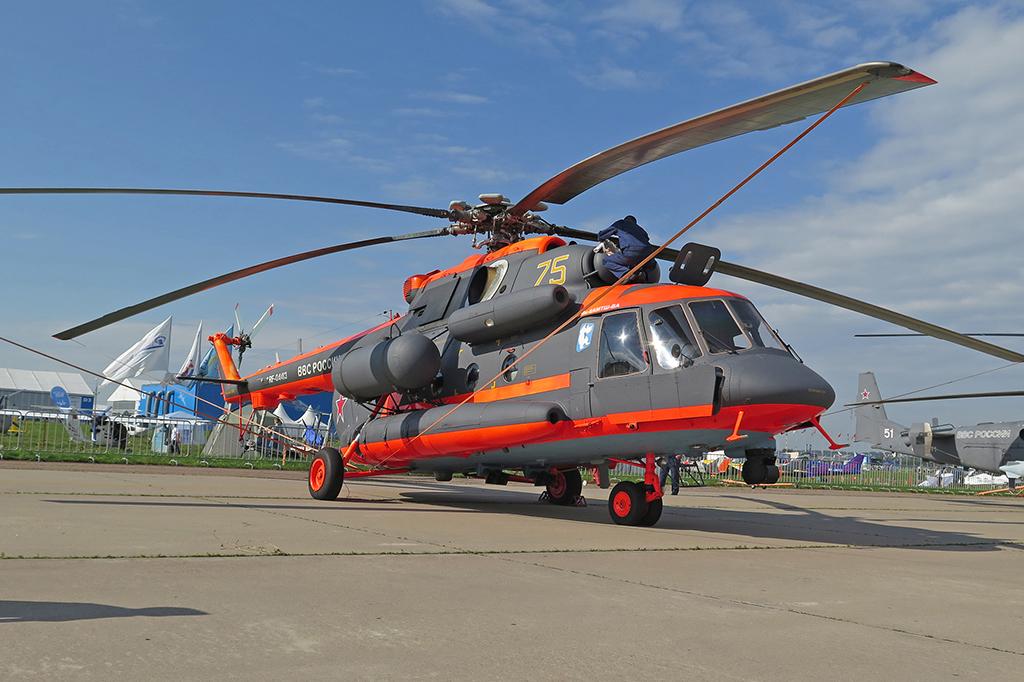 The high-visibility Mil Mi-8AMTSh-VA “Terminator” is the latest derivative of the NATO-designated Hip armed assault and transport helicopter series, specially designed for Arctic operations in sub-zero temperatures. The aircraft are delivered to Russian Helicopters’s Ulan-Ude aviation plant, which specializes in the Mi-8/17 series helicopter.

The Terminator is derived from the Mi-8AMTSh-V military transport helicopter, taking advantage of the new Klimov-made VK-2500-03 turboshaft engine and more powerful TA-14 auxiliary power unit, the manufacturer says. The aircraft can operate in extreme temperatures of -40С (-40F) and has auxiliary fuel tanks for a range of 1,300 km (810 mi.). 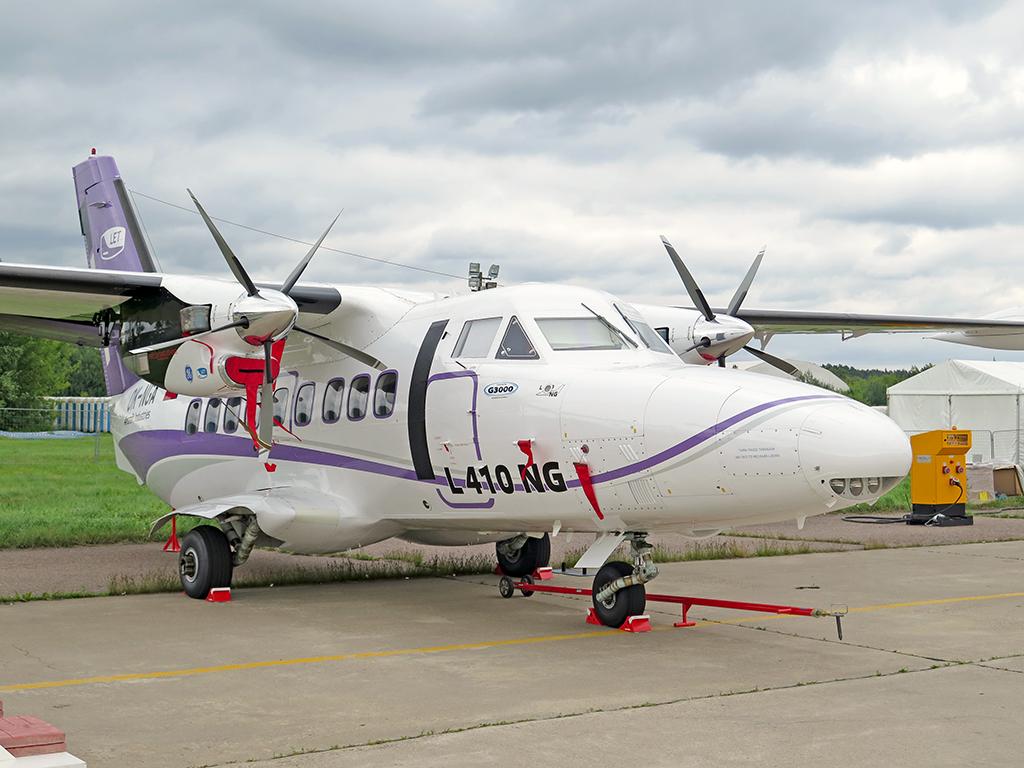 The GE Aviation Czech H85-powered aircraft was on display here, as LET plans to set up parallel production in Russia via a partnership with the Ural Factory of Civil Aviation. The 19-passenger L-410NG is more powerful and achieves longer ranges compared to the L-410 UVP-E2 it succeeds. A military derivative of the L-410 UVP-E2 was also on display, featuring detachable snow skis for the landing gear. The aircraft specializes in taking off and landing on short, unprepared runways and on snow. 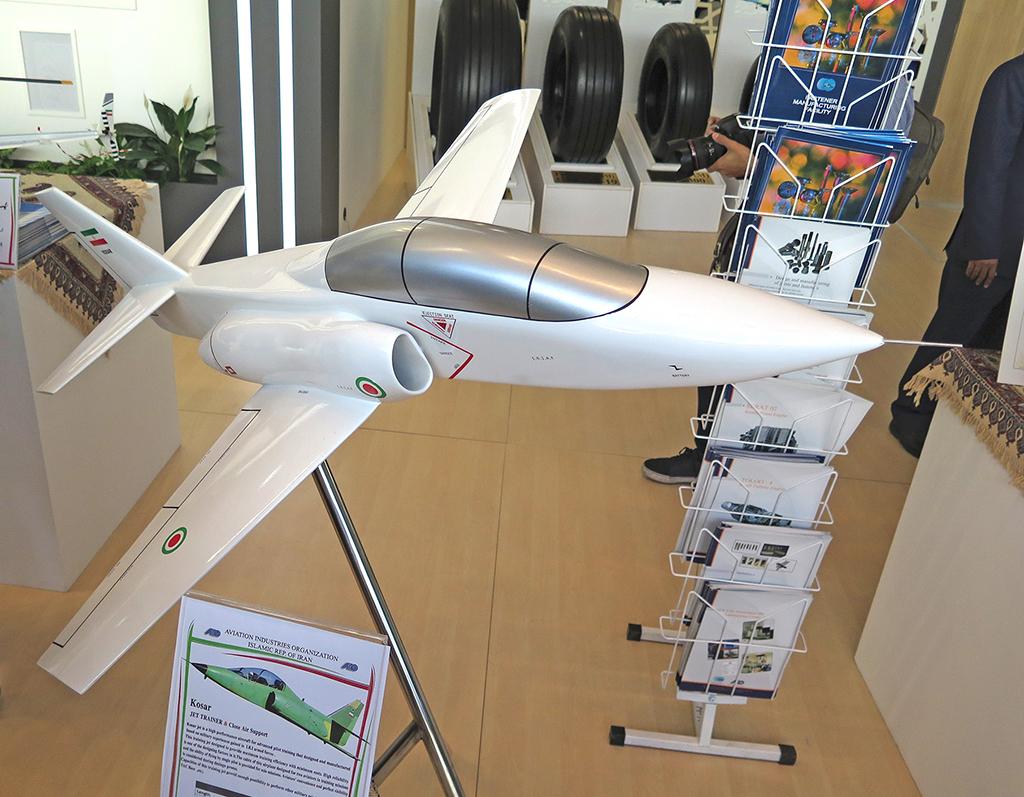 Iran is talking up its latest military developments at MAKS, including two new civil helicopters and a military trainer aircraft.

Iran’s Aviation Industries Organization (IAIO) Research Center has been developing the twin-engine, tandem-seat “Kosar” (pictured) for about three years, and the aircraft could soon take flight after recently beginning ground testing. IAIO officials say Iran’s military intends to buy 50 aircraft. The full-size aircraft is 42 ft. long and 15 ft. high, with a wingspan of 36 ft. It has a maximum takeoff weight of 13,624 lb., according to a promotional specifications chart.

The MiG-35 is just one of hundreds of new, old and historic aircraft on display at MAKS 2017. For a U.S.-based aviation journalist, getting to Zhukovsky, home of Russia’s premier flight research center, feels like trekking to the far edge of the Earth. But when you finally get off the Soviet-era suburban train at Otdykh Railway Station and emerge from the overgrown forests onto the Zhukovsky flight line in the full heat of summer, you are met by the most extraordinary and eclectic mix of aircraft. You will not find this collection of aircraft assembled anywhere else in the world. From Soviet-era bombers to the fifth-generation Su-57 (also known as the T-50 and Su-50), there is something mythical, and almost magical, about Russian aerospace.

Here we present a small sampling of the MAKS 2017 static display.

Correction: An earlier version of this story attributed comments to the former MiG CEO. Those statements were made at MAKS by the current MiG CEO, Ilya Tarasenko, who has held the position since September 2016.