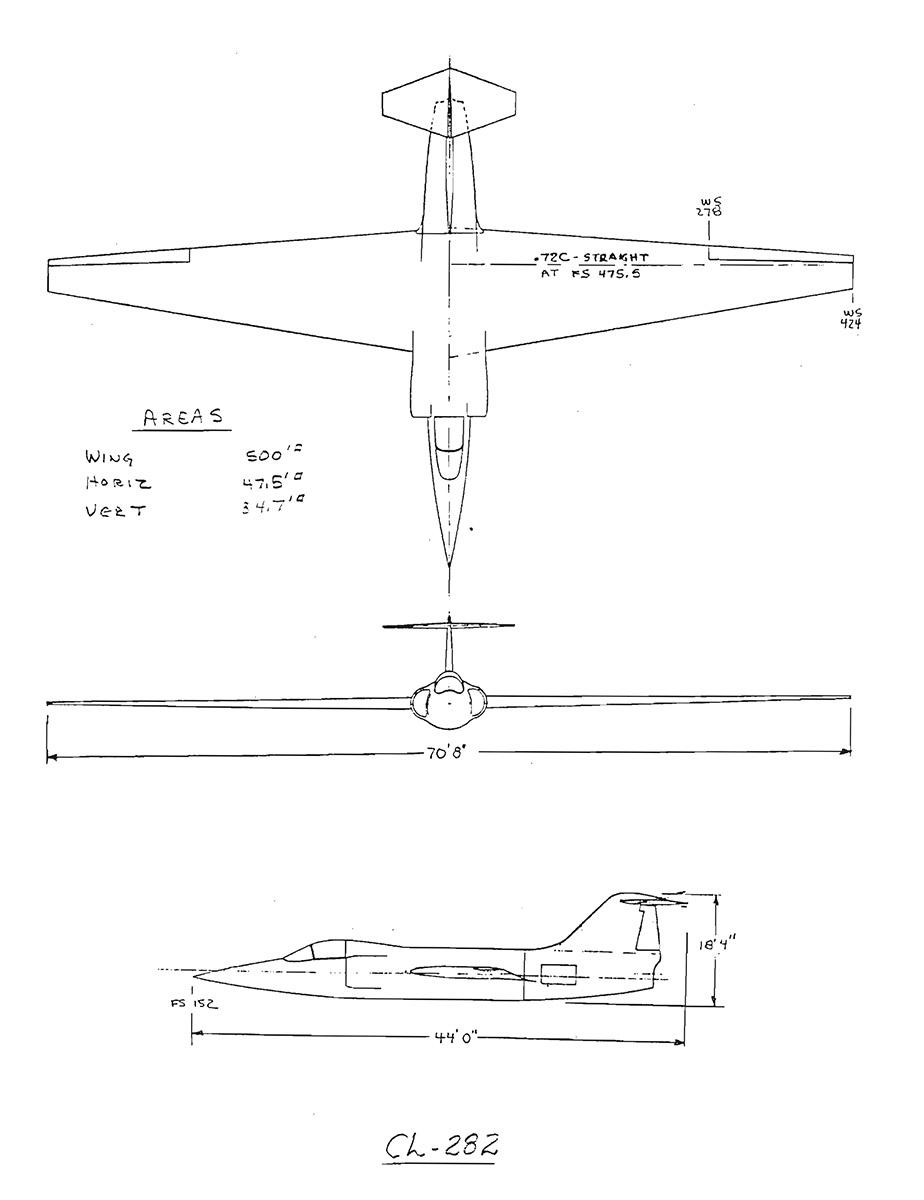 Lockheed Skunk Works chief engineer Kelly Johnson proposed the CL-282 design in 1954 for the U.S. Air Force’s requirement for a reconnaissance aircraft capable of overflying the Soviet Union without being detected or intercepted. The original proposal for what would eventually become the U-2 combined a shortened version of the fuselage of the recently defined XF-104 Starfighter with a large, glider-like high-aspect ratio wing. The CL-282 was to have been powered by a General Electric J73, but by the time the aircraft design came together under the CIA-led Project Aquatone in late 1954, the fuselage had grown to house the Pratt & Whitney J57 engine preferred by the Air Force.  The wings had also been extended to carry more fuel for longer range. 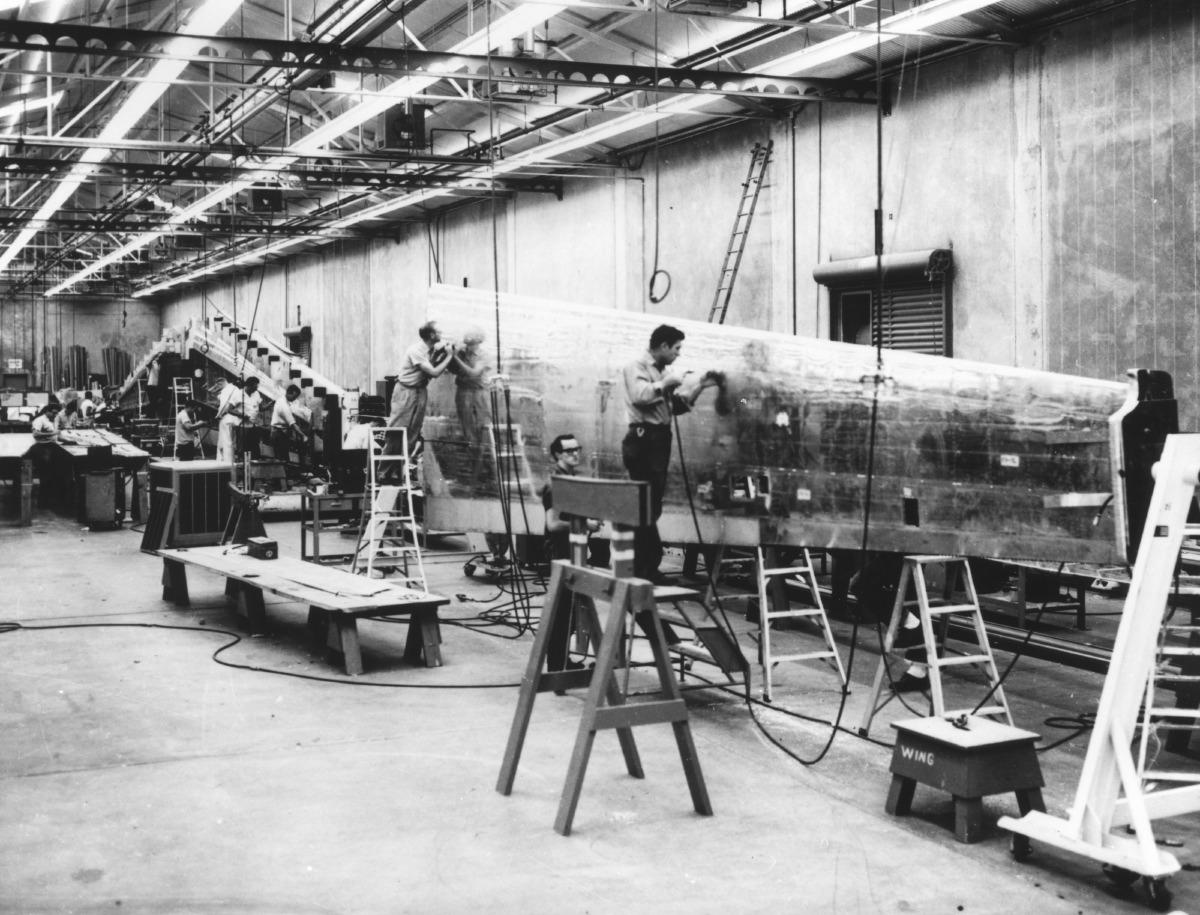 Lockheed was awarded an initial $22 million contract from the CIA for 20 aircraft. Assemblies for the initial prototypes were built in great secrecy in the Skunk Works, then located in Burbank, California. 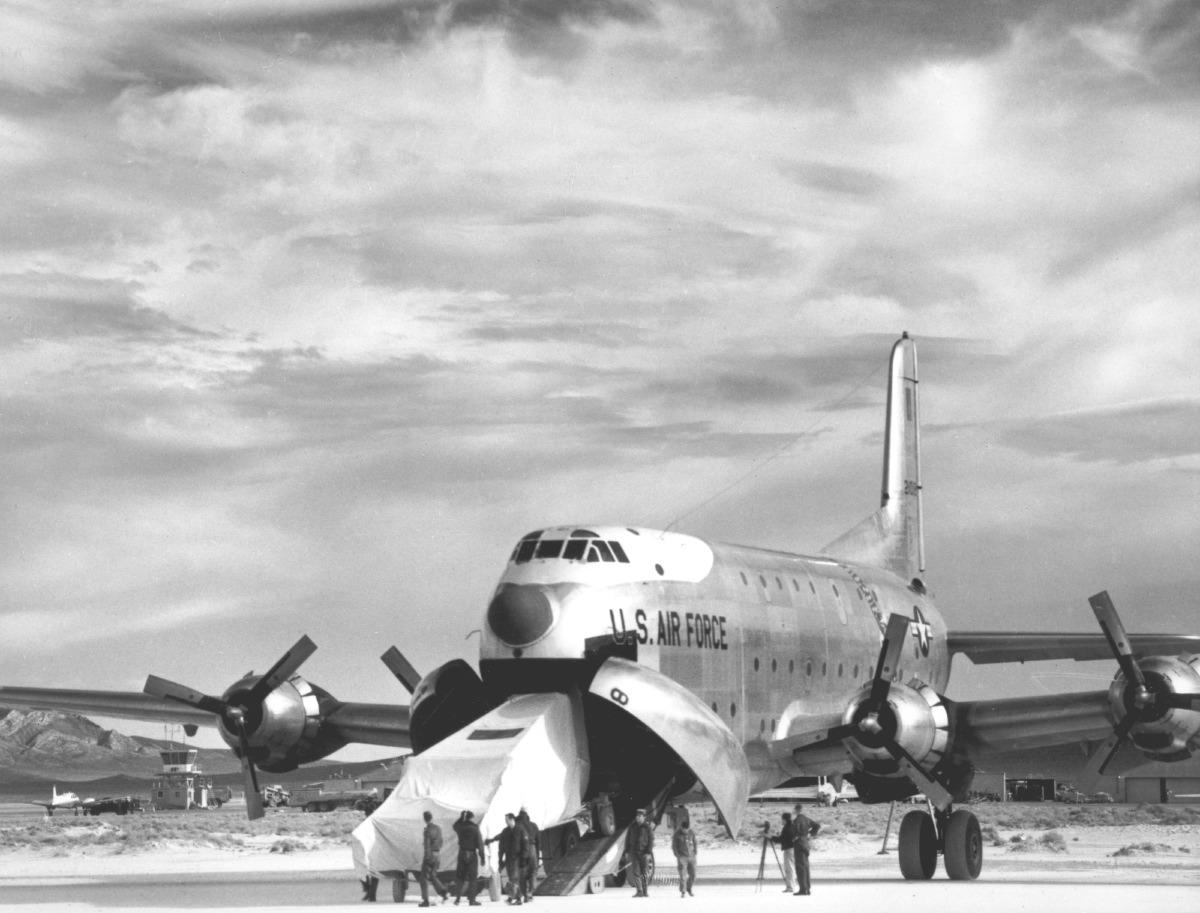 To ensure the classified project would stay secret from prying eyes, Lockheed selected a remote dry lake bed in Nevada for flight testing. The first aircraft was delivered to the site, nicknamed ‘The Ranch’ in July 1955 by a Douglas C-124 Globemaster. 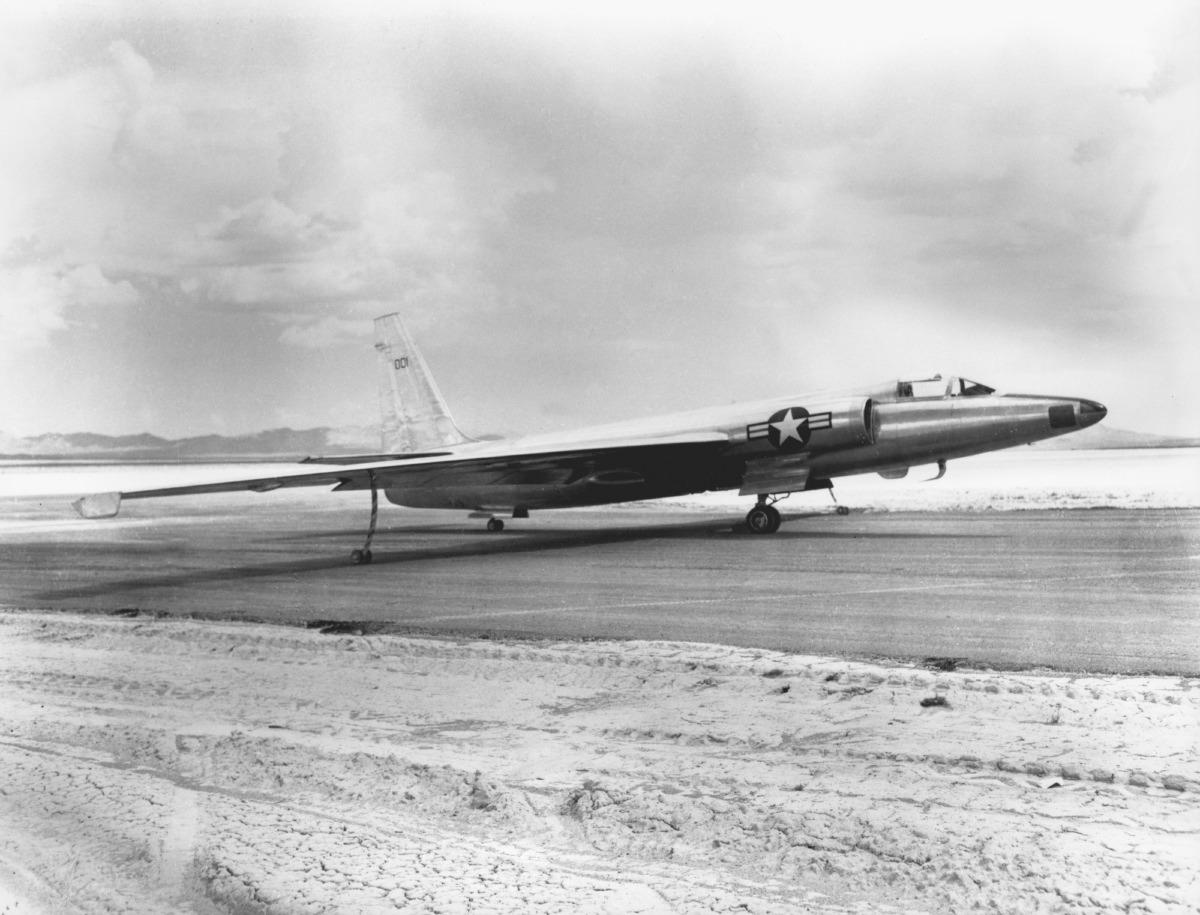 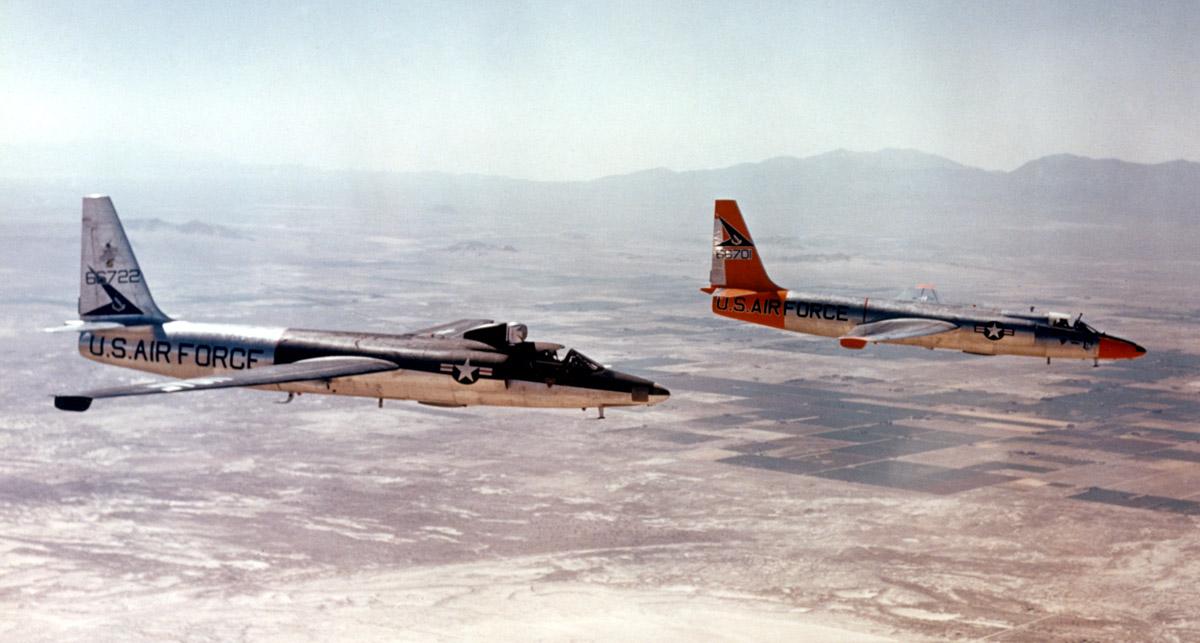 Surveillance flights began over the Soviet Union from Germany on July 4, 1956, but as production aircraft joined operations two U-2As remained on permanent assignment to the Air Force Flight Test Center at Edwards AFB, California, for test and research missions. Aircraft 56-6722, seen at the left, is now on display at the at the National Museum of the US Air Force at Wright-Patterson AFB, Ohio. 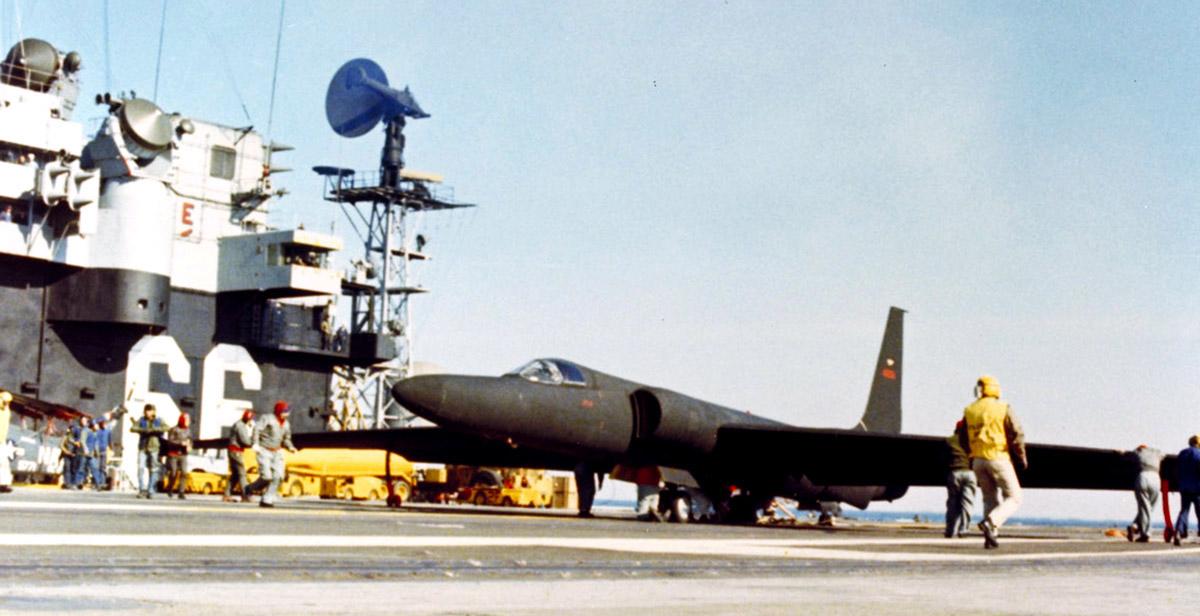 Following interest from the U.S. Navy in the potential of operating the U-2 from carriers on reconnaissance missions Lockheed conducted sea trials of specially modified U-2E variant on the USS America (CVA-66) in late 1969. Flown on initial trials by company test pilot Bill Park, the aircraft successfully trapped using a retractable tail hook. Although the tests were successful the extended range of the later U-2R variant made risky carrier-based operations unnecessary. 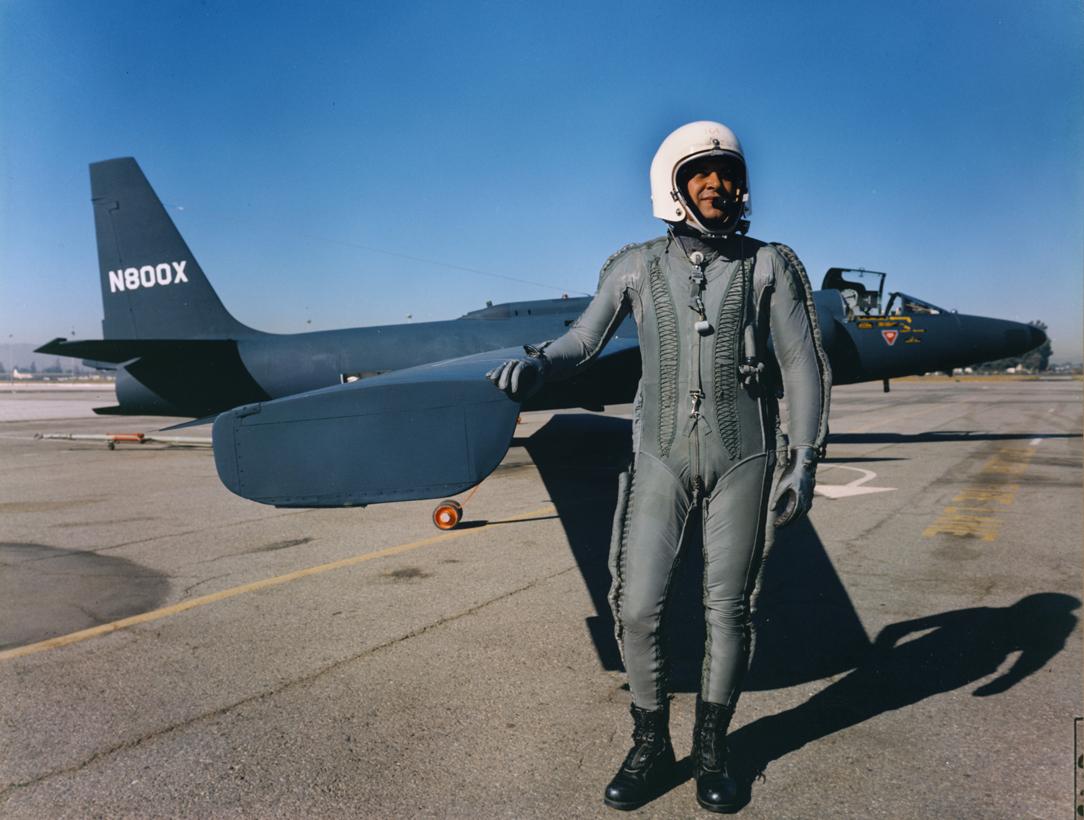 Air Force Capt. Francis Gary Powers was shot down in his U-2 by an SA-2 SAM while on a reconnaissance mission over the Soviet Union on May 1, 1960. Powers, who died in a helicopter crash in 1977, was held as a captive until 1962 and posthumously received the Silver Star in 2012. 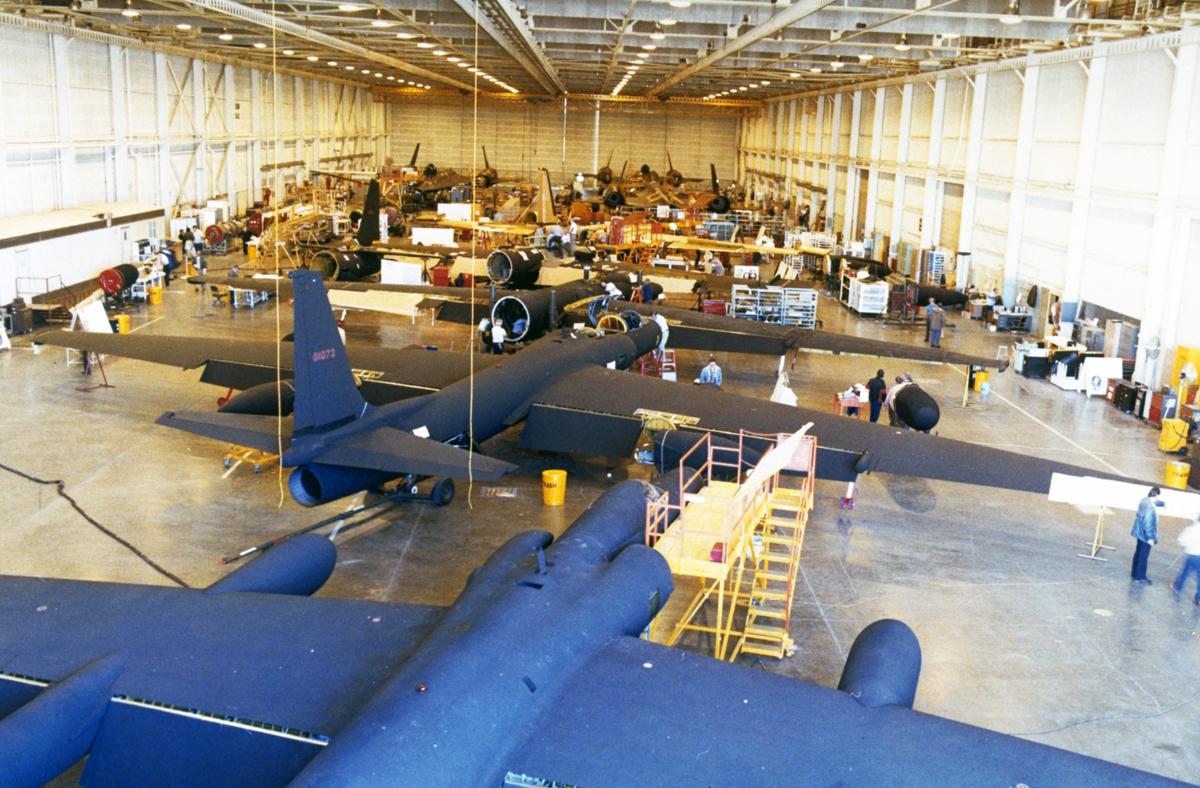 Lockheed restarted production of the U-2 in Palmdale in 1979. A total of 37 additional aircraft were built, including three two-seat trainers. Structurally identical to the earlier U-2R, the newer model, designated TR-1 (Tactical Reconnaissance), was equipped with an updated sensor suite for its revised role. In 1990s the aircraft were redesignated as U-2Rs. Thirty two aircraft remain in Air Force service, five of which are two-seat trainers. Two former U-2S aircraft are also operated as ER-2 research platforms by NASA. 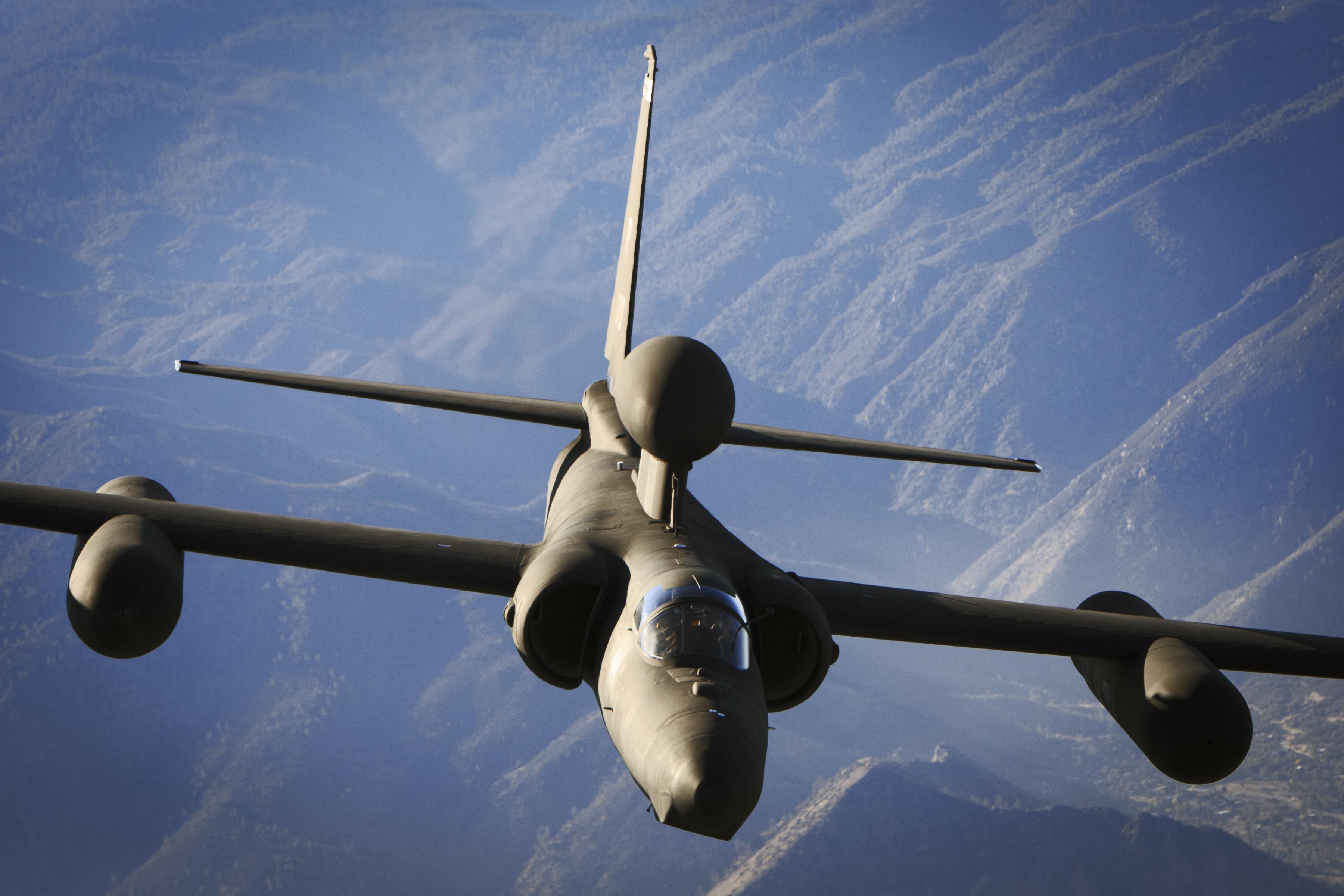 The U-2 has continued to evolve since the last was built in 1989 with changes to the propulsion, environmental control and sensor systems. Between 1994 and 1998 the fleet was re-engined with the General Electric F118-110 turbofan derived from the powerplant used in the B-2A bomber and later F-16 fighter. Weight savings created by the F118 enabled increased time on station and the ability to carry sensors for multiple missions on a single flight. The engine also provided additional electric power generation capacity which allowed several further upgrades.  These included the Raytheon Remote Airborne Sensor (RAS-1R), a radio frequency SIGINT sensor which was added in 2001, followed by a move to the Block 20 glass cockpit in 2003. Other upgrades include the ALQ-221 combined radar warning receiver/ electronic countermeasure system and the nose-mounted ASARS synthetic aperture radar system, known as ASARS. The fleet has also received the Dual Data Link 2 system and the Senior Year Electro-Optical Reconnaissance System (SYERS) multispectral imaging sensor. The U-2 will also be upgraded with the latest ASARS-2B version to compliment the addition of the upgraded SYERS-2C electro-optical reconnaissance system.  A radio frequency signals intelligence suite, the ASQ-230, was also added in 2008, and most recently the U-2 also successfully tested an Open Mission Sytems (OMS)-compliant interface with ISR, electronic warfare and communications gateways.

Sixty five years after Lockheed Martin Skunk Works began the modern era of high altitude spy planes with the creation of the U-2, we take a look back at some of the key events in the Dragon Lady's history.

1 Comment
skywayparkblue
Fri, 12/18/2020 - 00:52
There are really two distinct airframes involved -- the airframe currently being flown dates back 43 years. It is much larger than the true U-2, long since retired.
Bernard Biales