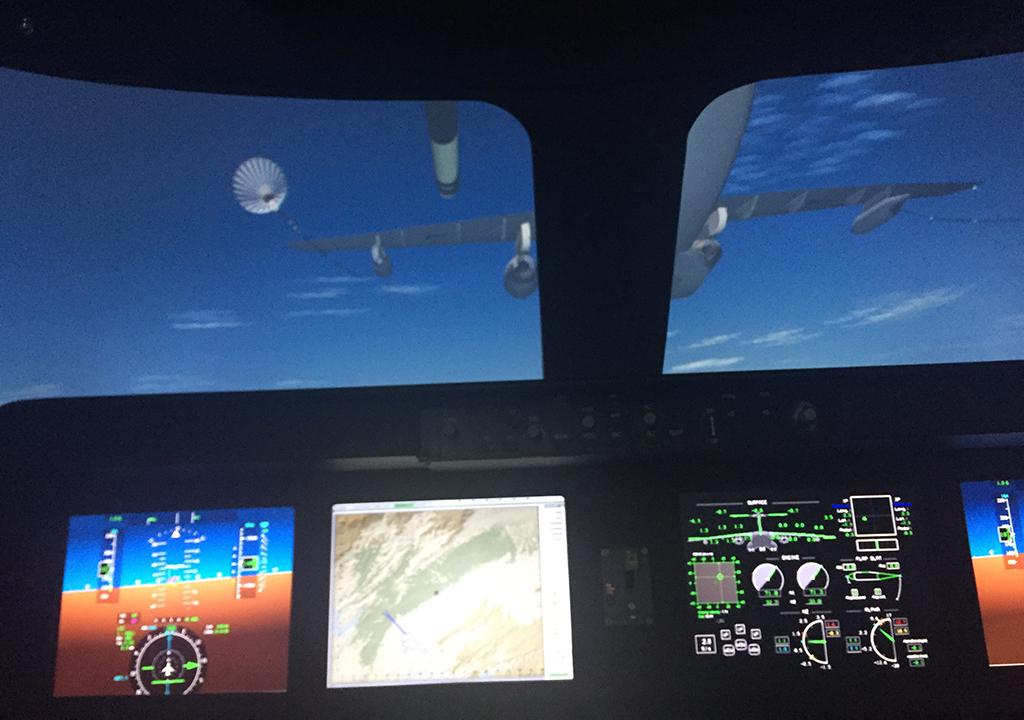 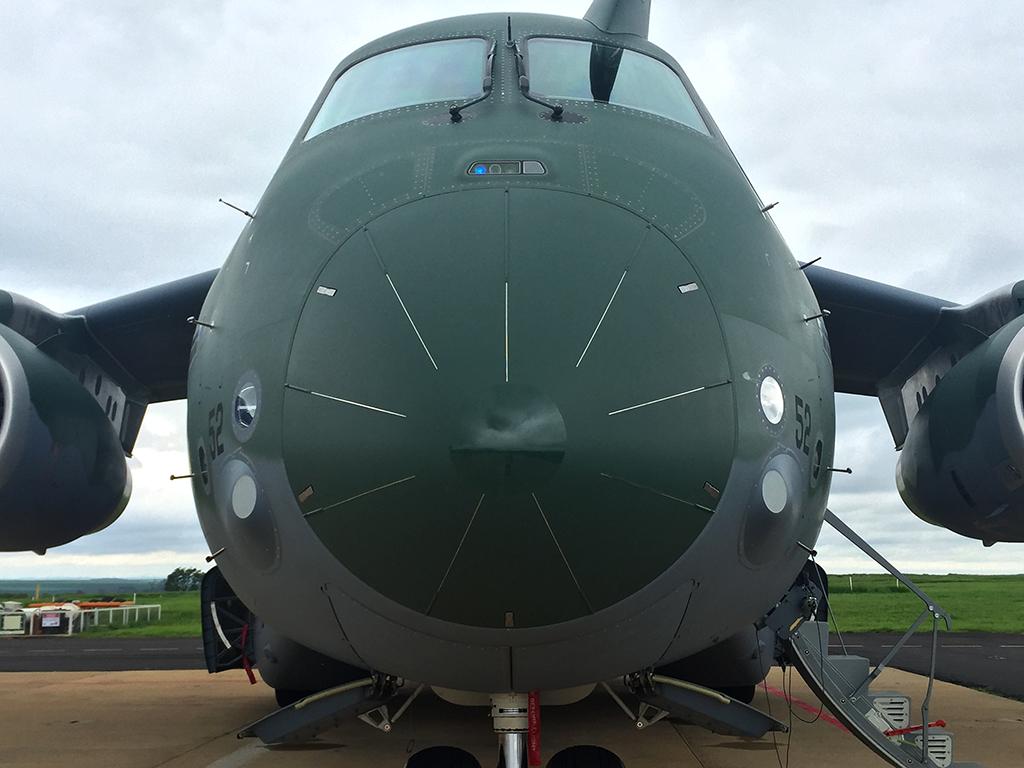 The KC-390’s imposing nose section and pronounced wing anhedral are evident in this view taken during the preflight walk-around on the ramp at Gavaio Peixoto. 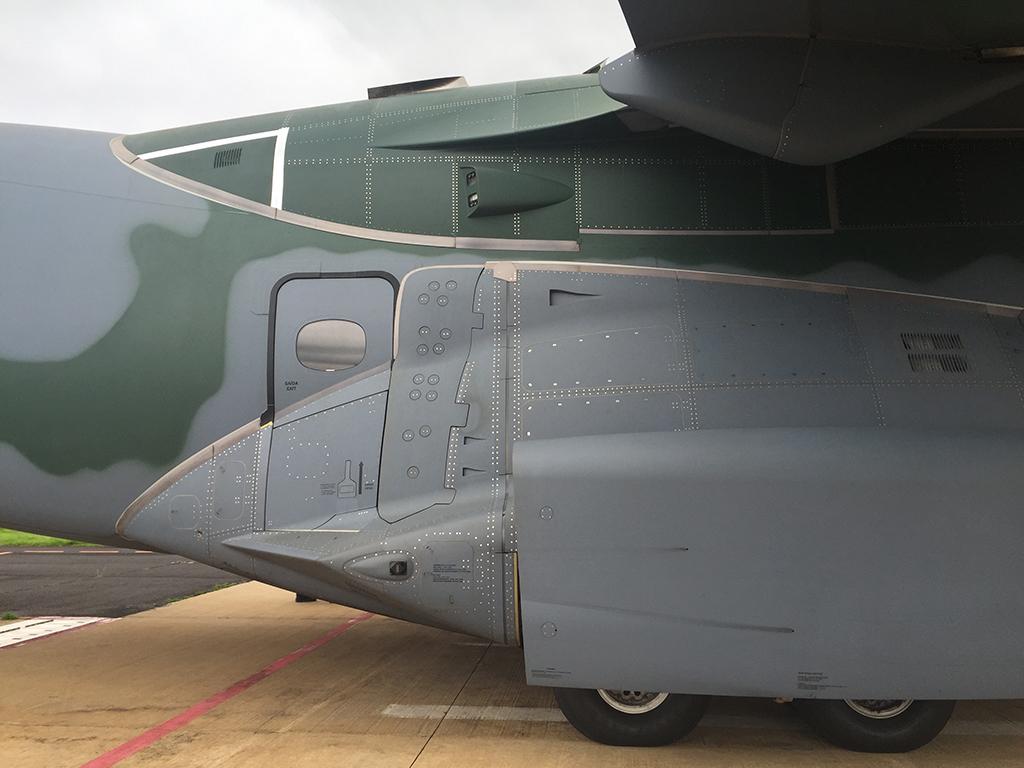 The KC-390 can carry up to 80 soldiers or 66 paratroopers with full gear; the latter group can jump from the ramp or from two doors located behind the wings. To provide a more stable jump position for paratroopers, deflectors next to the doors unfold into the airflow. 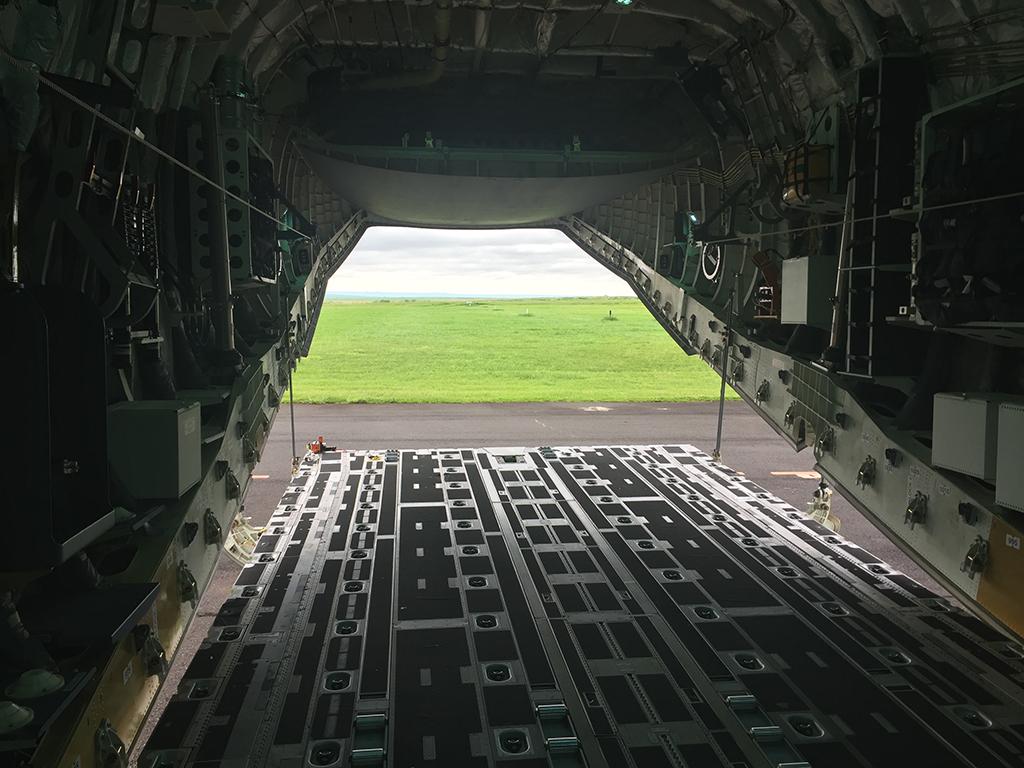 The surprisingly large interior is 3.45 m (11.3 ft.) wide over its entire length and has a minimum height of 2.95 m over a length of 18.5 m, including the ramp that stores two of the seven standard pallets. Its floor sits 1.24 m above the ground to allow easy roll-on/roll-off loading via the lowered ramp. 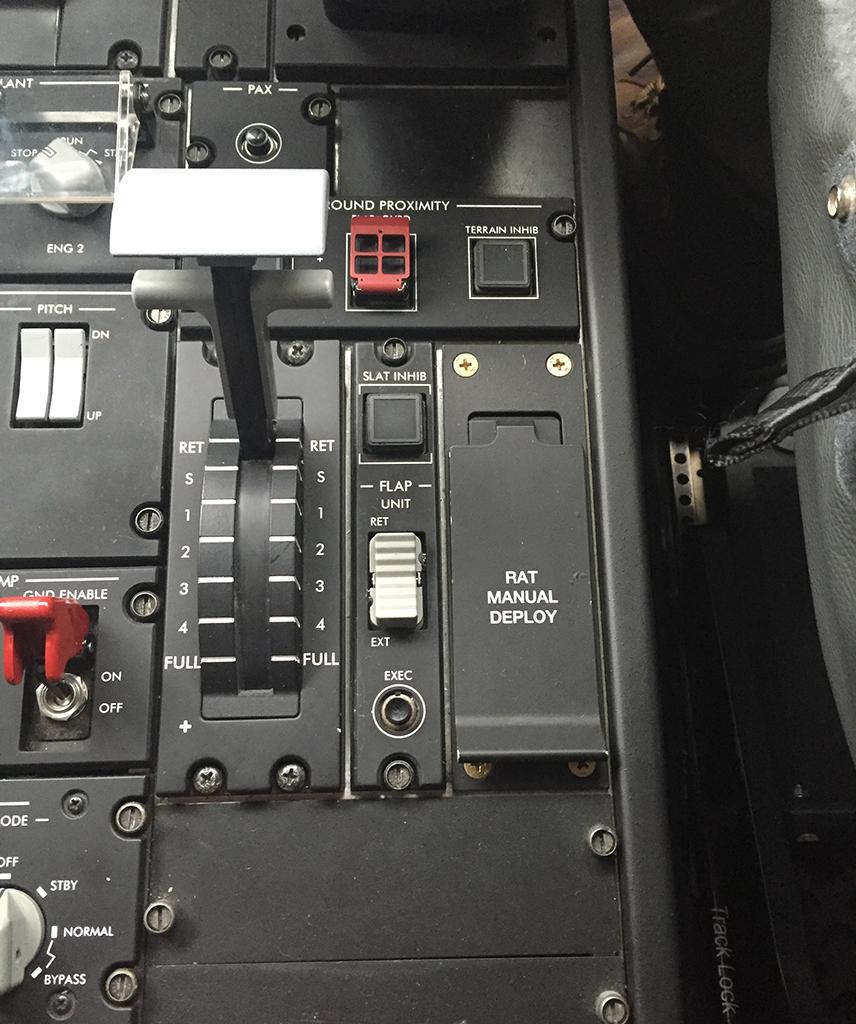 A distinctive feature of the KC-390 is the variable flap system, which enables use of slats-only, flaps-only or every combination of flap extension from 1-40 deg. This is done by moving the flap lever to 1, for example, which drives the flaps to 10 deg., then selecting a number between 1-9 on the scale next to the handle and hitting the execute button. Using 3 on the flap-unit scale, the flaps are driven to 13 deg. 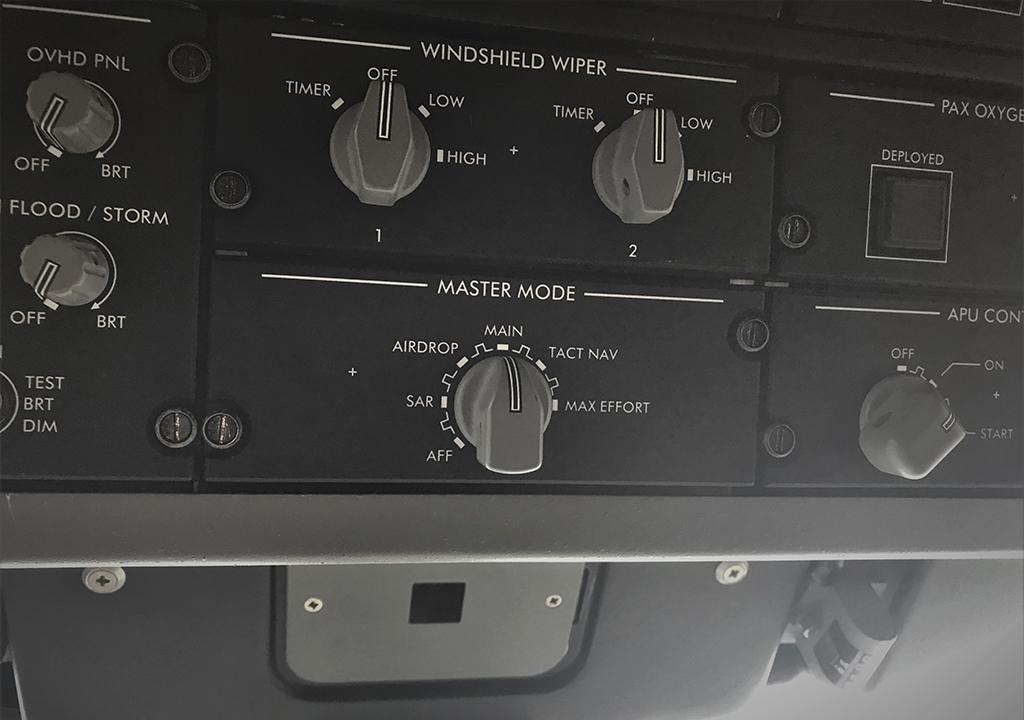 Embraer has tailored the FBW system for specific roles by changing laws for specific missions and allowing varying G-loads, depending on the task and factors such as aircraft weight. Military certification will allow load factors up to 3g. To change FBW capability a master mode switch on the overhead panel can be changed to Main, Max Effort, Tactical Nav, Airdrop, SAR (search and rescue) and AFF (aerial firefighting). 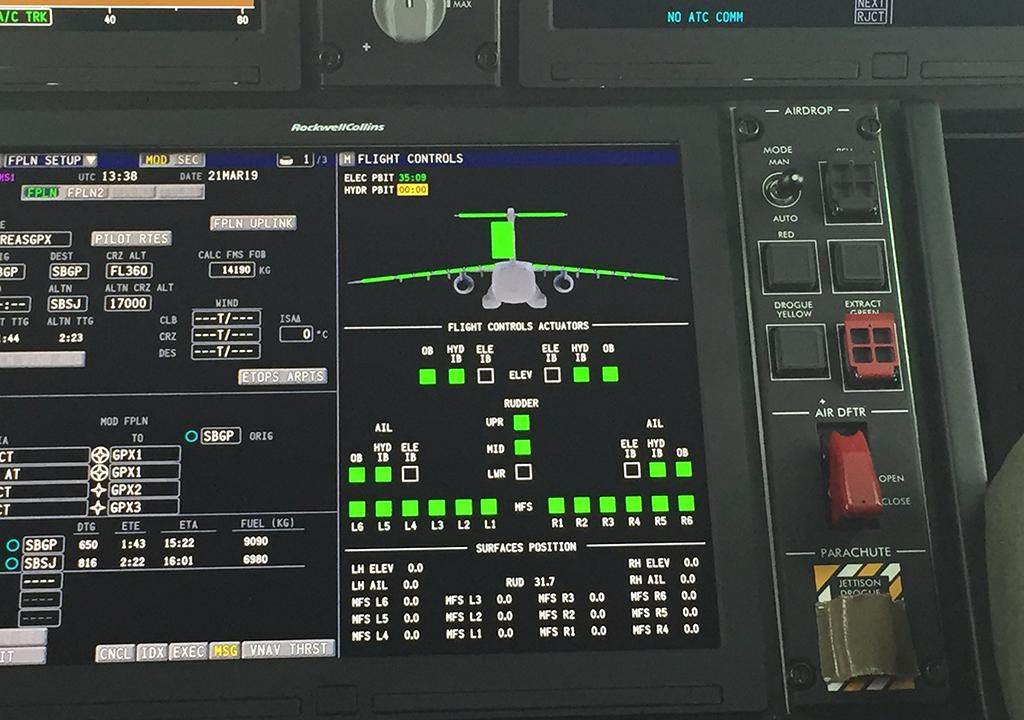 The flight deck is configured with Rockwell Collins Pro Line Fusion 15.1-in. displays, one of which is pictured indicating the positions of the flight control surfaces. 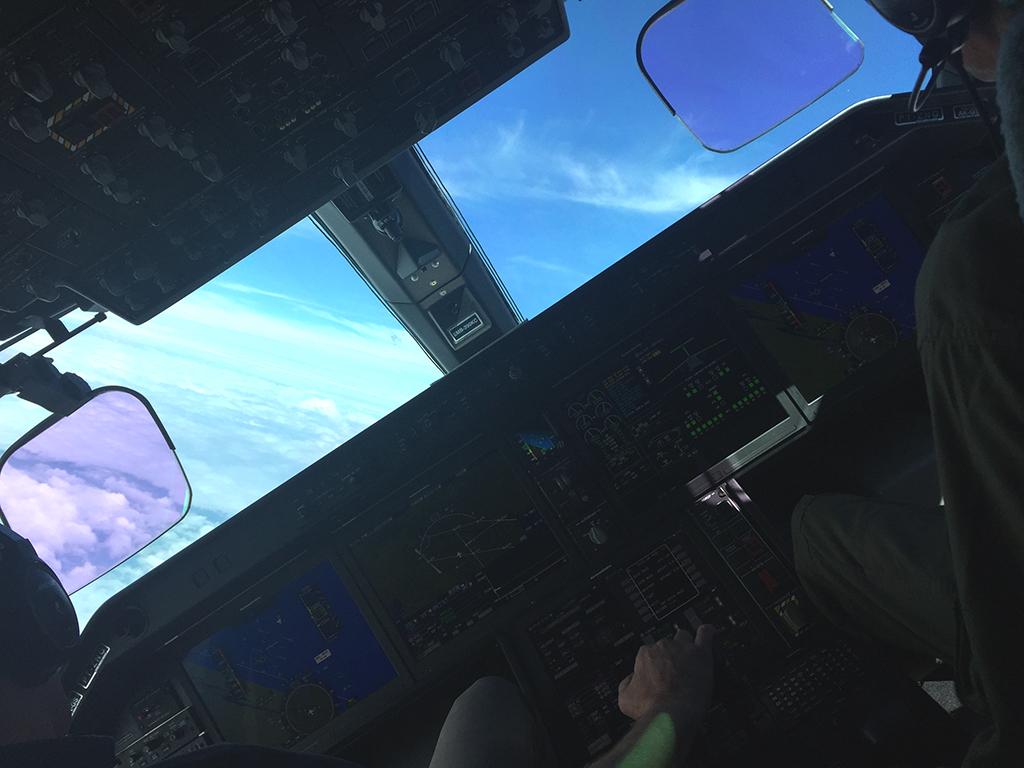 Moving the sidestick a few degrees, Wuerfel turned the aircraft at the maximum permissible rate of 20 deg./sec. This increases to 30 deg./sec above Mach 0.7, as the higher dynamic pressure translates into a higher rate and the aircraft is not limited by loads during maneuvers. 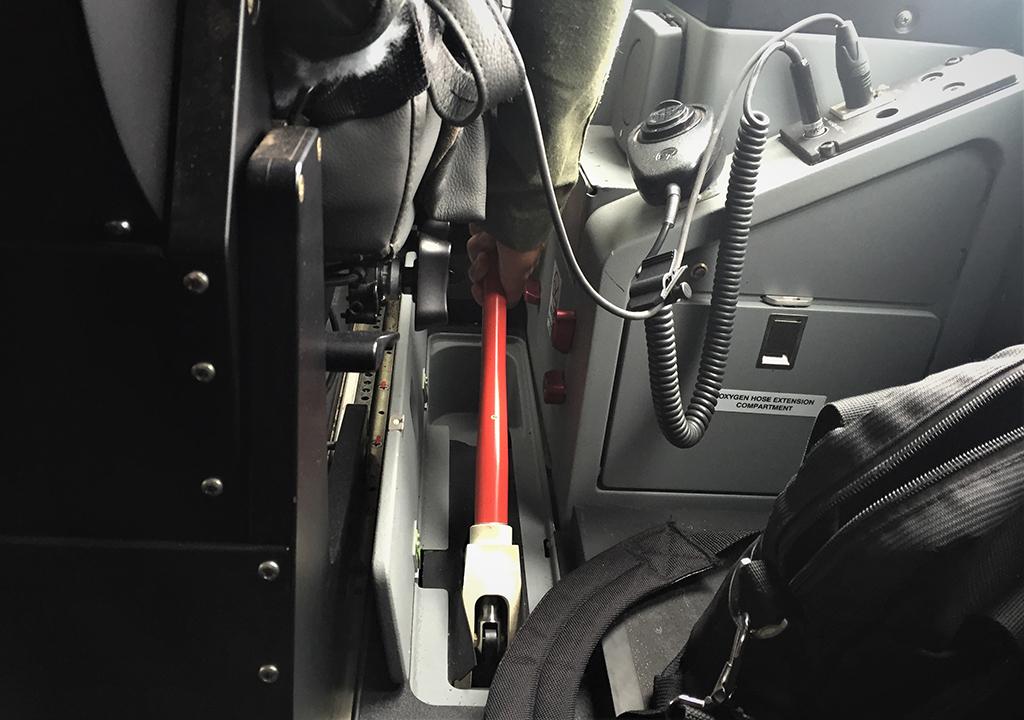 The loss of the left hydraulic system provided an unexpected opportunity to demonstrate alternative systems, such as the free-fall landing-gear release handle—seen here being pulled up by Souza. 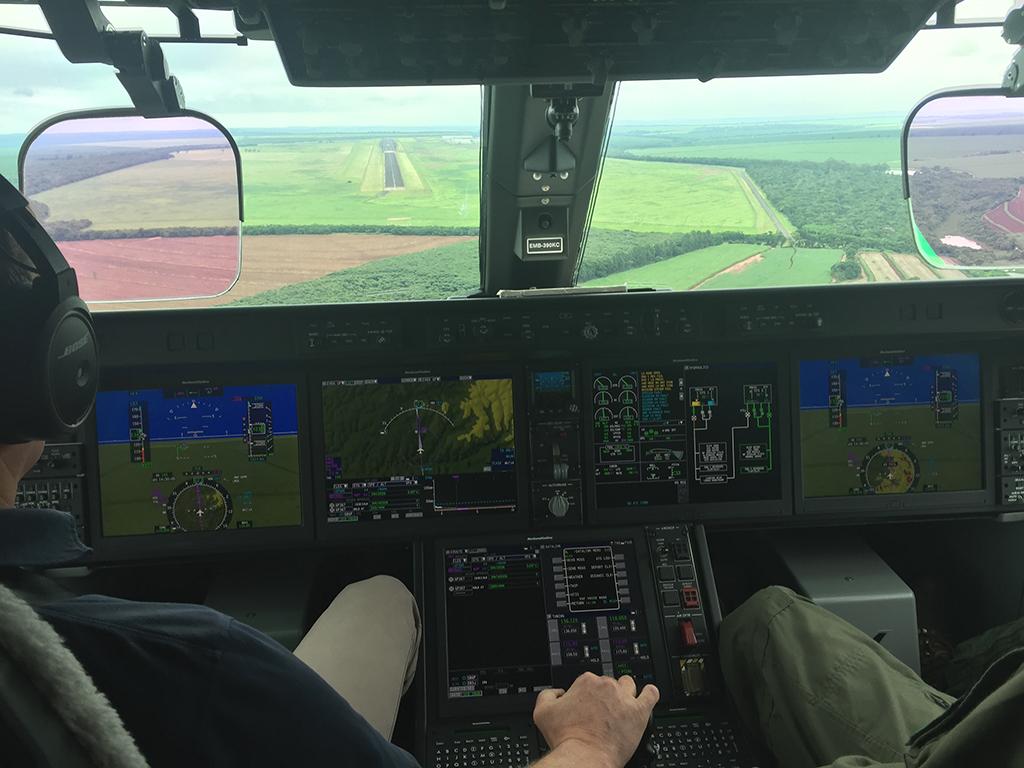 With flaps set and gear down, the KC-390 approaches the extended overrun section of Gaviao Peixoto’s 16,295-ft.-long Runway 2/20—the fifth longest in the world.

Aviation Week’s KC-390 flight test began with a demonstration of the aircraft’s spritely takeoff and climb performance. Rotation speed for takeoff was 121 kt., with a targeted initial climb angle of 11 deg.:

Approach and landing of the KC-390 was toward the north, with touchdown on the extended overrun section of Gaviao Peixoto’s extremely long Runway 2/20: