History-Making U.S. Military Aircraft, From The B-29 To B-1B 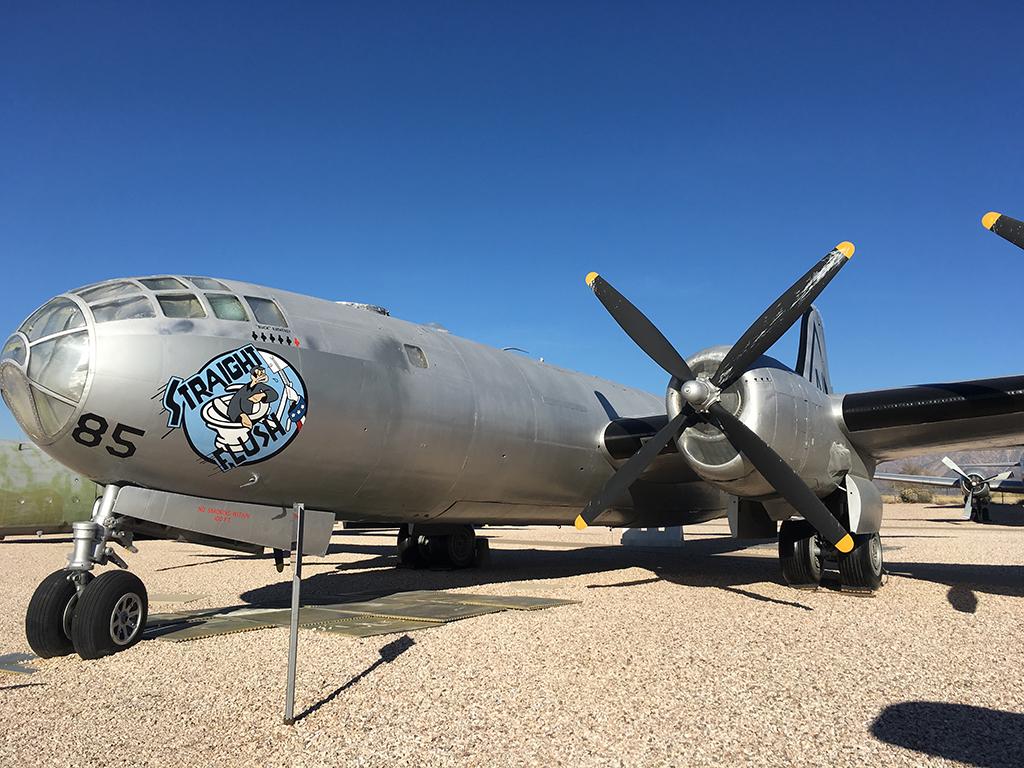 Boeing’s B-29 “Superfortress” became one of the most well-known aircraft in August 1945 when the Enola Gay and Bockscar dropped the world’s first two atomic bombs on Hiroshima and Nagasaki, Japan. On Aug. 6, 1945, Capt. Claude Eatherly flew reconnaissance in the Straight Flush (pictured) over Japan and determined the weather was clear for the Enola Gay to drop the bomb on Hiroshima. The B-29s served from 1944-60. 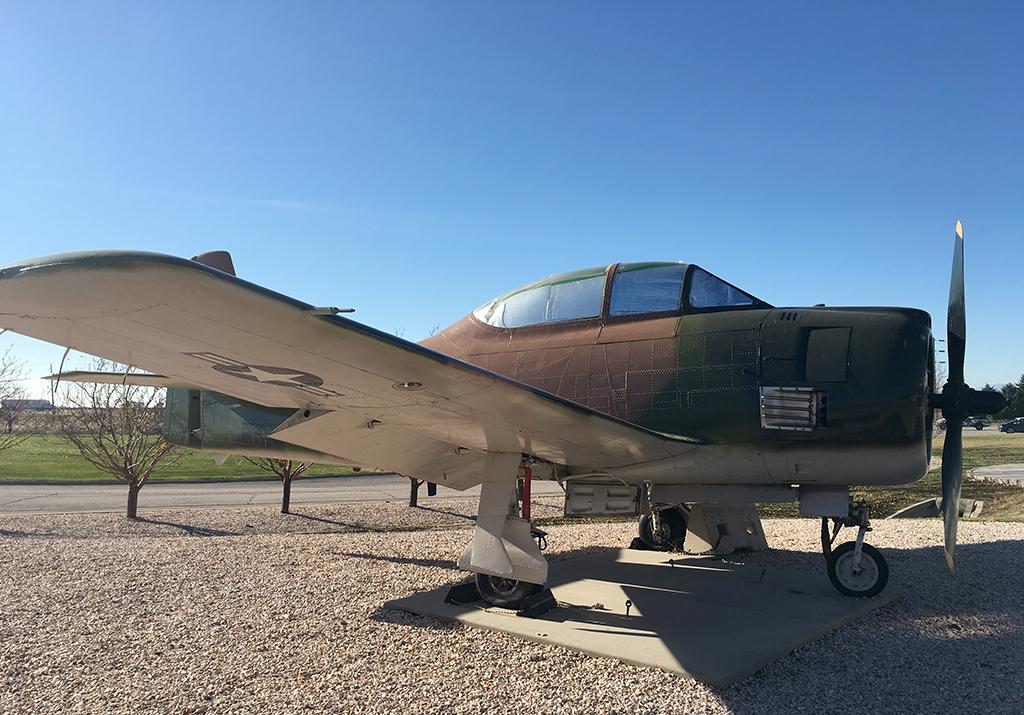 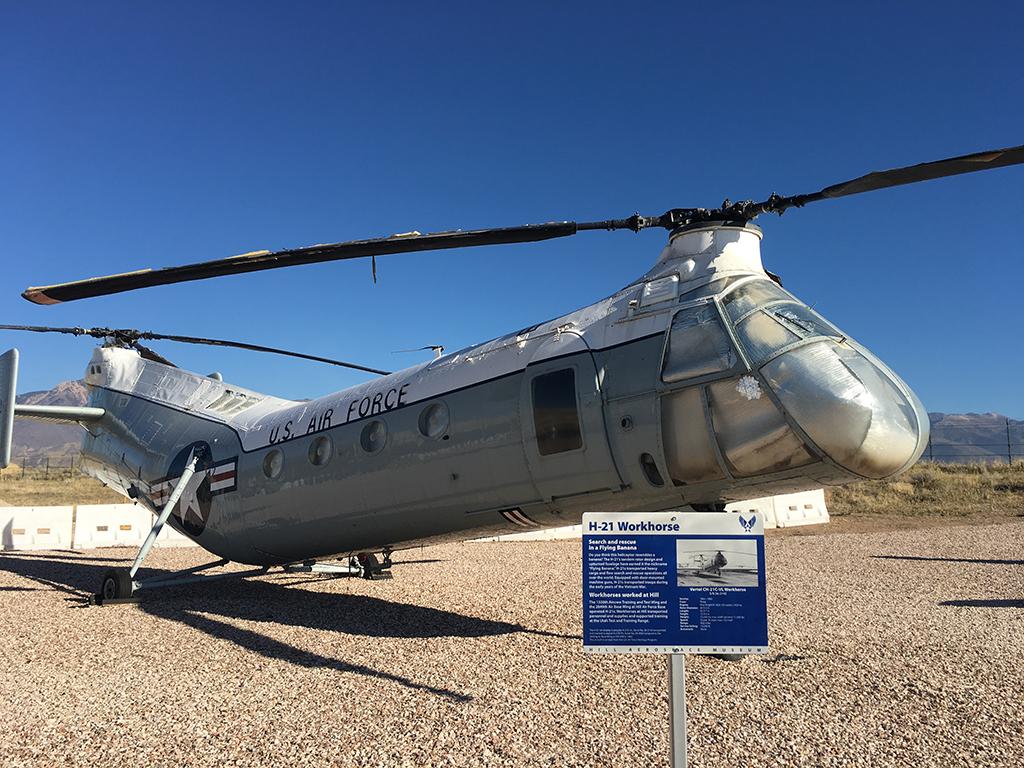 Vertol’s CH-21C “Workhorse” transported heavy cargo and flew search-and-rescue operations all over the world from 1952-65. Equipped with door-mounted machine guns, H-21s transported troops during the early years of the Vietnam War. The tandem rotor design and upturned fuselage earned the nickname “flying banana.” 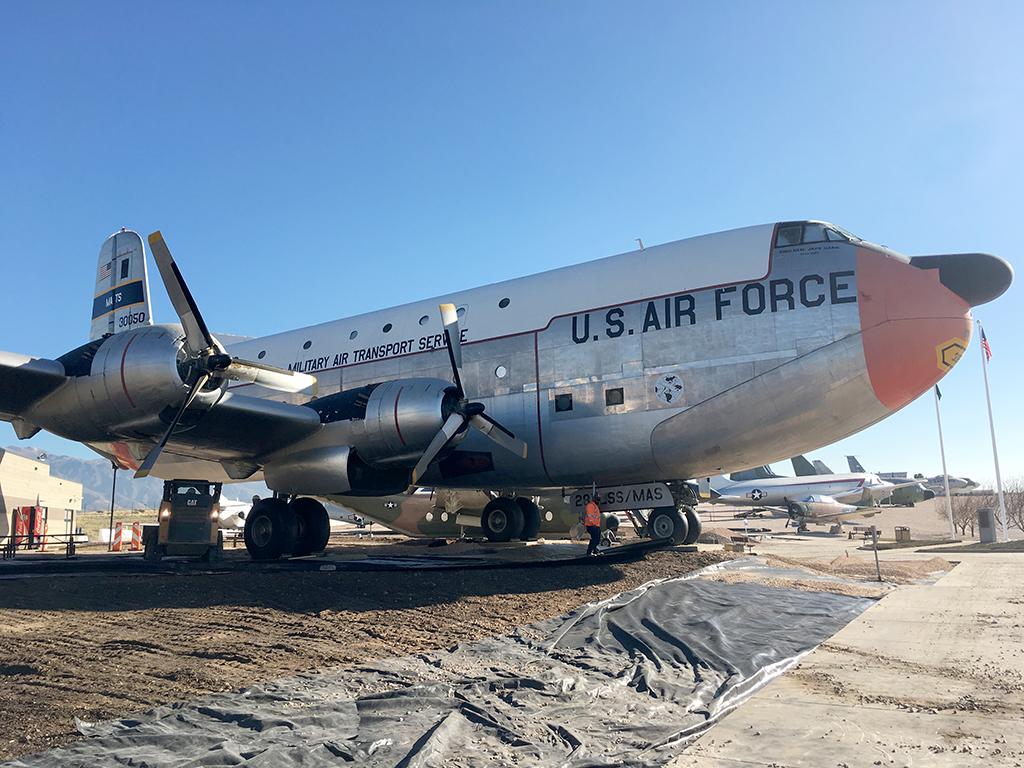 The Douglas C-124 “Globemaster II” flew global airlift missions from 1950-74, hauling critical supplies from the U.S. to Southeast Asia throughout the Vietnam War. Its double-decker cabin accommodated 200 troops, and its clamshell doors, hydraulic ramp in the nose and elevator under the fuselage allowed Globemasters to transport large cargo items such as tanks. 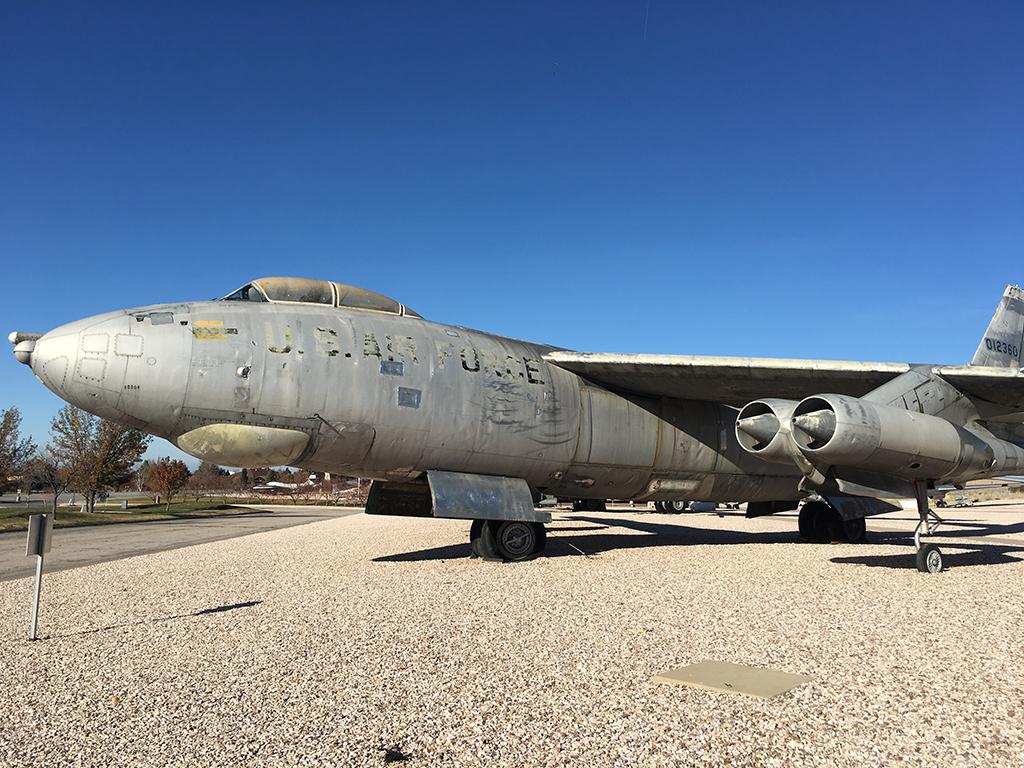 Boeing’s B-47 “Stratojet” boasted some of the major technological innovations of the early Cold War, including powerful jet engines, swept wings, wing slats and vertical stabilizers. The B-47’s mission, though never necessary, was to drop nuclear bombs on the Soviet Union. It was armed with two M-24 20-mm cannons in its tail turret and could carry up to 25,000 lb. of nuclear or conventional bombs. It flew from 1951-77. 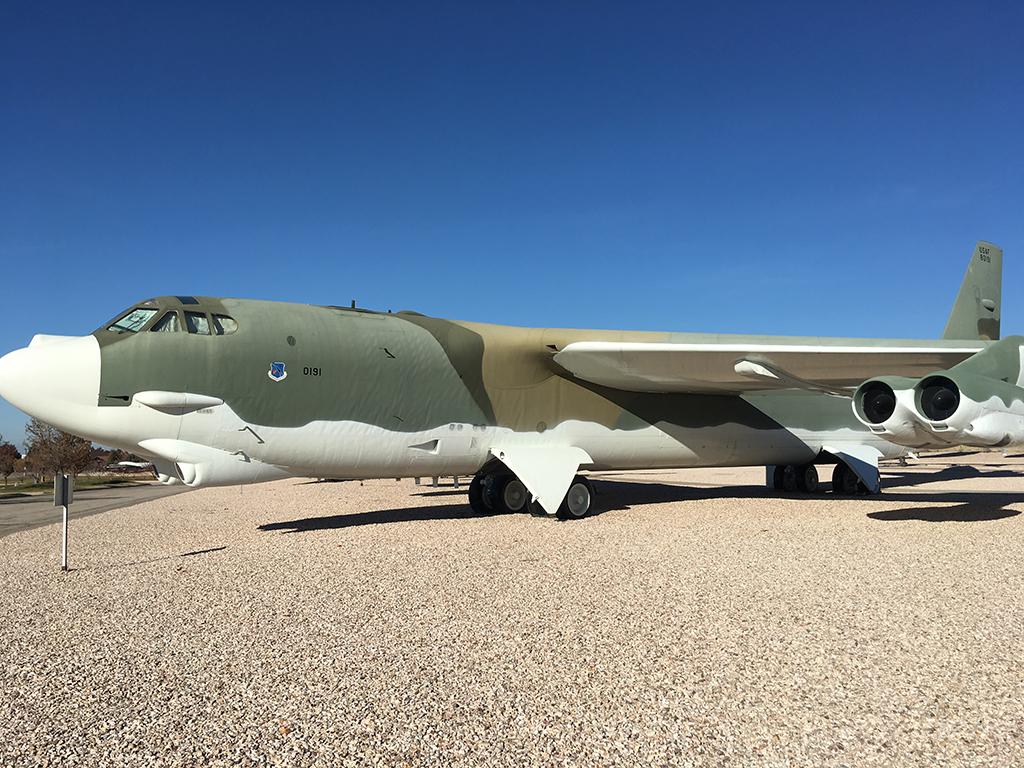 Boeing’s B -52 “Stratofortress” is a long-range, heavy bomber that can carry up to 50,000 lb. of bombs and missiles. The B-52 was the first bomber to carry Air-Launched Cruise Missiles, allowing the U.S. to launch bombs farther from the targets. The aircraft first flew in 1952 and is still flying critical missions in the Middle East today. It is estimated to remain in the Air Force fleet until 2040. 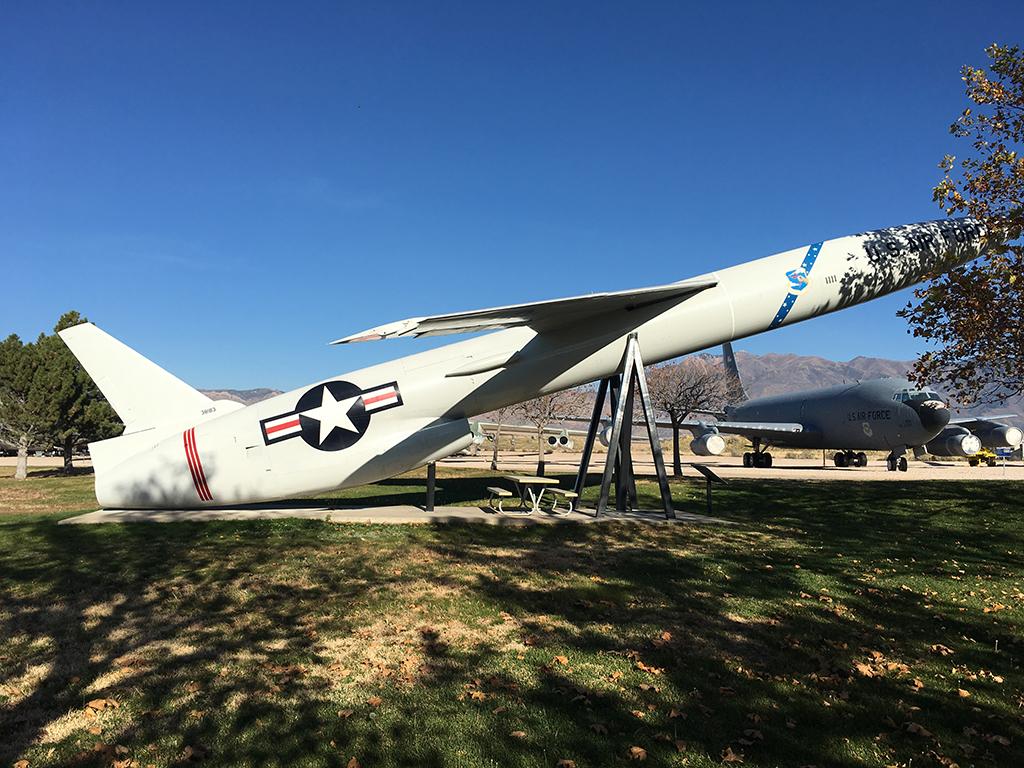 Northrop’s SM-62 “Snark” missile was an air-breathing, ground-launched intercontinental missile that could carry a W29 thermonuclear warhead. The Snark was designed to be fired from a short mobile launcher using two Aerojet General solid-fuel booster rockets, each with 130,000 lb. of thrust. It next switched to an internal Pratt and Whitney J57 turbojet engine for the rest of its flight.

The Snark was developed to present a nuclear deterrent to the Soviet Union and other potential enemies at a time when intercontinental ballistic missiles (ICBM) were still in development but was rendered obsolete when ICBMs were first deployed.  Air Force Strategic Command used the Snark from 1958-61. 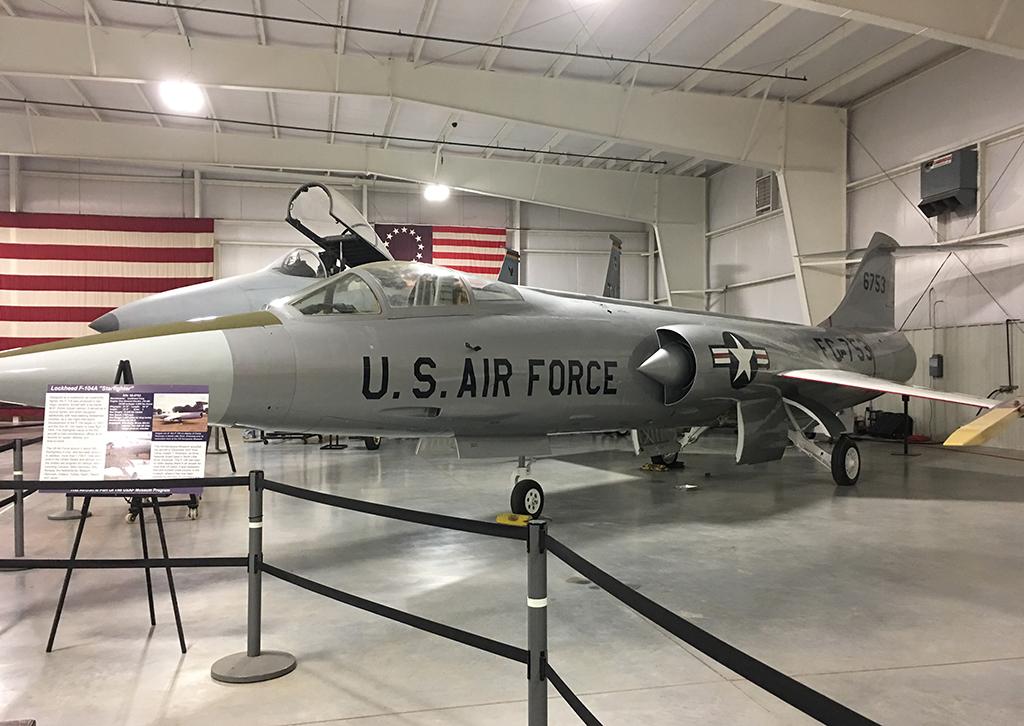 Lockheed’s F-104 “Starfighter” was designed as a supersonic air superiority fighter, armed with a six-barrel M-61 20-mm Vulcan cannon as well as heat-seeking Sidewinder missiles, and it was the first U.S. jet fighter in service to fly at Mach 2. The F-104 served with the U.S. Air Force from 1958-69 and continued with Air National Guard units until 1975. NASA flew a small mixed fleet of F-104 types in supersonic flight tests and spaceflight programs until 1994. 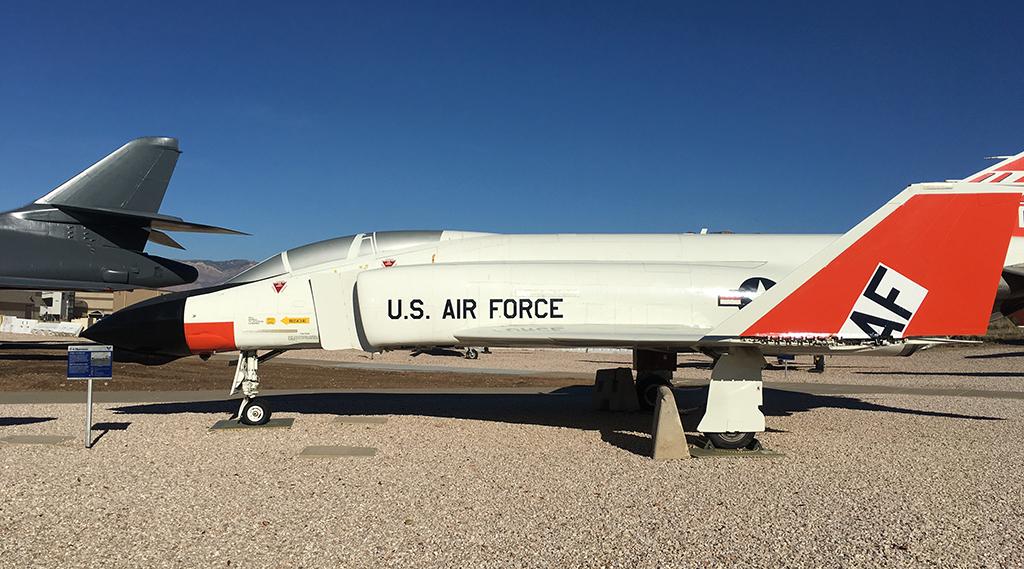 McDonnell Douglas’s F-4 “Phantom” was an all-weather tactical fighter-bomber that flew from 1963-96. In 1965, the Air Force sent its first F-4s to Southeast Asia, where they flew air-to-air missions against North Vietnamese fighters as well as attacking ground targets. The Phantom was the first multiservice aircraft, flying concurrently with the U.S. Navy, Air Force and Marine Corps—much like Lockheed Martin’s F-35 does today. 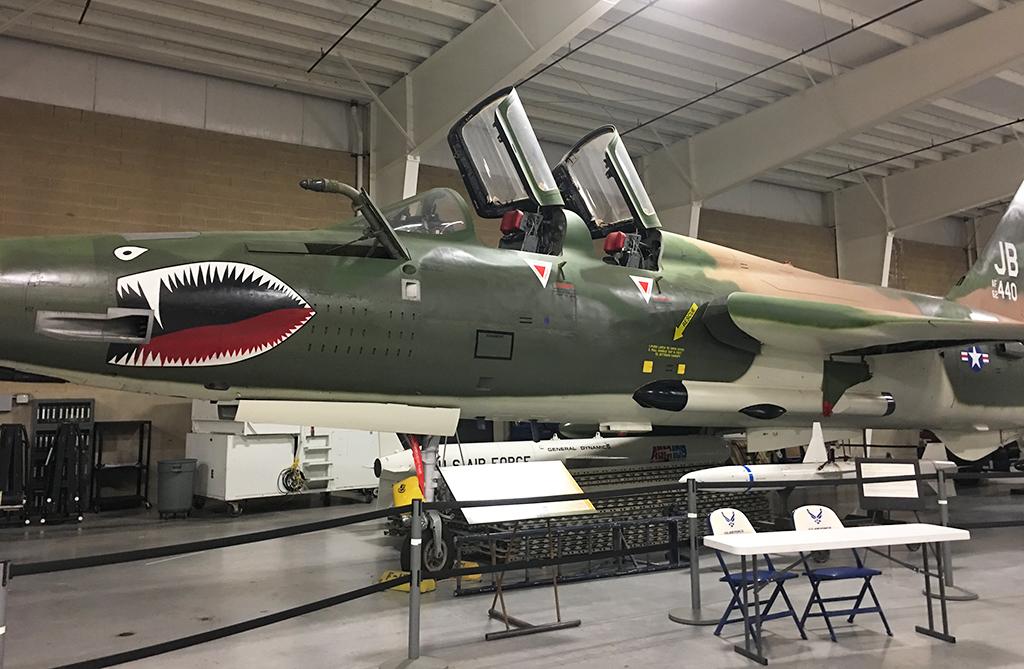 The Republic F-105 “Thunderchief” was a supersonic fighter-bomber that conducted the majority  of strike bombing missions during the early years of the Vietnam War. Starting in 1967, 61 F-105Fs were modified to an EF-105F configuration (pictured), later redesignated as F-105G, for the “Wild Weasel” mission to seek out and destroy North Vietnamese surface-to-air missile sites. The F-105Gs were modified with advanced avionics and additional electronic countermeasures equipment, including the Westinghouse AN/ALQ-105 jamming transmitters, and the AN/ALR-31 Radar Homing and Warning System. The F-105G was replaced by the F-4G in 1980.

Lockheed Martin’s SR-71 “Blackbird” is a long-range, advanced strategic reconnaissance aircraft best known for its world-record speeds. The aircraft can fly Mach 3+, or over 2,000 mph, and is powered by two Pratt & Whitney J58 turbojet engines. Lockheed delivered just 32 SR-71s to the Air Force, with the first entering service in 1966. The Blackbird flew until 1990, when it was retired due to budget cuts and the high cost of operation, but it briefly returned to service from 1995 to 1997-98 when it was retired again. The Blackbird flew reconnaissance missions for the Air Force, including daily sorties toward the end of the Vietnam War. The Air Force also loaned the aircraft to NASA to perform various high-speed and high-altitude research tests.

The SR-71 pictured was the last one to be manufactured and the only C model of the 32 aircraft from Lockheed, according to the museum. Nicknamed “The Bastard,” this SR-71 is a hybrid comprised of the rear fuselage of the first YF-12A and a functional engineering mockup of an SR-71A forward fuselage built for static testing. The aircraft flew from 1970 to June 1976, retiring after just over 550 flying hours. 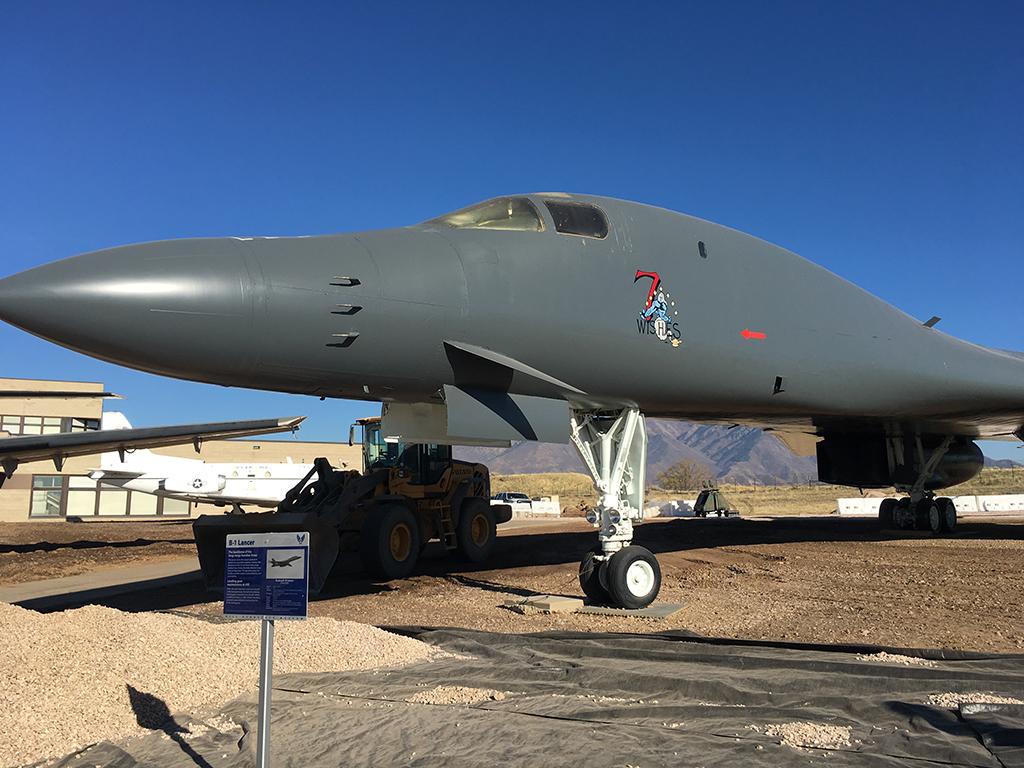 Rockwell’s B-1B Lancer is a long-range, multimission conventional bomber that entered service in 1986 and is still flying missions for the Air Force today. It was initially meant to be a nuclear bomber but was converted to conventional bombing use in the early 1990s following the Gulf War. The four-engine, supersonic variable-sweep wing, jet-powered strategic bomber was used heavily during the Operation Enduring Freedom campaign against Islamic State terrorists in Iraq and Syria.

From the B-29 Superfortress that dropped the first two atomic bombs in 1945 to the SR-71 Blackbird that set records flying more than three times the speed of sound, U.S. military aircraft have been breaking ground and making history for almost a century. Aviation Week recently visited Hill Aerospace Museum at Hill AFB, Utah, which houses one of the finest collections of decommissioned U.S. military aircraft.