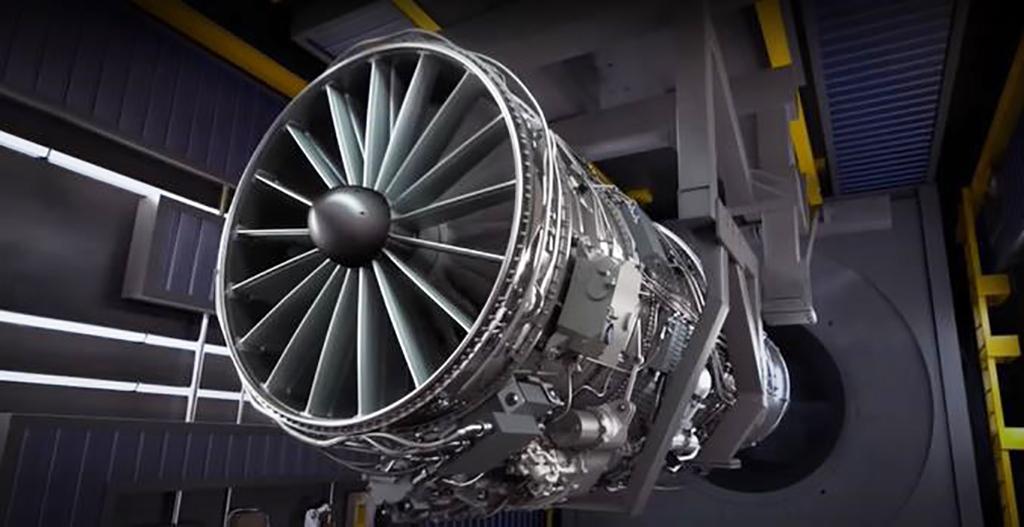 Variable-cycle engines (VCE) are not new, and adaptive propulsion systems have already been developed and flown. Among the most significant of these are Pratt & Whitney’s J58 (JT11D-20) on the Lockheed SR-71, which transformed from a turbojet into a turbo-ramjet for the Blackbird’s Mach 3 mission. GE also developed the XF/YF120 VCE, which formed the basis for its unsuccessful bid for the Advanced Tactical Fighter contest of the 1980s and 1990s. So what new technology can help the XA100/101 succeed when previous attempts—most notably the YF120—did not? The quick answer is that the modern adaptive engines go beyond previous VCE concepts by adding a third airflow stream, which, along with the normal fan bypass, can be dynamically modulated to provide either better efficiency for extra range or more thrust for combat, depending on the need. Credit: GE Aviation 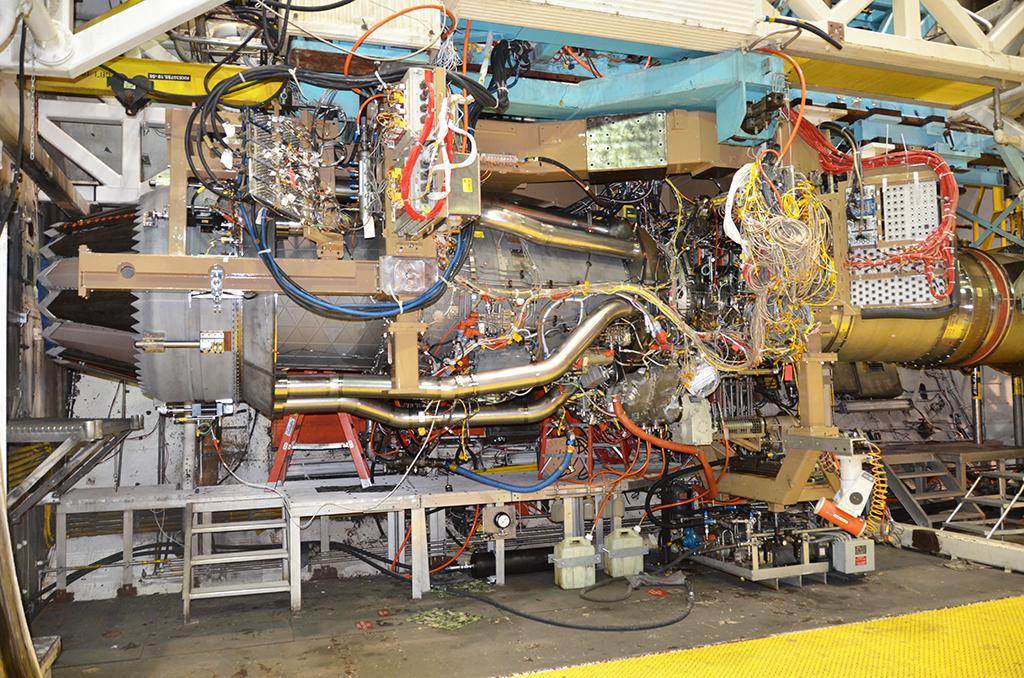 Pratt & Whitney tested an adaptive fan on an F135 in preparation for the development of the XA101. The third stream can be redirected to provide 10% increased thrust during combat or more than 25% better fuel efficiency during cruise conditions compared with a 2015 state-of-the-art fighter engine. Crucially, the third stream will provide extra cooling air for thermal management—an important capability as heat-rejection requirements increase for more powerful electronics and energy weapons. Credit: U.S. Air Force 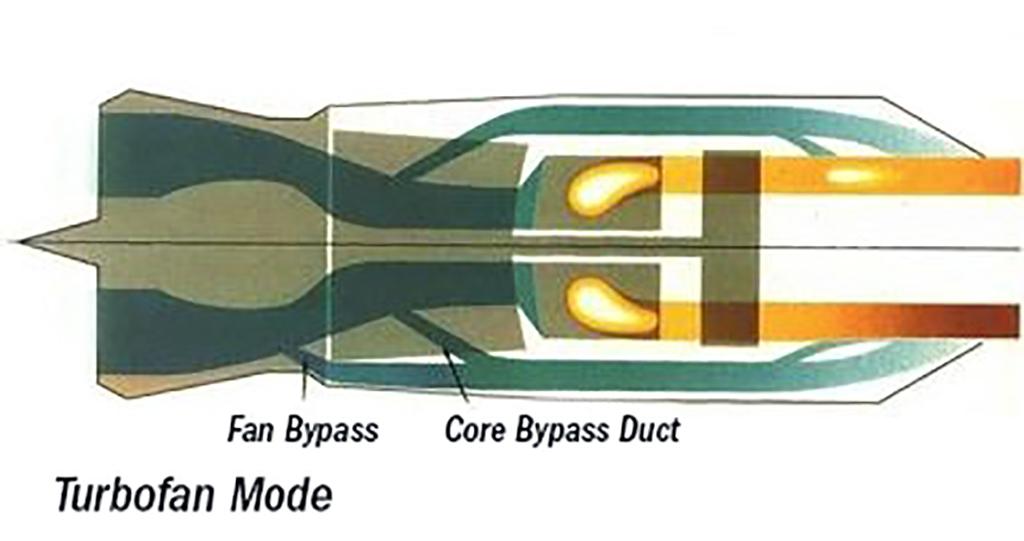 GE Aviation’s X/YF120 VCE concept: turbojet above the line and turbofan below. The original GE XF120, also known as the GE37, employed a double-bypass approach to vary the cycle. The key components of the system included fan bypass doors and core bypass ducts as well as a variable-area bypass injector (VABI) aft of the low-pressure turbine. When the engine was operating in turbofan mode, both the fan and core bypass were open and the VABI was closed. The injector, which helped match the fan-to-core pressure, provided cooling air to the exhaust liner. When the engine was in turbojet mode, the fan bypass door was closed, and a smaller amount of air was discharged into the bypass through the core bypass duct. The fan supercharged the engine core and the VABI—located upstream of the afterburner—was opened to reinject the remaining bypass stream into the throat of the exhaust. Credit: GE Aviation 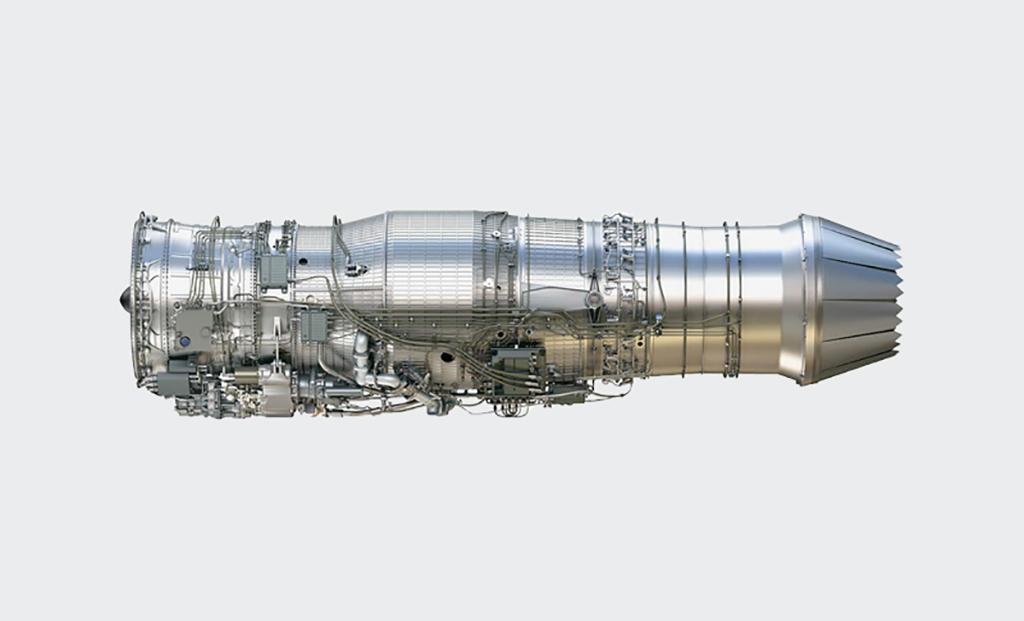 Adaptive-cycle engines enclose an additional third stream. Although details remain sparse about the operating cycles of the new-generation adaptive engines, the key difference is the addition of the third air stream, which is external to both the core flow and standard bypass duct. Adaptive-inlet devices, working in combination with a variable-area nozzle, modulate the flow in the third stream and in the conventional bypass duct. The combined devices dynamically alter the fan pressure ratio and overall bypass ratio: the two main factors that influence specific fuel consumption and thrust. Credit: GE Aviation 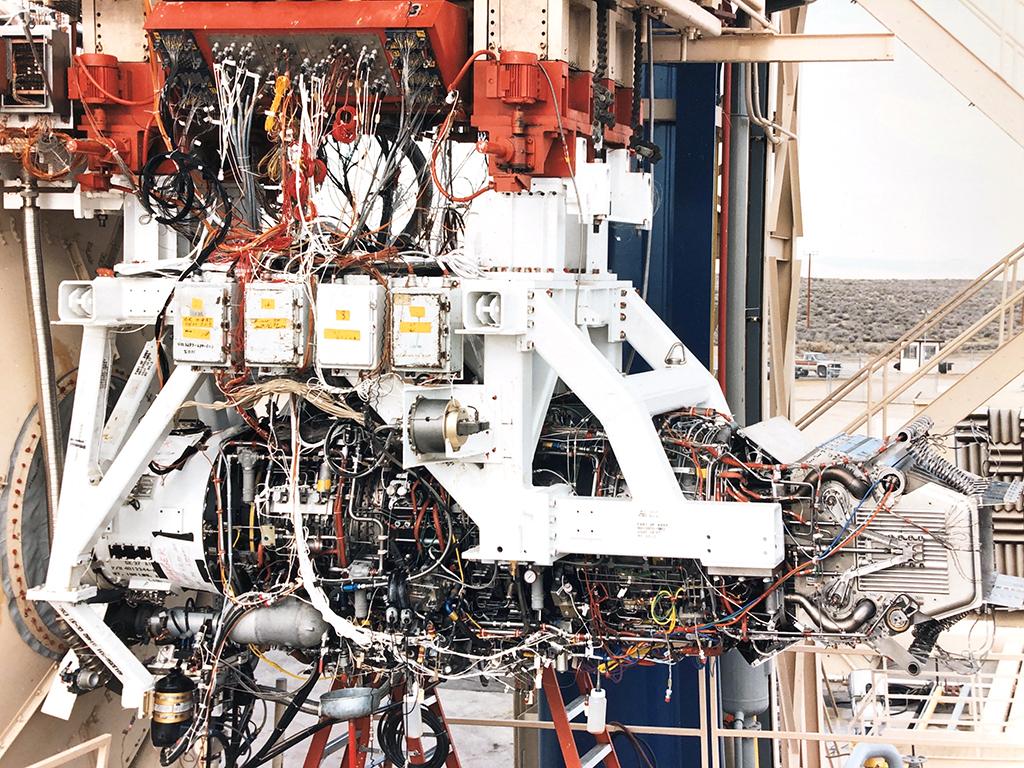 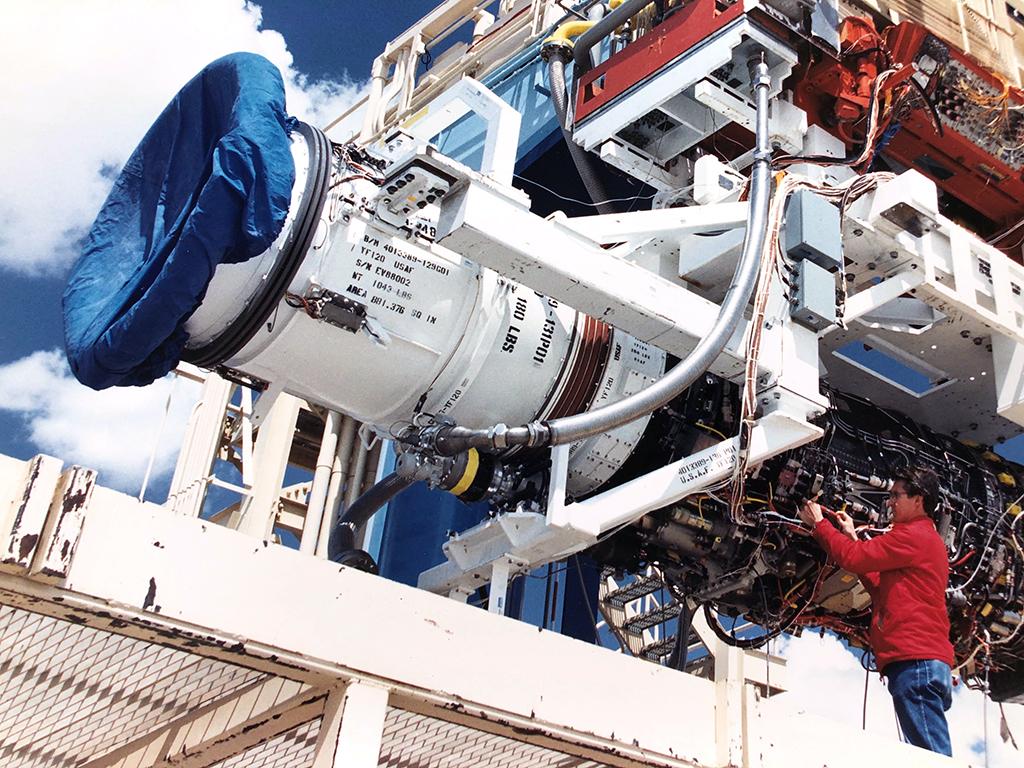 The larger GE Aviation YF120 variant was flown on both the YF-22 and YF-23. GE’s beefed-up YF120 was designed with a 12% larger fan to meet the Advanced Tactical Fighter program’s evolving requirements, which called for 35,000-lb. thrust and a greater emphasis on stealth. The engine first ran in 1989 and included a switch to a metallic exhaust system in place of the carbon-carbon design originally planned. Credit: GE Aviation 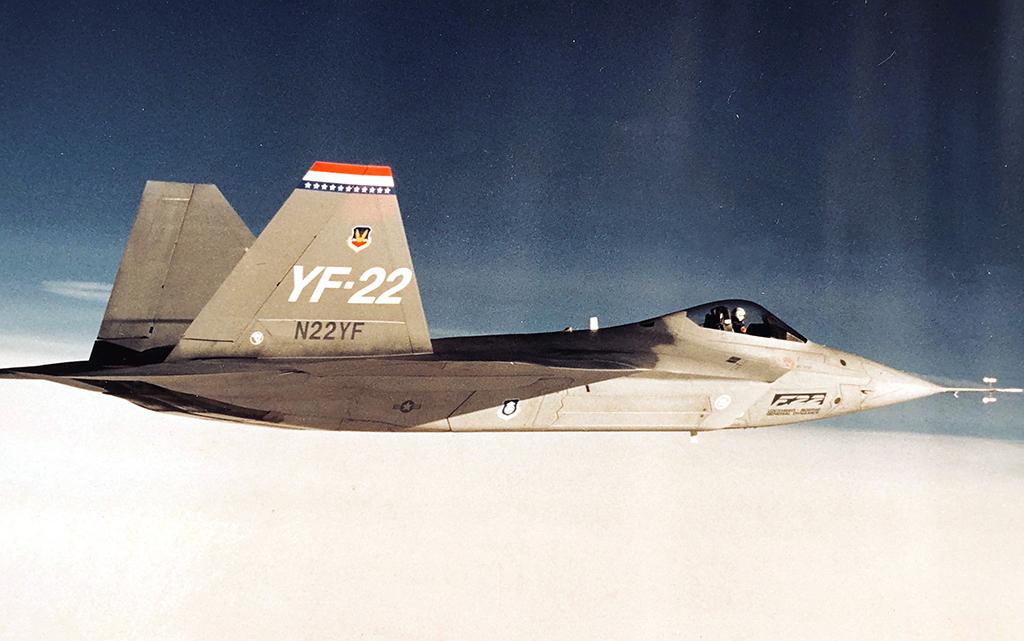 The first YF-22, PAV-1, was powered by the GE YF120 and made its debut flight from Palmdale, California, in September 1990. Credit: Lockheed Martin 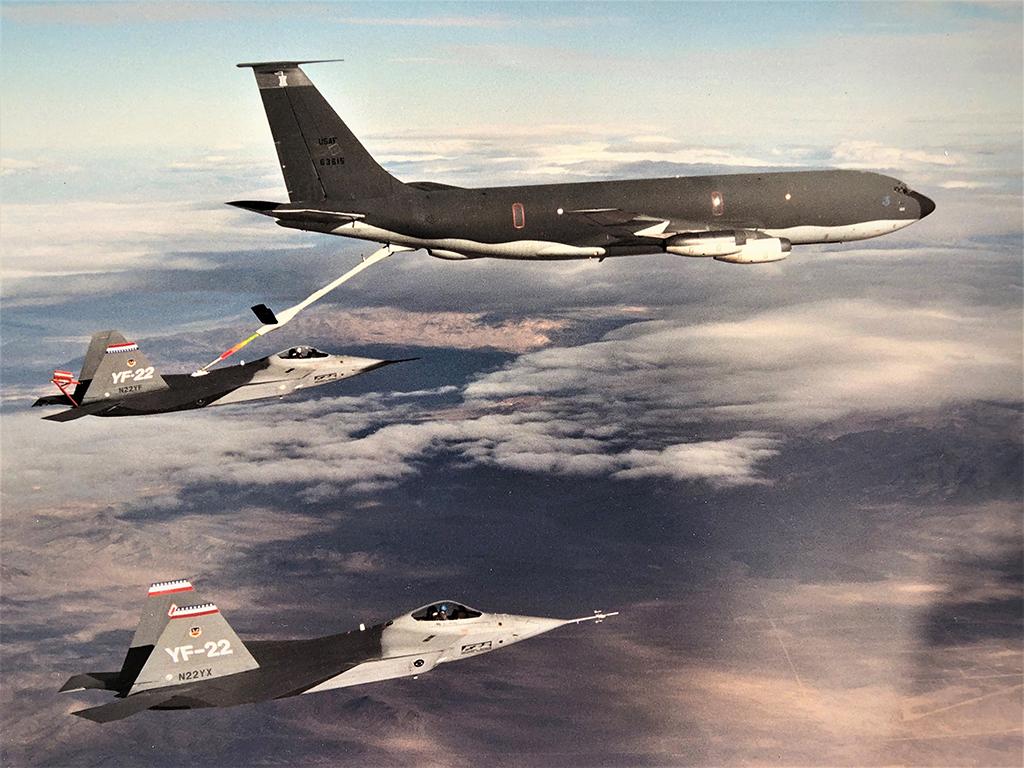 PAV-2—the second YF-22 and the first to be powered by the Pratt & Whitney YF119—waits its turn for fuel, while PAV-1 tanks behind a Boeing KC-135 high over Edwards AFB, California, in January 1991. Credit: Lockheed Martin 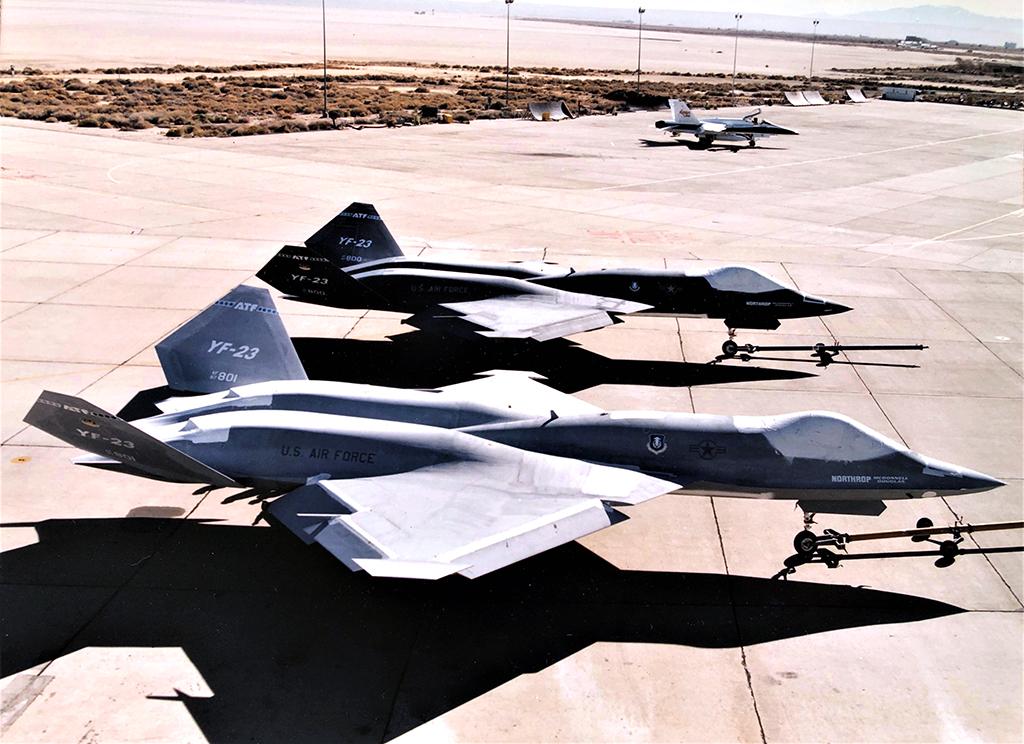 PAV-1, the first of the competing Northrop/McDonnell Douglas YF-23s powered by Pratt & Whitney YF119s, flew in August 1990. A GE YF120-powered aircraft, PAV-2 joined the test program in October 1990. Following the award of the Advanced Tactical Fighter contract to Lockheed in 1991, the two YF-23s were transferred to NASA for a series of proposed strain-gauge load calibration technology tests. These evaluations, however, did not take place, and the airframes were retired to museums. The GE-powered YF-23 outperformed all other engine-airframe combinations in terms of top speed in afterburner and supercruise but was considered too risky to proceed to further development. Credit: NASA

Jet engines that can change or adapt between varying operating cycles in flight represent a potential game changer in air combat capability. The most significant attempt by the U.S. Air Force to introduce this technology is underway with the development and testing of the General Electric XA100 and Pratt & Whitney XA101 adaptive engine demonstrators.

If the tests, which begin in 2021, are successful, they could mark the dawn of a third age of military engine development, providing a new lease on life to the gas turbine in the way that the turbojet, and later the turbofan, revolutionized aviation over the past seven decades.

1 Comment
Registered User
Fri, 10/02/2020 - 03:51
GREAT article Guy. However, I attempted to make a decent copy of the photos...so I can use it in the mentoring and dialog with youngsters and 'oldsters' I do here in the Seattle, WA..... and failed after several hours. So is there someone at Aviation Week that can HELP me obtain clear photos as shown in the article. Please, PLEASE have someone at Aviation Week help me to do that. Thank you, Thank You, THANK YOU. Joel Godston at <jgodston@gmail.com>