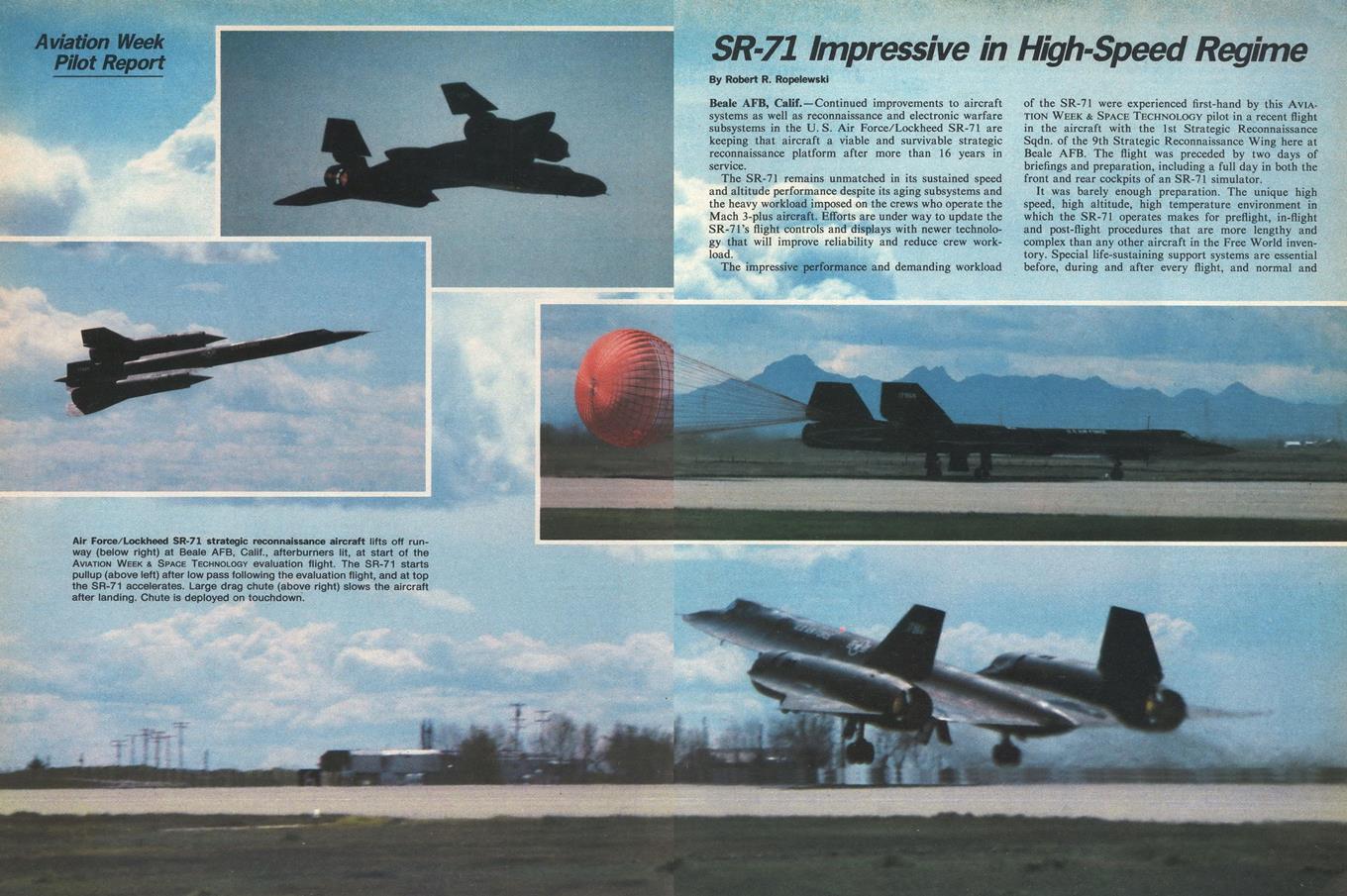 The impressive performance and demanding workload of the SR-71 were experienced first hand by Aviation Week's Robert Ropelewski folllowing two days of preparation, including a full day in both front and rear cockpits of an SR-71 simulator.

"It was barely enough preparation. The unique high speed, high altitude, high temperature environment in which the SR-71 operates makes for procedures that are more lengthy and complex than any other aircraft in the Free World inventory."

Read the May 1981 pilot report 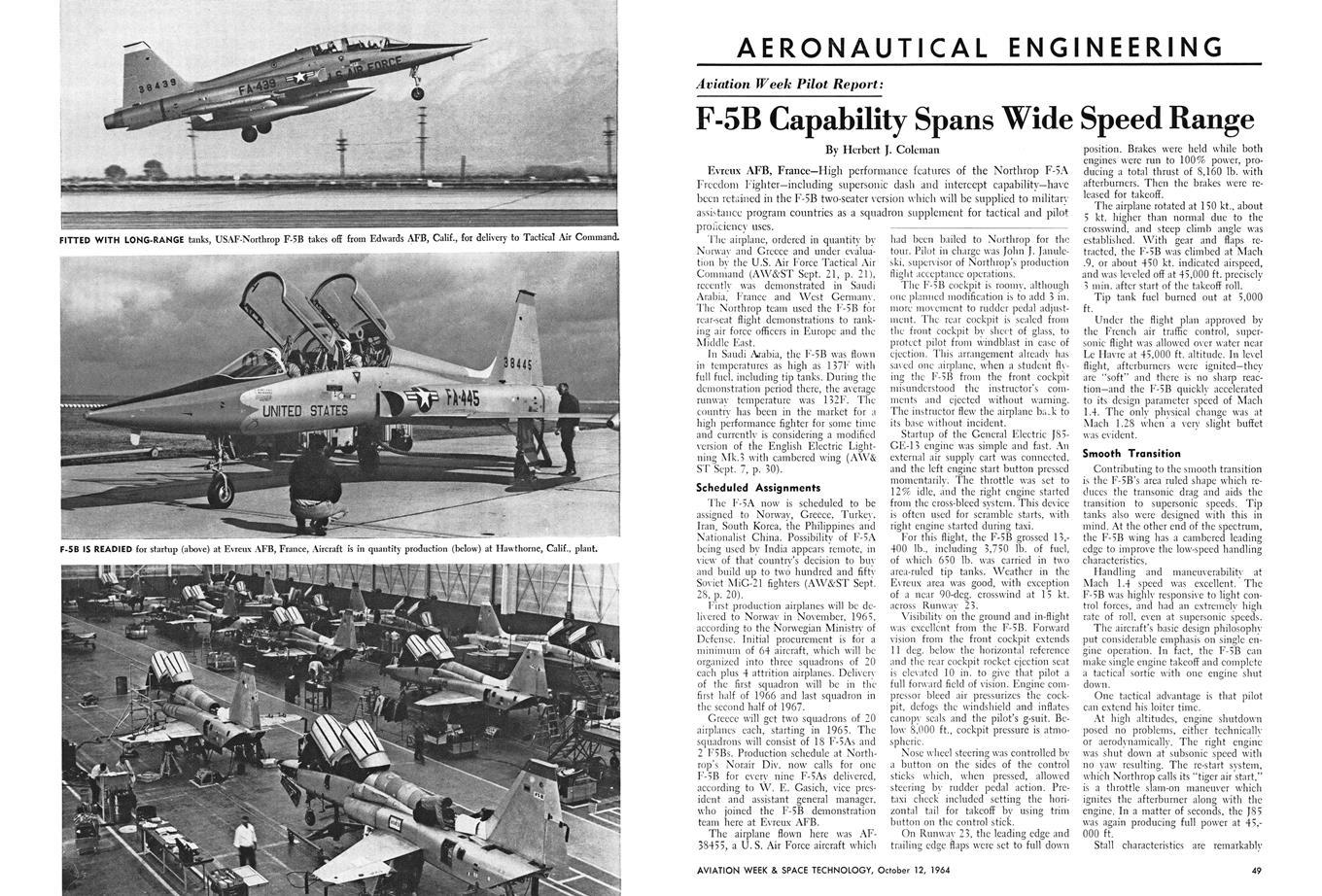 After flying the Northrop F-5B from Evereux Air Force Base, Aviation Week pilot Herbert Coleman wrote: "Contributing to the smooth transition is the F-5B's area ruled shape which reduces the transonic drags and aids the transition to supersonic speeds.

"Handling and maneuverability at Mach 1.4 speed was excellent. The F-5B was highly responsive to light control forces, and had an extremely high rate of roll, even at supersonic speeds." 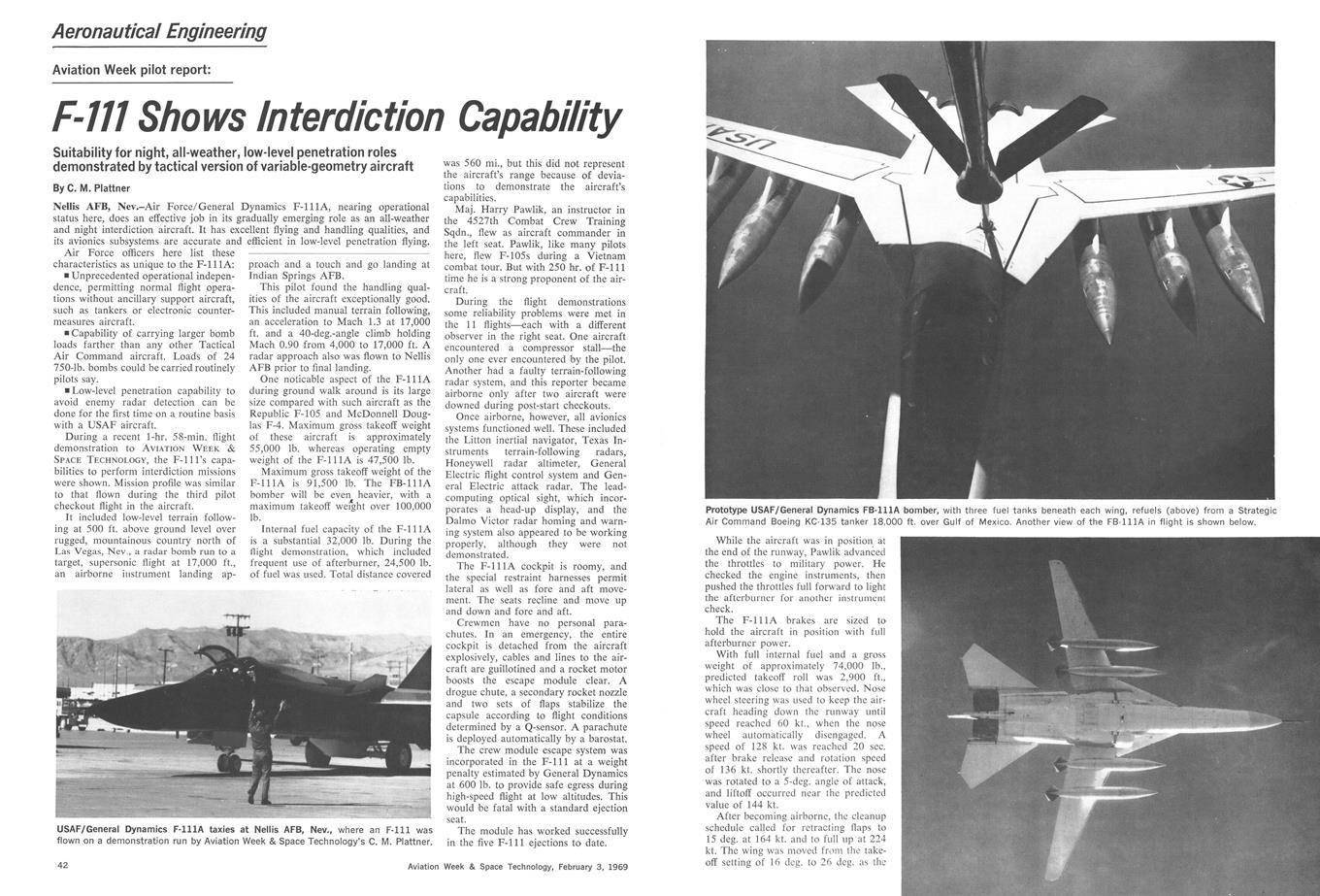 Aviation Week's C.M. Plattner flew 1hr, 58mins in the General Dynamics F-111A, writing that it "does an effective job in its gradually emerging role as an all-weather and night interdiction aircraft. It has excellent flying and handling qualities, and its avionics subsystems are accurate and efficient in low-level penetration flying." 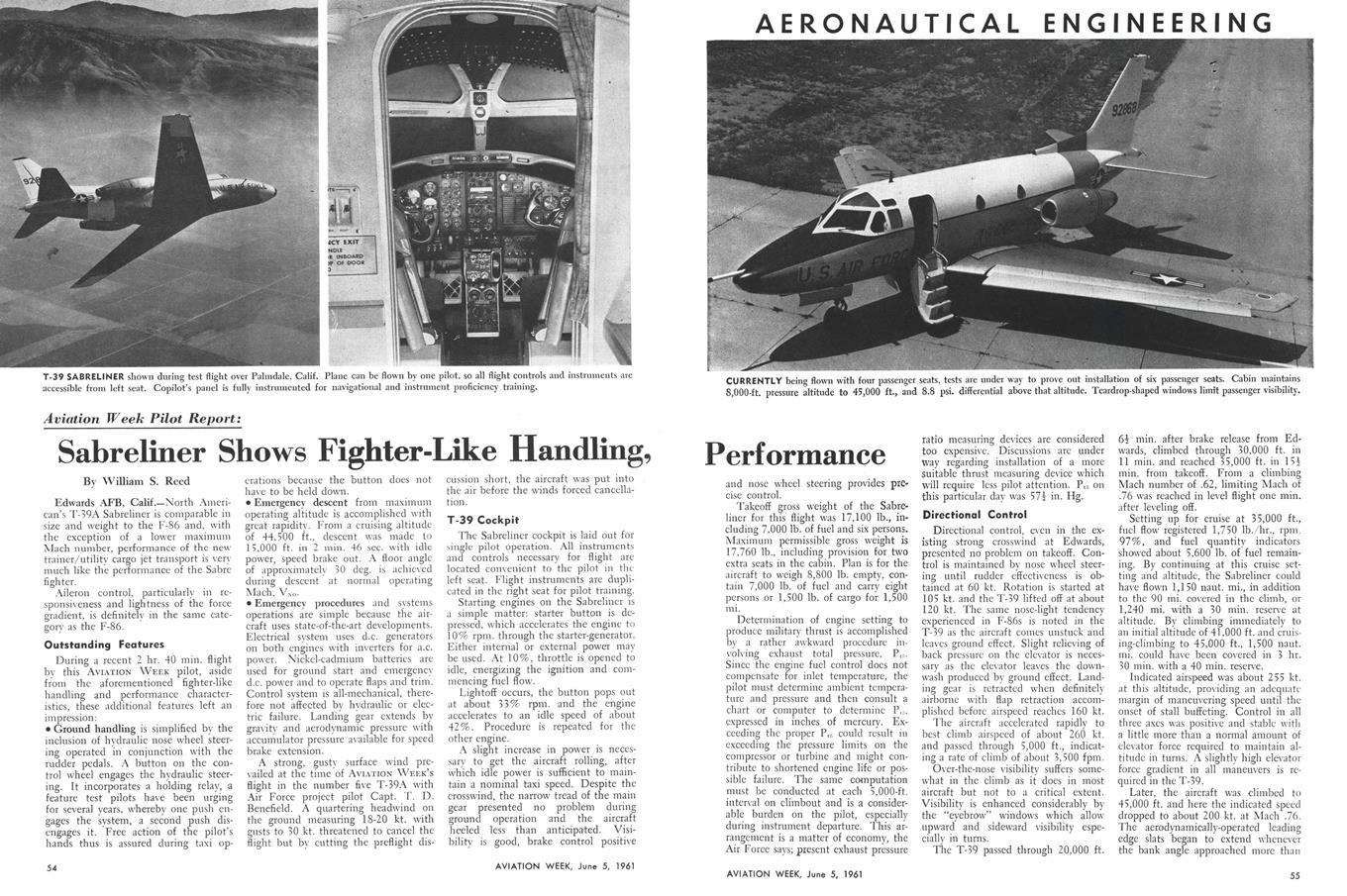 The North American T-39 Sabreliner was flown 2hr, 40 mins by Aviation Week's William Reed, who compared it to the size and weight of the F-86 and, "with the exception of a lower maximum Mach number, performance of the new trainer/utility cargo jet transport is very much like the performance of the Sabre fighter.

"Aileron control, particularly in responsiveness and lightness of the force gradient, is definitely in the same category as the F-86." 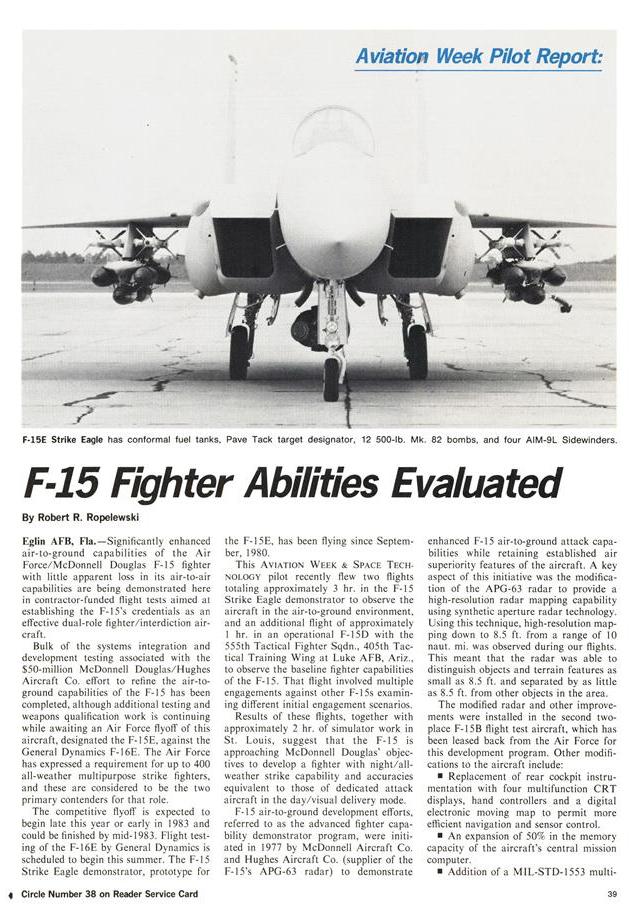 Aviation Week's Robert Ropelewski flew in the McDonnell Douglas F-15 Strike Eagle demonstrator to observe the aircraft in the air-to-ground environment, and a flight in an operational F-15D to observe the baseline fighter capabilities of the F-15. 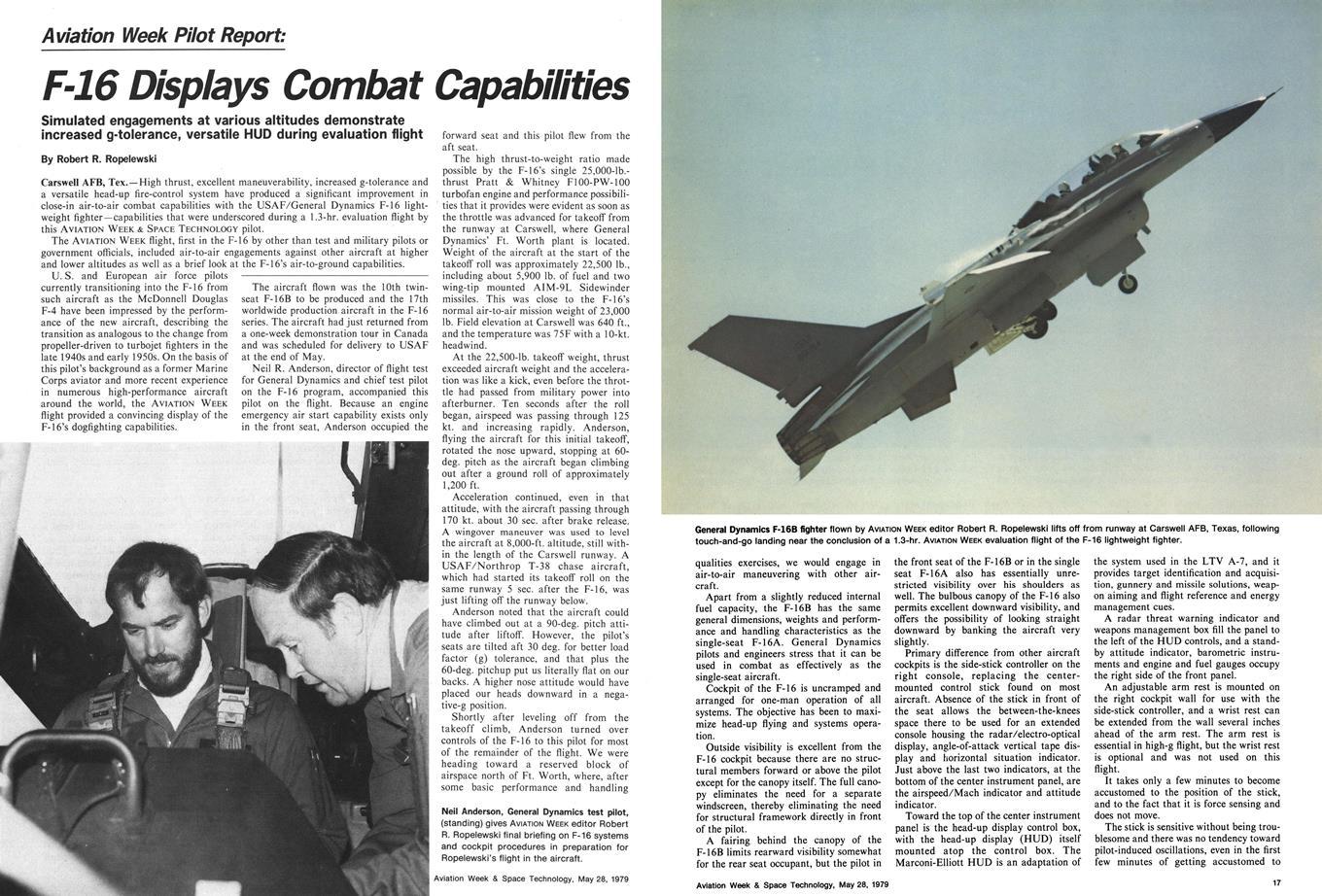 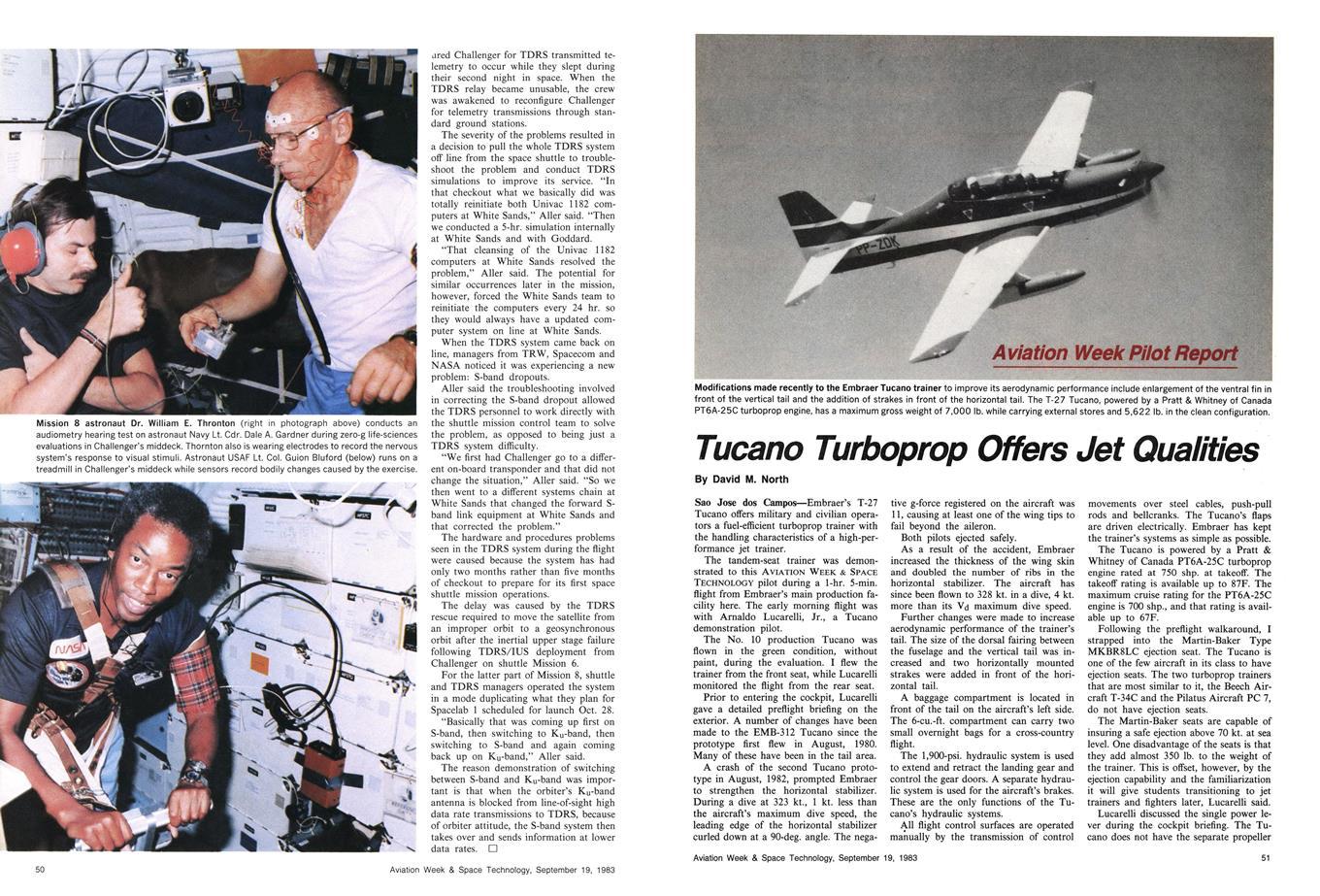 In a tandem-seat trainer, Aviation Week’s David M. North took the aircraft for a spin over hilly Brazilian terrain. He flew from the front, in the weighty ejector seat and commended the visibility from the cockpit through a one-piece canopy as "panoramic".

He described the performance of the aircraft as "predictable" and “at no time during the maneuvers was there a doubt about aircraft recovery. At maximum cruise power, I flew the aircraft at 230kt. to approximate a low-level training mission."

"The Tucano was responsive and comfortable to fly with little turbulence.” 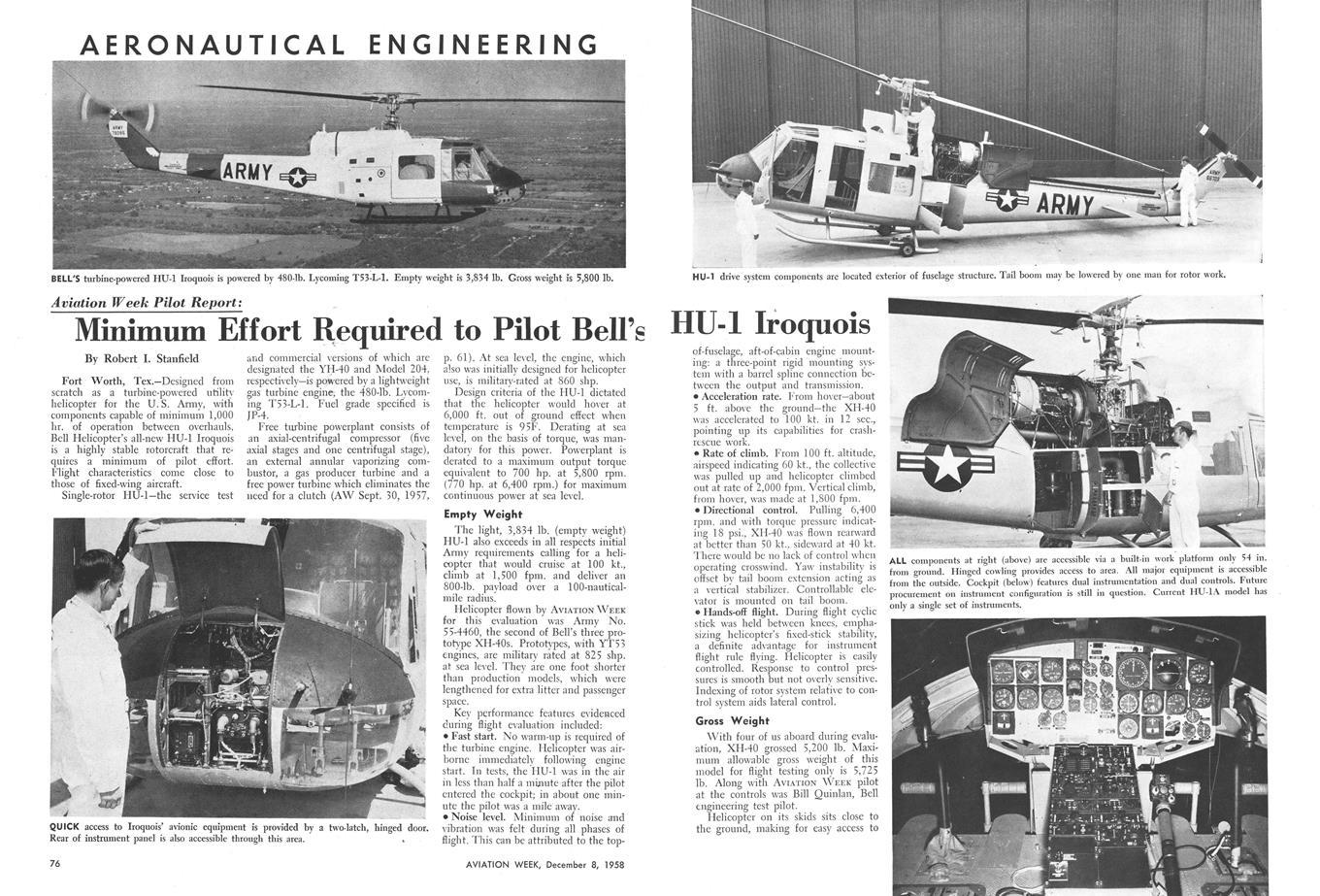 Bell Helicopter’s all-new HU-1 Iroquois is a highly stable rotorcraft that requires a minimum of pilot effort. Flight characteristics come close to those of a fixed wing aircraft. The one flown by Aviation Week’s Robert I. Stanfield for this evaluation was Army No. 55-4460, the second of Bell’s prototype XH-40s.

These military rated helicopters are one foot shorter than production models which were lengthened for extra passenger space.

Stanfield concluded that the “helicopter is easily controlled. Response to control pressure is smooth but not overly sensitive. Helicopter smoothly flew up vertically.” 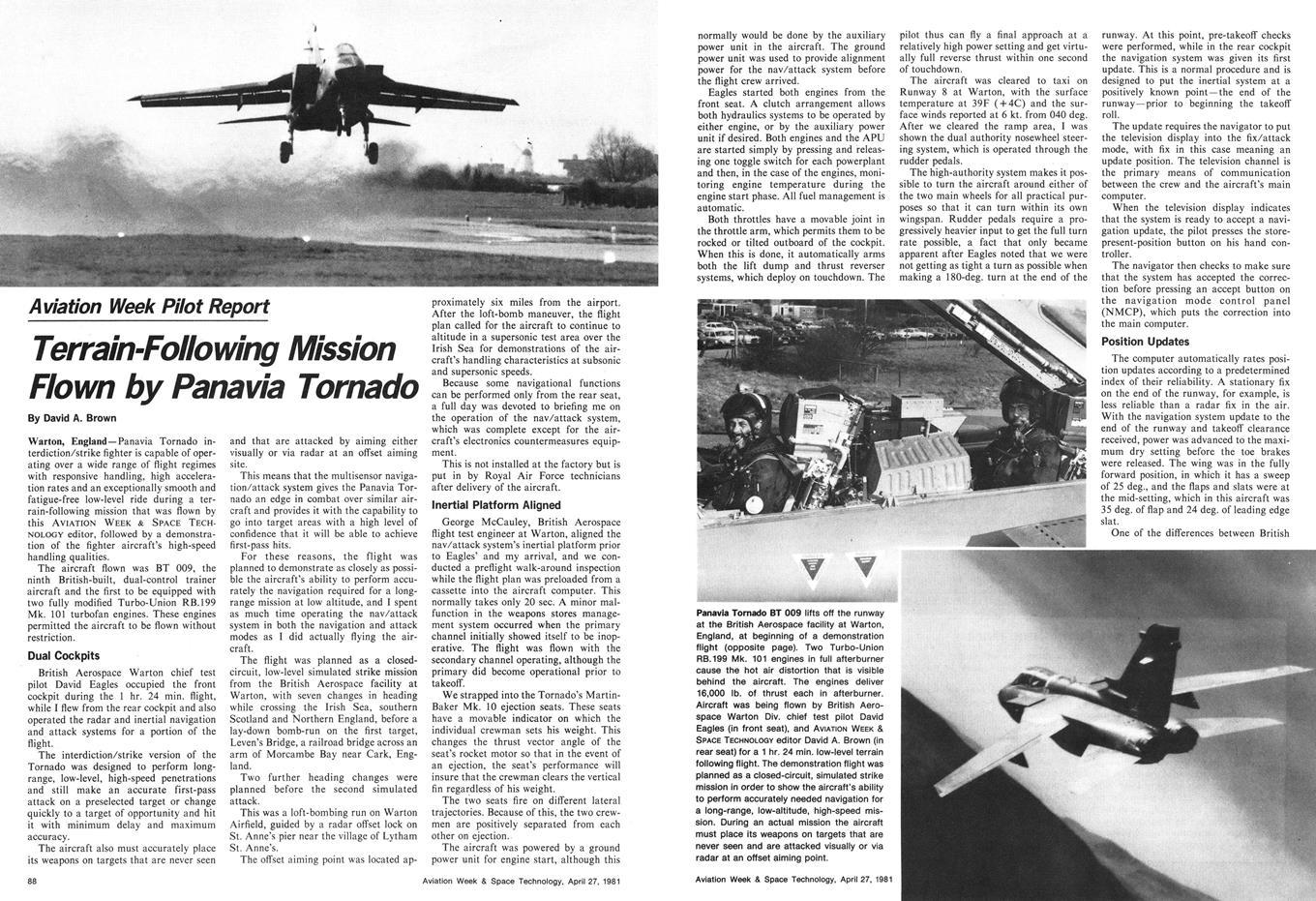 The BT-009 was the ninth British built, dual-control trainer and the first to be equipped with two fully modified Turbo Union RB.199 Mk 101 turbofan engines allowing the aircraft to be flown without restriction.

The multi-sensor navigation/attack system gives the Panavia Tornado an edge over similar combat aircraft and provides it with the capability to go into target areas with a high-level of confidence that it will be able to achieve first-pass hits.

Aviation Week pilot David A. Brown said that aircraft rolls were “no problem” and several “fly-down” commands were "fast enough to generate a little negative-g in the cockpit and lift the pilots off their seats slightly". “Maneuvre was crisp”, he added.

On approaching a supersonic corridor at 12,000 ft. the aircraft accelerated cleanly to supersonic speed and the noise level was “not objectionable”.

“The Tornado is stable throughout its flight but it is exceptionally stable at low airspeeds and in a dirty configuration, the one area it had been thought difficult to handle.” 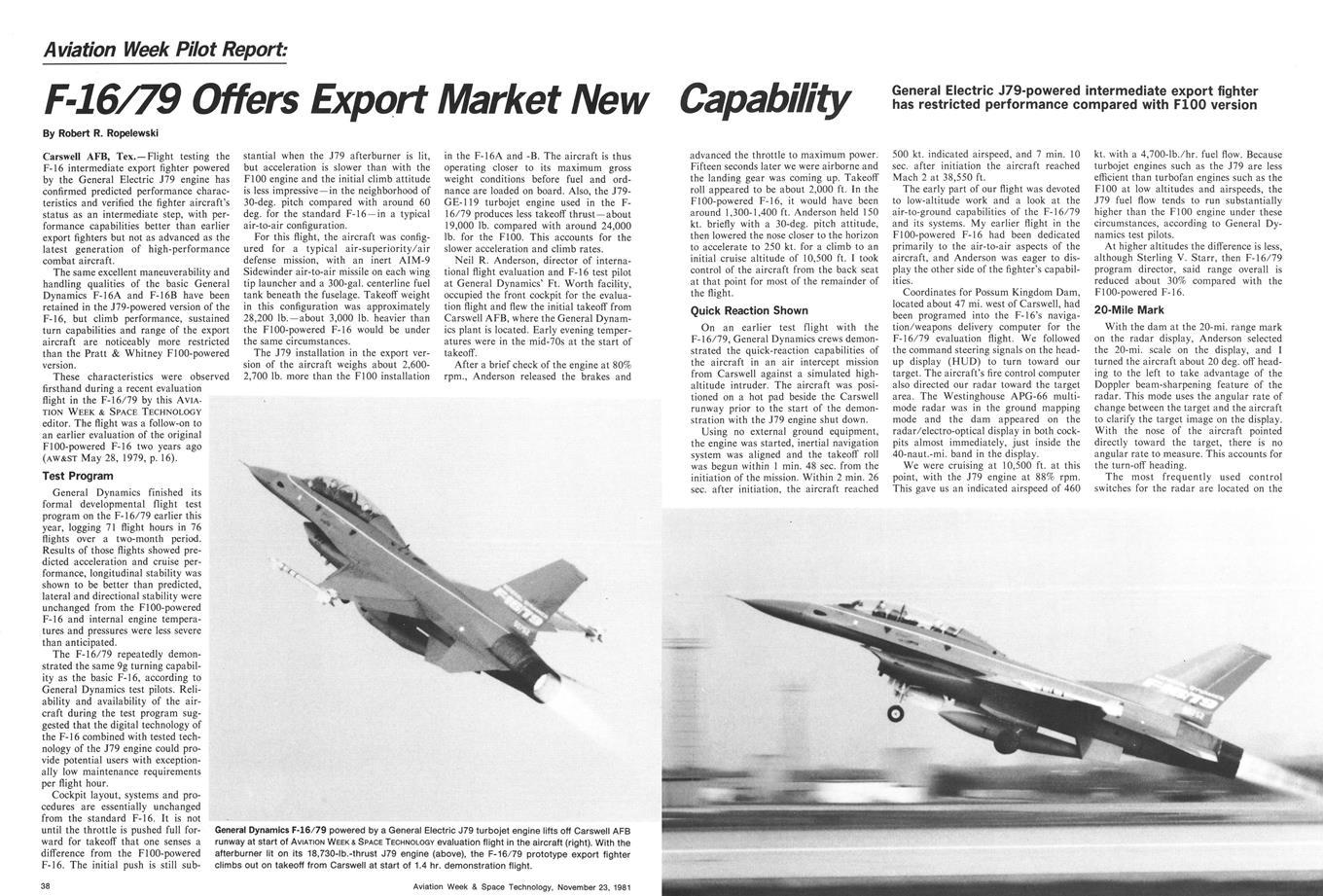 It has confirmed predicted performance characteristics and verified the aircraft’s status as an intermediate step, with performance capabilities better than earlier export fighters.

The same excellent maneuverability and handling of the basic F-16 A and B have been retained in the J-79-powered version but climb performance and range are noticeably more restricted than the Pratt & Whitney F-100 powered version.

The flight was configured for an air superiority/air defense mission. Having previously flown an F-100 powered F-16, where his flight concentrated on the air-to-air aspects of the aircraft, his flight companion was keen to show another side to the fighter’s capabilities. This flight was “devoted to low altitude work and a look at the air-to-ground capabilities. In his report, he was able to make interesting comparisons.

He remarked that visibility was excellent. “One noteworthy characteristic of the F-16 was its absolute smoothness while operating at low altitudes and high speeds over the Texas landscapes. The aircraft exhibited no instability in response to any turbulence." 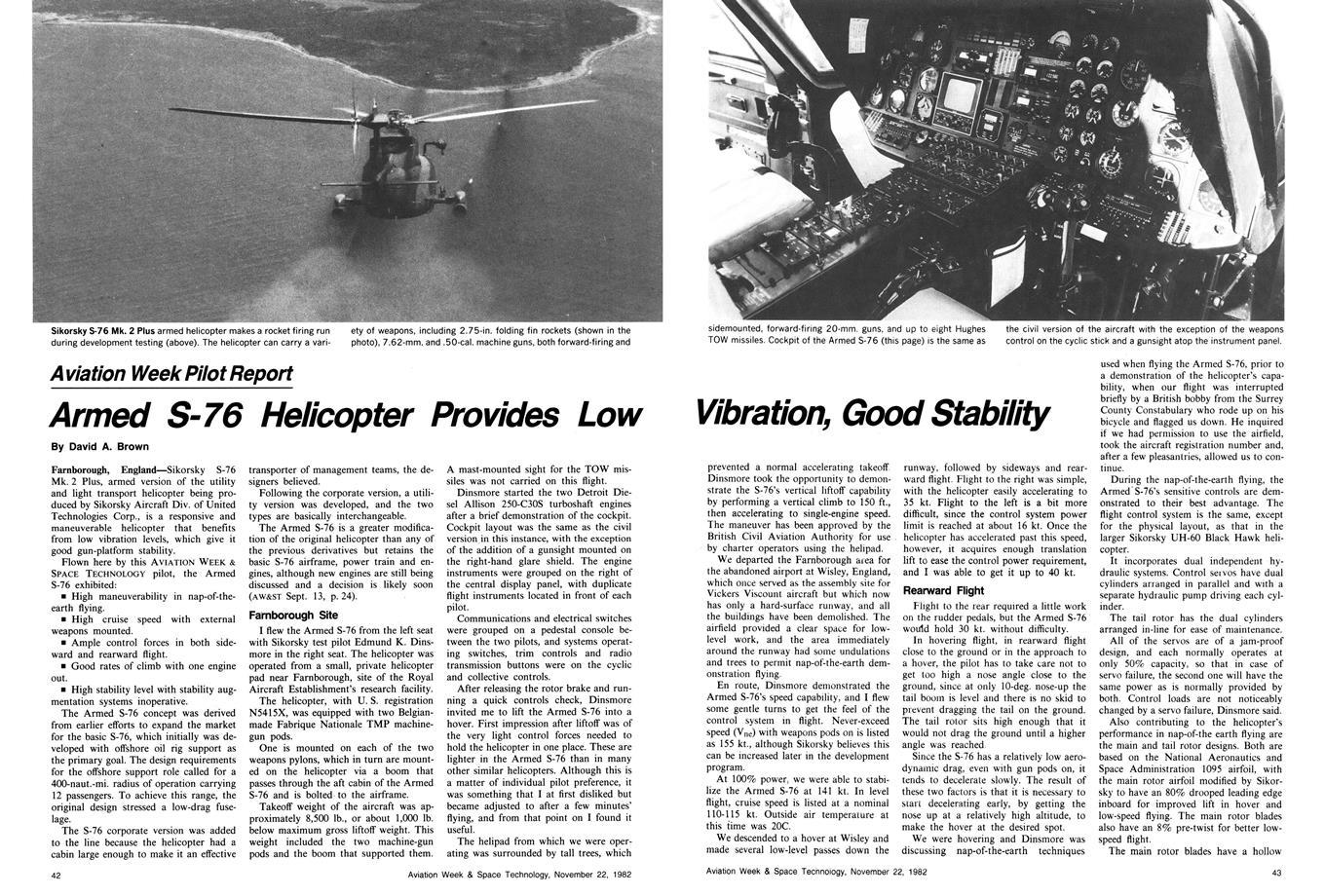 "The aircraft’s sensitive controls are demonstrated to their best advantage at low altitudes or ‘nap of the earth’ flying. Since it is likely that the armed S-76 would operate largely at low altitudes in a military environment a number of modifications we made to the basic airframe to enhance crew safety." Much of this work was based on experience in Vietnam. 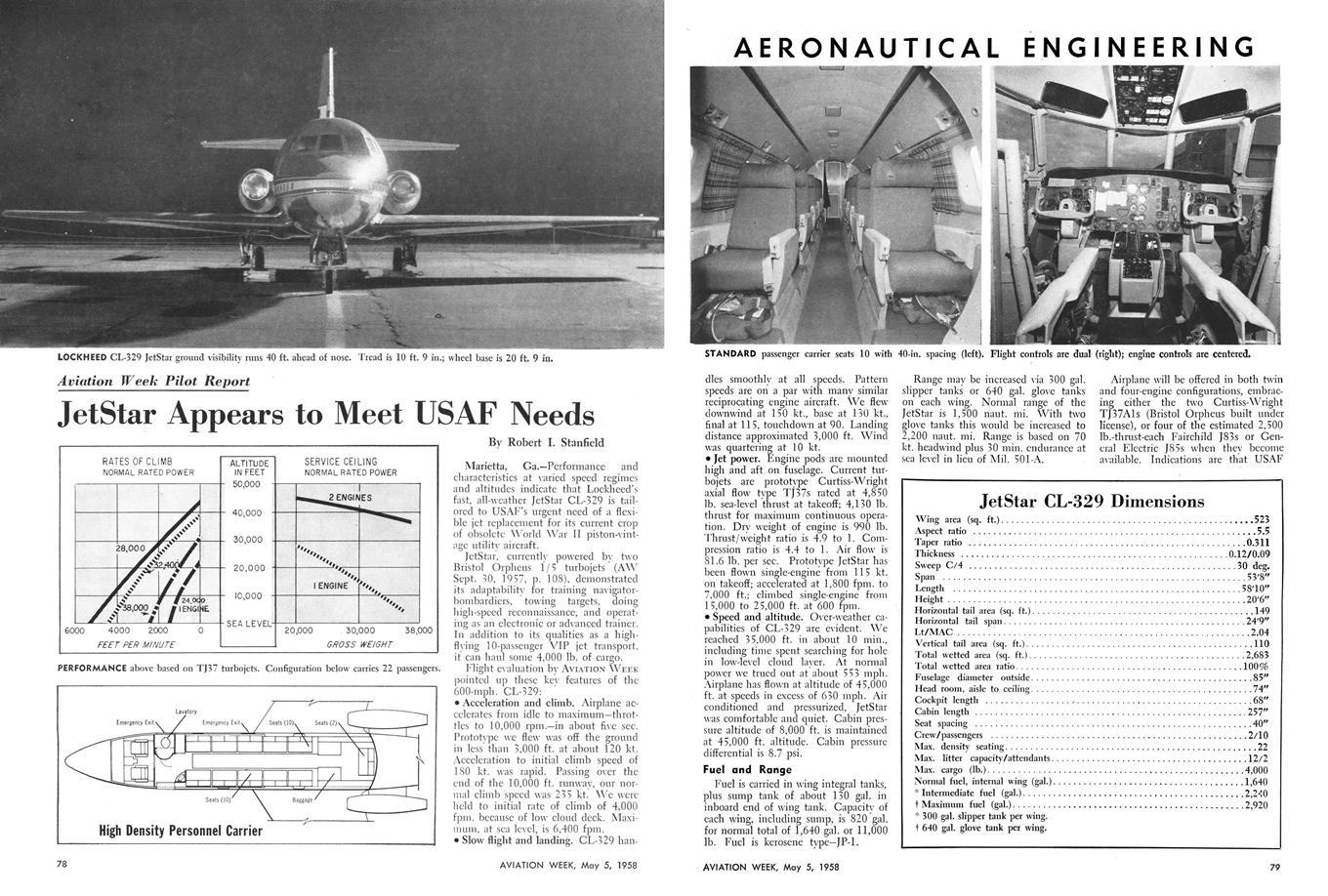 Robert I. Stanfield evaluated the "fast and all-weather" Lockheed CL-329 Jetstar is tailored to meet the urgent needs of USAF of a flexible jet replacement for its current crop of obsolete World War II piston vintage utility aircraft because of its performance and characteristics and varied speed regimes and altitudes.

At an altitude of 45,000 ft. and speeds in excess of 630 mph. the aircraft was comfortable and quiet. "The cockpit is compact yet comfortable and the cabin is luxurious and roomy."

He reported that Lockheed plans for further soundproofing for the production model. 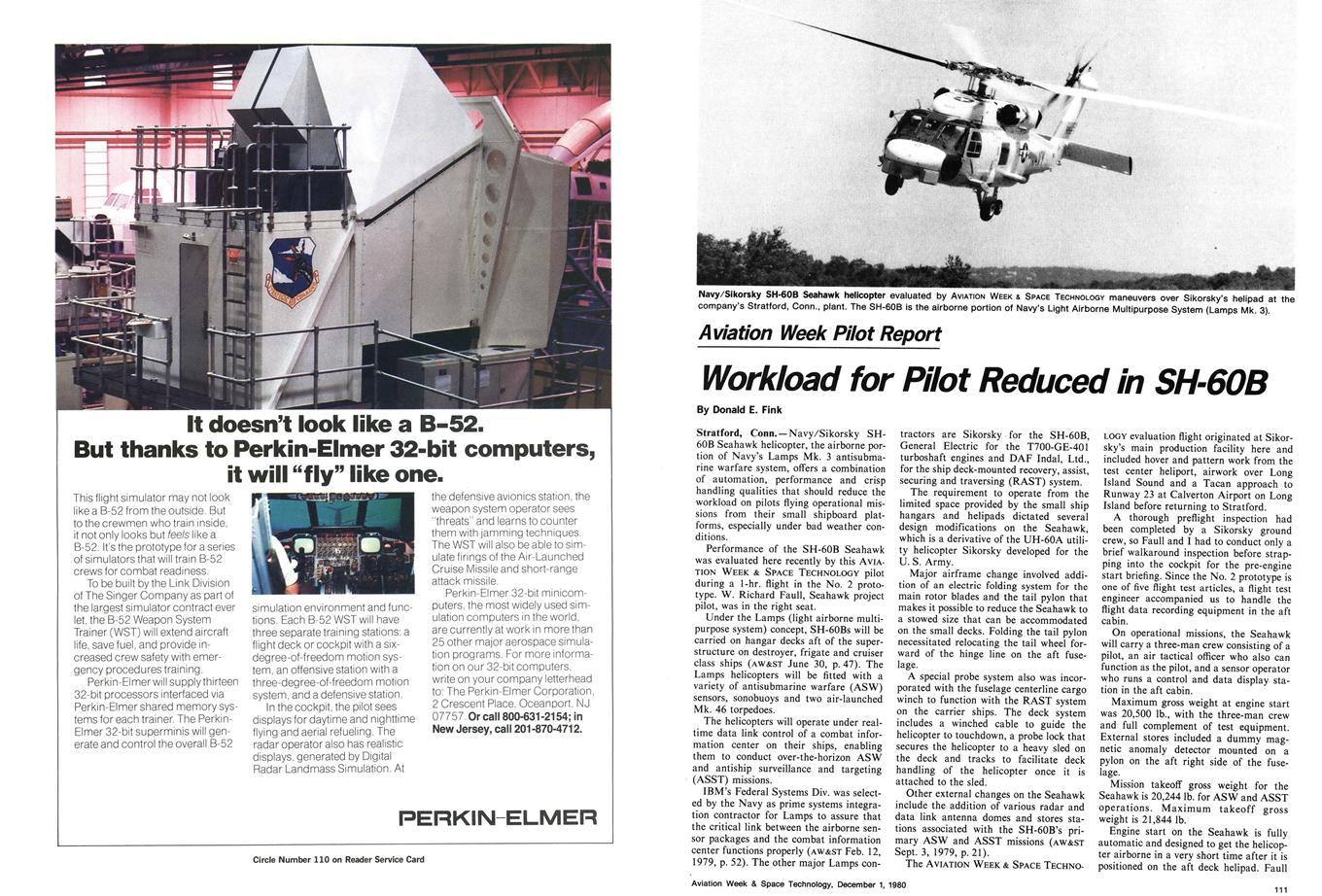 Workload For Pilot Reduced In SH-60B

Aviation Week’s test pilot, Donald E. Fink, performed this evaluation flight which included hover and pattern work from the test center heliport, and airwork over Long Island Sound. He remarked that the Seahawk “seemed quite easy and responsive to taxi. At high speed runs over the Sound, the Seahawk exhibited smooth flight characteristics. Vibration and noise levels were lower than those I had experienced in several current generation executive helicopters. Through a series of tight turns it demonstrated it has excellent high speed handling qualities.” 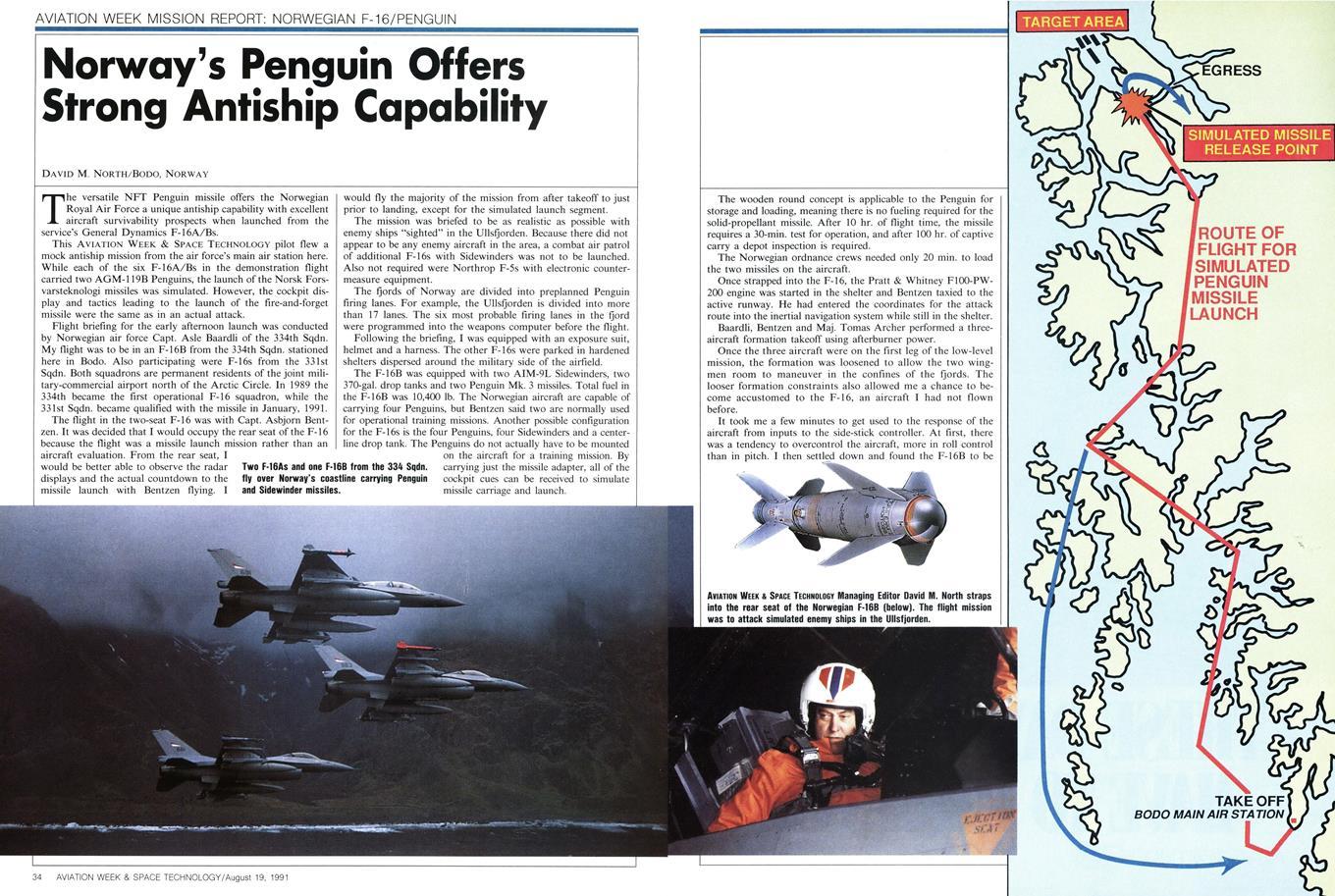 David M. North, Aviation Week's test pilot, flew a mock anti-ship mission in a two-seater F-16B with a Penquin NFT Missile over Norway’s coastline. From his rear seat he was “better able to observe the radar displays and the countdown from the missile launch.”

He reported that the fjords of Norway are divided up into preplanned Penquin firing lanes.

"The aircraft is equipped to carry four of the missiles, but for training missions, two are used, but they don’t actually have to be mounted on the aircraft for a training mission. By carrying just the missile adaptor, all of the cockpit cues can be received to missile carriage and launch." 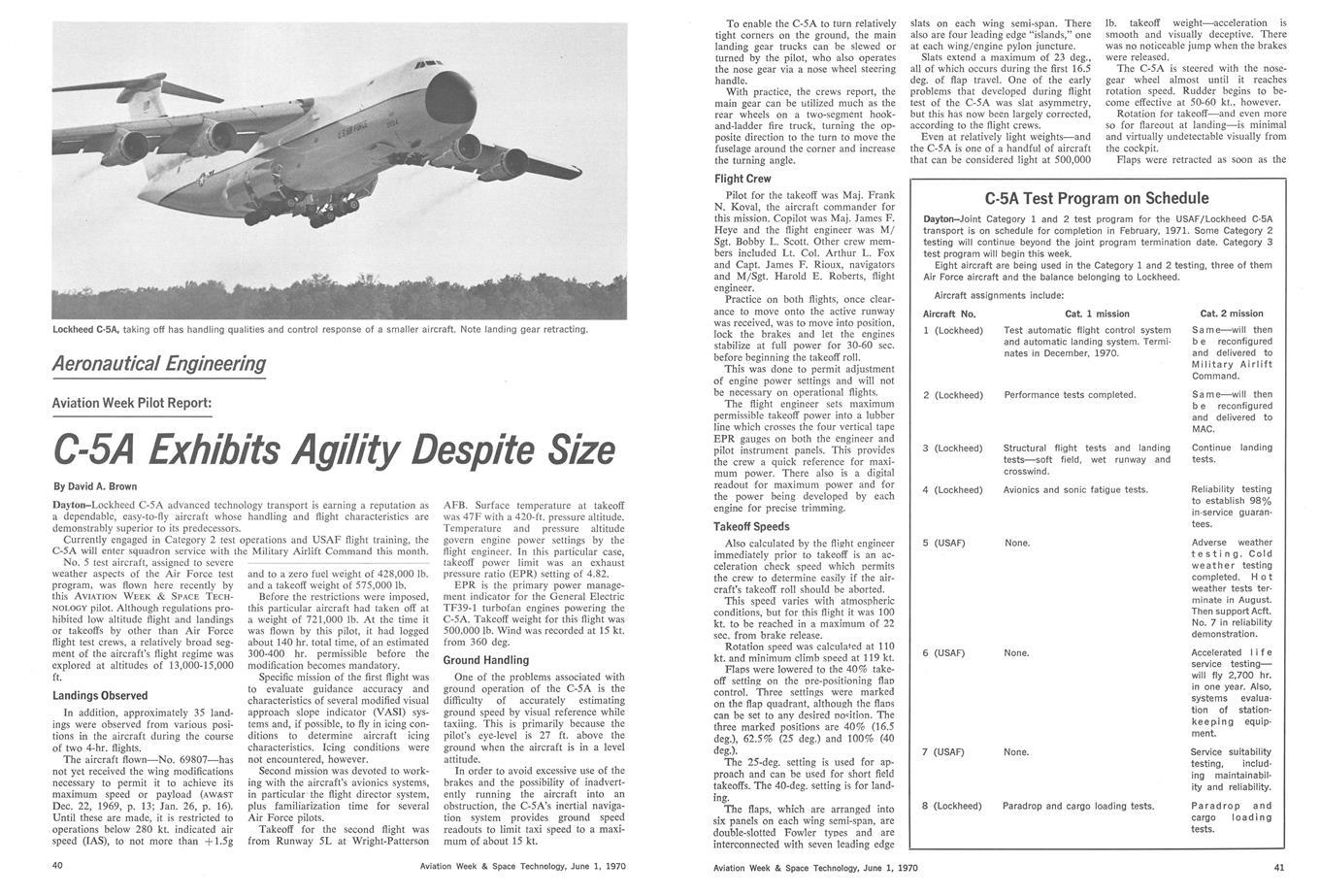 The aircraft flown by Aviation Week’s David A. Brown had not yet received the wing modifications necessary to permit it to achieve its maximum speed or payload.

“A relatively broad segment of the aircraft’s flight regime was explored at altitudes of 13,000-15,000 ft.”

His first flight evaluated guidance accuracy, and characteristics of modified visual approach slope indicator systems and the second mission was devoted to the avionics systems.

The most impressive aspect of the C-5A in flight was its extreme responsiveness and agility despite its great size. 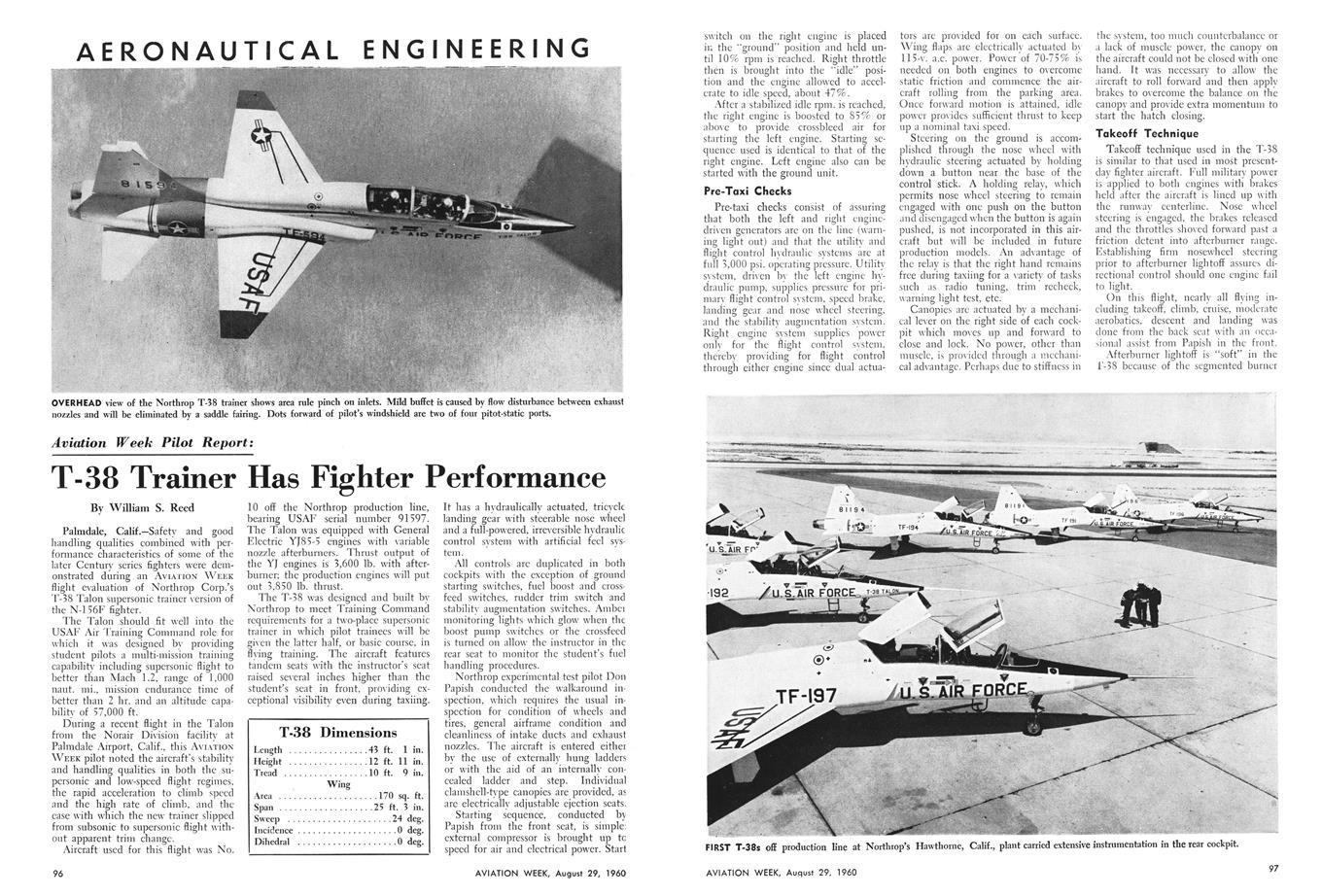 Safety and good handling qualities combined with performance characteristics of some of the later Century series fighters were demonstrated during a flight evaluation of Northrop Corp.’s T-38 Talon supersonic trainer version of the N-156F fighter.

Aviation Week’s pilot William S. Reed said the aircraft would make an ideal fighter trainer "since it will provide students with an aircraft in which to develop the technique to be used in fighter aircraft". 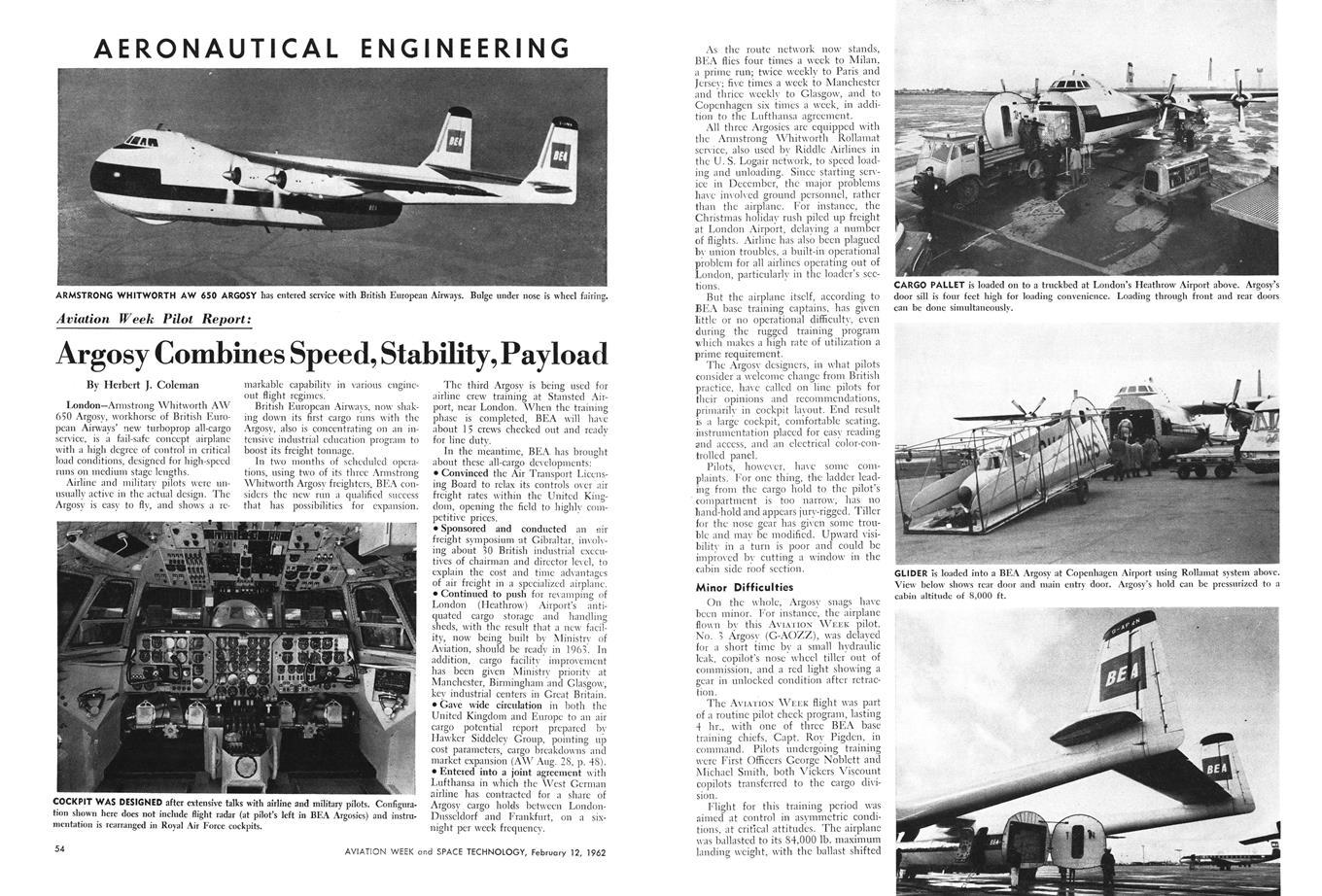 ​Herbert J. Coleman began his evaluation article by explaining that the design of the Armstrong Whitworth AW 650 Argosy was designed by pilots from both the military and airline disciplines, “a welcome change from British practice.”

Relying on opinions and recommendations, the end result is a large cockpit, comfortable seating, instrumentation placed for easy reading and access and color-controlled panel.

“It is a failsafe concept airplane with a high degree of control in critical load conditions, designed for high-speed runs on medium stage lengths.” 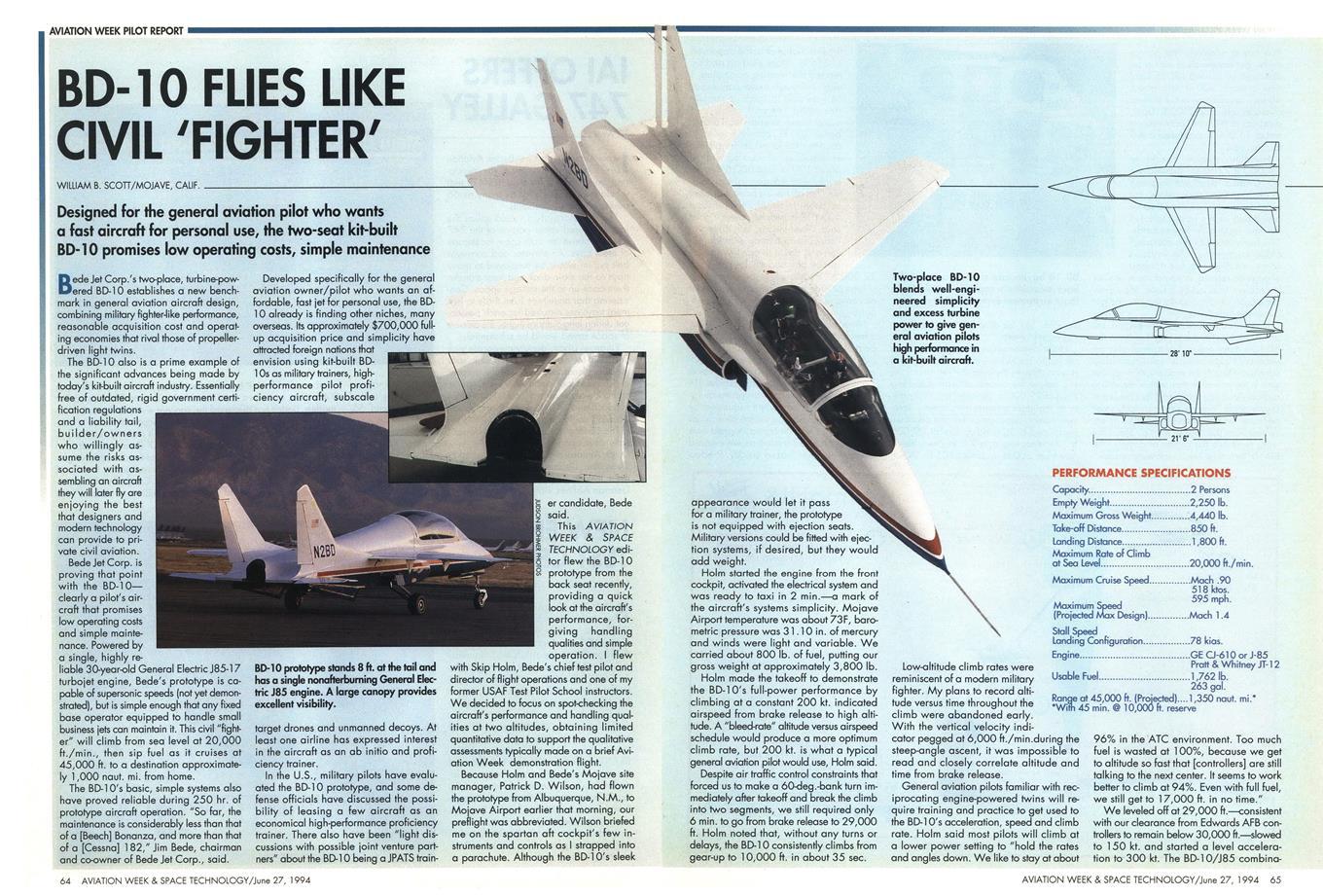 Low altitude climb rates were reminiscent of a modern military fighter. The wing is higher than the center of gravity, which makes the BD-10 act like a “high-wing” aircraft.

Skip Holm, Bede’s chief test pilot, accompanying Scott, said: “If you just screwed up a landing – slammed onto the runway and bounced back into the air – you can go to 100% power, hold the stick full aft and still keep flying. A guy can do a lot of stupid things close to the ground in this airplane, add power and still get out OK.” 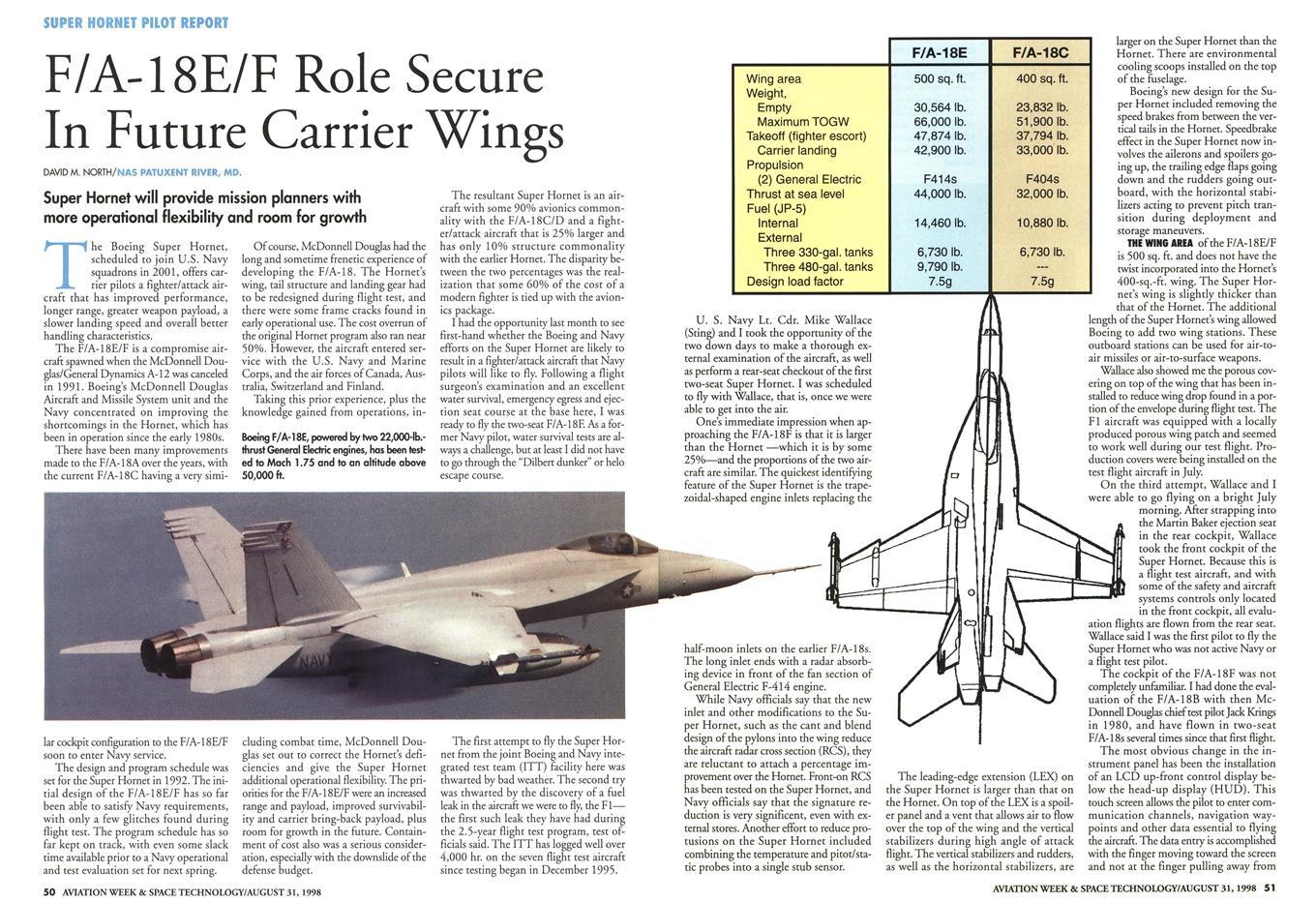 David M. North flew this Super Hornet, of which he said: “The quickest identifier of the Super Hornet (which is larger than the Hornet by 25%) is the trape-zoidal engine inlets replacing the half-moon inlets on the earlier F/A 18s."

Boasting he was the first pilot to fly the aircraft that was not active Navy or test pilot, he said: "Visibility was good from the back seat and it was very responsive to both pitch and roll at low altitudes."

He noted: "While I have not performed air combat maneuvering in this class of aircraft recently, I believe any pilot would feel more than comfortable with the Super Hornet in [a] combat scenario.”

<p>We scoured Aviation Week&#39;s extensive archive and delved into just a handful of some of those reports.</p>