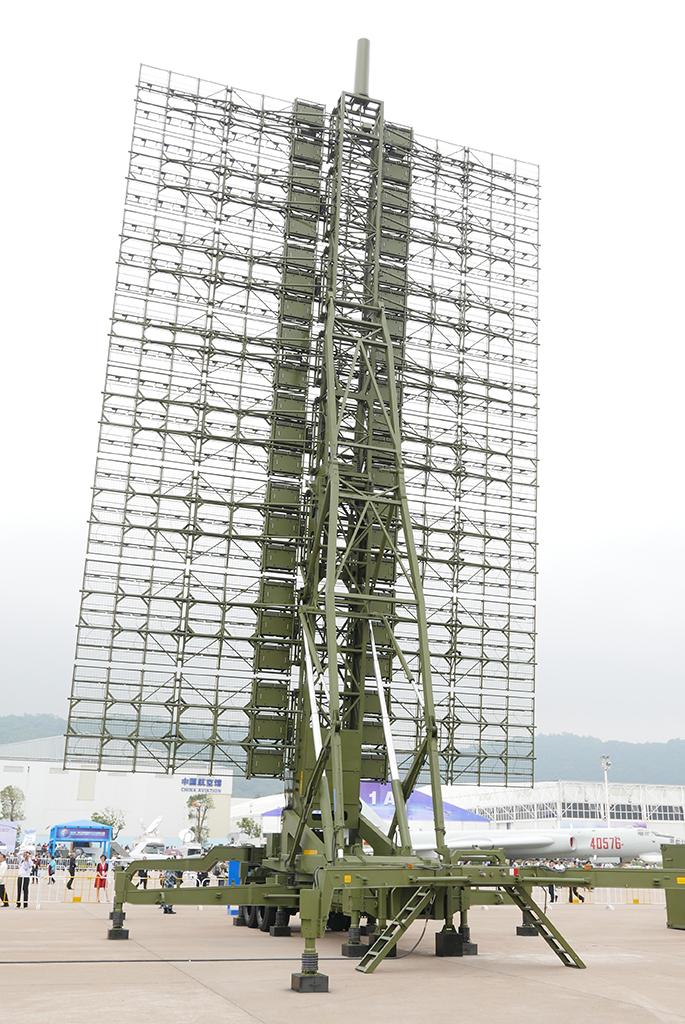 The massive JY-27A VHF active, electronically scanned array radar towered over the static line, presenting the question: How do you move this thing? 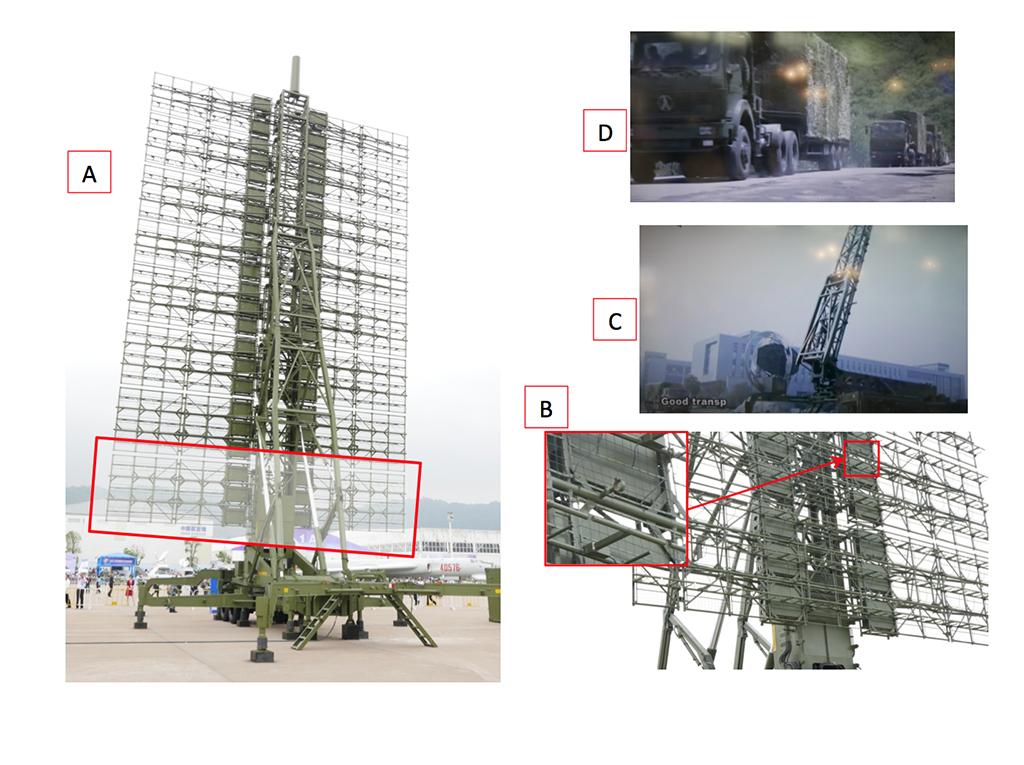 The JY-27A antenna comprises eight panels, each about 40 ft. wide, which are transported on semi-trailer trucks (D) and attached in the field to the backbone structure (C). The close-up shot (B) shows that each panel carries three rows of dipole transmit-receive elements in front of a mesh reflector, and the inset image shows one of the sling loops used to lift the radar. Credit: Bill Sweetman 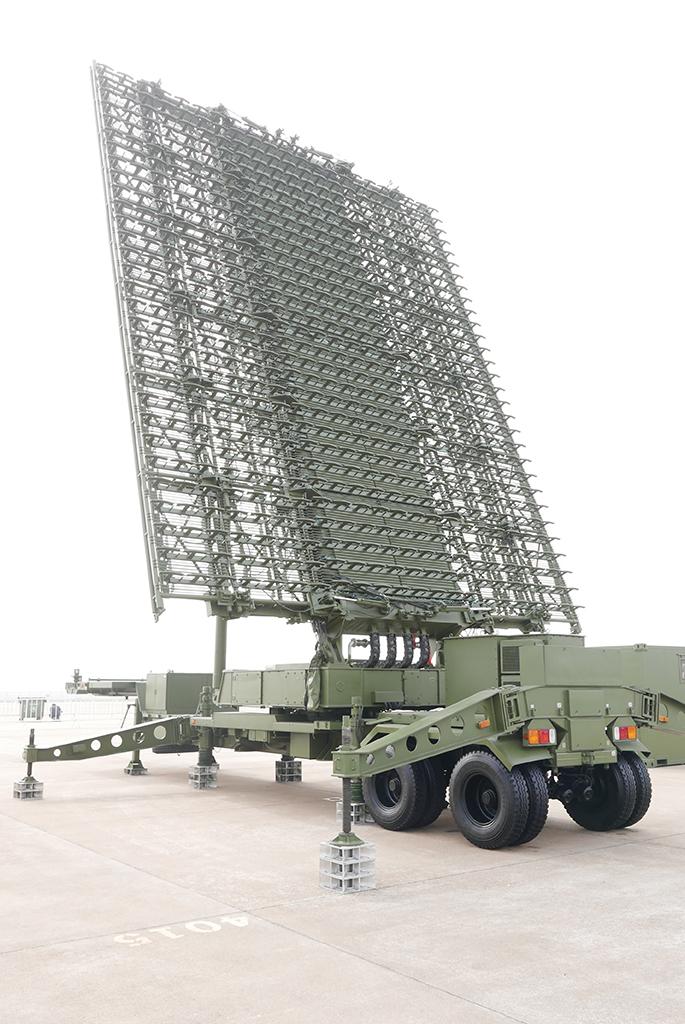 The YL-8C radar from the Nanching division of China Electronics Technology Corp. (CETC) is the UHF companion to the JY-27A and is designed to be cued by the larger radar, with higher resolution and a more focused beam. Credit: Bill Sweetman 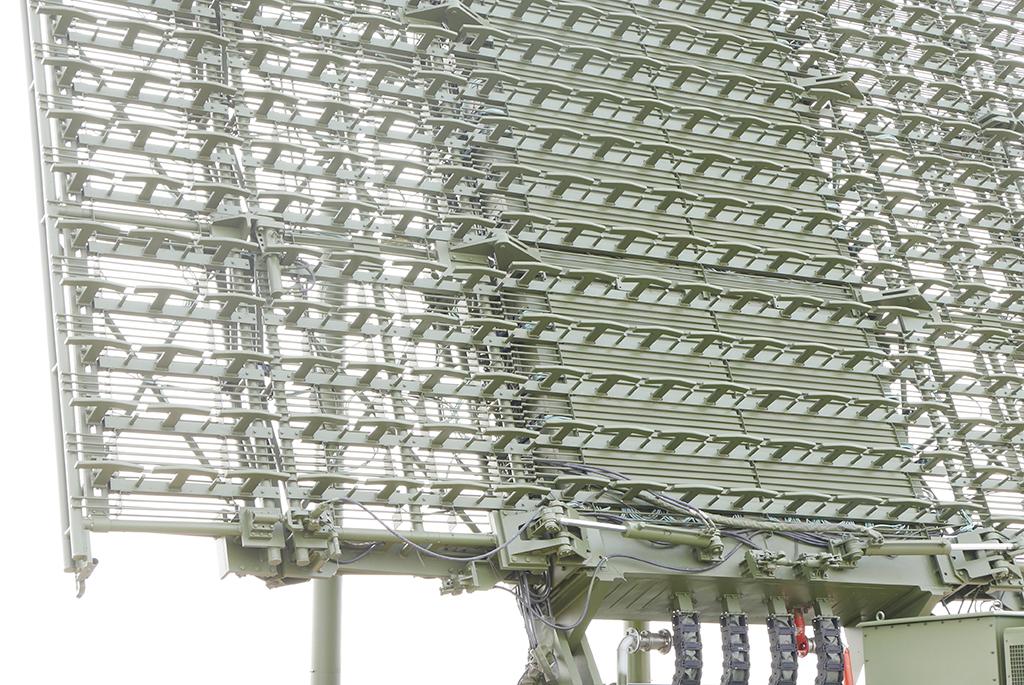 The YL-8C also has rows of antenna elements, but the smaller array is designed for transport in a single unit, with the outer panels folding forward and inward. Credit: Bill Sweetman 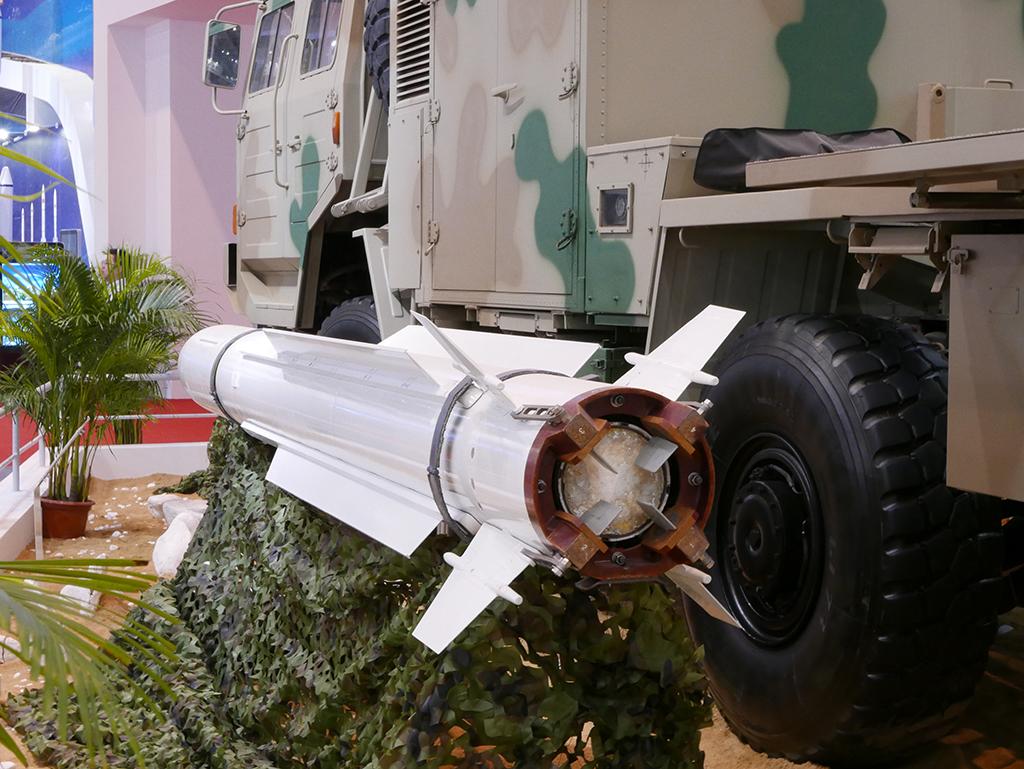 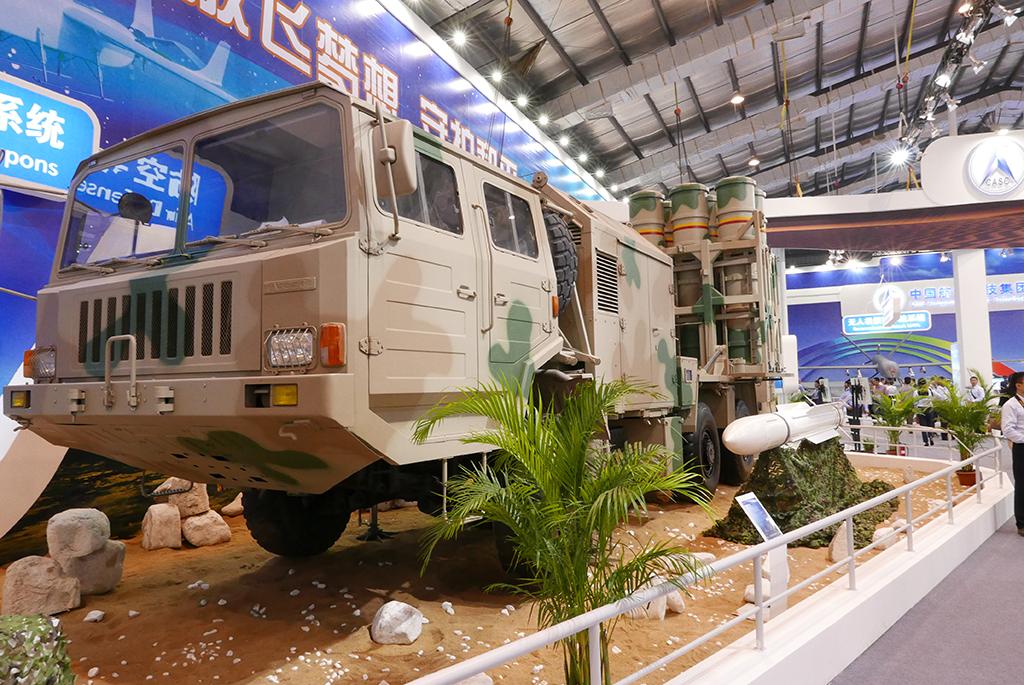 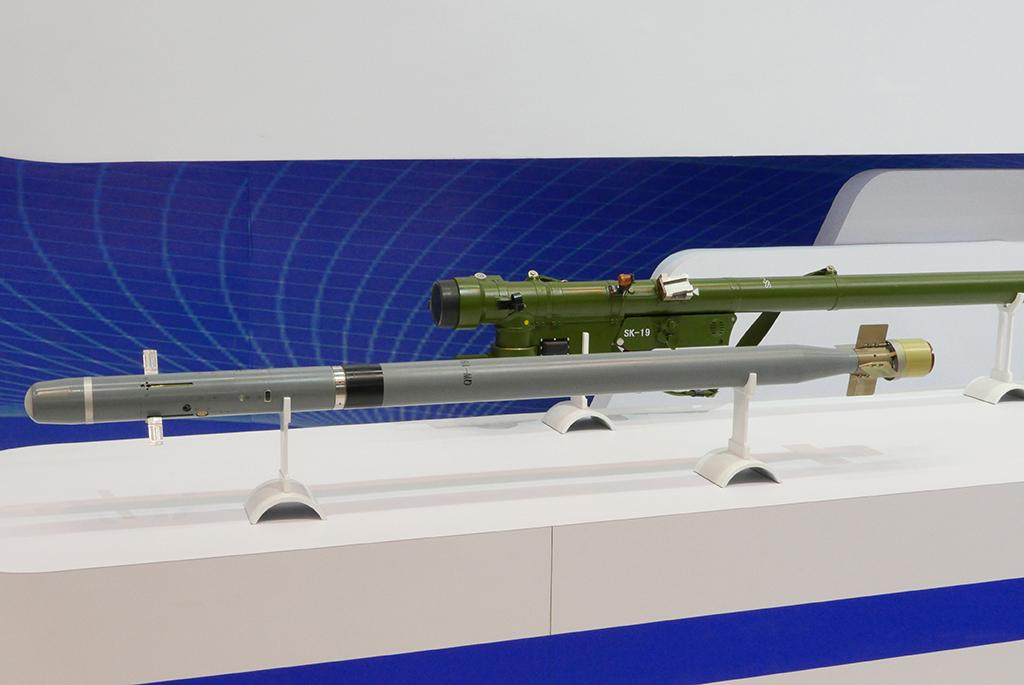 The new QW-19 man-portable air defense system is said to feature several advances over the older QW-18, including a digital seeker, contact-proximity fuze and improved controls, with four rather than two forward fins. It also has an inertial guidance mode that permits “shooting by direct aiming,” according to the maker’s documentation. Credit: Bill Sweetman 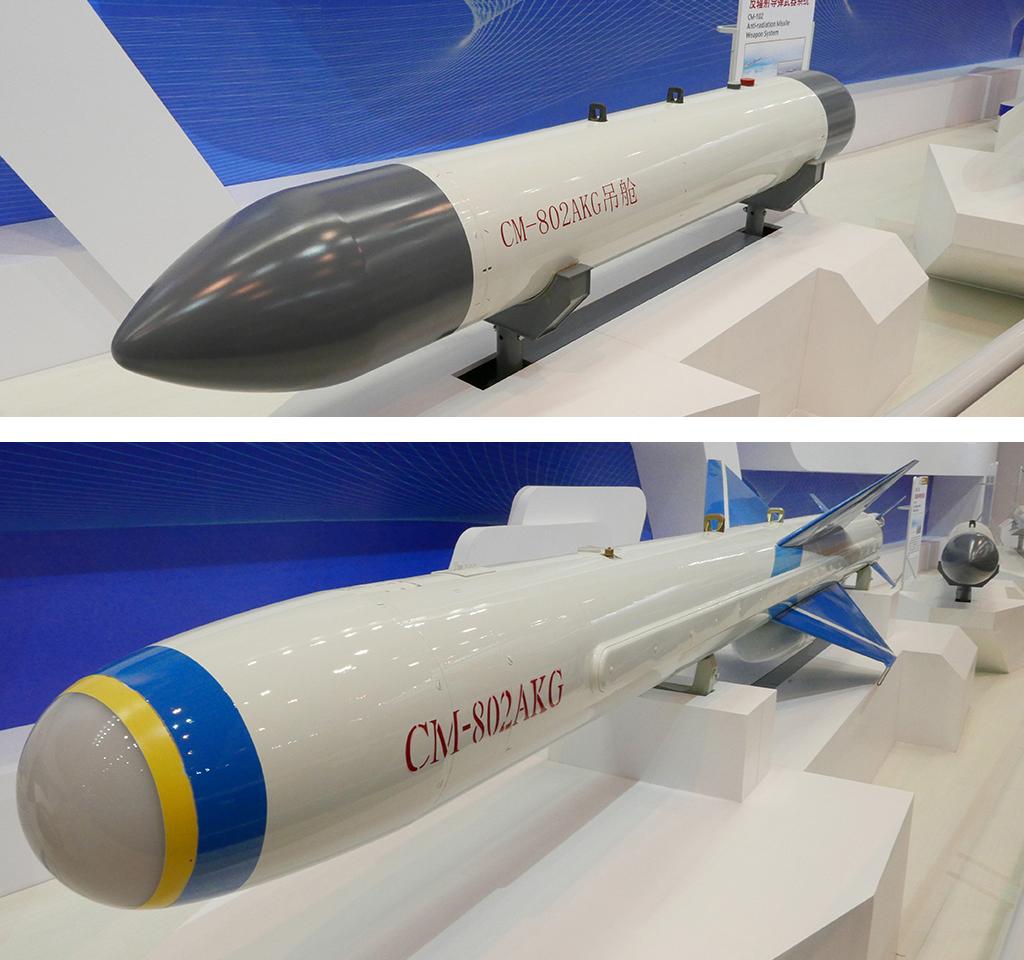 The CM-802AKG is a turbojet-powered standoff missile designed with man-in-the-loop guidance using either a day TV or imaging infrared sensor. Like the Israeli Rafael Popeye, it requires a dedicated datalink pod. Credit: Bill Sweetman 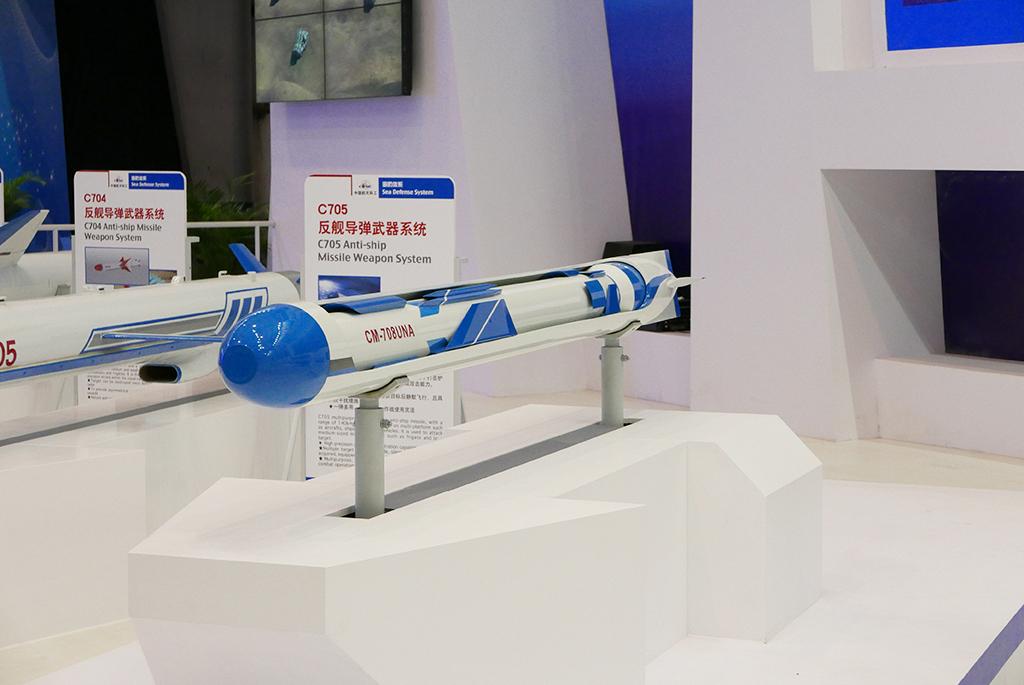 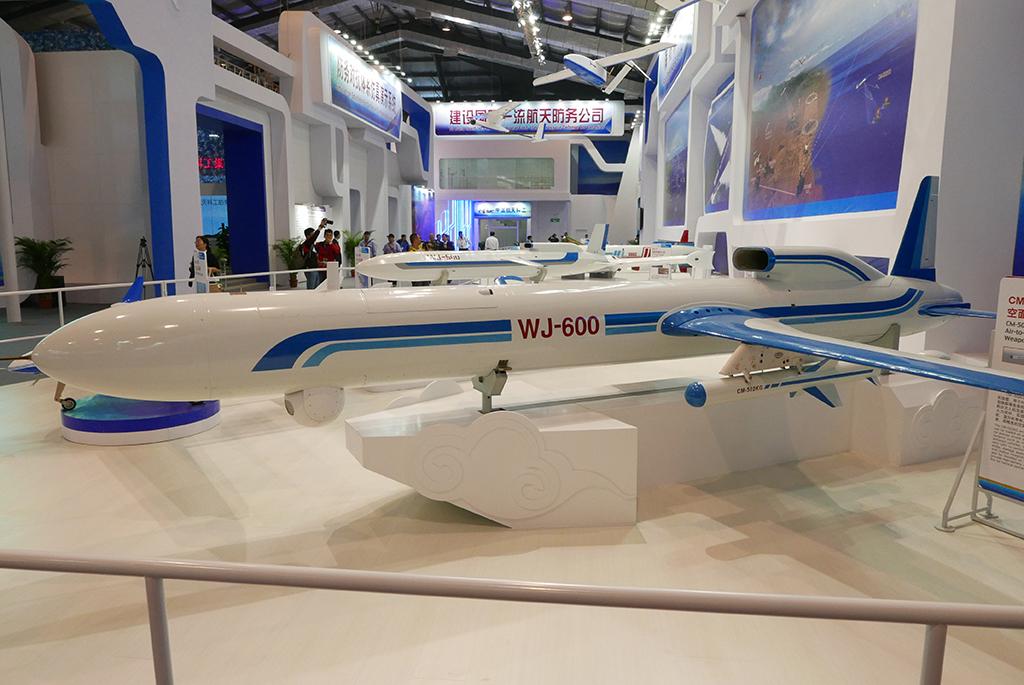 A subscale model of the Casic WJ-600 unmanned air vehicle. The jet-powered vehicle is ramp-launched and recovered using parachutes and airbags, like the long-retired Canadair CL-289, and is claimed to have a 5-hr. endurance and 130-kg (286-lb.) payload, including guided weapons. Credit: Bill Sweetman 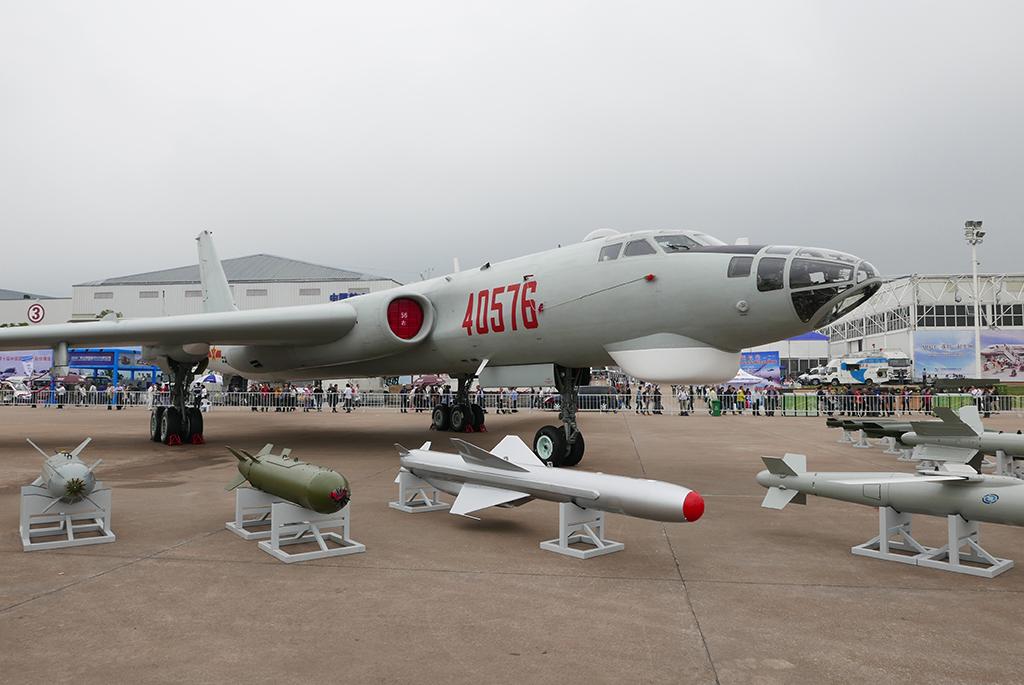 The 1950s-technology Xian H-6M bomber appeared with a range of standoff weapons, including the CM-802AKG missile. The bomber has a new aft-mounted centerline pylon that is likely associated with the missile’s datalink pod. Credit: Bill Sweetman 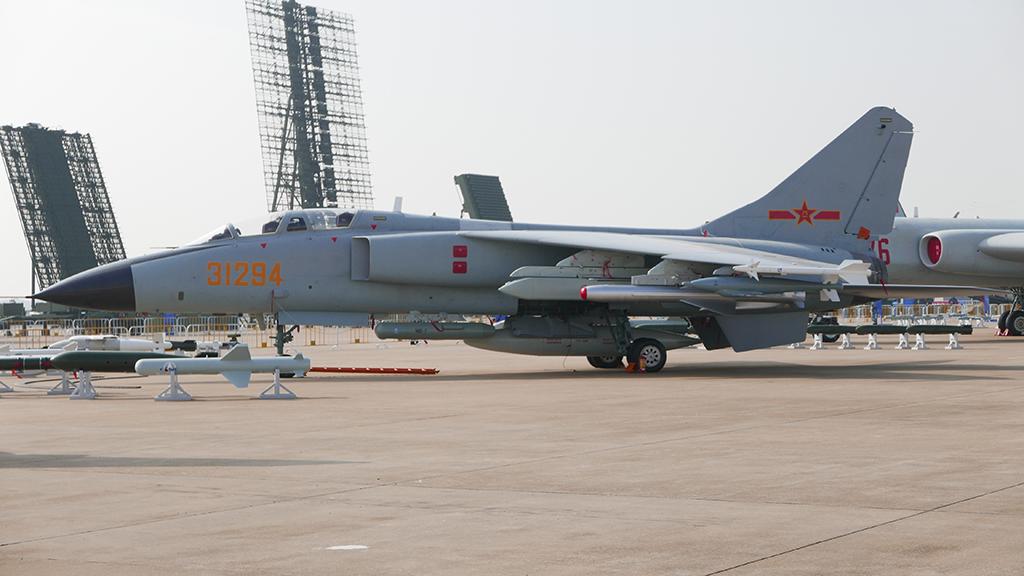 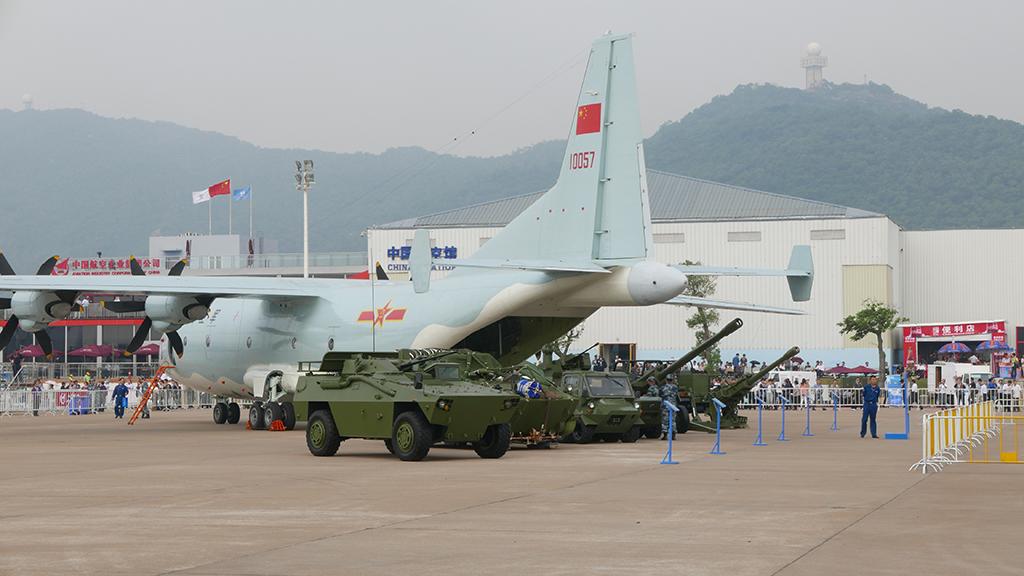 The tail section of the Shaanxi Y-9 turboprop transport, a reengined and refined derivative of the Antonov An-12, has apparently been designed to accommodate a tail warning radar, replacing the Russian aircraft’s gun turret. In the aircraft on show, the radar did not seem to be installed, since missile-approach warning sensors were attached to the radome. Credit: Bill Sweetman

China’s Zhuhai air show this year may have been the best ever in terms of new defense exhibits. But any information other than wall charts, videos and the occasional brochure was hard to come by, even with an interpreter on hand: Informal talks with foreign media or analysts were definitely not encouraged. On the other hand, Zhuhai had no photography restrictions (unlike some U.S. shows), unless you count the ever-present haze and backlight. Aviation Week Senior International Editor Bill Sweetman took advantage of this opportunity. Also, read his overview commentary, China’s Radar and Missile Work Means More Than Fighters.