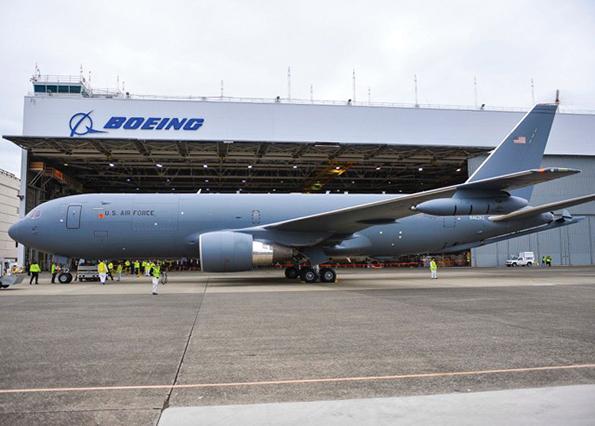 In late 2015 or early 2016, EMD-2 will begin transferring fuel to a variety of receivers, starting with the F-16 and including other fighters, transports, the U.S. Air Force A-10 and U.S. Marine Corps AV-8B Harrier. 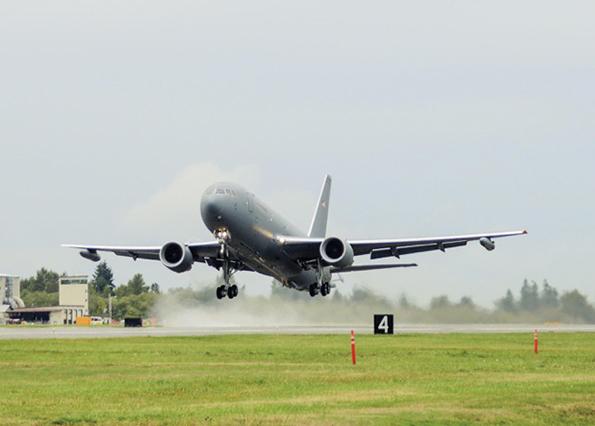 EMD-2 took off from Paine Field, Washington, Sept. 25 at 1:24 p.m. local time for its long-awaited maiden flight. This milestone was delayed repeatedly as Boeing sorted through problems that cropped up in 2014 with inadequate design for its wiring harnesses; they did not meet military specifications for safe separation and redundancy standards. Also, in 2015, testing revealed the fuel system manifold, which routes gas throughout the jet to the hose-and-drogue receptacles and boom, was found to be insufficient for the 40-year life required. This, combined with poor weldings for fuel tubes and improper attachments for these tubes to the inner fuselage of the aircraft, drove Boeing to a redesign. All of these shortcomings prompted two charges to Boeing over as many years, totaling about $1.2 billion before taxes, and Boeing is responsible for picking up the tab for retrofits per its contract with the Air Force. 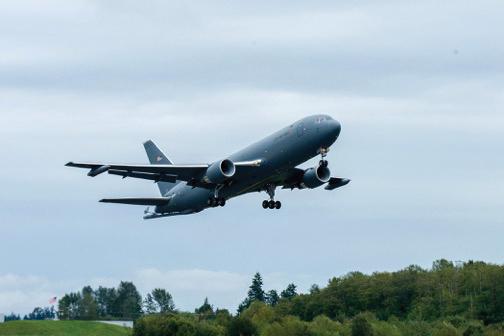 During the 4-hr. flight, Ronald Johnston, Boeing chief test and evaluation pilot, conducted operational checkouts of the engines, flight controls and environmental systems. He took the aircraft to a maximum altitude of 35,000 ft. Johnston says the aircraft’s two Pratt & Whitney PW4062 engines, each capable of producing 65,000 lb. of thrust, performed flawlessly. The aircraft is 165 ft. long with a 157-ft. wingspan. Its maximum fuel transfer load is 207,672 lb. 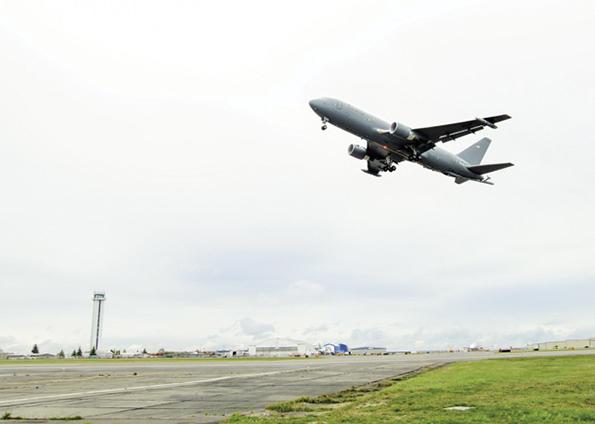 During this first flight, the boom and wing-mounted hose-and-drogue refueling systems remained stowed. The first boom extension is slated for the second EMD-2 flight. 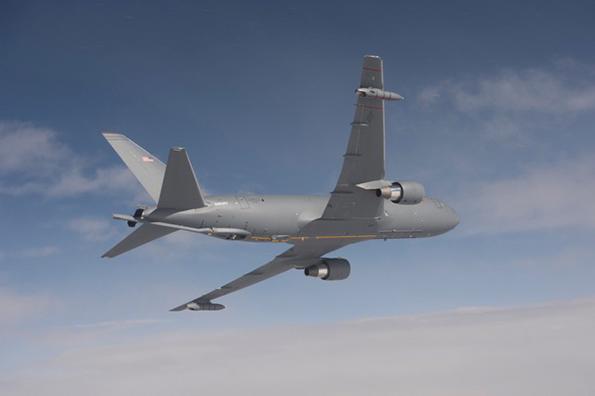 The KC-46 carries a new fly-by-wire aerial refueling boom designed by Boeing and derived from the system used on the Air Force KC-10. While maintaining roughly the same outer mold line as the KC-10 boom, it contains updated internal systems and provides an expanded envelope over the legacy system. It is required to provide 1,200 gal. of fuel per minute to its heartiest receiver, the C-5 transport. The wing-mounted pods are designed to offload fuel at 400 gal. per minute and are designed by Cobham. The outer mold line of these pods was modified based on lessons from the Italian KC-767 program, which encountered buffeting issues during flight testing. 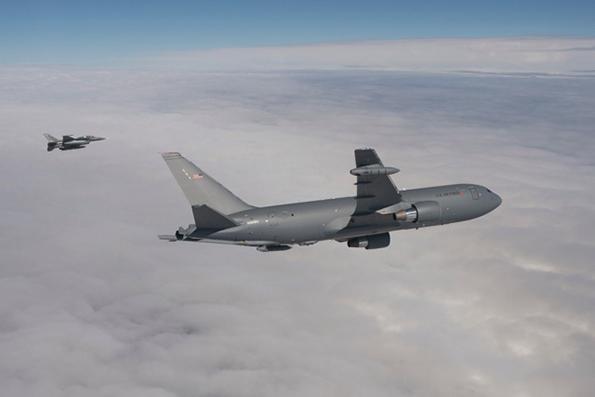 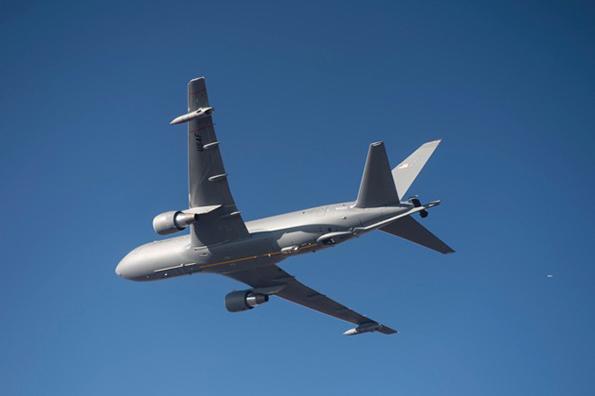 Gone are the days of the KC-135, when boom operators were required to lay at the back end of the jet on their bellies to “fly” the boom for transfers with receivers. The KC-46 contains a remote position at the front of the aircraft—just 8 ft. away from the pilots—for boom operation. This aerial refueling operator (ARO) has two camera systems available to assist in air-to-air refueling. A panoramic camera system mounted in a belly fairing midway between the wing and the empennage consists of three cameras and provides 180-deg. wingtip-to-wingtip viewing for monitoring drogue operations and situational awareness using low-wave infrared cameras. The boom camera system is mounted in the root of the boom fairing attached to the fuselage and provides day and night stereoscopic vision to the ARO for boom refueling operations. EMD-2 sports a prominent yellow stripe on the underbelly of the aircraft down the centerline. It is for orientation for receiver aircraft lining up for tanking on the boom or centerline hose-and-drogue system. The current plan is to include this stripe on operational jets, although officials suggest that could change. 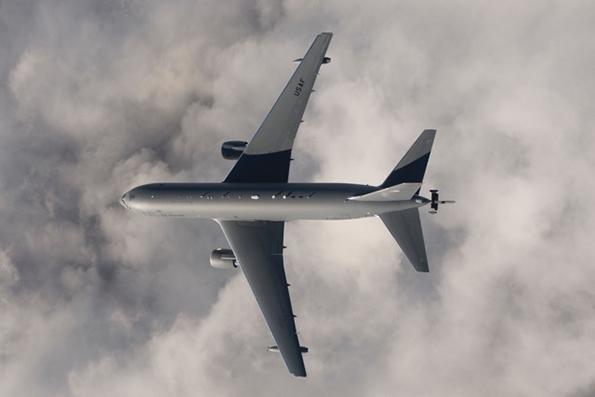 The KC-46 is not just a flying gas station. The aircraft can be configured for passengers, cargo transport and medevac missions. The main cargo floor is designed to carry up to 58 passengers—100 in a contingency. It can also support 54 medevac patients. Up to 10-18 standard 463-L palettes can also be carried on the main cargo floor. Fifteen crew seats are built into the aircraft. 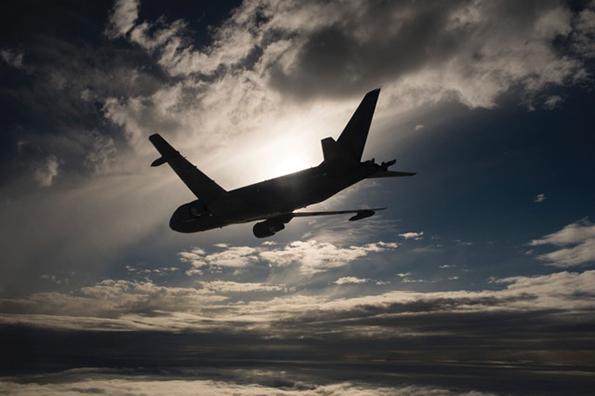 Based on its fixed-price development contract with the Air Force, Boeing is required to deliver the first 18 production KC-46s by August 2017. Company officials previously targeted the delivery for March 2017, but that margin has been consumed by wiring and fuel-system design problems. The Air Force’s contract caps development cost at $4.9 billion, and the service plans to buy 179 KC-46s to begin replacing aging KC-135s. In total, Air Mobility Command operates 455 KC-135s today and will begin retiring old aircraft once it reaches a total of 479 tankers in the fleet (inflated with the KC-46 deliveries). The Air Force plans to buy 12-15 tankers annually, depending on available budget.

EMD-2 is the second of four test aircraft in Boeing’s KC-46 development program for the U.S. Air Force. It is the first 767-2C to be modified to a KC-46 Pegasus standard with the wing-mounted refueling pods, centerline hose-and-drogue system and centerline refueling boom, and it will be used in the coming months for flight-testing and envelope expansion of the refueling configuration.  Read more about Boeing's and the Air Force's hopes for the test program.