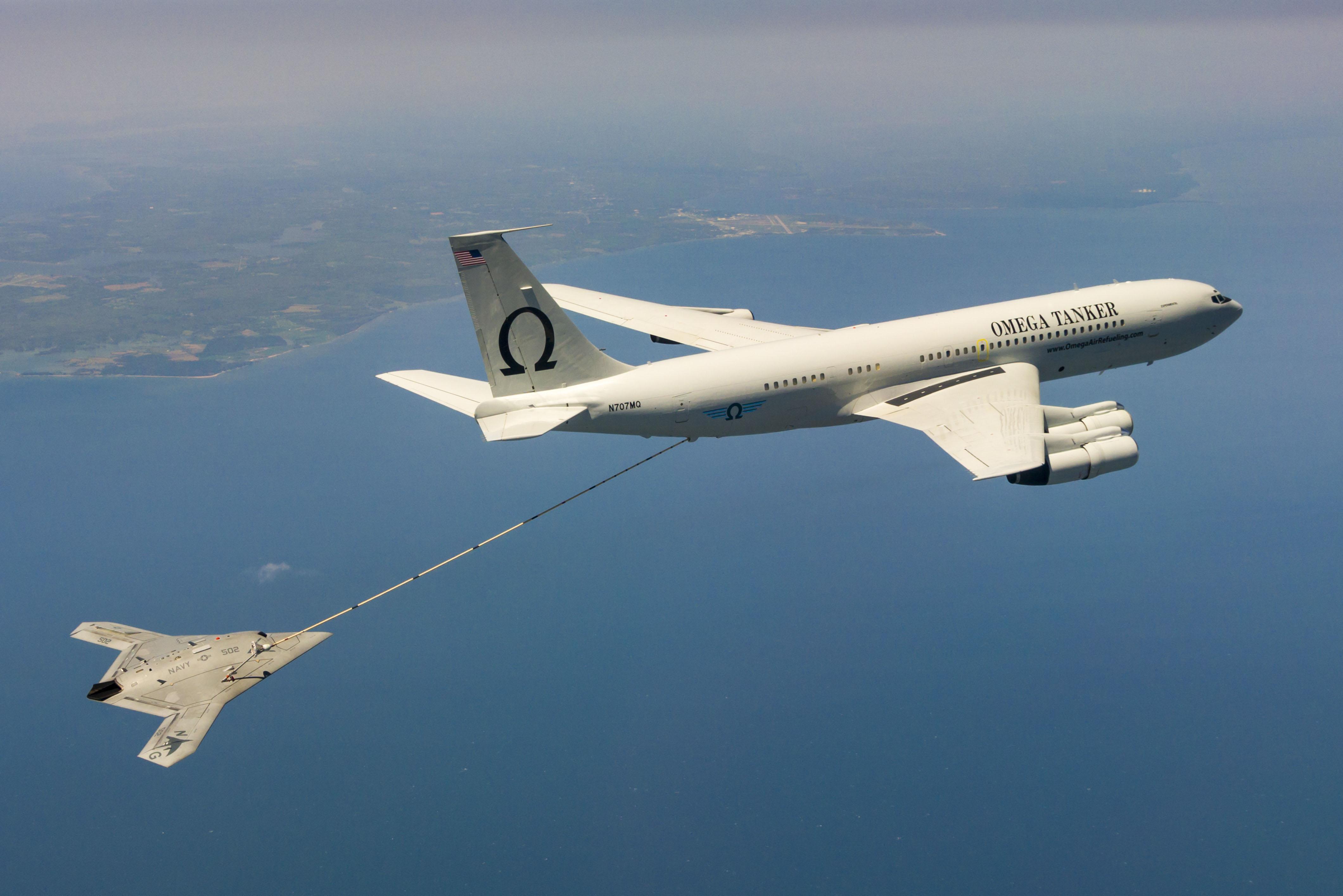 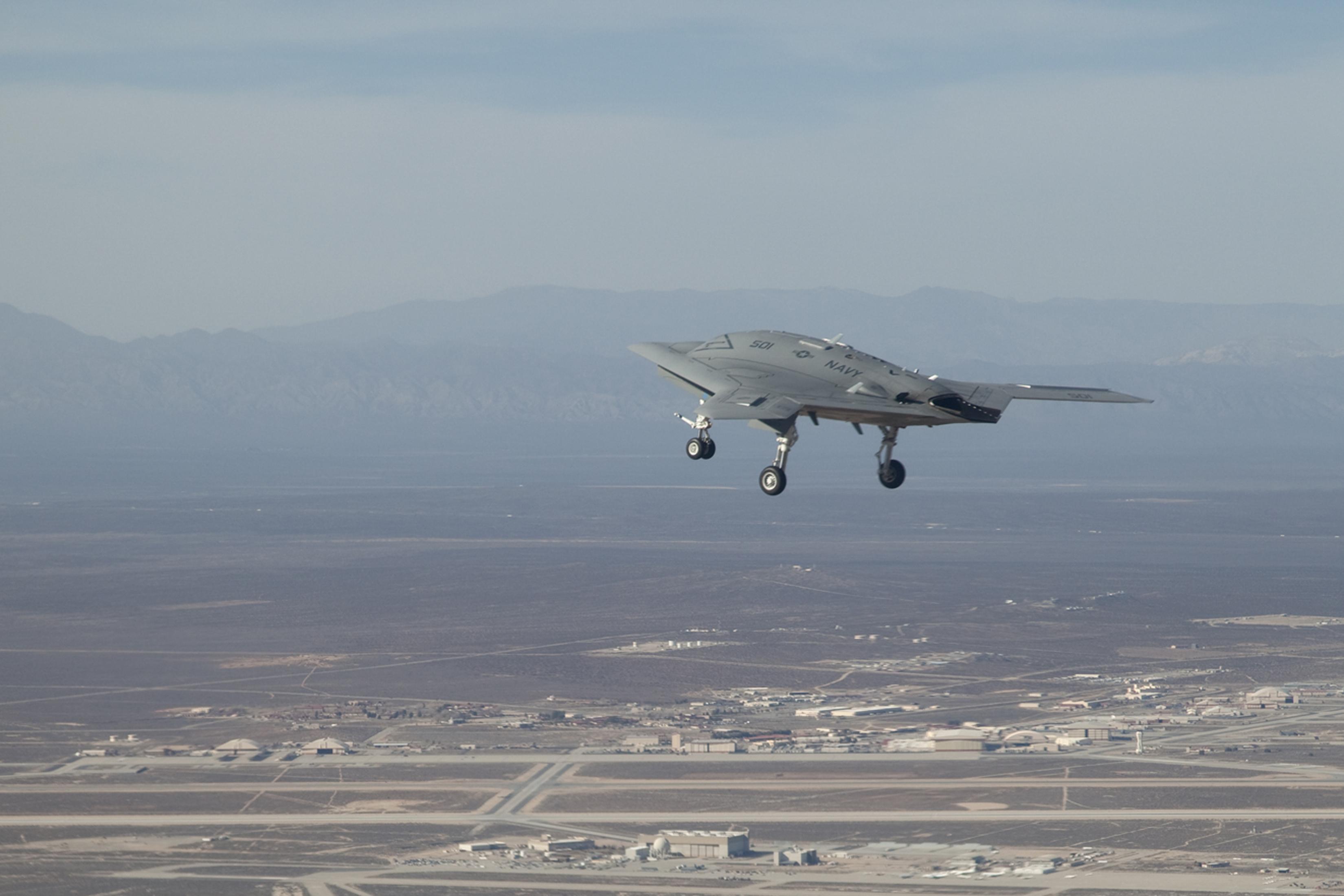 February 2011: The X-47B made its first flight at Edwards AFB, California, on Feb. 4, 2011. Design had begun under the Darpa/Air Force/Navy Joint Unmanned Combat Air Systems program, which was canceled in 2006, but in 2007 the Navy awarded Northrop a contract to build two X-47Bs for the Navy UCAS program. Credit: Northrop Grumman 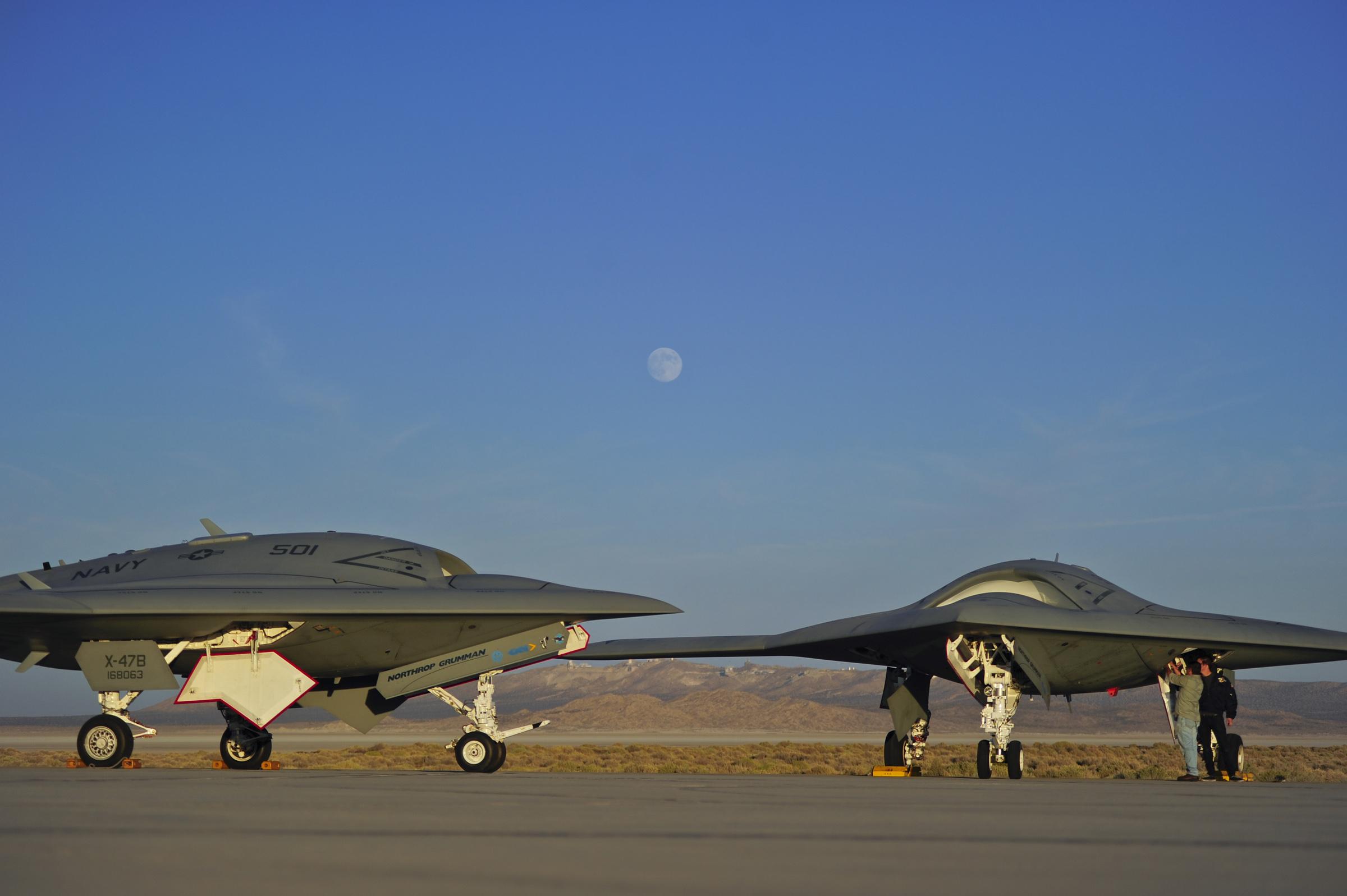 November 2011: The second X-47B, Air Vehicle 2 (AV-2), took to the air on Nov. 22, 2011. Envelope expansion at Edwards AFB was completed that month, in just 16 flights instead of the 49 planned, and the aircraft were trucked across the U.S. to NAS Patuxent River, Maryland, to begin carrier suitability testing. Credit: Northrop Grumman 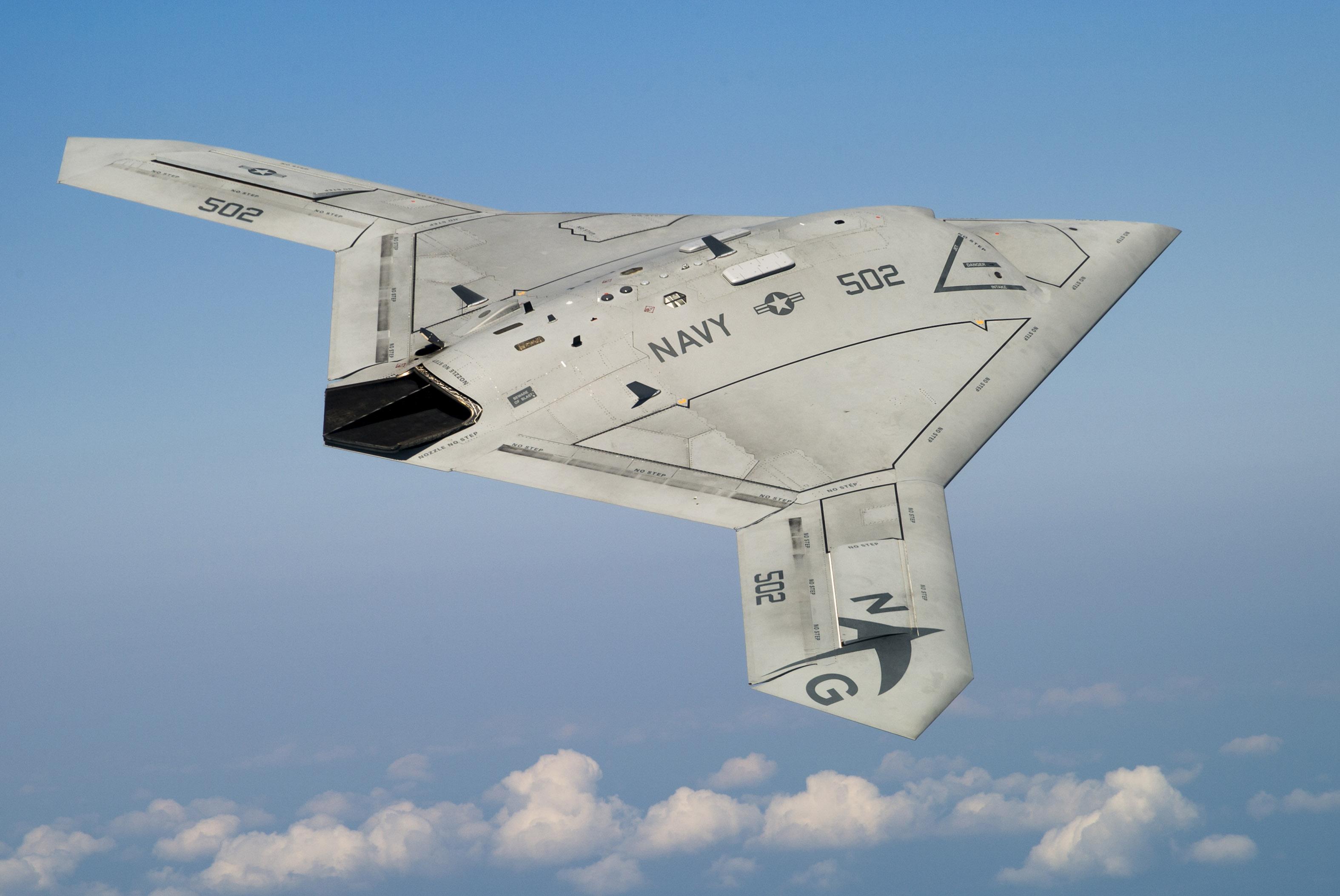 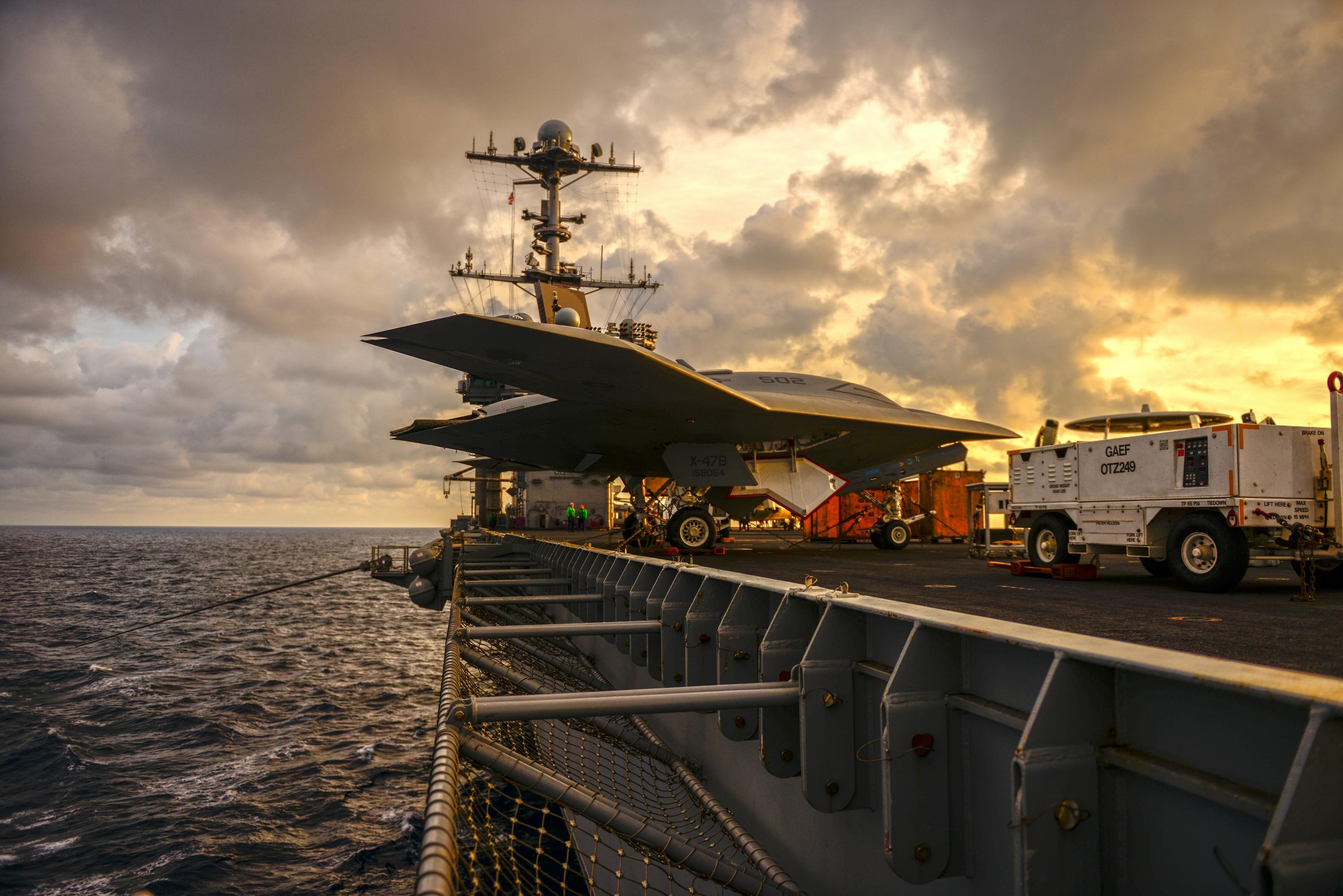 December 2012: AV-2 was winched aboard the aircraft carrier USS Harry S. Truman at Norfolk, Virginia, in late November 2012 for initial deck-handling tests at sea. Over 15 days, the aircraft completed communications checks and tests of the arm-mounted remote control unit used by the deck operator to taxi the X-47B. Credit: U.S. Navy 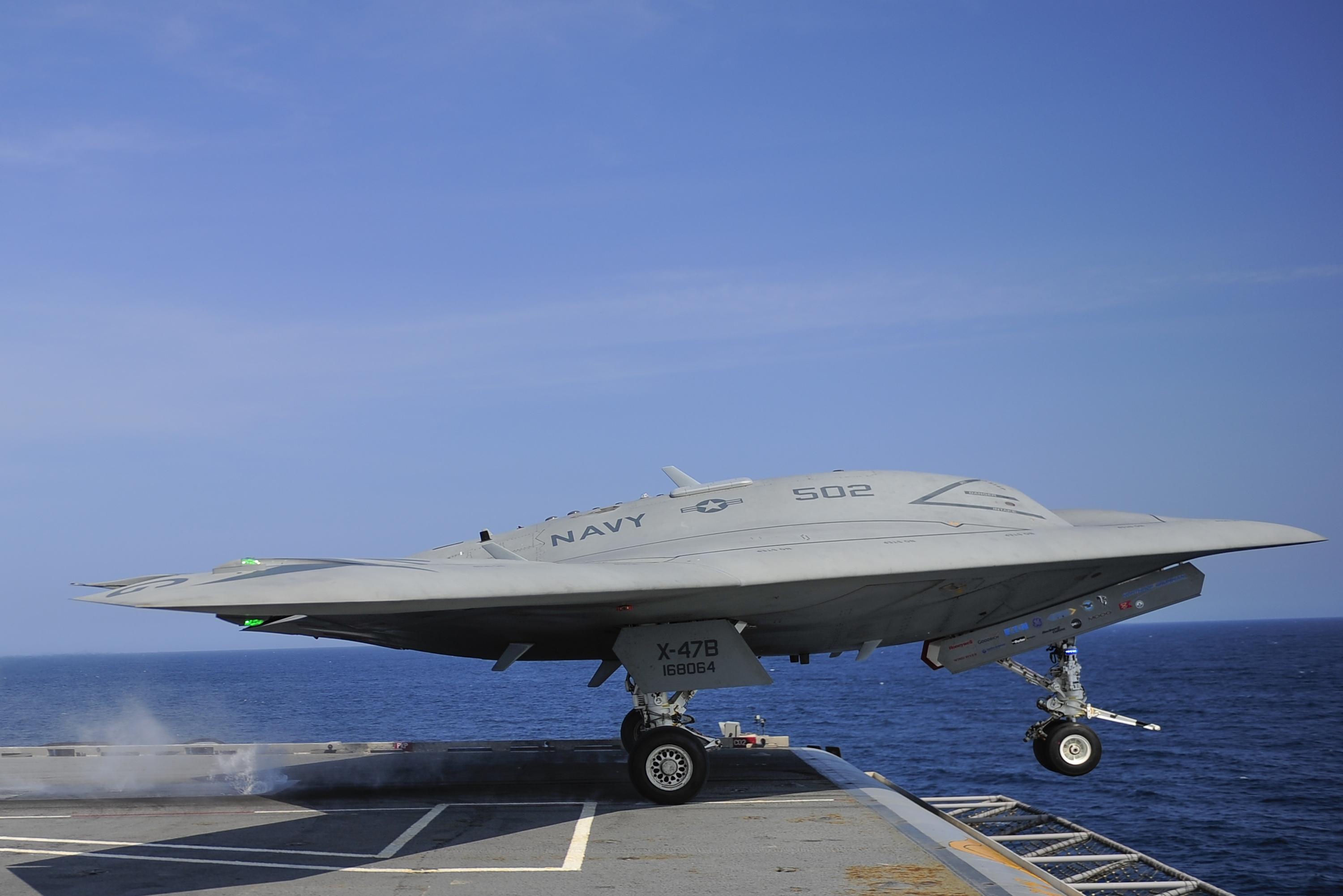 May 2013: On board the USS George H.W. Bush off the U.S. East Coast, on May 14, 2013, the second X-47B air vehicle made the first catapult launch of an unmanned aircraft from an aircraft carrier. Credit: U.S. Navy 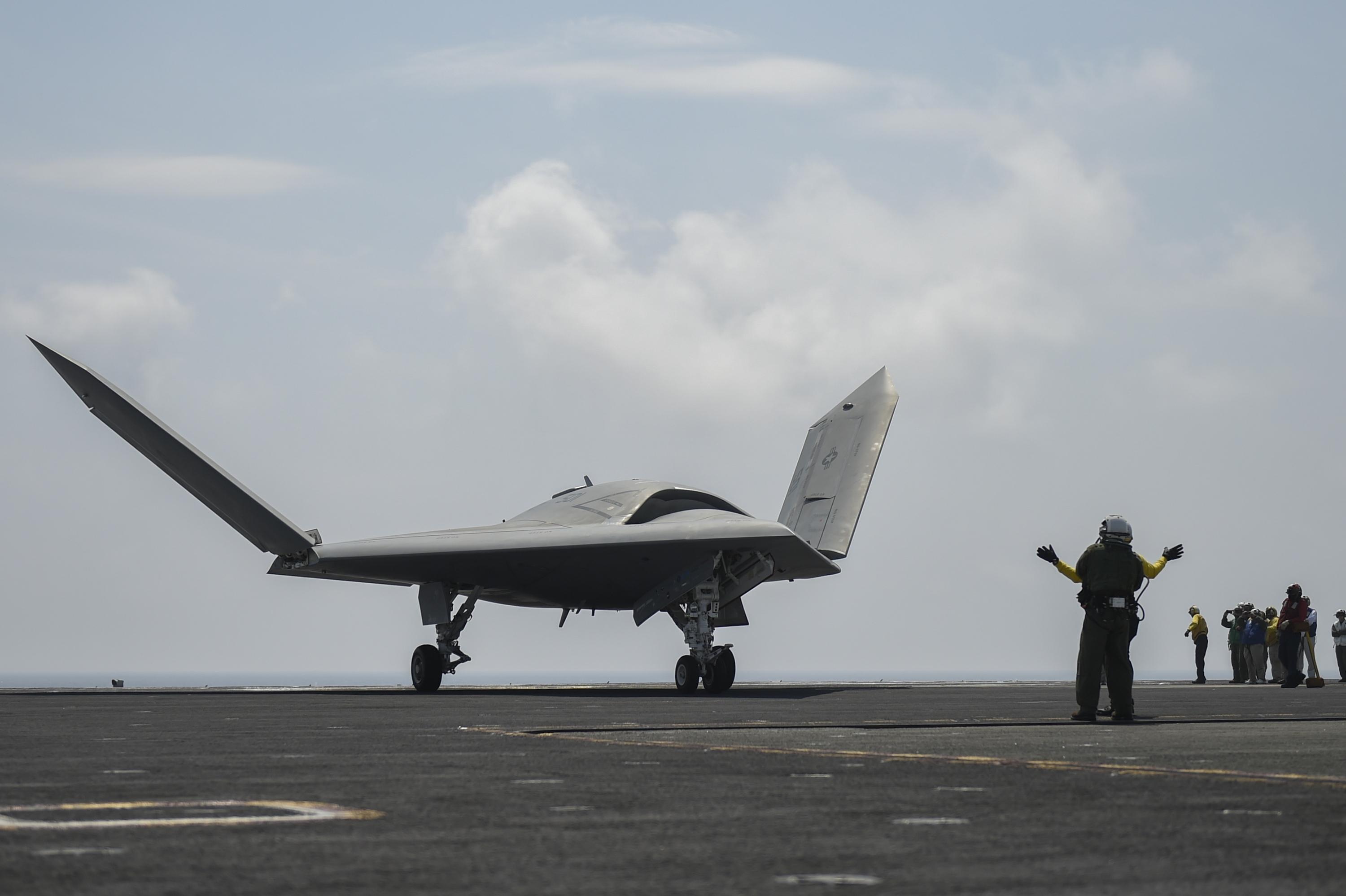 July 2013: AV-2 caught the wire on July 10, 2013, on the USS George H.W. Bush, to make the first arrested landing by an unmanned aircraft on an aircraft carrier. The X-47B was the first tailless flying wing to land on a carrier. Credit: U.S. Navy 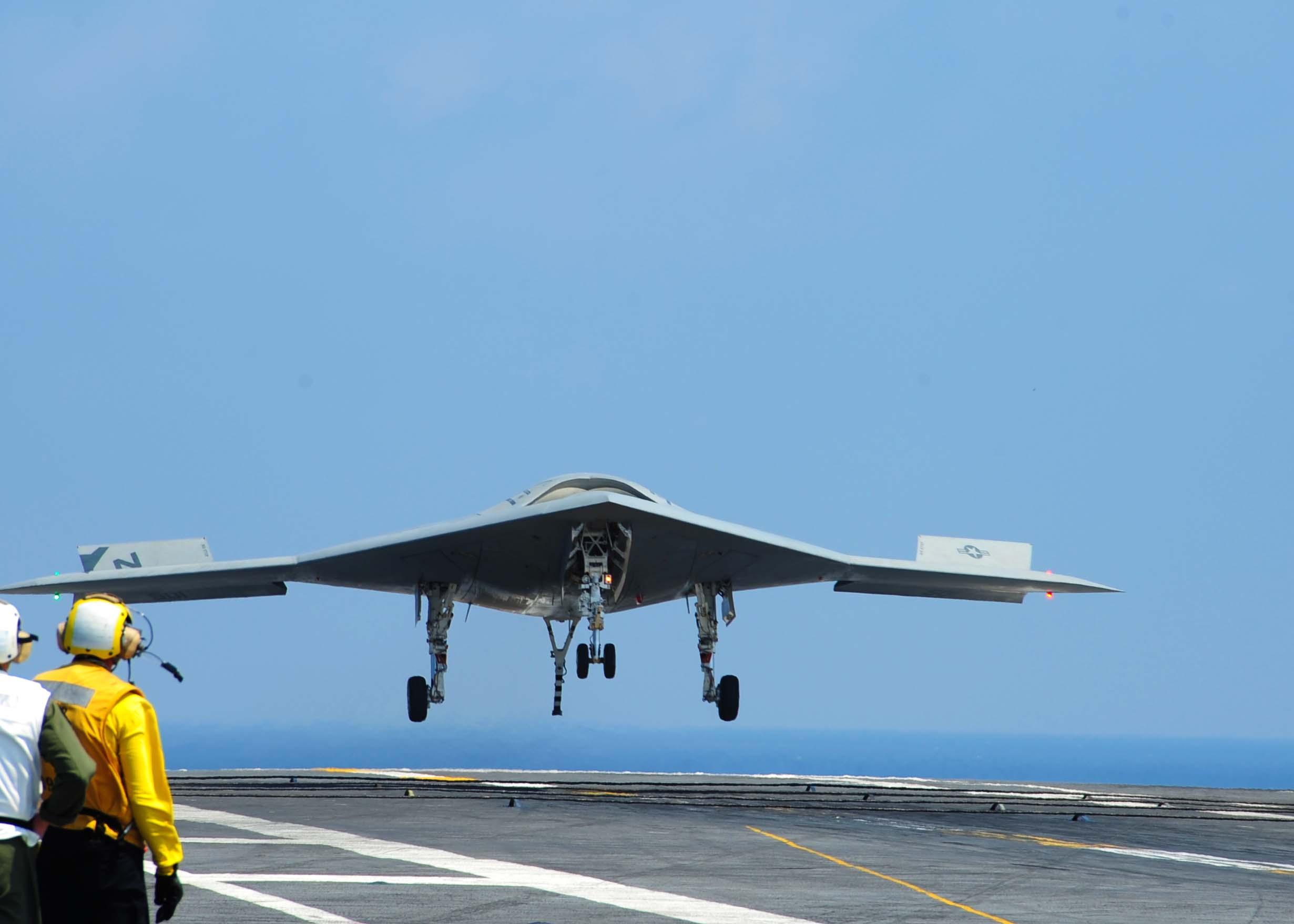 August 2014: The X-47B returned to the carrier deck, operating from the USS Theodore Roosevelt in tests focused on deck operations and maneuvering with manned aircraft in the carrier flight pattern. Credit: U.S. Navy 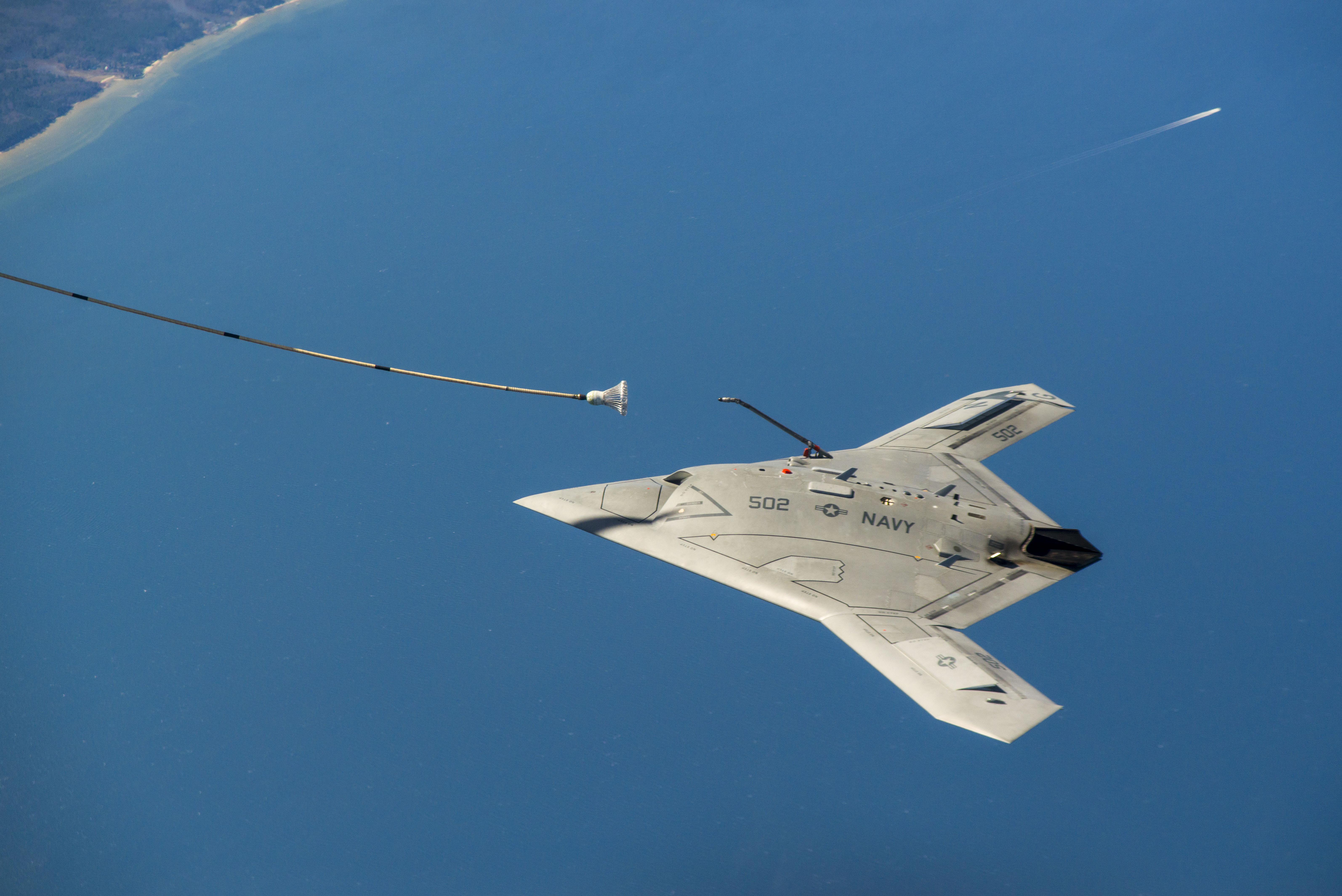 April 2015: In the final phase of the planned program, the X-47B team set out to demonstrate autonomous aerial refueling of an unmanned aircraft. AV-2 was equipped with the fixed refueling probe and completed five engagements with the drogue trailed by Omega’s K-707 tanker. Credit: U.S. Navy 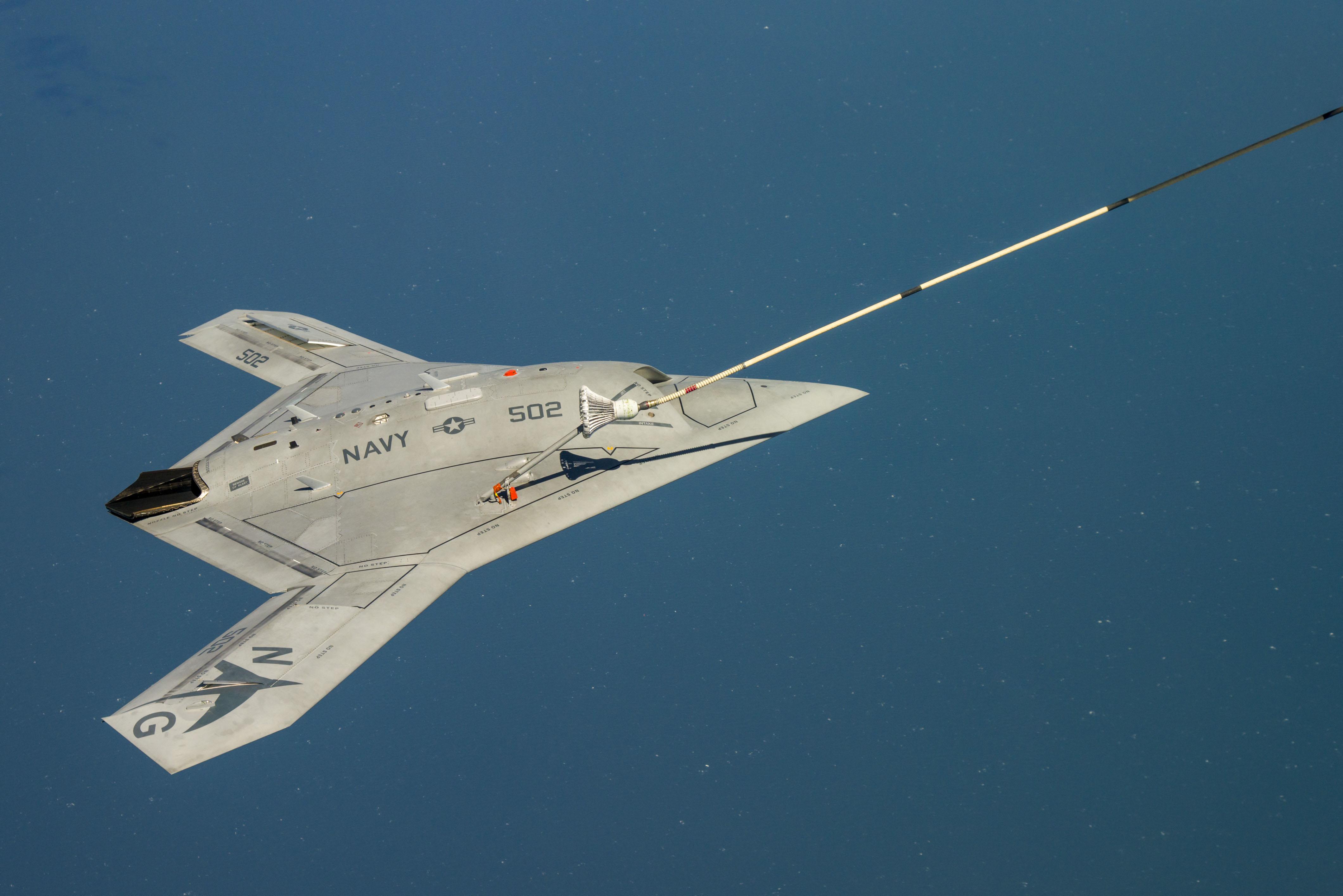 April 2015: On April 22, 2015, the second X-47B rendezvoused with the tanker using precision-GPS relative navigation. The unmanned aircraft then used a camera system to track the drogue and guide the probe into the basket. AV-2 stayed hooked up to the tanker for more than 11 min., receiving more than 4,000 lb. of fuel. Credit: U.S. Navy

We look back over the history-making career of the U.S. Navy's Northrop Grumman X-47B unmanned combat aircraft demonstrators.